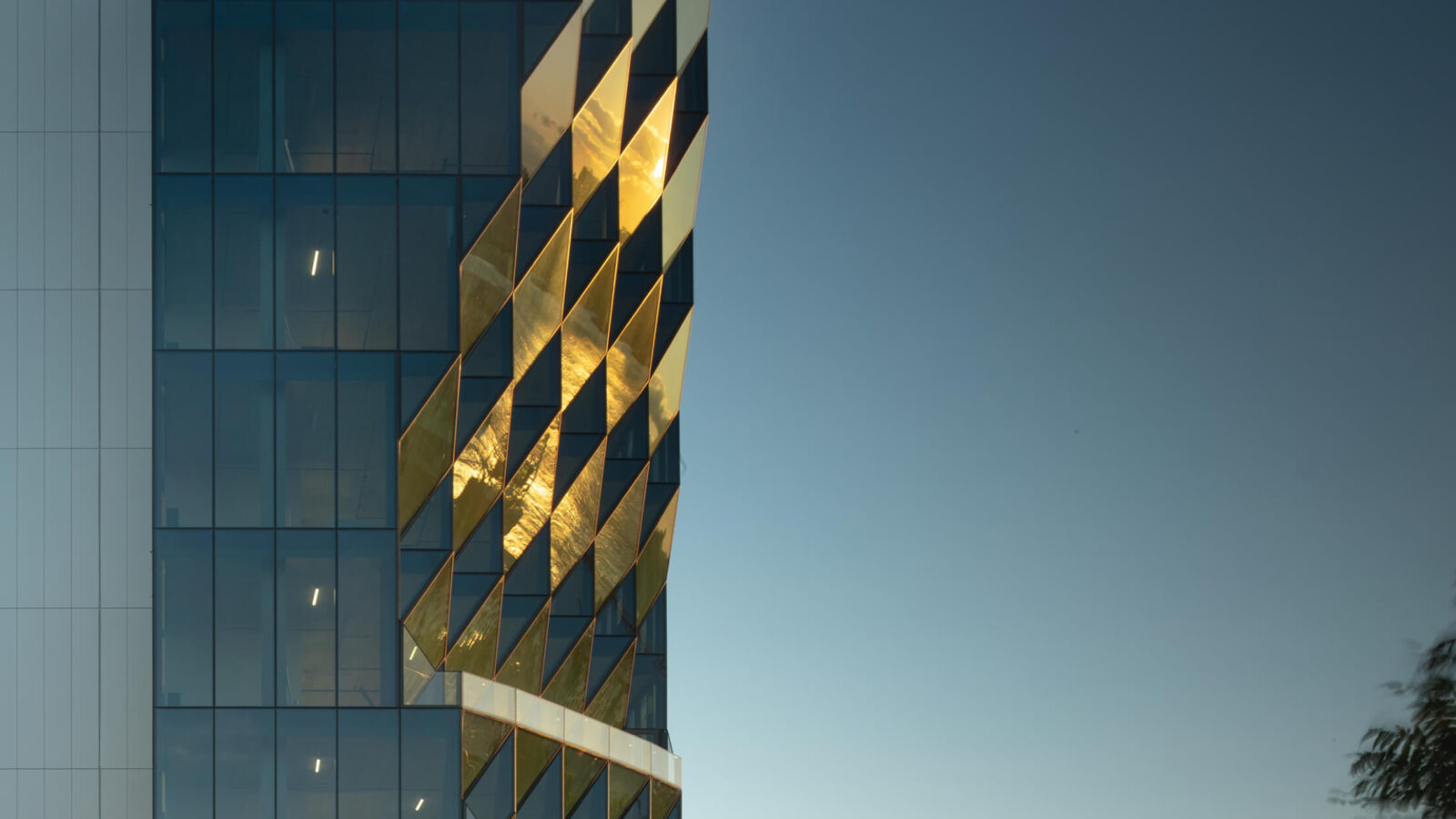 Studio Gang Carves Out a “Solar Curtain” Above the High Line

As Manhattan’s Far West Side rapidly transforms into a high-rise neighbourhood, Studio Gang’s Solar Carve resolves the conflict with sunlight.

Approached from the south, the form of Studio Gang‘s 40 Tenth Avenue emerges from a thicket of modern buildings above Manhattan’s High Line. Framed by its high-rise neighbours, the newly completed office complex announces itself with a tessellated face. Despite occupying a tight setting, the project – popularly dubbed Solar Carve – introduces breathable, sunny urban density.

From the linear park, the 10-storey building meets the eye with a chiseled curtain of glass. Contoured to allow sunlight onto the High Line and to preserve the views from the park and neighbouring buildings, the building’s distinctive form (and its moniker) was shaped by a design strategy that Studio Gang describes as “solar carving.”

Incident angles of the sun’s rays were used to “carve” out the building’s form, ensuring that sunlight permeates the green space below. By the same token, the sculpted form also maximizes interior floor area. Inside, the three-dimensional facades bookend open office spaces with angular corners. The intricate angling also reduces solar heat gain and blocks glare, creating more comfortable conditions inside and out.

Diamond-shaped glass panels are surrounded by smaller triangular pieces to create the signature curtain wall. Placed perpendicular to the concrete slab, the four triangular panels that support each of the tilted diamond shapes create standard stack joints. The angled forms open out to balconies, while a larger rooftop space adds another outdoor amenity to office workers.

Catching the changing light throughout the day, the curtain wall’s faceted form is accentuated in the play of sun and shadow. Along a sleek – and nearly transparent – glass tower, there are moments of surprising depth and colour.

Tenth Avenue is another story. Solar Carve’s longer western frontage faces the street as a rectilinear office block. From here, notes of the cutaway facades at the southeast and northwest corners merely hint at the sculptural presence that meets the High Line. 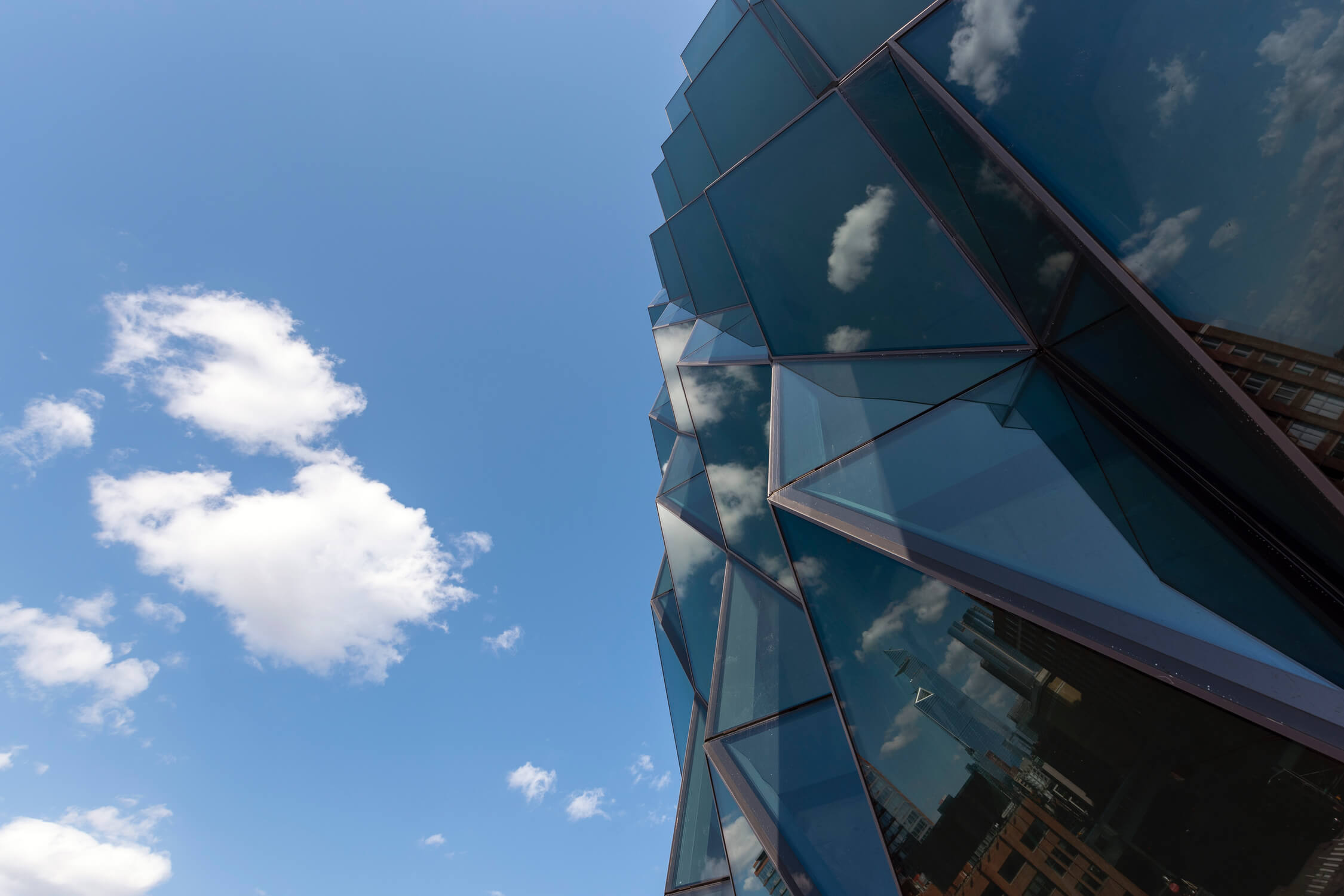 And yet, the massing feels pleasantly resolved from any vantage point, belying the project’s technical complexity. (As reported by The Architect’s Newspaper, 12 types of glass were used to create the curtain wall). For a building defined by its kinetic energy, there’s a sense of tranquility in all those glass shapes.

Does it live up to the billing? As a precedent for working with sunlight in high-rises environments, the project might serve as an important architectural milestone. And when the sun hits those tesselated facades just so, it’s hard to argue that the excitement wasn’t worth it.

As Manhattan’s Far West Side rapidly transforms into a high-rise neighbourhood, Studio Gang’s Solar Carve resolves the conflict with sunlight.