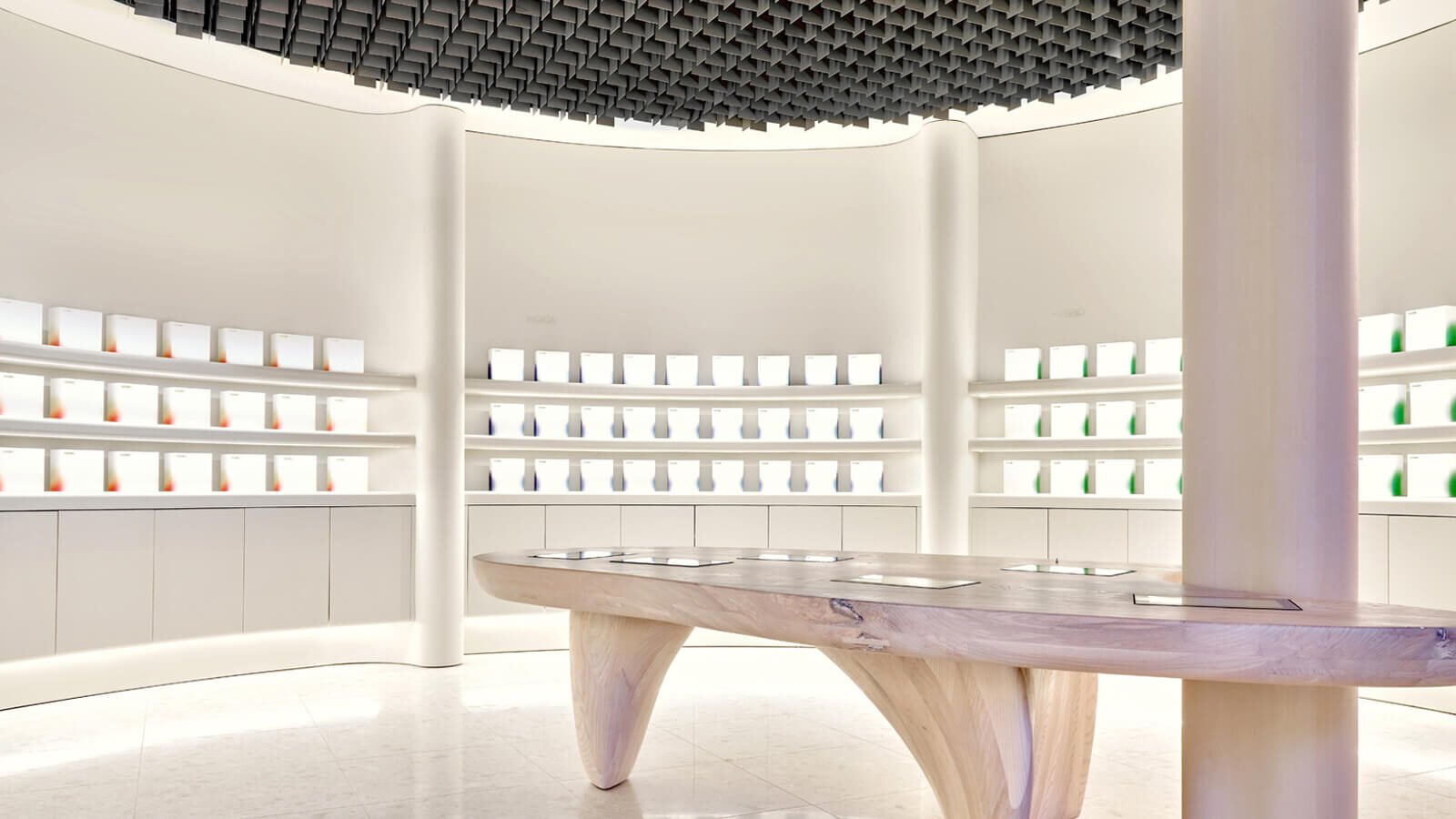 This experimental and experiential Toronto flagship lands “somewhere between a laboratory and temple.” 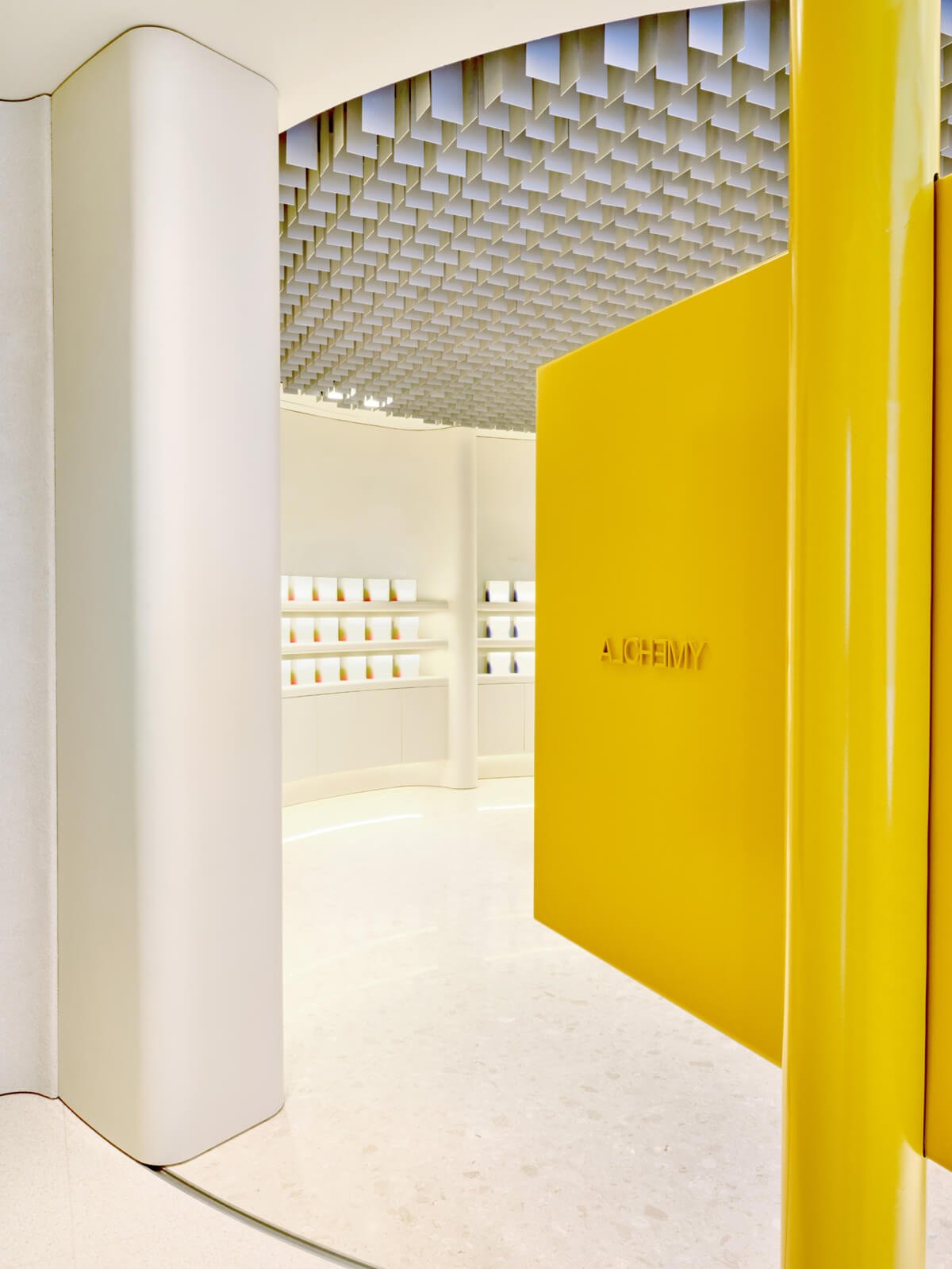 The dispensary — a typology nearly synonymous with the Canadian metropolis — has seen a swift and striking rebranding since legalization, and Ferrari’s enveloping interior follows suit. Dubbed “Canada’s first highly immersive cannabis retail store,” the space is “somewhere between a laboratory and temple,” according to Ferrari. 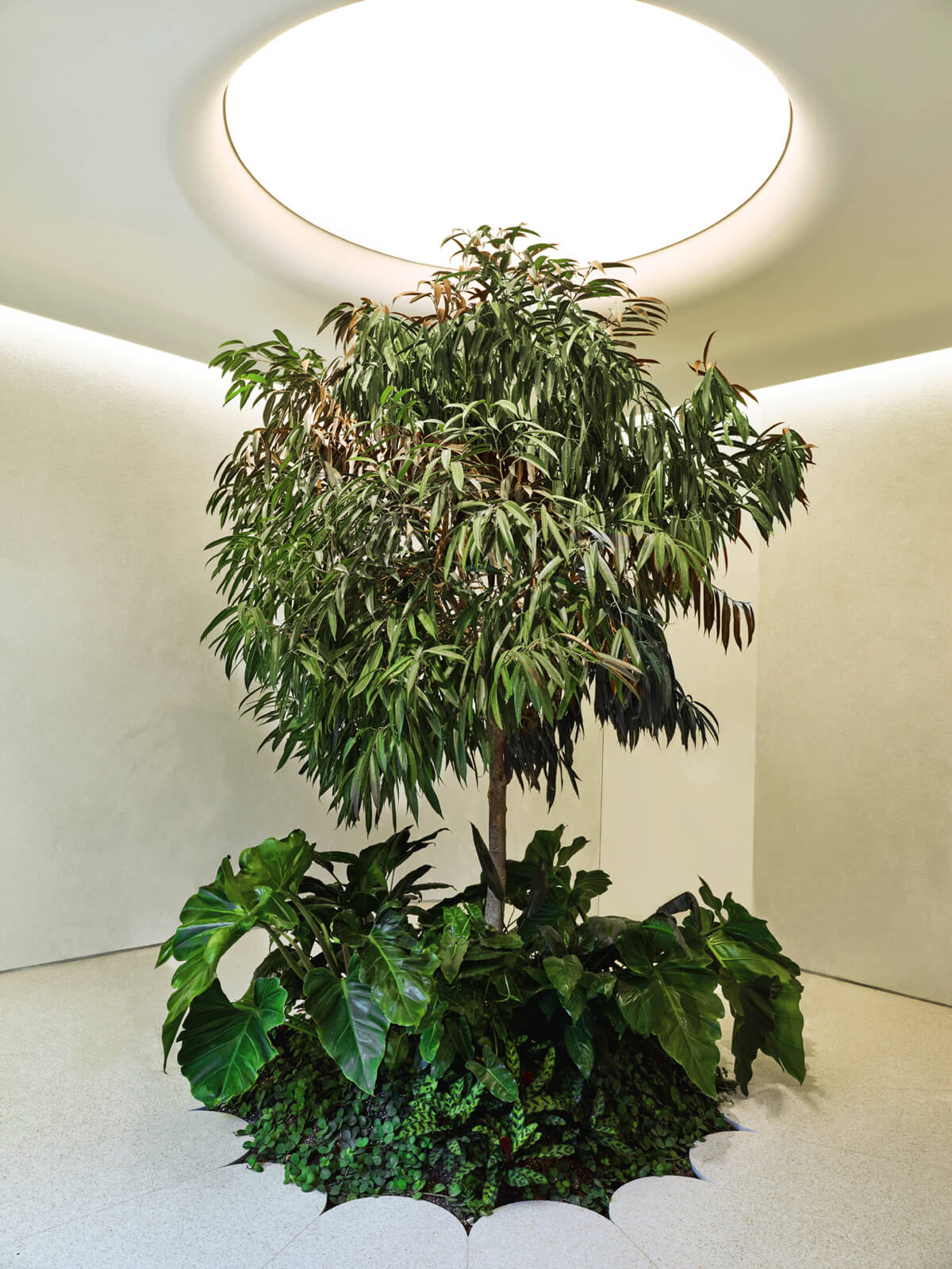 This oscillation between the monastic and scientific is evident as soon as you step inside. A grand tree in the arrival area — illuminated by a glowing oculus and framed by a scalloped terrazzo floor that peels back at the plant’s base — transitions into a rotunda grounded by a carved whitewashed ash table. 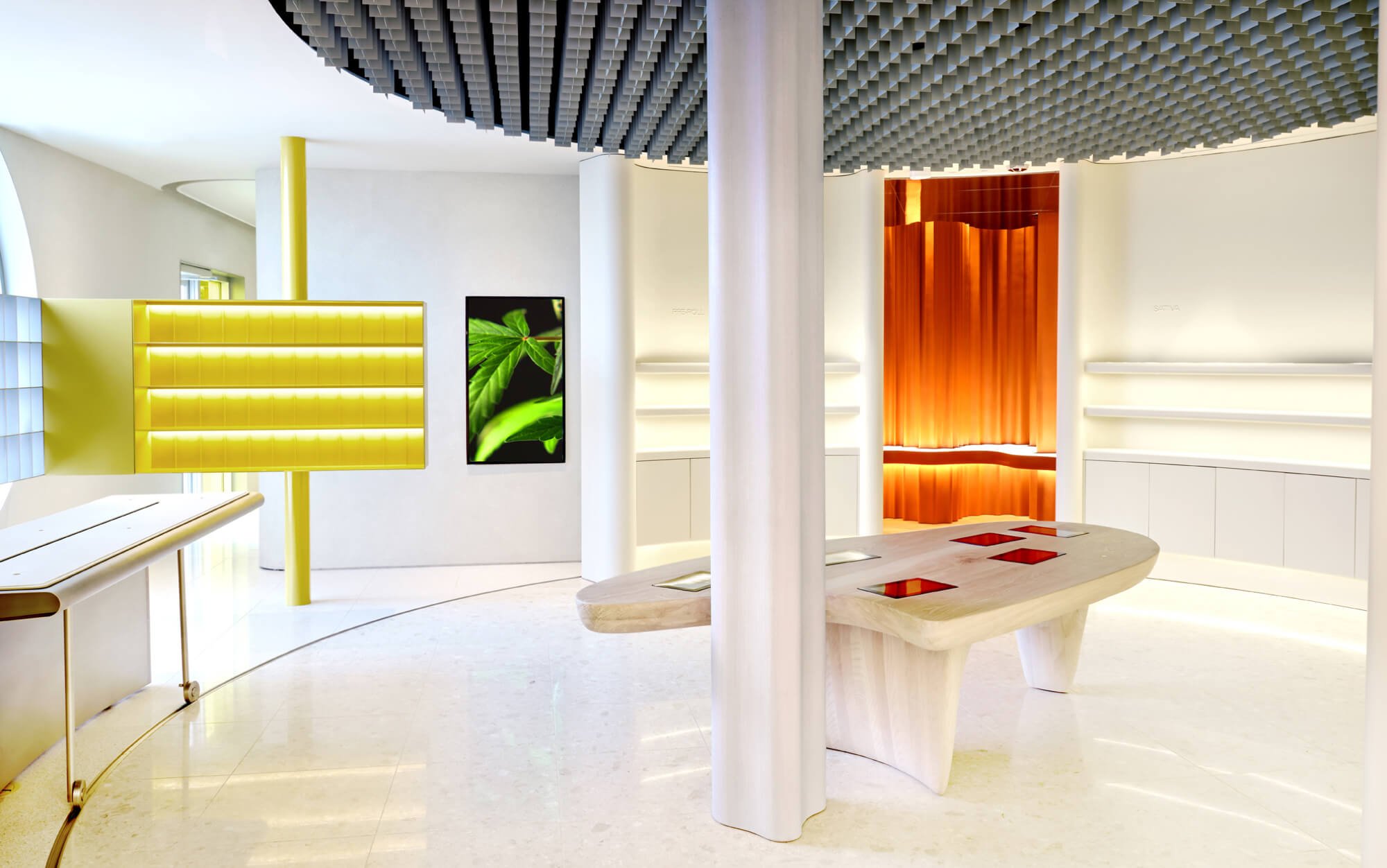 Beneath a canopy of aluminum fins, custom Corian shelves with bulbous edges follow the profile of the space; they present a curated selection of Alchemy’s wares. 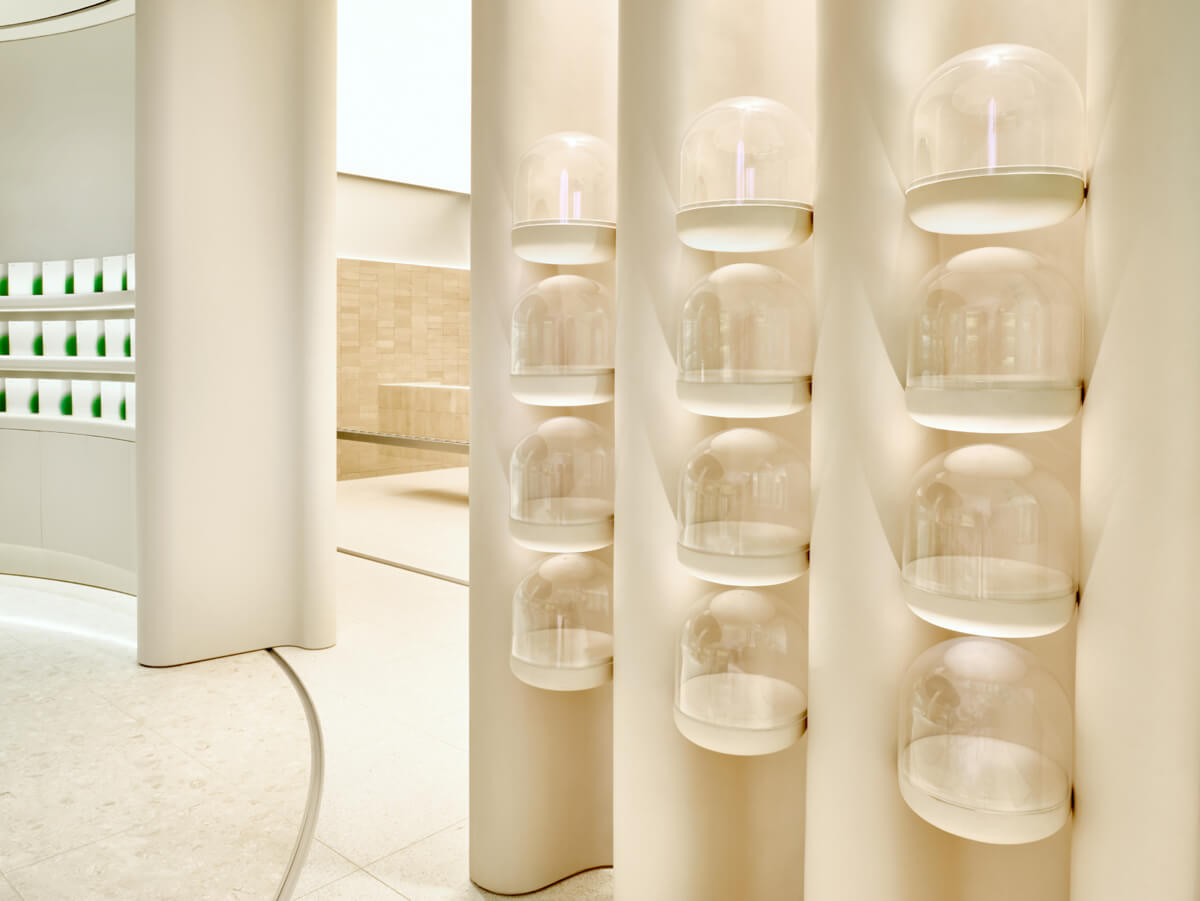 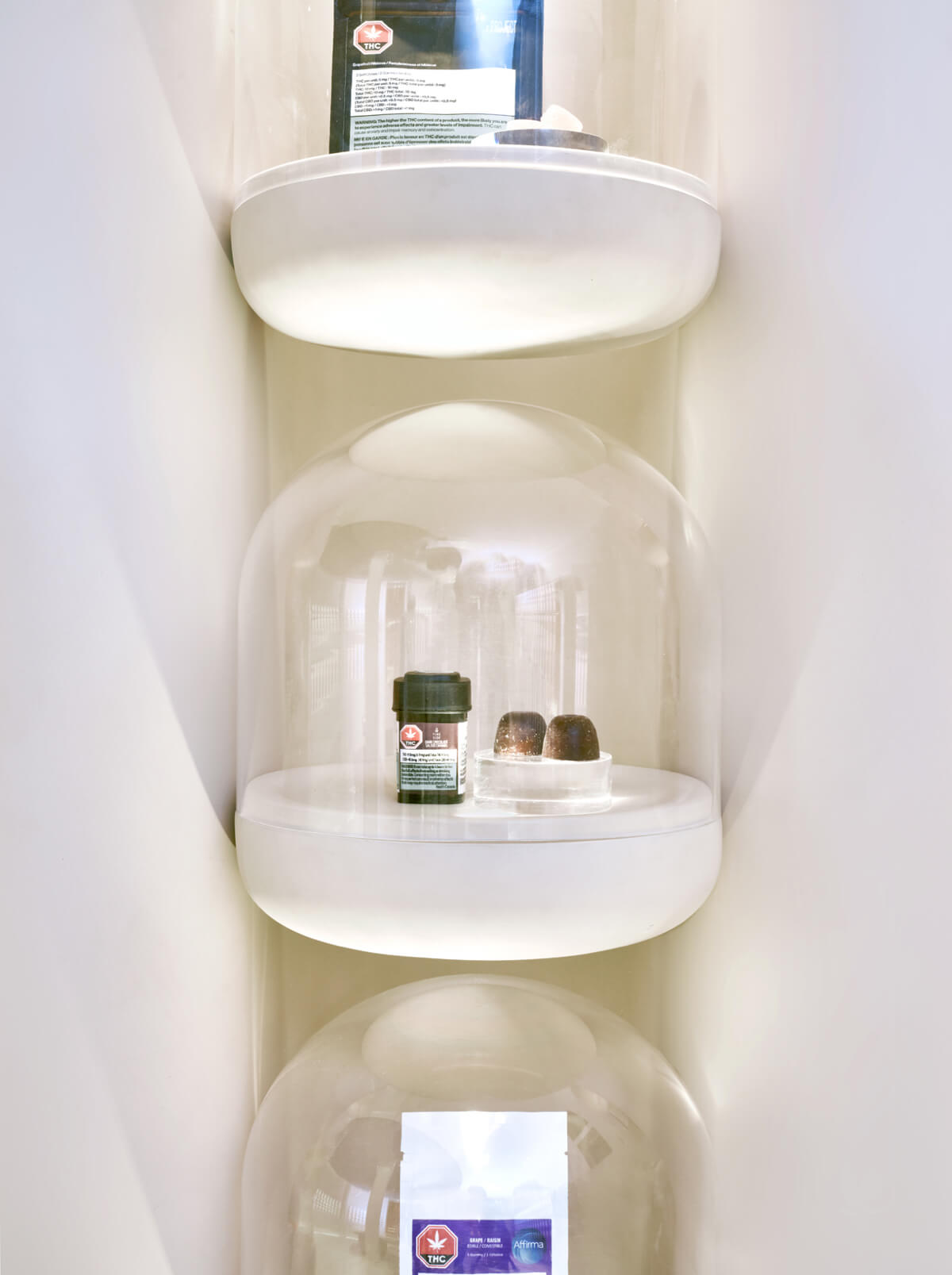 The gentle curves of the plaster walls continue throughout, transitioning into a series of niches containing bespoke vessels. These bell jar–like vitrines stacked in floor-to-ceiling alcoves display the brand’s selection of edibles as if works of art. 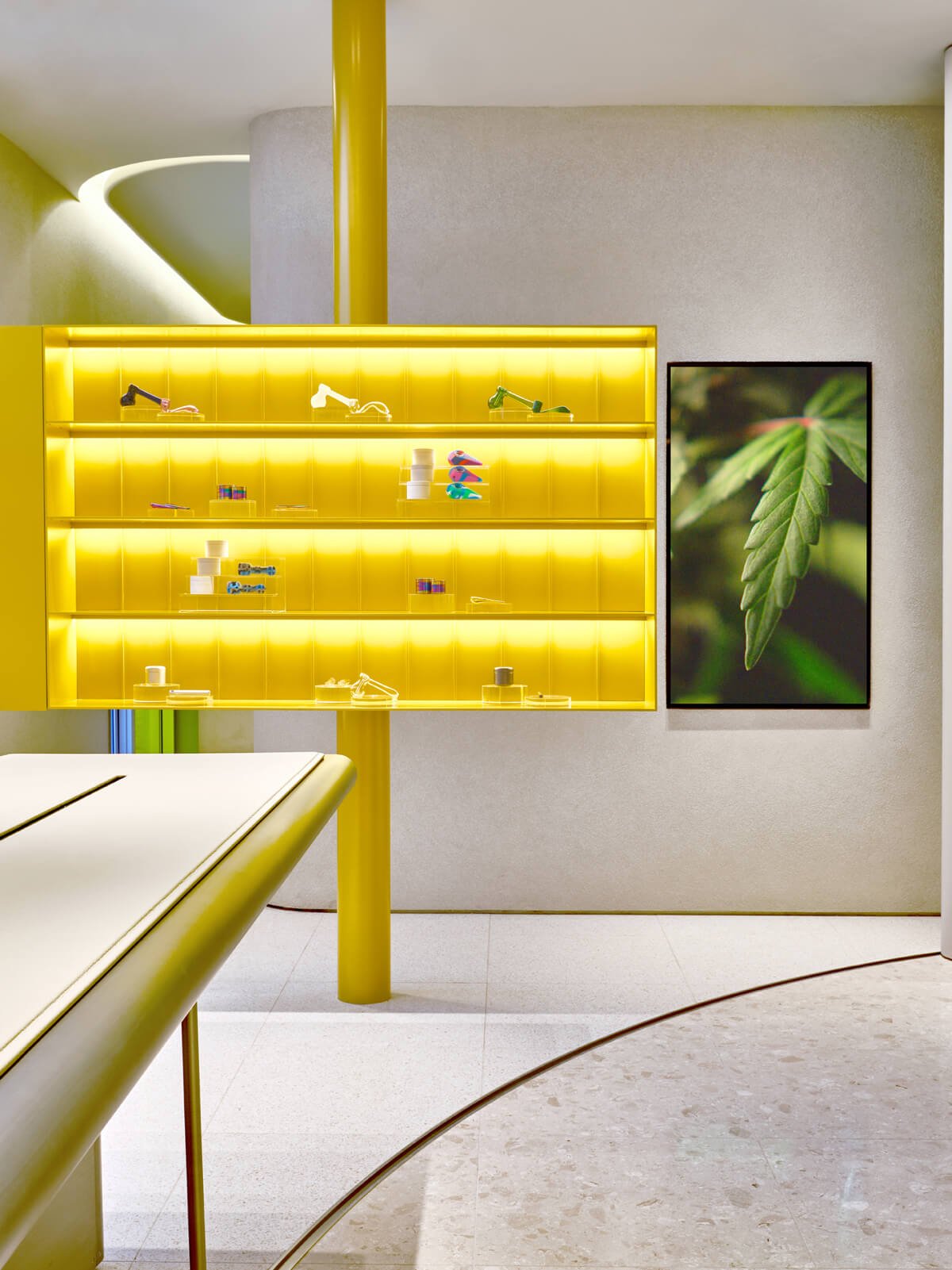 Across the room, a metal desk on wheels is set into an inlaid track, appearing almost mobile. Behind it, a suspended metal shelf features curated compartments that celebrate Alchemy’s similarly minimal packaging. Its yellow lacquer surface faces the arrival area to not only give visitors a graphic point of access but to also expertly shield the interior (according to dispensary guidelines). 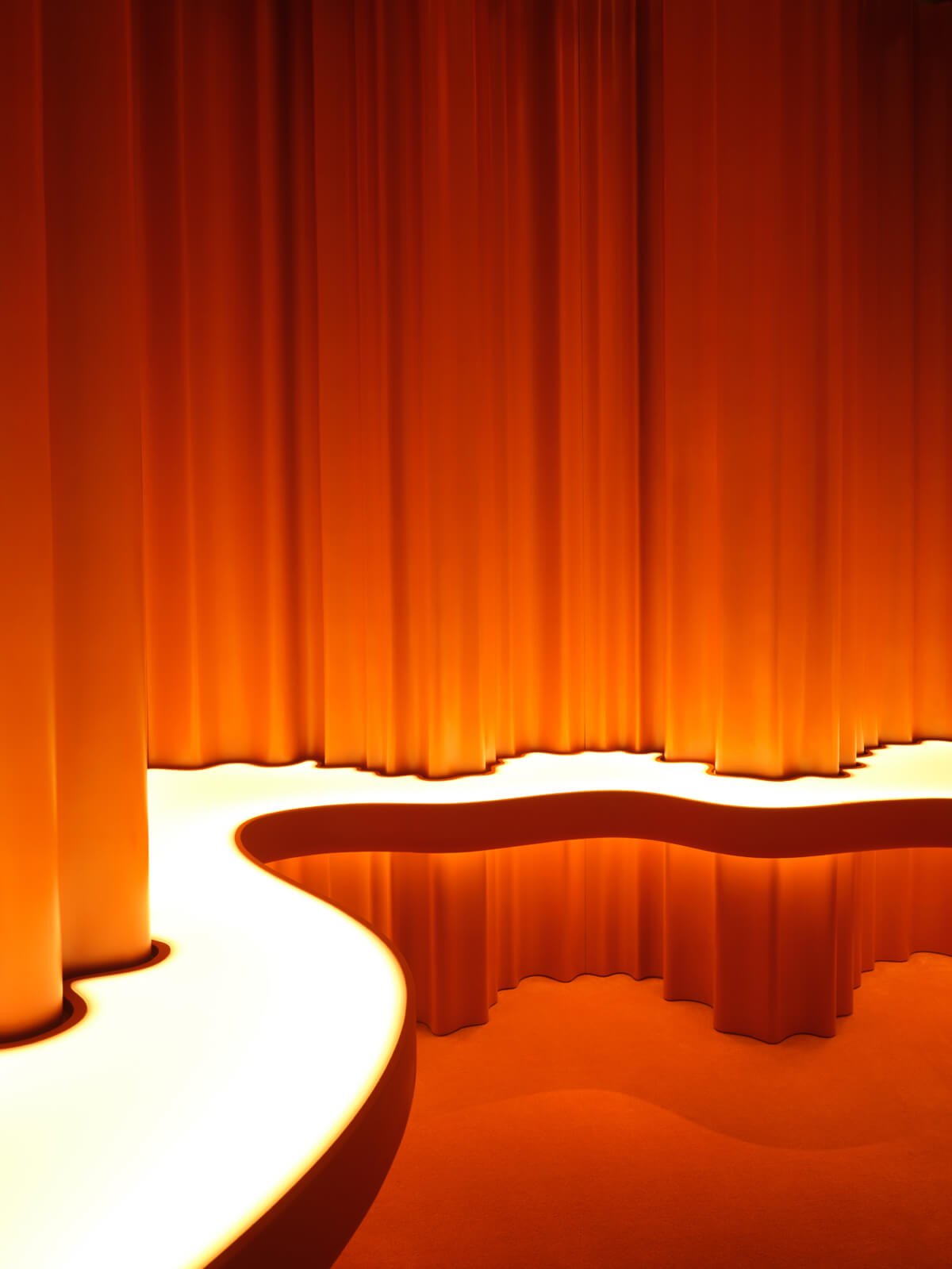 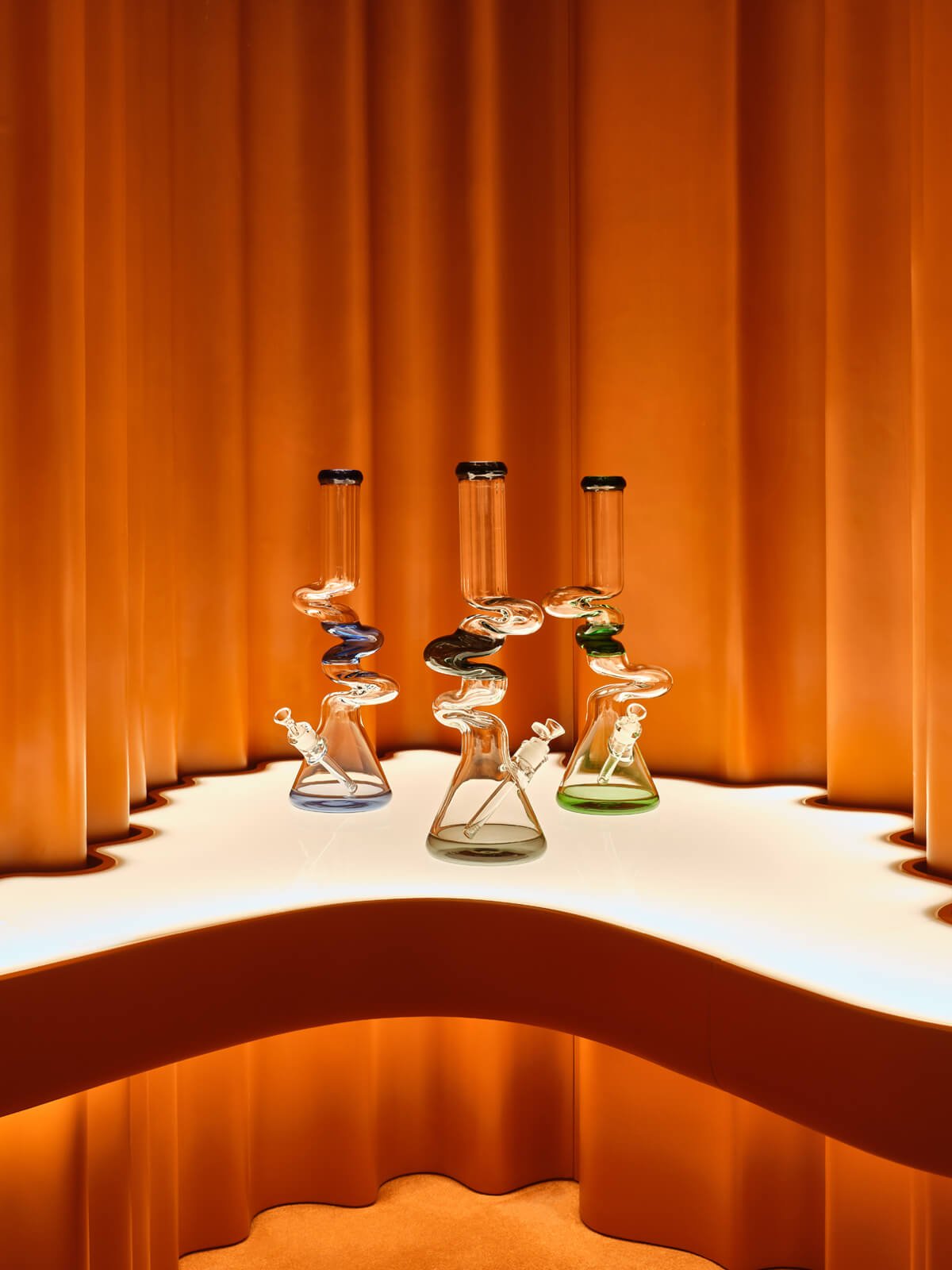 Two openings in the contoured room help achieve what Ferrari calls a “serene environment with energetic bursts.” One leads to the accessories area, lined in an undulating resin “curtain” bisected by a back-lit shelf that matches the wall’s contours. The gestural surface terminates in a luminous cove within the mirrored stainless steel ceiling, echoing the subtle wash of light below. (If you’re getting Twin Peaks vibes, the nod to David Lynch is intentional.) 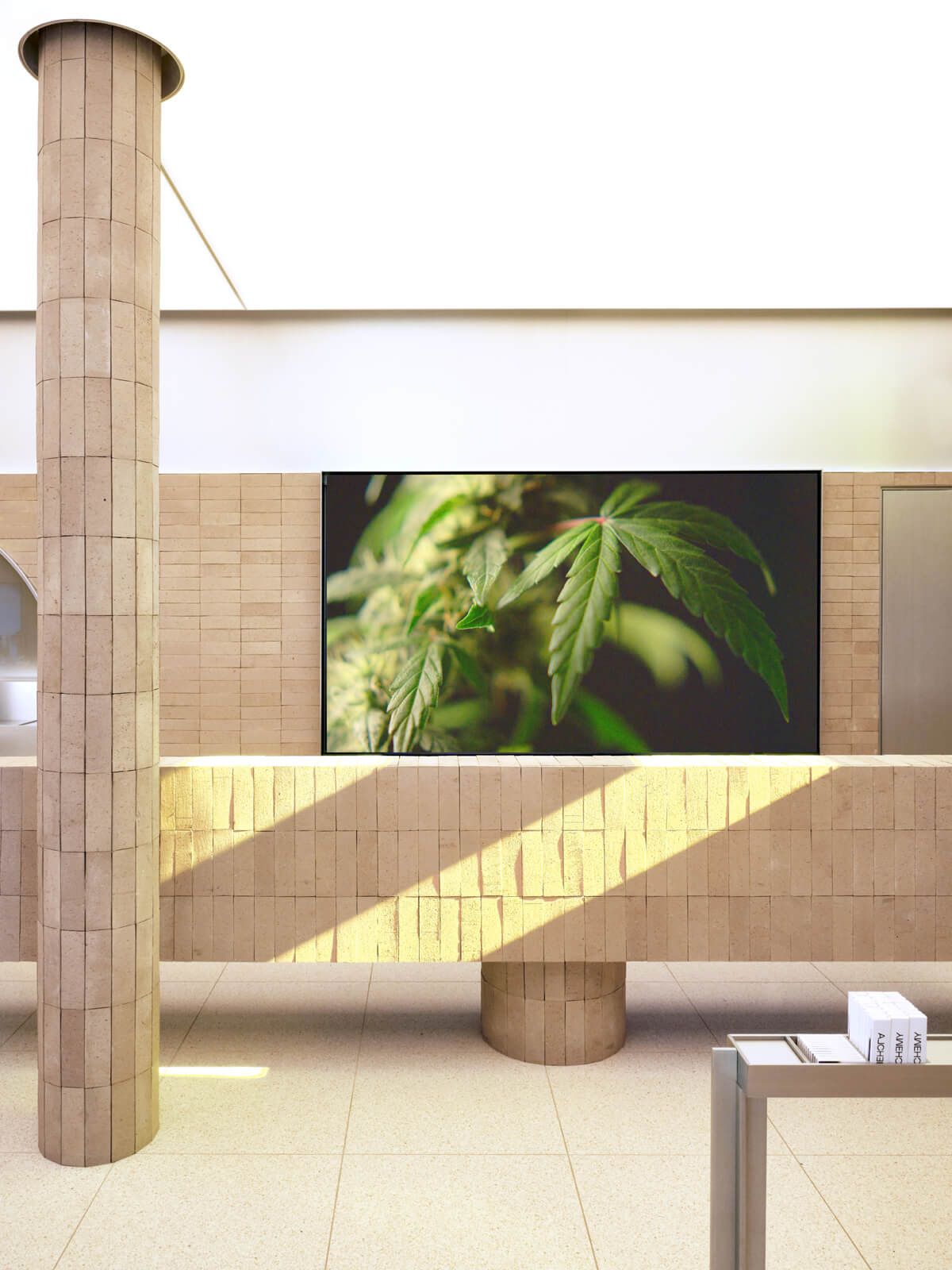 The other opening frames the checkout, defined by terracotta brick–clad columns, walls and a long low-slung counter. Like the arrival, this area is lined in a number of screens that relay a rotating selection of evocative visuals. Two ultra-thin, linear fixtures add an industrial edge. 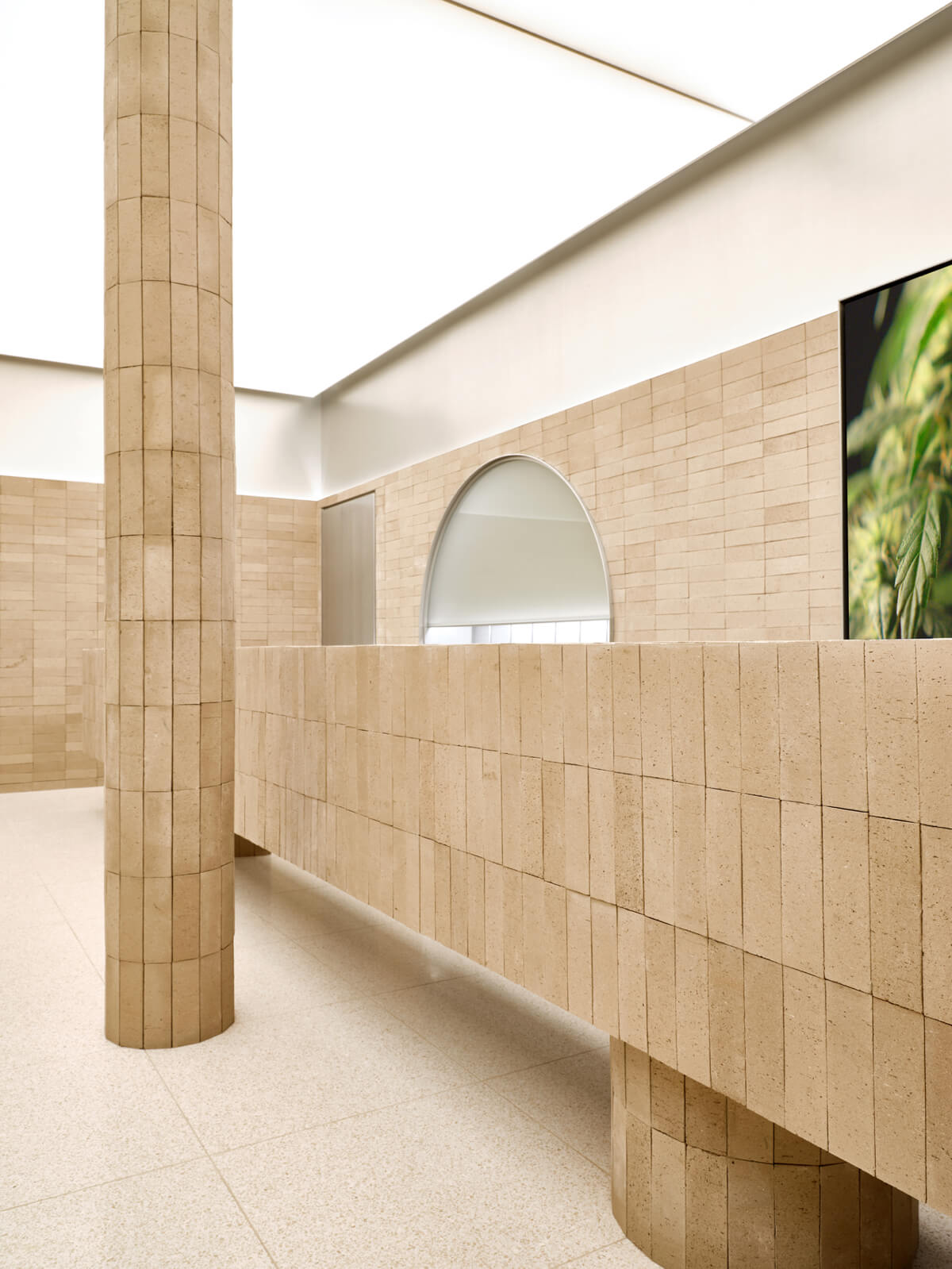 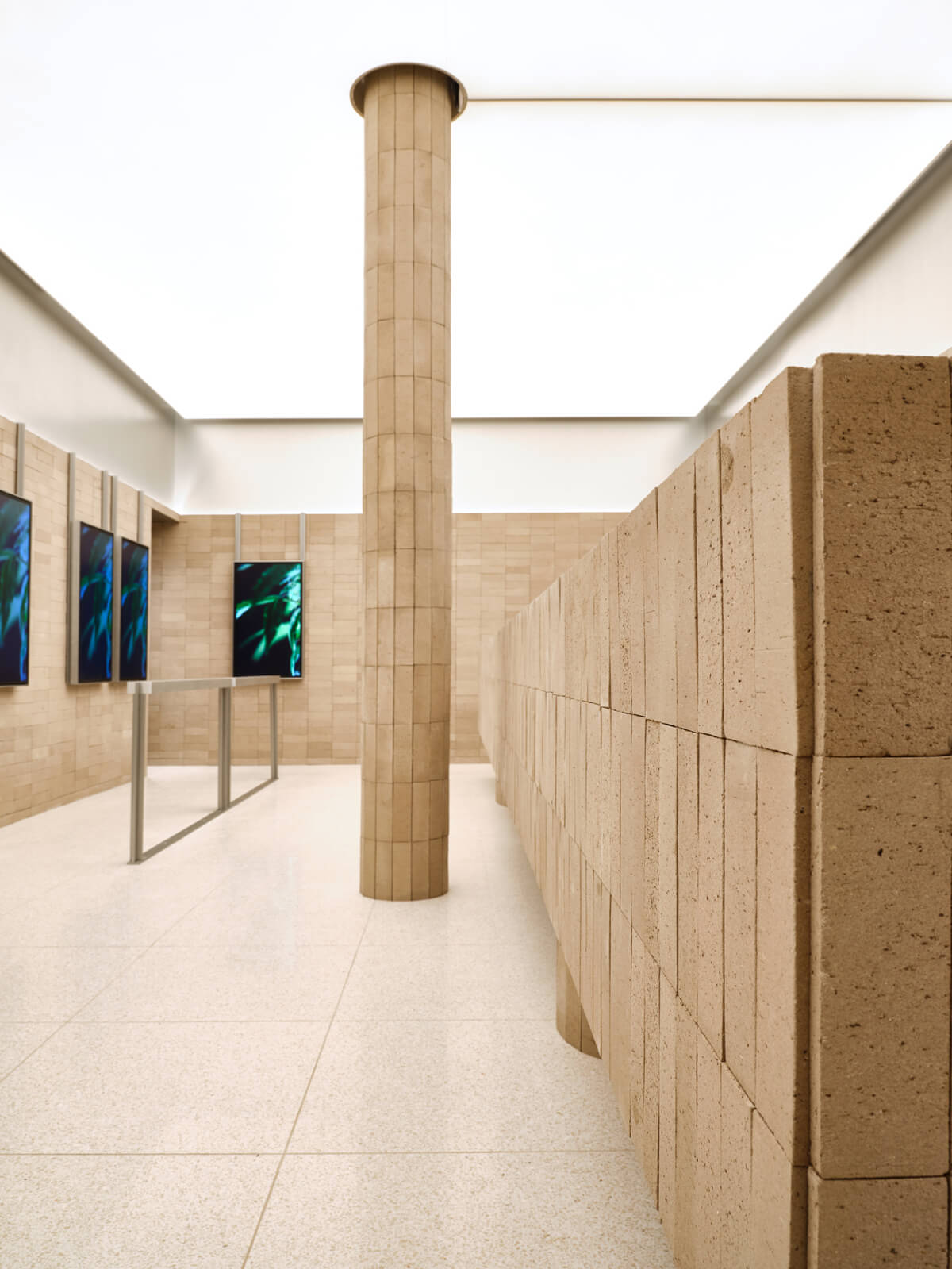 It all seems to shimmer in an ethereal light, expertly concealed within fixtures, built-ins and custom features. In this way, each object — whether a bong or a bud — is elevated to museum quality. 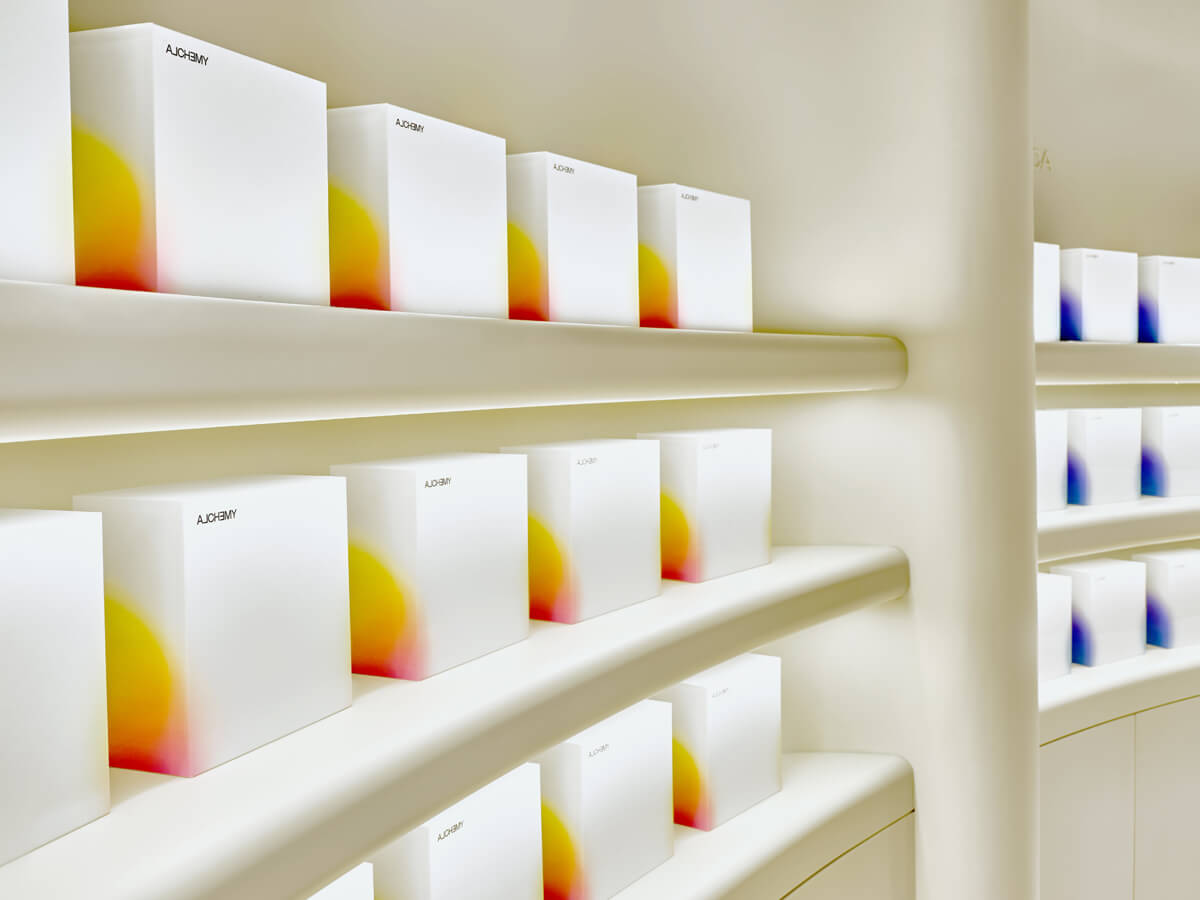 “The best retail environments,” Ferrari adds, “are about celebrating the human experience and presenting highly considered multi-sensory environments.” As far as flagship enterprises go, Alchemy sets the bar like no other.

This experimental and experiential Toronto flagship lands “somewhere between a laboratory and temple.”