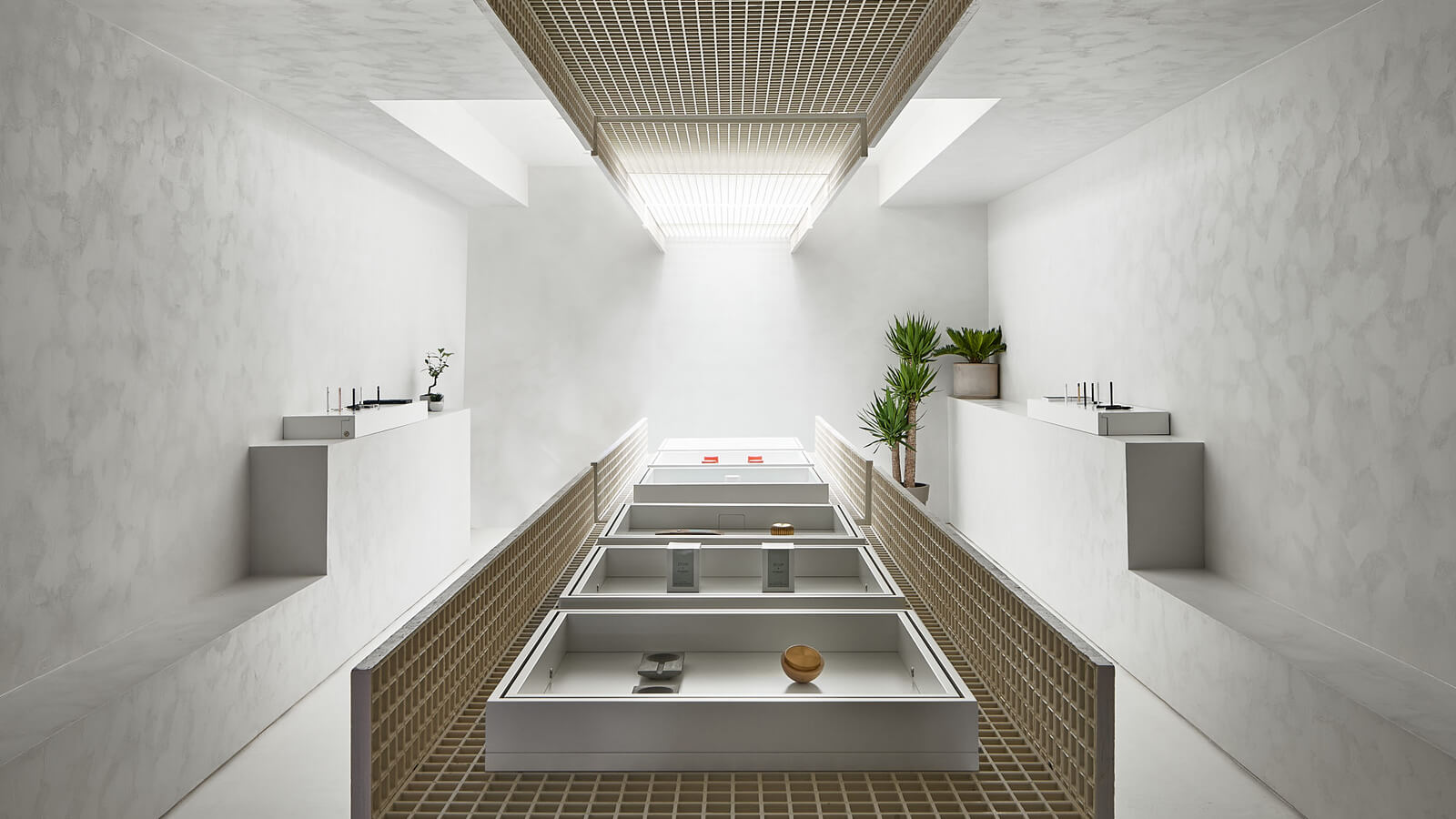 StudioAC Elevates This Toronto Dispensary with a Minimal Edge

Replete with industrial grating and a monastic ambiance, Edition’s new flagship is all smoke and no mirrors.

Following Canada’s legalization of marijuana on October 17, 2018, a new typology began rapidly emerging in many of the country’s urban centres: the dispensary. Far from the seedy spaces of recent memory, these interiors deliberately set themselves apart from their forebears, mixing ultramodern features in an attempt to “break the stigma of cannabis retail through design, quality and impeccable service,” according to entrepreneur Ryan Roebuck. These new locales also bridged two previously separate spheres: the places which traditionally sold accessories used for recreational consumption and the means of procuring the plant itself.

For the flagship Toronto outpost of Edition — a new luxury brand lead by Roebuck and Dennis Bennie — local practice StudioAC was tasked with renovating a subway station-adjacent storefront in the city’s Annex neighbourhood into a new template for the company. “We wanted to build spaces that would evoke a feeling of intrigue,” Roebuck says, “and wow using high design to create unrivalled experiences in cannabis.”

To that end, principals Jennifer Kudlats and Andrew Hill leveraged metal grating (seen in a number of the pair’s previous projects including this summer’s installation at Stackt Market as well as their RBC Emerging Designer exhibition at the former Design Exchange) to give the monochromatic interior its industrial edge.

Behind a paired-back facade and elegant screen that shields the airy interior from the street (both an accommodation for Canada’s strict regulations on dispensaries), the gridded material forms a central archipelago of linear displays that run the length of the narrow space. “Rather than the act of designing shelves, displays or sales desks, we wanted to produce a singular design element,” Kudlats explains of the gesture, “a sculpture of sorts that has its own aesthetic quality and massing.” The geometries of the near-white plinths are mirrored in a ceiling feature above, modulating the light from interspersed luminaires. 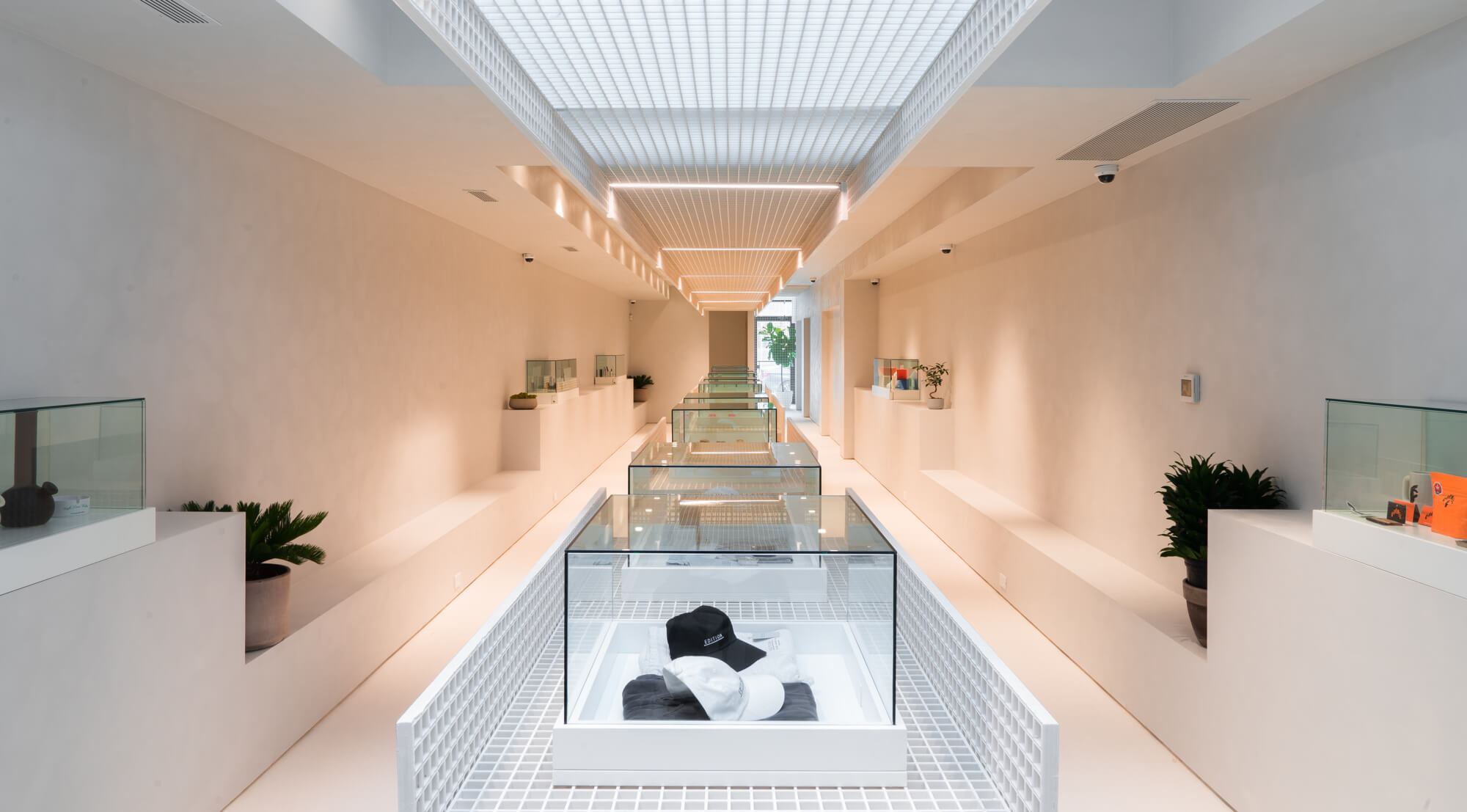 As if emerging from the walls, thin continuous ledges along the perimeter function as additional space for product while corresponding to the designers’ strategy in accommodating existing beams and bulkheads. These rectilinear features are all unified by a singular wall treatment that adds a sense of depth to the rigorously minimal environment. (Near the front of the store, the composition is broken only slightly to create a concealed checkout.)

This ethereal — almost monastic — ambiance is deliberate. For a brand that has tapped the nation’s best producers for a range of vapes, pre-rolls, accessories, clothing and custom edibles, these strategies transform Edition’s wares into glass-encased reliquaries elevated on illuminated altars. Even individual buds are raised to the level of objet d’art when curated on the designer’s custom trays.

Together, it’s a high-design and high-concept — pun intended — experience that not only looks to elevate the typology but the product itself. In other words: all smoke, no mirrors.

Replete with industrial grating and a monastic ambiance, Edition’s new flagship is all smoke and no mirrors.