A Stunning University Campus in Kolding
Henning Larsen Architects of Denmark masterminds a triangular campus building with a spectacular atrium for the University of Southern Denmark. 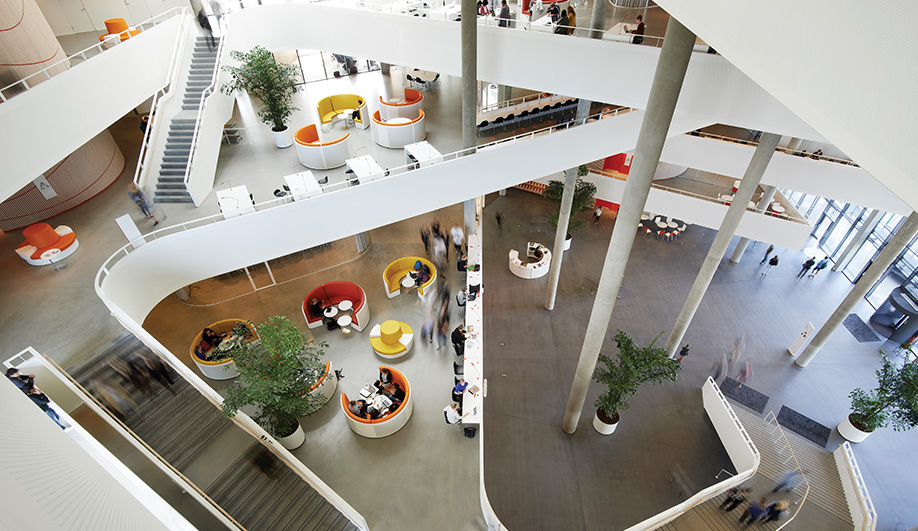 At the triangular campus’s core is a five-storey atrium topped by a skylight. Concrete staircases traverse the space, undergoing a 60‑degree rotation at each level.

Universities have long been built around the idea of the open quadrangle, a geographic and emotional centre of campus where students can gather and exchange ideas. For the University of Southern Denmark, in Kolding, Copenhagen firm Henning Larsen lopped off one side of the quad and embraced the humble triangle. The result is a building animated
by dynamic, angular interior spaces for connection and collaboration. 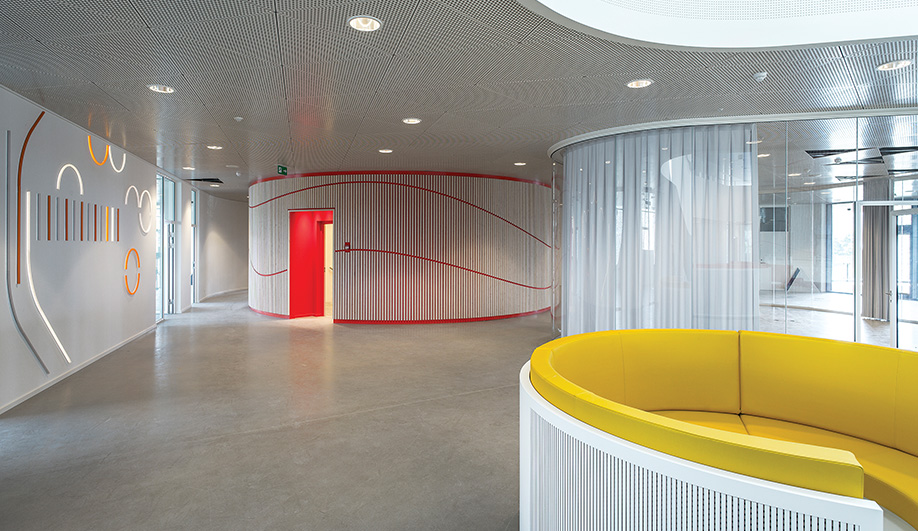 Interior elements are kept to a minimum throughout. On one wall, an abstract installation tells the time, depending on which lights are illuminated.

The university, founded in 1966 and now with campuses in six Danish cities, had previously housed its Kolding program (focused on design, communication, business and entrepreneurship) in a former hospital. “Our old building didn’t give students space to come together between lectures,” says Per Krogh Hansen, campus manager and head of the Department of Design and Communication. “There was no place to make those interdisciplinary links.”

Henning Larsen won the international competition in 2008 to design a campus for 2,000 full-time students and more than 100 staff. The initial idea for the triangle came into play with the building’s footprint. “We took away one side of the square to create some public space in front, and to take advantage of the nearby Kolding River,” says Lise Gandrup Jørgensen. “It turned out that the triangle was a great shape to use for the interior, too.” 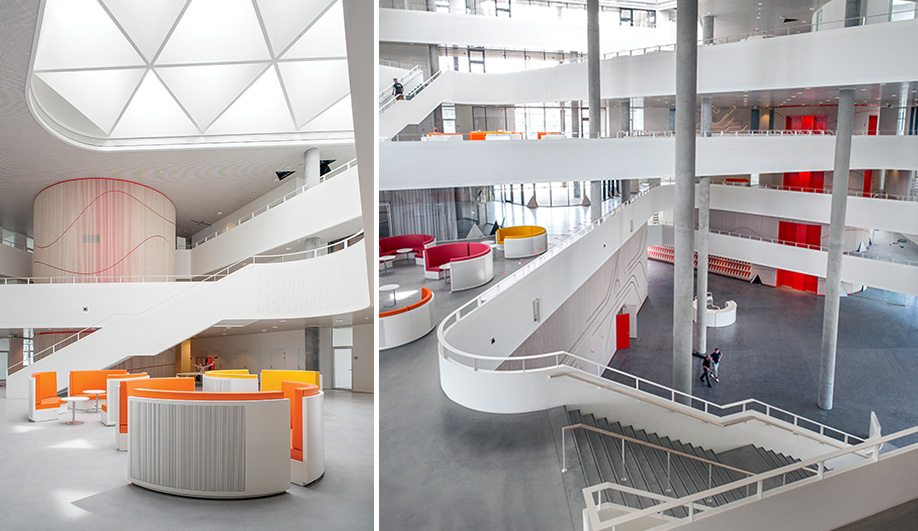 The five-storey atrium, pierced by 20-metre-high concrete columns, restates that motif again and again as it rises from ground level. Staircases snake through successive floors, each built around a central triangular opening and shifting at a 60-degree rotation with each iteration. The eccentric volume means that each floor features balconies with open areas, used as gathering spaces. Capacious study benches along the landings offer views of the atrium’s novel geometries, while custom circular pods by Danish manufacturer Soroe enable students to break into smaller groups. Farther from the atrium, enclosures of full-height glass create quiet study areas that can be made less fishbowl-y by drawing sheer curtains. 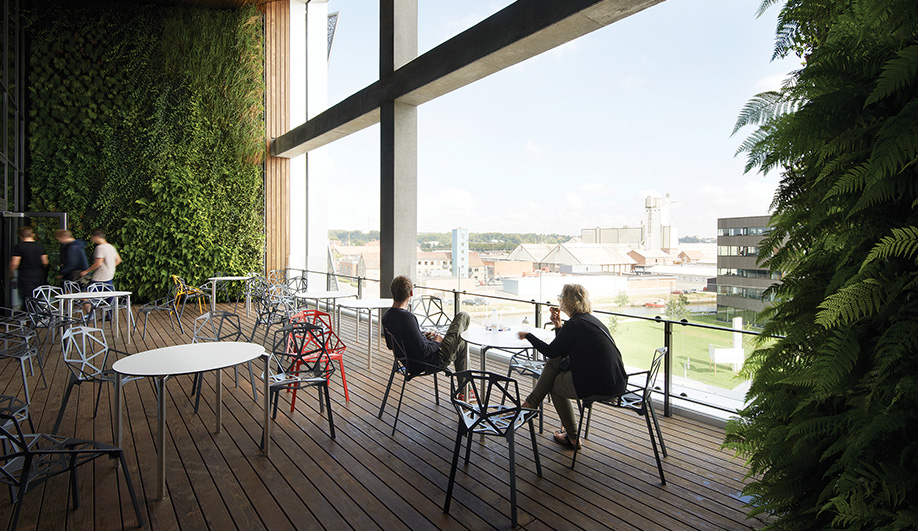 While the atrium is awash in colourful hits, other areas of the campus, including the inset balconies, are clad in wood and living walls. Chairs by Magis.

At the top of each staircase, the architects rounded the corner of the isosceles triangle, encouraging users to continue through the space. “The building embraces you as you move through it,” says Jørgensen. “We used geometry to power this idea of flow.”

With an open core full of hard surfaces, the design required lighting and acoustic solutions. A central skylight brings in sunshine, and a curtain wall is overlaid with a solar shading system of perforated shutters in anodized aluminum. Numbering close to 1,600, with a shape that recalls the narrow point of a sundial arm, the shutters automatically control daylight and temperature levels via sensors. Open-air balconies, cut into the building envelope rather than protruding outward, bring in even more light. These spaces – the largest of which is flanked by two living walls – are clad in southern yellow pine, and they overlook the landscaping by Arkitekt Kristine Jensens. 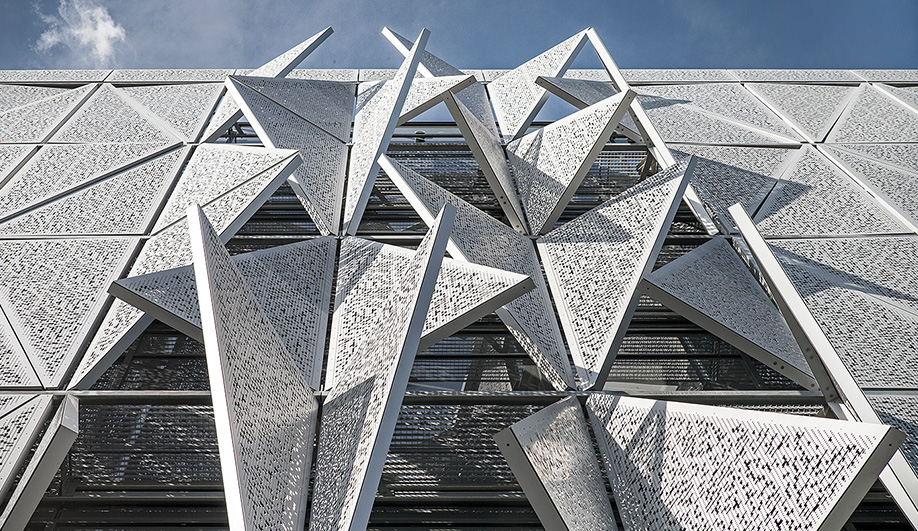 To regulate sound levels, the firm turned to Moelven, a manufacturer of Kerto, which is typically used for beams and joists or concrete formwork. The laminated veneer lumber was cut into triangular panels, perforated, then backed with black felt to dampen overhead sound. Tall strips cut to reveal the grain were also used to clad the exterior of the auditorium, where Kerto fence work is backed by acoustic padding painted red. Thicker cuts – this time with the grain running horizontally – cover the interior, the abundance of textured wood giving the windowless space a cozy Nordic feel. Jørgensen loved the look so much, she had a dining table custom made from Kerto for her own home. 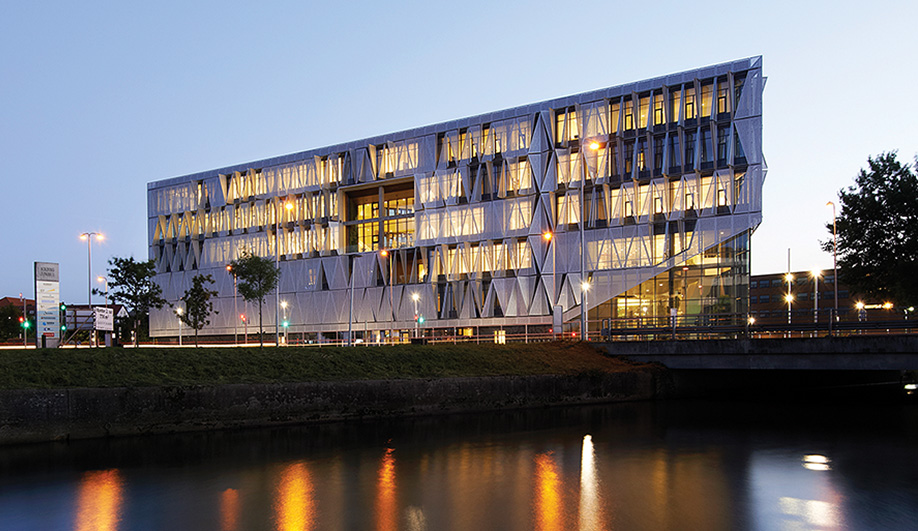 Close to 1,600 perforated aluminum shutters are controlled by sensors, automatically responding to daylight and temperature levels. Their forms echo the building’s three-sided footprint.

All of these smart design choices result in a campus replete with varied and inspiring spaces. As well, the mostly white and grey palette is punched up with snaps of colour, courtesy of Kvadrat Maharam upholstery. There are endless clever geometric details to catch the eye, but there is also a reassuring logic to the space that one suspects grows more comforting the more time one spends there. “I think we’ve designed a very generous building,” says Jørgensen.

To that point, a pair of pieces by Frankfurt artist Tobias Rehberger rewards lingering. By law in Denmark, public buildings must devote one per cent of their budgets to art. Rehberger created a set of curious light installations inside that tell the time based on which lights and how many are illuminated at a time. The different shapes and lengths of lines signal one-minute, 10-minute and one-hour intervals.

He did the same thing outside with a set of some 50 shutters, in green, blue, pink, orange, and yellow, that track the minutes and hours by opening and closing according to their specific colour. These are the sort of puzzle-like artworks that reward repeated viewing. The more time students spend on campus, the better they will understand the code. And that, presumably, is the greater aim of a well-designed university: to draw in students. ­