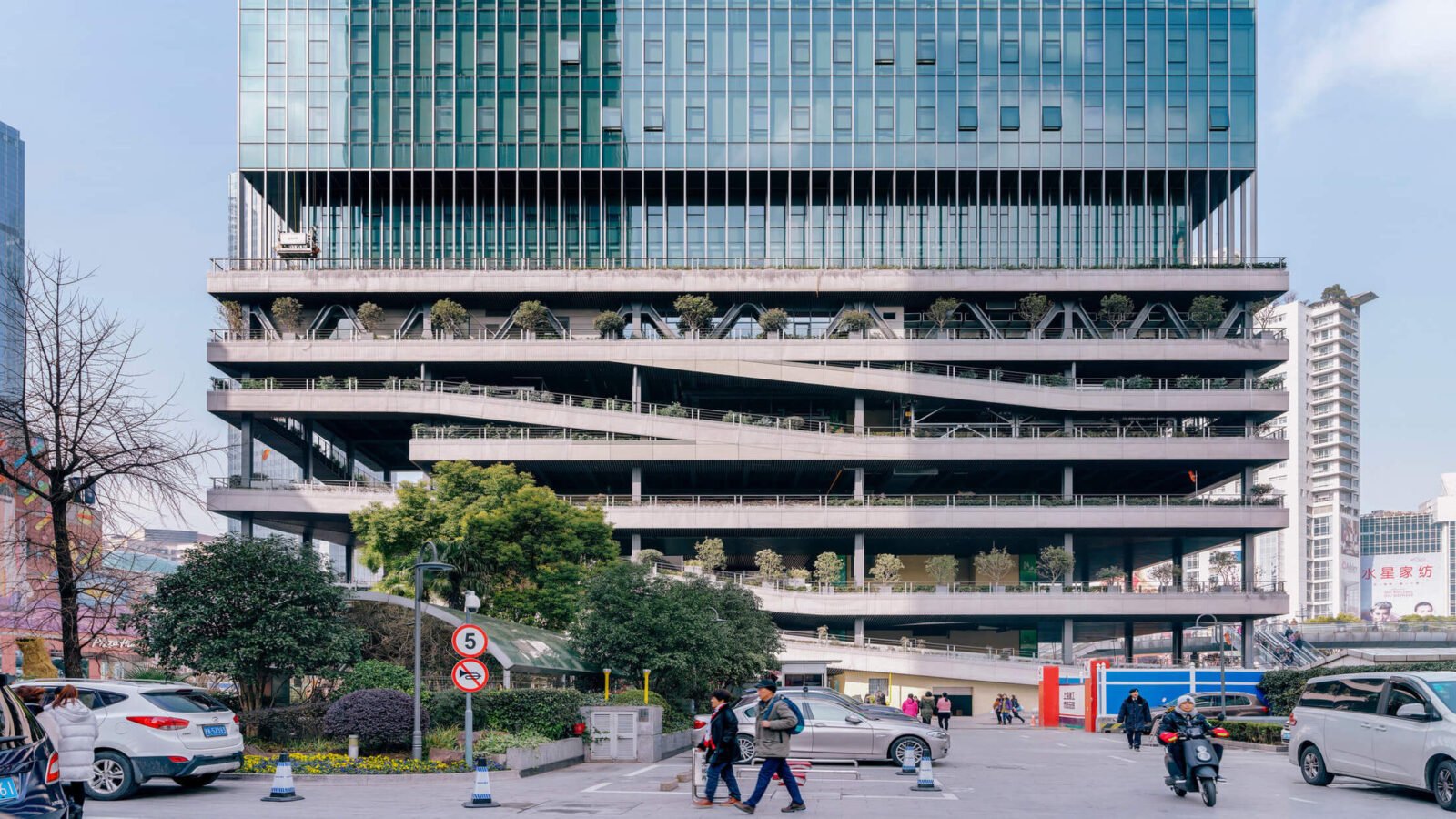 In the bustling Chinese metropolis, Jacques Ferrier and Sensual City Studio’s T20 tower attempts to carve out a pedestrian haven in a car-dominated environment.

Can a parking garage contribute to a vibrant and pedestrian-friendly urban landscape? In Shanghai, the new T20 mixed-use tower by Jacques Ferrier Architecture and Sensual City Studio tackles the question with uncommon zeal, framing a four-level car park in a ribbon of greenery and public space.

On one of the city’s busiest intersections, the office complex introduces a cascade of green-scaped walkways below a modern tower. At street level, the office building’s massing is cantilevered over its slender concrete core – which houses the parking levels – to foster a more breathable and open space. (Two underground stories for retail also provide connections to nearby buildings, integrating the complex into its surroundings). T20’s ring of sloping, verdant walkways beckons visitors to climb the tower, and take in the panorama of the city. It’s a troubling vista.

As one ascends the path, the urban landscape unfolds in a tangle of towers and construction cranes, linked by veins of wide roads and elevated walkways. T20’s immediate surroundings reflect the same reality: an environment dominated by cars. In front of the building, a 10-lane boulevard is topped by a welcome new pedestrian bridge, which was completed as part of the project. Below, the volume of vehicles and the width of the roadway combine to create a street-level environment that’s difficult to navigate on foot, necessitating the growing network of elevated pathways that stretches out across the city.

For all its paeans to public life and the pedestrian experience, T20 yields to an urban context that marginalizes people in favour of cars. While the clever addition of a street-level plaza creates vital open space, the lack of light and program makes the place little more than an interstitial concrete alcove. Instead, people are drawn into more animated environments beneath and above the street. But to what end? 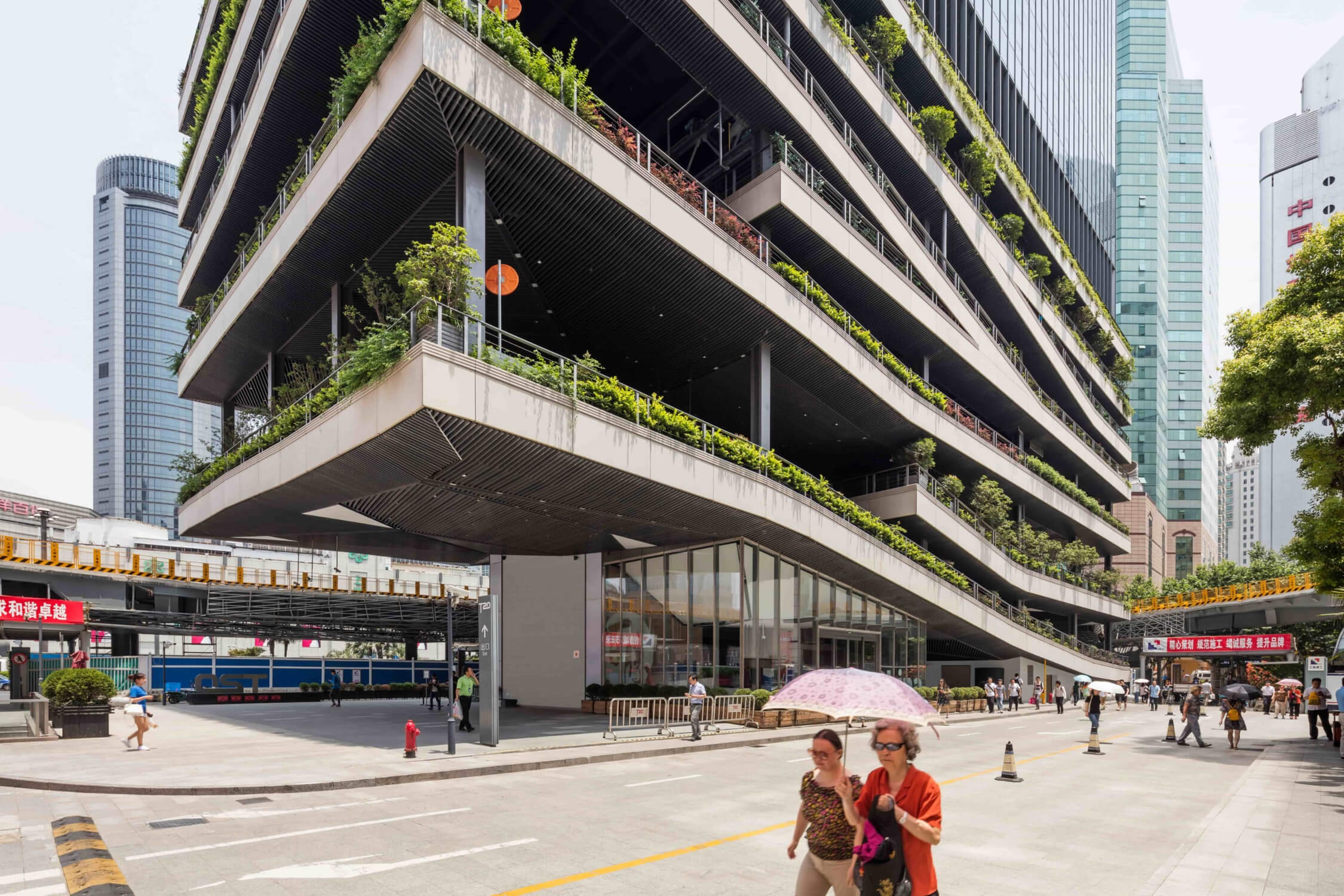 Framing the parking levels, the showpiece ring of walkways is a concrete maze with a perimeter of greenery. Beyond the views, there’s not enough reason to venture up. It’s a vacant landscape, lacking substantial greenery, seating and quality of space. The pedestrian bridge opens a more vital, utilitarian link to its surroundings – but it too exists in a disembodied state, floating above the street and offering members of the public nothing to do but walk to the other side.

Aesthetically, the project nonetheless presents an elegant solution to an urban dilemma. Compared to its older counterparts – examples of office towers above parking garages abound in most large American cities – T20 reads as more humane. But the fundamental problems remain. Enabling vacant street-level environments and car-dominated streets, similar buildings contributed to the degradation of America’s urban fabric throughout the late 20th century (and beyond). In China, T20’s earnest, pedestrian-oriented design elements valiantly distinguish it from its antecedents, but they do not resolve the fundamental harms of building for the automobile.

T20 attempts to correct a problem, yet it also perpetuates it. Pedestrian bridges and vertical gardens are well-intentioned gestures, but why are they needed in the first place? Because there are so many cars. And T20’s parking only encourages more, all while detaching the office tower from the city below.

The designers aren’t wholly to blame. With T20, Jacques Ferrier and Sensual City Studio have offered a thoughtful solution to a difficult urban context, even if deeper problems persist. It’s hardly up to one project to reverse the tide, but on the urban scale returning streets to pedestrians is vastly preferable – economically, environmentally and culturally – to the mitigatory, apologetic urbanism seen here. In the 21st century, we have to do better.

In the bustling Chinese metropolis, Jacques Ferrier and Sensual City Studio’s T20 tower attempts to carve out a pedestrian haven in a car-dominated environment.