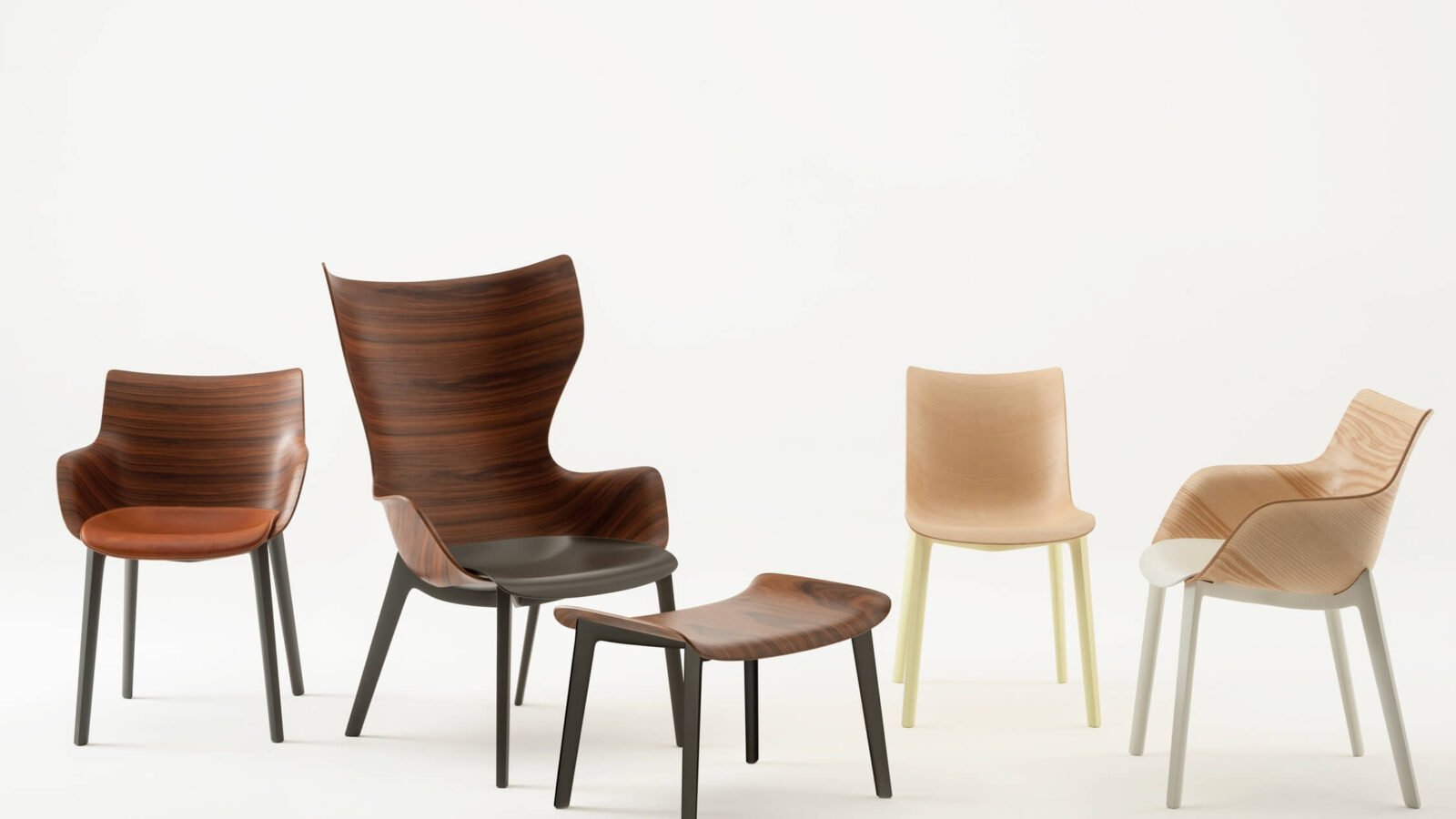 The 10 Chairs We Loved This Decade

From hemp, wood and carbon fibre designs to contemporary incarnations of classic typologies, these are the 10 chairs that captured our attention.

There’s just something about a well-designed chair. Beyond the fun of creating a product that everyone needs and uses, designers often see chairs as an opportunity to test the limits of materials, production technologies and familiar aesthetics, creating instant icons along the way. Looking back on a decade of design, these are the 10 chairs we feel will stand the test of time and be embraced for years to come.

1
Spun by Thomas Heatherwick for Magis, 2010

Since its debut at the Milan furniture fair in 2010, London designer Thomas Heatherwick’s Spun Seat for Italian manufacturer Magis has, in the iconic words of Dead or Alive, kept users spinning “’right round, baby, right ’round.” While Heatherwick is known for such extravagant architectural works as the Vessel in New York and the Bund Finance Centre in Shanghai, his rotation-moulded polypropylene throne is a decidedly more minimal (and smaller-scaled) approach to one of the fundamental challenges of design: gravity. It’s a playful balancing act akin to a spinning top, forcing its users to constantly find equilibrium while making a 360-degree turn. If sitting down here doesn’t bring a smile to your face, nothing will.

While it only became legal to farm hemp in the U.S. last year, German designer Werner Aisslinger was exploring the design potential of the material as early as 2011, when he presented his Hemp Chair (in collaboration with BASF) during Salone del Mobile in Milan. With a shape reminiscent of Verner Panton’s iconic plastic stacking chair, Hemp took the typology in a new sustainable direction: Aisslinger utilized compression moulding technology typical in the automotive industry to combine hemp and kenaf fibres with a toxin-free, water-based resin to create a composite alternative. At the time, he described the first non-plastic monobloc chair’s development as a reaction to the desire of many consumers for a “well-balanced and healthy lifestyle that is in harmony with the environment” – a sentiment that’s even more relevant today as demands for plastic alternatives grow louder across all industries.

Though the rocking chair has been around since the early 18th century, in 2011, Edward Barber and Jay Osgerby of Barber & Osgerby transformed this distinctly American typology into something else entirely for Swiss manufacturer Vitra. Building on a study the year prior that discovered the positive effects of sitting forward (namely improved back and abdominal muscle activity that increases oxygen supply), the pair devised a recycled polypropylene seat with a slightly inclined bottom rail that allows users to both sit upright as well as lean in. “It was obvious that this chair must live as comfortably in a kitchen at home, as in a classroom or at a desk,” they say of the final product, which provides all the functionality of an ergonomic task chair without the endless components and moving parts. It’s simple, refined and even stackable – a modern classic.

Born and bred in Denmark, Niels Bendtsen is a Canadian treasure who has long been recognized on the global stage. At the same time as collaborating with top international brands like Linteloo, Very Wood, Montis and Moroso, he oversees the high-quality output of Bensen – his Vancouver furniture brand – for which he created U Turn. The vibrant tub chair won the 2014 AZ Awards Winner for Best Furniture Design. At the time, we marvelled, “Mechanically, U Turn borrows from the auto industry for its smooth 360‑degree rotation; the steel frame and elastic suspension are held within a custom mould injected with liquid foam to create a supportive yet flexible seat. As with all Bensen products, attention to detail is no small matter, and precision tailoring can be seen in the flat-fell seams of the slipcovers, which come in a range of hues and fabrics, including leather and wool.” The design is destined to remain relevant for both home and contract spaces for years to come.

Weighing in at a mere three kilograms, Membrane’s pleasingly bulbous form was the result of research into high-performance athletic gear and tent construction. Known for material-driven exploration and process-led designs, Benjamin Hubert and his London-based multidisciplinary studio Layer devised the lounge chair for ClassiCon to be less bulky and cumbersome and to leave a more diminished carbon footprint than its conventional counterparts. Lightweight but supportive, the CNC-shaped stainless steel and aluminum skeleton is wrapped in a 3D-woven skin of stretchy textile (held in place via zippers and fasteners) with integrated seat pads; this material and technical combination required only a small amount of polyurethane foam padding, which reduced the environmental impact without sacrificing comfort.

Sometimes, what you don’t see is as important as what you do see. That was the principle behind Jasper Morrison’s mid-decade Alfi collection for Emeco, the American brand long known for its commitment to sustainability and handcraftsmanship. In the case of the Alfi line – a highlight of which is the elegant round-back chair that serves as the foundation for the rest of the collection’s stools and benches – seats are made of reclaimed post-industrial waste (92.5 per cent polypropylene combined with 7.5 per cent wood fibre), while the responsibly harvested, locally sourced ash bases are fashioned by Amish craftsmen. The seats also come in a palette of handsome earth tones, including brown, green, sand, red and dark grey. Overall, Alfi reflects Emeco and Morrison’s “common appreciation for the invisible qualities behind simplicity.” But what is visible is also pretty impressive, making the still-urgent point that beauty and sustainability aren’t mutually exclusive.

This is an unmistakable design. Sinous and playful, Patricia Urquiola’s bold 570 Gender by Cassina reveals itself is an encounter of two halves, which are expressed as mirrored opposites. Both seat and backrest – which can recline by about 12 degrees – are defined by a contrast of material and colour, with a soft, padded interior complemented by a pair of luxuriously rigid and slightly dramatic saddle leather wings. On the base, however, the seat stretches across the sides to the floor, with the leather finish discretely placed on the underside. What’s interior below becomes exterior above, and vice versa. (A pouf of the same material interplay is also available). As a design concept that gently hints at the fluid and fraught social construction of what’s masculine and feminine, it’s very much a product of the 2010s. As a piece of furniture, it’s timeless.

8
LessThanFive by Michael Young for Coalesse, 2016

Light. Strong. Sleek. Living up to its promise, this stackable chair weighs “less than five” pounds. It’s an impressive technical feat made possible by its innovative carbon-fibre unibody construction: the chairs are moulded in woven layers of carbon fibre sheets which are then heated into a unified single piece. Designed by Michael Young in collaboration with the Coalesse Design Group, LessThanFive launched commercially two years after the 2014 Salone Del Mobile debut of its prototype. No surprise, considering the novel engineering and assembly – inspired by high-end bicycles – required to make the chair a reality. Free of joints and fixings, LessThanFive is also surprisingly comfortable and ergonomic. Over three years after its launch, it still feels ahead of its time, with an updated collection of matte finishes released in late 2019.

More than a decade in the making, Cosm was well worth the wait, setting a new standard for what a task chair could and should be. Intuitive, responsive and supremely supportive, the design is a powerhouse of precision detailing all wrapped up in a sleek, good-looking frame. When conceiving Cosm for Herman Miller, Studio 7.5 developed an “auto-harmonic tilt” mechanism that instantly responds to the sitter’s unique body and posture to provide a personalized and balanced seat. What’s more, its sculptural form – comprised of metals, plastic and elastomeric suspension netting – is dipped fully in colour for a completely monotone look. Boasting both aesthetics and ergonomics, Cosm is leaps and bounds above others of its kind.

It was a big deal in 2018 when Kartell, famous for its groundbreaking plastic furnishings, began championing an alternate material: wood. At that year’s Milan Furniture Fair, the brand unveiled its unambiguously titled Woody collection of seating designed by Philippe Starck, who took advantage of a patented moulding process to fashion uncommonly curvy chair backs, from low to wingback-style high. For Kartell, Woody represented a chance to trumpet the “continuous technological research” that went into perfecting a system that extends the curvature of wooden furniture panels. Starck, though, had a more poetic view. “Woody,” he said, “answers a desire and also a need for wood,” its lines and textures satisfying “the basic human need to be surrounded with signs [of] nature.”

From hemp, wood and carbon fibre designs to contemporary incarnations of classic typologies, these are the 10 chairs that captured our attention.