The Box Office
For a small creative agency, H2O Architectes makes the most of cubbyholes and storage space. 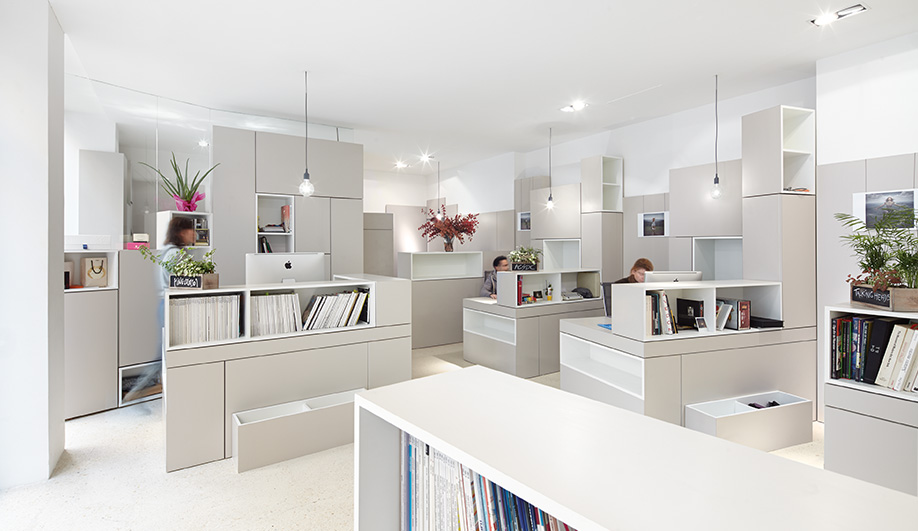 H2O fabricated boxes in 13 varying dimensions, to create a versatile inter­ior for the multimedia creative agency Hyper­nuit. While five work­stations are fixed into place, peripheral containers can be moved around as needed. 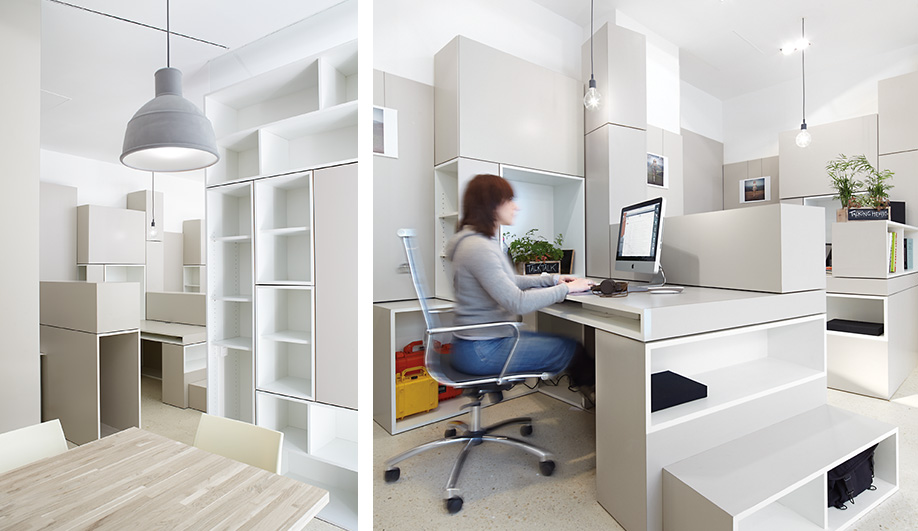 “It was a ballet of boxes,” quipped Antoine Santiard, one of three architects who worked on the Hypernuit project, in which a 62-square-metre office space in Paris was assembled almost entirely from custom-made containers. It was the type of original solution that could only come from an unconventional brief: how to design a layout for a collective of creative types who wanted to feel together but keep their autonomous identities. And, who also needed a multifunctional space that could simultaneously store and show off the photography that united them together.

Naturally, the budget for the start-up agency was tight. But at least the space was raw, oriented lengthwise and facing out to the street. So for H2O Architectes, installing full-length windows was an easy first step. Santiard and his colleagues Charlotte Hubert and Jean-Jacques Hubert initially proposed three “scenarios” before settling on the modular arrangement. It consists consisting of five workstations configured with a surfeit of boxes to accommodate computer servers, portfolios, books and other office needs.

While the workstations are fixed, all the peripheral boxes can be easily moved and restacked for gatherings. The walls have been lined with panels that maintain a consistent line within the stations while allowing artwork to be mounted and removed without damage. Meanwhile, the back corner of the space has been allocated to a meeting room separated by a glass wall and sliding screen. There is also a well-concealed kitchenette.

Everything exists in a neutral palette of white and grey laminate with a matching polished concrete floor. Santiard explains that the white interior boxes enhance the lightness of the space and encourage personalization from staffers. While the office was completed in three months, at a cost of just $85,000, it mostly came together in the final four days when all 81 boxes arrived from the millworking shop.

The project represents a “mise-en-interieur” where, as Santiard notes, an endless variety of assemblages allows for a versatile, layered space. Already, he has returned to host exhibitions only to find the cubbies filled with books and art lining the walls. And he seems pleased: “You can already see how they have appropriated the space; each has made it their own.”