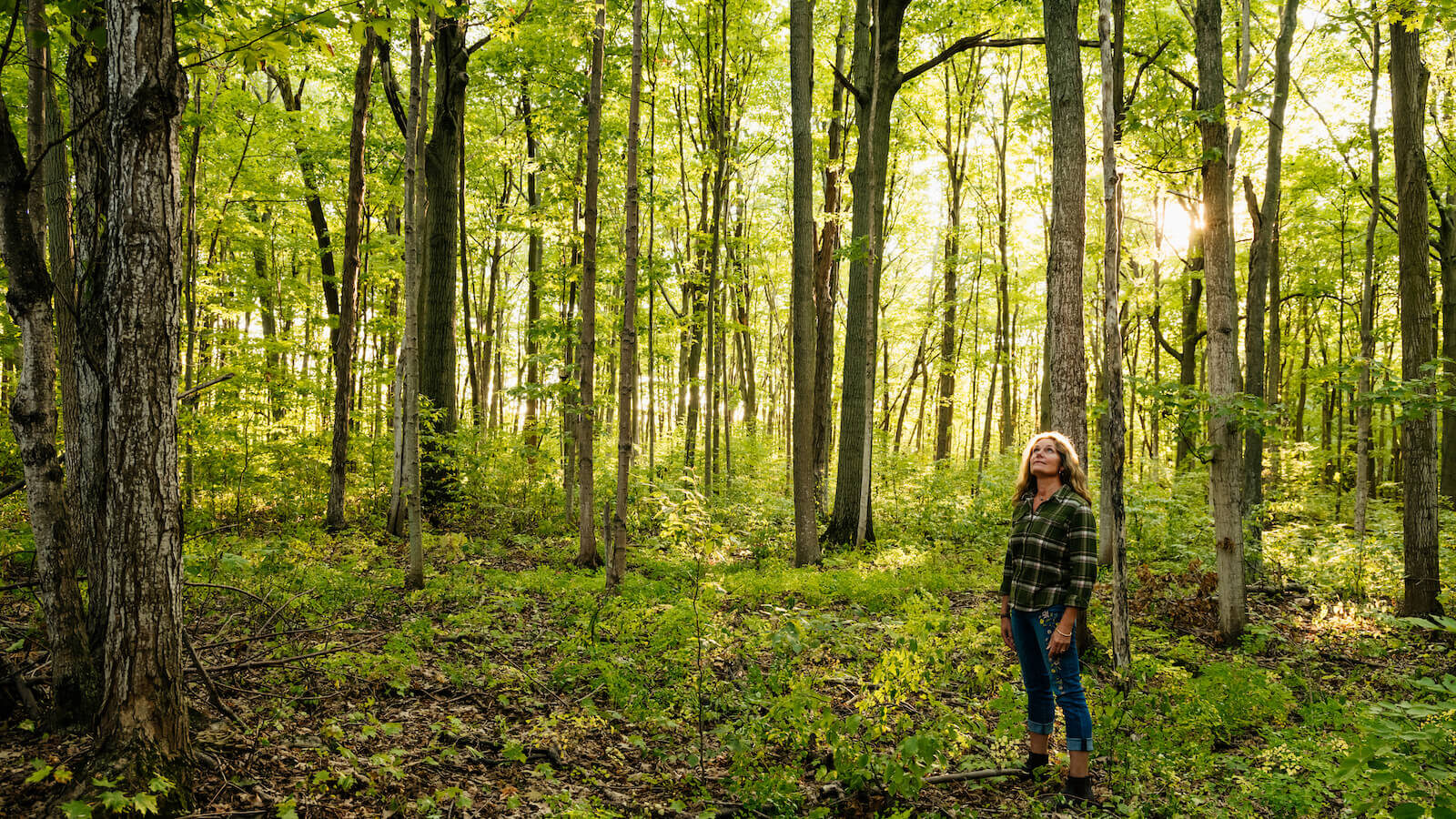 The Connected Landscapes of Nina-Marie Lister

For decades, the Toronto ecological designer, and recent awardee of the prestigious Margolese Prize, has been bringing together various disciplines to create thriving landscapes for all living things.

At the end of 2021, the largest wildlife passage in the world will break ground in California, bridging 10 formidable lanes of traffic on US-101. To understand why the state needs a US$87-million land crossing, it’s important to meet P-22, who’s been known to roam the Hollywood Hills at night.

“He’s a young male cougar, maybe about 10 years old. And he’s been isolated on one side of the highway for a number of years,” Nina-Marie Lister, the Toronto ecological designer, explains. “He’s in his prime breeding years and he can’t find a mate. Well, why can’t he find a mate? Because he has to cross two major highways. It’s insane that he’s still alive.” Snapshots of P-22 against the Hollywood sign and in Griffith Park, shared on social media by those who’ve encountered him on his prowls, have captured hearts and minds.

The team behind the Liberty Canyon Wildlife Crossing has leveraged this groundswell of goodwill to gather support across various groups of stakeholders. The bridge and underpass will allow for the safe migration of endangered animals, like bobcats, grey foxes, coyotes, mule deer and mountain lions, including P-22. In effect, it remedies a massive oversight in road infrastructure, one replicated in regions around the world, that ignores how major arteries sever and isolate increasingly fragile biodiversity into disparate territories. Lister describes people and wildlife as the two clients of this kind of landscape project. “We’ve found that in all of our research, when you present this as a problem that has one solution for two different groups – one that can speak, one that can’t – it’s considered a win-win.” 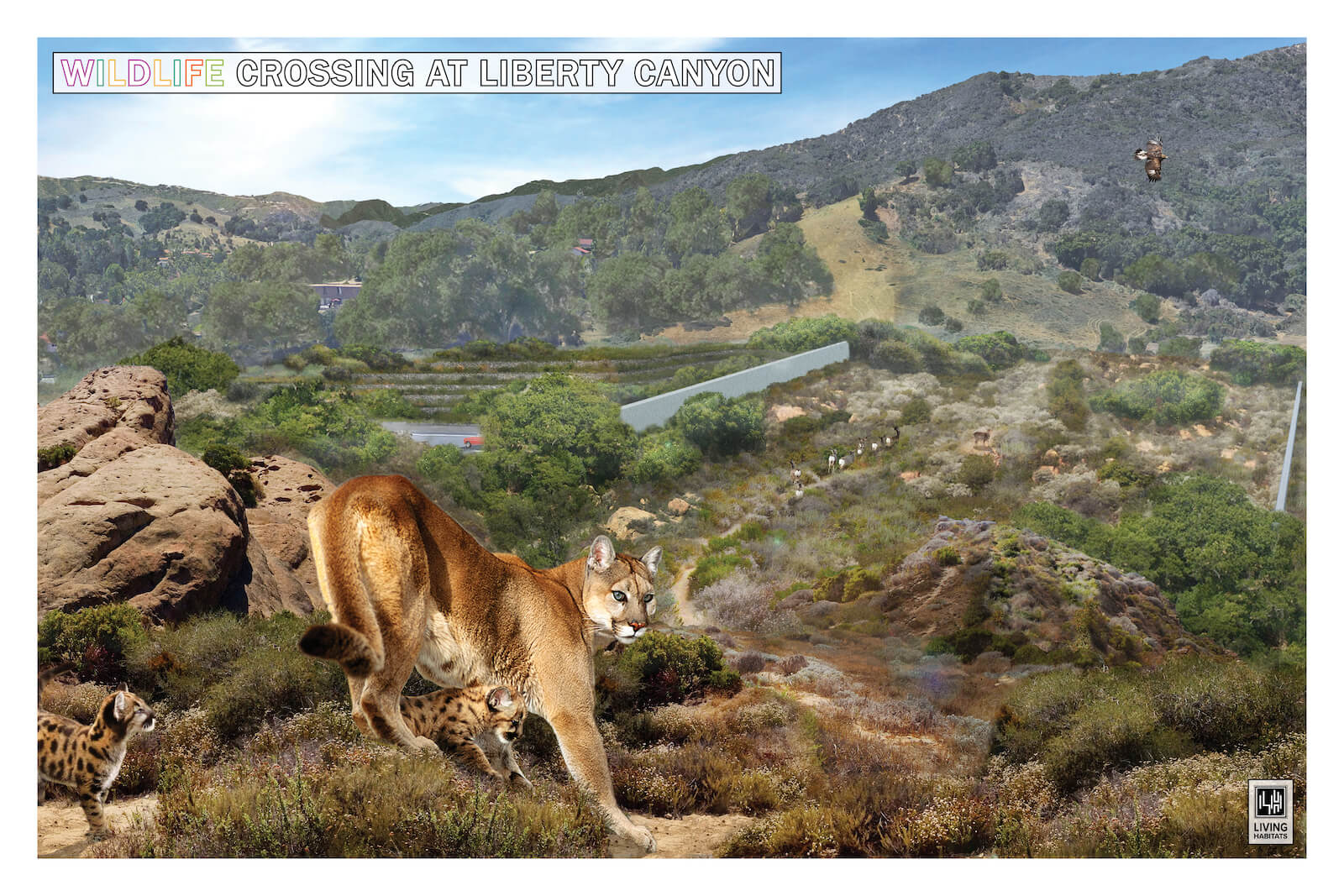 A visualization of the Liberty Canyon Mountain Lion Crossing by Living Habitats, 2020

The public-private partnership is spearheaded by Beth Pratt, the National Wildlife Federation’s regional executive director for California. But its beginnings were influenced by the work of Lister, who was recently awarded the $50,000 Margolese Prize for her interdisciplinary approach to landscape-driven urban design. Lister has developed a new type of practice by linking together the various streams vital to creating connected landscapes, from her research and teaching to her practice: She operates her own studio, Plandform, teaches at Harvard – in 2022 she will helm a graduate research course on (re)wilding landscapes – and is the founder of the Ecological Design Lab (EDL) at Ryerson University’s School of Urban and Regional Planning, where she is a professor and the graduate director. “My projects are definitively not about bricks and mortar; they’re actually about process and flow and energy – and the creation of something new when you work in the interstitial spaces between disciplines,” she tells me. 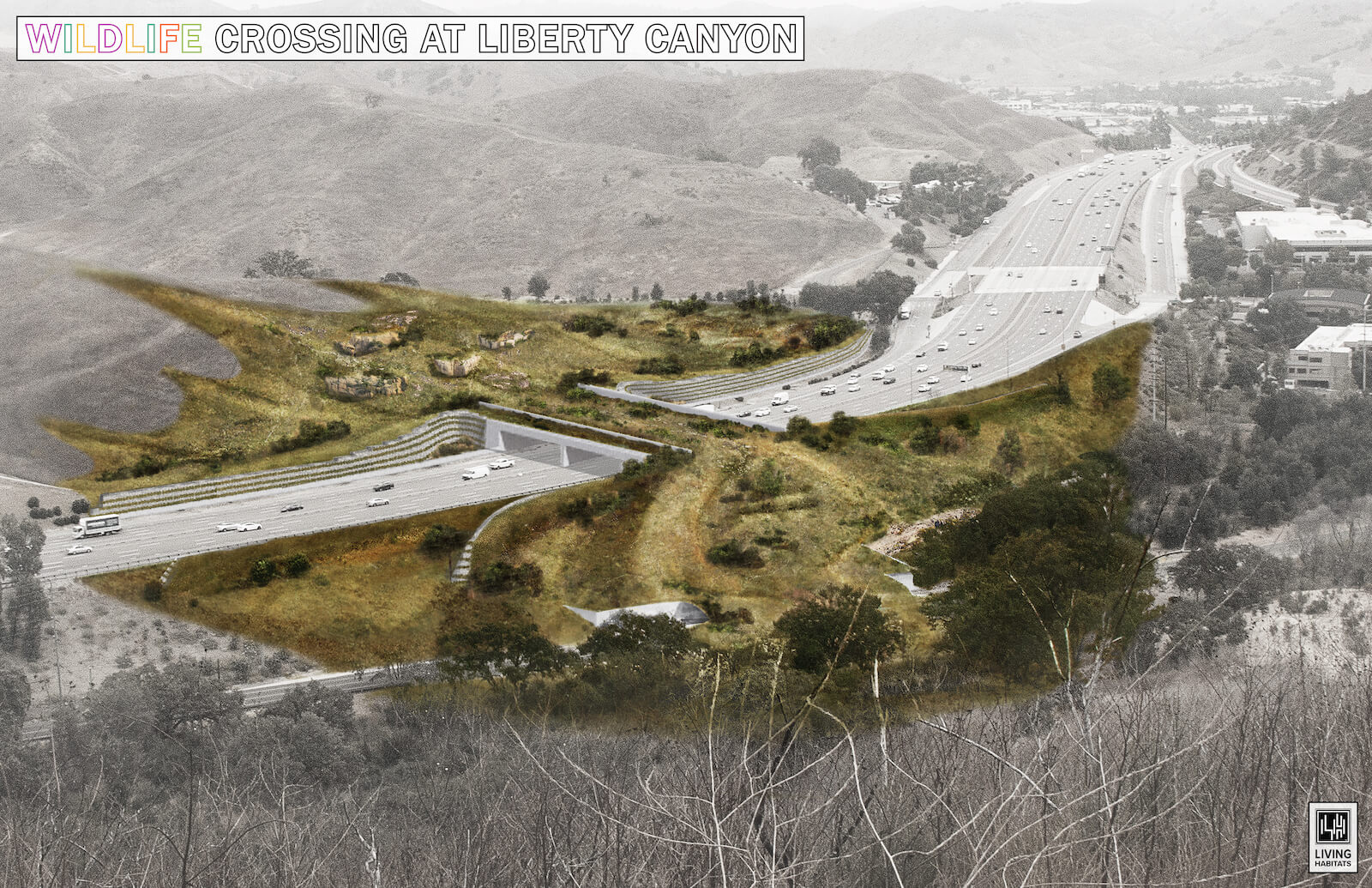 The crossing would create a passage for wildlife across 10 lanes of traffic on US-101 in California. Credit: Living Habitats, 2020

In this way, she has been a catalyst for multitudes of projects across multiple scales – from the local to the global – aimed at championing biodiversity and fighting climate change. The Liberty Canyon Wildlife Crossing was inspired by the CAD$25-million Trans-Canada highway crossing now in development in Canmore, Alberta, where an annual average of 50 collisions involving large wildlife, like elk, cause injury and death to both humans and animals. And the impetus for both mega-infrastructures and others like them was an international competition Lister and a team launched in 2010 that also helped to establish the non-profit organization Animal Road Crossing (known simply as ARC) as well as Safe Passages, a research project led by Lister, funded by the federal government though SSHRC and run through her lab at Ryerson. 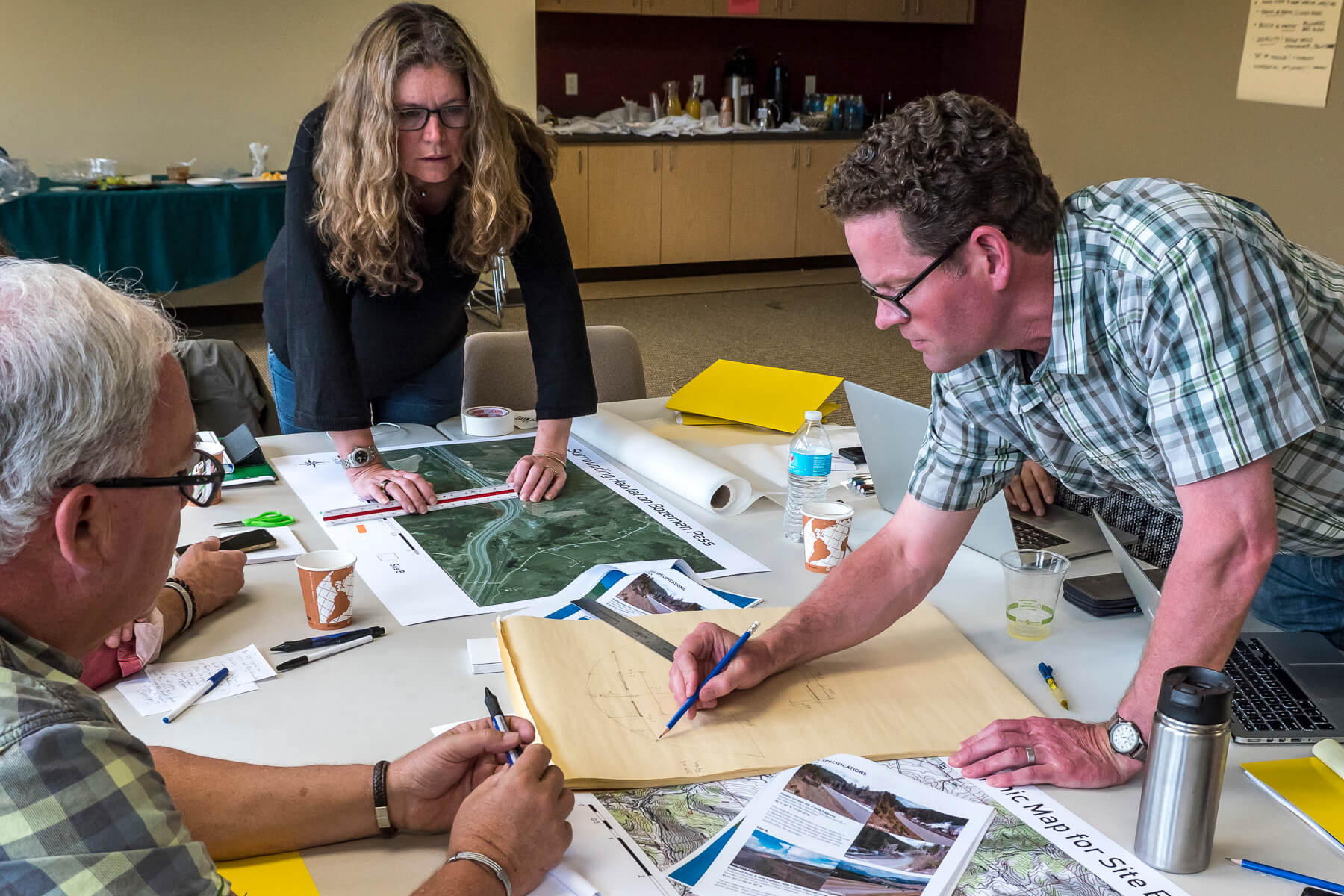 A moment in the CoLab dedicated to ReConnecting Landscapes Green Infrastructure for People and Wildlife, 2018.

A major through line in her work are her Collaboratories, or CoLabs: “CoLabs are a design-based research method — a tool, you could say — to advance integrated planning and design outcomes,” she says. “We use them to study and engage with specific planning and design practices and allied professionals, to deliver complex projects that cut across several professional disciplines (engineering, ecology, landscape architecture, etc).” In essence, they are design charettes – but with a much broader mandate that encompasses working with scientific data, engineering and planning policies as well as physical design. A few years ago, Beth Pratt attended a CoLab dedicated to the Canmore wildlife crossing, then invited ARC Solutions (including the EDL and Lister) to act as technical advisors to Liberty Canyon.

The demystification of the often-invisible choreography of species that thrive on, hunt and breed in our urban systems is the singular outcome of Lister’s combined efforts. “My background is systems ecology, which is a way of looking at the world that understands that living systems are inherently unpredictable. The systems of control that cities have developed, such as mechanical engineering, don’t apply to living systems: You can’t simply ram a living system through that operating principle – it doesn’t work.”

The City of Toronto’s approach to her own family garden is an example of trying to force an accepted, if spurious, wisdom onto a wild patch of life. Thriving with about one hundred varieties of tall grasses, weeds and shrubs, her yard became a battleground over what should and should not “grow” in Toronto when a neighbour complained about it, and the municipality asked her to mow it down. 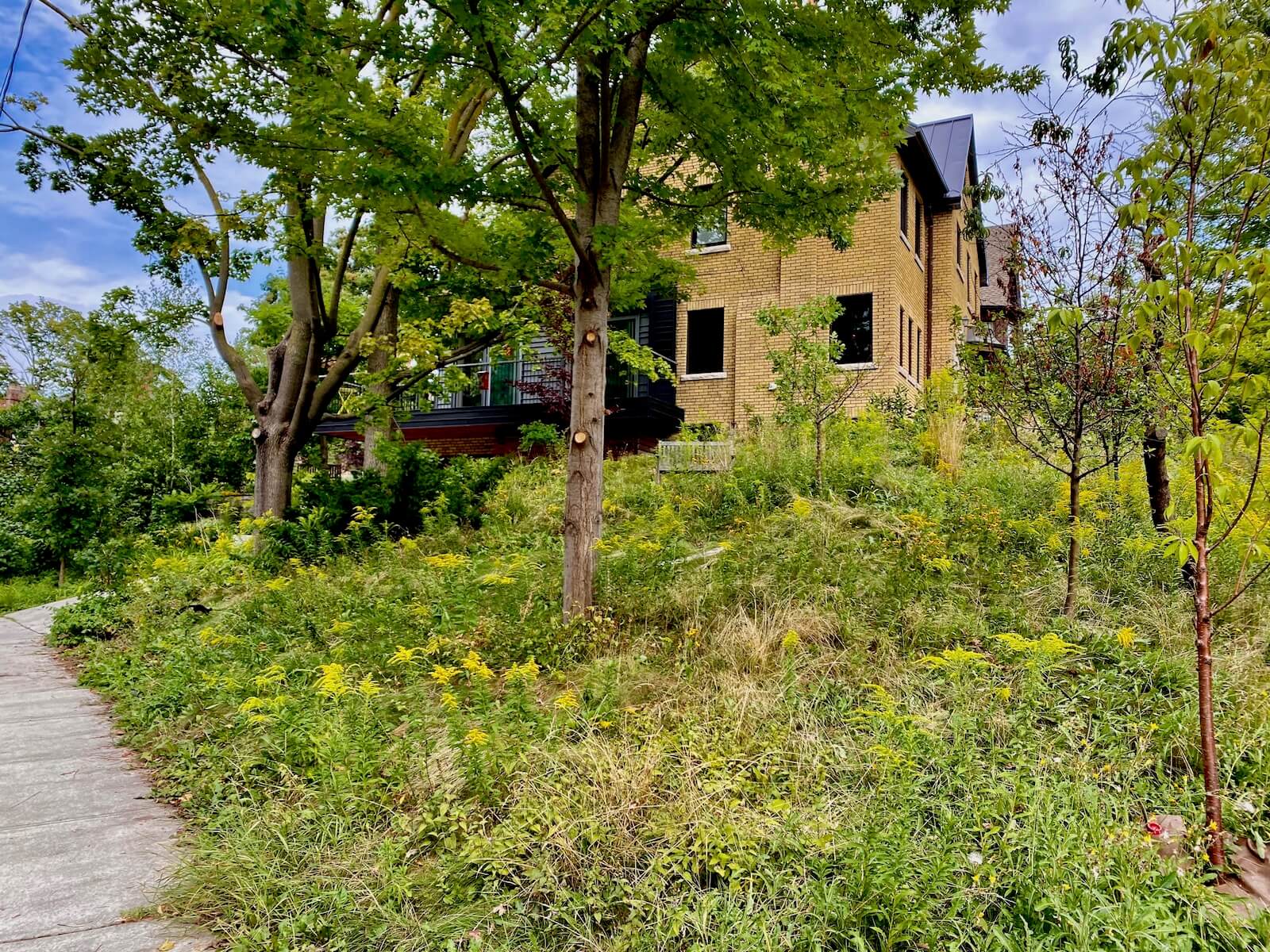 The garden at Lister’s Toronto home.

Lister challenged the bylaw she was supposedly infringing as outdated and in contradiction to the city’s own recently adopted pollinator protection strategy, which encourages individuals and stewards of public spaces to actively create enticing habitats for bees and butterflies. When the city gave her a pass as an exception to the bylaw, she challenged that as well, turning her experience into a design project and working with her lawyer to rewrite the rules for everyone. She succeeded. 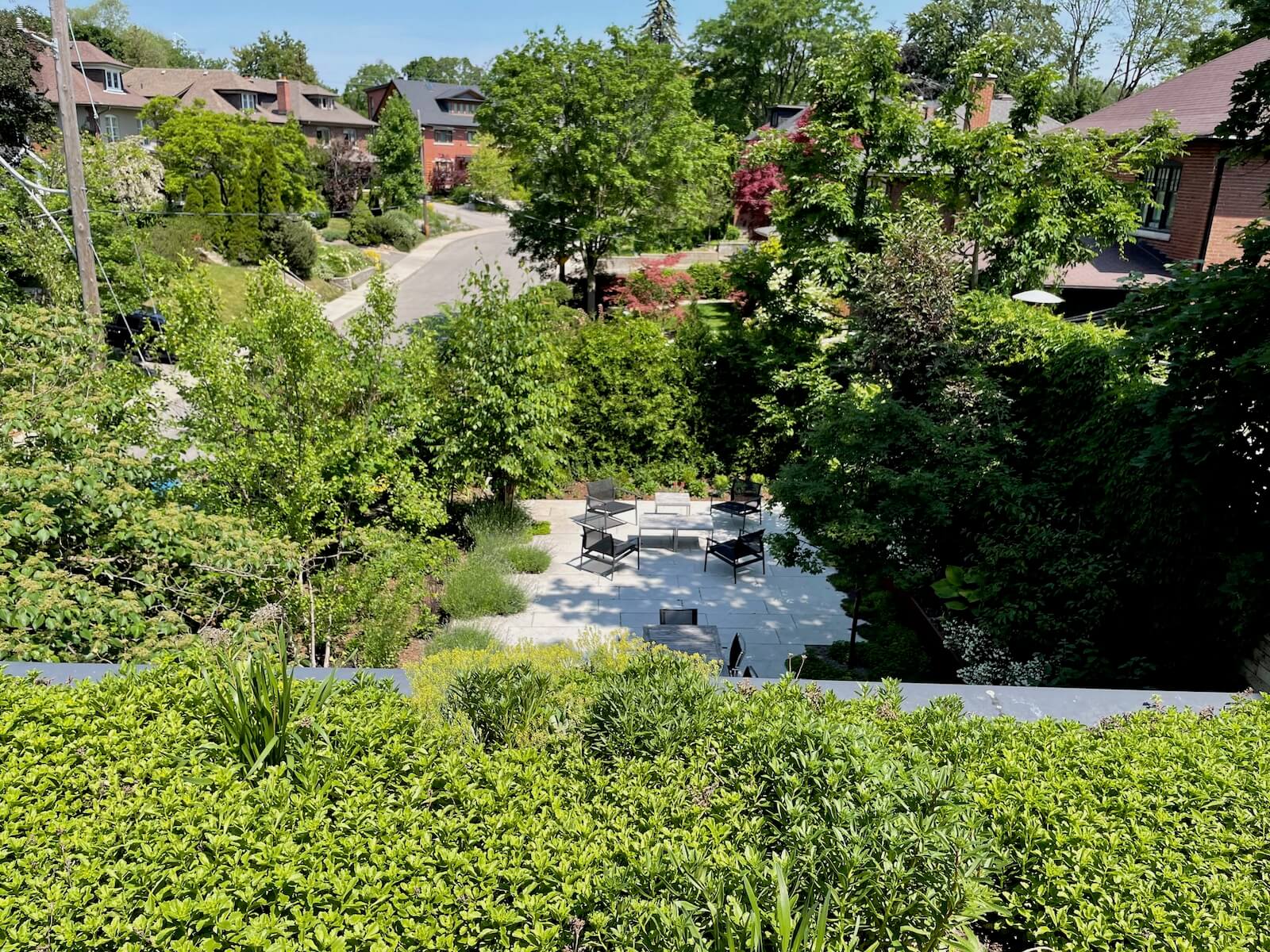 Lister turned her personal experience battling the city into an opportunity to rewrite a bylaw prohibiting tall grasses and weeds.

And in doing so, she demonstrated the potential for major progress to emerge from the hyperlocal. There is a similar dynamic at play in the Meadoway, also in Toronto, which is not so much a new park system as it is the rebranding and bolstering of an existing, if under-appreciated, one: a 16-kilometre hydro corridor that cuts through over a dozen neighbourhoods and traverses many ravines.

Financially supported by the Weston Foundation, the Toronto and Region Conservation is transforming these spaces, which also host community and vegetable gardens, into a more fully connected urban network with a multi-use nature trail that will link downtown Toronto to Rouge National Urban Park. Lister’s design lab helped the team to think through their approach for supporting a place that could became a point of pride for the people who live there, whose homes back onto a once-maligned public utility landscape.

“This project recasts what we mean by land value,” she explains. “And it’s a good example of an approach that was integrated: thinking through the ecology of a meadow way, the social economics of these neighbourhoods that needed access to healthy green space, and frankly, too, to issues of environmental justice.”

Environmental justice is deeply tied to the idea of decolonizing landscapes, a thread that connects her own garden project to collaborations that include Indigenous coalitions from the outset, such as a wildlife crossing in Montana where the local tribal council was integral. Among the tenets of decolonization is embracing Indigenous way of seeing other species as all our relations – including the lone cougar trapped on one side of the highway.

“To visualize a decolonized landscape is to visualize a new relationship to land. Land isn’t just the best and highest economic value we put on it. It’s the sustaining force of life, especially in a time of tremendous urgency around climate change and biodiversity loss,” Lister says. “If we could make visible and legible how land sustains us, both in physical and mental health, and in relationship to other species, and do that together with Indigenous partners, we have the opportunity to create a new common language, a shared understanding.”

The work of landscape architecture and urban design takes a long time. And in a warming planet, that can be frustrating. But Lister believes that designers need to make hope. “We can make change in ways that are forceful and elegant and beautiful. And our designs can’t be driven by vanity – we have to start leading with intention,” she says. “It’s got to be about restoring the land under our feet in ways that are good for all our relations and good for future generations. Our land is all we’ve got.”

For decades, the Toronto ecological designer, and recent awardee of the prestigious Margolese Prize, has been bringing together various disciplines to create thriving landscapes for all living things.