How a Toronto Architect Crafted a Forever House
For an empty-nester couple, Luc Bouliane finds simple but effective ways to integrate features for aging in place without compromising on beauty. 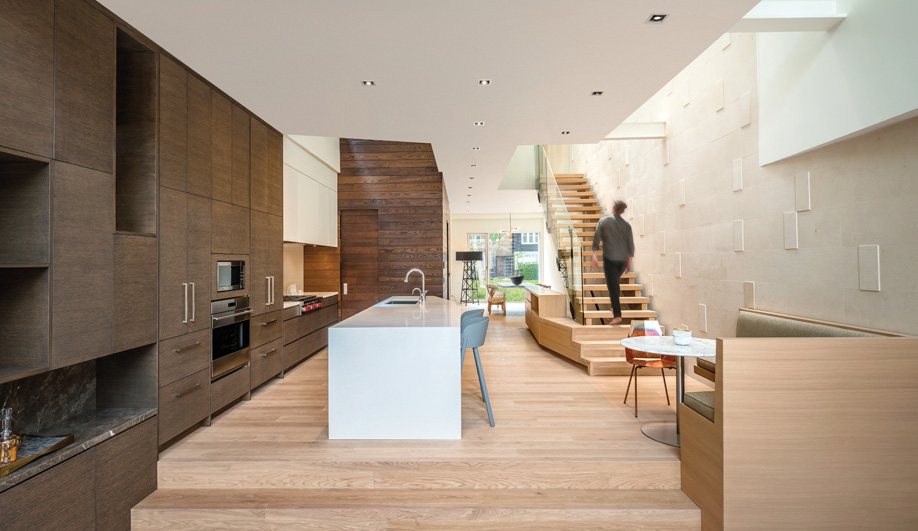 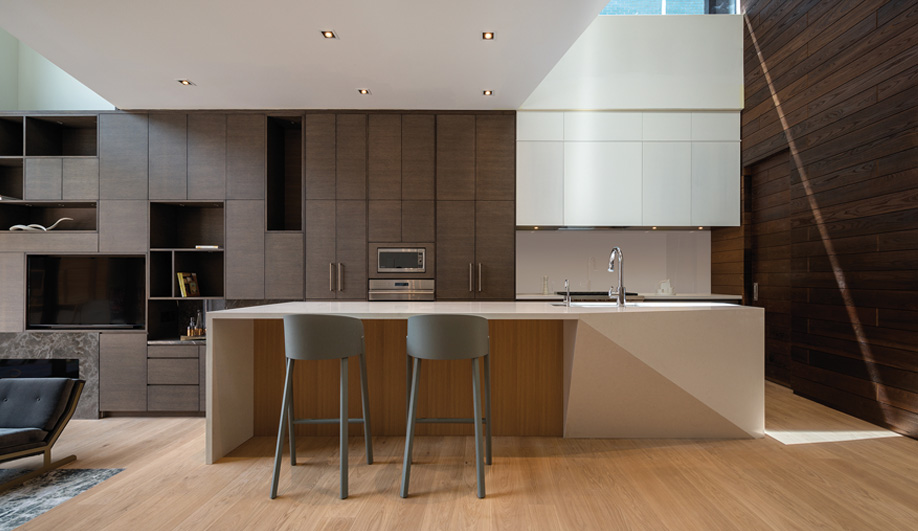 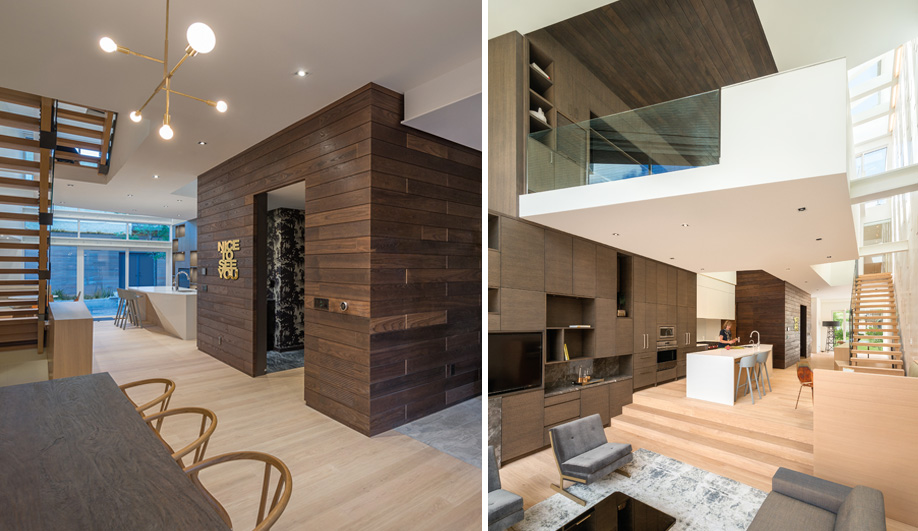 Left: Near the front entrance, planks of North American ash conceal the elevator and a powder room. Right: The living area, three steps down from the kitchen, features built-in shelving made of stained rift-cut oak. Natural oak planks cover the floor. 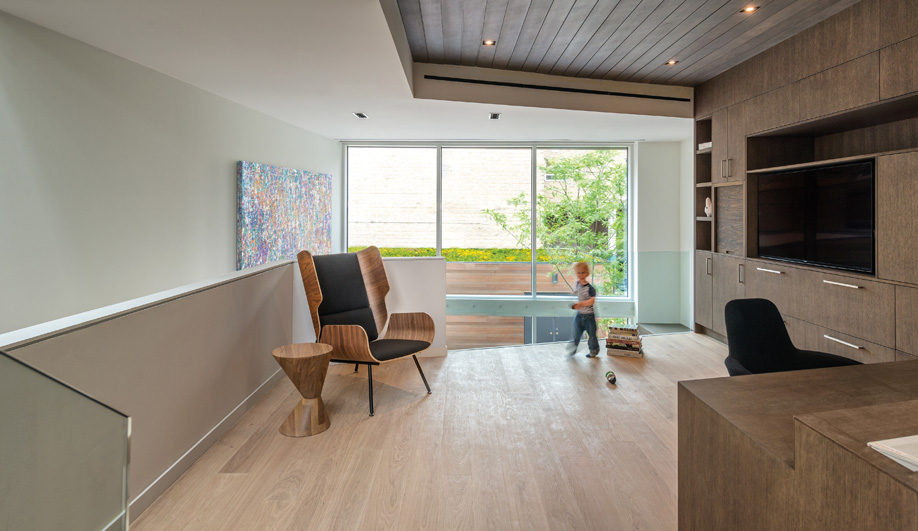 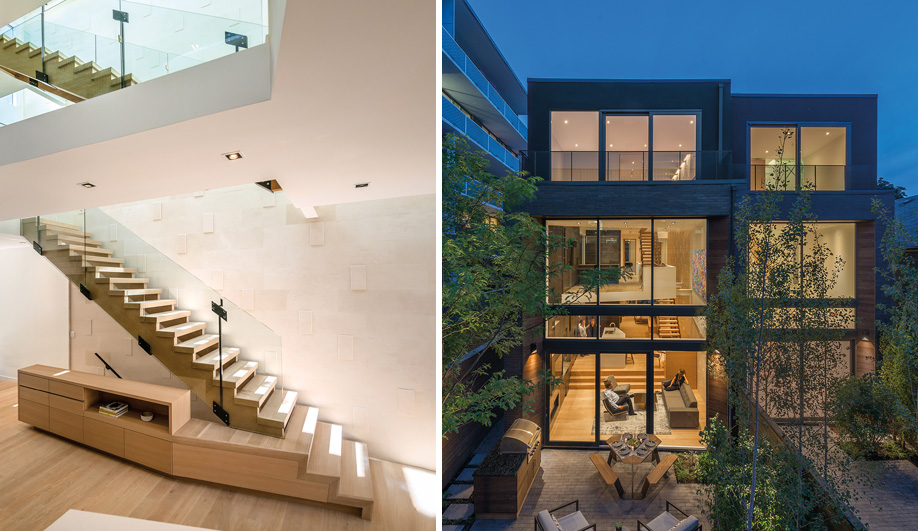 Left: Automated blinds can cover the skylights above the stairwell. The glass is angled to allow for snow runoff. Right: Even though Relmar House is surrounded by residential buildings, the glassed-in rear section offers enough privacy that it doesn’t need curtains. 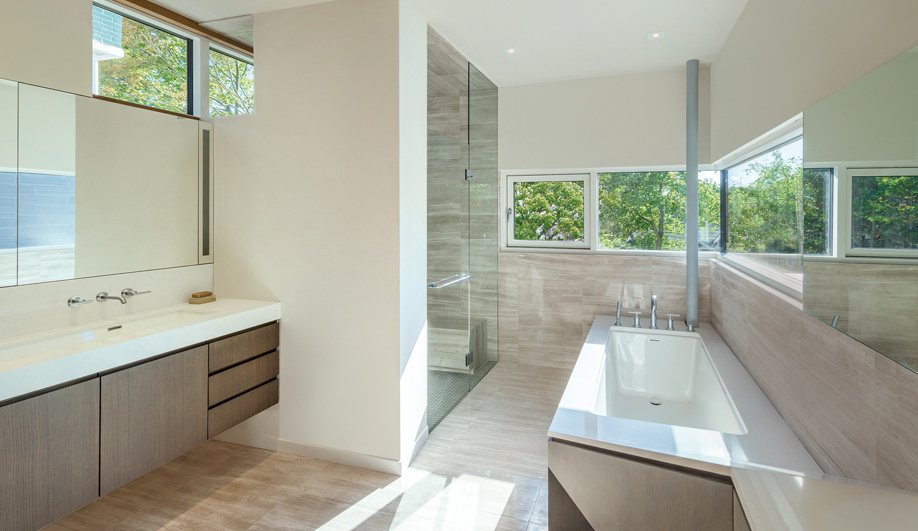 Among the details added to make the master bathroom hazard-free is a built-in bench in the shower. 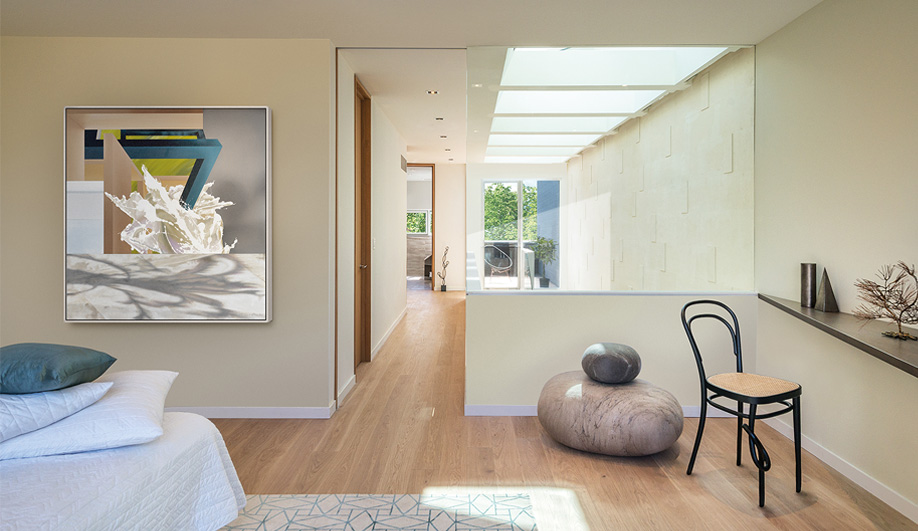 The master bedroom and a small balcony occupy the third floor. Knot chair by Thonet.

For an empty-nester couple, Luc Bouliane finds simple but effective ways to integrate features for aging in place without compromising on beauty.

When Jan and Brian Bornstein’s grown children moved out, the couple sold their house and moved into a lower-­maintenance condo. However, they quickly realized that vertical living wasn’t for them, so they bought another house. This time, though, they commissioned Toronto architect Luc Bouliane to design a semi-detached that would feel comfortable no matter how old they got. The Bornsteins experienced first-hand what various studies have indicated for years: most people over 55 prefer to live out their remaining years in their own space. But most houses are not designed to adapt to changing lifestyles, when seniors find stairs harder to climb and they spend far more time indoors.

The new house, a modernist outlier on Relmar Road in Toronto’s leafy Forest Hill neighbourhood, anticipates those changes and others. The home is specific­ally built to grow old in. Central to that concept is a Cambridge hydraulic elevator, large enough to contain a wheelchair, that connects the basement to the three upper levels.

The bathroom walls have an underlayer of plywood blocking, so handrails can be added without ripping out the plasterboard. One of the biggest issues for seniors is falling, and additions such as handrails can prevent catastrophic slips. As well, a 20-­centimetre-wide quartz ledge runs along the lip of the bathtub, which allows for ease of entry, and the showers have built-in benches with radiant heat and slip-resistant glass tiling.

If a live-in caregiver is required, the basement, with its 2.74-metre ceilings and full bathroom, can easily be converted into a single-floor dwelling. It is also equipped with a gym, a spa and a steam room.

During the winter months, there is no need to contend with snow or treacherous ice: coils of plastic tubing carry heated glycol beneath the walkways to melt the ice. A gas-­powered Kohler generator on the green roof auto­matic­ally clicks on during power failures, providing enough energy for the owners to live off of the grid for days at a time.

For Bouliane, however, accessibility is not just a matter of high-tech amenities. It’s also about quality of place. “When you’re post-60 and in the house all day long,” he says, “it’s important that the interior is as bright and friendly as possible.” The house is rectilinear but cranked – a box that has been twisted at the hands of a giant. “We’re con­tem­por­ary in terms of our design, but we don’t take the rigidity of minimalism to heart,” says the architect, who worked closely on the project with Erik Bornstein, the owners’ son and manager of the building firm Mazenga.

Bouliane’s design flexibility enabled him to optimize space and light. A corner of the kitchen island is cut off to maximize floor space, and the southern wall of the west-facing balcony is set at an imperfect 95-degree angle to catch just a bit more of the late-day sun.

To brighten the interior, the open stairwells, which run along one side of the home, sit beneath an atrium topped with six triple-glazed skylights, each angled at 21 degrees to ensure maximum light penetration. As you move upward, each staircase is offset farther away from the limestone-clad structure, enabling sunlight to bounce off the expansive wall and illuminate all three floors.

Bouliane grew up on Lake Superior, and he often conceptualizes his projects using natural or geological metaphors. For him, Relmar House resembles a geode – a rough stone with a shimmering interior. It is mainly clad in grey Yankee Hill brick, Eramosa limestone, or Thermory wood, a dark North American ash that is baked at 400° C to make it dry and tough. The simple materials give the dwelling a ­sombre elegance and a feeling of geological durability. Inside, the space offers plenty of built-ins, including white oak cabinets, benches and tables, which ensure that the owners won’t have to lug furniture up the stairs. “This house is going to look extremely current years from now,” says Bouliane, “and to keep it that way, the owners won’t have to do much except live in it.” ­