The Future of Food at Expo Milano
Five outstanding pavilions at Expo Milano - which wraps up at the end of the month - capture the scale and reach of our global food network. 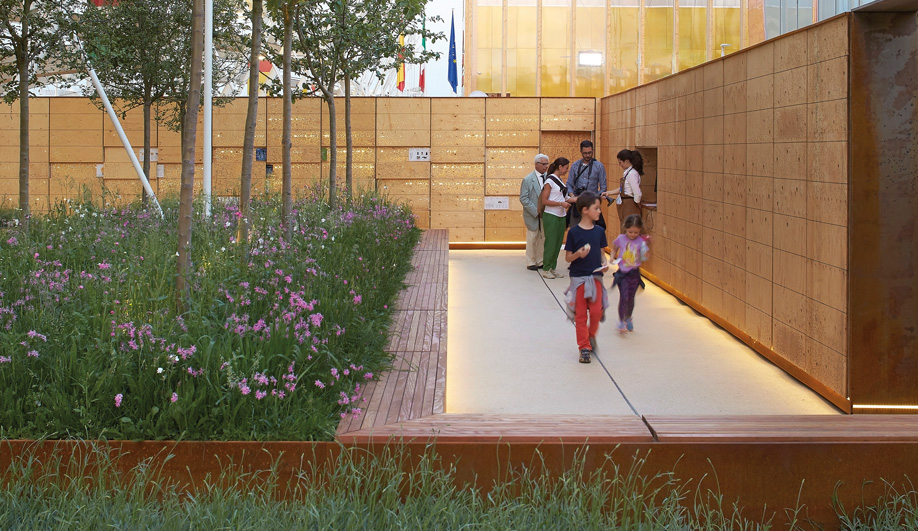 Five outstanding pavilions at Expo Milano – which wraps up at the end of the month – capture the scale and reach of our global food network.

Frites, fromage, cocoa, rice and sake are some of the foodstuffs that have found shelf space in Milan. Given Italy’s obsession with eating, it’s fitting that the Northern Lombard region is hosting the 2015 iteration of World Expo: Feeding the Planet, Energy for Life, which opened in May.

The relevance of world expos today may be questionable. They are often criticized for being more commercial than cultural affairs, but to see the heart, soul and cravings of 145 nations worldwide, all in one place, is undeniably impressive. Fifty-four pavilions represent a varied and visually stunning selection of international architecture and multi-sensory culinary experiences, five of which stand out beyond the rest: Bahrain, Chile, France, the United Kingdom and the United Arab Emirates.

By the time the show closes on October 31, an estimated 20 million tourists and locals will have discovered endless food districts while strolling the central boulevard, which stretches for 1.5 kilometres. Splashy pavilions tower over more basic structures, while construction methods incorporate both high- and low-tech materials, including mirrored awnings, bamboo roofs, extruded surfaces, tents, trellises, terraces and curved green walls. The organizers stressed the importance of using recycled materials and encouraged countries to repurpose their pavilions afterwards.

Farming, agriculture and biodiversity are dominant themes, with each nation pondering population growth, sustainability, and how to feed the world’s 7.3 billion people; by 2050, that number is expected to reach nine billion. Scarce natural resources, including water and energy, are also paramount in the displays, with the inevitable question of what we will eat and drink in the future, and for how long. Most importantly, Expo Milan 2015 promotes respect for farming at a time when we can no longer ignore the ongoing global food crisis. Food for thought indeed. 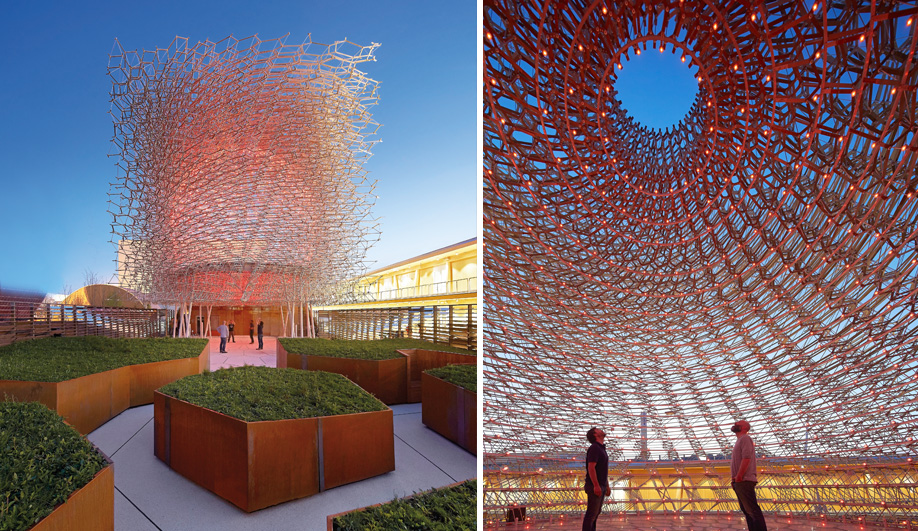 1 U.K. by Wolfgang Buttress
The United Kingdom’s message was broadcast via a massive, buzzing hive, signifying the life cycle of bees and the import­ance of pollination: it plays a part in 90 per cent of the food we eat. British artist Wolfgang Buttress worked with an apiculturist to craft the hexagonal lattice, which mimics honeycomb construction. The impressive undertaking, built by Stage One, embodies the themes of pollination and sustainability in a visceral way that awakens all of the senses. Visitors enter through a meadow of heather, buttercups and sorrel – and the 14‑metre-high aluminum structure is embedded with LEDs that blink in response to a live audio feed from a beehive located in Nottingham. 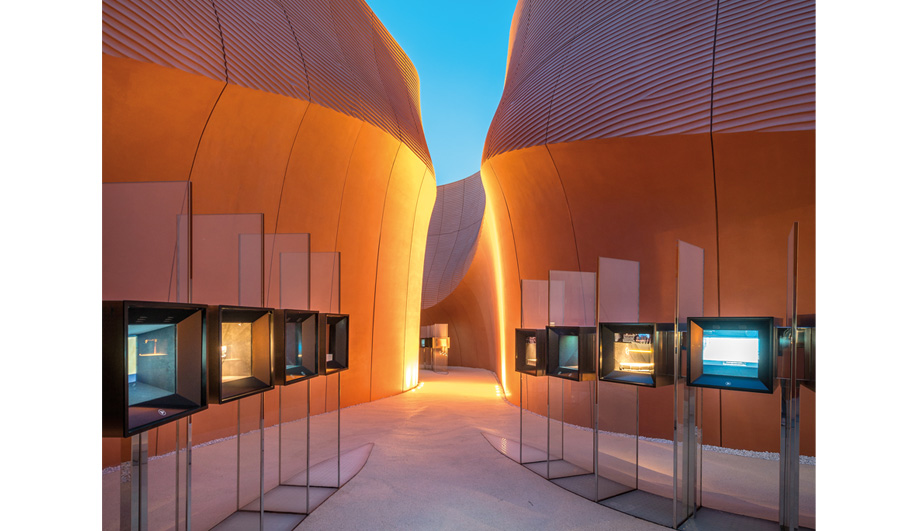 2 U.A.E. by Foster + Partners
The rippled terracotta walls of this beautiful pavilion by Foster + Partners are based on photographs of sand dunes, with parts of the roof undulating down as if swept in the wind. A narrow ramp leads from the main entrance to the first courtyard, where an exhibition of glass cube vitrines – with themes of land, energy, food and water – highlights 12 challenges facing the United Arab Emirates, including water supply (some 70 per cent of water used in the desert country comes from groundwater). Constructed from 903 glass-reinforced concrete panels 12 metres tall, the pavilion will have a second life when it’s dismantled and moved to Masdar City, Abu Dhabi, to function as a visitor centre. 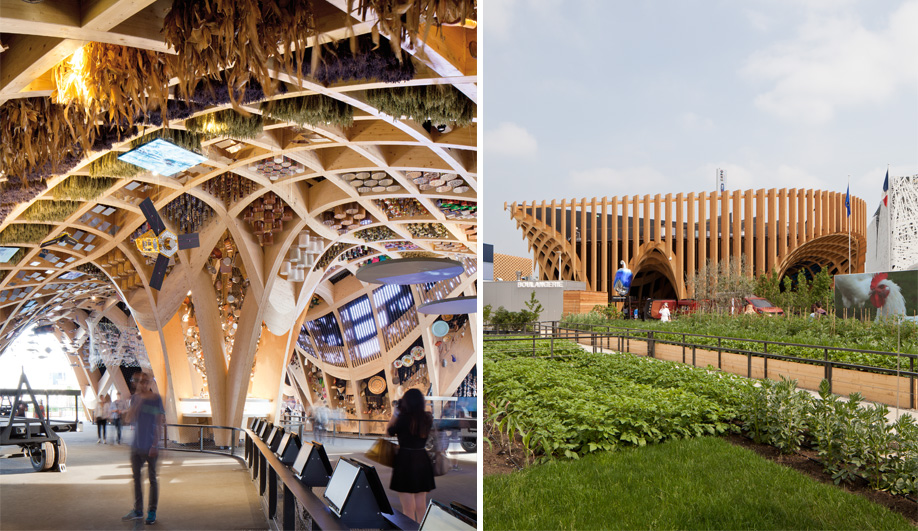 3 France by X-Tu architects
Delicacies abound at the sensory-rich French pavilion, where samples of saucisson meet visitors at the entrance. The scent of fresh baguettes wafts from the ground-floor market (the average Parisian now eats half a baguette a day compared with more than three in 1900). A touch of vertigo is induced when one gazes up at the inverted roof, crafted out of interlocking planks spliced from spruce and larch from the Jura region. The roof multi-tasks as a giant trellis, with plants and herbs creeping up the side; fragrant bunches of lavender dangle upside down, and hop vine seedlings will be harvested at the end of the expo. Engaging interior exhibits follow the country’s distinct geography and terroir. 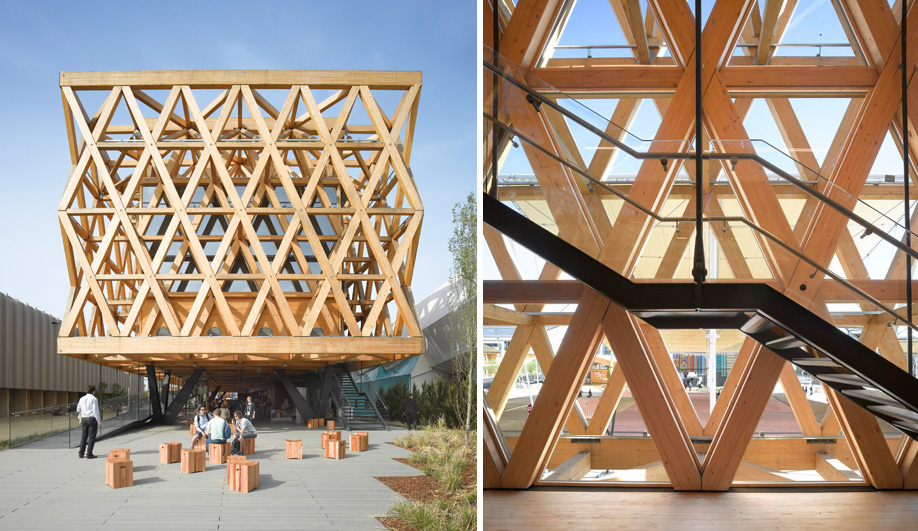 4 Chile by Undurraga Deves Architects
The South American country’s food and wine exports are paramount in this beguiling crossbeam pavilion – a veritable matrix that explores the nation’s diverse territory, from mountainous Patagonia to the arid Atacama Desert. Chile’s wine history is fascinating, with the first vineyards planted in 1554 by Spanish Catholic missionaries. Visitors ascend a moving ramp to the second floor, where a series of films portrays food producers and the land they love through the theme of El Amor de Chile. In the ground-floor restaurant, a hand-carved table made of lenga wood runs for 49 metres through a relaxing space where everyone congregates to taste the country’s distinct flavours. 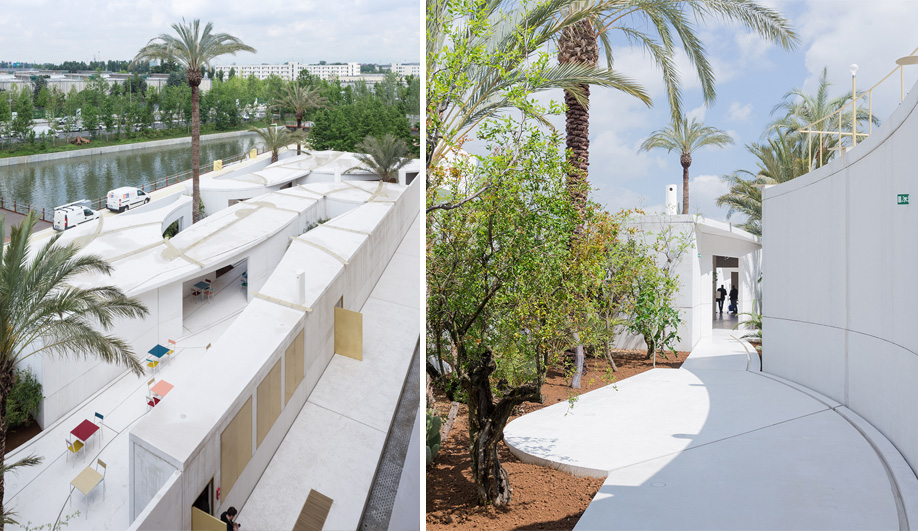 5 Bahrain by Studio Anne Holtrop
A lush tropical fruit garden – inspired by archaeological ruins at the Temple of Barbar and honouring a water god called Enki – is planted within an elongated pavilion by Amsterdam’s Studio Anne Holtrop. The theme Archaeologies of Green highlights the tiny archipelago’s rich agrarian heritage, and its location east of Saudi Arabia in the Persian Gulf. The white-walled interior gardens abound with native trees, including banana, lemon, papaya, grape and fig, which will bear fruit during the fair. The elegant structure, built from 350 prefab panels connected by dry joints and brass fittings, will be shipped back to Bahrain and repurposed for a botanical garden installation.

Melissa Feldman’s visit to Expo Milano was sponsored by Illy.