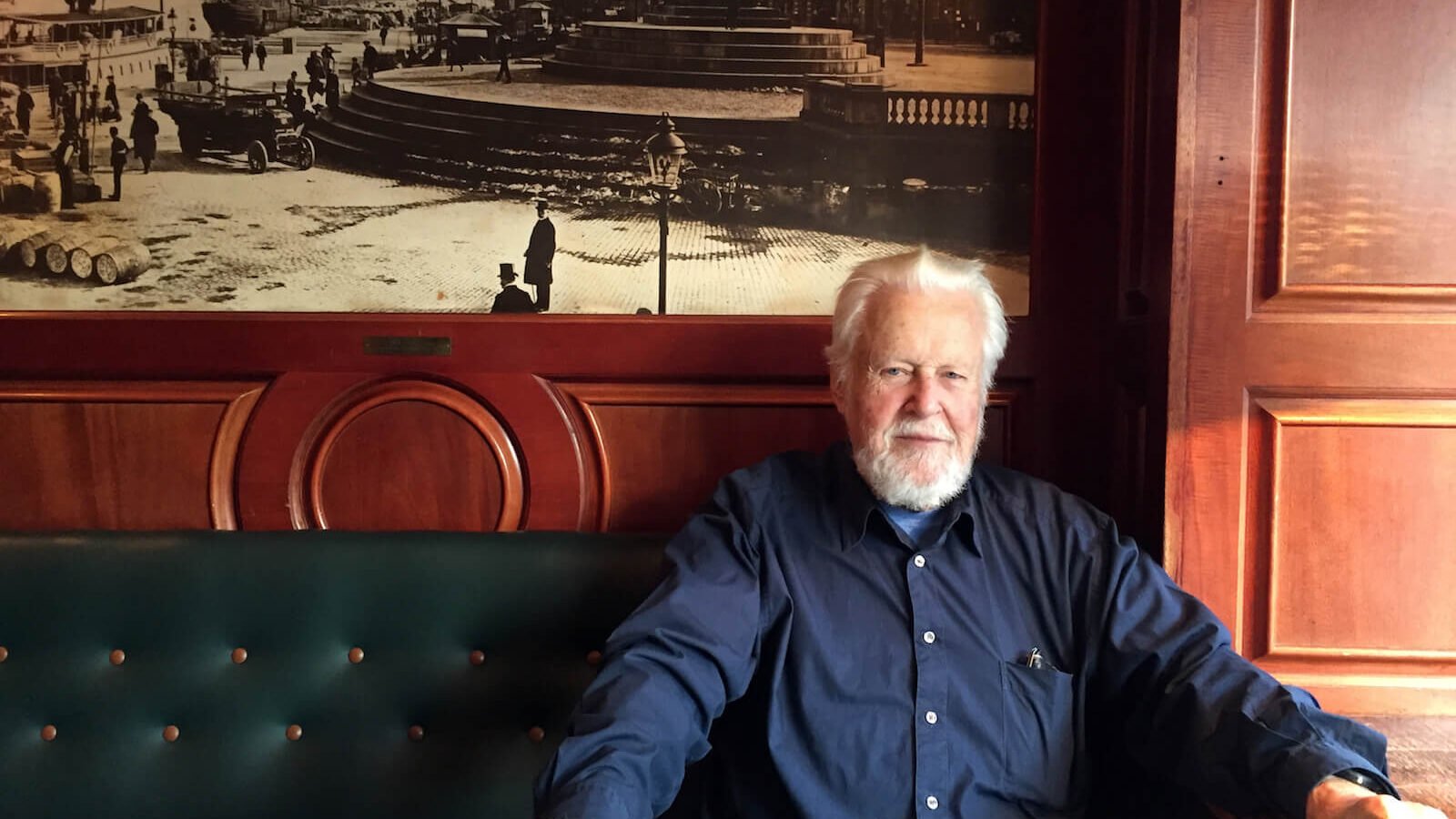 The Man Who Brought Finnish Design to Toronto

In July, Toronto lost the creative spirit that was Janis Kravis. An architect who also designed products and interiors, the Latvian-born Kravis established a groundbreaking retail space in the swinging sixties: Karelia. It was the city’s original concept store – where art, lifestyle and shopping converged.

Kravis arrived in Canada as a teen (after he and his family spent several years in Sweden as refugees) and went on to graduate in architecture at the University of Toronto in 1959. Soon thereafter he was working with the Modernist firm of John C. Parkin and socializing with Viljo Revell, the Finnish architect who won the international design competition for Toronto’s new City Hall, and Revell’s friends from home. Through these relationships, he familiarized himself with objects by the likes of Alvar Aalto and the brands Arabia and Haimi, which the Finns brought with them to furnish their temporary homes in Toronto.

At 24, Kravis sold his secondhand car to travel to Finland, where he was further welcomed by Armi Ratia, the founder of Marimekko, maker of colourfully patterned prints incorporated into fashion and housewares, and her early creative team. Having secured exclusive Canadian licenses for many Nordic brands, as well as other European furniture lines he encountered, Kravis showcased them at Karelia upon his return to Toronto.

His store, opened in 1960, was the hub for Toronto’s mid-century creatives. Today, if you walk into a house or a commercial space and see things from Karelia, you will be drawn back to that time when a new generation was leading the march of a future-forward city – which was helped by the radical, and controversial, new City Hall – and the modernist idea that design should be part of everyday life.

Karelia was named after the region in Eastern Finland that Marimekko’s Ratia hailed from. Its first iteration opened on Bayview Avenue in the reception area of a hair salon. It evolved into Karelia Studio, a location on Gerrard Village, before becoming the Karelia store and studio, first on Front Street, then – and finally – inside the Manulife Building. At the time, Toronto was a staid, homogeneous city; Karelia was one of a handful of new shops that helped shake off that wan reputation. In fabric and in room design, it introduced the colour combinations of the era – such as royal blue, red and orange – that would replace the mint greens and First Lady Pinks of the 1950s. It sold furniture from brands such as Artek, Muurame, Yrjö Kukkapuro, Iittala and Fiskars, as well as furniture pieces Kravis designed himself.  And it was festooned with Marimekko textiles.

“I remember big swaths of Marimekko and the women dressed in Marimekko,” Kravis’s son Guntar Kravis recalls. Customers, buying or not, were encouraged to sit on the furniture and explore their possibilities and to learn design philosophy. On Saturday mornings, there would be lineups of hip young Torontonians, including key players and future notables in Toronto architecture – names such as Markson, Levitt, Rebanks and Zeidler – who just wanted to hang out and shop. “I met Jack Diamond and Macy DuBois there,” architect Leslie Rebanks recalls. “So many people in the design community met each other at Karelia.”

Janis Kravis, facing the camera, at one of his showroom parties.

They also came for the fashion shows and launch parties – mod partygoers sitting on mod chairs like something out of a Blake Edwards film. “Everyone was smoking, and there was food, and they would invariably end up dancing,” Guntar Kravis remembers. Karelia branches were later opened in Vancouver’s Gastown neighbourhood and in Edmonton. These stores, too, became places for like-minded modernists to convene.

With its coffee bar – the first in a retail space – and a corner section selling books on art and architecture, Karelia was a cultural touchstone in many ways. Its commercial posters were noted for their great graphics and have since achieved a certain level of collectible status (along with early Marimekko and Aalto posters back in Finland). The Karelia font, created by in-house designer Malcolm Waddell, is almost shorthand for late ’60s, early ’70s aesthetic.

A who’s who of Toronto designers and architects would attend Karelia’s legendary parties.

Beyond Karelia, Kravis made a name for himself as a furniture and interiors designer. At the then-new Scarborough Town Centre, Kravis hung Marimekko acrylic panels in the atrium in such a way as to allow light to shine through, creating kaleidoscopic patterns on top of graphic design textiles. (Kravis was also one of the first to introduce the idea of using fabric panels as room dividers.) In true 1970s style, he created mushroom chairs for the mall’s food court area. Their playful look and sturdy design – their bases were filled with sand – have helped them become icons of public space dining.

But his biggest design feat came in 1965, when he conceptualized the interiors for Three Small Rooms at the Windsor Arms Hotel. The establishment, owned by George Minden, was delineated into three parts: a grill, a formal dining room and a wine bar. Representing a revolution in food and wine, and design, it soon became the place to be in Toronto. It featured a rotating, food-forward menu that nixed Toronto fixtures such as roast beef and shrimp cocktail in favour of French classics like Malpeque oysters and rack of lamb poélé.

The interiors broke rules, too. Minden’s vision was to utilize a residual space that wasn’t being optimized for commercial use. Announced with a big orange-and-white sign, the entrance to the restaurant was off to the side, where customers descended flagstone stairs along a Brutalist, board-formed concrete retaining wall to access the wine bar. Once inside, they would encounter a series of visual experiences. Architect Bruce Kuwabara characterized it as an “intriguing journey on different levels.”

“The roughness of dark chocolate brick walls, the lightness of slatted wood planes in the ceilings, the earthiness of quarry tile floors, the sparkle of the metal lighting frames, the sumptuousness of leather banquettes, and the high-touch feeling of the Wegner chairs created an atmosphere that was immersive and intimate,” Kuwabara recalled.

Kravis designed almost everything: from the tables to the wine coolers, from the bottle racks to the bread baskets. And he curated the rest, bringing in china by Finnish modernist Tapio Wirkkala for Rosenthal and silverware by Beard of Montreux in Switzerland. As part of the commission, he also created one of his most noteworthy pieces – the Three-Legged Chair. The luxurious yet comfortable piece, conceived for the main dining room, represented a collaboration with master cabinetmaker Garry Sonnenberg of Craftwood Products and master upholster Eddie Kielhauer. The chair demonstrated Kravis’s penchant for the simple lines of Scandinavian design, with their often-playful components.

The Three-Legged Chair that Kravis designed for Three Small Rooms.

Three Small Rooms lasted 25 years. When it was demolished, the design community railed against what it perceived as a travesty: that iconic interior spaces such as this weren’t designated heritage status. “Three Small Rooms was one of the finest interiors Canada has ever seen. It should have been preserved,” Leslie Rebanks has said.

Karelia faced a similar fate. After an ill-fated expansion, undertaken at the onset of a recession, and due to the economic decline itself, the store closed down in 1980. Kravis went on to complete several architecture projects, including his own family residence and cottages in lake country. In 2013, he invited the public to revisit the iconic objects from his Karelia archives through the exhibition “Marimekko With Love” at The Textile Museum of Canada in Toronto; over the next few years, the exhibit would travel to Victoria, B.C., and Seattle.

Kravis will be remembered as a change-maker in an era when Toronto the Good became Toronto the Cool. After his passing, Bruce Kuwabara put it most poetically: “Within this swinging scene which intersected with the social and cultural revolution in politics, music and the arts, Janis Kravis brilliantly impacted the design and food culture of Toronto.”