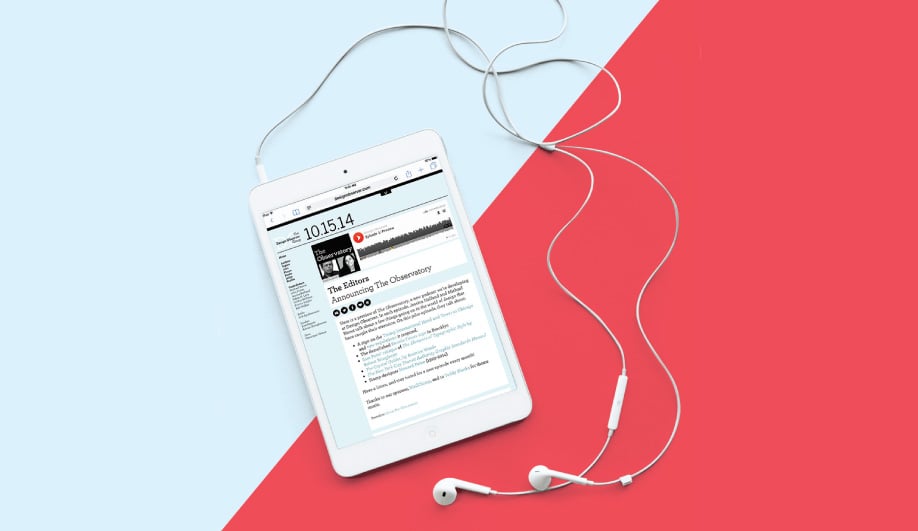 Radio as a medium is in a state of full-on revolution. Podcasts like This American Life and Serial are carefully crafted auditory experiences whose creators work diligently on every sound wave that emanates from the headphones or speakers of the millions who tune in to every new episode. On the other end of the spectrum, dialogue-driven shows spin an intimate web of (usually one-sided) conversation, drawing avid fans into lengthy discourses of unexpected and humorous digressions.

The Observatory, hosted by Yale lecturer Jessica Helfand and Penta­gram’s Michael Bierut, is the half-hour podcast of the Design Observer, a popular blog. The monthly show promises banter between Helfand and Bierut about “a few things going on in the world of design that have caught our attention.” It’s a discussion between two deeply knowledgeable professionals across subjects from the controversial signage on Chicago’s downtown Trump Tower, to the famous (at least within design circles) Graphics Standards Manual for the New York City Transit Authority, published by Massimo Vignelli and Unimark International in 1970.

The last point is perhaps the most telling indicator of The Observatory’s focus. This is not a podcast aimed at a design dialogue with universal reson­ance. It’s a stripped-down back-and-forth between two insiders rooted in the recesses of New York design culture and history. Contrast that with, say, Roman Mars’s 99% Invisible; or Radiolab, whose genius lies in its hosts’ ability to draw their audience in to complicated concepts through engaging story­telling and lush editing.

We’ve all had the experience of listening to experts discussing their craft with detail and even cool detachment. At one moment, we’re fascinated by the exchange of deep knowledge. In the next, they go so far into the specifics of their subject matter that we feel forgotten and are left to listen from a distance. The Observatory, for better or worse, is just such an inside take on design world news.

Paddy Harrington is the founder of  Frontier, a Toronto design magazine and studio.