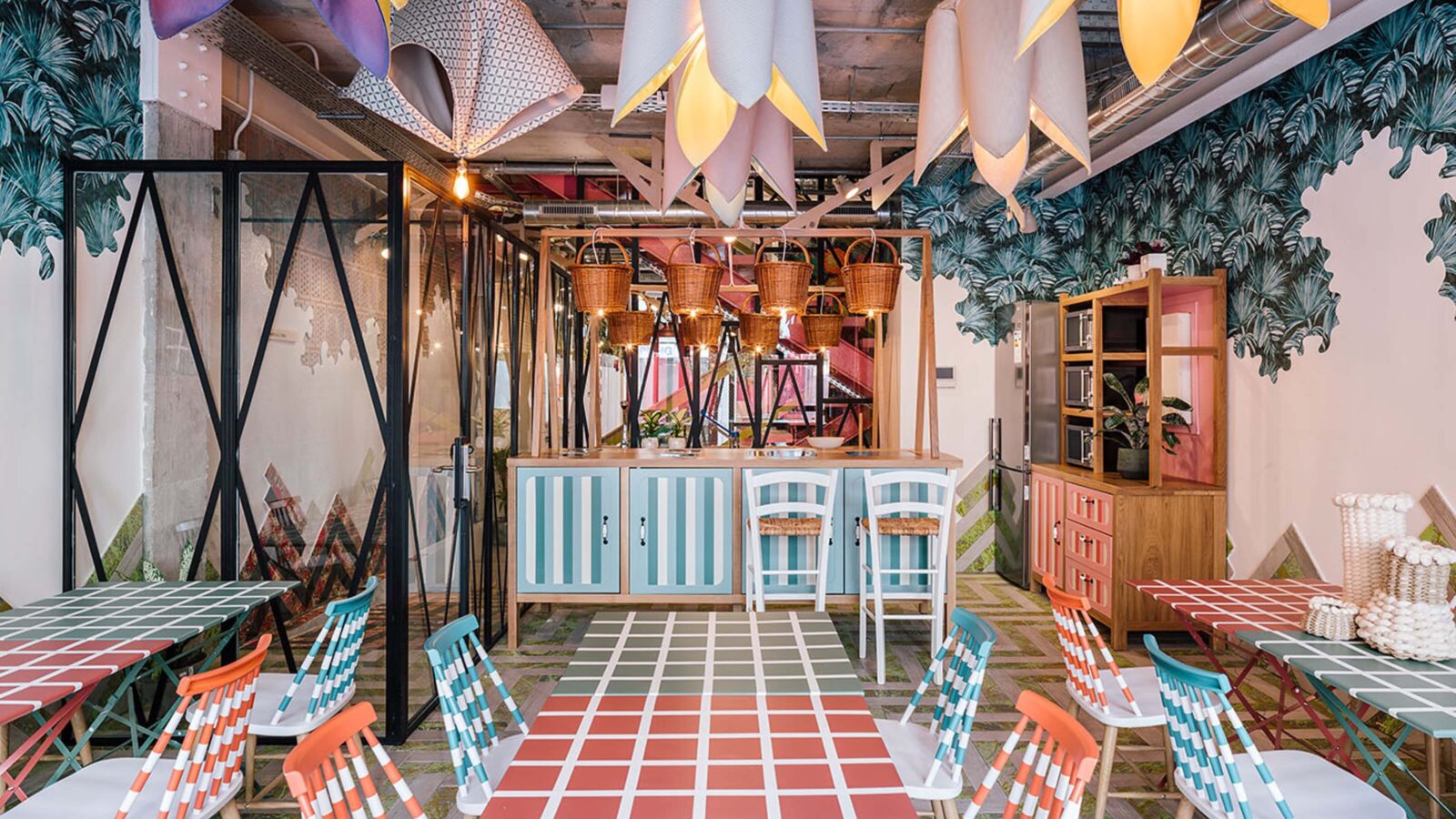 This Barcelona Co-Working Space is Bursting with Colour

The new Clementina co-working space in Barcelona is a riot of colour, pattern and texture, inside and out. While it feels exuberantly contemporary it is also a product of its place. The 384-square-metre building, part of the design-conscious Utopicus co-working chain, is situated in the Gràcia neighbourhood. Until the 18th century and before its annexation by Barcelona, this area was an independent rural town populated with Catalonian-style masía homes, convents and manors. Although industrial buildings slowly crept into the rural fabric, the district has retained its flavour. As the firm states: “There exist buildings unknown to the vast majority filled with undeniable beauty and uniqueness.”

One of those buildings, actually quite well loved by the vast majority and located only 150 metres from Utopicus Clementina, is Antoni Gaudí’s UNESCO-protected Casa Vicens. Completed in 1884, the house is a masterwork of ceramic artistry. And this is perhaps the main inspiration for Clementina.

After all, Izaskun Chincilla’s currency is colour. The 44-year-old architect and her Madrid firm previously created a co-working space for Utopicus, in Madrid, in which they playfully hacked IKEA furniture and inserted bursts of colour and pattern. The firm moved into the space and has been headquartered there since 2016. It is also known for its City of Dreams pavilion, temporarily installed on New York’s Governors Island in 2015 and made exclusively out of recycled materials: a massive bouquet of bright umbrellas, used stools and bike parts.

For Clementina, the firm took ceramics as its point of departure and put it to joyful use on the facade and in the interior. The team collected used ceramics that would be easy to maintain and yet boasted high artisanal quality; they then glazed them in patterns that bore resemblance to tile work typical of the area.

Inside the space, the walls and floors are given over to expressive floral and geometric motifs – patterns that bloom and erode in a deconstructed assemblage – and the furniture incorporates a whimsical aesthetic. There is a jumble of boxes providing storage as part of a desk system, and an exaggerated tablecloth pattern applied to everything with four legs in the communal dining room. A variety of creative light fixtures, including a series of baskets that double as pendants, are strung throughout. And colour emerges from unusual places: for instance, a macramé tapestry is woven into the staircase railing.

Another aspect of the design is its ode to sustainability – a calling card of the Utopicus brand. Besides the plants and trees integrated throughout, the building incorporates a photovoltaic system and passive ventilation techniques. In the “secret” back garden a single clementine tree finally points up the name of the place.

For more inspiring workspaces, get your hands on Azure’s June 2019 issue, on newsstands.