Thomas Heatherwick’s Vessel: Public Amenity or “Playground for Billionaires?”
The designer's expensive plan for a "staircase to nowhere" in NYC has inspired a mix of rants and raves. Here's why. 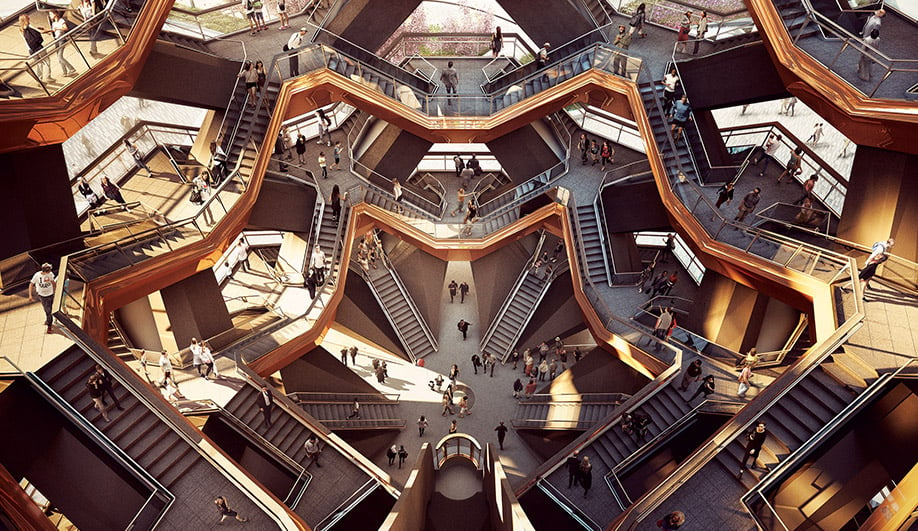 The designer’s expensive plan for a “staircase to nowhere” in NYC has inspired a mix of rants and raves. Here’s why.

A sculptural knot of staircases is set to rise amidst the boxy forms of Midtown Manhattan, as if M.C. Escher decided to get into the real estate business. Vessel is a not just a staircase to nowhere, but 154 interconnected flights woven into an “impossible construction” by U.K. designer Thomas Heatherwick. In a dense city packed with apartment dwellers, this public structure will be a place for exercise and daily constitutionals.

New York already has precedent for this sort of thing; in Times Square a striking red staircase to nowhere reaches over the TKTS theatre tickets booth. And closer to Hudson Yards, where the US$150-million Vessel will rise, is the High Line, a popular urban pilgrimage for visitors and residents alike. Such multimillion-dollar trophies – part park, part sculpture – are becoming the norm, even the expectation for alpha cities, but they are not without critics.

Just around the corner from Vessel’s proposed site, another Heatherwick project, Pier 55, is underway. This US$130-million park on pillars, which floats above the Hudson River, has met opposition. In London a third Heatherwick creation, the Garden Bridge over the Thames, has roused similar unease. Critics of both projects point to the high costs of these “playgrounds for billionaires” in cities that are increasingly expensive to live in and where austerity budgets rule.

Vessel’s appeal is much like that of scaling a mountain. Visitors will climb to the precipice and take in the view with a sense of ownership born from the effort it took to get there. But this is not a true public space. There will be no protests here; it will be kept sparkling clean, without the patina of urban life found in the rest of the city.

In these precarious times of unaffordability in our great cities, these kinds of projects have a whiff of oligarchy about them, as financial backers decide which neighbourhoods get these treats, and as private security is enlisted to control the spaces. Yet people need whimsy, and surely we deserve beautiful design (even if it is sometimes confounding) in our cities. And everybody likes a good view. Thomas Heatherwick’s Vessel will carry many things, including the tension of its own role and responsibility in the city.