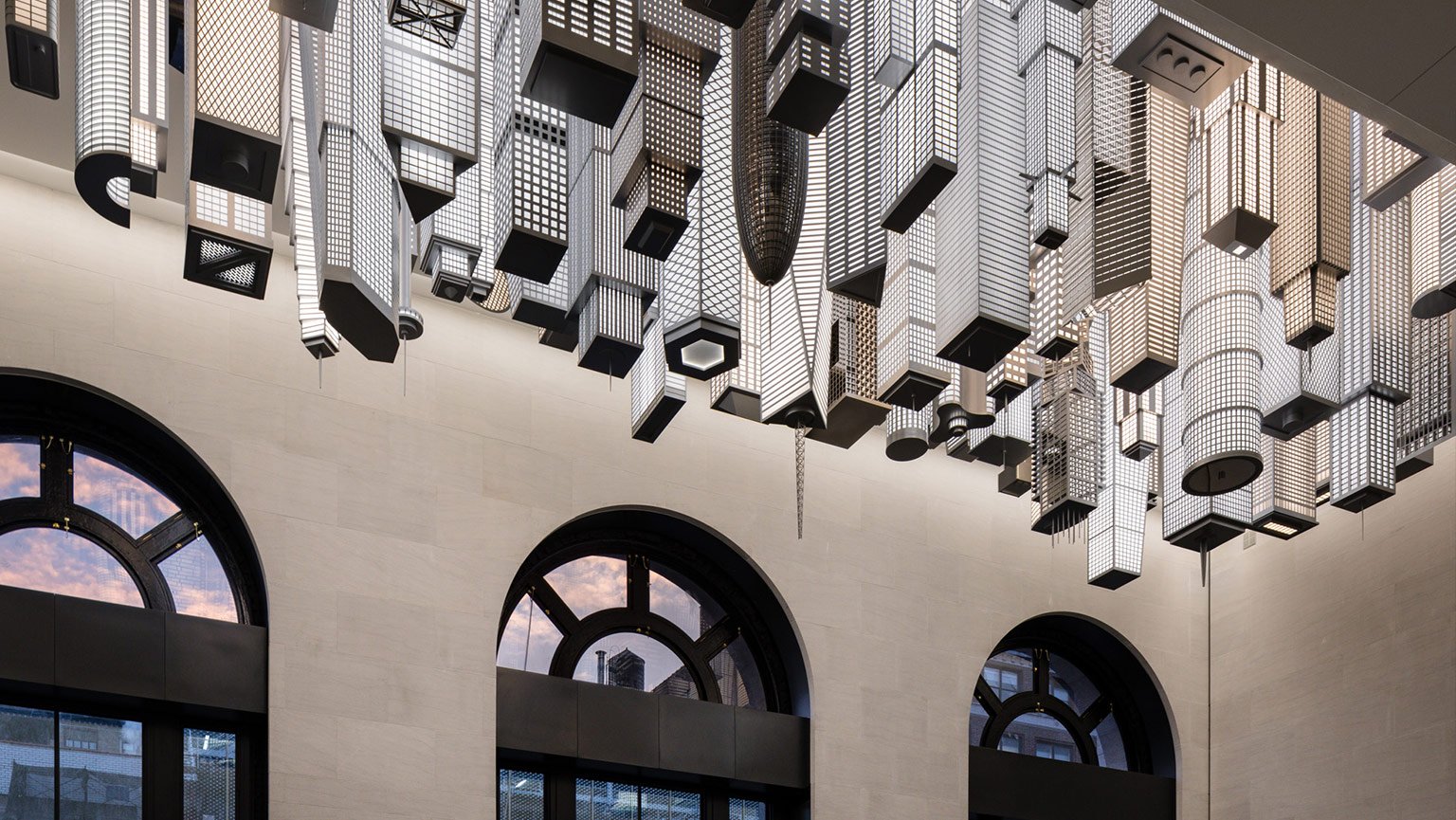 One way to get the WFH crowd excited about trekking back downtown during morning rush hour? Fill their journey with great public art.

As workers make their eventual return to the office, they might just find a modern masterpiece installed along their daily commute. To mark the opening of notable new subway, train and bus stations, London, New York and Toronto recently commissioned a trio of bold public artworks. Each installation builds upon the urban character of its setting to bring a deeper sense of place to a transitory environment.

So while we admit that waking up to catch the early train on Monday mornings can be a drag, having a healthy dose of inspiration to look forward to as you wait for your ride could be just what it takes to start the week off on the right foot. 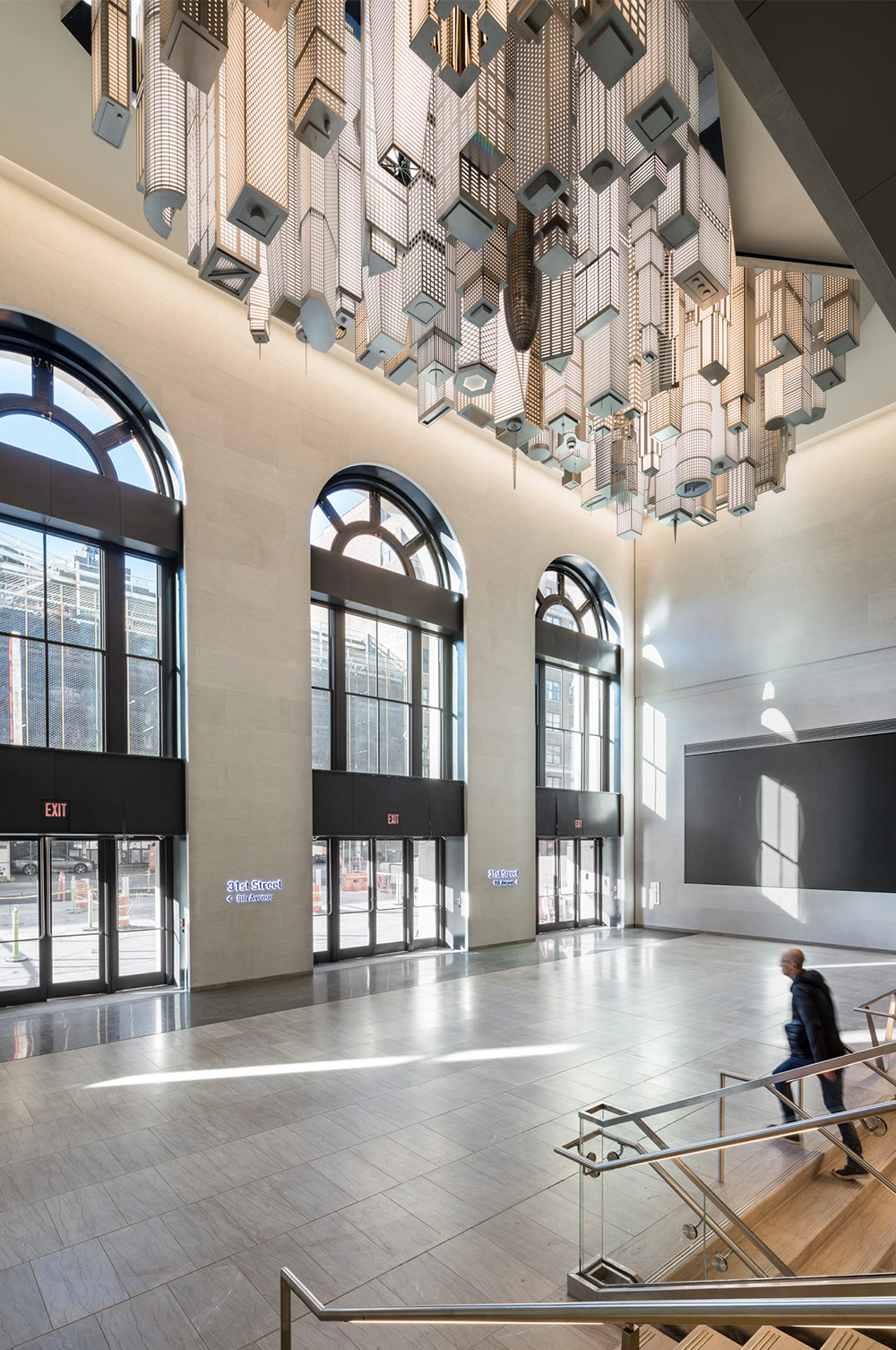 A popular trope in supernatural action movies involves a character flipping the world on its head so that up is down and a city’s skyscrapers appear to be descending from the heavens. (See: Inception, Doctor Strange and by the looks of it, the latest Spider-man movie.) Now, Berlin-based artistic duo Elmgreen & Dragset has made this special effect a permanent fixture of the Big Apple. 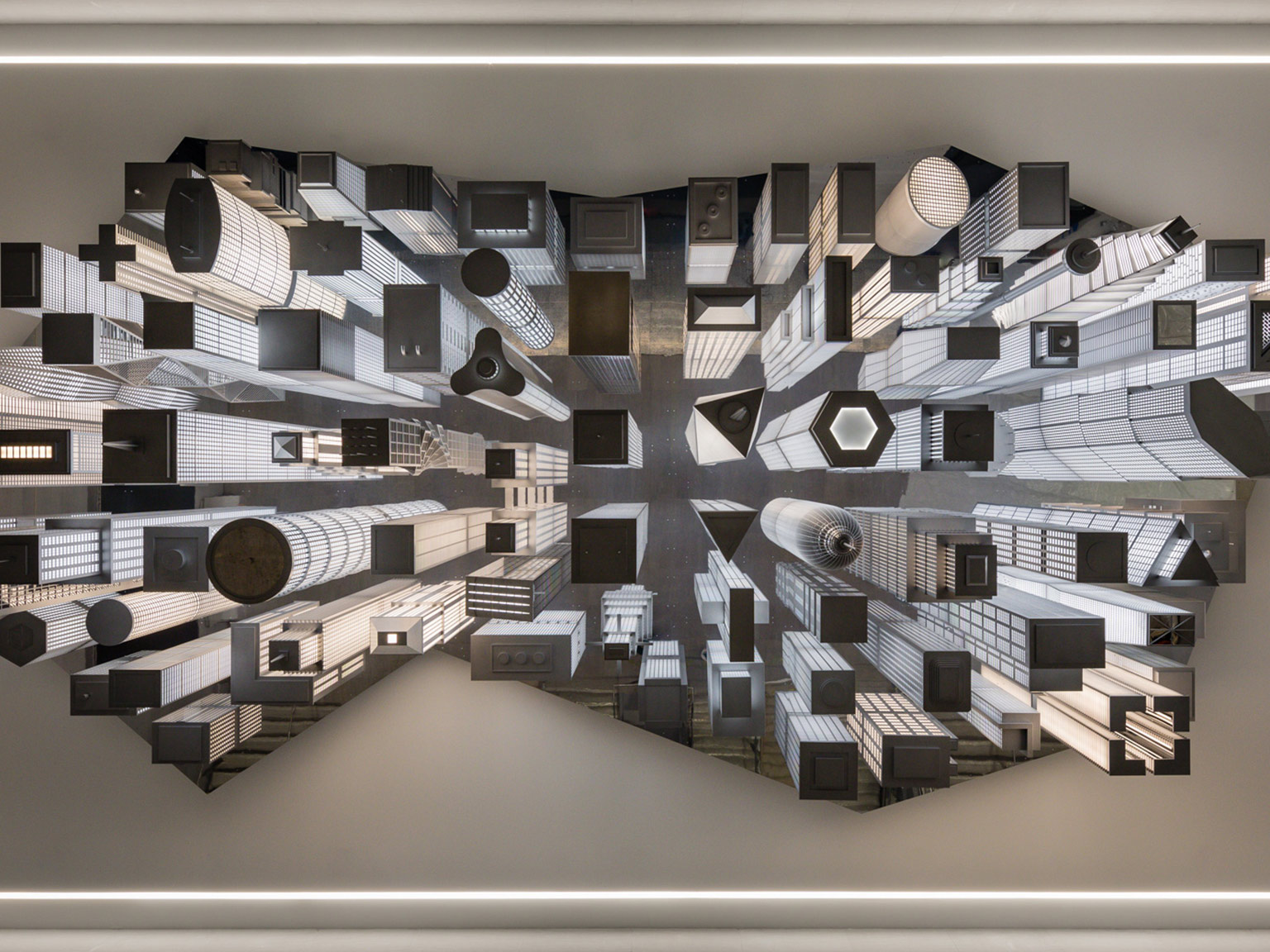 Installed inside the 31st Street entrance to Pennsylvania Station’s new Moynihan Train Hall, “The Hive” presents 100 aluminum stalactites modeled after Manhattan’s soaring towers. As a reminder that all those buildings mean little without the people who inhabit them, these sculptures hang from a mirrored base plate that invites viewers to look up and see themselves reflected in the installation’s miniature urban landscape. Ultimately, the piece is also a testament to the unexpected magic that awaits in the urban realm outside — especially if a Marvel movie is filming that day. 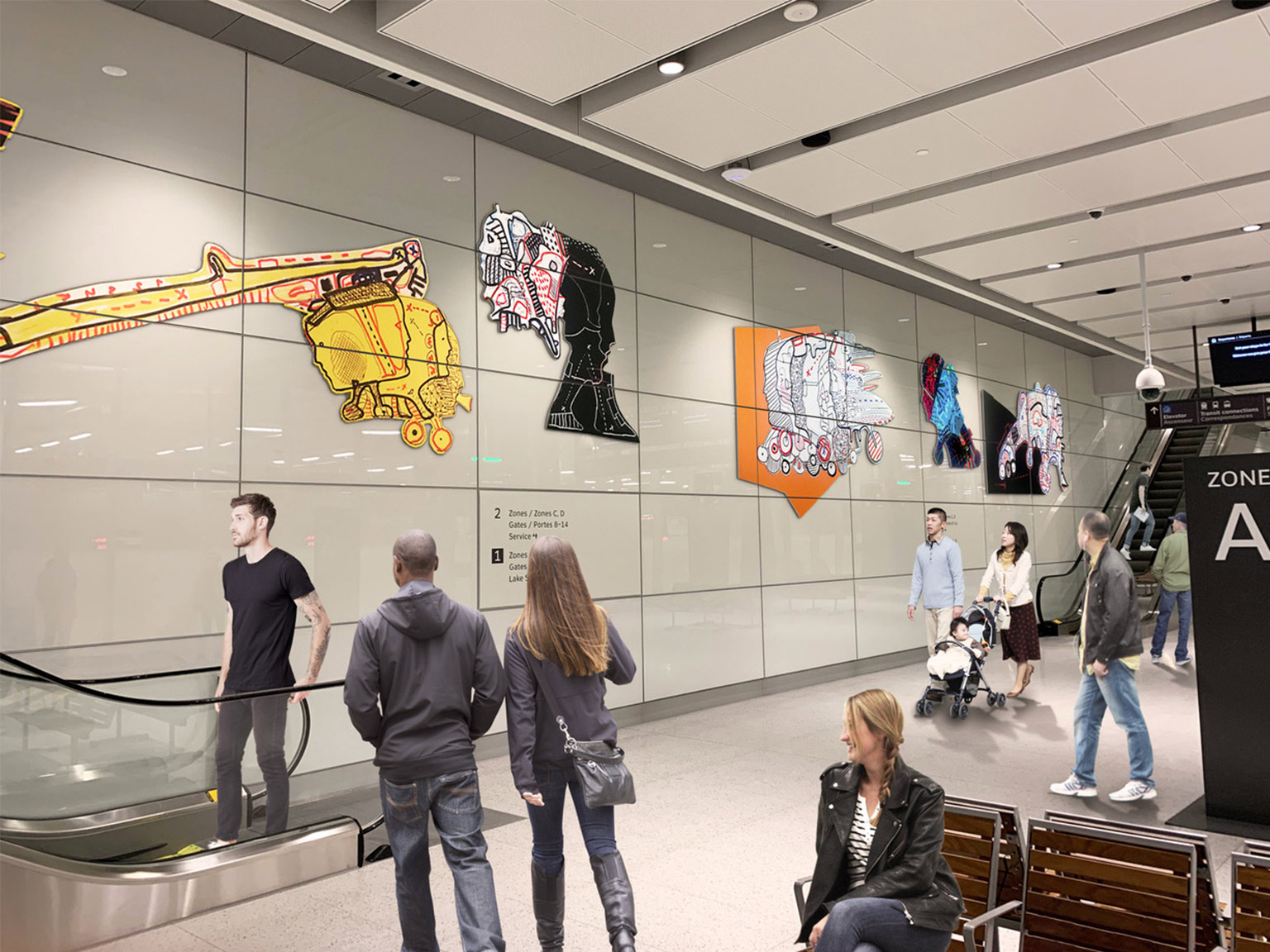 At least when everything is running on time, a transit ride can be energizing, imbuing travellers with a sense of forward momentum that sets them up for a productive day. As people head off to their destinations, they add to the collective urban pulse. 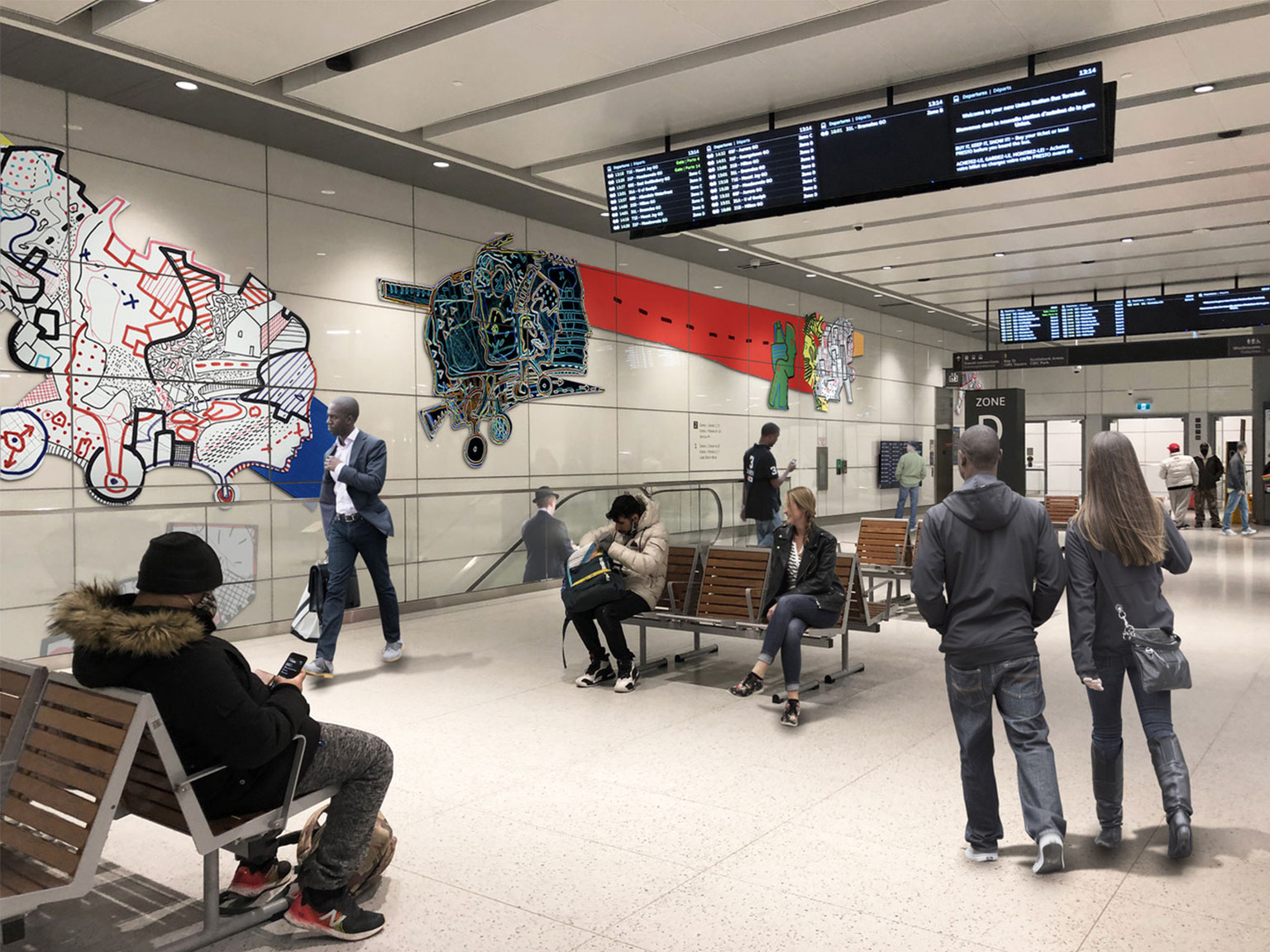 Inside Toronto’s new Union Station Bus Terminal, artists Anna Passakas and Radoslaw Kudlinski (who work together as Blue Republic) build upon this natural sense of momentum with “On the Road,” which depicts abstract representations of a metropolis in motion on wall-mounted aluminum sheets. Roadmaps, construction cranes, and buildings are all represented, making for a colourful and dynamic collage of common urban symbols. Best of all, since the illustrations are so rich in detail, they reveal something new with each repeat visit. In a bustling city, even familiar routines produce constant surprises. 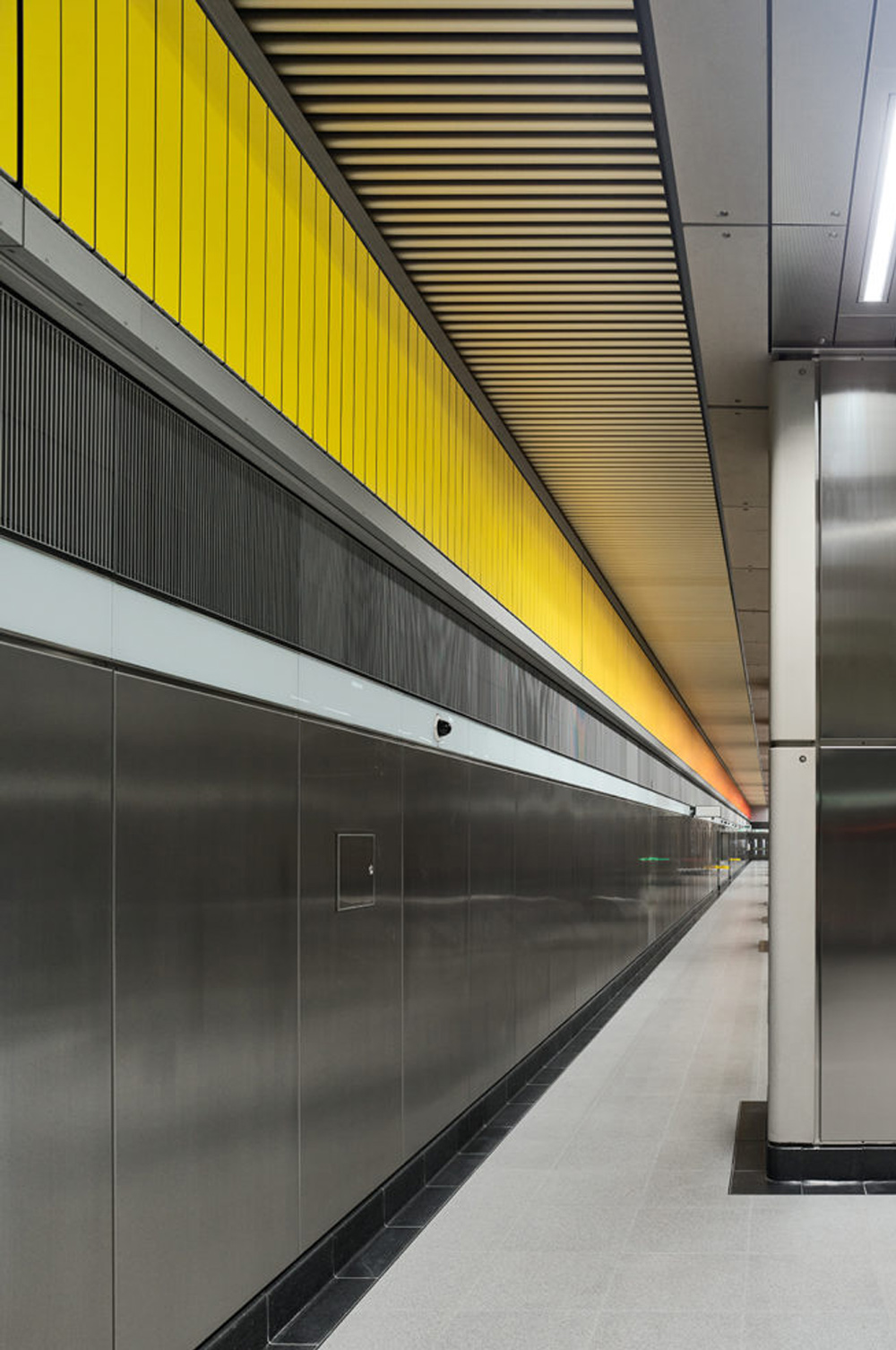 In their 1967 hit “Waterloo Sunset,” British rock band The Kinks contrast the frantic pace of London’s public transit system (“Millions of people / Swarming like flies ’round / Waterloo underground”) with the vivid pink sky waiting to be admired above (“As long as I gaze on / Waterloo sunset / I am in paradise”). A 30 minute train ride away over at London’s recently opened Battersea Park Station, artist Alexandre Da Cunha has brought the two experiences together, introducing a spectacular technicolour sunset into a subterranean concrete setting. 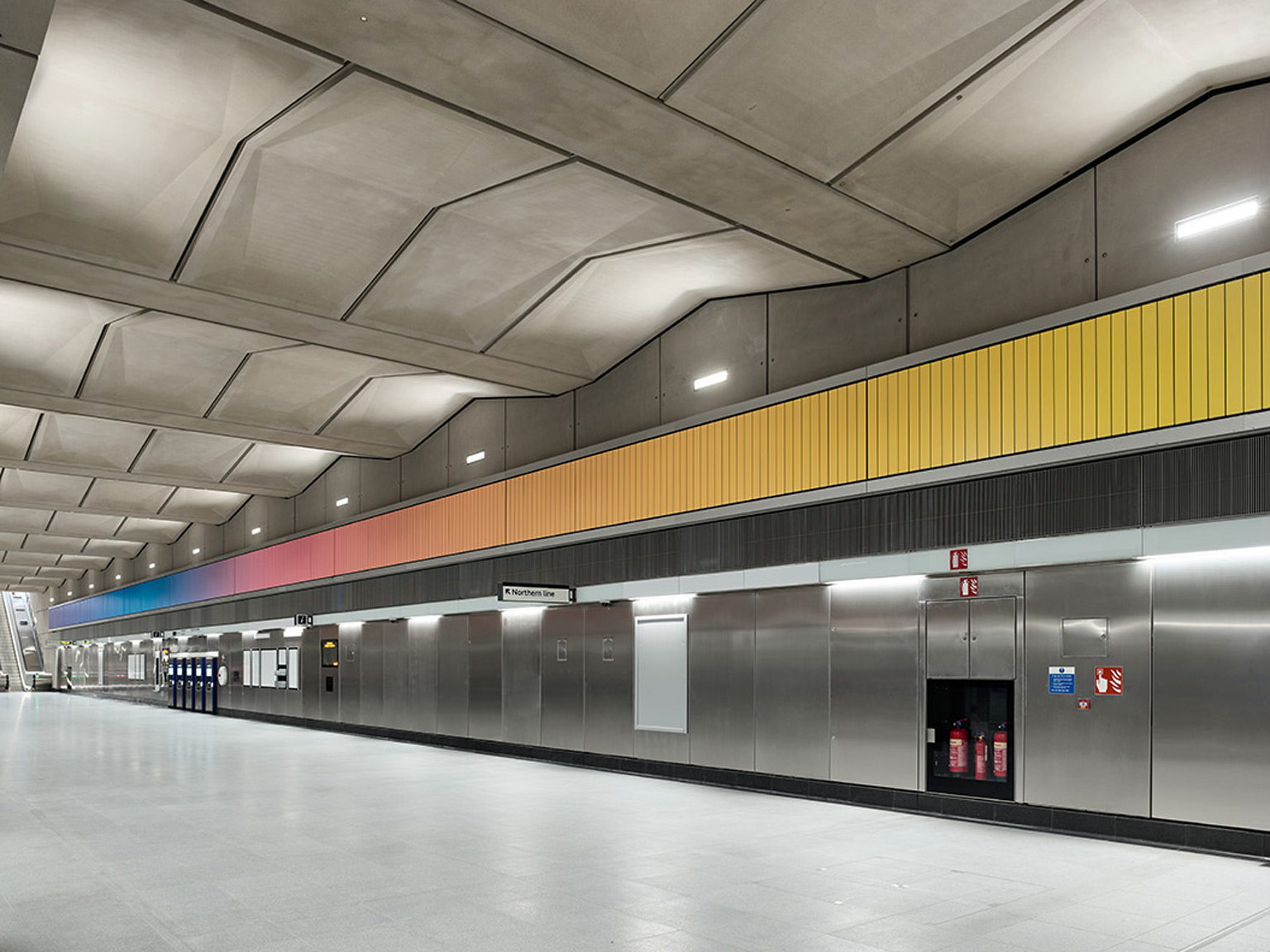 “Sunrise, Sunset, Sunrise” works like a rotating billboard, combining 3,500 vinyl-wrapped aluminum prisms to create two colourful friezes that collectively span over 150 metres in length. As the day goes by, the three-sided panels twist, shifting from blue to pink to orange to yellow — with each shade sourced directly from photographs of real London sunsets.

While the kinetic sculpture evokes the natural beauty of the sky, it also nods to the vertical bars that once regulated electricity output in the old Battersea Power Station control room. Meanwhile, the artwork’s steady motion mirrors the movement of trains and people passing through the tube station. Perhaps a few transit goers will even be listening to The Kinks on their earbuds as they gaze up at the piece’s psychedelic hues.

One way to get the WFH crowd excited about trekking back downtown during morning rush hour? Fill their journey with great public art.