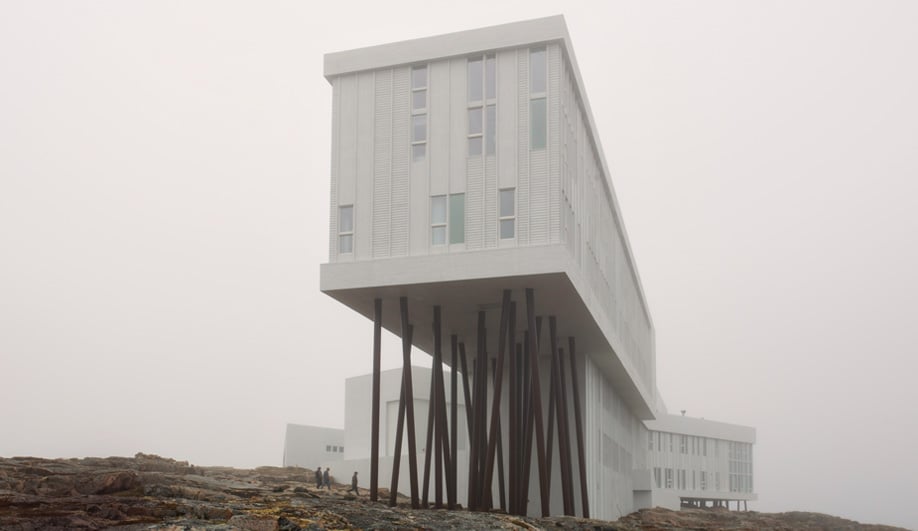 Responding to the local vernacular of building on stilts, Fogo Island Inn’s volumes are supported by steel columns drilled into the bedrock. 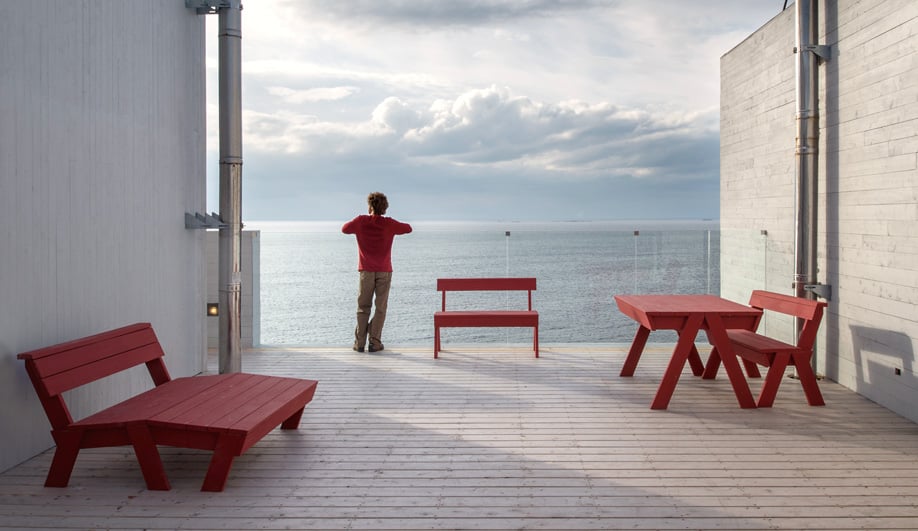 Views of the land and the ocean are highlighted throughout, so guests continually confront the beautiful though inhospitable terrain. 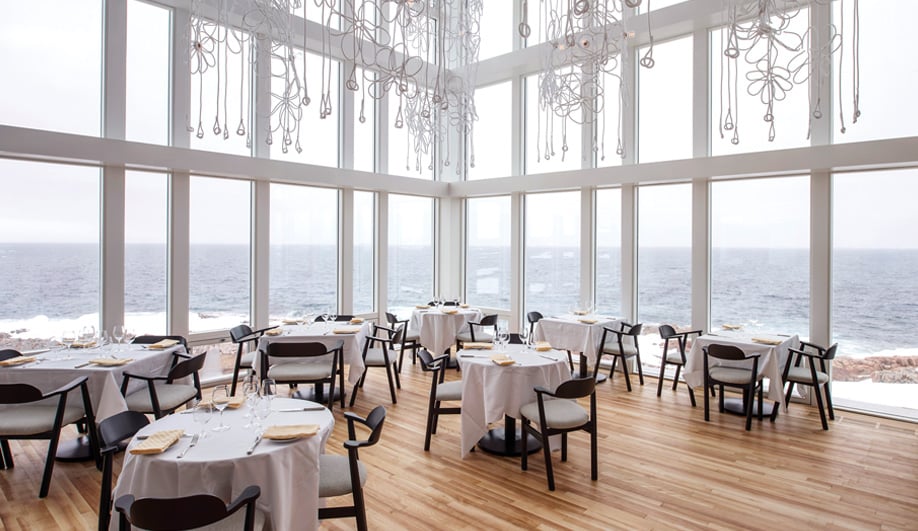 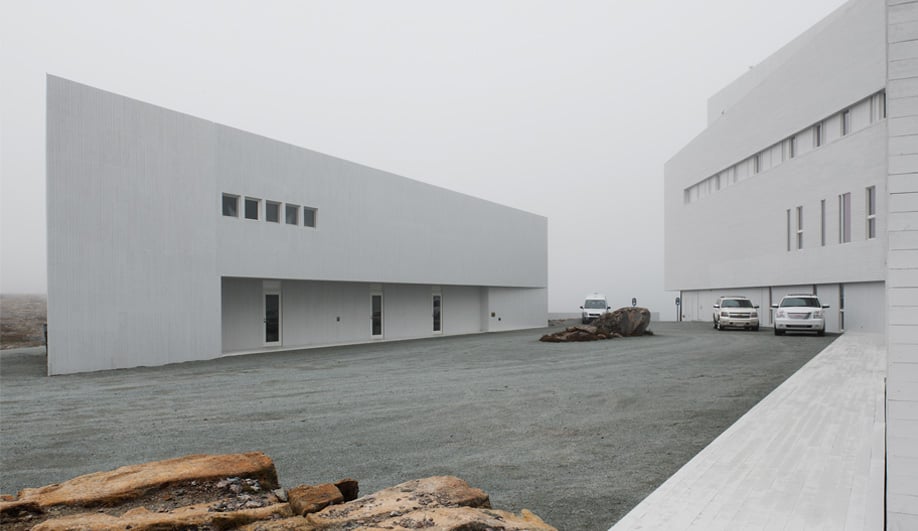 As with traditional Newfoundland houses, the hotel’s main entrance is at the back. 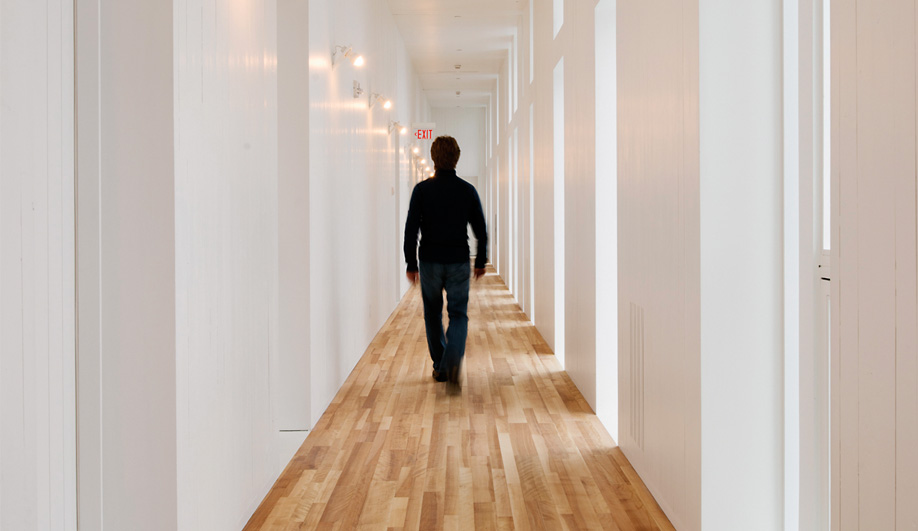 The 29 guest rooms, which occupy each of the four floors, are arranged along a single-load corridor with windows facing north to the ocean. 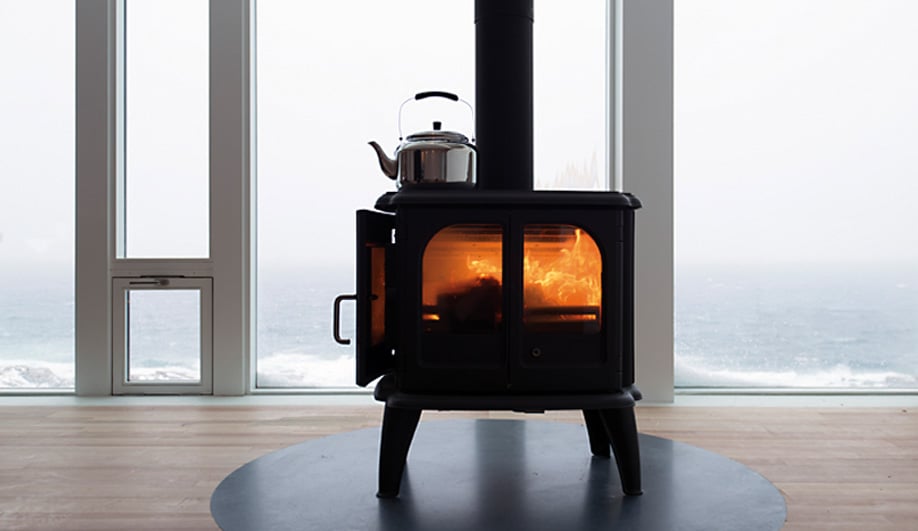 Most of the rooms are heated by a cast iron wood-burning stove. 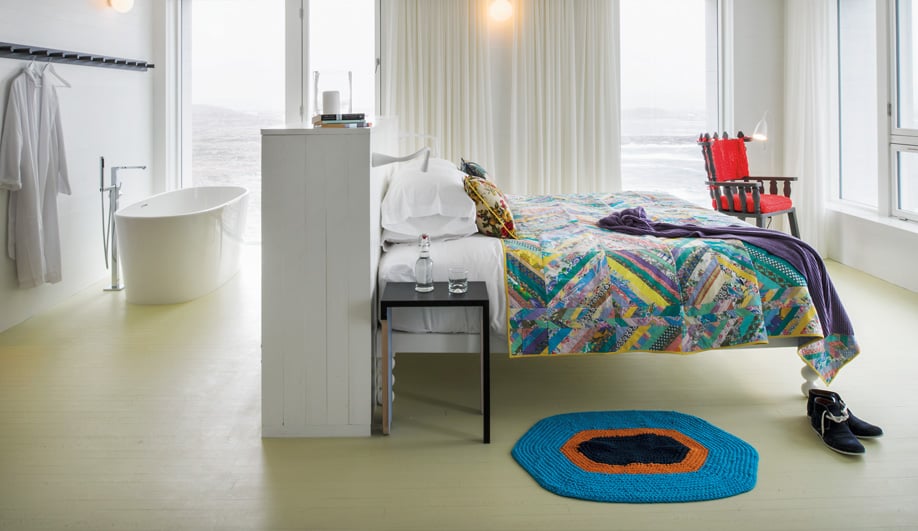 All of the interior accents, including the hand-stitched quilts, hooked rugs and furniture, were crafted by local artisans. 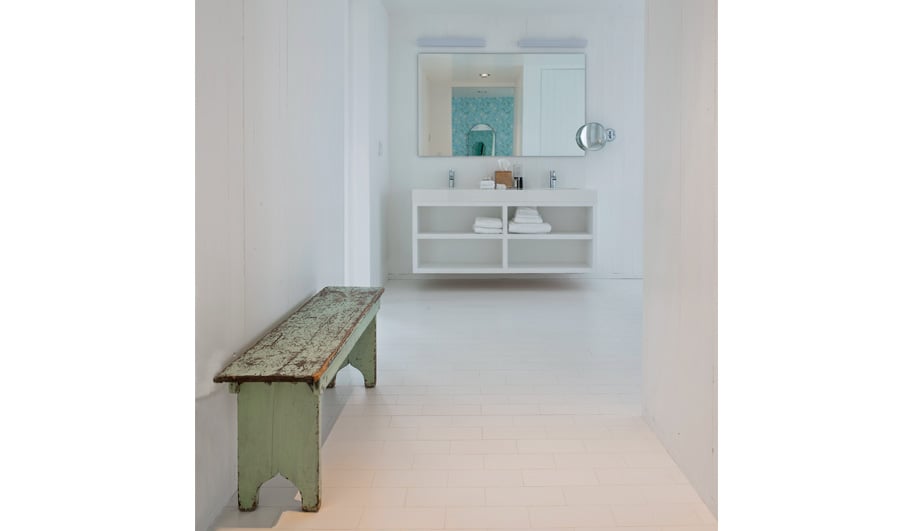 The cantilevered wings that make up Fogo Island Inn, a cruciform structure clad in indigenous spruce, are set at peculiar angles, appearing to be held up by slightly off-kilter stilts. This careful detail embodies a particular brand of Newfoundland humour – equal parts sly wit and bravado, born of ingenuity and necessity. The angles suggest that the 29-room hotel is so cleverly designed, you could remove all of the supports and it would remain standing, despite the snow, sea spray and occasional gales from the wild North Atlantic pounding at its doorstep.

The stilts also recall the quaint decay of vernacular architecture, the fishing flakes and stages that have fallen out of use with the demise of the cod fishery. In this reference lies the seed of the hotel itself, which was en­visioned as part of a revitalization scheme for the declining island economy. It is a project of the Shorefast Foundation, a charitable organization whose president, Zita Cobb, grew up on the remote island, a 45-minute ferry ride from the mainland. Her vision includes bringing visitors to Fogo Island to take in its great stretches of barren coastline and its sublime terrain, which are swathed in weather of all sorts. In turn, hotel profits go toward future community development.

The best view of the inn arrives without warning, along the drive from the community of Tilting, near Tina’s Convenience Store in Joe Batt’s Arm. The white cladding shimmers in the sun-crimped, wavering ocean haze, resembling a seagull about to alight. 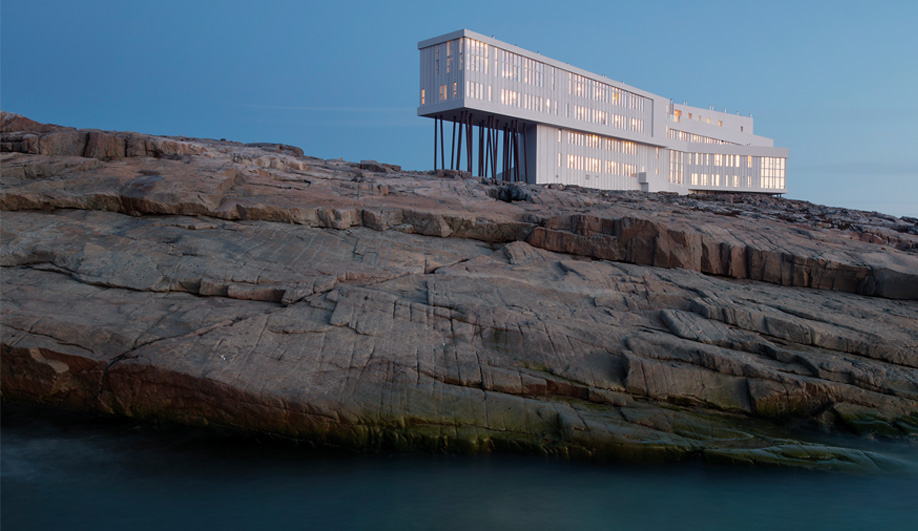 As well as the usual hotel amenities, the four-storey inn has a library, an art gallery, a cinema, and a rooftop sauna.

The building looks so delicately placed on the landscape because it has been. Architect Todd Saunders explains that when he and his client chose the site, they took readings of the terrain every 10 centimetres or so, to avoid disturbing the rock and the vegetation with excessive blasting. Rather, they created a plan that allowed for the irregularities of the rocky surface, and they built a temporary boardwalk to protect the ecology during construction. “In more temperate climates, where the vegetation would grow back in a season or two, those kinds of precautions wouldn’t be necessary,” says Saunders, who grew up in Newfoundland and now lives and works in Norway. “On Fogo Island, regrowth might take years, and we wanted to preserve it.”

According to Saunders, plans for the hotel involved thousands of drawings and many conference calls with the owner from all over the world. The building’s footprint was even rotated a few times, to achieve the perfect orientation for a view of the sunset from every table in the dining room. During my stay in June, I ate juniper-smoked turbot, caught hours before by local fishermen, and a dessert of goat’s cheese ice cream and bakeapples, while a boiling red sun tinted the white dining room in pink and gold hues.

Views of the land and the ocean are highlighted throughout, so guests continually confront the beautiful though inhospitable terrain.

From a distance, the inn almost seems to float above the landscape, yet it is a dramatic structure, as minimalist and modern as a spacecraft. “This isn’t the kind of building we wanted to hide, or sweep under the carpet,” says Saunders. “We wanted it to appear as though it were raising its head, full of pride, to look out at the sea.”

At first Saunders, still in his 30s when he received the commission, felt slightly intimidated by the prospect. He had been designing single-­family homes and had already exhibited a definite flair, but a hotel was on a markedly different scale. “I was fine as soon as I started to think about it as a home. I wanted a structure that I believed my grandmother (if she could pop out of the grave) would find very comfortable.”

As with traditional Newfoundland houses, the hotelu2019s main entrance is at the back.

The entrance is at the back of the building, which is typical of many traditional Newfoundland homes. Two large red wooden doorknobs provide the only accent of colour on the facade, and the only indication of an entrance. “Like big red buttons,” Saunders says. “I wanted the very first thing a visitor touches to be handcrafted.”

All of the interior accents, including the hand-stitched quilts, hooked rugs and furniture, were crafted by local artisans.

The interior was conceived in collaboration with a team of international architects and interior designers who conducted a five-week workshop with local craftspeople. Together, they created all of the interior accents: wallpaper, furniture, light fixtures, quilts, hooked rugs with murals of island life, even the wooden baskets that arrive at guests’ doors in the early morning with fresh pastries and coffee.

The cylindrical hanging light fixtures in the dining room were fashioned from ordinary rope, and they form an elaborate, airy pattern that brings to mind the making of fishing nets or sailing knots. “There was an imperative to avoid anything mass produced,” Cobb explains. “The last thing we wanted was a boutique hotel like every other boutique hotel around the world.”

The amenities include a cinema, a restaurant, a library, an art gallery and a bar, and guests are encouraged to stay for up to three days. An exercise facility, saunas, and hot tubs on the roof overlook the sea, and each room provides an expansive view of the ocean and other islands in the distance. “You know those first three or four seconds when you wake up in a hotel room and you don’t know where you are?” Saunders asks. “We wanted every bed to face the ocean, so that as soon as a guest opens her eyes she knows exactly where she is. She’s in Fogo.” ­