The Top 10 Interiors of 2015
From Kindo in Mexico and Hotel Hotel in Canberra to the Terrazza Triennale in Milan, we select the standout interior design projects that got us talking - and inspired - in 2015. 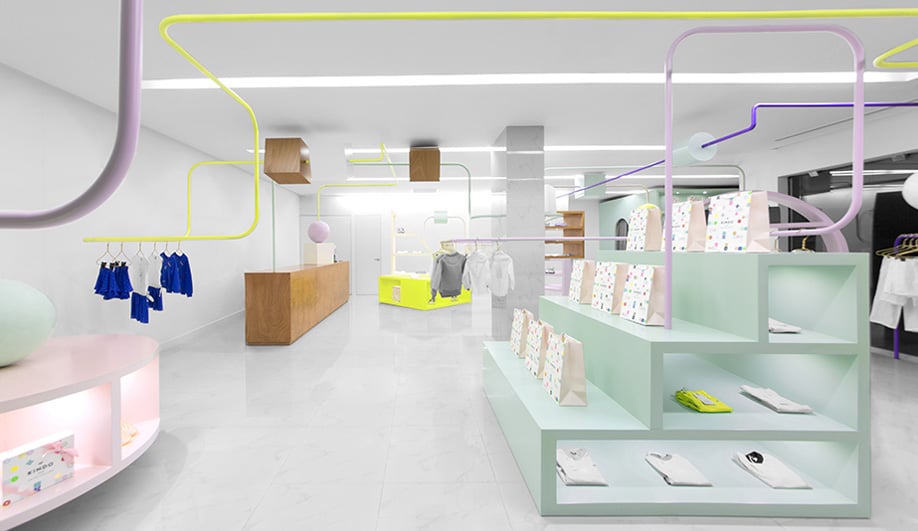 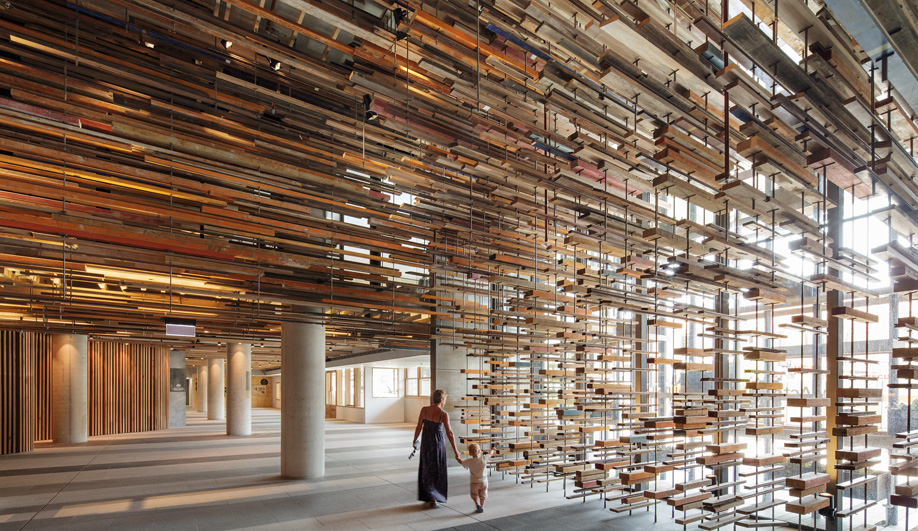 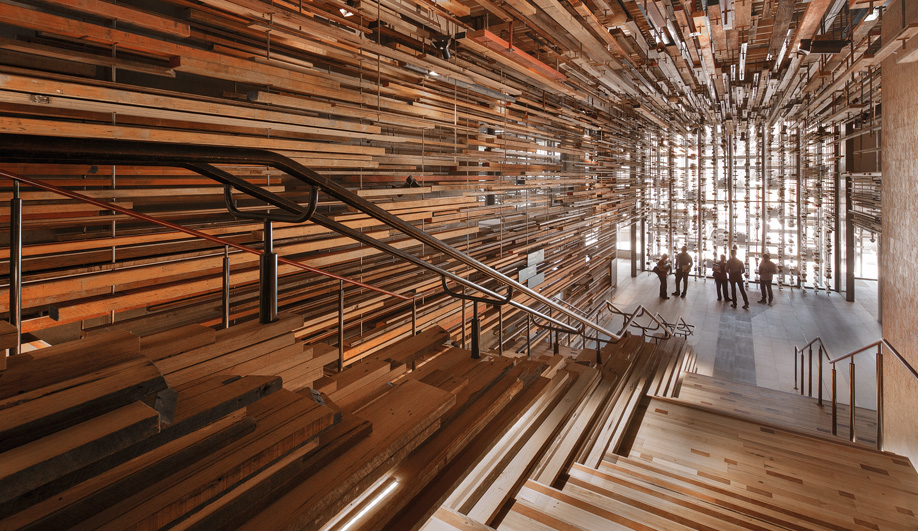 1 Hotel Hotel by March Studio
An unabashed use of raw materials gives this lobby of a hotel in Canberra a supermodern and dynamic look. Reclaimed timber planks suspended from steel paneling scale the walls and ceiling in a horizontal plane, leading the eye back to the inner spaces and letting light filter through to the furthest corners. Concrete columns provide a circular counterpart to the strong linear effect. Winner of the World Interior of the Year 2015, the new hotel is one part of a larger movement aiming to rejuvenate and bring a creative diversity to the New Acton area of the Australian capital. 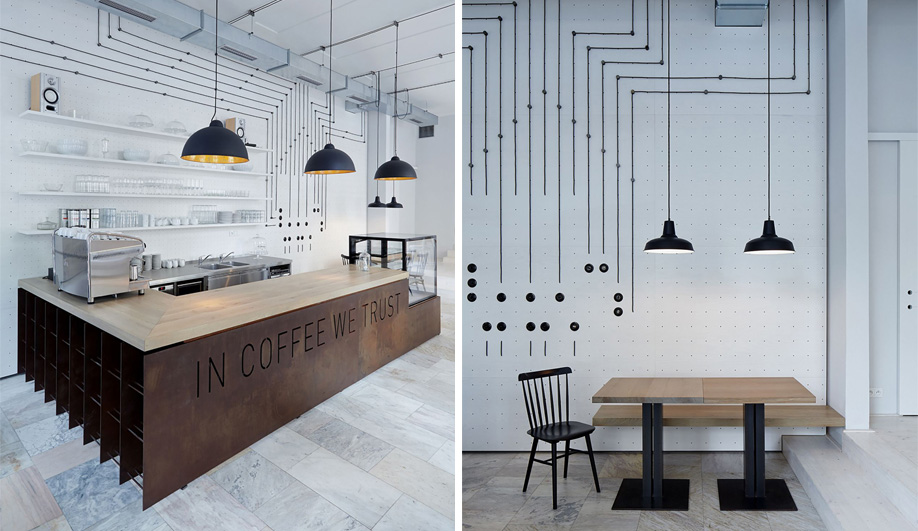 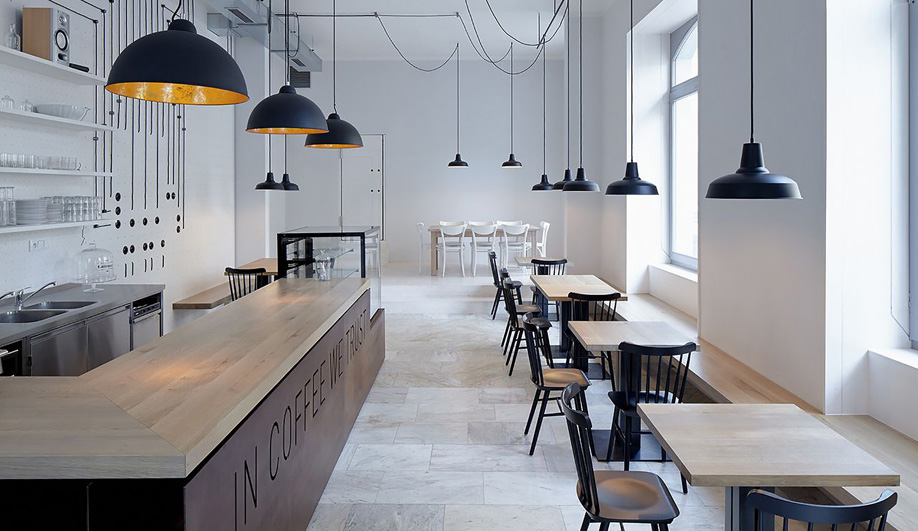 2 Proti Proudu Bistro by Mimosa Architekti
The main wall of this pretty coffee shop in Prague is made of perforated plywood. The simple material allowed for all the components that give the room its utility and aesthetic to be laid out in a grid-like formation. Stark black electrical cords are strung on the wall for a line-drawn effect, stretching gracefully across the ceiling to the suspended pendants over the tables. The individual lights work separately from each other, with their switches mapped out on the wall by their position within the café. Rusted metal wraps around the main counter, which is topped with warm oak, the wood being repeated on the opposite stretch of benching and tabletops. Soft grey and pinky toned stone tiles turn into bleached wood planks in the far back section. 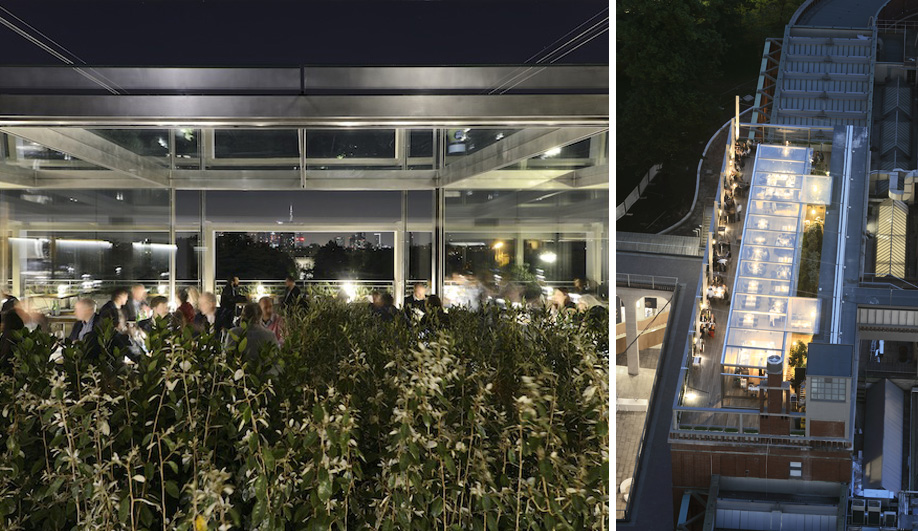 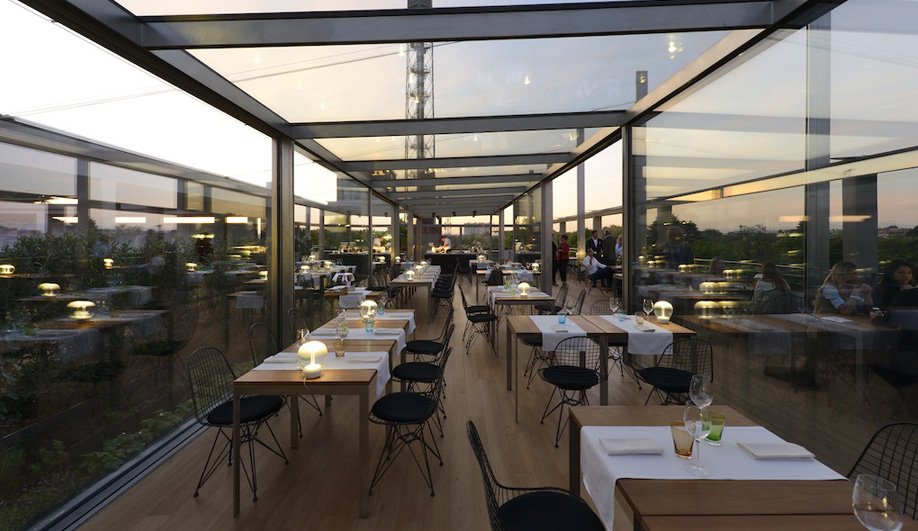 3 Terrazza Triennale by OBR Paolo Brescia and Tommaso Principi
Perched on the rooftop of the Triennale di Milano, this all-glass pavilion spans 150 square metres and offers spectacular panoramic views of Milan. A steel curtain can be rolled over the glass roof to offer protection from the elements. The pared back design – simple wood and metal tables, wire-back chairs – keeps the look strikingly clean. The glazed panels are supported by a lightweight stainless steel framework and lower track system, with some able to “hide” behind others when opened for al fresco meals. A lush herb garden surrounds the glass enclosure, adding both to the visual and olfactory experiences. 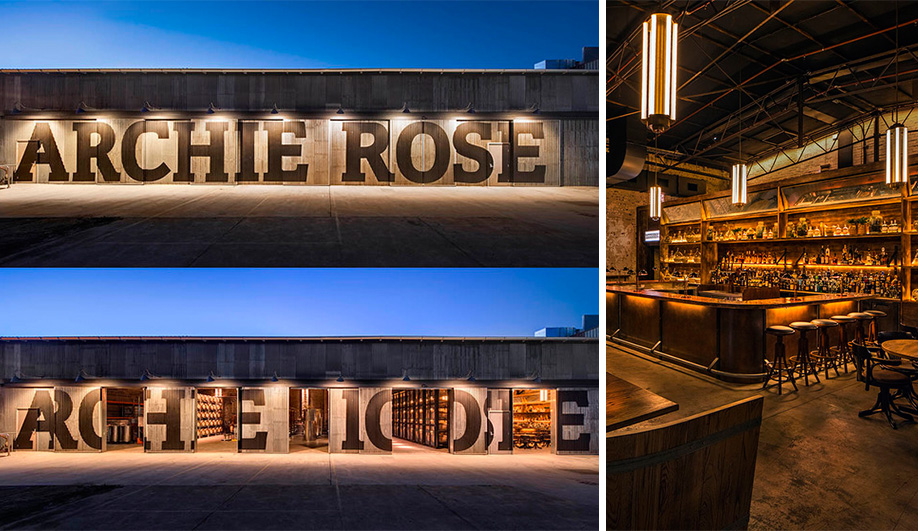 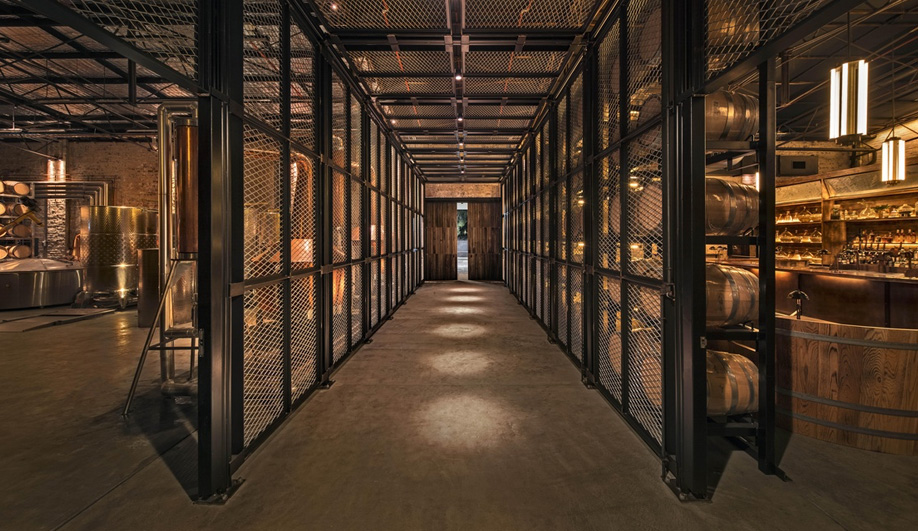 4 Archie Rose Distilling Co by Acme & Co
For the first distillery introduced in Sydney since 1853, the firm renovated a standard steel shed into a moodily light and richly appointed restaurant and bar. Rather than hiding the distillery portion, the same mix of materials used in the restaurant side of the operation — copper, oak, concrete and steel — was used to visually link the two spaces, creating a cohesive interior. A steel mesh hallway leads guests past the copper barrels to the clubby eatery in the back, where custom lighting and upholstered leather seating creates a cozy, relaxed environment. 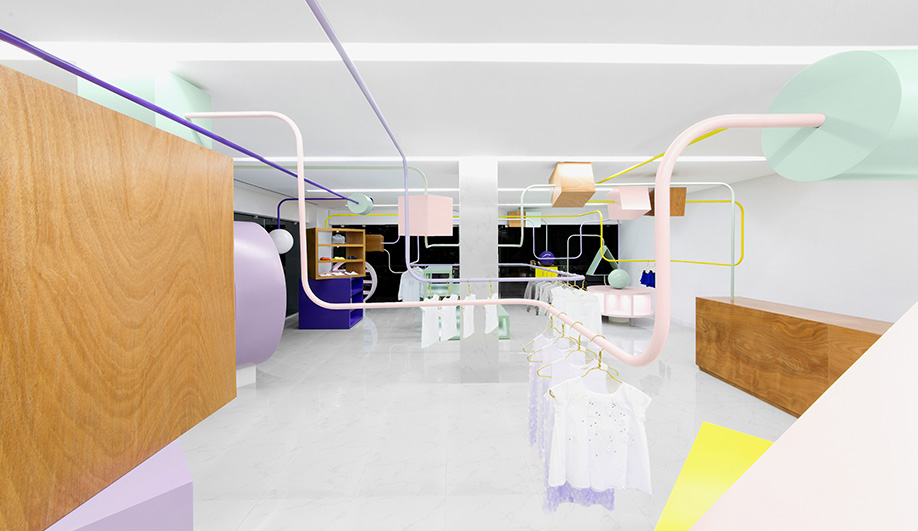 5 Kindo by Anagrama
Colourful bead mazes are a staple of dentist office waiting rooms worldwide. For Monterrey, Mexico, firm Anagrama, they served as inspiration for the interior of a children’s clothing boutique in San Pedro Garza Garcia, Mexico. For Kindo, the wires are writ large as painted pipes that – besides creating a playful environment – partition space and serve as the racks on which clothes are displayed. Installed in an all-white space with strips of recessed lighting, the tubes and oversized decorative “beads” come to the fore, unifying the fun-infused space. 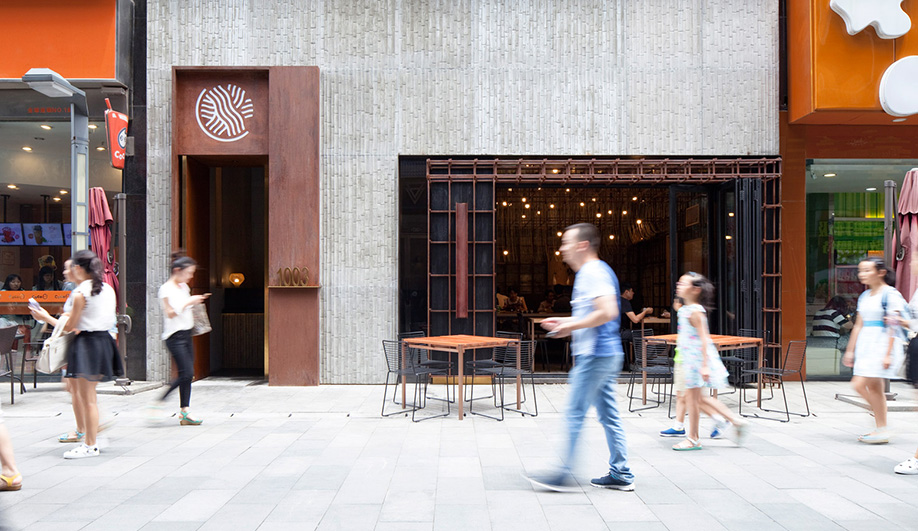 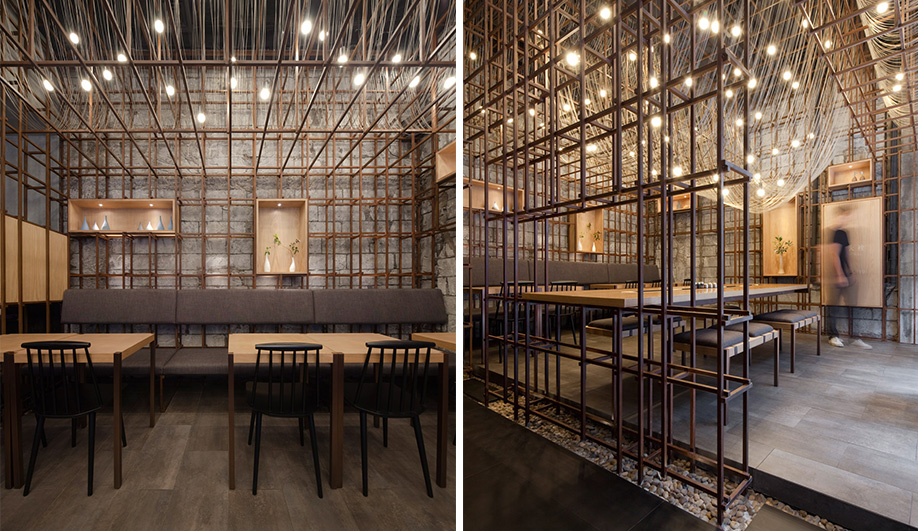 6 The Noodle Rack by Lukstudio
Even if the Noodle Rack’s source of inspiration weren’t right there in the name, there’d be no mistaking it. Shanghai’s Lukstudio maximized the unusually high ceilings of the restaurant in a shopping promenade in Changsha, China, by filling the void with a scaffold of rusted rebar. Rows of slim metal wires play with the light from exposed-bulb pendants, mimicking the look of hand-thrown noodles drying on – you guessed it – a noodle rack. Along with the original stone block walls, the ceiling installation establishes an unmistakeably industrial atmosphere. Other gestures are more gentle: minimalist shelves and tables are crafted in warm wood; and concrete accents, including the bar front and exterior facade, were made with bamboo forms that left behind grooved impressions. 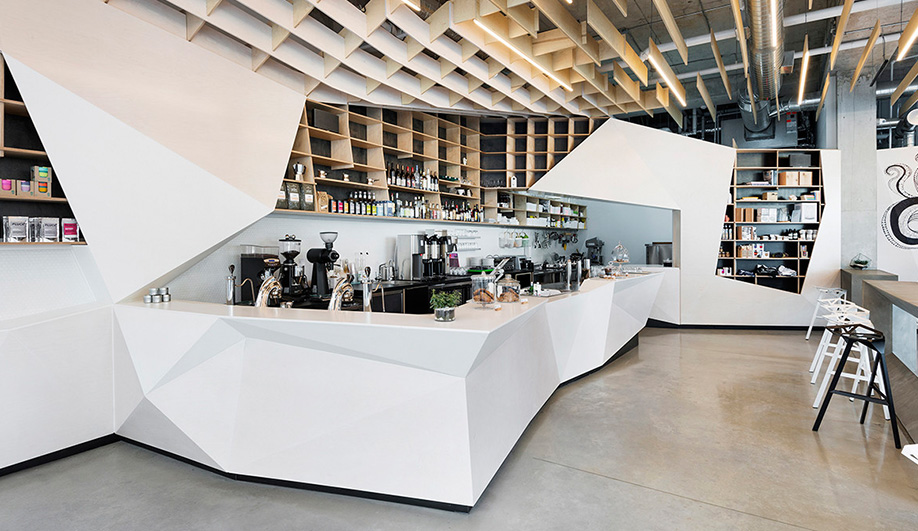 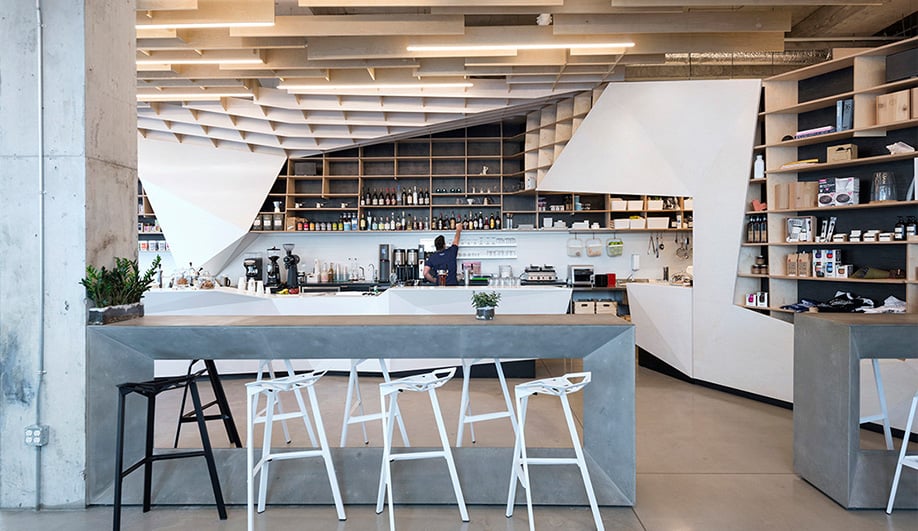 7 Odin Bar and Cafe by Phaedrus Studio
The Canary District, one of Toronto’s largest urban redevelopment projects in decades, is still getting ready for its first tenants – mostly urban young professionals – but the vendors have begun to arrive. Odin is an energetic bar and cafe that utilizes newly poured concrete flooring, glass curtain walls and double-height ceilings to dramatic effect. David Grant-Rubash of Toronto’s Phaedrus Studio has warmed up the cavernous 150-square-metre space by adding a natural wood skeletal construction that covers most of the ceiling and parts of the wall where it turns functional as storage space for the bar.

A row of bar stools by Konstantin Grcic sit next to concrete bars and match up with white, asymmetrical Corian countertops, echoing the sculpted effects of ice floes and frozen geometric masses at every turn. At the back, low table seating invites laptop customers to stay for the afternoon, while the higher-traffic espresso station and takeout services are closer to the entrance. 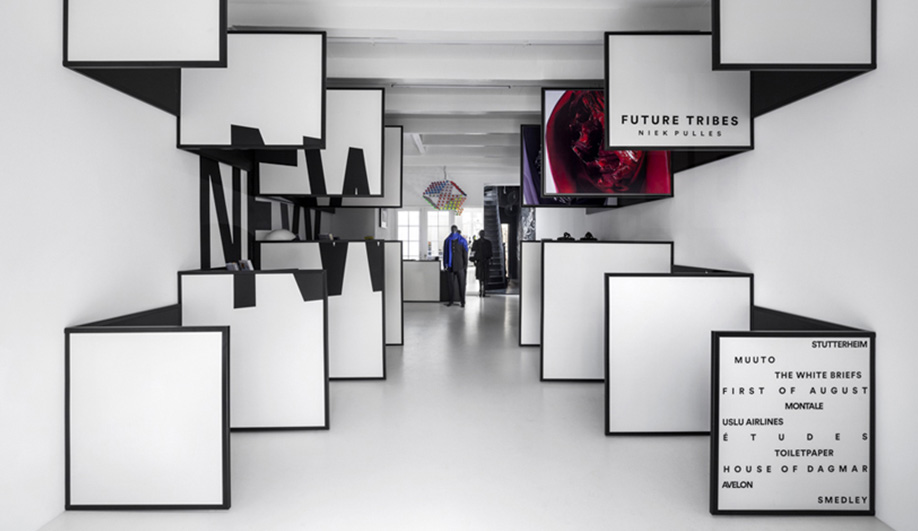 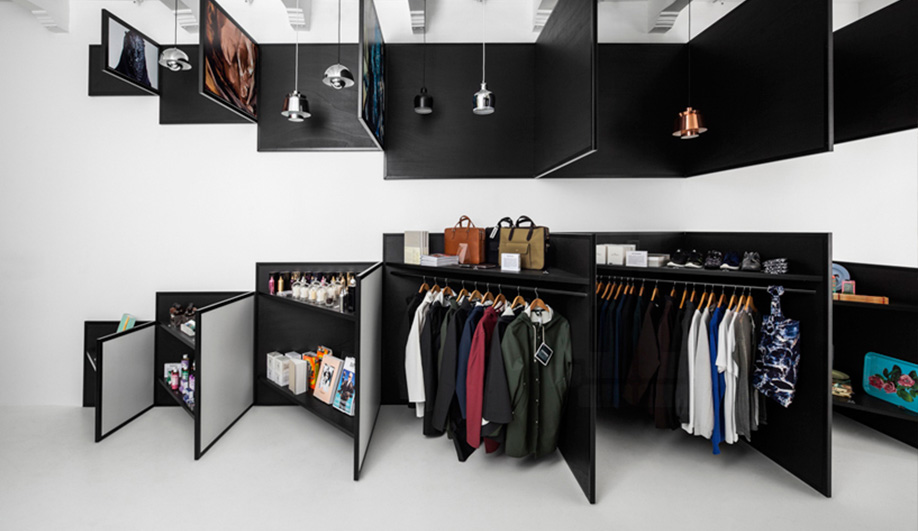 8 Frame Store Amsterdam by i29
Dutch firm i29 might be familiar to readers of Azure – we’ve been covering its projects for years, and in 2014 the studio won an AZ Award for a remarkable residential interior unabashedly covered in naked sheets of plywood. For design magazine Frame, i29 was invited to create a temporary retail environment and it ingeniously combined various concepts into one experiential interior. The retail shop is like a 3D version of the magazine, where customers walk past hanging panels that read as blank white pages with a signature black frame, a nod to the publication’s iconic black/white graphics. As you walk through the shop, it’s an all-white canvas; as you head back out, it’s an all-black atmosphere. The stock, a well-curated collection of fashion pieces and home accessories, are contained with black-painted shelving units where the merch is hidden until visitors are fully immersed in the installation/shop experience. 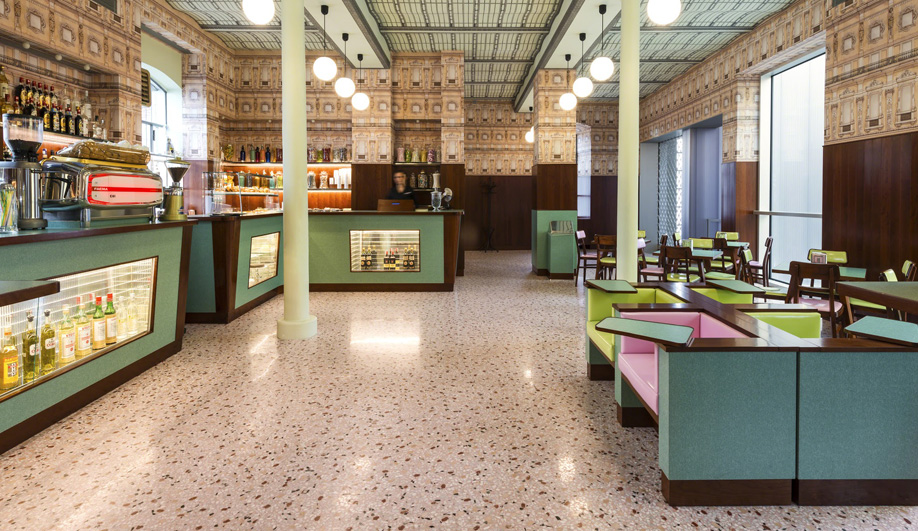 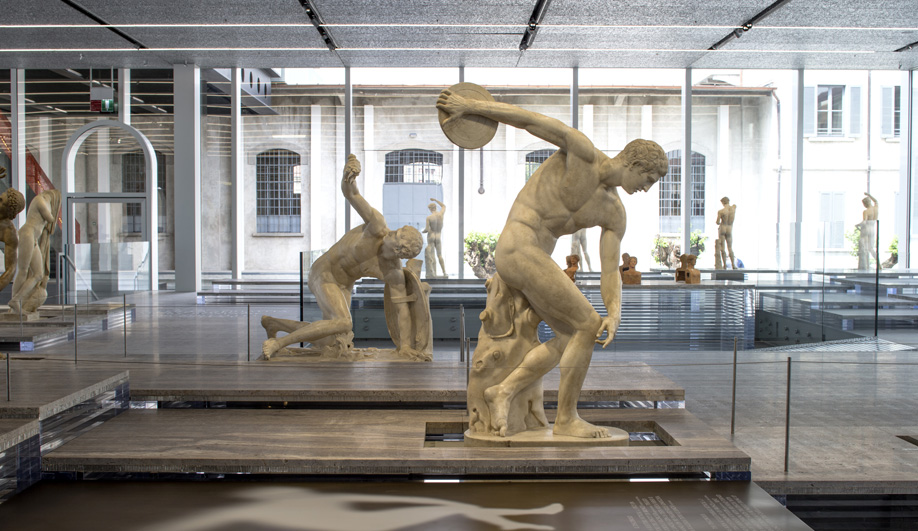 9 Fondazione Prada by OMA and Wes Anderson
There is no one room that epitomizes the multi-building venue that now houses Fondazione Prada, an almost-the-size-a-city complex that opened earlier this year in Milan, and that was architecturally renovated by Rem Koolhaas of OMA. Housed within a century-old distillery, the foundation is the ultimate environment for showcasing contemporary art, film, novelty cars, Greek statues, and, of course, high fashion. It does so in a way that seamlessly blends these enterprises into a universal creative genius unhindered – and uninhibited – by reputation, labels or chronology.

In other words, you would never know this gallery of visual richness is being run by a fashion label; the nods to haute couture are far and few between. Among the most outstanding parts of the complex is one building clad, like a Willy Wonka chocolate bar, in 24-karat gold leaf, and a canteen defined by a row of pinball machines and over-the-top whimsical patterning throughout. Called Bar Luce, it is designed by film director Wes Anderson. 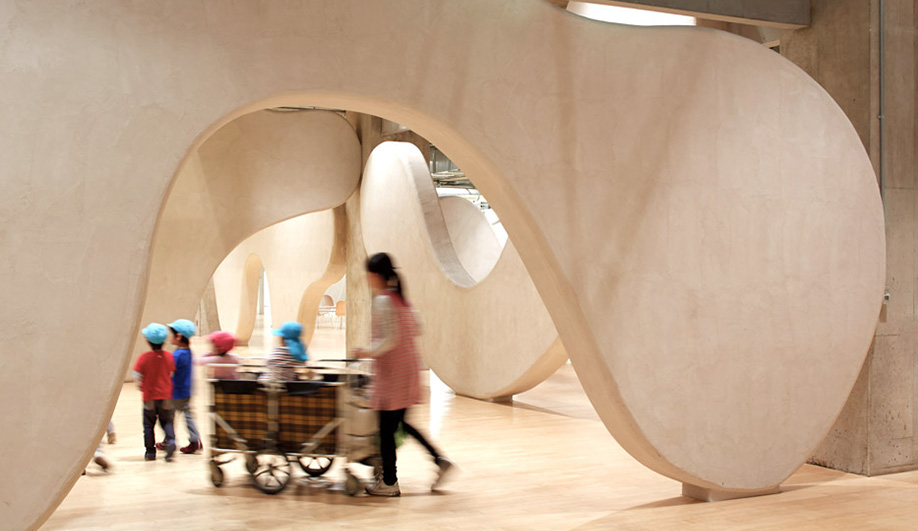 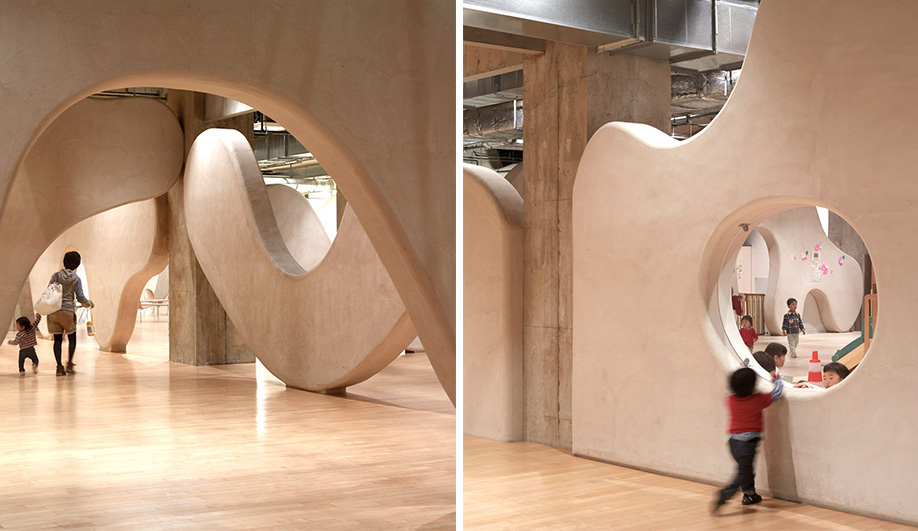 10 Cloud Garden by Junya Ishigami
In a high-rise in Atsugi, Japan, architect Junya Ishigami carved out the ultimate whimsical space for children. Transforming a 2,200-square-metre former cafeteria into the Cloud Garden daycare and child support centre, he inserted massive cloud-like partitions throughout the space. Their flat volumes (some of which conceal electrical) are slotted between the existing columns, and by their very shapes and the way they interface with each other, they create fun passageways, nooks and circle cutouts. Finished in cement mortar, the screens feel warm and embracive – somewhat a departure from Ishigami’s barely-there minimalism.