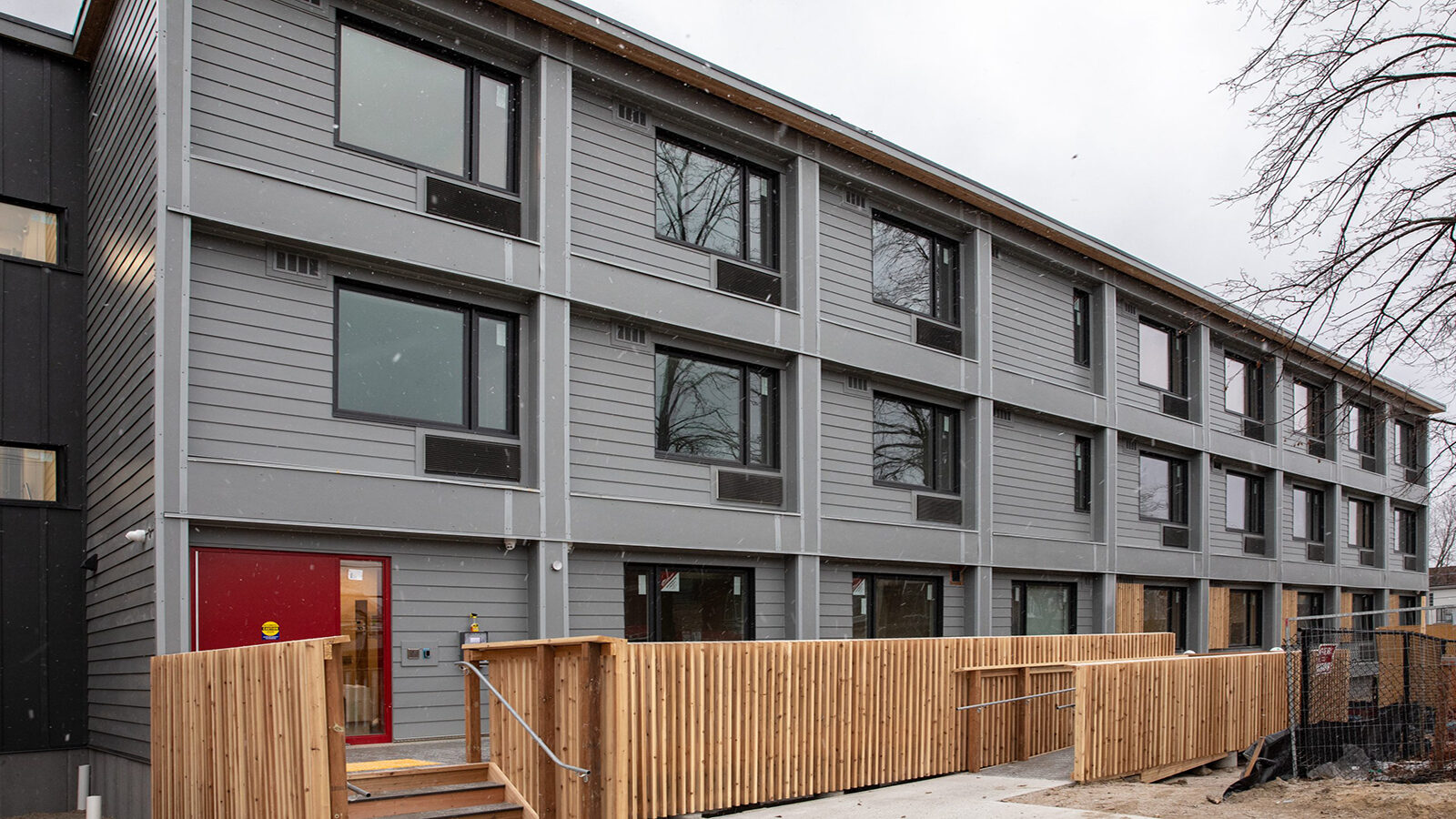 Last Spring, the City of Toronto announced a plan to build over 200 new affordable supportive housing apartments in just a matter of months. “We know helping people with supportive housing is good for everyone and modular housing is a way to make that happen faster,” Mayor John Tory said in an April 29 announcement. “The pandemic has heightened the need for supportive housing.” And just before the end of the year, the first residents moved into the rapidly constructed Scarborough complex at 11 Macey Avenue.

In the first weeks of 2021, the 56 bachelor suites on Macey Avenue were followed by another modular building, featuring 44 compact apartments, at 321 Dovercourt Road in downtown Toronto; that’s a total of 100 completed homes. And this week, the City announced that similarly scaled buildings in Willowdale and Cedarvale are each expected to introduce an additional 64 new supportive homes before the end of the year. 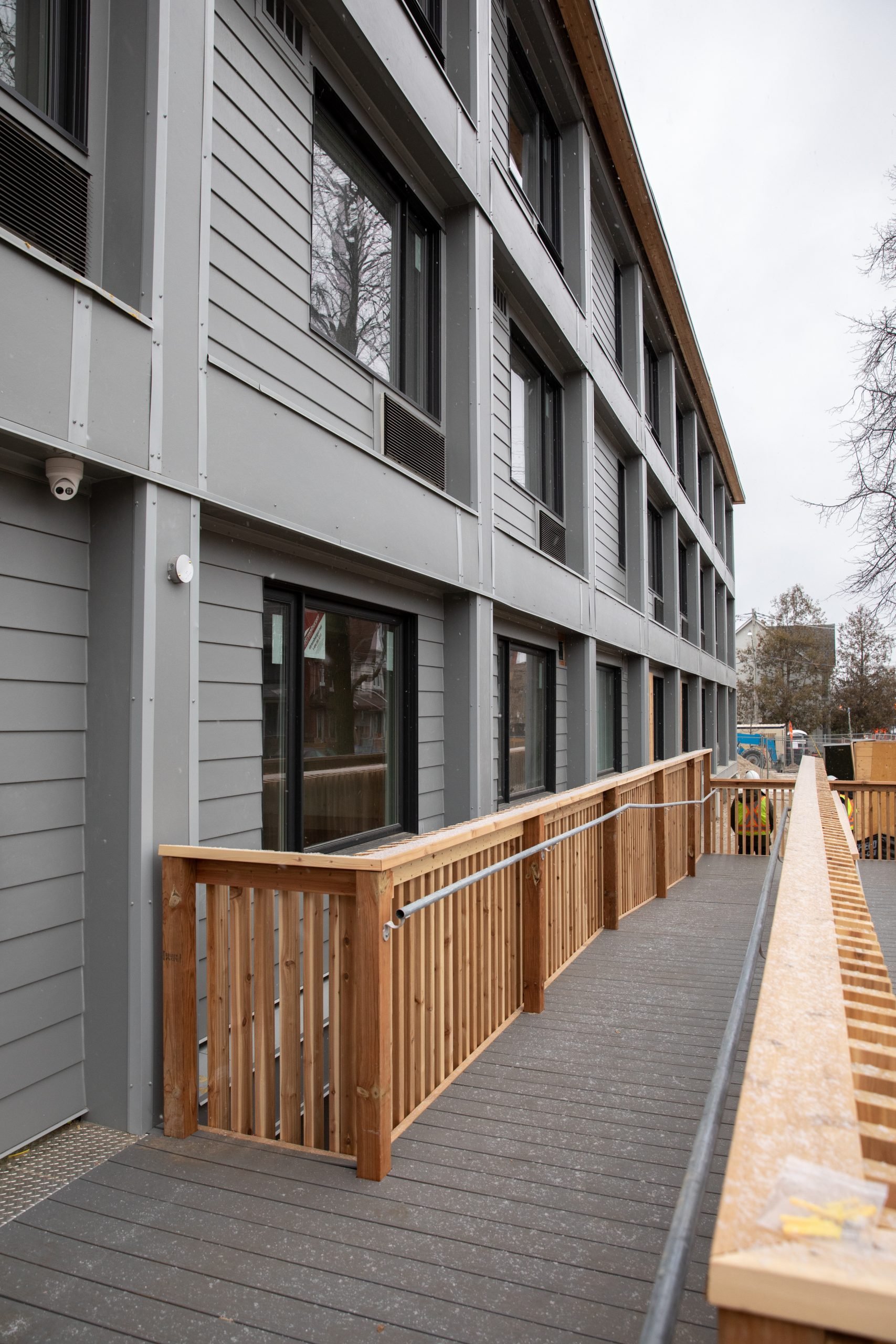 The frontage of 321 Dovercourt. Photo via City of Toronto.

Measuring approximately 28 square metres each, the homes all come fully furnished, and are equipped with a compact modern kitchenette and full, accessible private bathroom. In addition, the four planned and completed buildings — which are all designed with a similar 5,200-square-metre footprint and three-storey scale — include a larger communal kitchen and dining room, as well as administrative offices and program spaces for residents.

The four projects announced so far under Toronto’s Modular Housing Initiative (MHI) leverage modern pre-fabrication techniques to construct functional new homes on a dramatically accelerated timeline. Assembled from a factory-made kit of parts delivered to site and stacked into place, the buildings can be completed in months — even weeks — instead of years. Built on vacant or underused City-owned property in established neighbourhoods, they have the potential to transform parking lots and fenced-off land into full-fledged communities. 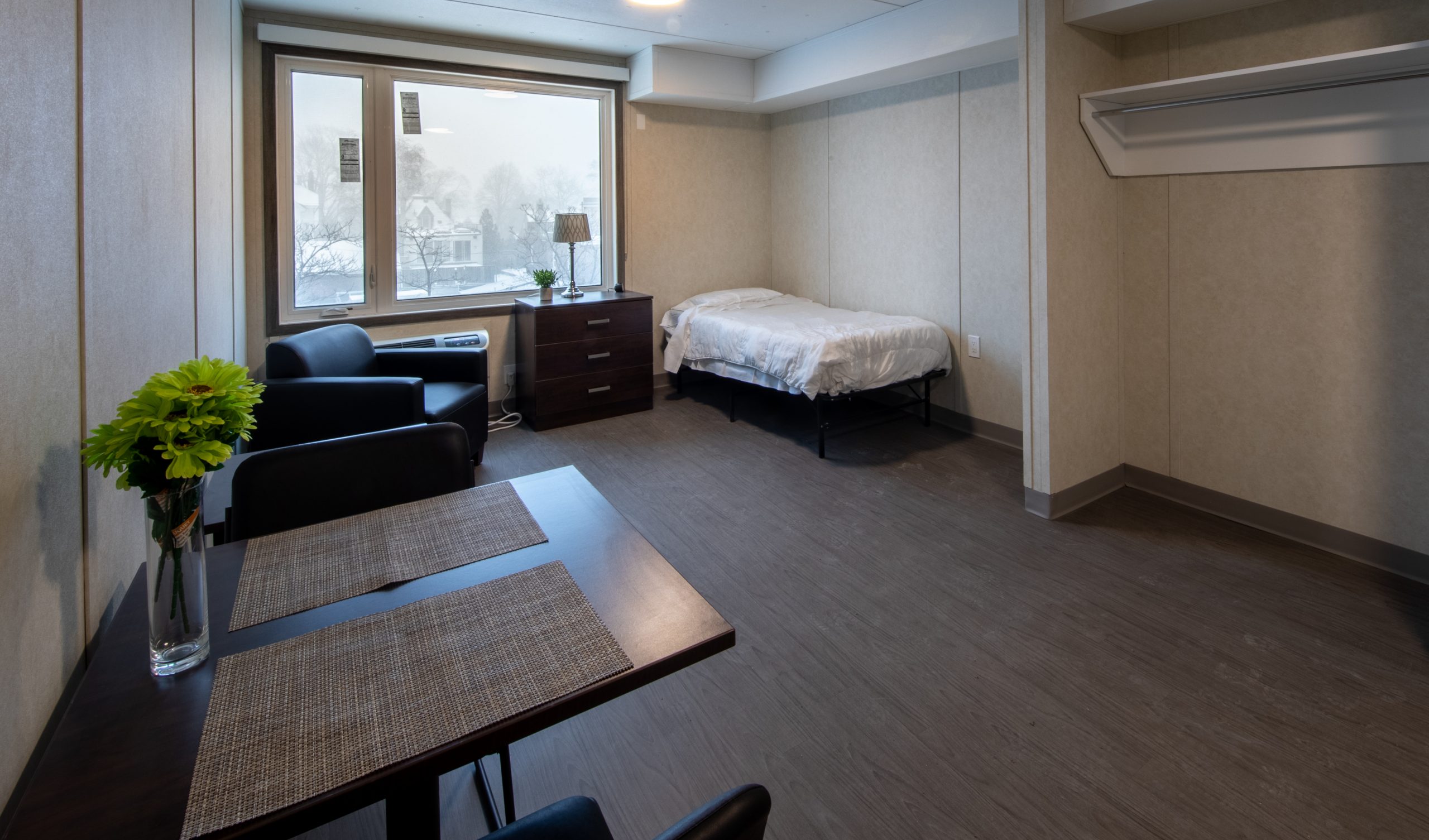 A suite interior at 321 Dovercourt. Photo via City of Toronto.

Celebrated local architects Montgomery Sisam developed the modular design template, which imbues highly streamlined, efficient fabrication with a sense of grace, dignity and comfort. While the apartments all welcome ample natural light through their generous central windows, the buildings themselves quietly convey a sense of welcome. Framed by exterior accents in warm wood tones, the simple buildings are eventually set to be complemented by landscaping and ample outdoor seating, making for a sociable ambiance. 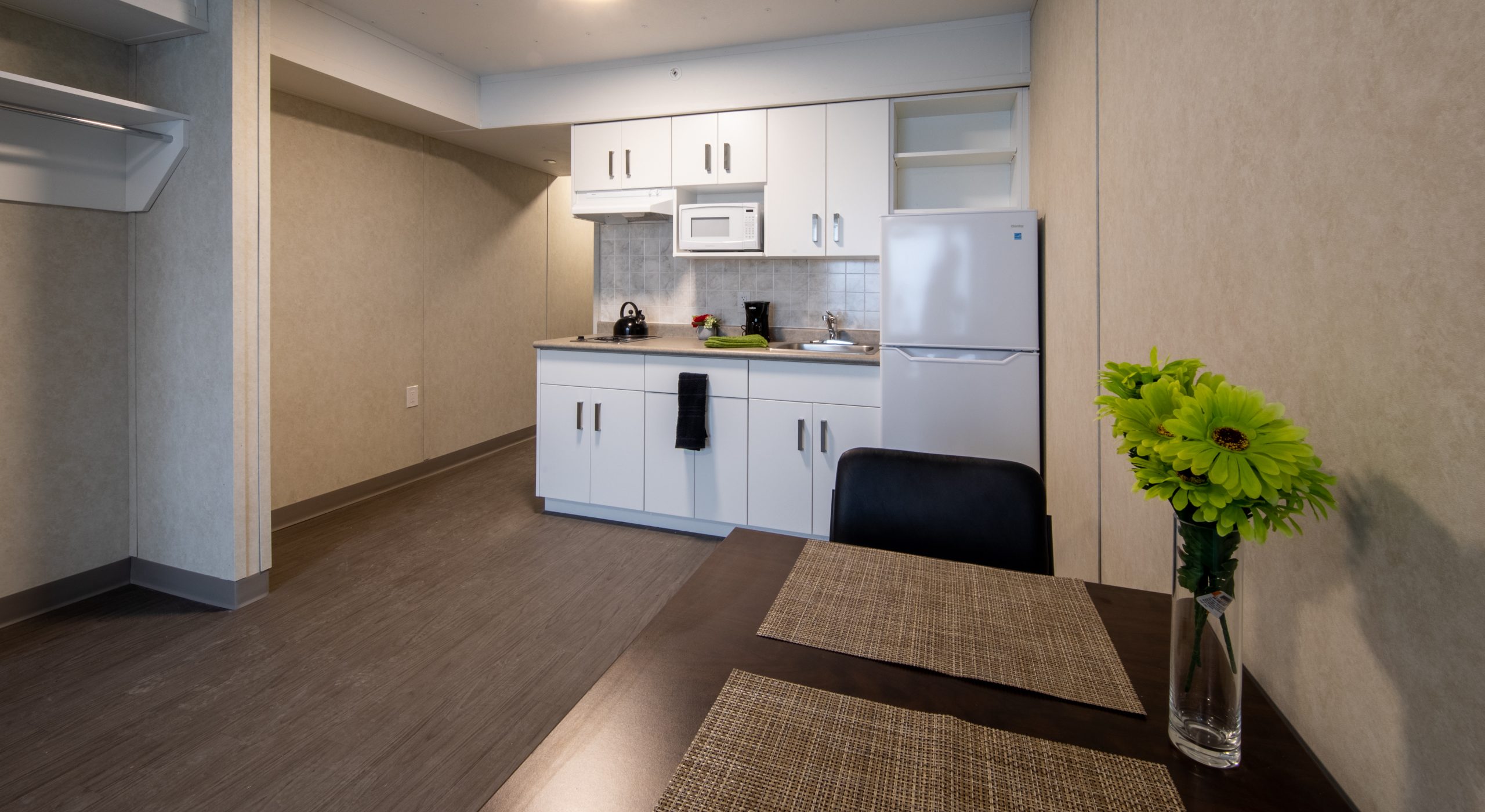 A typical kitchenette and dining space at 321 Dovercourt. Photo via City of Toronto.

According to the designers, the initiative’s “architectural significance is found in a design that not only recasts our experience of modular buildings but of those who will inhabit them here.” And while “modular buildings are often perceived as cold and industrial, foreign to their surroundings,” Montgomery Sisam’s pared down yet thoughtful design feels of a piece with the fabric of Toronto’s residential neighbourhoods. 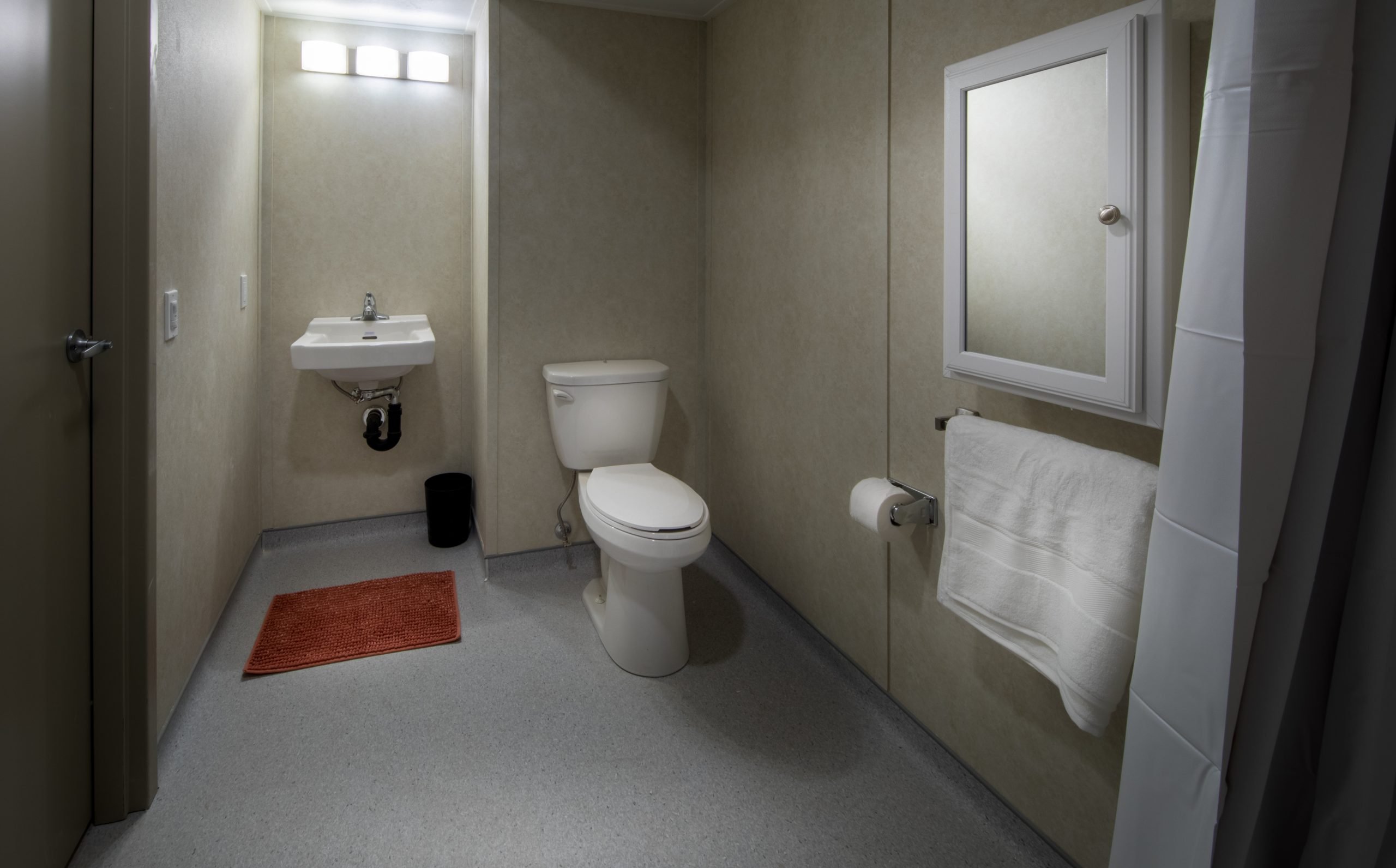 A private bathroom at 11 Macey Street. Photo via City of Toronto.

The logistical advantages of a modular system also translate to a less-carbon intensive build, reducing emissions related to transportation, staging and on-site material waste. Montgomery Sisam outlines further benefits to the pre-fabricated process, including “the high level of quality control that occurs during production in a controlled factory environment, the accelerated construction schedule, improved commissioning and greater cost certainty.” 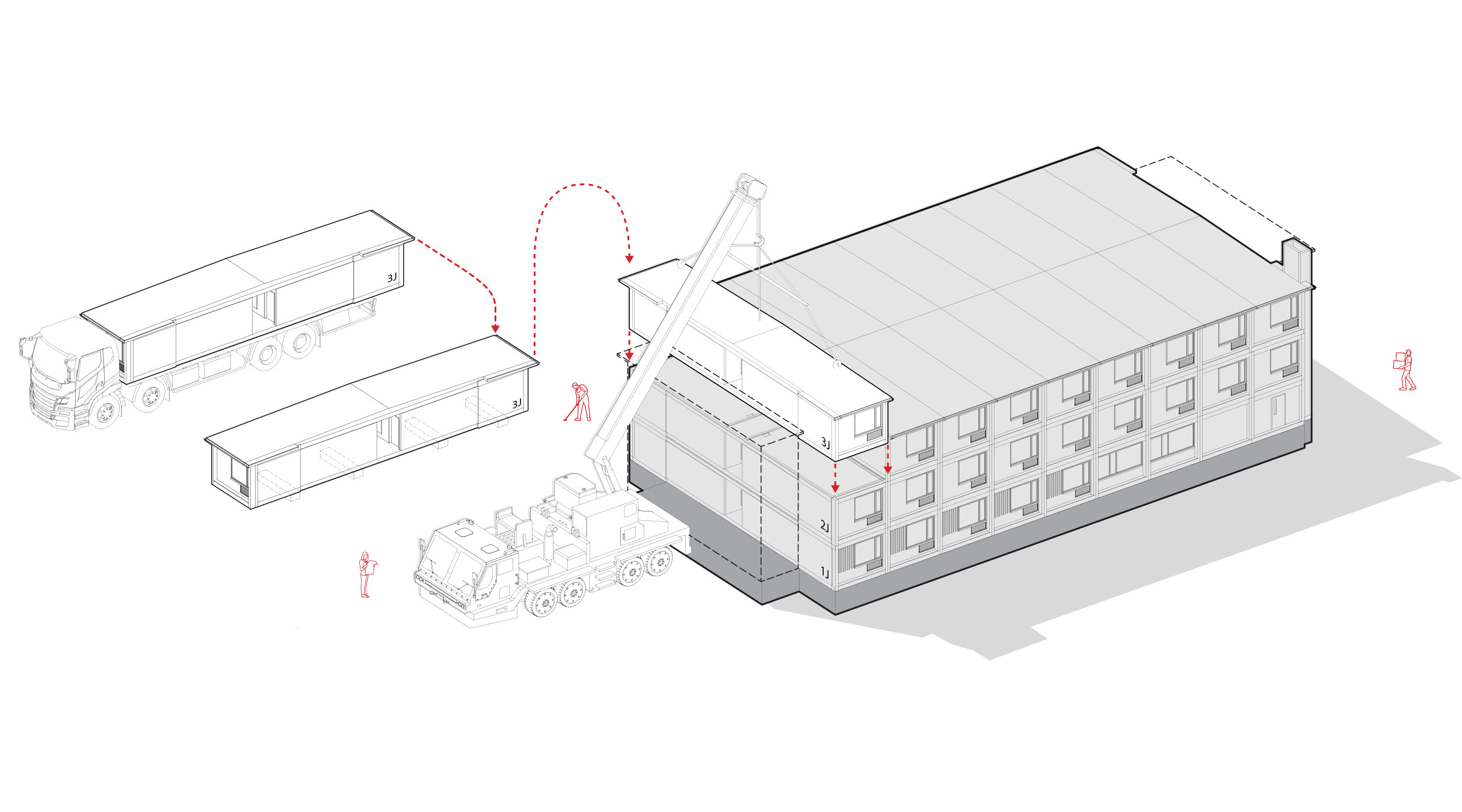 For all the innovation in modular design, MHI’s early success still owes more to political action than pre-fabrication. In speed and scale, the City’s embrace of supportive housing is a modest but meaningful step in fulfilling long-standing promises to address chronic homelessness. The initiative is just one part of a larger municipal strategy to rapidly introduce over 1,200 new supportive housing units in 2021, which will also include converted hotels and improved social housing. In the longer run, Toronto’s HousingTO Action Plan calls for 40,000 new affordable homes by 2030, including housing for modest-income residents and additional supportive homes for vulnerable populations and people experiencing homelessness.

But even the most basic tenets of the plan — including services in the recently completed modular homes — have yet to be adequately funded. While the capital required to construct the homes was secured through a combination of federal and municipal funds, the operational costs required to maintain basic supportive amenities (including healthcare and employment programs) within their communities have yet to be secured from the province of Ontario. What’s more, the lack of municipal or provincial funding for the 1,200 planned supportive housing units could leave the City with little choice but to turn the homes over to the rental market.

The lack of a funding commitment from the province (and the failure of a subsequent proposal from Councillor Mike Layton to provide stopgap municipal funding in the meantime) is especially jarring considering that the long-term costs of supportive housing pale in comparison to the shelter system. The COVID-19 pandemic has inflated the monthly expense for maintaining a single shelter bed to $6,600. By contrast, a supportive housing unit only runs the City some $2,000 per month. Stark as it is, the fiscal disparity says nothing about human welfare. Where shelters — which are critiqued for being unsafe and inhumane — are designed only to provide emergency accommodation, supportive housing is designed to nourish human life. Yet, as reported by the Toronto Star, the City’s current funds are “only enough to put support services in 150 of the projected 1,248 units.”

From concept to creation, Toronto’s embrace of supportive housing during the COVID-19 pandemic represented a promising departure from the inert — and seemingly indifferent — bureaucratic machinery that churned out decades of delays and broken promises in building these much-needed projects. Along with a provincial restriction (albeit a temporary one) on evictions and a municipal commitment to increase shelter capacity and improve conditions, modular homes are progress. But a lack of funding means much of the modest progress made is already at risk, while the City’s hostility to encampments and shelters in public space belies a true commitment to housing justice.

When it comes to encampments & their residents, @cityoftoronto & its politicians say one thing, but do another. This short doc by @AlykhanPabani & @theurbangeog
exposes what they and other ESN volunteers have been documenting on the ground. https://t.co/SeFMSDKTxm

Throughout the pandemic, the clearing of tent encampments across Toronto has stripped residents of the shelter and community support found in urban parks. Although the City of Toronto has claimed that they would only be cleared once all residents are offered spaces in shelters, continued evictions tell a different story. In early January, for example, an encampment near the wealthy Rosedale neighbourhood was cleared by the City, with a recent fire cited as the cause. It was, according to the authorities, a matter of public safety.

This month, the same rationale of fire safety was used to justify a municipal injunction preventing carpenter Khaleel Seivwright from providing vulnerable Torontonians with insulated temporary shelters. And while Seivwright’s carefully designed enclosures were each equipped with a smoke and carbon monoxide detector as well as a small fire extinguisher, the City still deemed them unsafe.

“The money the City is spending to attack me could be put into safe housing for those that need it,” Seivwright said in a statement provided via his lawyers this week. It’s a powerful rejoinder, especially considering that basic supportive housing services remain woefully underfunded. As for the encampments? As activist Cathy Crowe noted on Twitter, the City could have invested its energy in providing residents the same type of fire safety amenities that Seivwright had thoughtfully offered — potentially preventing subsequent deaths. The municipality has opted for evictions and injunctions instead.

Recent fire being used as an excuse by City of Toronto to evict #homeless in Rosedale Valley. If city wants to minimize fire risks these should be provided to outreach agencies. Fire vessels. @metromorning @RafiInterfaith @c_shadowspaces @SHJNetwork @OCAPtoronto pic.twitter.com/ECX5z4qDrX

In the long term, however, the real solution is social housing, and lots of it. In rapidly building new modular homes, the City of Toronto has taken a small step in the right direction, shedding the layers of regulatory bureaucracy and procedure that so often veil regressive politics. But in effectively criminalizing encampments and park shelters, it has embraced old ways with devastating new effect.