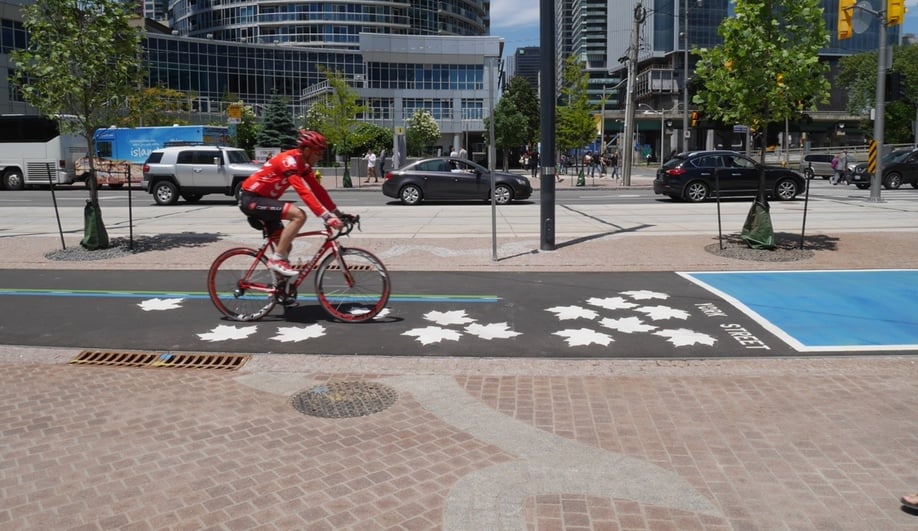 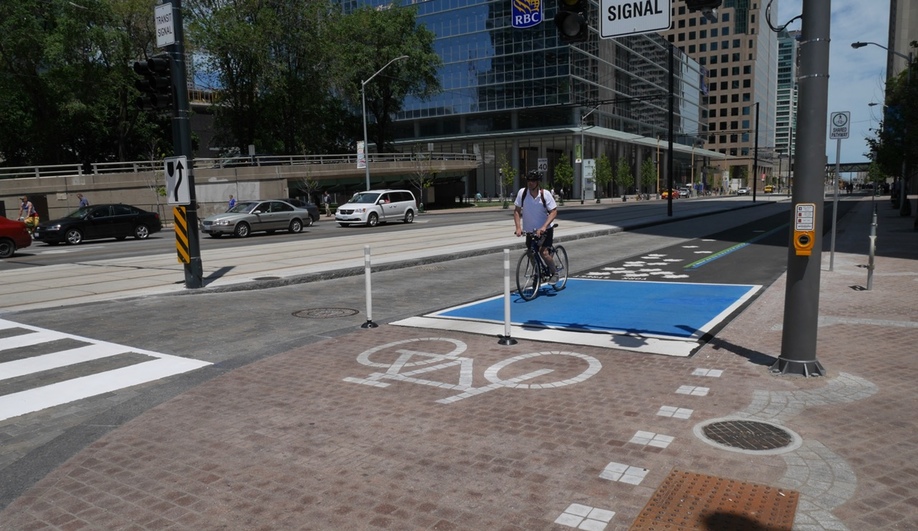 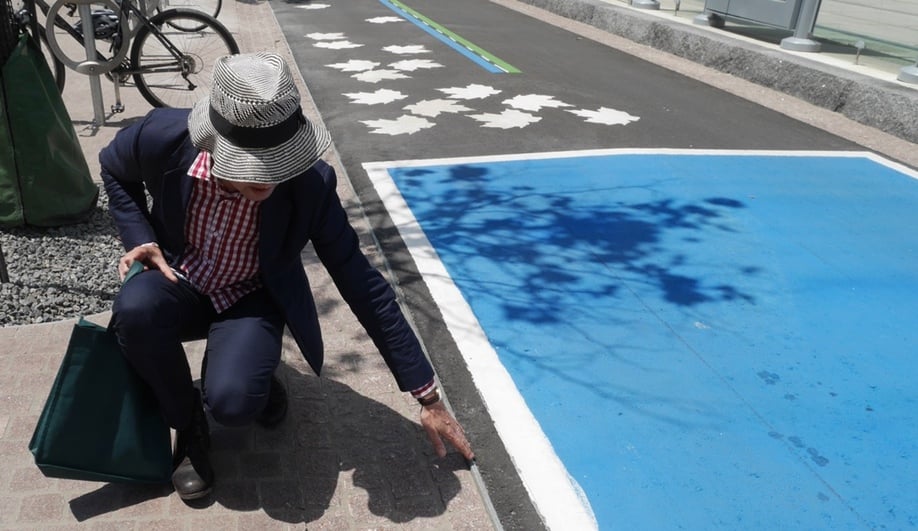 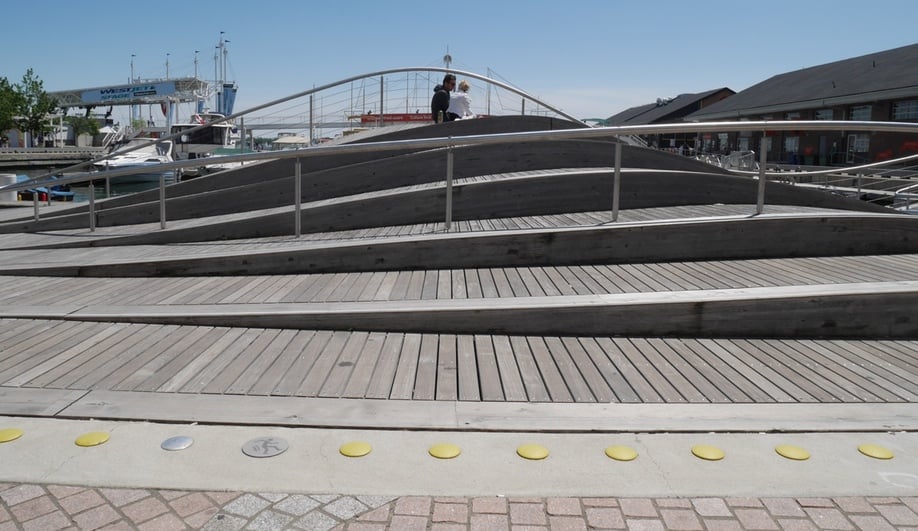 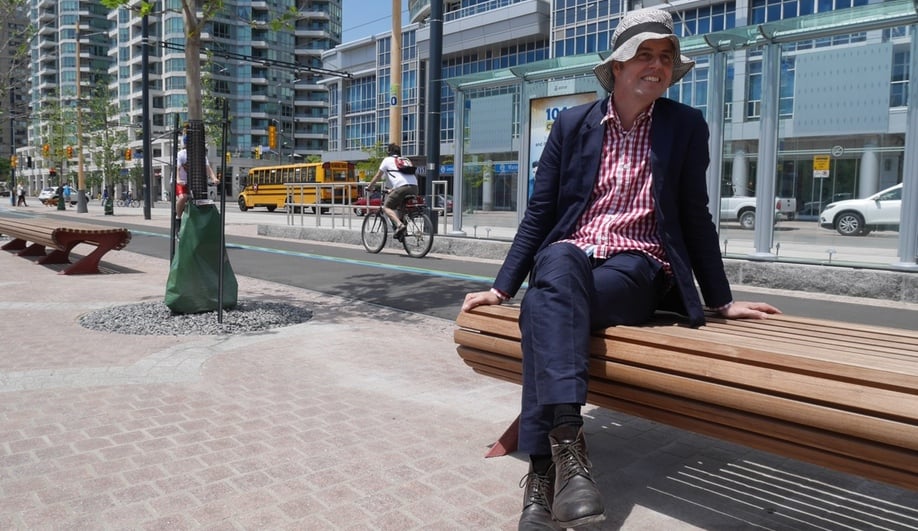 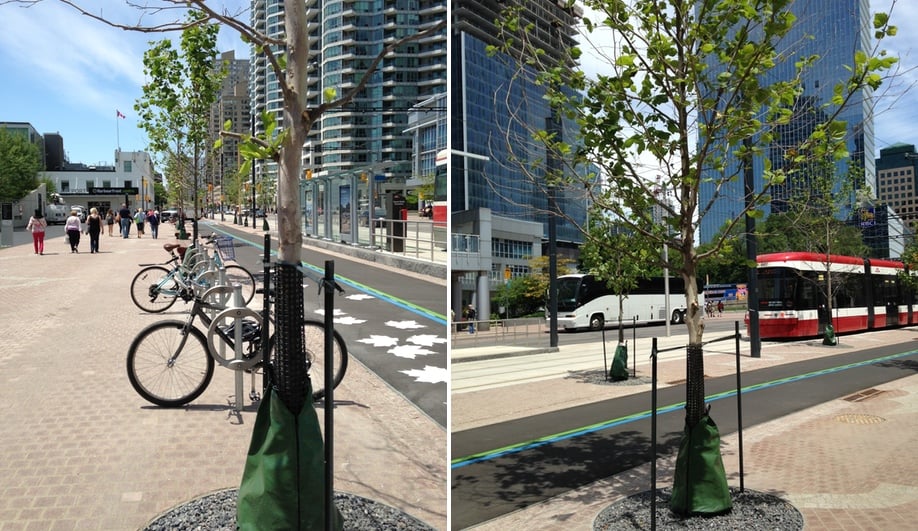 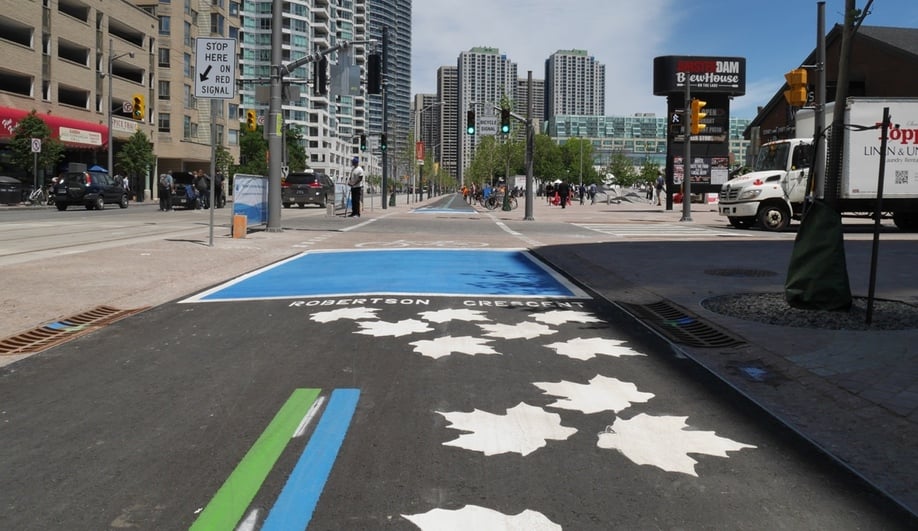 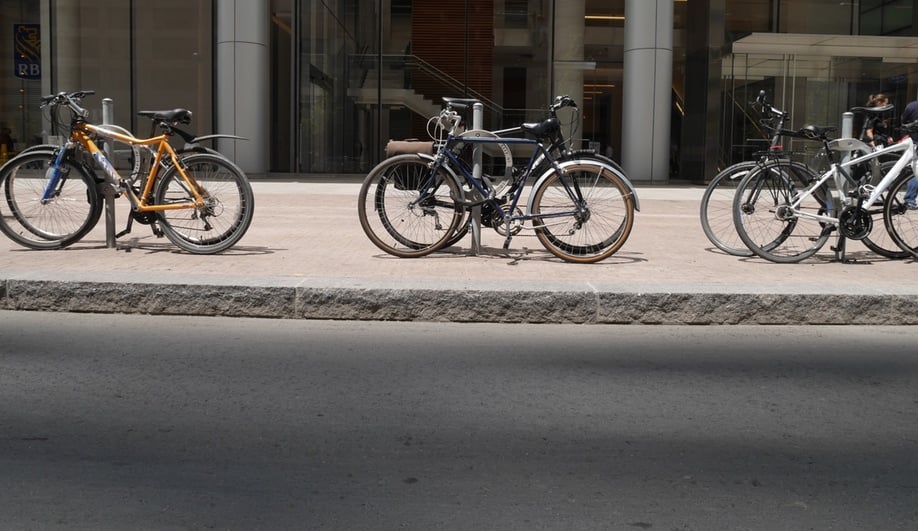 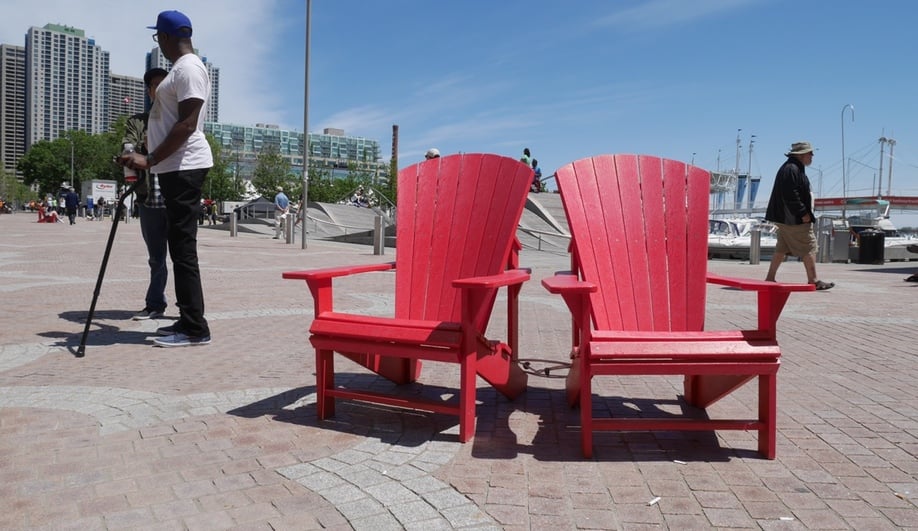 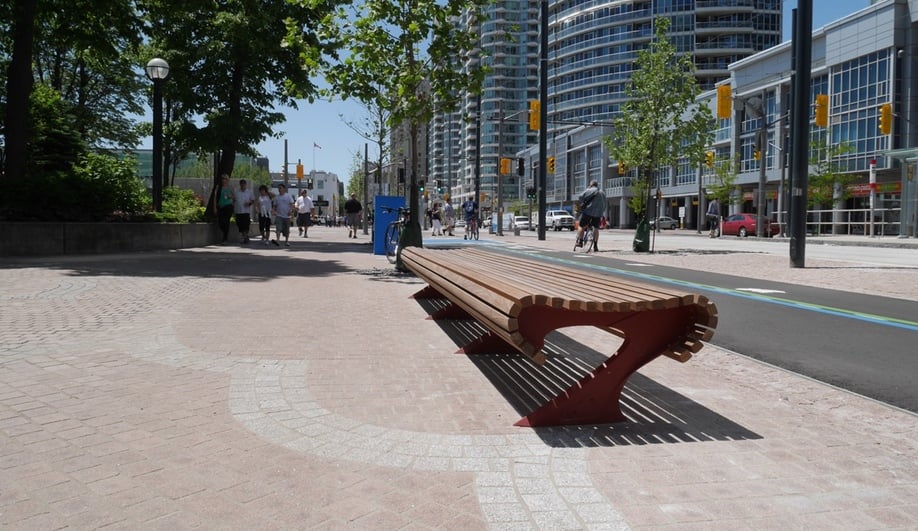 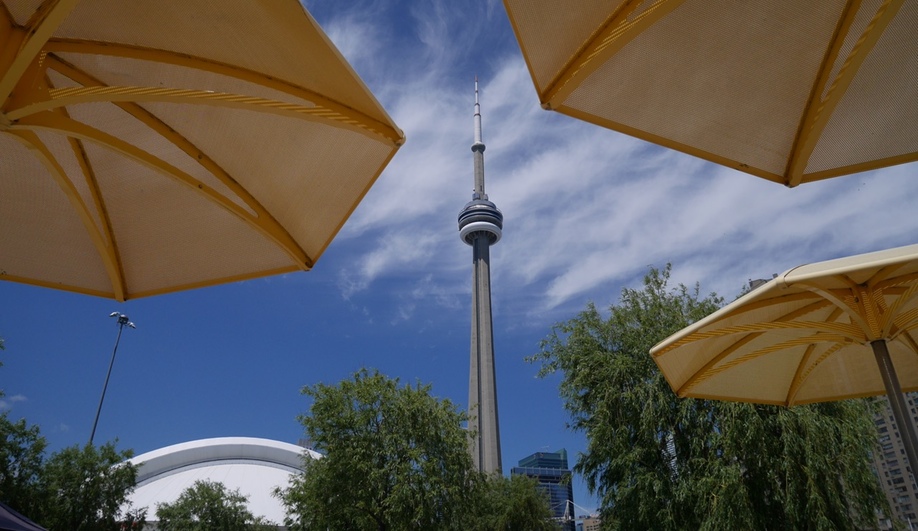 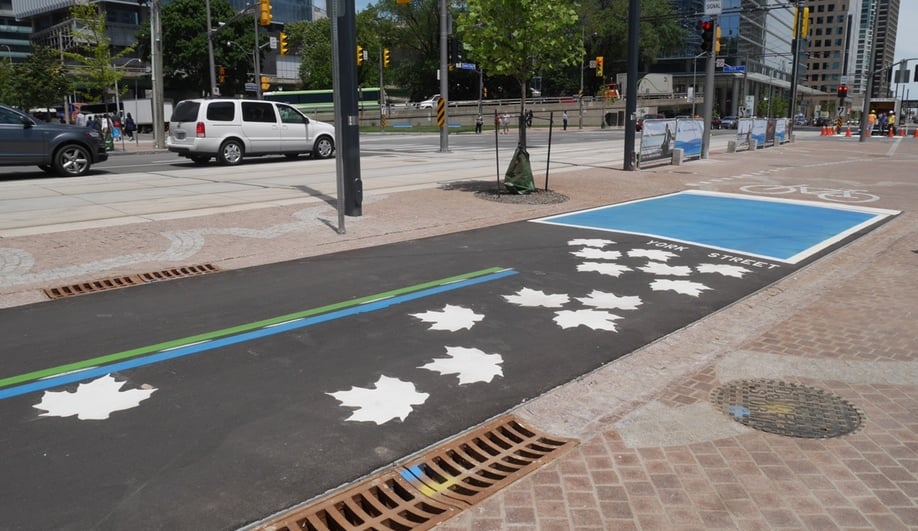 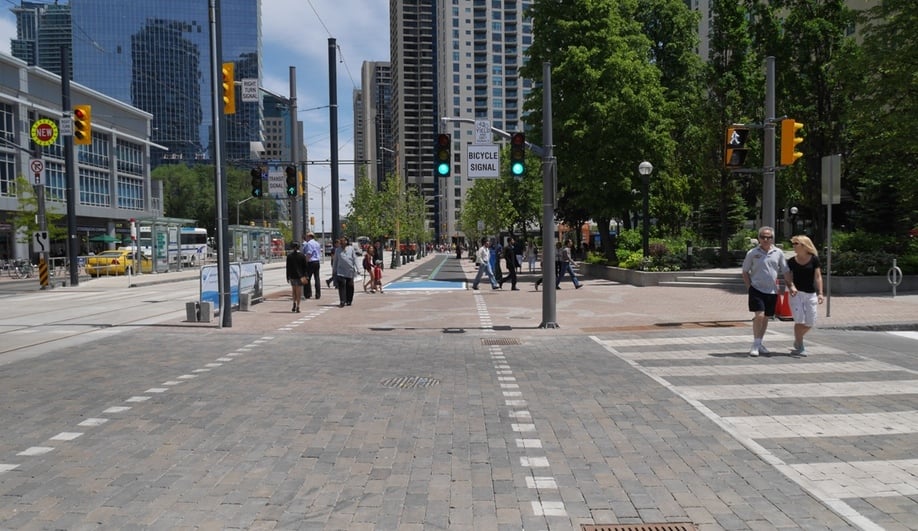 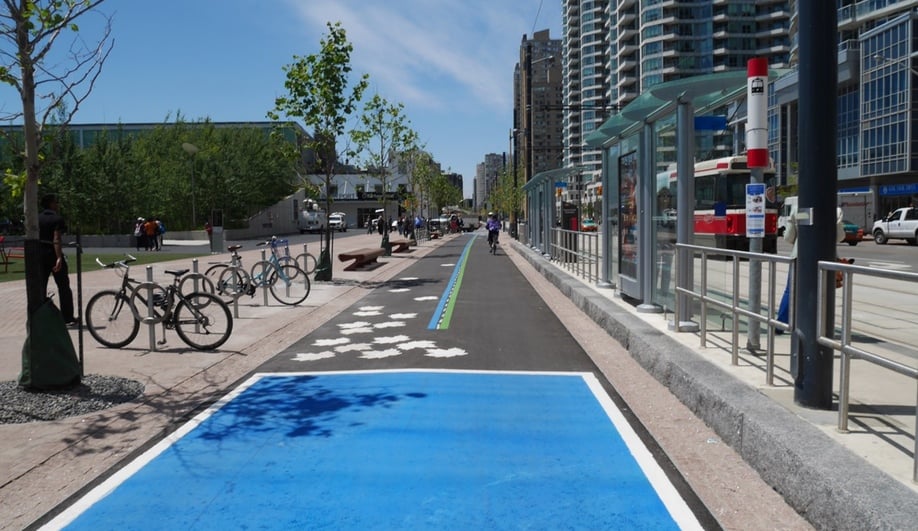 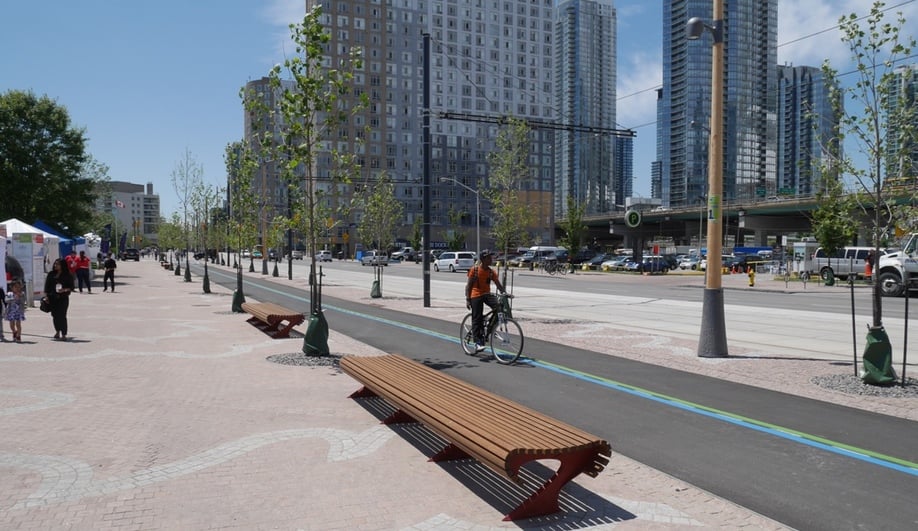 Toronto’s Queens Quay West used to be an eyesore, a mean concrete jungle and a symbol of how the city had turned its back on its waterfront. “When we came for the first time, to start the work, there were only dry-cleaning businesses. There was nothing here, there was nothing!” Adriaan Geuze said. On Friday, the landscape architect was in town to inaugurate the opening of 1.7 kilometres of re-animated public space along the now-vibrant spine of Toronto’s transformed waterfront. In the evening, a jubilant ribbon-cutting ceremony was attended by politicians and members of the public, and earlier that same day, Geuze led Azure and Designlines on a tour of the project, which runs from Bay Street in the east to Yo Yo Ma Lane in the west.

In 2006, Geuze’s firm, West 8 of the Netherlands, along with Toronto’s DTAH, were chosen in an international competition to revitalize the waterfront. And that they have done. On the south side of the street on Queens Quay West, the streetcar tracks give on to a two-way bike lane; the 3.6-metre-wide asphalt path, an extension of the 17-kilometre Martin Goodman Trail, features bright white maple leaves painted on its surface where it nears traffic signals, which include Audible Pedestrian Signals. The asphalt transitions into a red-and-grey granite promenade that, at 7.2 metres in width, kisses the waterfront slips. These deft moves altogether form a brilliant interplay of programming that allows pedestrians and cyclists to fully enjoy the waterfront.

Geuze marvelled at the instant popularity of the bike paths and the promenade. “The interface of the waterfront with the Wave Deck and slip ends is the point of culture, of interaction, of meeting – and I’m so proud to see that. I mean, it’s not even the weekend, just an ordinary day at lunchtime, and it’s crazy. It’s fantastic.”

In fact, the public has craved this intervention for a long time, and when West 8 and DTAH received the commission, the firms sought to give them what they wanted. “When we talked with people, I asked them, ‘What is your mental map of the Canadian lakeshore?’ They said wooden decks and Muskoka chairs, lots of trees – the idea of sitting on a dock,” says Geuze. “So we figured out how we could implement that very simple DNA, that Canadian-style collective memory.”

Over the past decade, the design team has worked in the master plan’s elements, from elegant ipé benches to cedar light poles, throughout the waterfront. Completed a few years ago, the Wave Decks are now beloved gathering points; at Sugar Beach, the tree canopy and granite pavers, sometimes forming giant maple leaf outlines, help make the park the urban gem that it is.

Now these strokes are part of a much larger tapestry, one that will one day stretch east and west to encompass 3.5 kilometres. To display the granite craftsmanship, Geuze kneeled down to touch the pavers; 2.3-million stones were used in total. Where the bike lane meets the promenade, a rougher channel of pavers marks the transition. “Every stone was laid by hand, there was no machine involved here,” said Geuze. “This is the sort of craftsmanship we don’t often see.”

Then there are the trees – two rows of 156 London plane-trees on the south side form a double allée. On the north side, where automobile traffic is now isolated and laybys allow for drop off and pick up, 74 additional trees (including maples and elms) have been planted. All are set into tiered Silva Cells that will create a web of roots, a veritable forest, below the street. “This is not some cherry trees on top of a parking garage,” said Geuze. “In the future, from the lake you will see the Toronto silhouette with a green foot. Nobody thinks about these things, but I think that is cool.”

SHARE
Twitter, Facebook, LinkedIn, Pinterest, Email
TAGS
Urbanism,
AZURE is an independent magazine working to bring you the best in design, architecture and interiors. We rely on advertising revenue to support the creative content on our site. Please consider whitelisting our site in your settings, or pausing your adblocker while stopping by.