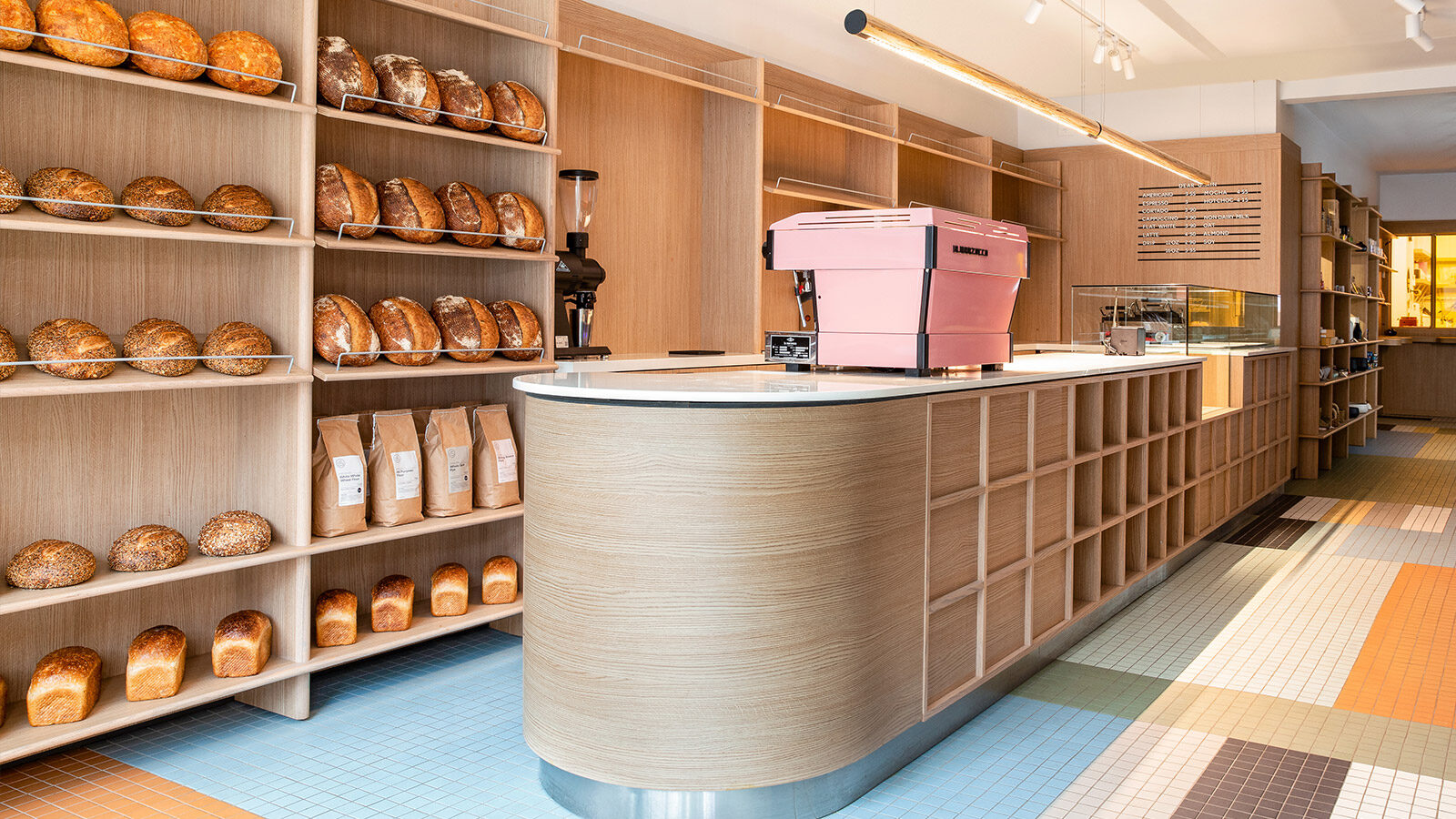 Future Studio bakes up a bread lover’s paradise that conveys the nourishing powers of a perfectly crusty loaf.

As winter’s chill sets in, good bread makes for a classic source of comfort — and a trip to the neighbourhood bakery only deepens one’s appreciation for the magic of wheat, yeast and flour. In Toronto, the latest destination for gourmet carbs is Dear Grain Sourdough Studio, which began selling its slow-fermented loaves in Hamilton before opening its new headquarters on Ossington Avenue in November. 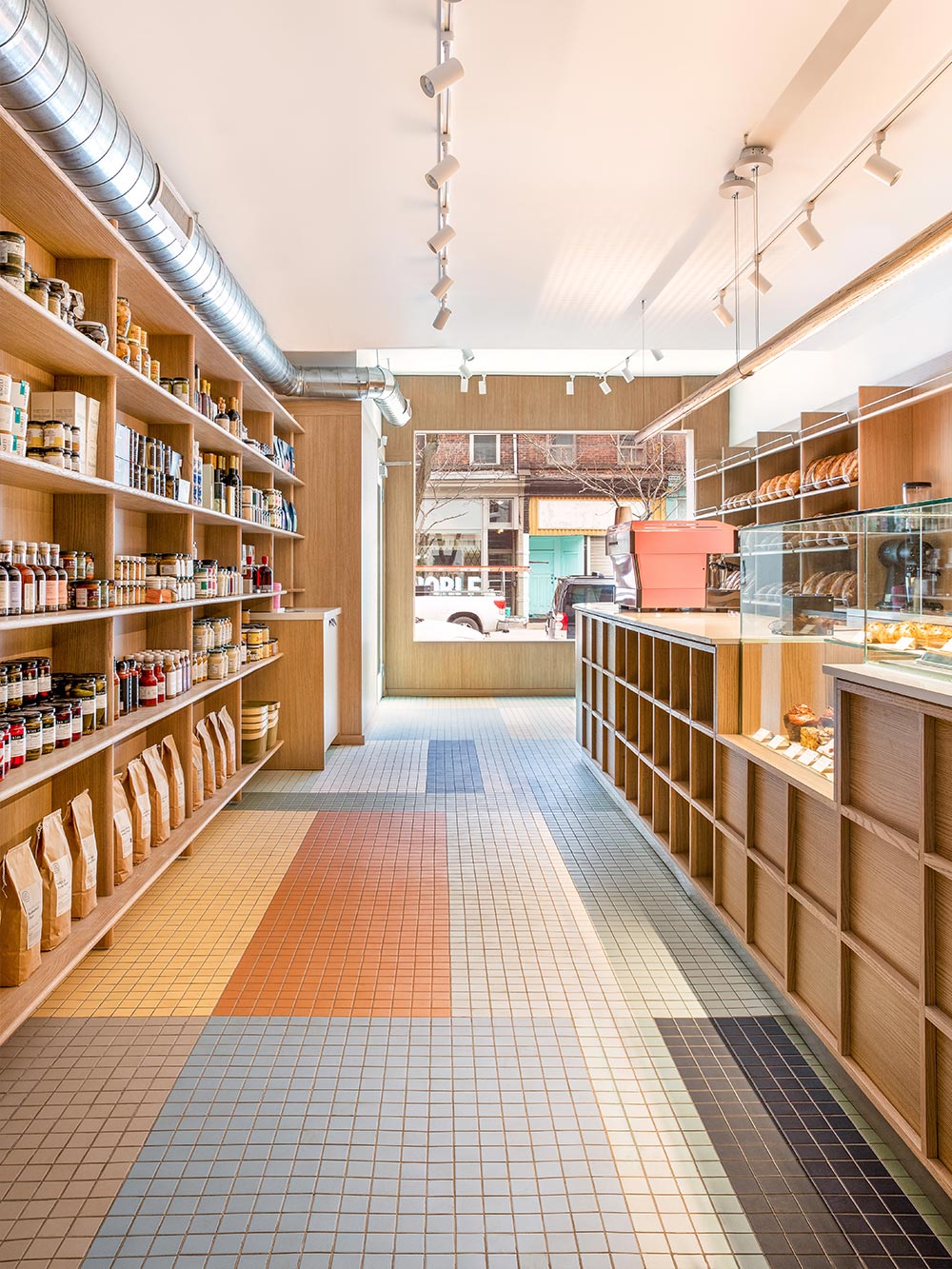 To design their new digs, Dear Grain enlisted the team at Future Studio, which tapped into bread’s warm, wholesome identity to develop a toasty, modern take on the traditional boulangerie. “The initial brief we received was that they wanted it to be a kind of bread museum — expressing the idea of baking as theatre,” says Future Studio creative director Ali McQuaid Mitchell. Clad in a combination of oak and oak-like melamine, the serene, orderly space feels like the inside of a giant wooden bread box. Custom, rounded-edge shelving effectively sets the stage for classic, multigrain, and chocolate cherry bread loaves, along with a curated selection of condiments and homewares. 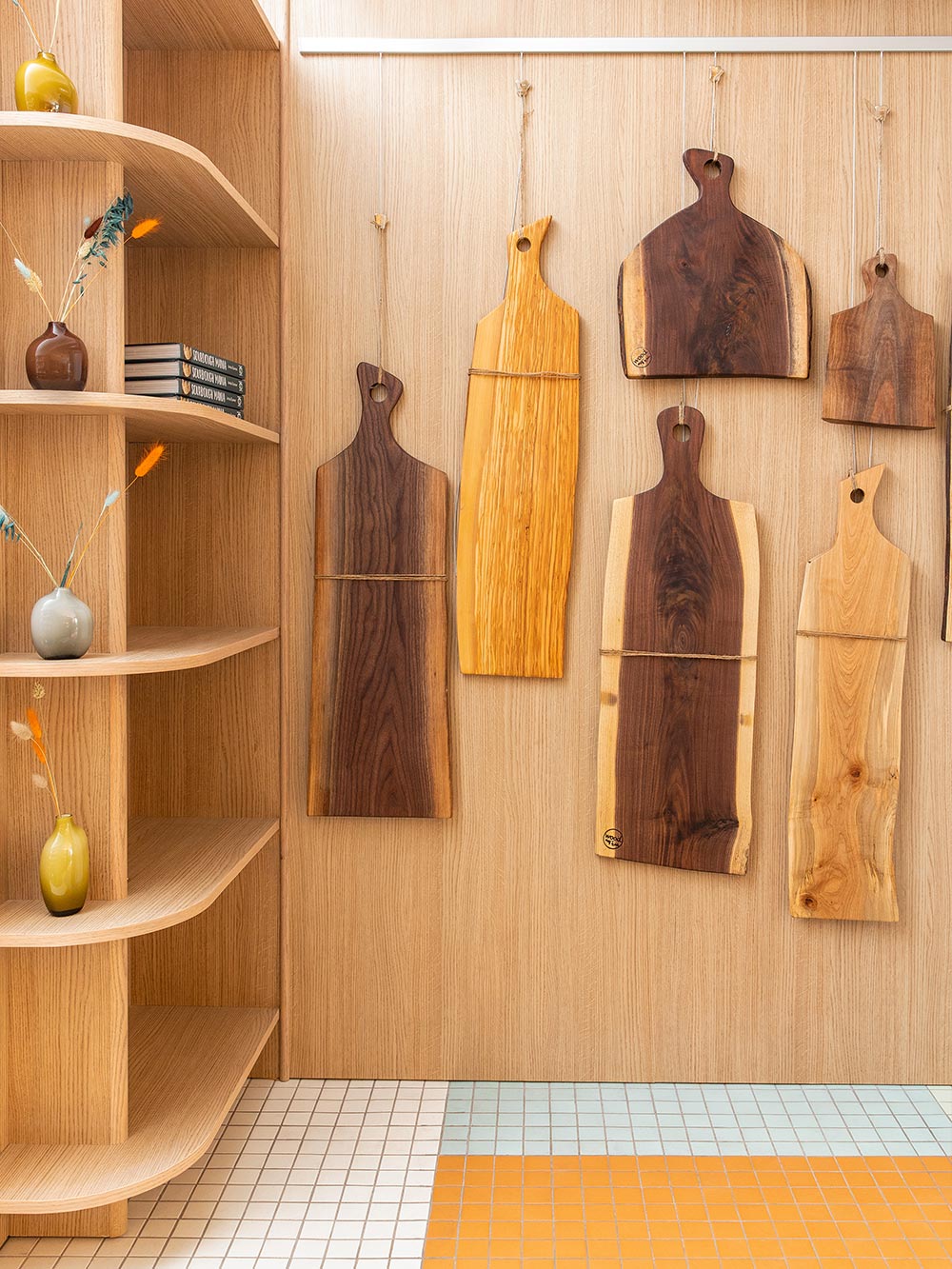 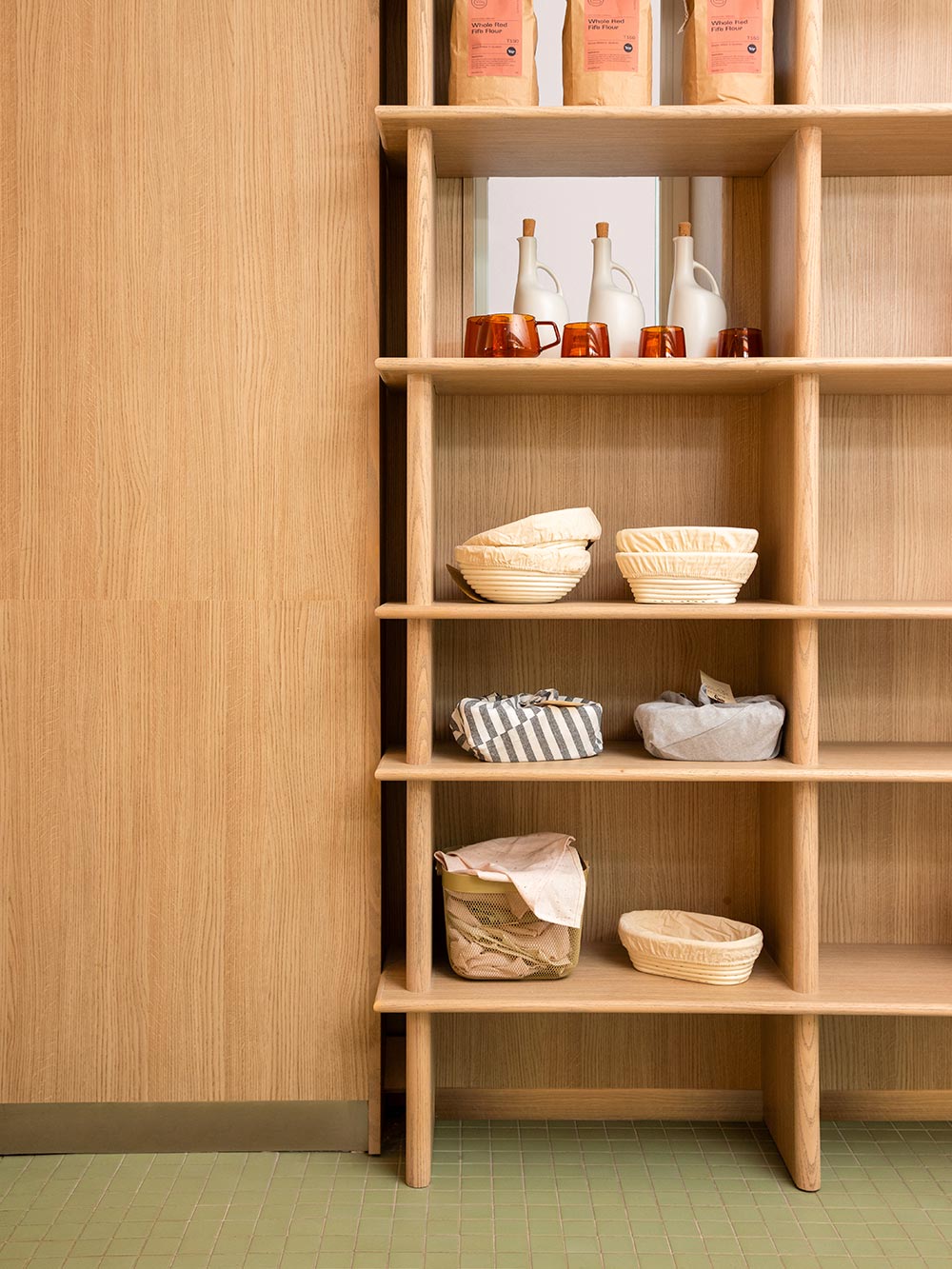 “The challenge with designing retail is that you have to constantly remember the reality of the store being filled with stuff,” says McQuaid Mitchell. “The shelving running through the whole space gives the products a shared backdrop, so that visually, they’re part of the same thought. And the owners have sourced so many amazing things — all of these really interesting tinned fishes and sauces and oils.” 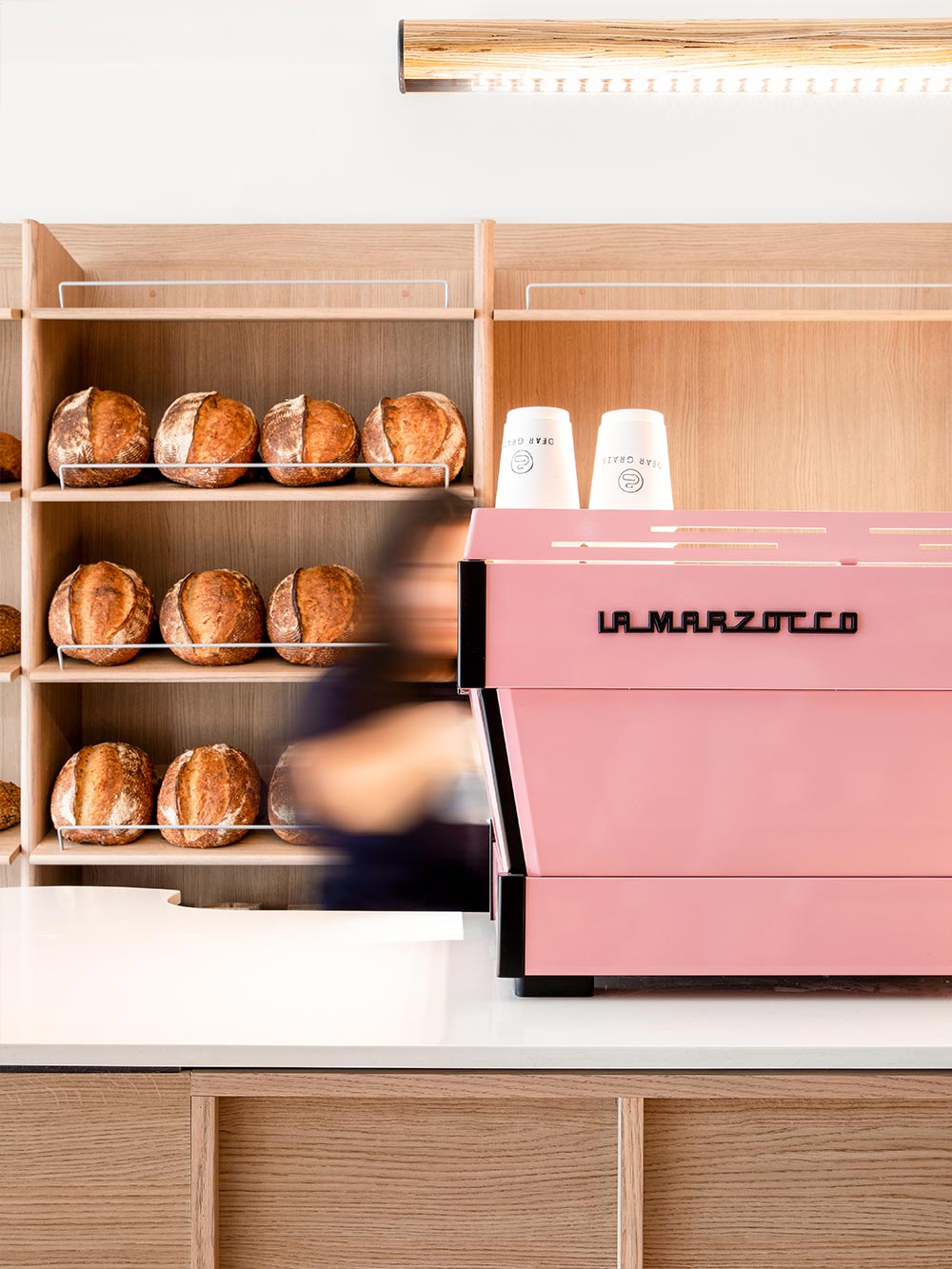 Indeed, as delicious as the bakery’s bread is on its own, it also makes for a great vessel for flavourful toppings. Appropriately, Dear Grain’s interior also makes room for two colourful accents of its own: a bright pink La Marsocco espresso machine perched on the front counter, and a geometric arrangement of colourful square floor tiles. “The tile pattern is based on these Bauhaus textiles that we came across,” McQuaid Mitchell explains. “It was a fun and inexpensive way to bring some art into the space, and to get back to that idea of bakery-as-museum.” 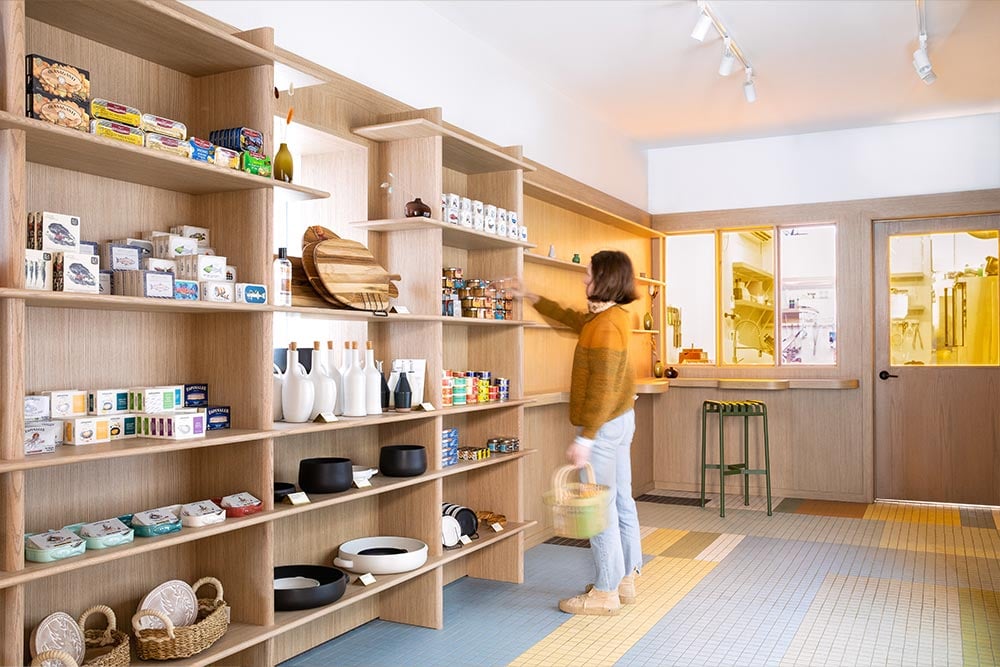 For those eager to dig into a sandwich or some brioche, the shop also includes a small seating area at the back, complete with a curved countertop that recalls the knotty topography of a particularly crusty loaf. “It’s based on a similar almost-table drink rail that we designed at Bar Piquette,” says McQuaid Mitchell. “It’s great because it can seat people on stools, but also accommodate people standing up for a quick lunch. And right now with the pandemic, it’s also functioning well as extra retail display space.”

At the very back of the shop, a window looks onto the bustling kitchen, spotlighting baked goods that are still in progress to inspire return trips.

Future Studio bakes up a bread lover’s paradise that conveys the nourishing powers of a perfectly crusty loaf.