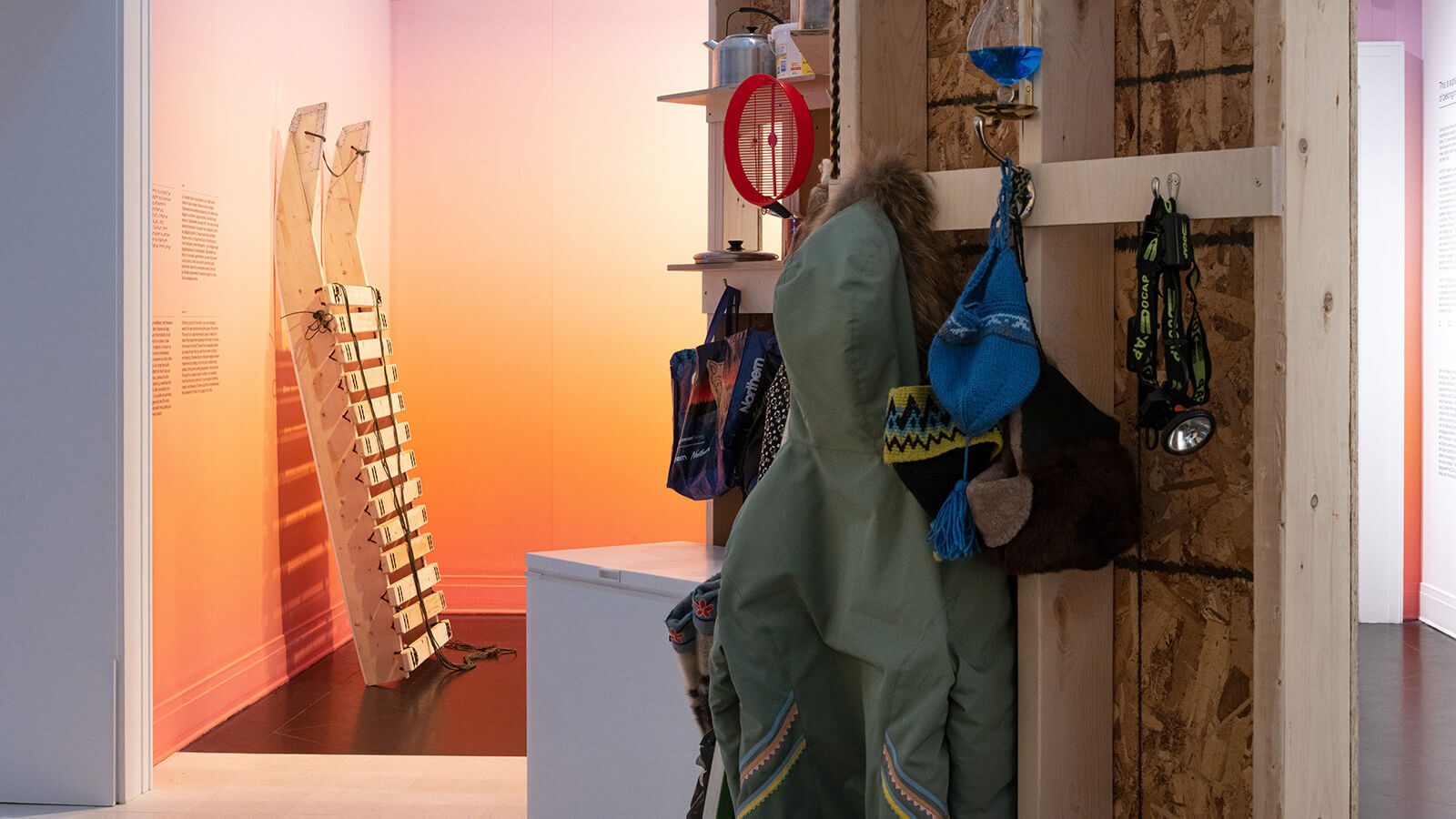 Susan Nerberg reflects on Towards Home, and how her Sámi heritage has shaped her own connection to the land.

If home is where the heart is, then coming home is to become true to oneself. In my case, this notion of coming home underpins my commitment to decolonize – to take back the Sámi self that would have resided in and with me had it not been for the forced assimilation of my grandparents and several generations before them. They, and by extension I, have been knocked off the places where the heart is, and I’m trying to find my way back, towards home.

So for me, Towards Home, the exhibition currently on view at the Canadian Centre for Architecture (CCA), carries special meaning. Laid out as a journey through seven galleries, it asks questions about the concept of home, what it is and for whom, through installations, video projections, audioscapes, drawings and collages. But above all, the show examines the idea of home from an Indigenous perspective, or rather, from different Indigenous points of view, through works by Inuit, Sámi, Anishinaabe, Cree and Métis artists who posit that “home” isn’t necessarily a stationary physical construct but more about land and how we relate to and interact with it.

The entrance gallery’s vestibule installation was designed by Taqralik Partridge and Tiffany Shaw.

Take the entrance gallery, for starters. An installation conceived by Inuit writer, curator and spoken word poet Taqralik Partridge and Métis architect and exhibit designer Tiffany Shaw, it takes the shape of a vestibule or enclosed porch common to northern houses. As I enter this space, I’m immediately surrounded by objects that reveal a connection to the land: Anoraks and touques and mitts hang on hooks alongside headlamps; there’s a freezer, for preserving harvests done throughout the year; and I spot boots and pails and goggles, all objects used in daily life on the land.

But the porch is also a funnel between the home outside and the hearth inside (or, at the CCA, between the world outside the exhibit and the one inside it). Walking into this gallery, I’m reminded of my grandmother’s vestibule in northern Norway, which whisked visitors away from the winds hauled hard by the Barents Sea and into the warmth and smell of butter-fried fish in her kitchen. 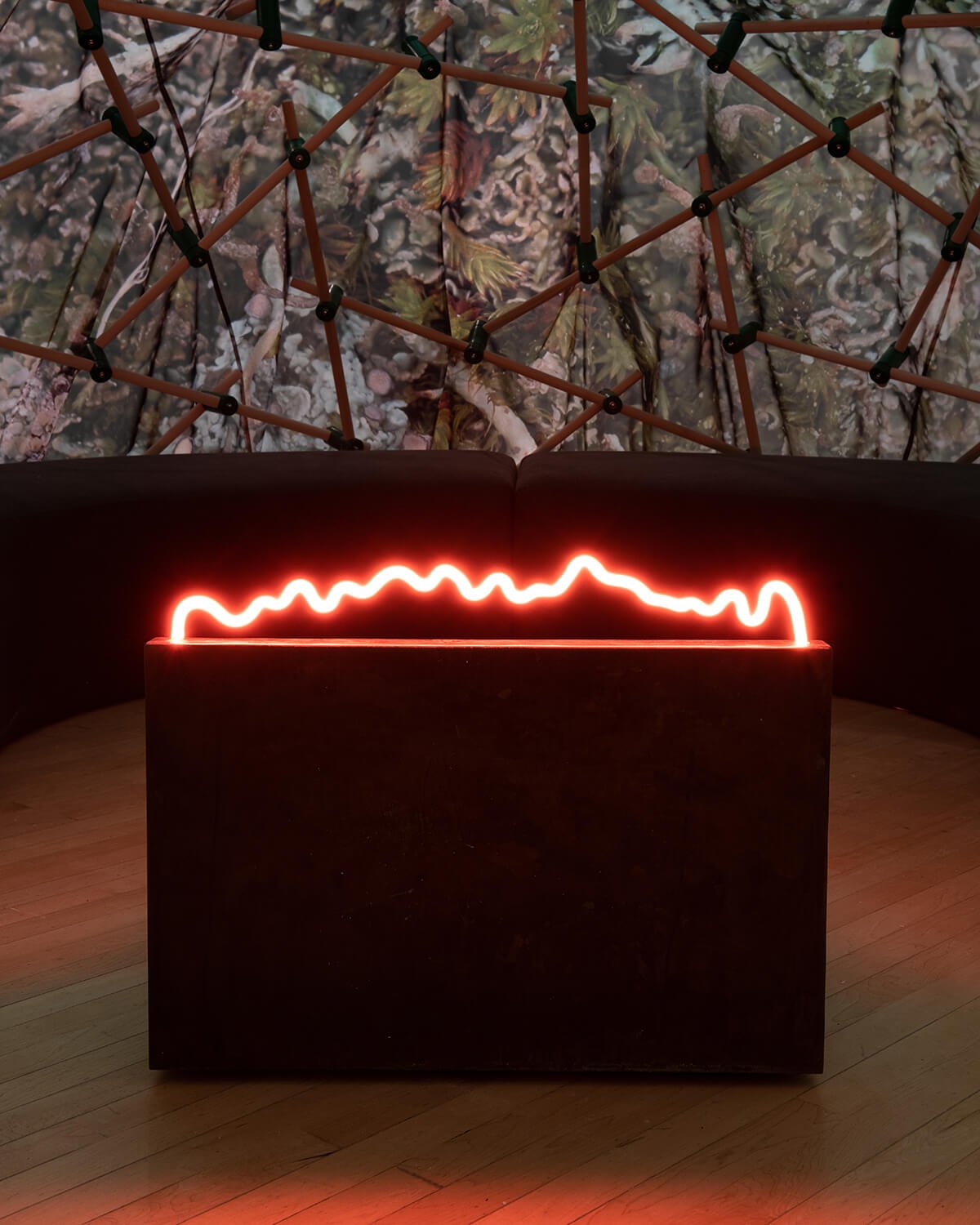 Entitled Nuna, this installation by Inuk artist Asinnajaq stemmed from a conversation with co-curator Tiffany Shaw. The light installation, Qulliq — an electronic take on the traditional qulliq, or oil lamp — is also by her.

On the show’s opening day, Geronimo Inutiq, who provided the soundtrack in one of the galleries in the form of a radio show in Inuktitut, English and French, talked about how the idea of home can encompass both memories and possibilities. Memories are represented here in, among other things, video projections by Inuit artists Taqralik Partridge and Laakkuluk Williamson Bathory, who expound on how colonialism has robbed Indigenous Peoples of self-determination, creating homelessness, unemployment and food insecurity. 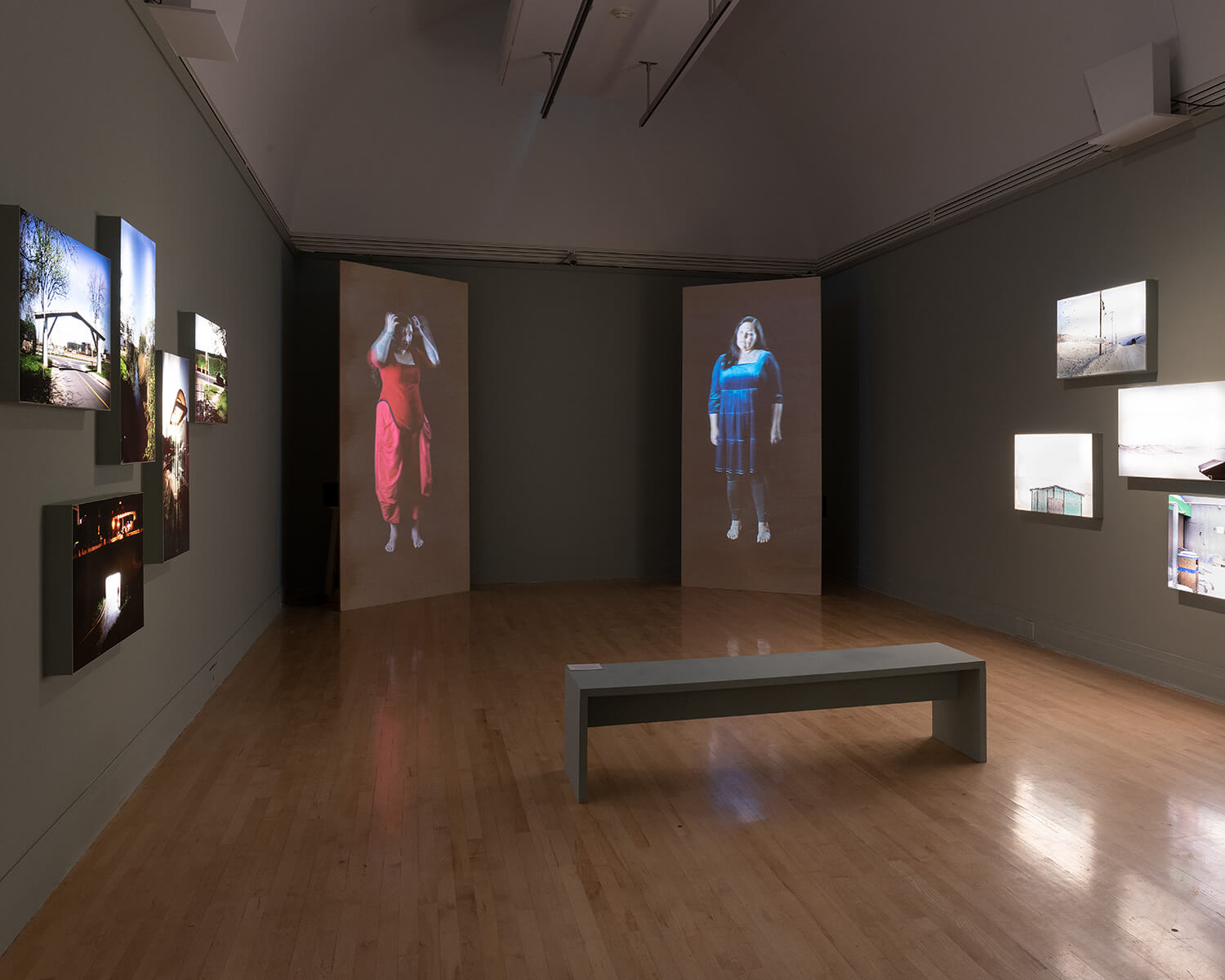 Larger-than-life video projections in the work Inissaliortut / Making Room by Laakkuluk Williamson Bathory and Taqralik Partiridge feature the artists speaking about the implications of colonialism and loss of home.

Memories imbue the Sámi Architectural Library, Nango’s way of relating architecture to the land through a collection of books and objects, including tanned reindeer hides. The possibilities of what home can be comes to life in the gallery that houses works from Futurecasting: Indigenous-led Architecture and Design in the Arctic. The Indigenous-curated, CCA-led workshop series gathered Indigenous designers from across the northern hemisphere to reflect on how the concept of home stems from cultural values and kinship with the land. 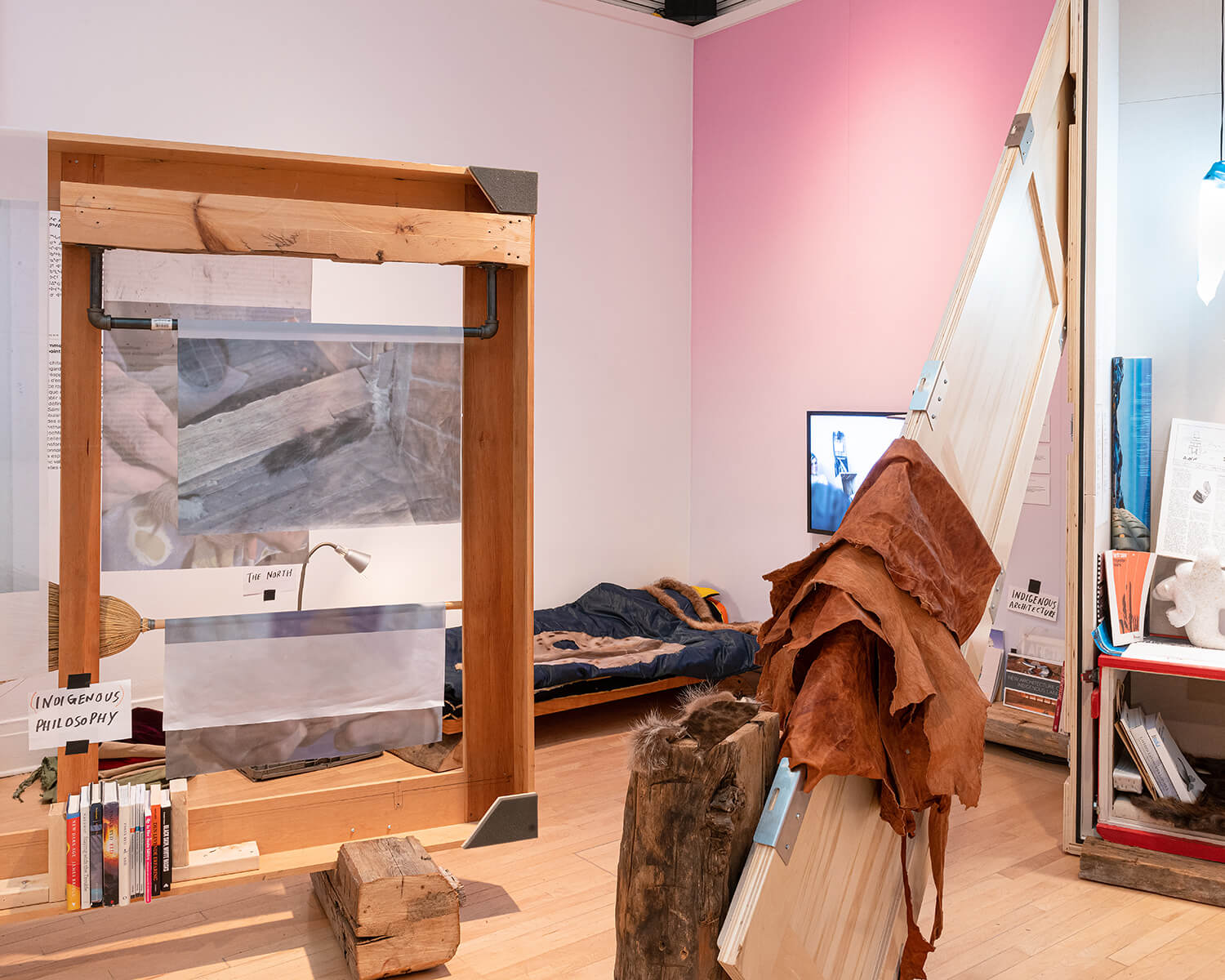 Joar Nango’s Sámi Architectural Library, an iteration of the nomadic installation that has previously been shown at the National Gallery in Ottawa and elsewhere.

I bring this memories-possibilities duality with me as, shortly after the show’s June opening, I travel from Montreal to northern Norway – the western extension of Sápmi, the traditional homeland of the Sámi – to reconnect with the places of my father, my grandparents, my ancestors. The messages and the questions posed by the co-curators of Towards Home serve as a guide of sorts for my own journey to decolonize and deepen my connection with Sápmi. 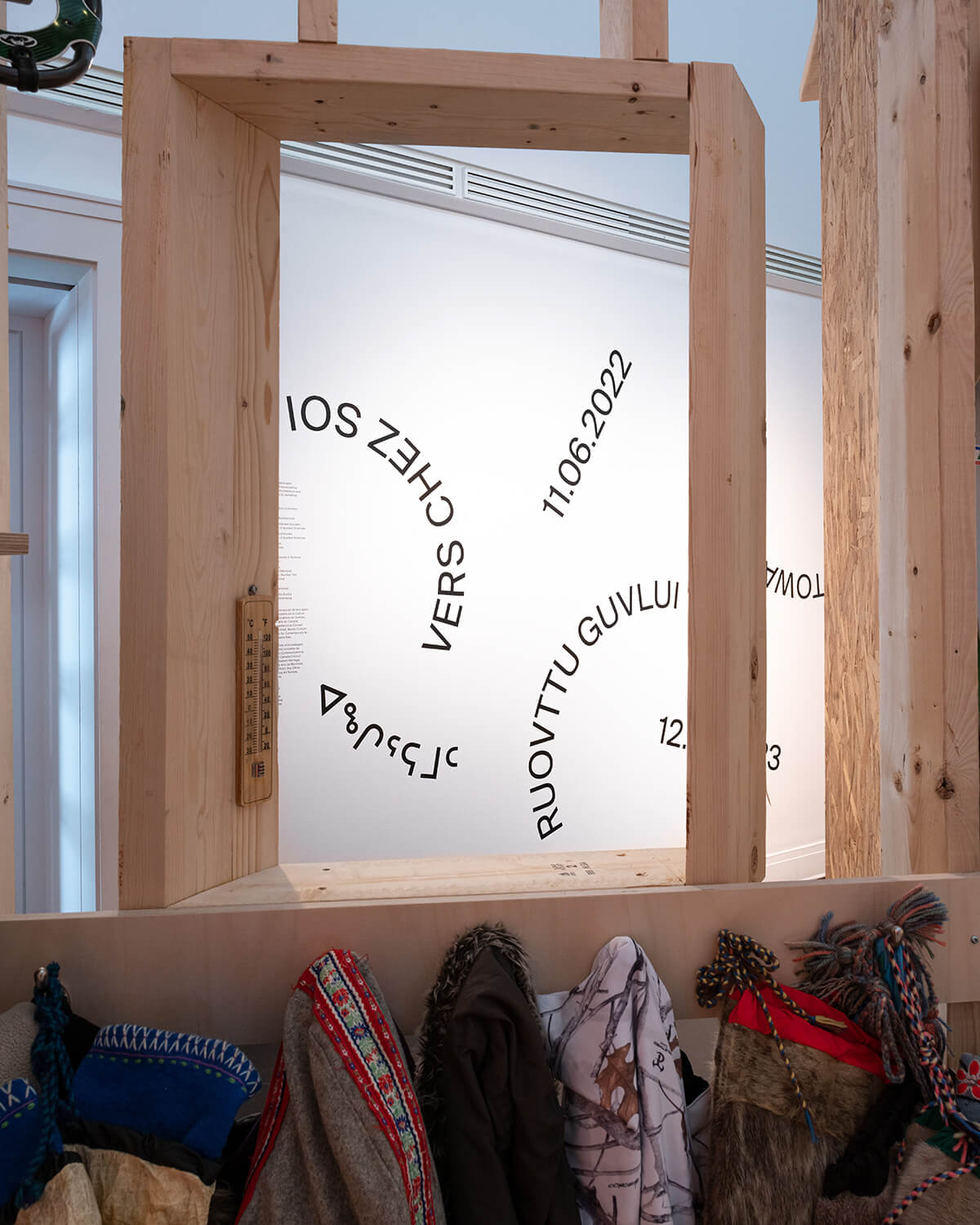 The entrance gallery’s vestibule installation was designed by Taqralik Partridge and Tiffany Shaw.

Home, I realize as I ford creeks and trek across tundra, isn’t just the structures that protect us from the elements; home is a verb that encompasses different ways of connecting with the land and our reciprocal relationship with it. Home is in the act of pitching my tent in front of the remnants of the timber house where my great-grandfather grew up, or listening to the breathing of whales in the sheltered fjord where my grandmother was born and would have helped her mother pick berries.

My grandmother is no longer in this realm, but as I walk through the CCA galleries, I remember her porch and her kitchen and her panorama on the Barents Sea. I think about the fjord where she grew up and what could have been if she had been allowed to be Sámi, and I think about how I would have conceived of home if I had grown up with Sámi culture and traditions. In so doing, I’m moving forward on my journey to decolonize; I’m moving towards home. Because home is where my ancestors lived is where my heart is. 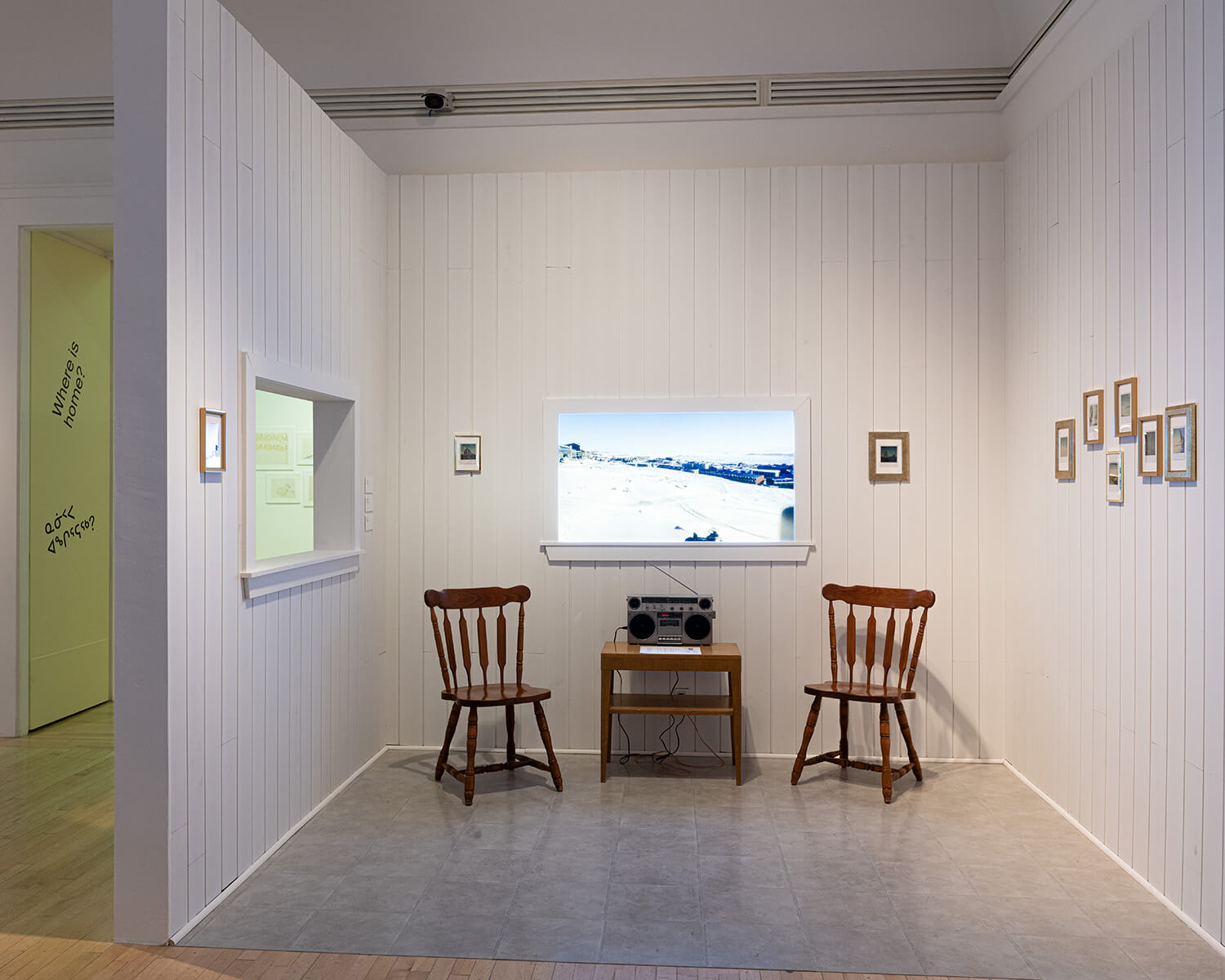 What is your concept of home? And how does it compare and contrast with Indigenous ideas and values of home? ᐊᖏᕐᕋᒧᑦ / Ruovttu Guvlui / Towards Home runs at the Canadian Centre for Architecture until March 26 2023.

Towards Home is part of the CCA taking land acknowledgements into action through what it calls “living land acknowledgement,” whereby the museum creates a platform for collaboration with Indigenous curators, artists and scholars to promote discussions, exhibits and research, making concrete what would otherwise only be pretty words.

Susan Nerberg is a writer and journalist based in Montreal. She contributes stories on climate science, the environment (both the natural and the built ones), and Indigenous rights and culture to Canadian Geographic, the Globe and Mail, Broadview and more. @susan_nerberg

Susan Nerberg reflects on Towards Home, and how her Sámi heritage has shaped her own connection to the land.