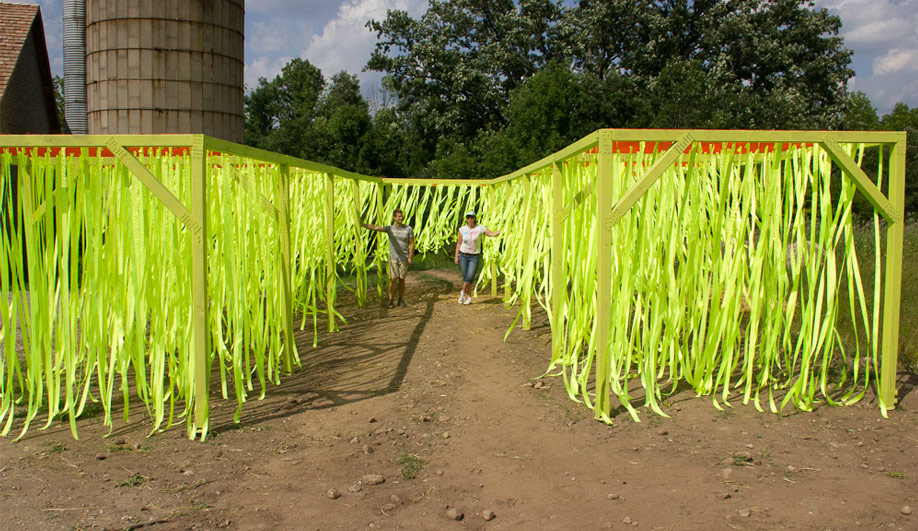 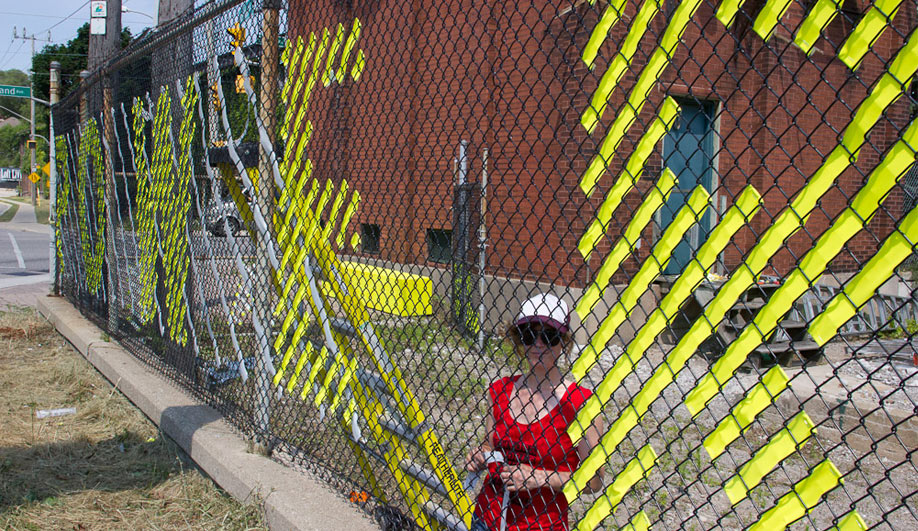 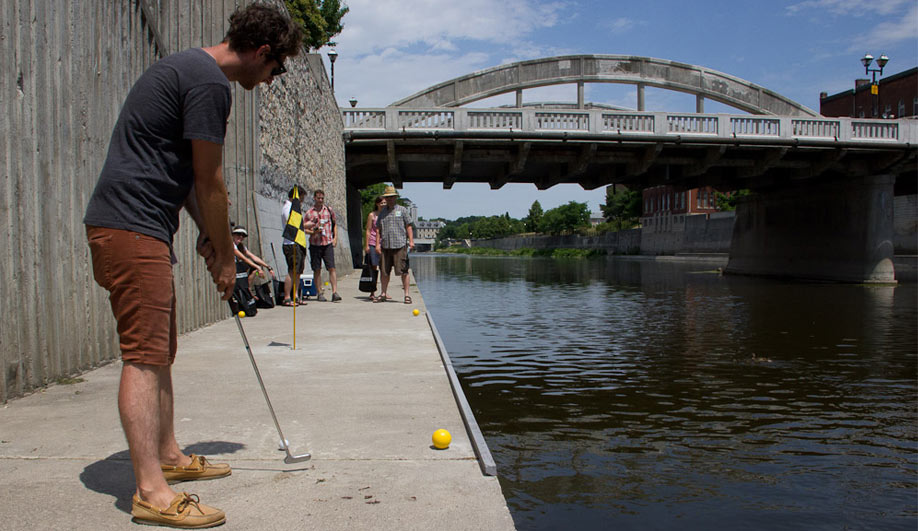 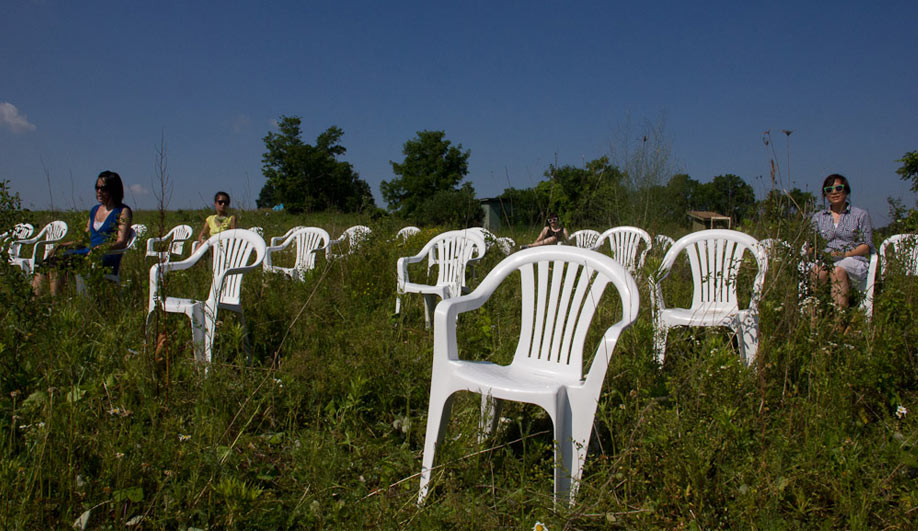 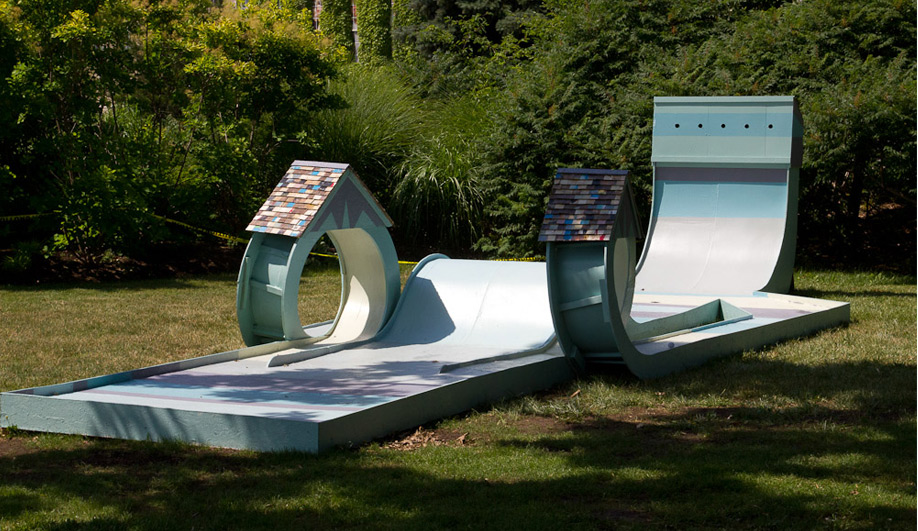 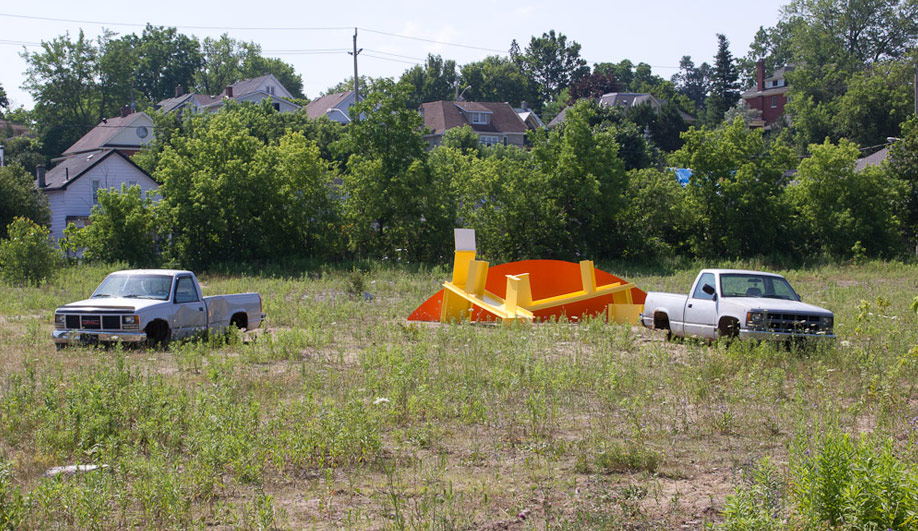 Derek Liddington’s entry, an empty lot, invites visitors to leave their mark, literally, on a sculpture including two scrapped trucks 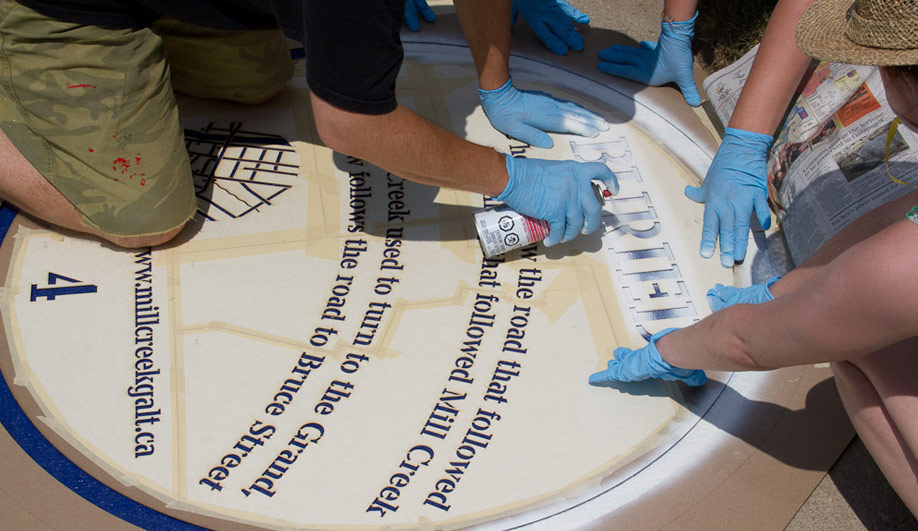 To engage the public with a message of environmental stewardship, responsible development and urban renewal, art has burst out of the galleries of Cambridge, Ontario, and spread across the city. Common Ground, a citywide initiative led by the Cambridge Galleries, injects art into the arena of daily life. Until the end of September, gallery exhibitions, public art, and participatory installations can be found across Galt, in the southern part of Cambridge. Two key components drive the initiative’s city-embracing program: 3ByLAND, a trio of site-specific landscape installations, and Mini Golf, a Social Practice, whose name says it all.

For 3ByLAND, curators worked with three Canadian landscape architecture firms to create public works at selected sites. In downtown Galt, Toronto’s PLANT Architect has installedChannelled, Buried, Moved, Lost – a tribute to Mill Creek and its once vast reservoir, dating back to the founding of Galt in 1816. Conceived as a scavenger hunt of sorts, the work traces the path of the river, now buried, mapping 10 sites along its former banks, each flagged with didactic graphics. Walkers can visit millcreekgalt.ca to access historical maps and photos to enhance their tour.

Nearby, Vlan Paysages of Montreal has installed La Lanterne using pre-existing infrastructure – the cyclone fencing around an urban power substation – as a canvas. Along a high-traffic corridor, words are woven into the fencing with bright material, casting shadows by day and reflecting light from passing cars by night. Meanwhile, at the rare Charitable Research Reserve on the northwest outskirts of town, Janet Rosenberg + Associates presents Thread, which draws inspiration from the fields of grain and the local textile manufacturing that historically drove local industry. Thread stands as a frame supporting billowing ribbons, inviting visitors to enter and imagine themselves swallowed in a field of wheat.

In addition to these outdoor works, 3ByLAND includes an exhibition of photos, film, drawings, maps and models from each firm, as well as a collaborative in-gallery installation, on view at the Riverside gallery.

Connecting these dots, Mini Golf – A Social Practice fans out across downtown Galt, turning the area into a massive nine-hole course. The sculptural putting greens made by Ontario artists include Lee Goreas’s minimalist Straight and Narrow, a regulation hole and flag installed on a walkway next to the Grand River, creating an imposing water hazard.

Then, in an empty lot, there’s conceptual artist Derek Liddington‘s The moment prior to the execution of Anthony Caro framed by the setting sun. Oh, how romantic. It recreates the forms of Caro’s iconic abstract sculptures in orange-painted MDF, flanked by two scrapped pickup trucks. Visitors are invited to chip a ball towards the hole, slowly denting, smashing, and breaking down the sculpture over the course of the summer.

Common Ground is on until September 30th, in various locations throughout Cambridge, Ontario. Visit projectcommonground.ca for the full list.

SHARE
Twitter, Facebook, LinkedIn, Pinterest, Email
TAGS
Art, Exhibition, Landscape,
AZURE is an independent magazine working to bring you the best in design, architecture and interiors. We rely on advertising revenue to support the creative content on our site. Please consider whitelisting our site in your settings, or pausing your adblocker while stopping by.