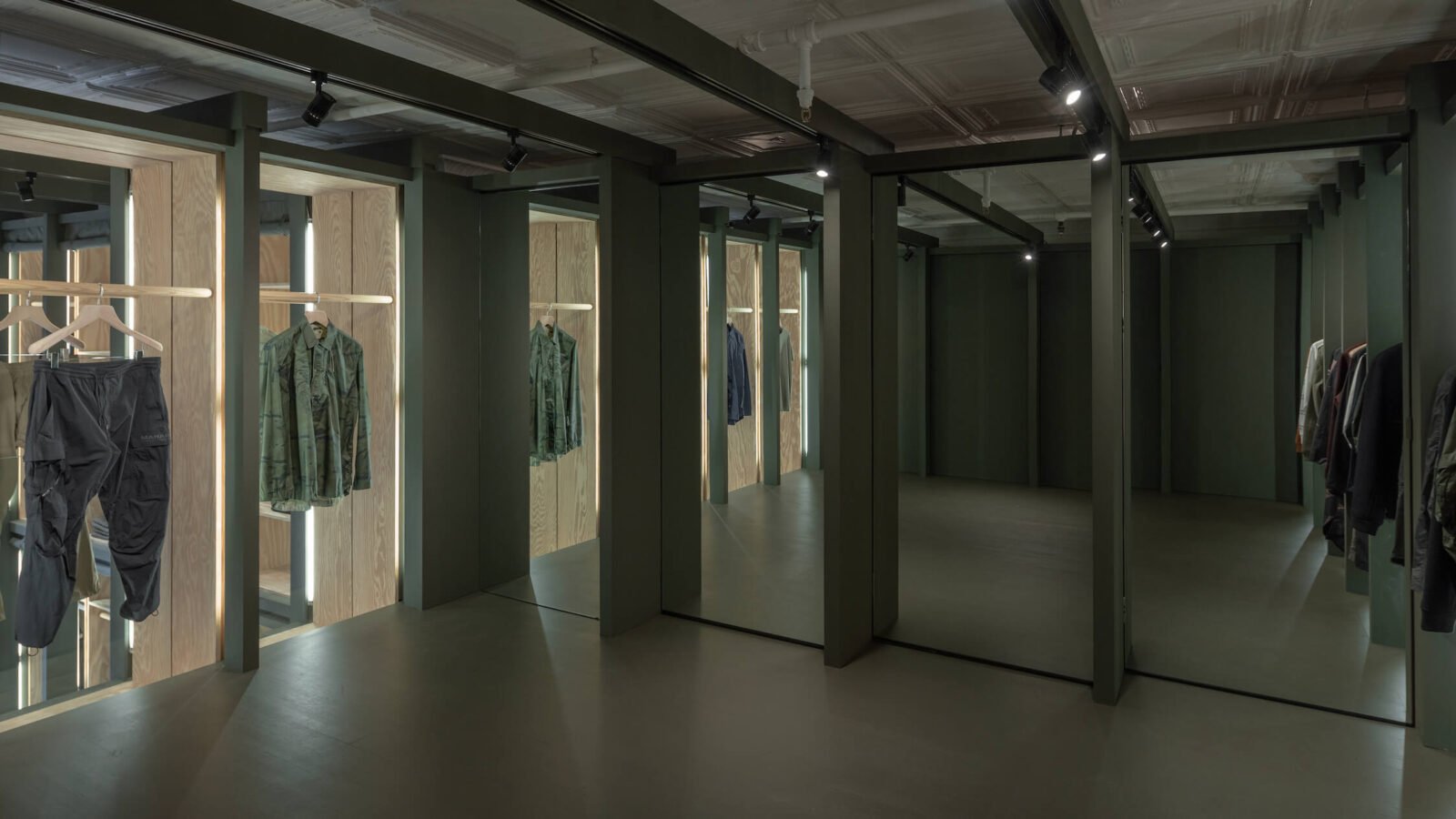 When it came to opening its first flagship outside of Britain, streetwear label Maharishi called in Brooklyn’s Abruzzo Bodziak Architects (ABA) to help realize a space reflecting both its style and ethos. Since its inception in the 1990s, Maharishi has built a reputation – and cult following – for its urban military-inspired designs made from natural hemp fibres and organic cottons, and for its commitment to recycled textiles, sustainability and ethical fair-trade production. In Tribeca, a new storefront embodies all of the above – and them some.

The shop is situated in a renovated loft building, replete with striking details like the historic façade and original pressed tin ceiling and plaster cornice and wall panelling inside. “We saw the site as a found condition,” says ABA founder partner and principle Emily Abruzzo, “and never considered removing the existing details or materials.” 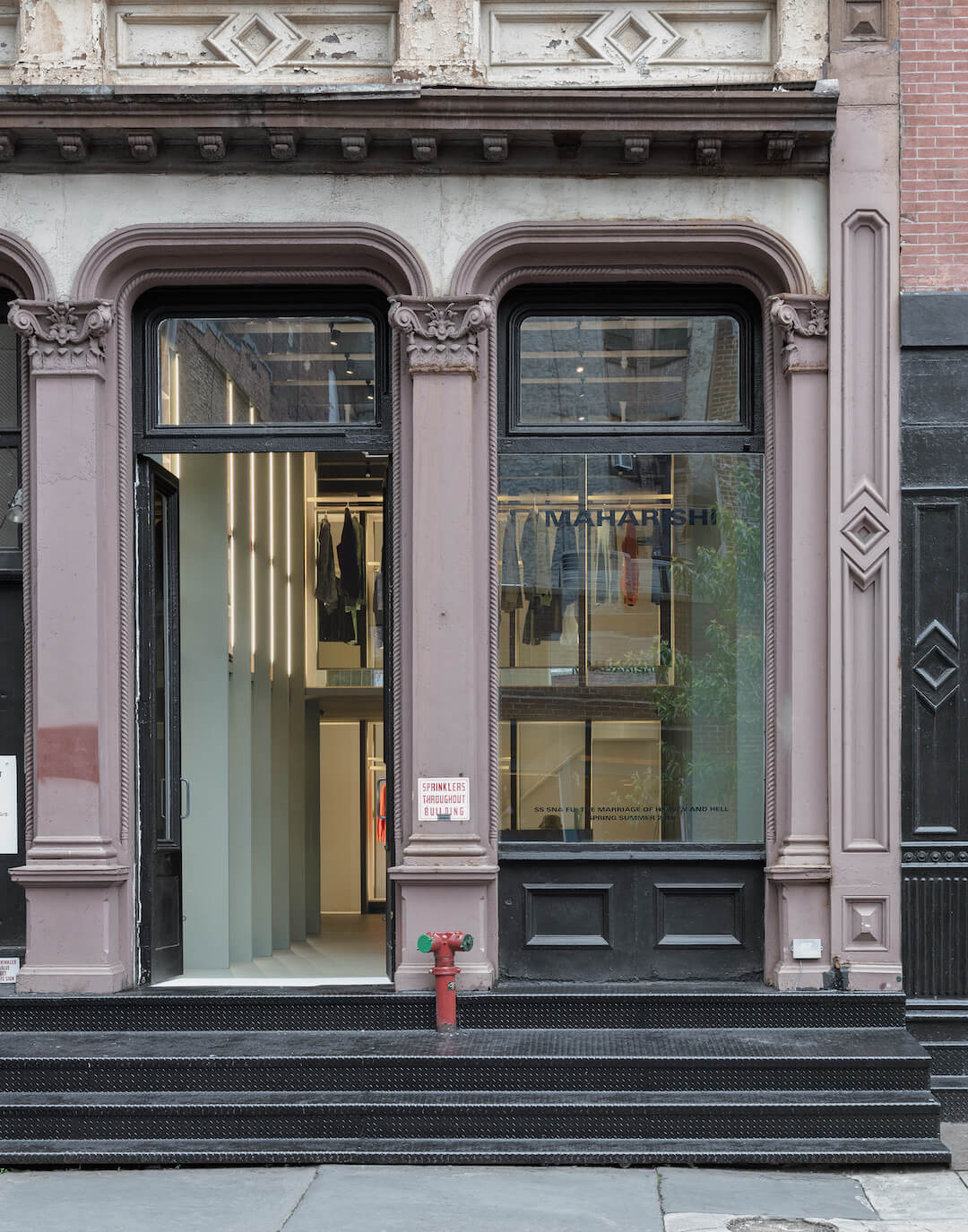 In order to preserve that character while simultaneously injecting a contemporary edge, ABA opted for what Abruzzo describes as a “building within a building.” The firm devised a two-level partially enclosed grid structure that sits within the room, exposing its architectural skeleton and providing display in repeating open volumes (each measuring approximately 91 centimetres wide by 213 centimetres high). Comprised of wood and hidden steel members, most of the structure’s components were fabricated off-site and assembled in the showroom. “The idea is that it could be considered as a reconfigurable system that could be rolled out for other spaces,” says Abruzzo. 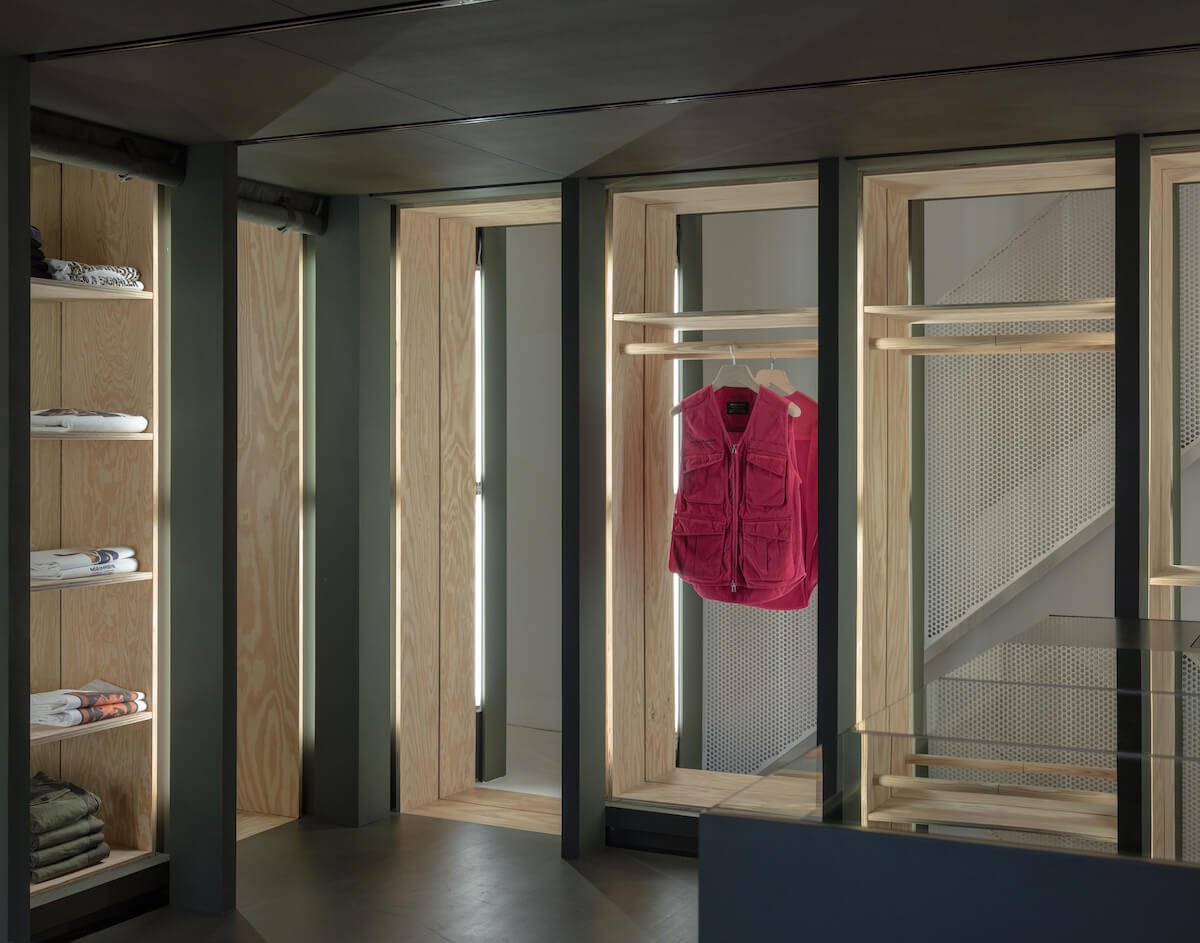 The aesthetic was informed by both formal Japanese gardens and military supply warehouses. “Like the brand itself, the store design is a utilitarian interpretation of various influences,” says Abruzzo, noting that traditional Japanese spaces (like gridded temple interiors) have a commonality with the economy of warehouses. “The store draws on the beauty in that gridded organization, in the service of modesty and functionalism.” 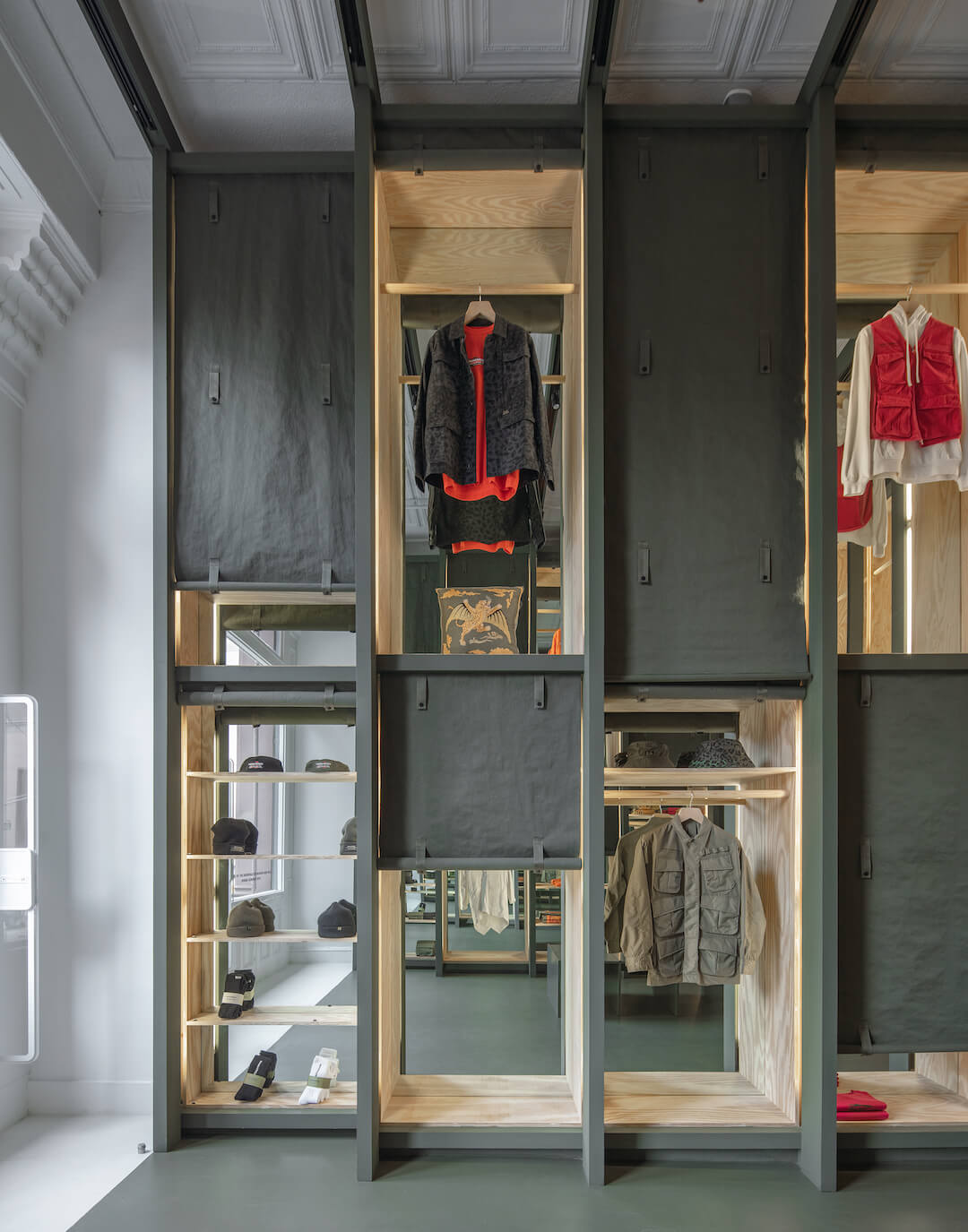 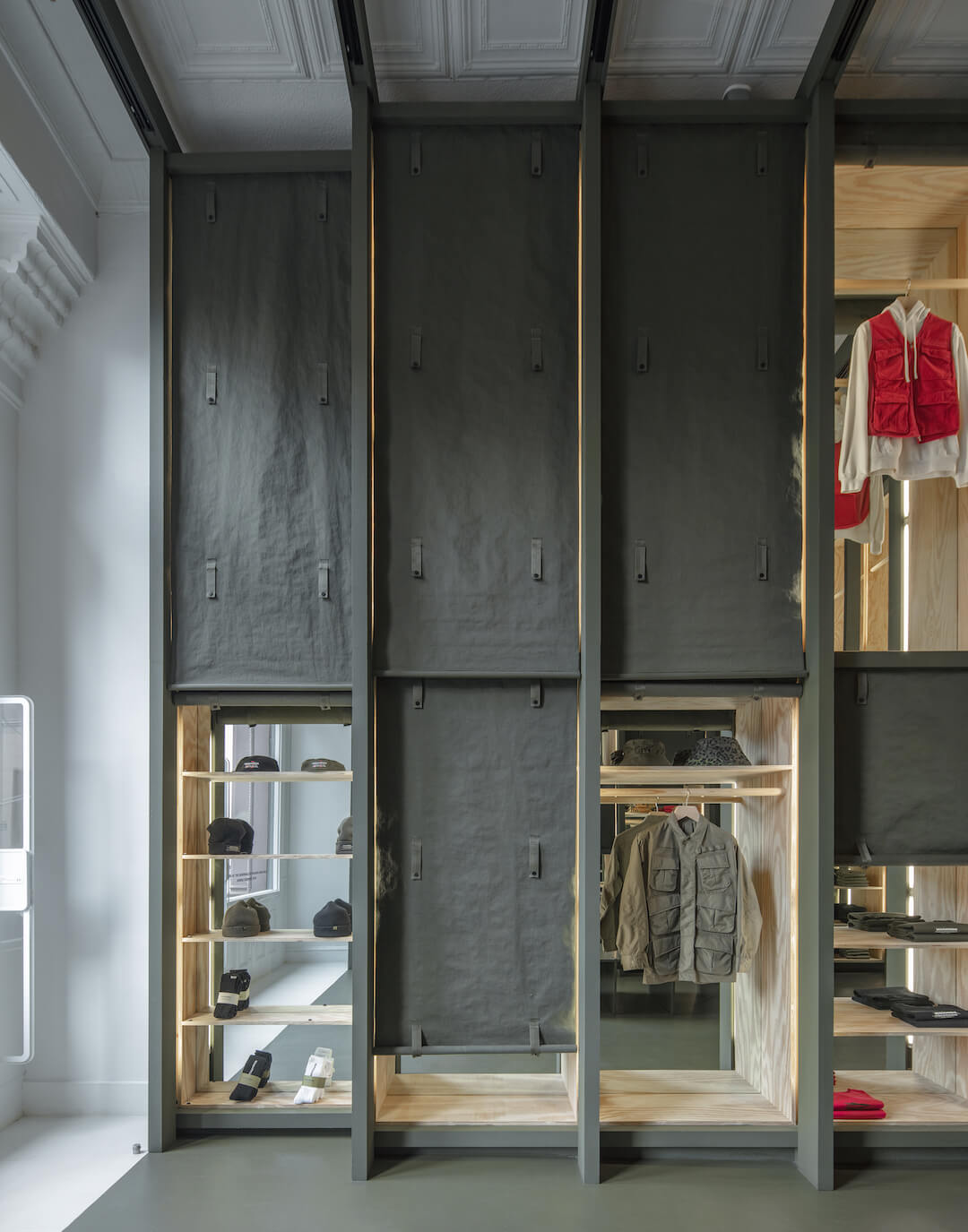 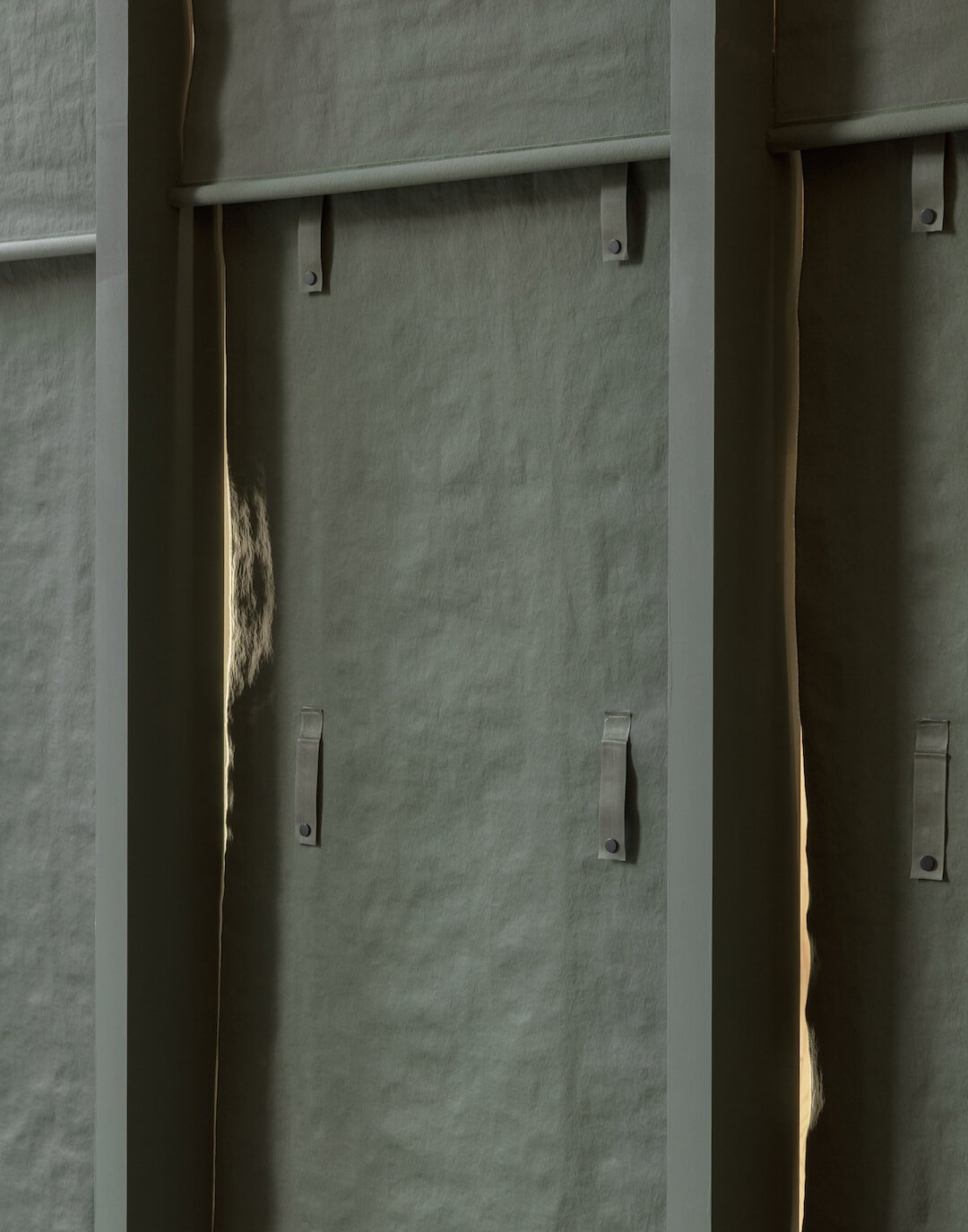 The existing tin ceiling and plaster walls were covered in crisp white paint to create a clean backdrop for the structure, and highlight the clothes it displays. While the new plywood was left raw and exposed, the engineered lumber frames and floor were painted army green to match the olive green waxed cotton curtain panels, provide by Maharishi, that are affixed to the fronts of the display boxes. (ABA worked with local paint shop Abbot Paint & Varnish to develop a custom colour that matched the curtains seamlessly.) To lend the system flexibility, the curtains were outfitted with a series of snaps and straps that allow them to be rolled up to reveal the full niche, partially unrolled to show off one or several shelves or unrolled fully to conceal contents when desired. 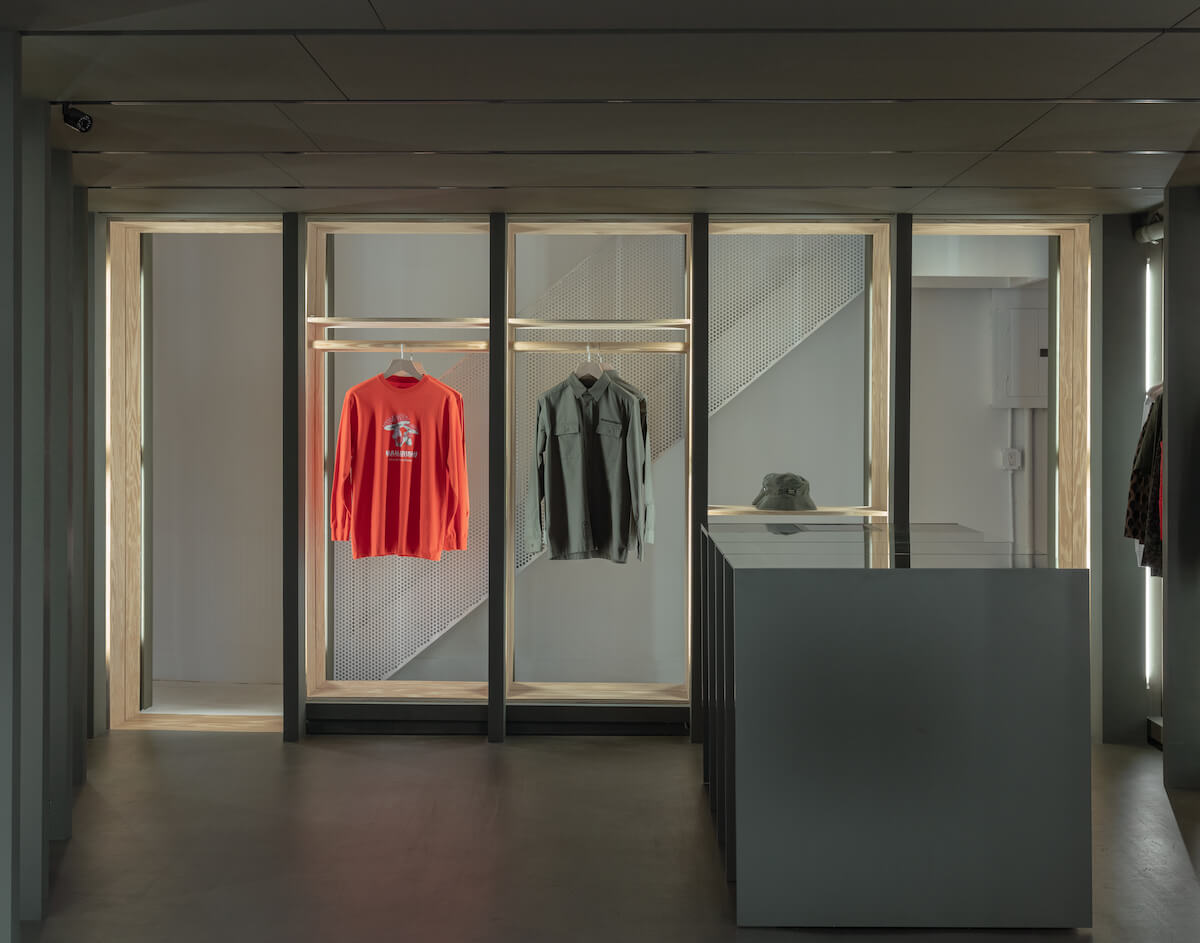 A major challenge for the firm was creating a lighting scheme: Each display niche has different configurations – some have multiple shelves, some a single clothes rod, and some a combination of rods and shelves. Working with lighting consultancy Dot Dash, ABA devised a system similar to those in grocery store freezers, with linear fluorescent fixtures by Jesco installed vertically up the front and back sides. The effect is gallery-like, with the diffused light bouncing off the mirrored backs in an ambient glow. Overhead, a ConTech Lighting track system further enhances the the niches. 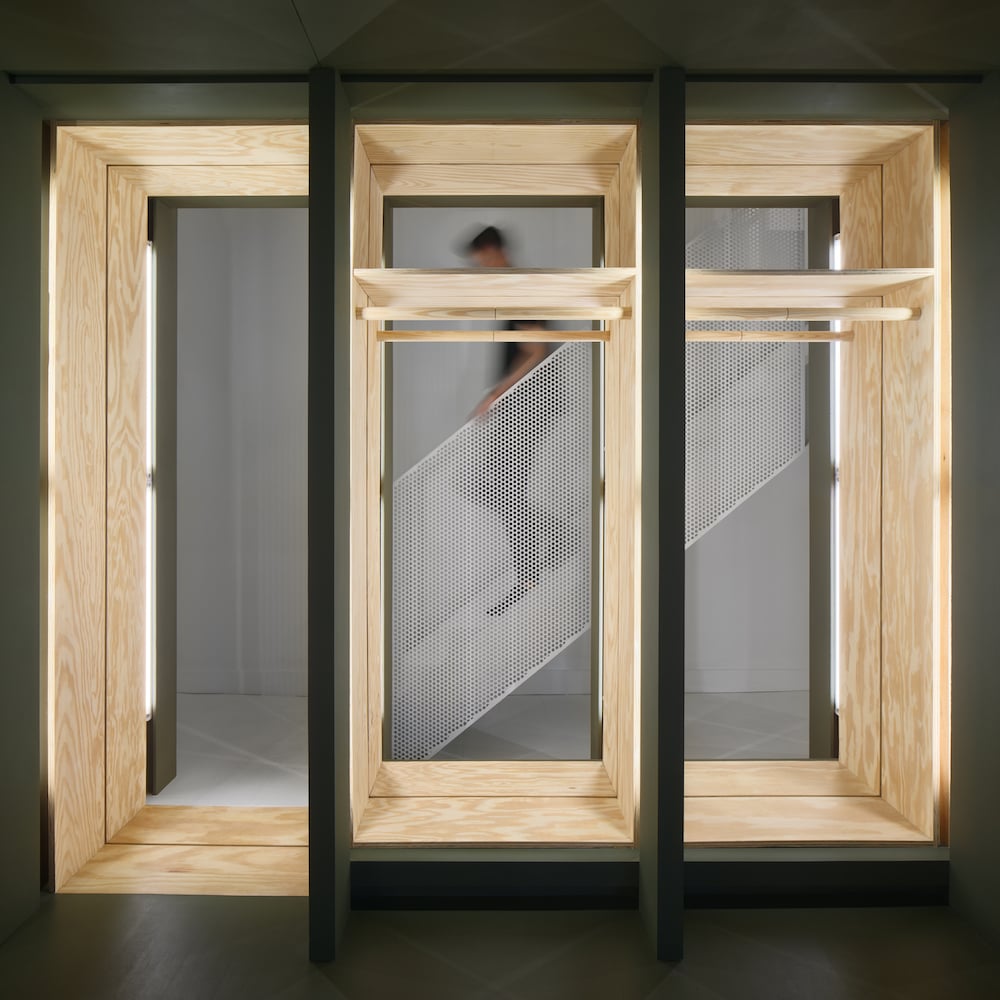 At the back, a custom-fabricated staircase made from white-painted plate steel and a perforated steel banister offers access to the upper level mezzanine, a continuation of the showroom. The upper edge of the mezzanine floor was made as thin as possible and does not extend fully to the staircase. “We wanted the stair to feel light, a bit like ascending the stair to an airplane, to heighten the experience of stepping on and off,” says Abruzzo. 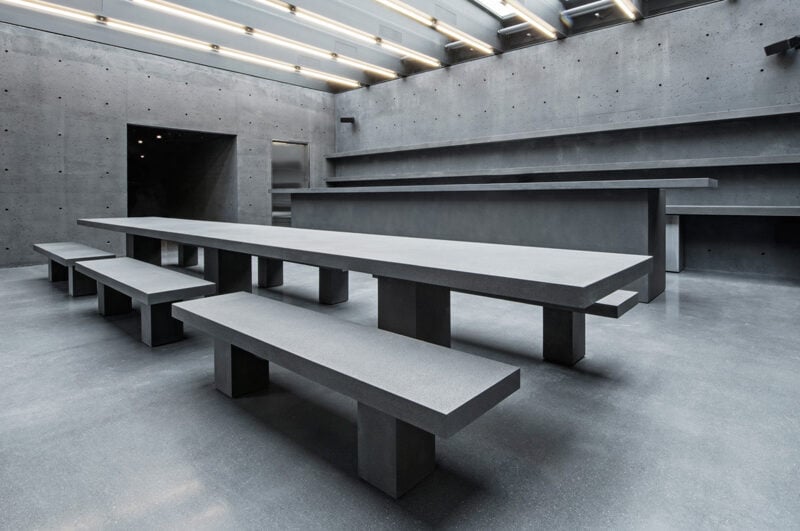 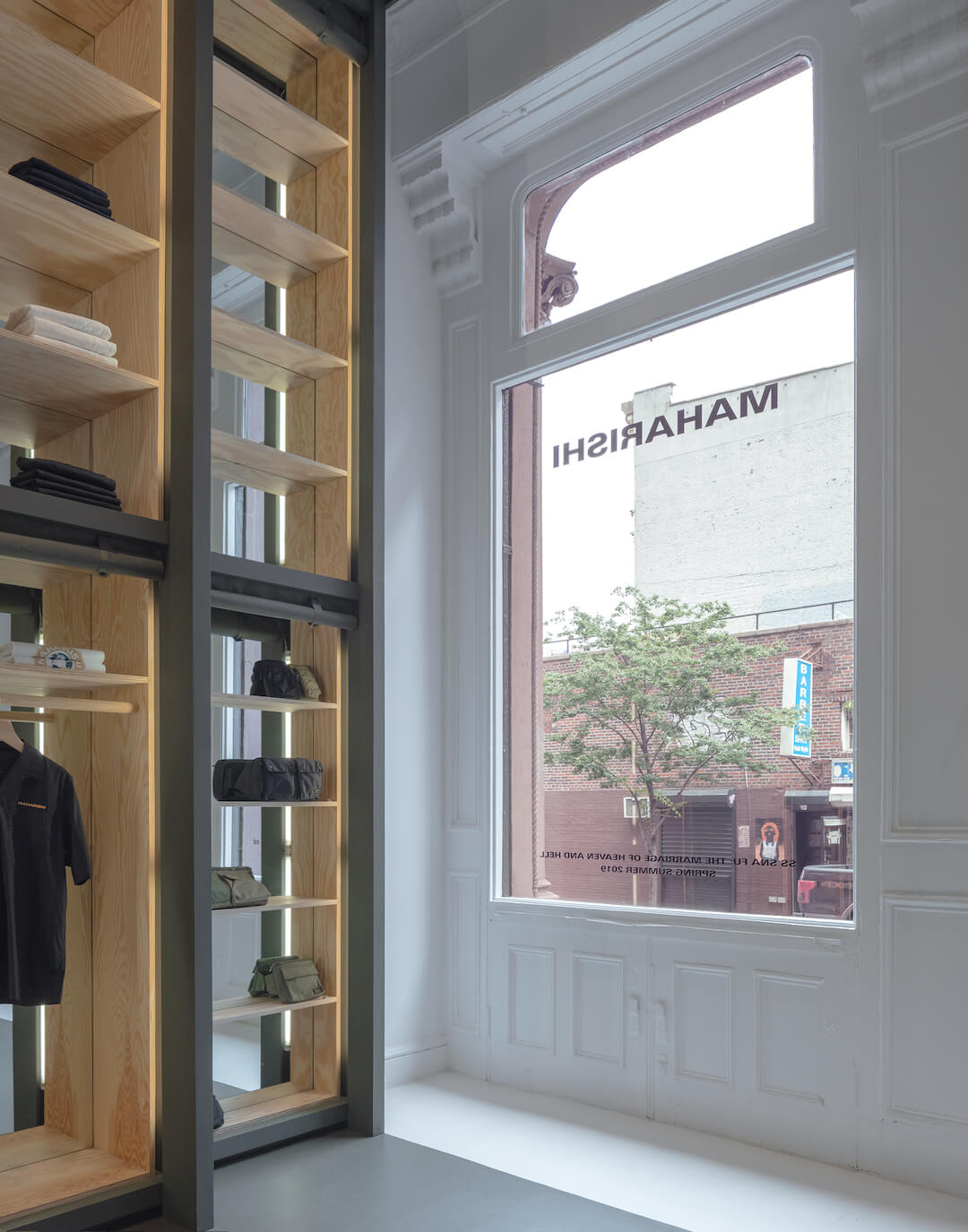 Set against those original ornate architectural elements, the new interior is a fitting embodiment of duality, one that manifests a seamless blend of east and west, nature and technology, camouflage and hi-vis. In other words, it’s signature Maharishi.