The Light-Filled Trudeau Foundation in Montreal
Montreal firm Atelier TAG puts shared space at the core of an expansive office for the non-profit organization that supports social justice. 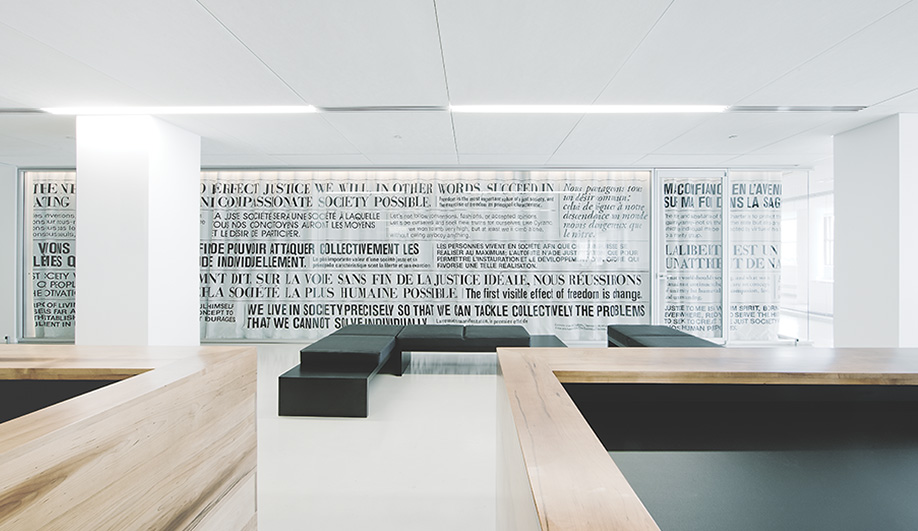 Opaque curtains hang across the conference room’s glass wall. They are printed with quotations from former prime minister Pierre Elliott Trudeau that articulate his vision for Canada. 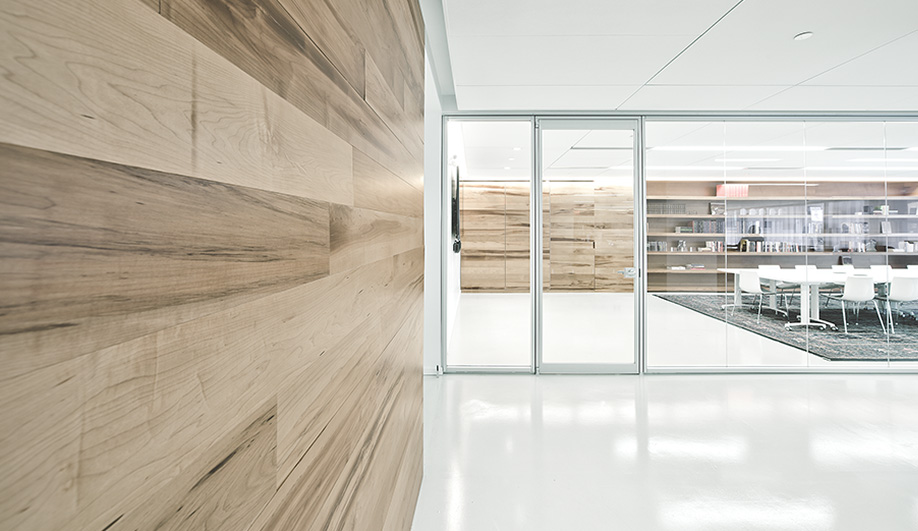 A central conference room and library is on view to the rest of the open-concept office. The large Persian rug was brought over from the organization’s old premises. 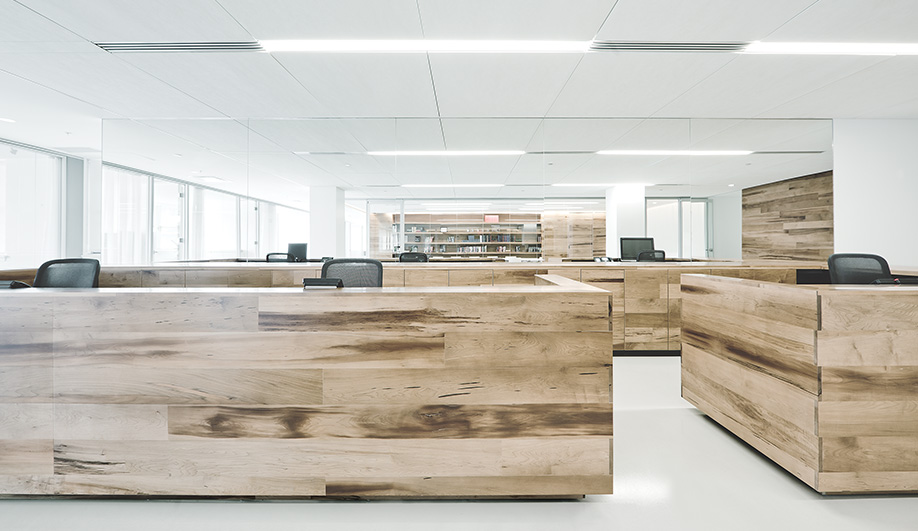 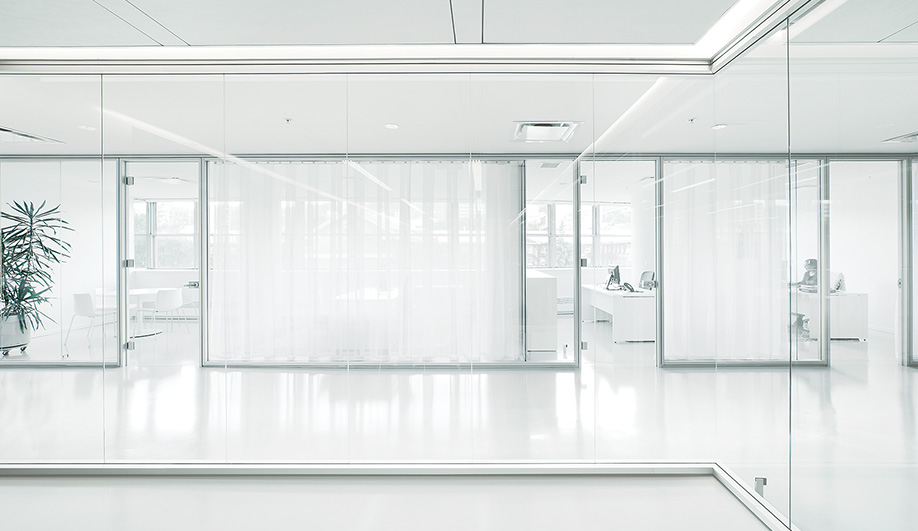 On the perimeter, glass-walled offices are lined with sheer curtains to let in ample natural light. 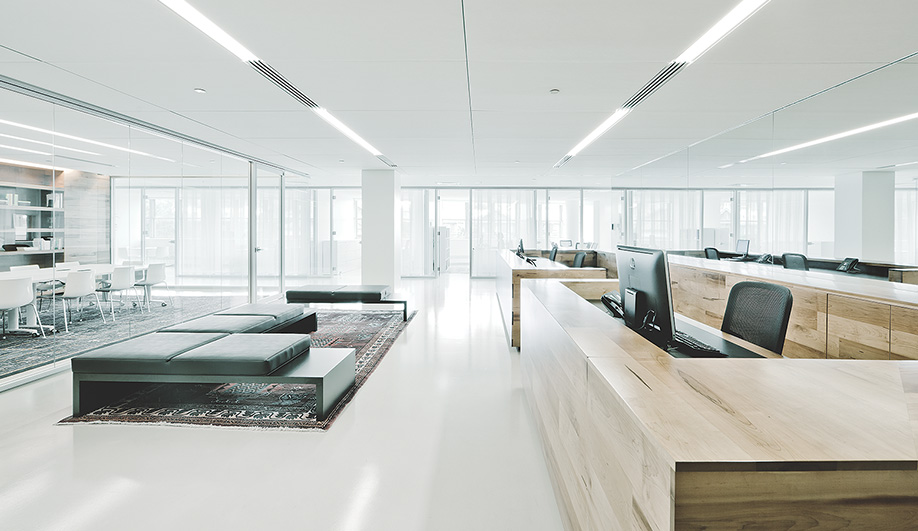 Montreal firm Atelier TAG puts shared space at the core of an expansive office for the non-profit organization that supports social justice.

For the new headquarters of the Pierre Elliott Trudeau Foundation, Atelier TAG of Montreal played with a sleek palette of white, wood and transparency. The offices on Montreal’s Sherbrooke Street West take up the sixth floor of an idiosyncratic tower. Built in 1953, it has a turquoise concave facade at the north end of the foundation’s new home. TAG took a surprisingly architectural approach to the interior design, placing a dozen individual offices along the main walls, with common areas at the centre, to reflect the foundation’s focus on improving communal life.

Atelier TAG is one of Canada’s go-to firms for cultural projects. Led by Manon Asselin and Katsuhiro Yamazaki, the studio has won a spate of competitions and prizes for theatres, libraries and museums. Since 1998, it has scooped up three Governor General’s Medals in Architecture, and it is currently building a major addition to the Musée des beaux-arts de Montréal, just blocks away. The foundation offices, which recently won one of Quebec’s Grands Prix du Design, display this well-honed attunement to contemporary public life: the space exhibits the thin precision and crisp detailing of a museum lobby. Still, the firm found it challenging to modify an existing building. “We’re used to competitions where there’s an openness and a freedom,” says Asselin.

To maintain the original raw, open feeling of the space, the architects decided to experiment. “The luminosity of that concave facade and the transparency toward the exterior were features that we wanted to highlight,” says Yamazaki. From the entrance, visitors are offered a clear view to the outside wall. The open plan reception area is anchored by broad maple-clad desks and storage cabinets. Privacy is preserved in all of the perimeter offices by glass partitions and translucent curtains. White ceiling panels and concrete floors help to spread natural light deep into the 632-square-metre floor plan.

The foundation, established in 2001 in memory of the former Canadian prime minister, is still relatively young. Its role is to oversee a program of doctoral scholarships, research awards and mentorships, as well as to host public conferences and lectures. The goal is to promote public intellectual life, especially in the discourse of social justice, an issue dear to Trudeau. He was also deeply connected to Canadian architecture. His brother, Charles, trained in the field at Harvard University, and Pierre was a friend and champion of modernist Arthur Erickson.

It is therefore fitting to see the organization that bears his name in a resolutely contemporary decor rather than ensconced in the oak-panelled rooms of the 1905 Golden Square Mile mansion where it all began. “It was challenging to transpose the staff’s way of inhabiting a Victorian house to an office building,” says Asselin. “They had to change their mindset from that cozy, intimate interior to this one.”

In the previous home, only the dining room gave a sense of community for the eight employees, who used it as a boardroom, a reception area and sometimes for luncheons and dinner events. In the new office, a dramatic glass-walled conference and lecture room puts communal space on display. A minimally detailed, 10-metre-long maple bookshelf shows off the manifold books published by the foundation’s community of writers. The room can be sealed off visually by drawing curtains printed with inspirational quotations from Trudeau – a visible way of surrounding the scholars and policy-makers who visit with reminders of the leader’s vision for his country.

It’s evident that the design delivers both vibrancy and calm. “Even the building’s owners recognize there’s something about the space that works,” says Yamazaki. “They always bring potential tenants to see it.” The architects add, however, that the spaces are meant to be open ended. Leaving room for the foundation’s programs to grow required some deft planning, orchestrating rooms and corridors between existing columns and punched-out windows. Behind the conference room, for instance, an expansive corridor that serves as an art gallery will eventually be filled with bespoke storage cabinets. “The staff seem to like it,” says Asselin, “and down the road we believe they will also appreciate the smaller refinements.” ­