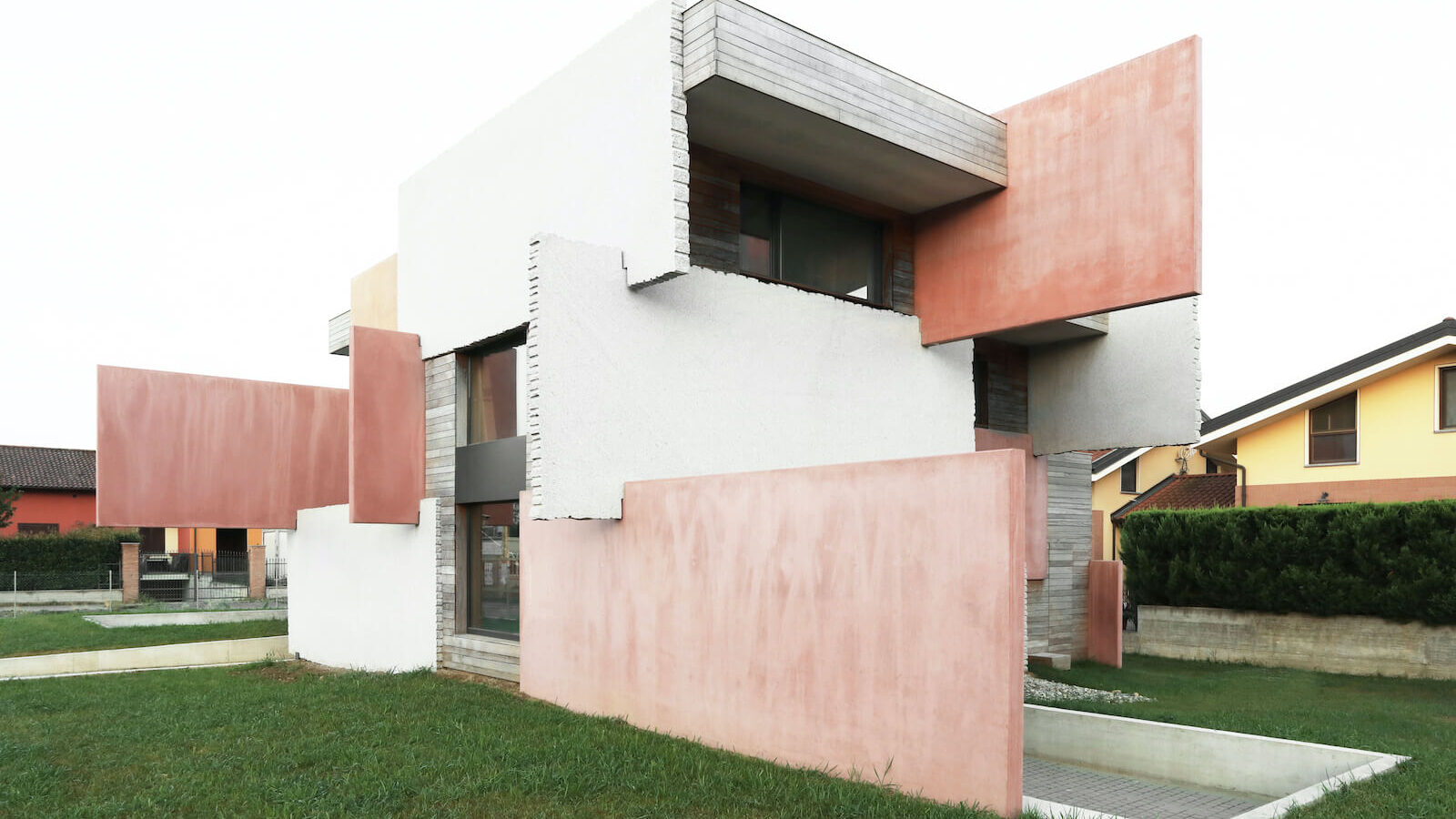 Turin’s Houses of Cards Push the Possibilities of Granite

Elastico Farm reimagines the Italian stone as a building block for a pair of radical new homes in Italy.

One of the first questions that comes to mind when you see Houses of Cards, a pair of dwellings designed by Elastico Farm in a suburb of Turin, is: Who are these daring clients? Stefano Pujatti, a principal at the firm, explains that he was commissioned by a doctor to design the homes for his two daughters who live in Torrazza Piemonte, an enclave of cookie-cutter houses. Pujatti recalls, “I told them, ‘If you trust me, I’ll do it.’ They said, ‘We trust you, so show us what you’ll do.’ They were enthusiastic from the very first moment.” He then began playing with a set of business cards, cutting slits in them to stack and arrange them into enclosures, and wondering if the houses could be a testing ground for new ideas on how to use granite slabs.

The concept was partially inspired by another of the firm’s undertakings that had begun in 2013, two years before the doctor approached Pujatti. They’d been working with a quarry in Olbia, Sardinia. “They asked us to invent a new way of using granite,” says Pujatti. Typically applied in stairways and flooring in institutional projects (as well as for tombstones), the material is thick and porous and resists humidity – all great qualities but ones that still failed to convince most Italians to use it as a main component of their homes.

A reinvention was in order. The firm sought ways to translate the material into a load-bearing wall that also bore unique expressive qualities. Their research showed that the very method with which granite slabs are extracted from the quarry by wire allows for precise and compact measurements; the optimal slab would measure 600 cm by 240 cm with a variable thickness (depending on structural needs) from 12 cm to 20 cm. Using a system of cuts and metal dowels to connect them, the slabs could be arranged as structural panels. European Union regulations, however, would not allow a building to be erected from granite alone; Pujatti explains that the approvals process would have taken forever.

Instead, for Houses of Cards the firm decided to complement the granite panels with coloured concrete ones (wood siding is also used). The hues that they chose for the concrete was a way to reflect the sisters’ heritage: their mother is from India and they love the vibrant colours that her country is known for. While both houses are 200 square metres, the Cat House (named for the sister who loves felines) is orthogonal in form and the Dog House (named for the dog-loving sibling) is radial. What Elastico Farm found was that the orthogonal house required transversal metal bracing to withstand seismic forces; they designed the radial form as a response – its very shape makes it earthquake proof, allowing them to eschew extra bracing. Inside the homes, the panels become part of the living space, both a material finish and a furnishing. “It’s something more than just a wall. It decorates the house with its own structure,” Pujatti says.

Meanwhile, the firm continued its research into granite slabs as self-supporting panels using the residential project as a sort of guinea pig. They are about to complete a winery and a research centre where they maximized the size of the interconnecting sheets: the Livio Felluga Winery in Brazzano di Cormons, Gorizia, and Turin’s INFN National Institute of Nuclear Physics, also called S-LAB, a pun combining its purpose and the material that gives its building its character.

“Houses are for us a good place to start our experimentation,” says Pujatti, whose other projects include Stoned House and Maison Glacé, the latter an unrealized concept that the firm is looking to translate into a school on Canada’s Manitoulin Island. “A lot of things learned on the way can be used for future projects. It’s always worth trying to go off the main road.”

As for Houses of Cards, which transports a reimagined material from Sardinia to an anodyne suburb in Turin, he says, “Archeologists in the future will see these huge slabs and wonder how they got there.”

Elastico Farm reimagines the Italian stone as a building block for a pair of radical new homes in Italy.