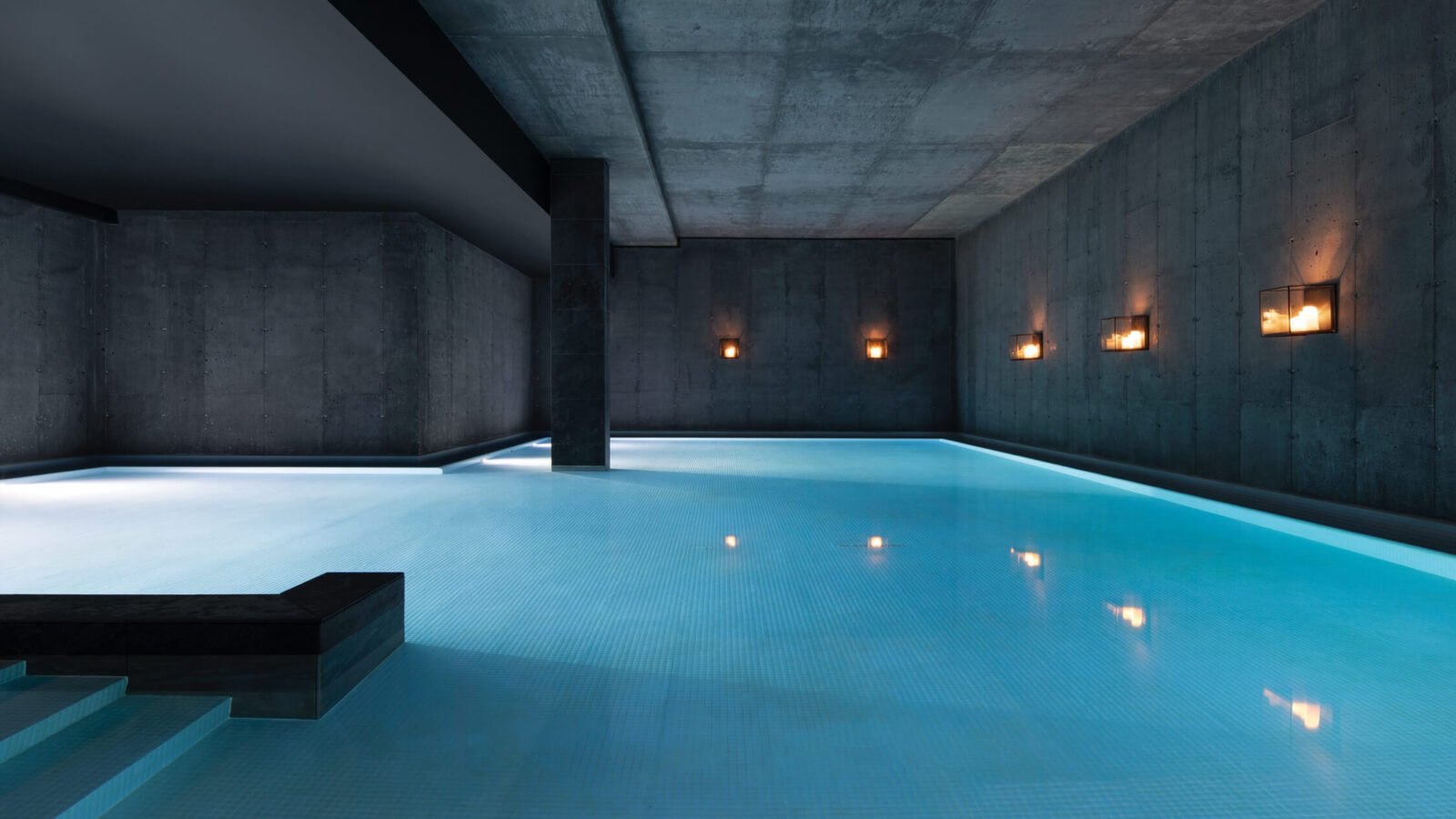 As February 14 approaches, these spas, pools and saunas were designed for relaxing with a significant other or flying solo.

In the famous words of Tina Turner: What’s love got to do, got to do with it? With Valentine’s Day fast approaching, the answer appears to be: everything. And while you may be rushing to make reservations at the hottest restaurant or find the Hallmark card that exactly describes your innermost feelings of affection, maybe a more relaxed approach is in order?

Whether you’re spending February 14 with a significant other or flying solo, these high-designed spas, pools and saunas are perfectly suited for some serious self-care.

These vast and varied programs are fragmented into a series of buildings, basins and terraces that result in “different thermal zones, each developed to offer unique sensory universes,” according to the studio.

Outside, designed waterfalls fill soaking pools interspersed throughout the stepped volumes alongside the largest flotation bath in North America. “The simplicity of the volume’s layout makes them blend in as part of the horizontal landscape,” add the studio of their contextual approach.

Like the exterior, which references the hues of Quebec’s landscape with glass, stone and steel, exposed concrete walls in the subterranean pools envelope visitors in an extension of the local terrain. Crisp blue waters accented by integrated lightning and flickering candles suggest a continuation of the frozen waters of the river beyond. And, if all this relaxing has you a bit peckish, the structure also boasts a 70-seat bistro with breathtaking views of the pulsing river.

The second location of Portland-based hotel chain Society Hotels, this outpost in the rural community of Bingen, Washington, is a refined, sculptural complex courtesy of Oregon studio Waechter Architecture.

In addition to renovating an existing 1930s school house, Ben Waechter and his team crafted a new structure on the former playing fields that consists of a ring of 24 cabins around a faceted pavilion that houses the hotel’s spa programs.

“Within the ring, a community spa building serves as a central gathering space with shared amenities for the hotel’s visitors,” explains the studio. “The spa maintains a similar material palette to the surrounding cabins, yet has a distinctly volumetric form.”

At the centre of the spa building, an expansive skylight “washes light over a series of pools below.” A juice bar, kitchen, therapy rooms, changing rooms and sauna form the perimeter of the open-air pavilion (folding doors allow the structure to close off during colder months) interspersed with additional outdoor patios and a soaking pool.

Water features heavily in Mexico City-based Sordo Madaleno Arquitectos’ latest hospitality project: the Solaz Los Cabos hotel. Gracefully set on a nine-acre site along the shores of the Pacific Ocean in Baja California, it integrates water within a number of public programs, such as the restaurants, Erizo and Maki, that feature swim-up dining spaces on their expansive outdoor patios.

Just as the dedicated spa facility faces the ocean and contains multiple soaking pools as well as treatment rooms, a strong connection to water continues throughout the remaining areas of the project.

Shallow reflecting pools flow in and out of a number of surrounding spaces, including the striking open-air lobby and bar. A central pond even anchors the outdoor sections of the site. Infinity pools line the beach-front property (replete with cabanas) while the ocean’s waters crash against the shore only steps away.

Finally, at the entrances to each individual hotel room on the ground floor, visitors must cross a shallow pond before entering their designated dwelling. Further inside, pools wrap the perimeter of each terrace, perfect for an intimate soak with your significant other.

As February 14 approaches, these spas, pools and saunas were designed for relaxing with a significant other or flying solo.