3 Brilliant Interiors Up For Awards
These standout projects - by emerging Asian firms Neri & Hu, Asylum Creative and a21studio - made the shortlist in the World Festival of Interiors, which announces the nine winners at the Inside Festival in October. 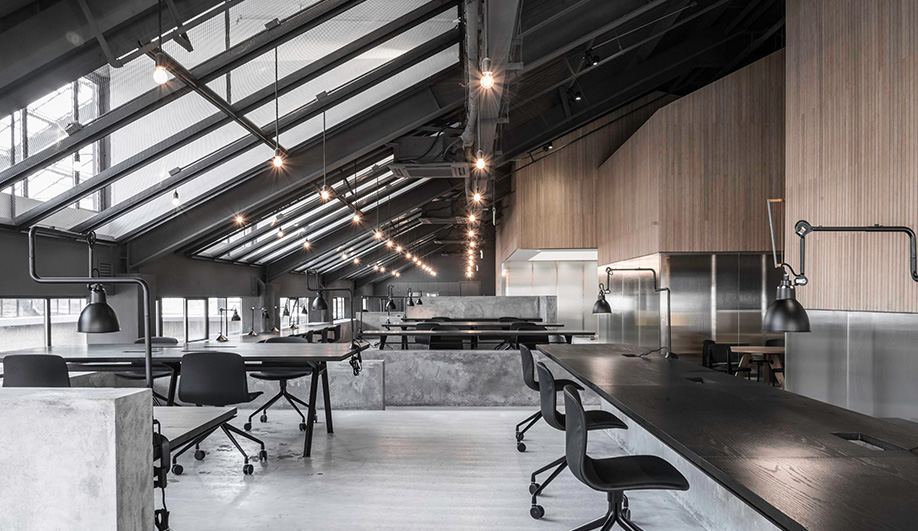 These standout projects – by Asian firms Neri & Hu, Asylum Creative and a21studio – made the shortlist in the World Festival of Interiors, which announces the nine winners at the Inside Festival in October.

With a huge, star-studded jury – including Benedetta Tagliabue, Clive Wilkinson, Jason Bruges and Jeanne Gang – and entries pouring in from around the world, the World Festival of Interiors competition is a pretty thorough source for determining the state of interior design today. It culminates in the Inside Festival, taking place at the Marina Bay Sands in Singapore in the fall, when the winners will be revealed.

The shortlist of 61 fills up nine categories, ranging from bars and restaurants to healthcare settings and residential interiors. Nominees include Cultura Bookstore in São Paulo, Brazil, by Studio MK27; and Auriga in Mumbai, India, by Sanjay Pury Architects – both of which are also 2014 AZ Awards meet the finalists. And half of the shortlisted projects are by Asian firms. Here we look at three standout spaces by Chinese, Singaporean and Vietnamese studios. 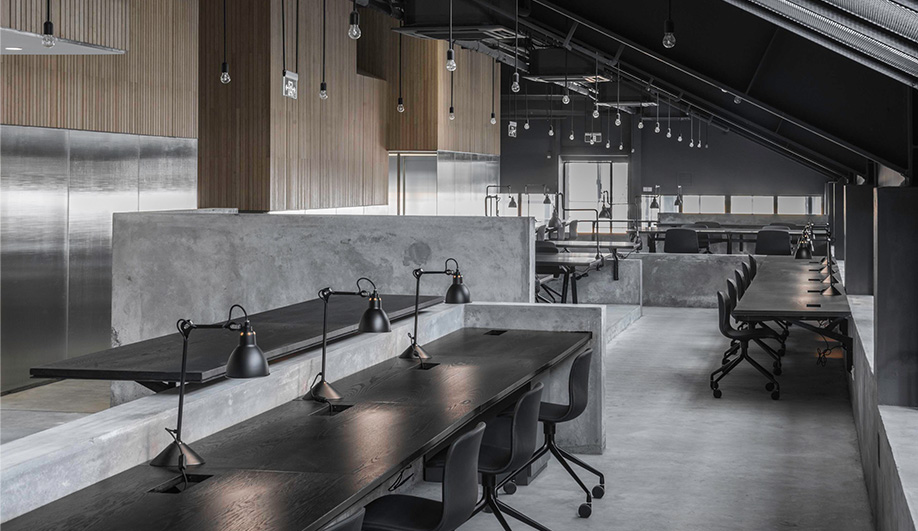 1 Flamingo Office by Neri & Hu
Lyndon Neri and Rossana Hu applied their signature raw industrial aesthetic to the Shanghai offices for branding consultancy firm Flamingo, one of the finalists in WAF’s Office category. A-frames were constructed onto the flat roof of an existing building for the loft-like, 620-square-metre space: “The insertion of house-like volumes into a landscape of concrete platforms breaks down the homogenous space,” the firm explains, “such that the roof is not just a singular element, but can be experienced on multiple levels, from various vantage points and on various scales.”

Concrete partitions staggered throughout define walkways and separate work stations with dark wooden desks. To lighten the space, walls are clad in whitewashed bamboo, and fixtures from Michael Anastassiades, Lampe Gras, Wastberg illuminate the space. The office also houses a boardroom, work pods, breakout areas, research rooms, a library and a kitchen, all of which are housed in the pitched-roof structures; plus, a mezzanine level contains windows overlooking the rooms below. The firm also received two other WAF nominations, including best retail for their Camper Showroom and Office, and Design Republic Design Commune – both also in Shanghai, and has been selected to create the main installation, Das Haus, at next year’s IMM Cologne. 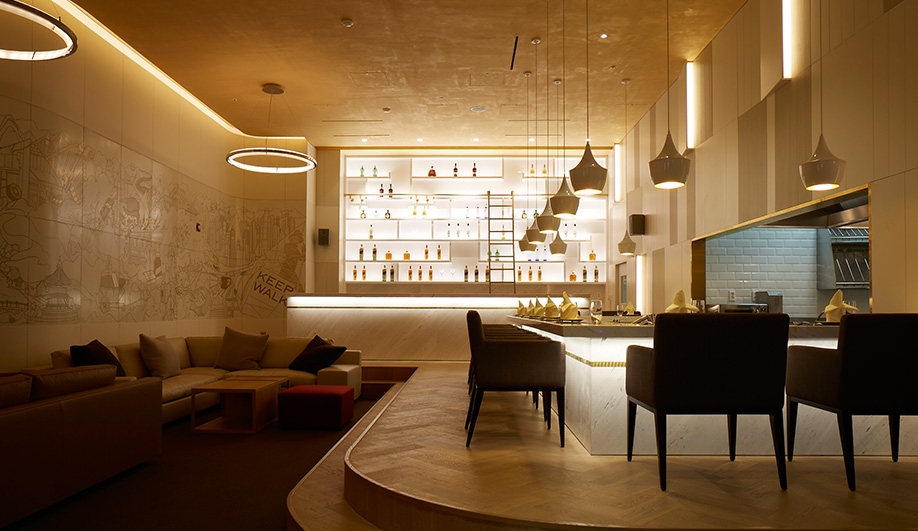 2 Johnnie Walker House by Asylum Creative
One of the seven nominations in the Bar & Restaurant category, this interior in the trendy Cheongdam neighbourhood of Seoul was designed by Singapore studio Asylum Creative to house a private members club for the Johnnie Walker brand. Hosting bespoke whiskey experiences, the six-storey, 1,500-square-metre house contains a rooftop space; a VIP lounge (pictured); a suite where members can devise their own signature blend of Johnnie Walker; an event space with LED-lit screens to adjust the mood; and a training school for up-and-coming bartenders.

The finishes are what make this space special. Hallways are lined with peat, a vital element in whiskey-making, and materials such as platinum and oak are used throughout the neutral space. Asylum Creative brought in local artists to create several pieces; Byoungho Kim made a dramatic installation of copper droplets to imitate whiskey dripping from a cask. Surrounded by a spiral staircase, the glimmering fixture hangs from the ceiling of the house and cascades to the bottom floor. 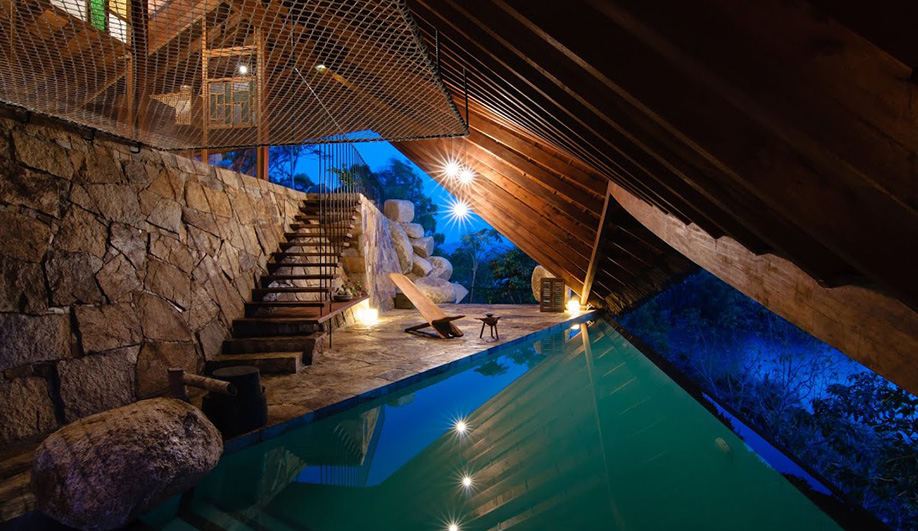 3 The Tent by a21studio
Emerging Vietnamese firm a21 studio is nominated in two categories: Civic, Culture & Transport and Hotel. In the latter, its shortlisted spa project on a rocky hill in Nha Trang, Vietnam, is defined by a sharply angled roof to combat the intense sunlight and rain, and provide a partial covering for the idyllic mineral springs below. Extending from a rock, the roof acts as a structural wall, while allowing the building to blend into the surrounding landscape, and reaches out over the springs to open up into the lush landscape.

The interior, which sits on two levels, places the bedroom on the second floor to overlook the spring; this space is capped with colourful glass walls, the panes upcycled from surrounding buildings and is connected to a small dining area on the rocks. Wooden beams and panels are wrapped in a waterproof layer of coconut leaves (an indigenous building technique), further camouflaging the structure within the forested area. Other local materials are also used, including dry-stacked stones quarried on-site for the flooring.