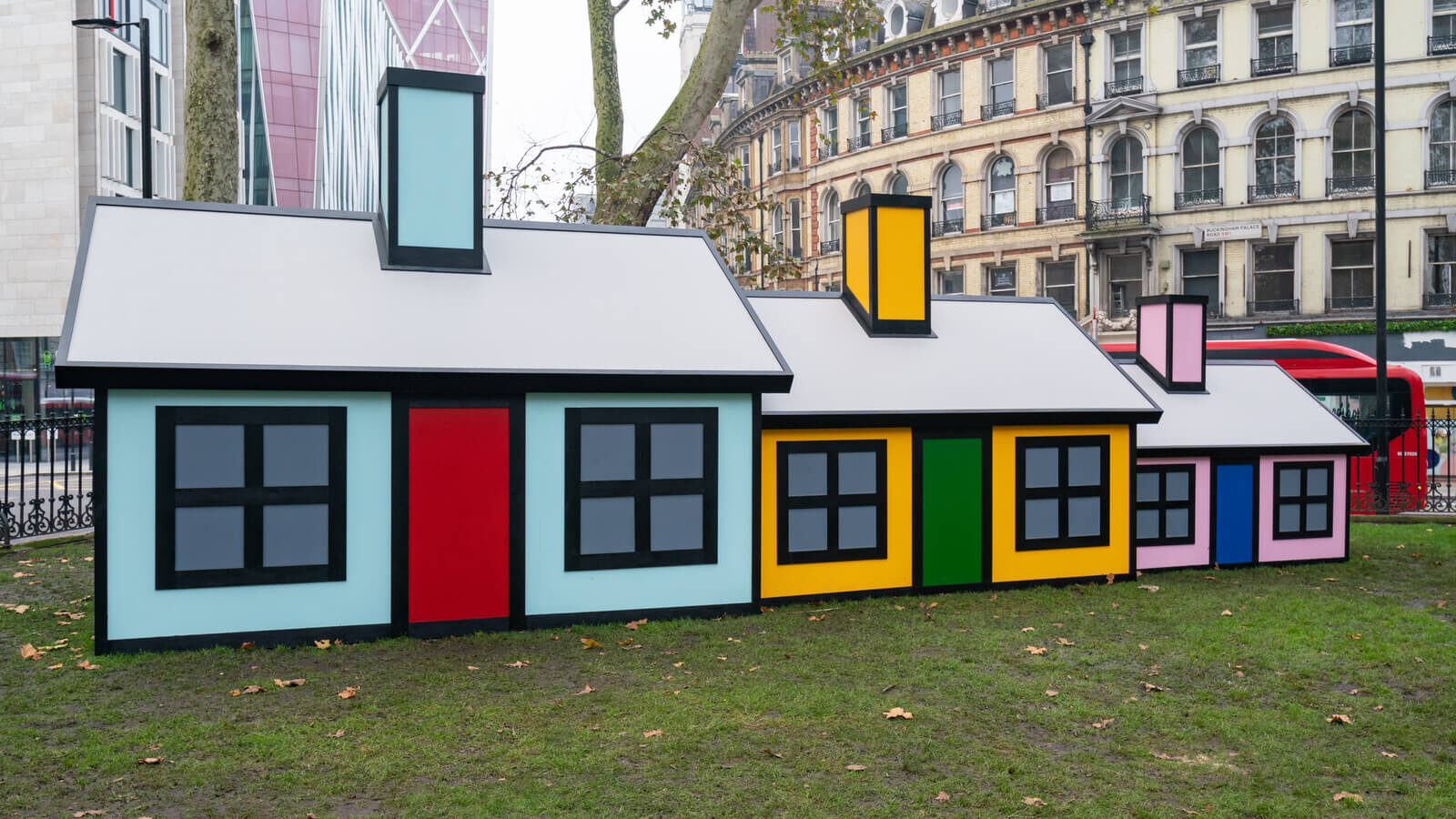 In a city hit hard by the COVID-19 pandemic, Alter-Projects curates an outdoor trail of bold new public art to provide a much needed sense of community and connection.

“At a time when sentiment is low, art and design have the power to lift people’s spirits,” says Anne-Laure Pingreoun, founder of London-based Alter-Projects. “Art can transport and take the mind on a journey.” Putting this philosophy to work, Pingreoun and her multidisciplinary curatorial agency tapped a dozen leading artists and designers to produce bold “site-specific sculptures, installations and murals” for London’s core as part of the sprawling exhibition Wander Art: a project in the city’s Mayfair and Belgravia neighbourhoods described as the “largest outdoor gallery” in the U.K. metropolis.

Together, these new commissions by likes of Yinka Illori, Jordan Söderberg Mills, Fernando Laposse and more look to enliven an urban centre hit particularly hard by the COVID-19 pandemic while providing residents with a “comforting, joyful and soothing” experience. 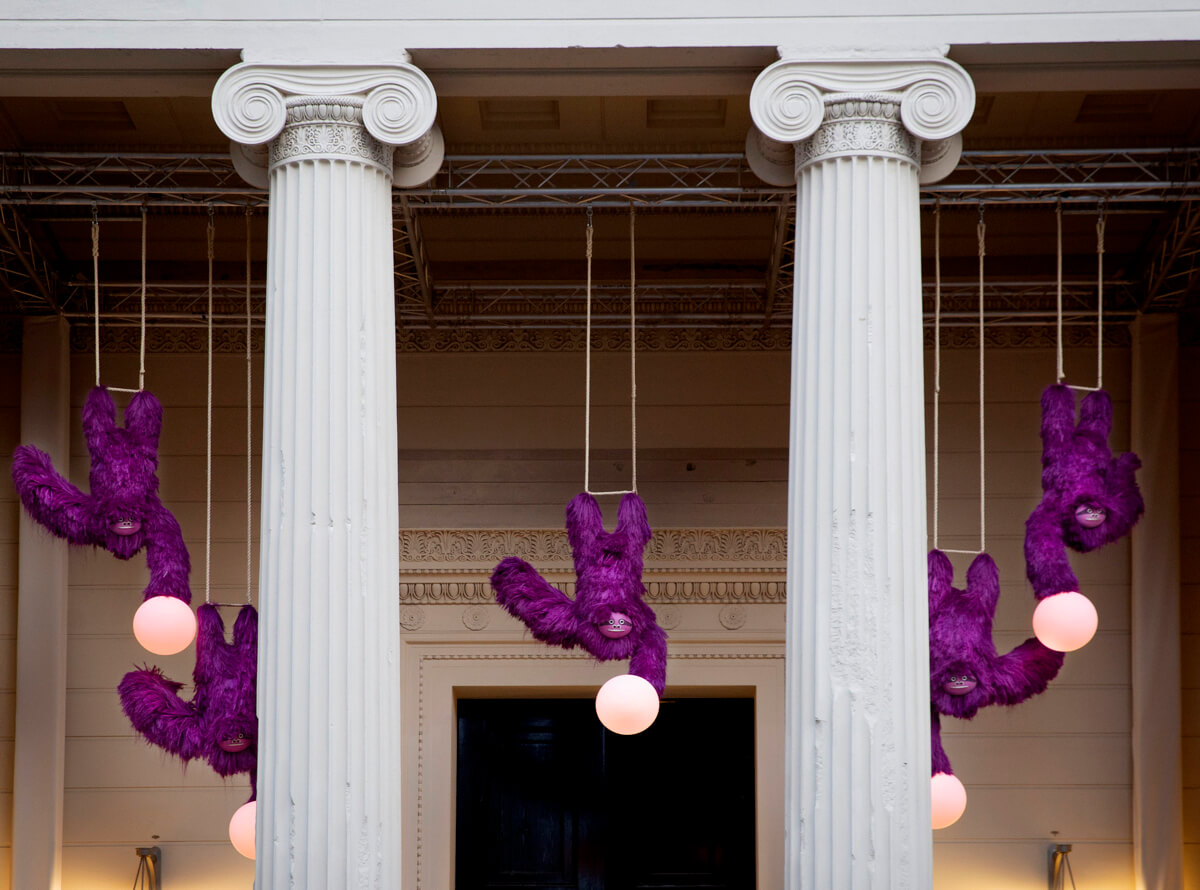 To match each enclave and its distinct identity, Alter-Projects conceived of two unique themes that drove the selection of artists and the respective works produced. In the Hyde Park-adjacent Mayfair, for instance, the curators framed the multi-site showcase around the idea of an “Urban Jungle,” adding yet another layer of graphic interventions to the area’s historic fabric. 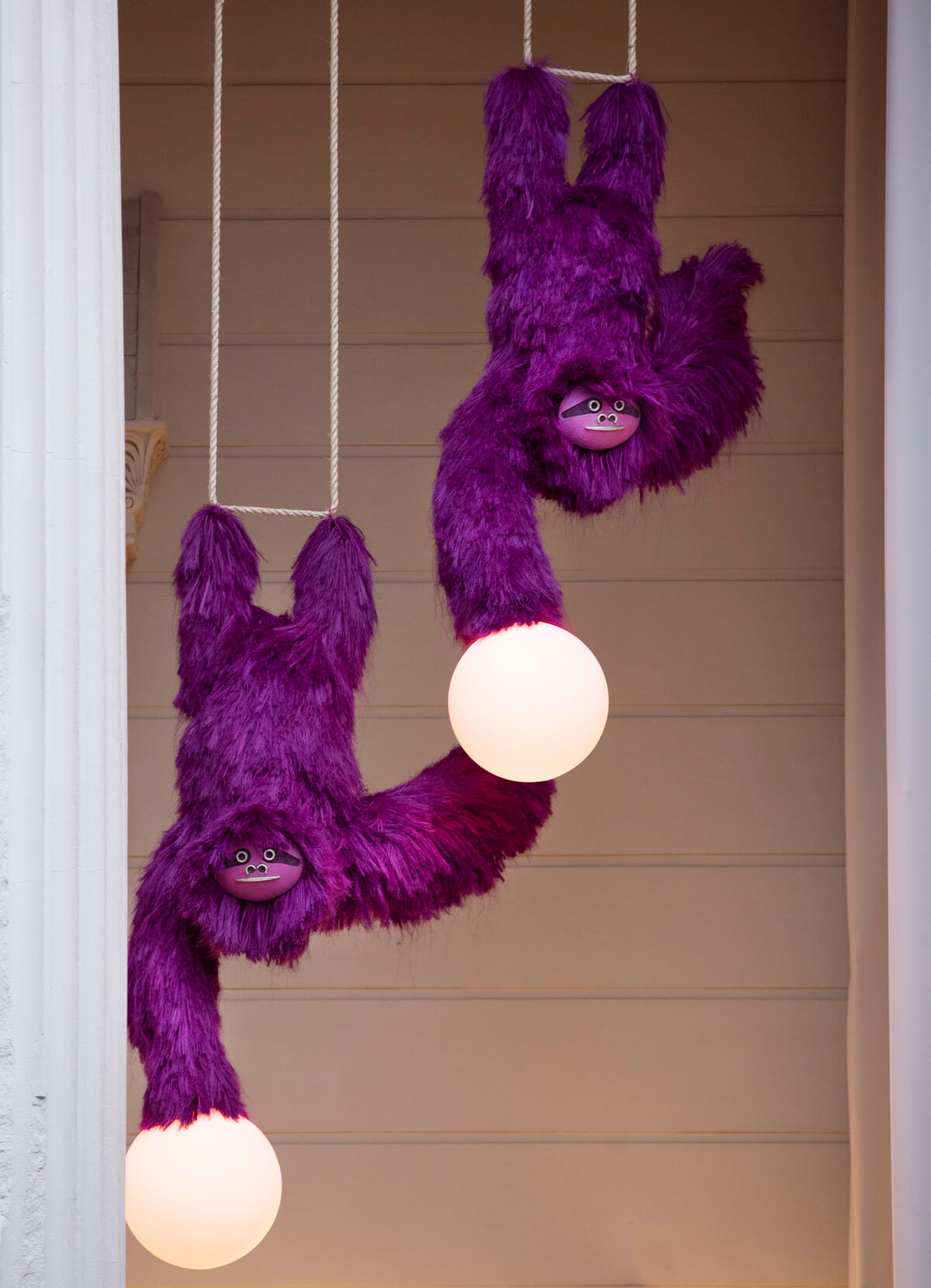 Among the cohort of creatives selected for Mayfair include Mexican designer Fernando Laposse, whose work Wild Lights consists of five electric-purple sloths suspended between the Corinthian columns adorning the neoclassical facade of the popular Mercato Mayfair market. Each furry mammal cradles a globe in its palm, creating an intimate array of soft illumination in the evening. 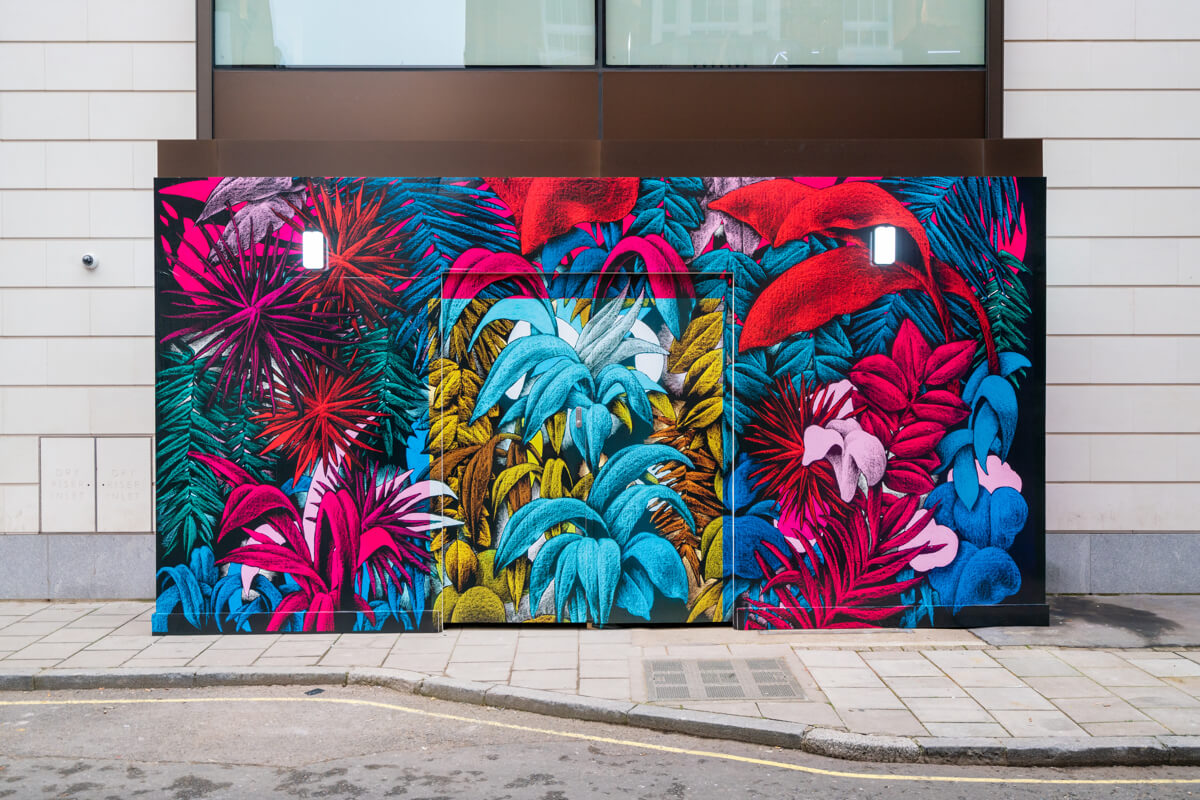 Though better known for his high-profile collaborations with brands including Chanel and Cartier, Paris’ Julien Colombier adapted his experimental paintings — replete with technicolour flora — into a richly animated surface adoring a storefront on Balderton street. Local illustrator and printmaker Margaux Carpentier, meanwhile, translated her bold and symbolic imagery into the monumental portrait-cum-sculpture Watching You Grow, now occupying a prominent spot in the Brown Hart Gardens. 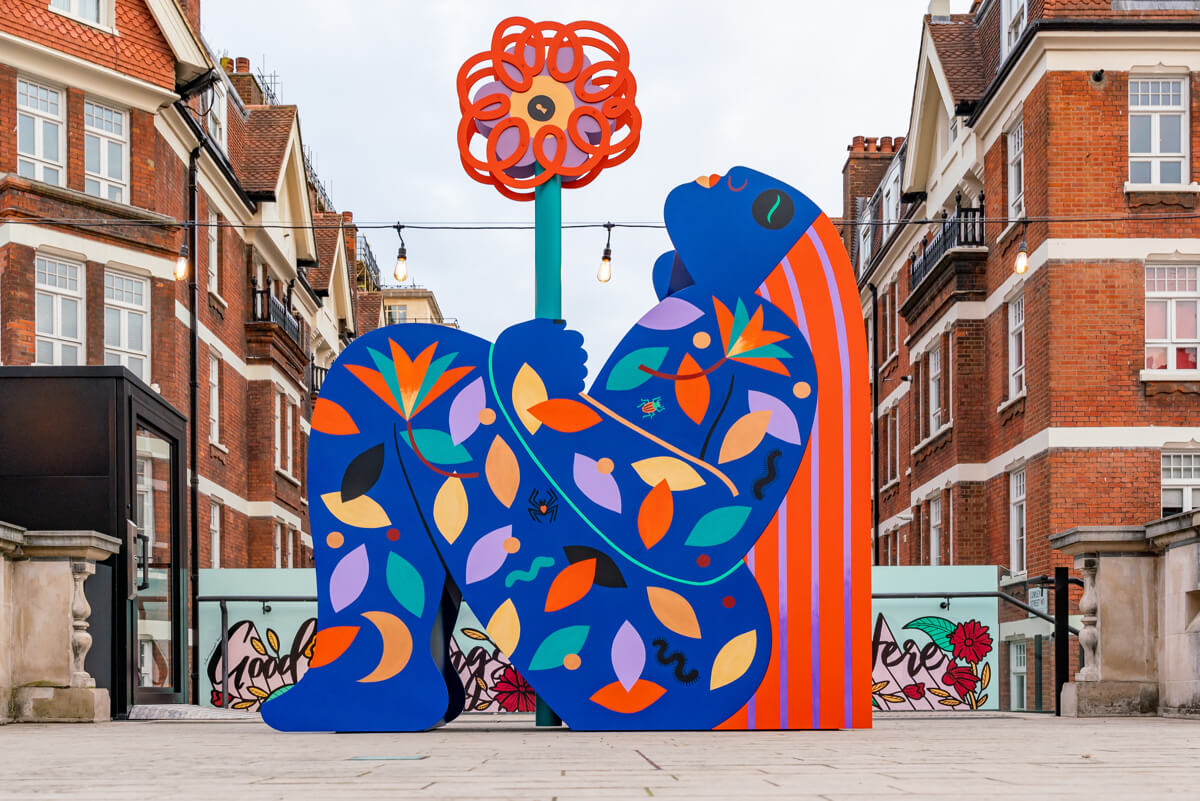 “I wanted to create a shrine for the plants,” says the acclaimed British-Nigerian designer, “to promote health and well-being among Londoners.” Its stacked composition also doubles as amphitheatre seating for a moment of pause. “This space will also emphasize the sacredness of nature and plants,” he adds, “and the importance of taking care of them.” 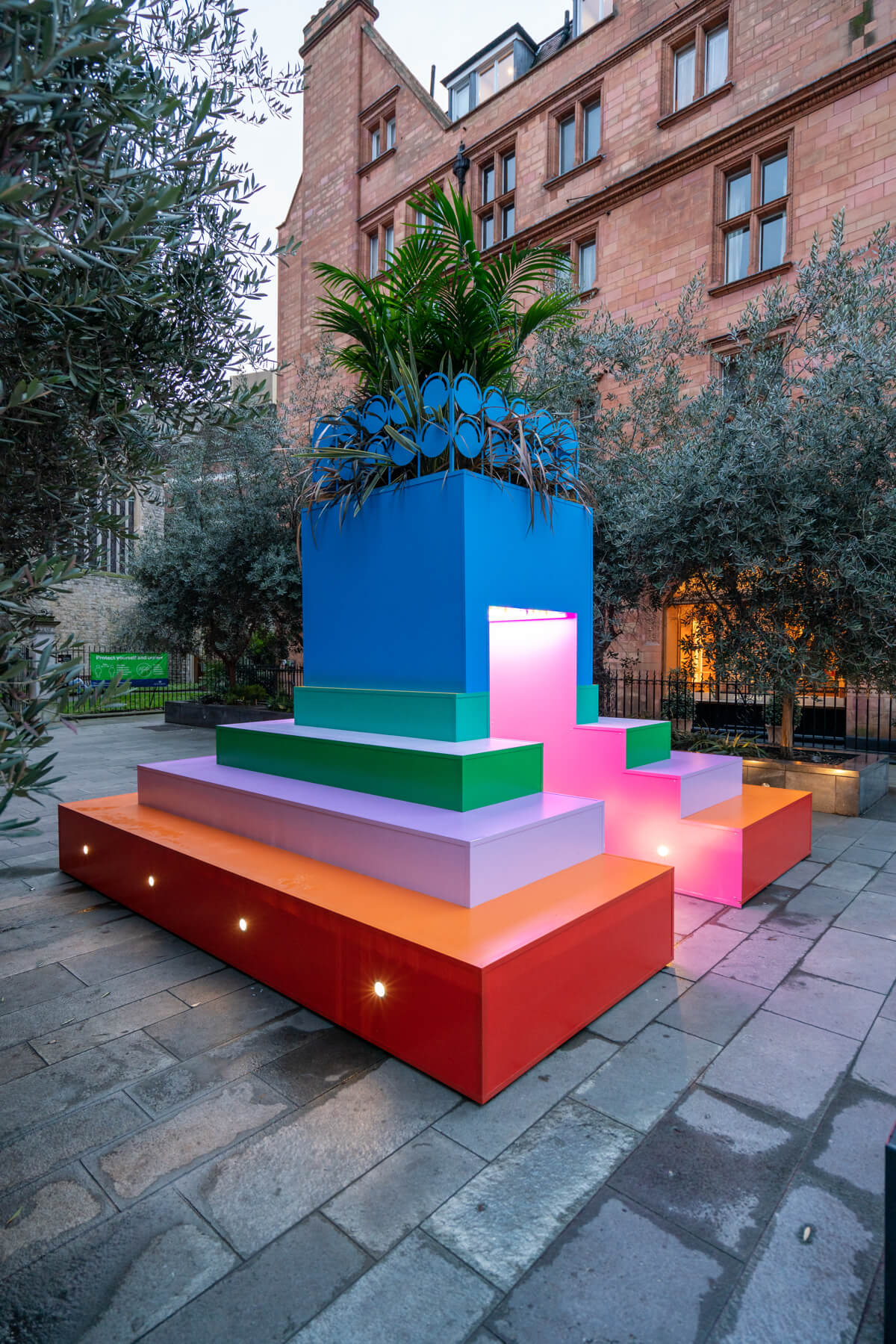 Immediately south of Mayfair, the seven installations peppered through Belgravia orbit around the “Pop Metropolis,” a theme concerned with “changing urban perceptions” and an “exploration of the unexpected,” according to the curators. 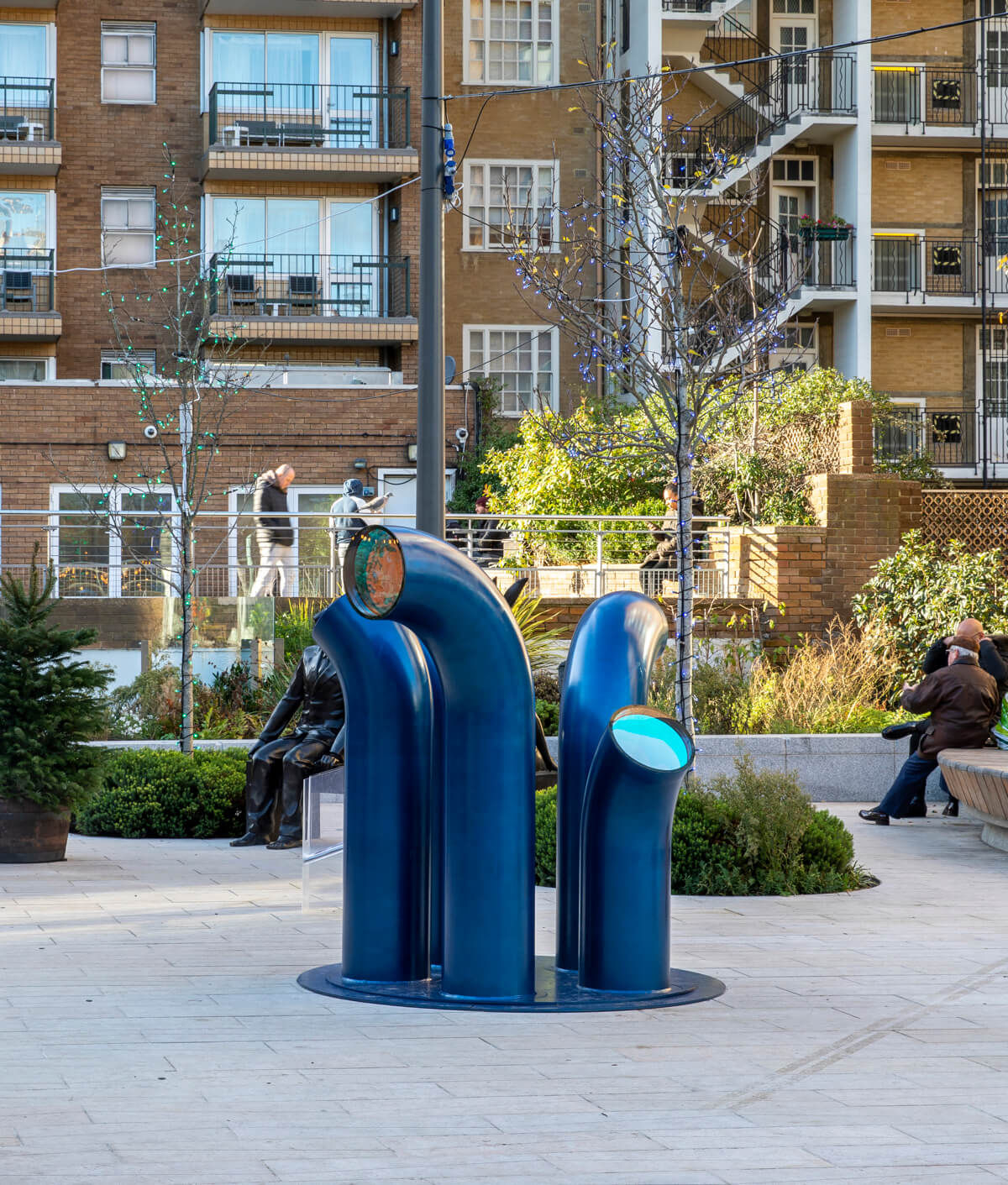 Nowhere is this intention of shifting how the city is understood more apparent than in Berlin-based Jordan Söderberg Mills’ The Five Fields. Situated within the Halkin Arcade, the Canada-born artist’s work features five of his chromatic mirrored surfaces, each housed within its own slouching metallic tube. It’s an “architectural folly” that draws allusions to the area’s industrial past as well as its long history as a crossroads. 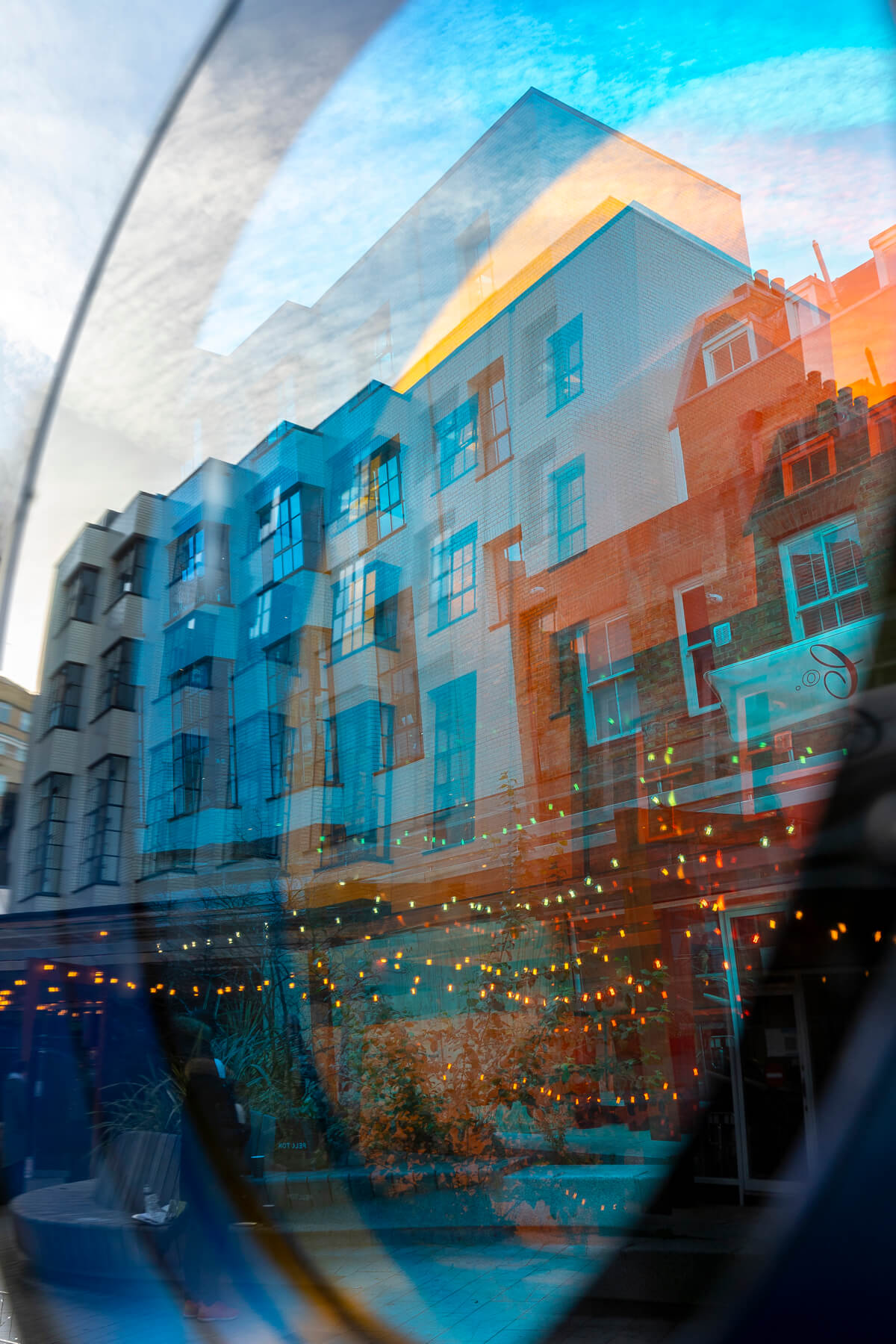 “I wanted to create a mysterious monument,” says Söderberg Mills, “one that plays with light and alludes to secret meanings.” Upon approach, each lens merges the reflection of the viewer with layered and refracted echoes of the surrounding urban landscape, creating a compelling dialogue between bodies and cities. 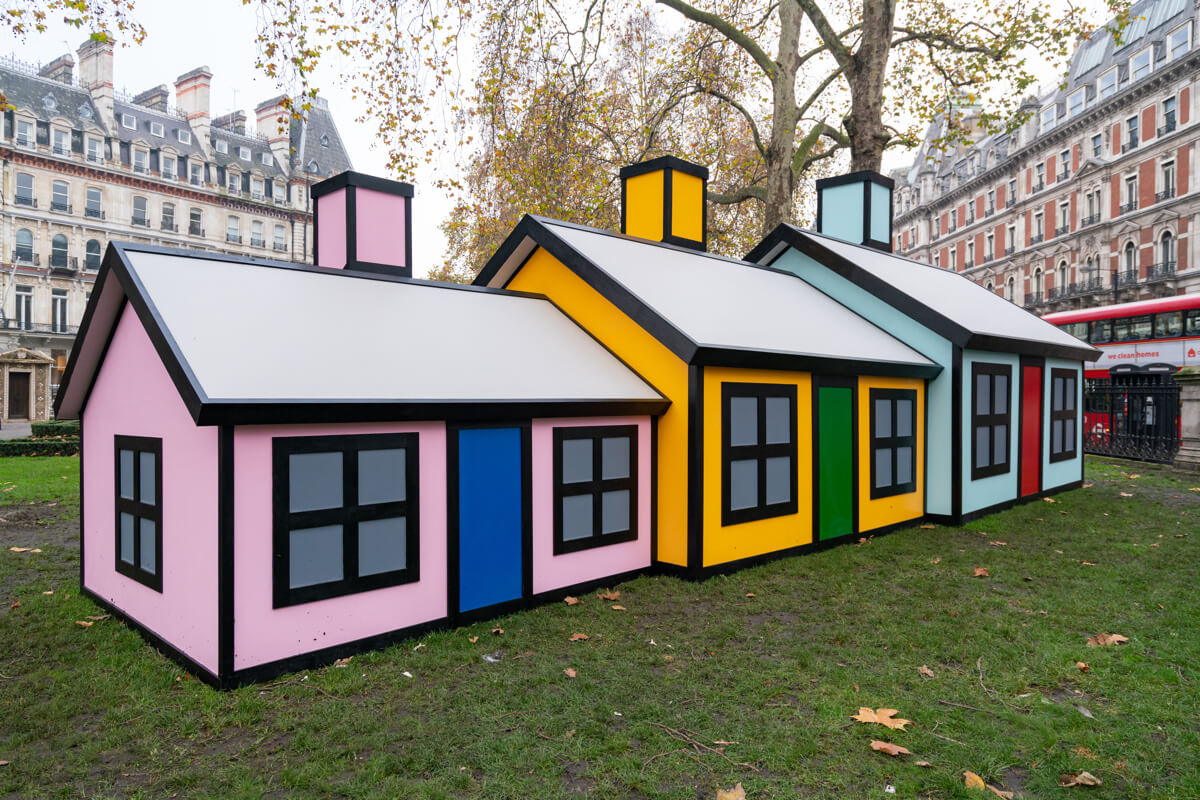 In Lower Grosvenor Gardens, celebrated British artist Richard Woods expands on his exploration of the “cult of home improvement and DIY aesthetics” (seen in such works as the Holiday Homes series) with a trio of near full-scale residences titled Small, Medium, Large. The pink, marigold and cyan dwellings appear like cartoonish renderings of domestic architecture, complete with colourful front doors and thick black outlines that straddle the line between installation and drawing. 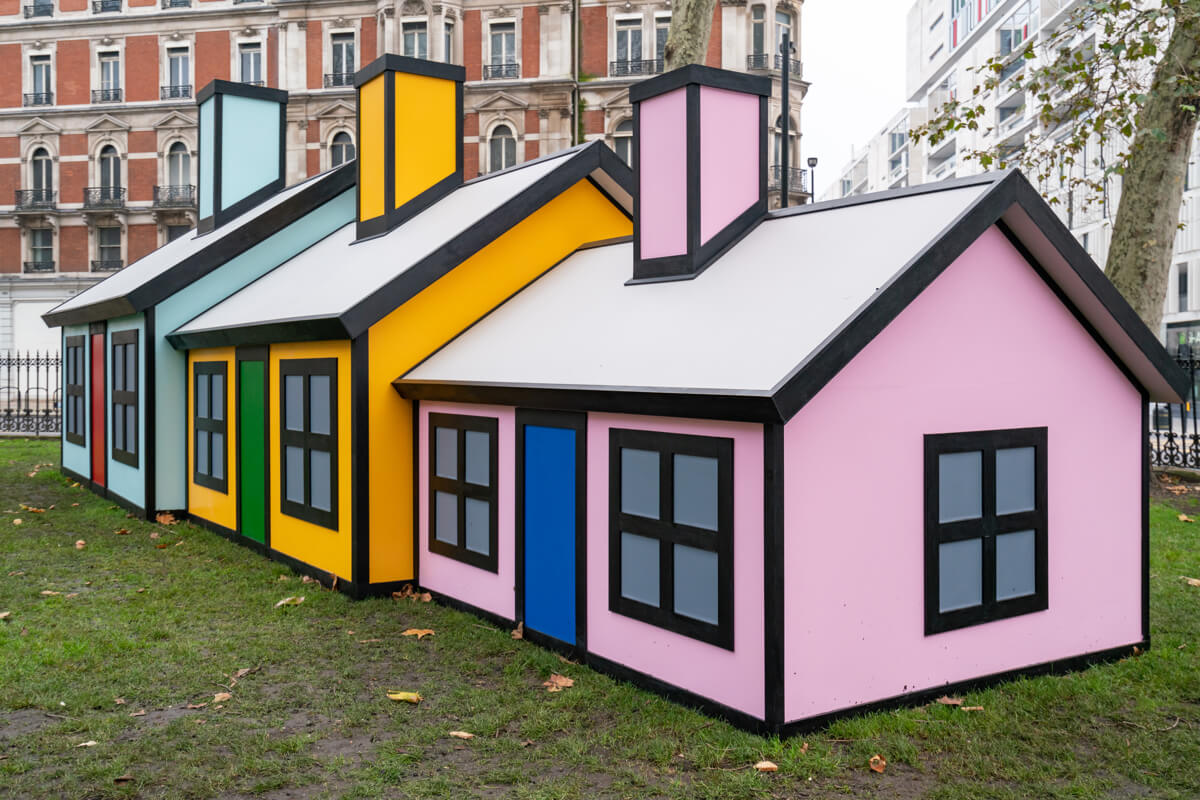 These idiosyncratic dwellings are also intended to explore both scale and greater relationships to the city. “It’s large enough that standing at one end of it distorts your point of view,” he says. “The big house looks small and the small house looks big depending on your perspective.”

Meanwhile, only three blocks away, local multidisciplinary designer Emily Forgot‘s Fabriques are yet another architecturally-minded intervention. The collection of self-described “archi-sculptures” take inspiration from the shell-encrusted shelters conceived in the 20th century by architect Jean Charles Moreaux for a triangular park nearby, translating the French designer’s charming abodes into a suite of vibrant orange, blue and green outdoor furnishings with a distinct POMO edge. “On discovering that the intriguing shell huts in Grosvenor garden were known as Fabriques,” she says, “I decided to celebrate these fanciful cross-cultural constructions.” 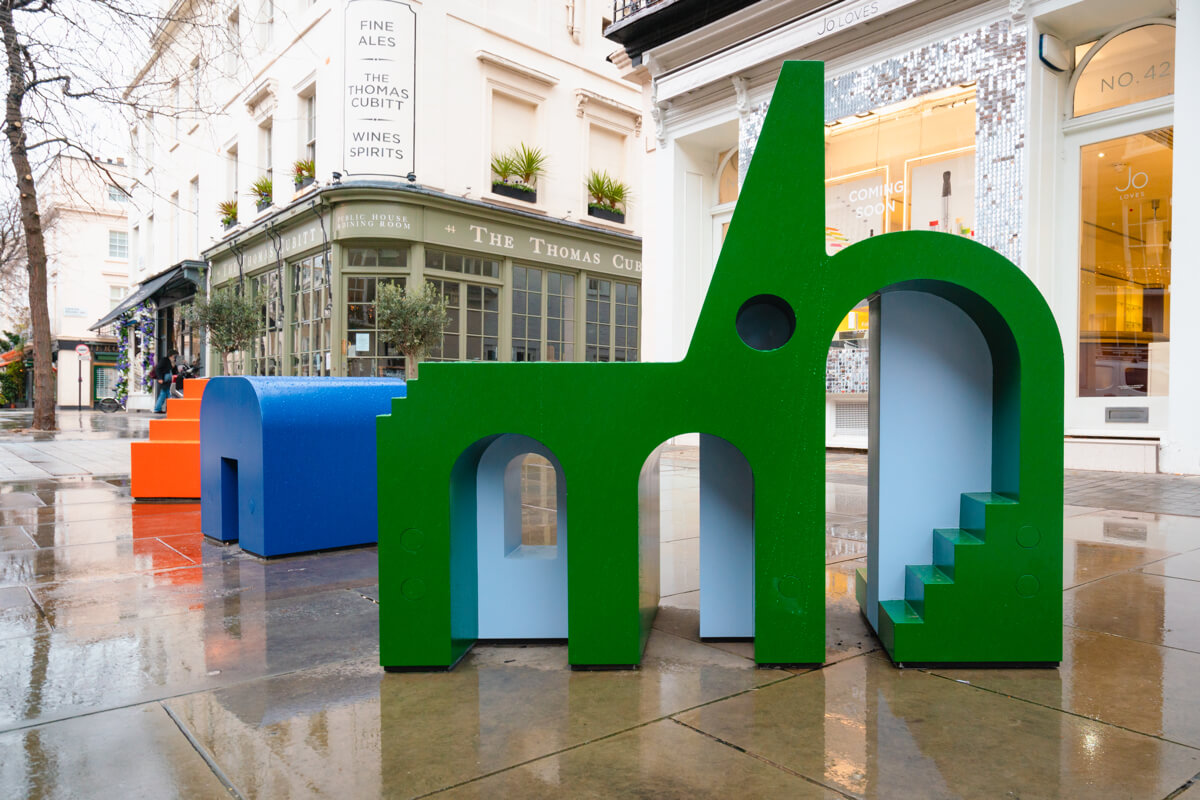 While ongoing vaccination rollouts inspire a sense of hope for a swift end to a year’s worth of sheltering in place, Wander Art will remain on view until June 2021, bringing a much-needed sense of community and conviviality to the city in the way only art can. “It’s an ambitious but rewarding challenge,” says Alter-Project’s creative producer Sharon Kwiatkowski of the exhibition, commissioned by Landlord Grosvenor Britain & Ireland, “to bring to life the visions of 12 talented artists, all with the same goal of injecting colour and joy across Mayfair and Belgravia for people of all ages to enjoy.”

In a city hit hard by the COVID-19 pandemic, Alter-Projects curates an outdoor trail of bold new public art to provide a much needed sense of community and connection.