Welcome to Somewhere City
Illustrator Goran Lelas has worked on shoes for Sergio Rossi, and with Alberto Alessi on children's books. But as Rachel Pulfer finds in her first online column, Material Culture – which covers design, culture and commerce – Lelas' most whimsical project yet is his latest: the mix-and-match characters of Somewhere City. Image – STRANGEco. 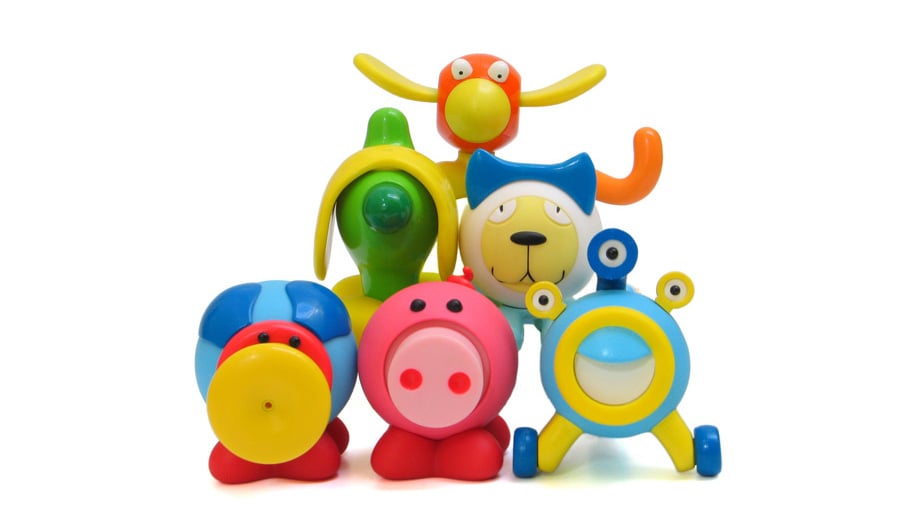 Somewhere City is a fantastical place that is simultaneously everywhere and nowhere. It floats across the surface of the earth, its motion fueled by the Secret Thought of its inhabitants. And in this city that floats, everything floats, so chances are if you leave home in the morning, you might have a new neighbour by nightfall.

Somewhere City is inhabited by citizens as exotic as its premise. There’s , an elephant that helps kids remember important things, such as a lost friend or a mislaid cookie. Or consider Oink Le Rouge, a famous actor and the founder of Somewhere City’s Oink Theater. As of November 28, six of the characters are now available for purchase – in toy form – at the MoMA Design Store in New York City.

“I started working on Somewhere City about five years ago, at my parents’ place in the Adriatic,” Lelas says over the phone from his Manhattan studio. (He divides his time between New York and Italy.) “I had just had a son, and I wanted to do children’s toys. So I sat down to draw, and I created over four thousand characters.” Lelas took the drawings to Milan, to show them to one of his favorite collaborators, Alberto Alessi.

“Alessi was sitting in his office, which is the most unbelieveable creative disorder you can imagine,” says Lelas. “One million books, prototypes everywhere. He sits on a chair that is made of a saxophone.” Alessi was initially uncertain about making the toys. “But then I showed him the drawings and a few minutes later he was on the phone with his production manager, trying to figure out what they could do with them.” Alessi made six prototypes, but, says Lelas, the marketing director couldn’t figure out the market for them. “So I brought them to New York.”

Lelas first came to New York in 2000 to work on costume designs for a Chinese version of the opera, Aida. He liked the city’s energy so much, he kept coming back. On one of those visits he brought his Alessi prototypes. “I showed them to [MoMA design curator] Paola Antonelli,” he says. Antonelli told Lelas to show them to the director of MoMA retail, who connected Lelas to STRANGEco, a U.S.-based producer and distributor of artist-designed toys. STRANGEco took them on, and the four-inch toys are now available at MoMA retail outlets throughout Manhattan, or online at www.MoMAstore.org.

Lelas’s exuberant, colourful aesthetic has appeared in many forms. Graduating in illustration from the University of Design Zagreb in his native Croatia, Lelas first exhibited in Milan in 1985, showing a series of costume designs inspired by the colourful, graphic furniture of Alessandro Mendini and the design movement Memphis. Shoe sculptures for iconic shoe design house Sergio Rossi and book collaborations with product manufacturer Alberto Alessi followed. And now, Lelas is enjoying the buzz of launching Somewhere City.

So what’s next for Lelas? Having worked so hard to bring Somewhere City to life in New York, he wants to turn the toys into a puppet TV show. “Television here is so negative!” he says. “You wake up and the first thing you hear is that somebody died. Then there are people going to pharmacies to buy pills to make themselves happy again. It’s crazy.”

Unlike the Muppet Show or Teletubbies, Lelas’s show would be for all ages, so adults don’t forget what it means to see the world as a child. “It’s very important, the ability to think like a kid,” he says. “Alberto Alessi – he is still a kid. That’s why he can be so creative. My show would help people think like that.” He is currently searching for a partner.