Wellness by Design: MVRDV’s Seoul Skygarden
Taking its cue from New York's High Line, the Seoul Skygarden will immerse pedestrians in a lush oasis up high. 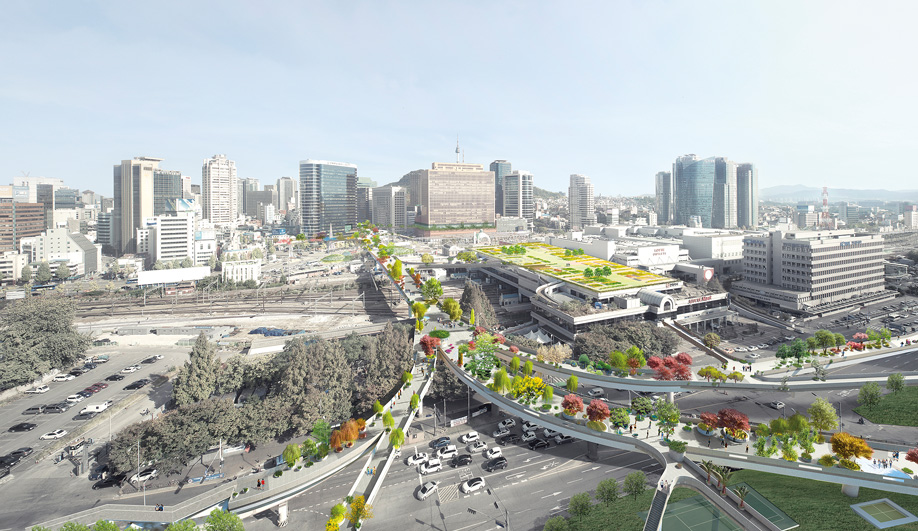 Taking its cue from New York’s High Line, the Seoul Skygarden will immerse pedestrians in a lush oasis up high.

New York’s High Line has sent a message to politicians: they need to wrestle back green space from the concrete jungle, for the health of their cities and citizenry. Seoul, a booming metropolis of 10 million, got the memo. Earlier this year, it approved the 938-metre-long Skygarden atop a defunct elevated highway in the downtown core. Dutch architecture firm MVRDV, winners of the international competition, have devised a fantastical urban nursery that jives with South Korea’s particular taste for whimsy.

When it’s completed in 2017, the Skygarden will lead visitors across a veritable arboretum, with trees, shrubs and flowers unfurling in the order of their names in the Korean alphabet, to educate as well as nourish. “It is a living dictionary of the natural heritage,” says MVRDV co-director Winy Maas, “connecting urban dwellers with nature, and changing their daily lives for the better with a pleasant shortcut through a green oasis.”

The plan speaks to how far we’ve come in reclaiming parts of the urban infrastructure as parkland, especially in crowded cities. It’s well known that living in close proximity to green space not only improves air quality; it encourages people to walk more and connect with the community. Parks also help to decrease the severity of depression and other mood disorders. Recent research, conducted by the University of Exeter Medical School among other labs, has found that living near natural environments can improve mental health almost immediately.

It’s not exactly a new formula. Squalor and disease were killing off East London’s working classes 175 years ago when Queen Victoria gifted the people a tract of land for Victoria Park. Years later, Central Park gave Manhattan a green haven. In the 21st century, there are no more large tracts of urban land to give, which is why schemes like the Seoul Skygarden, along with Thomas Heatherwick’s proposed Garden Bridge across the Thames in London, are now receiving enthusiastic city funding. In Toronto, Ivanhoé Cambridge is designing a 4,000-square-metre Sky Park that connects the two new towers going up near Union Station. Even developers are hip to the High Line effect.