What’s Next for Nest?
Can Nest, and a generation of app-controlled devices, connect every home in the neighbourhood to the smart grid? 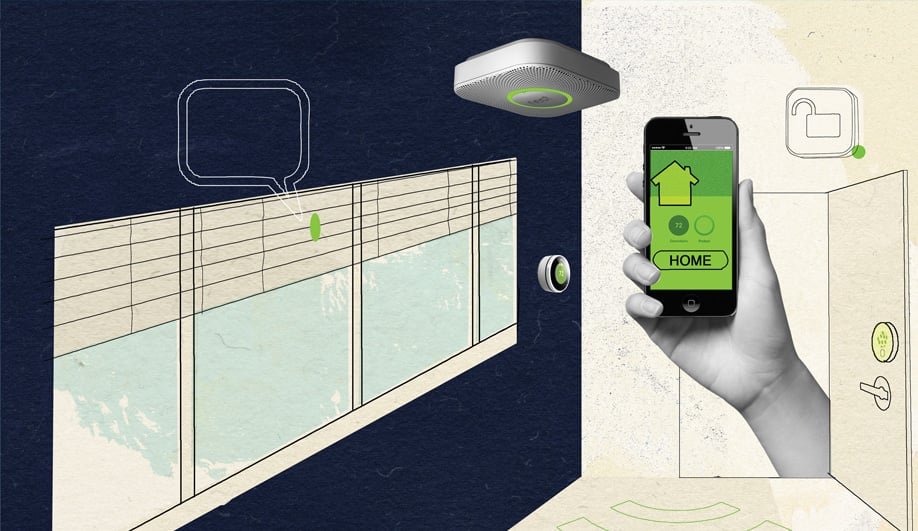 Every time a tech writer invokes the Internet of Things, a fog of confusion settles over the audience. The phrase refers to a vague time in the future when every element of our physical world, from light fixtures to shower heads, will be controlled online. Just as most people use smart phones (or rather, because of this fact), we will one day live in smart homes. While companies already exist that can rewire and automate your house from top to bottom (a mind-­boggling feat for any homeowner), a new range of sleek gadgets is making the hooked-up residence more accessible to everyone.

The most successful so far, the Nest thermostat, sold out immediately after its release in 2011. The Palo Alto company* behind it is led by Tony Fadell, who helped Apple design the iPod and the iPhone. His sensibility has transformed the thermostat, an essential but unloved device, into one we want to interact with on multiple levels.

Now, with Nest’s launch of a new smoke detector called Protect last October, it’s emerging as the Apple of home tech, rolling out products one by one that ease us into improved technology through a well-designed, user-friendly package. Besides fitting seamlessly into the home, both visually and practically, they communicate with each other via a single app, which has positioned Nest as a leader in coveted gadgets for the connected home.

But first the design. The thermostat’s solid stainless steel ring and polished black glass face might evoke a MacBook Pro laptop, but the bevelled cylindrical body disrupts the conventional idea of how a thermostat should look, making the old, blocky beige model a visual carbuncle. Protect, meanwhile, is a sleek square in black or white with rounded corners and a perforated sunflower pattern, through which it detects motion as well as smoke and carbon monoxide. Sensors activate a glowing ring that lights your way, so you don’t have to grope around in the dark for a light switch.

The thermostat automatically switches to away mode and lowers the temperature when you’re out, on vacation, or just in another room; and you can turn up the heat remotely while heading home. Nest also sends you monthly reports that issue green “Leafs” for good behaviour, and encourages you to save money and energy with little nudges such as “How about wearing another sweater this week?”

Similarly, the smoke detector monitors your home and sends you alerts, via text messages or by speaking to you. No more flapping a towel at a shrieking alarm when dinner starts to burn. Even before Protect goes off, it warns you in a calm, Siri-like voice: “Heads up. There’s smoke in the kids’ bedroom.” The motion sensor registers a purposeful wave of the hand and deactivates the detector instantly. If you’re not home, the app handles the problem by calling an emergency contact, or by having the thermostat turn off the furnace in case of a carbon monoxide leak.

The most compelling aspect of Nest is where it fits into the Internet of Things, and the implications on a community level. Already, the company is partnering with utilities in the U.S. to inform its customers through the thermostat about peak load times, and to reward them with rebates for decreasing their usage. Such synchronization opens up myriad opportunities, as does the introduction of other smart gadgets to this new market.

A French company, Netatmo, just released an app-controlled thermostat by Philippe Starck; Yves Béhar has a new automated door lock that can issue virtual keys to friends and family; and SmartThings produces a network of motion-triggered alarms. There is even an LED bulb you can dim from your phone. As cities invest in smart grids, people will be enabled to make a huge difference just by tweaking their behaviour, adjusting their energy consumption and monitoring their safety and their neighbours’ – all with the ease of sending a Tweet.

*In the time since this article appeared in our Jan/Feb 2014 issue, Nest has been purchased by Google for $3.2 billion.