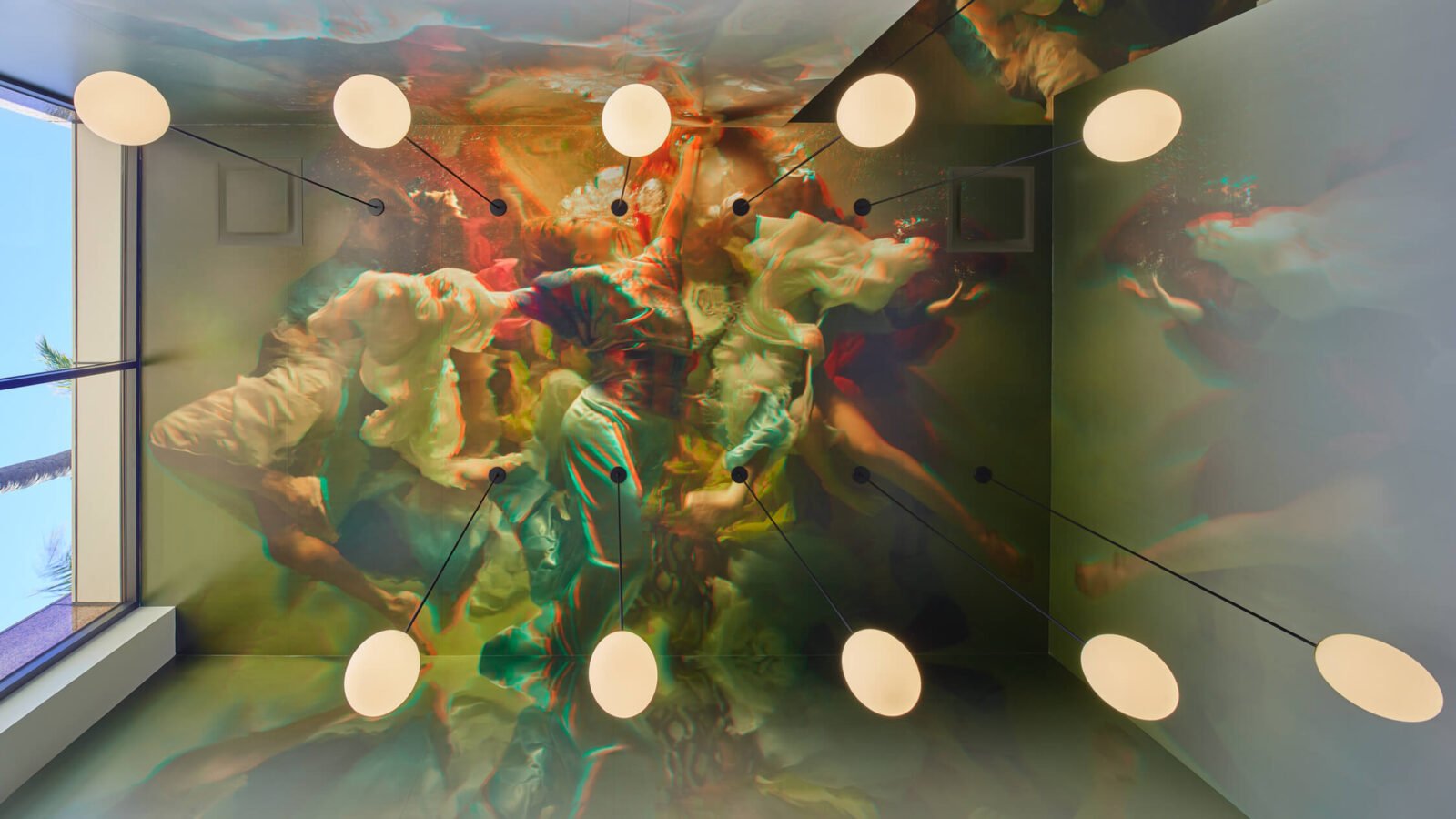 Simply look up and you’ll soon notice there’s no shortage of striking ceilings. From the iconic Sistine Chapel to Rococo flair of the Pilgrimage Church of Wies in Bavaria, architects have put as much emphasis on what happens above your head as below your feet. Stereoscope — a new coffee shop in Los Angeles’ Newport Beach — riffs on such historical opulence for a bold cafe that’s as much as contemporary cathedral as it is a high-designed grab-and-go.

Inspired by a recent visit to the Cathedral of Parma and the a 16th-century fresco Assumption of the Virgin by Antonio da Correggio adorning the dome, David Wick (of Wick Architecture & Design) and Andrew Lindley (of LAND Design Studio) translated this precedent into a graphic, technicolour canopy that defines the 62-square-metre interior. “The client wanted something that had never been done before,” says Wick. “This project is a prime example of how interior design can transport a vision beyond the confines of the space that it occupies.”

To remedy the tall yet relatively narrow L-shaped footprint of the L.A. cafe’s second outpost, Wick and Lindley commissioned American photographer Christy Lee Rogers — renowned for her underwater portraits that revel in the dramatic light and shadow of baroque art — to produce a striking image to adorn the four-and-a-half-metre ceiling. Her work The Reunion of Cathryn Carrie and Jean was eventually selected and converted into a three-dimensional image (a nod to the cafe’s moniker, a device used for viewing depth in photographic images prior to current 3D technology).

Heightening the drama of the ceiling, Lindley notes that the graphic was designed to “seamlessly fade into the white of the walls” at two and a half metres above the floor. Meeting the point of gradation, Andrew Neyer’s Astro Globe pendants offer a refined counterpoint to Roger’s work (printed and produced in collaboration with Nashville-based Big Visual Group).

“In contrast to the boldness of the cathedral-like ceiling,” they add, “a warm, modern palette grounds Stereoscope’s interior.” Set off by the monolithic, polished concrete floor, a custom white oak bench and delicate white tables line two walls of the cafe, complemented by a linear counter wrapped in richly veined blue orca marble.

Though the striking canopy is conceived to be viewed with or without the aid of 3D glasses, the designers integrated a shallow oak ledge to prominently display an assortment of spectacles for visitors to use. It’s a unique invitation to take a seat, pause for a moment and to look up – all while waiting for your pour over.