Zaha Hadid’s Legacy in 10 Projects
The world of architecture was shaken today by news of Zaha Hadid's death. The Iraqi-born, London-based architect was a force to be reckoned with, and her legacy will live on in her stunning buildings - both built and underway. 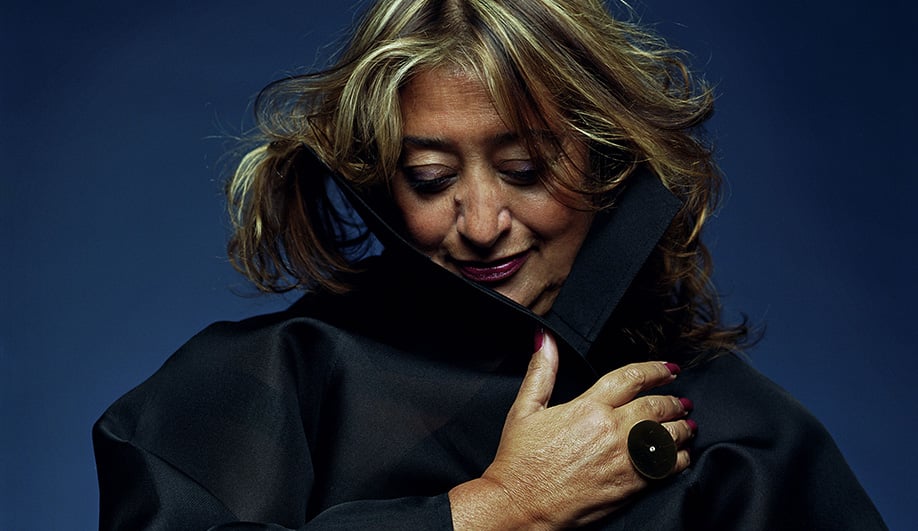 Few architects are as polarizing as Zaha Hadid was. Today, when it was announced that the Pritzker Prize-winning tour de force died suddenly, at the age of 65, of a heart attack in Miami, her contemporaries expressed shock and sadness, while the design press began to grapple with the legacy of an architect known as much for the sweeping curves and angular thrusts of her boldest works as for her sometimes-acerbic public persona. One thing is for certain: Hadid created a collection of striking buildings over two decades that celebrated the sculptural and visionary possibilities of architecture. And she did so as one of the few female architects at the pinnacle of the profession. 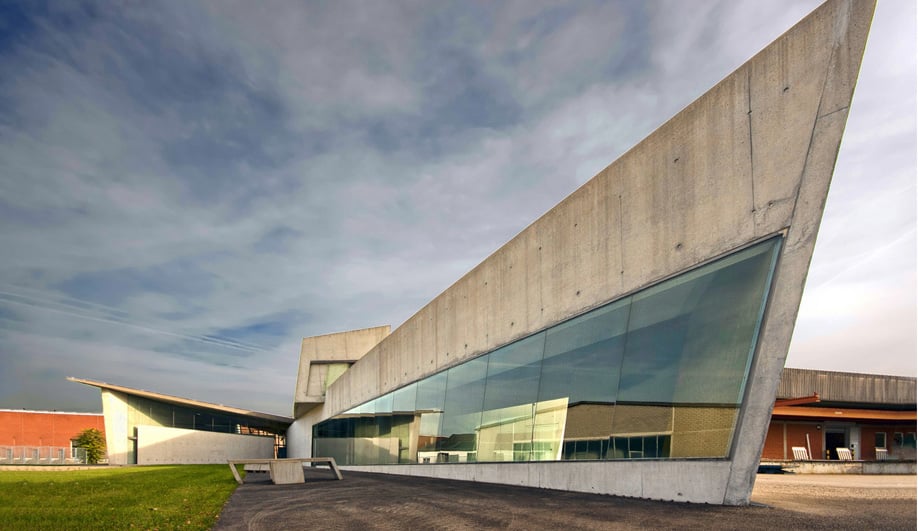 1 Vitra Fire Station, Weil am Rhein, Germany, 1993
Zaha Hadid burst onto the scene, and proved she was more than a paper architect, when she completed this angular masterpiece in 1993, at the age of 43. Located on the Vitra Campus in Weil Am Rhein, Germany – home to small buildings and artworks by Renzo Piano, Carsten Höller, Alvaro Siza and others – the concrete building was a manifestation of her deconstructivist vision, like one of her paintings come to life. Its dramatic intersecting planes connect it to the landscape, and create a dynamic interplay of jutting surfaces. At first used as a fire station (and for good reason: the original Vitra furniture factories burned down in a 1981 fire), it now houses exhibitions. 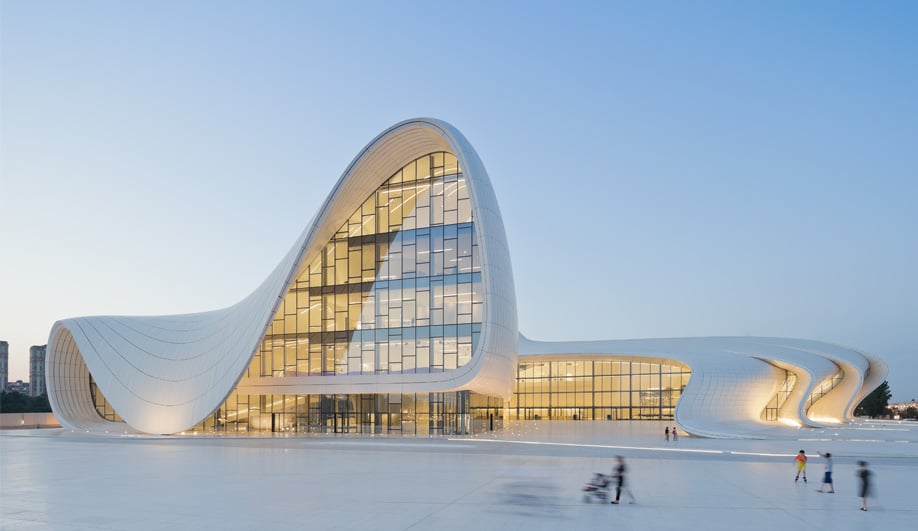 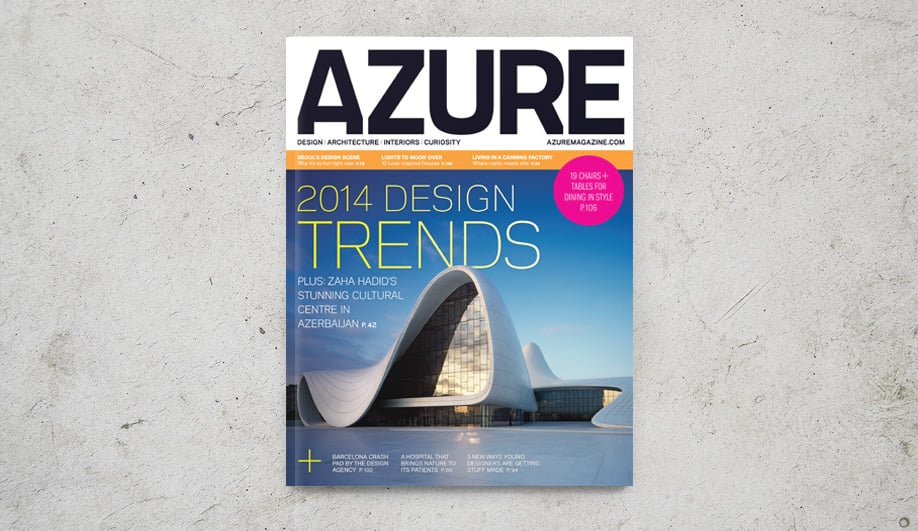 2 Heydar Aliyev Cultural Centre, 2013
It was an easy decision to choose the Heydar Aliyev Cultural Centre in Azerbaijan as our cover for the October 2013 issue. Architecture writer Josephine Minutillo wrote of the dazzling project: “Unlike many of Hadid’s earlier buildings, the complex curves of centre’s shell were achieved using space frame construction, which incorporates glass facades that ride the waves to the roof, flooding the interiors with natural light. Rather than leaving a stylish imprint on the latest region to become a hotbed of development, Hadid has created an entire campus of jaw-dropping indoor and outdoor spaces.” 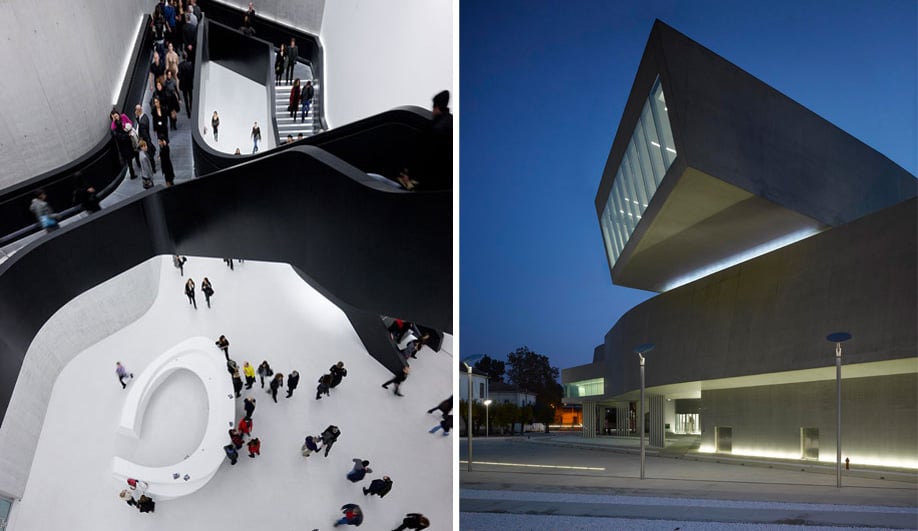 3 MAXXI, Museum of Arts of the XXI century, Rome, 2009
Buildings by ZHA are just as dramatic inside as they are out. The entrance to the MAXXI Museum in Rome is defined by a spectacular web of floating black stairs set against an all-white interior. The firm has said of the project: “It is ‘not an object-container, but rather a campus for art’, where flows and pathways overlap and connect in order to create a dynamic and interactive space.”

In addition to two museums – one devoted to 21st century art, the other architecture – the complex includes an auditorium, library and media library, bookshop and cafeteria, spaces for temporary exhibitions, outdoor spaces, live events and commercial activities, and places for study and leisure. The elaborate programming is bound by Hadid’s love for concrete curved walls that create what she described as “a new fluid kind of spatiality designed to embody the chaotic fluidity of modern life.” Beautiful. 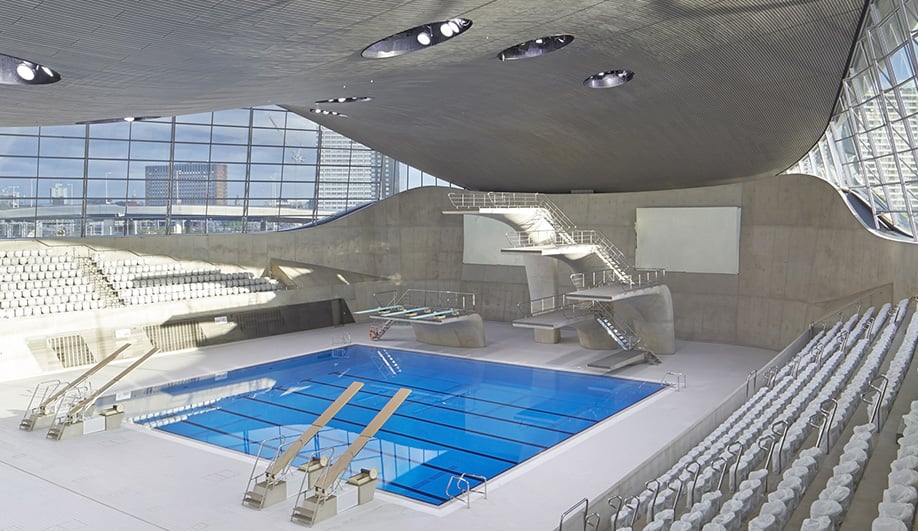 4 London Olympic Aquatic Centre, 2012
Plans for this aquatic centre were drawn up before Hadid’s adopted city won the bid to host to the Games in 2012. To accommodate an additional 15,000 spectators, two boxy volumes were added to each side of the centre’s elegant oblong shape. Dubbed the “water wings,” the two temporary structures caused some seats to have restricted views. Local journalists also noted the centre was the most expensive structure to go up at the Olympic site and took the longest to build. But the criticism has since subsided, now that the wings have been removed and the centre has reopened to the public. Mayor Boris Johnson described it as a “majestic jewel” and IOC President Jacques Rogge called it simply a “masterpiece.” 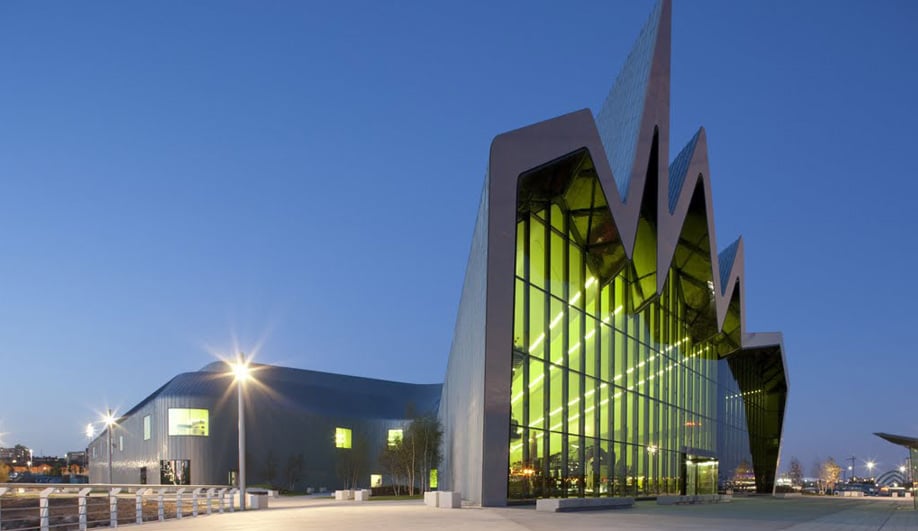 5 Riverside Museum, Glasgow, 2011
Combining curves and angles, Riverside Museum captures Hadid’s aesthetic vision. The Glasgow museum of transport features a zigzag roofline softened by the rounded edges of each peak; clad in zinc tiles and welcoming visitors through a massive glass entrance, the building is also a study in material contrast. In plan, the 11,300-square-metre structure cuts a Z-shape across its site. And inside – where, once again, Hadid has sculpted the spaces and the integrated lighting for maximum effect – an installation of bicycles zips along the ceiling’s curves. 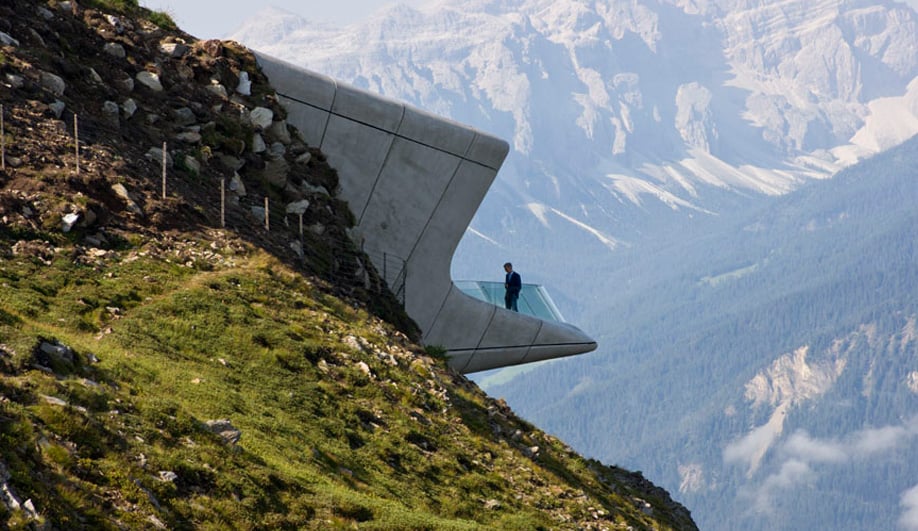 6 Messner Mountain Museum Corones, South Tyrol, Italy, 2015
Azure wrote about this modestly scaled – though no less jaw-dropping – museum in northern Italy when it opened in August, 2015. To realize the cliffhanging structure, 4,000 cubic metres of earth and rock were dug up and then packed in around the museum to partially shroud, contain and insulate its 40-to-50-centimetre-thick exterior walls. The panels that compose the exterior of the 1,000-square-metre museum were cast in light-hued fibreglass-reinforced concrete, its coloration inspired by the stone of the Dolomites.

Inside, the concrete is darker, to reflect the deeper shade of rock found underneath the summit. Staircases cascade throughout the museum’s multiple levels, lighting recessed into the concrete ceilings chasing the curved contours of every surface. There couldn’t be a more apt application of Hadid’s sensuous, organic lines than in a museum dedicated to capturing the peaks and valleys of the Alps. 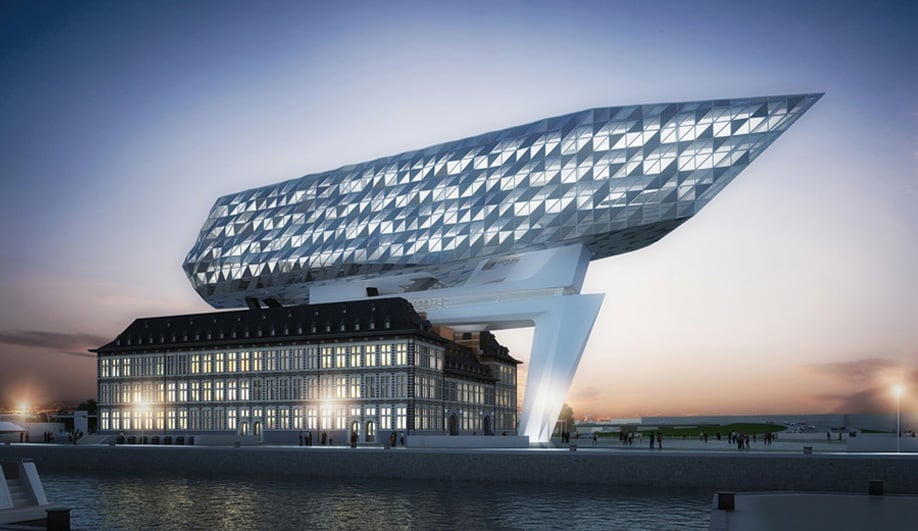 7 Antwerp Port House, completion expected by late 2016
Hadid’s legacy will continue to live on with the buildings that are now at the proposal stage or currently under construction. The Antwerp Port House is one posthumous project that is set to open later this year. Its dramatic form conjures up a host of metaphors, from a dreamy vessel and its keel to an enormous diamond in its setting. Since winning the competition in 2009, Hadid has been renovating the original fire station and preparing it for its glittering crown – a functional beauty that establishes a much grander Port House Authority headquarters for Belgium, with 12,800 square metres for 500 staff members. The new building will provide its occupants with some of the most panoramic views of the habour and of the city centre, visible through the facade’s reflective walls. 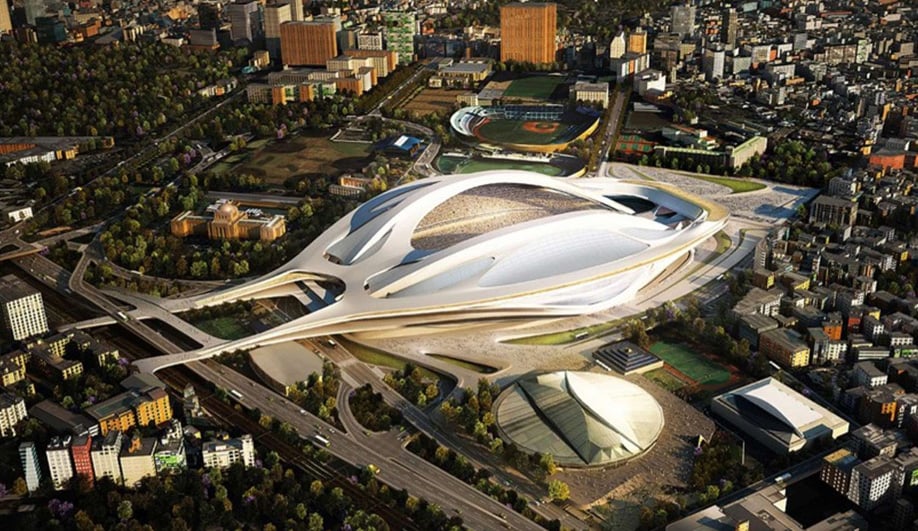 Hadid’s bid for the Tokyo Olympic Stadium 2020 turned into one of her most controversial. ZHA originally won the high-profile commission in 2012, beating out 46 other international finalists. But late last year, the ambitious plans, which at one point employed over 100 architects, were aborted by Japan Prime Minister Shinzo Abe, who voiced the public’s concerns about costs spiralling out of control, and construction delays that were pushing the project way past its deadline. ZHA fought back vigorously and publicly, saying the accusations were false. In January Japanese architect Kengo Kuma won the rebid with a more modest stadium, which Hadid said was a variation of her original plan. The dispute remains unresolved. 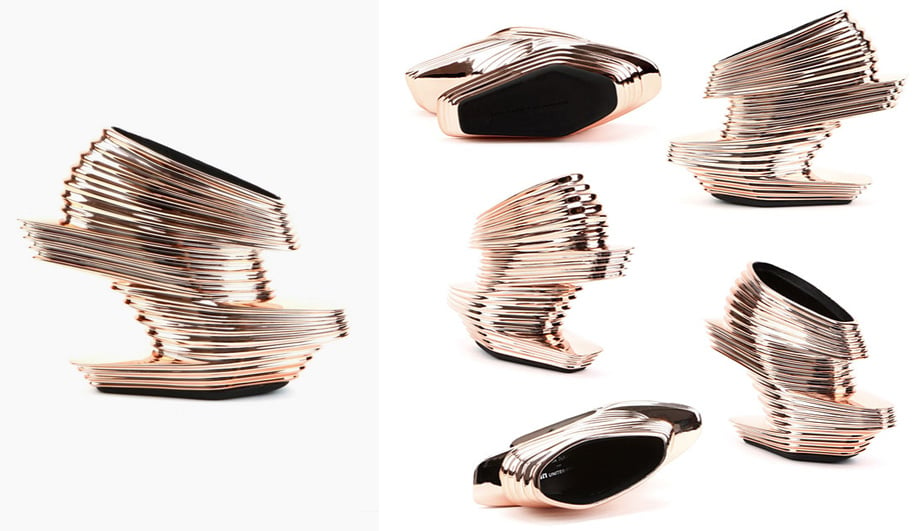 9 United Nude Nova shoe, 2013
Shoes were one of Hadid’s great passions. Melissa and Adidas were among the manufacturers she worked with over the years, but United Nude was the brand that produced some of her most statement-making designs. Her collaborator, UN creative director Rem d Koolhaas, invited her to “ignore the rules” and create an entirely new form of footwear. The Nova, debuted in 2013, shows off her unmistakable architectural language; it’s composed of a 6.25-inch carbon fibre wedge and heel, a chromed vinyl upper and a leather interior. 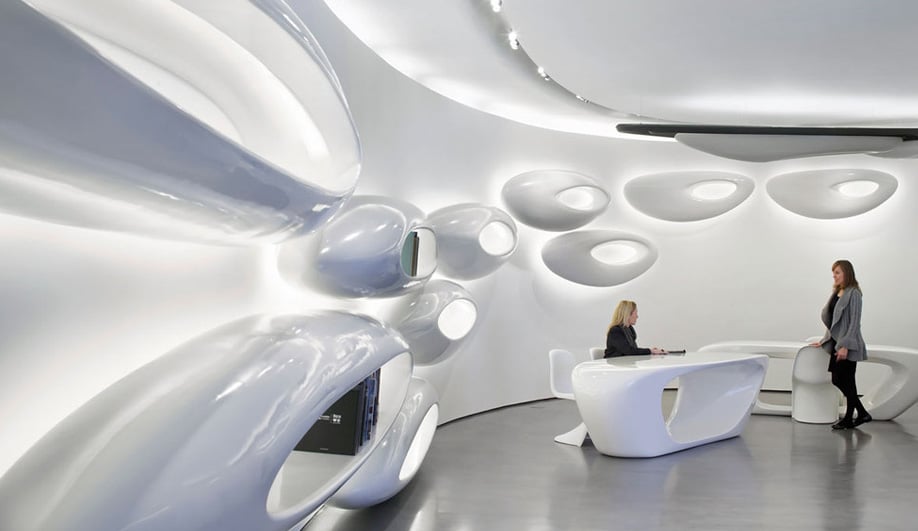 10 Roca Gallery London, 2011
In 2011, the international bathroom company Roca launched a showroom and exhibition space that was entirely Zaha, right down to the biomorphic reception desk and integrated lights and shelving shaped like giant sea bubbles. The gallery consists of 1,100 square metres of cavernous spaces and enclosed offices that traverse one level. And as Hadid intended, every surface appears as through sculpted by water. The third project she completed in her adopted city, the showroom is one of London’s top attractions for architectural aficionados.