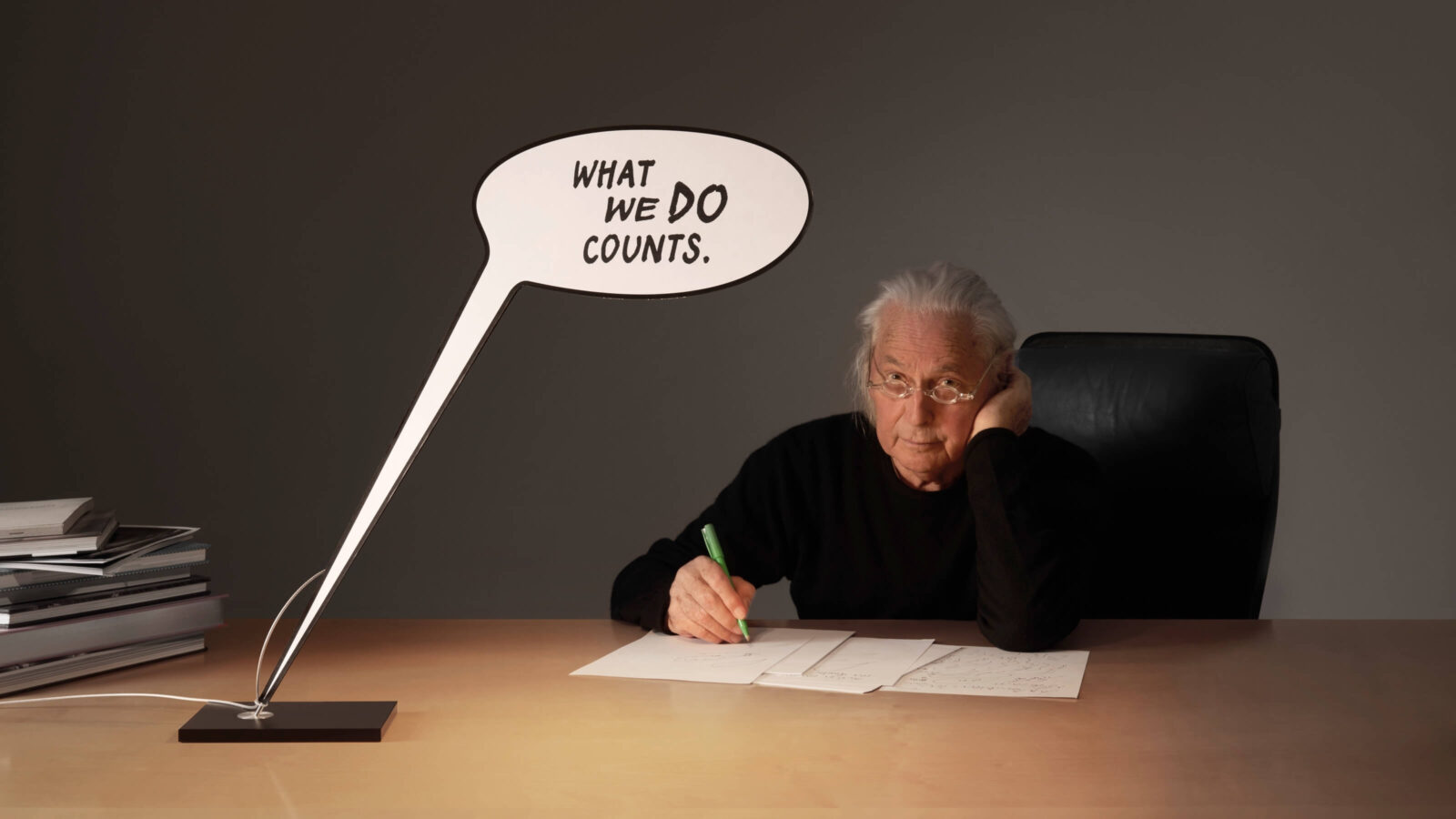 10 Icons by Ingo Maurer, the Poet of Light

German lighting designer Ingo Maurer has died – but his light lives on. These 10 pieces shine brightest.

When Ingo Maurer died last week, at the age of 87, the design world lost one of its great artists. The German designer was not only the eponym of a staggeringly successful lighting brand, he was also a singular poet of light. His works were enamoured with nature and humanity and appeared to be powered by their own momentum: He arranged constellations of swirling butterflies around incandescent bulbs, dripped dazzling crystals from fishermen’s nets, tossed up a shattering of porcelain dishes named Porca Miseria! (Italian for “Holy #&?^%$#@!”) into the air. His artistry often seemed at odds with his brand’s prolific output: Every year, whether at Euroluce or Light + Building, the Ingo Maurer stand was bursting with countless innovations both aesthetic and technological. He could make magic with humble materials – from aluminum tubes to latex gloves – while also testing out the latest LED technologies.

Maurer’s achievements were many and they were all heart-expanding odes to the power of light and beauty. Here are 10 of our favourite Ingo Maurer light fixtures. 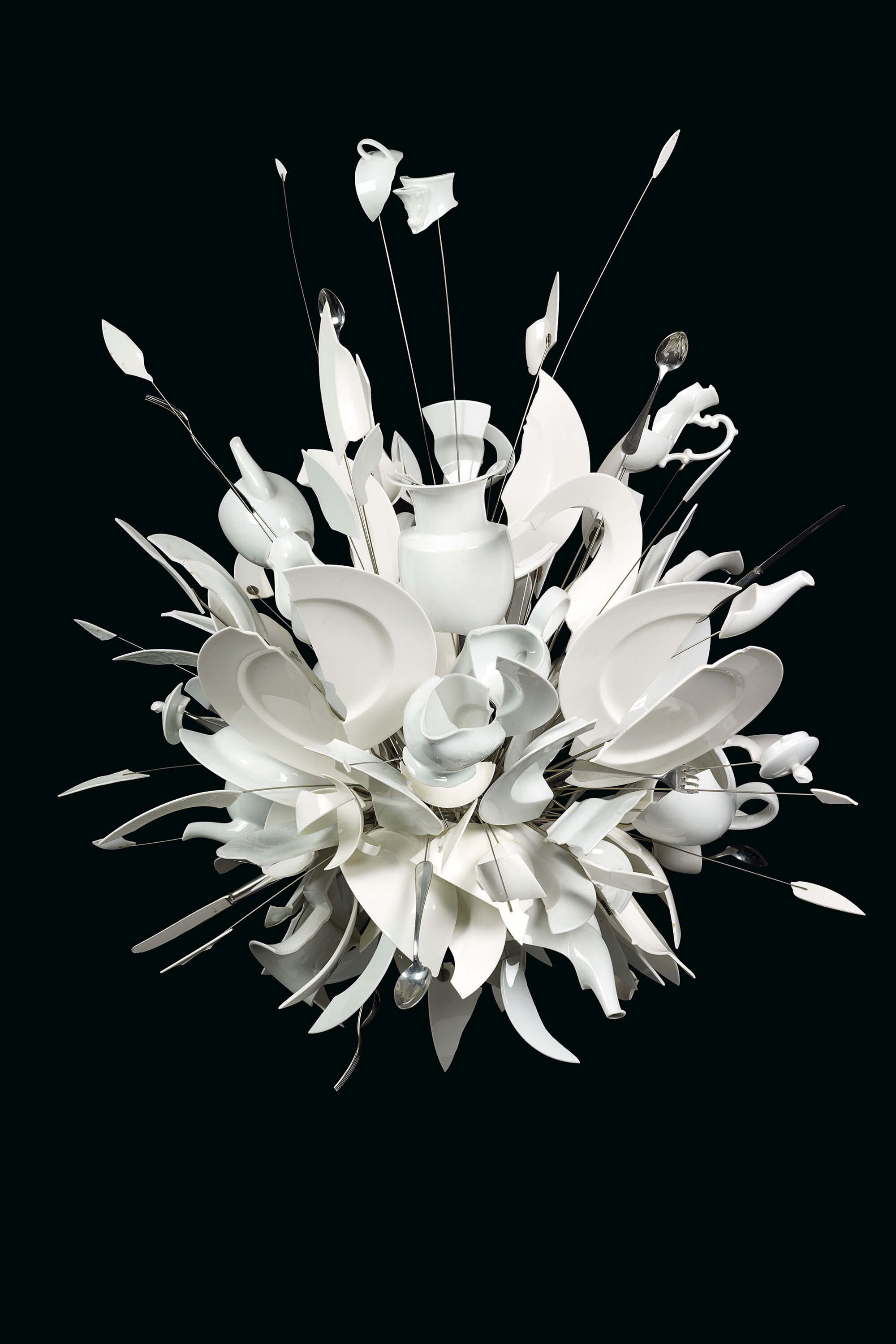 Legend has it that Maurer changed the name of one of his most famous chandeliers (originally called Zabriskie Point, after Michelangelo Antonioni’s 1970 film, with its slow-motion explosions) upon overhearing a couple of Italians’ spirited reactions to it. Calling to mind a kitchen disaster of epic proportions, each chandelier (first designed in 1994) is part of a limited edition; it’s crafted by four artisans who hammer and shatter porcelain dishes before composing the shards with silverware into a unique arrangement. 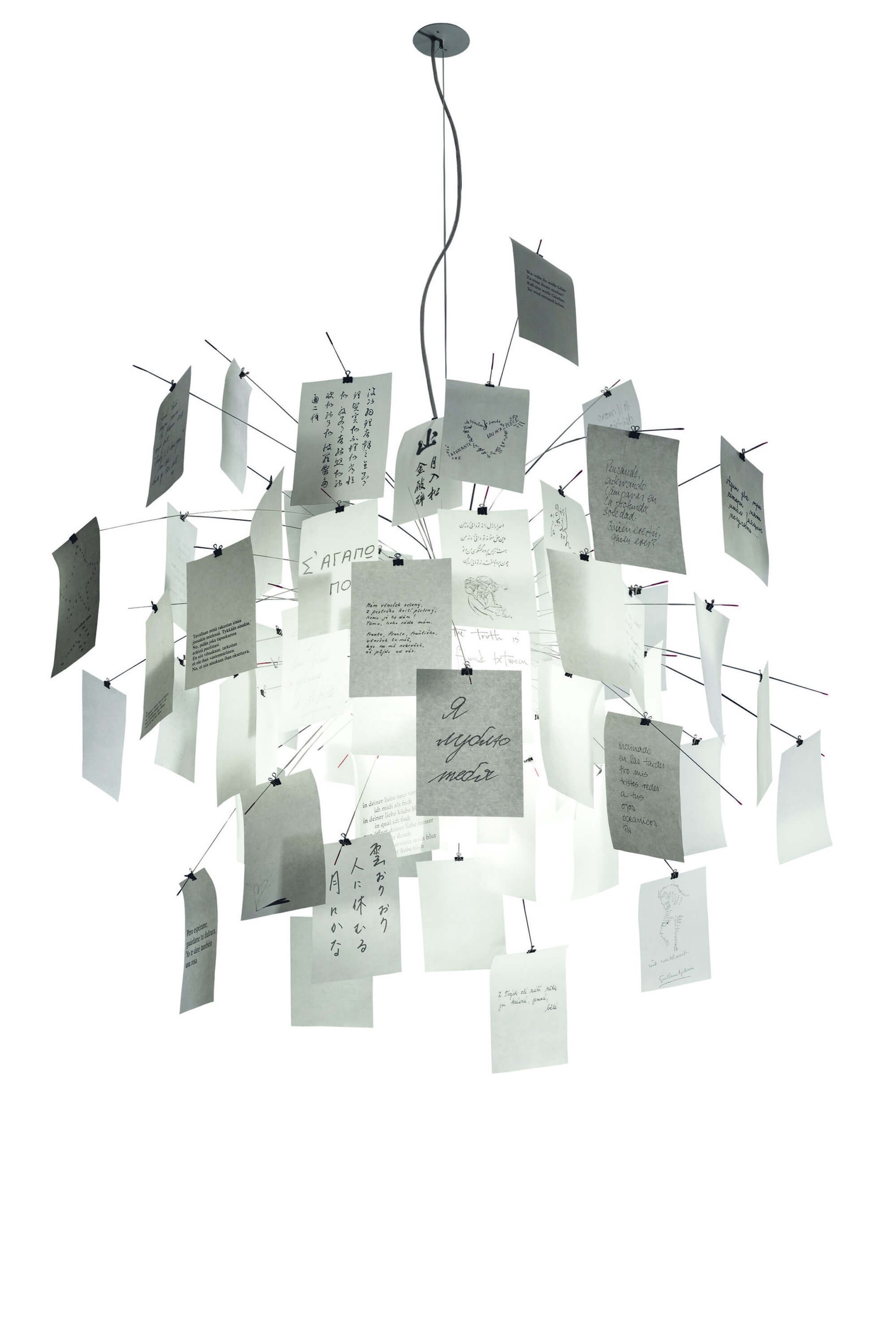 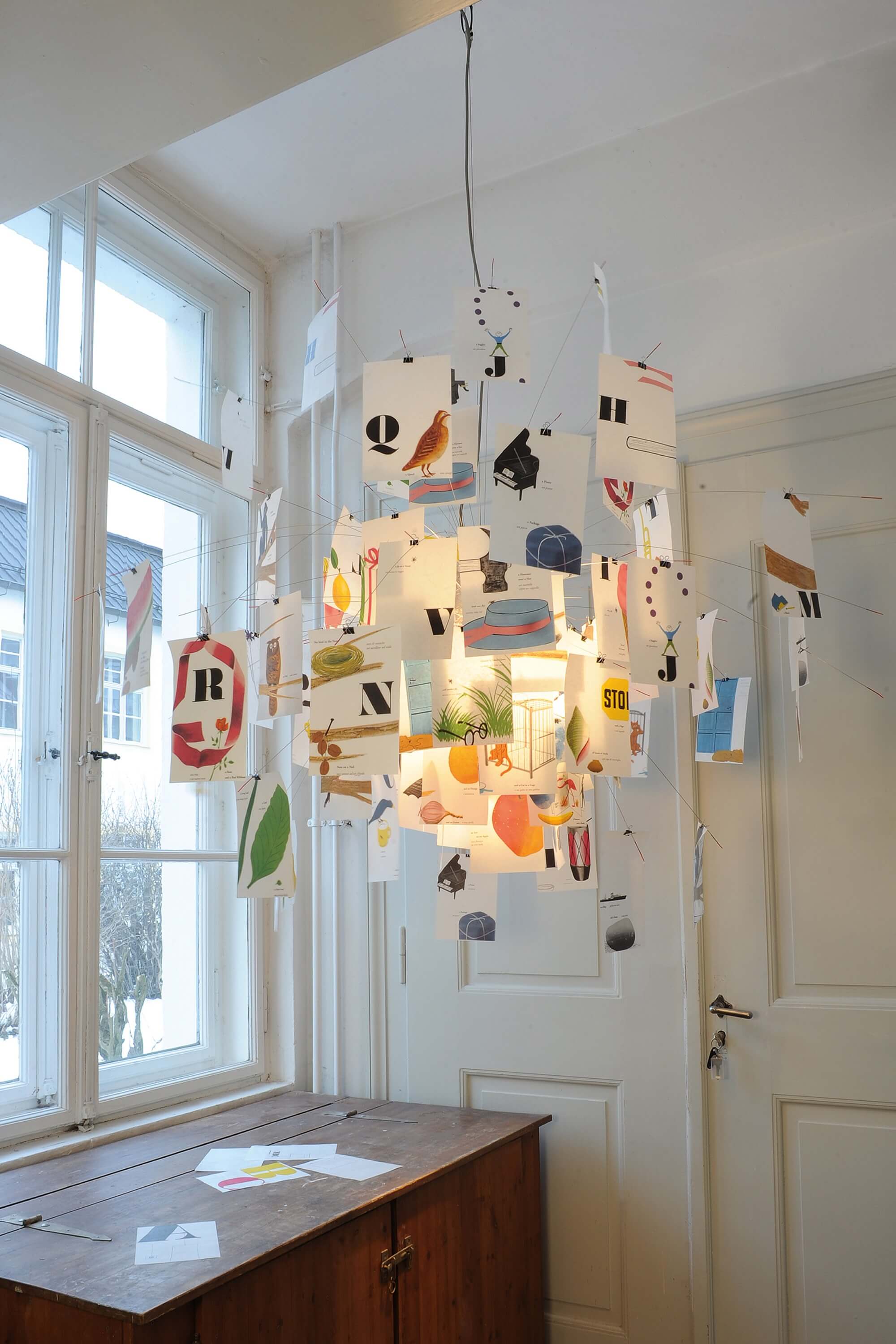 The Zettel’z collection, which includes Zettel’z 5 from 1997 (left) and a much more recent tribute to Bruno Munari (right), is made with stainless steel, heat-resistant satin-frosted glass and Japanese paper. In the original, the paper sheets include 31 printed pieces and 49 blank ones that invite the user to sketch or write on them. The Munari edition features the Italian design icon’s illustrated alphabet, reprinted with graphics from Bruno Munari’s ABC, published in 1960. 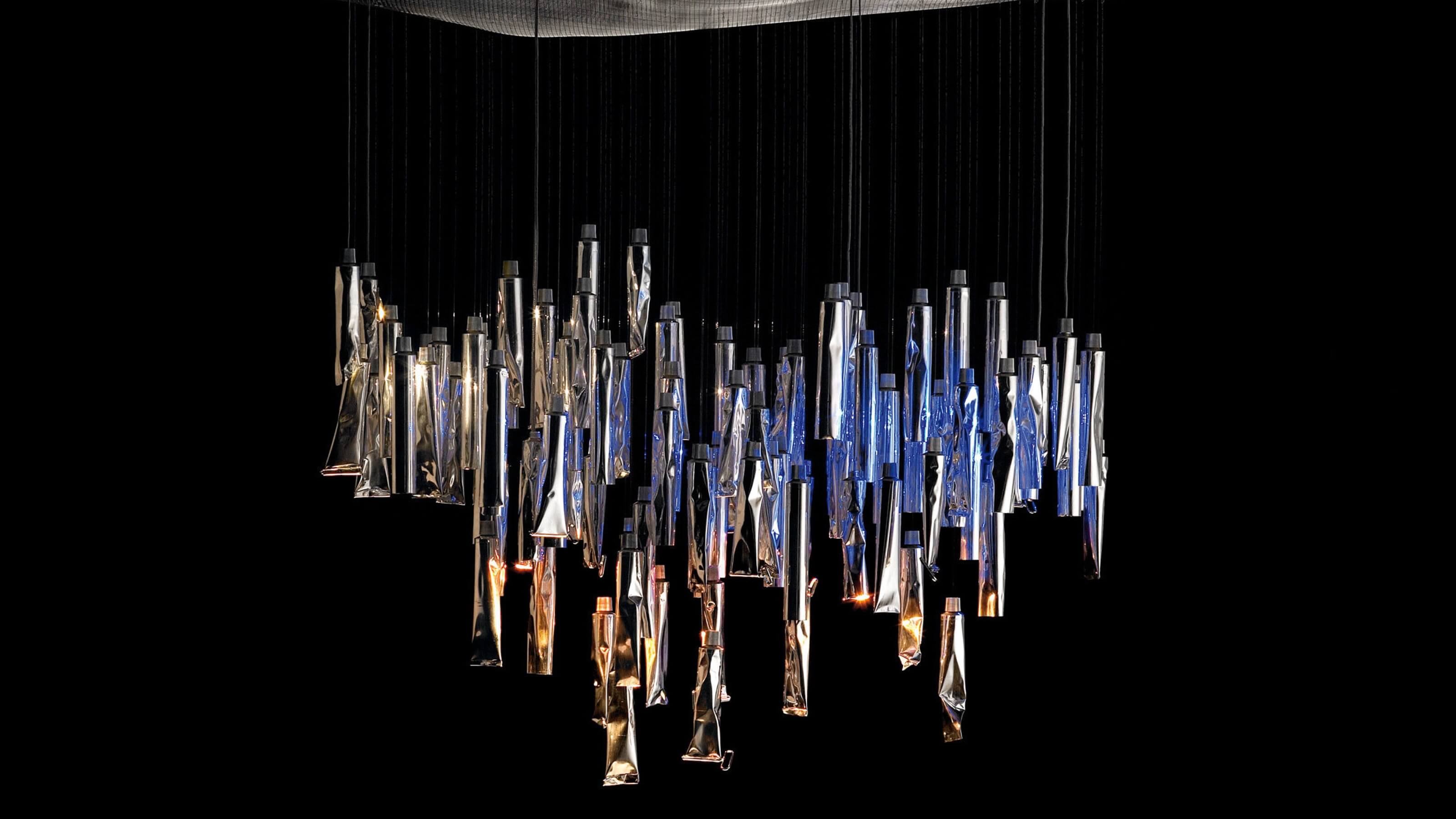 Maurer collaborated with Ron Arad, a master of bending metals to his will, on Tu-Be Lüster. Debuted in 2007, the fixture suspends 93 aluminum tubes from a ceiling plate; together they subtly reflect, refract and diffuse light. 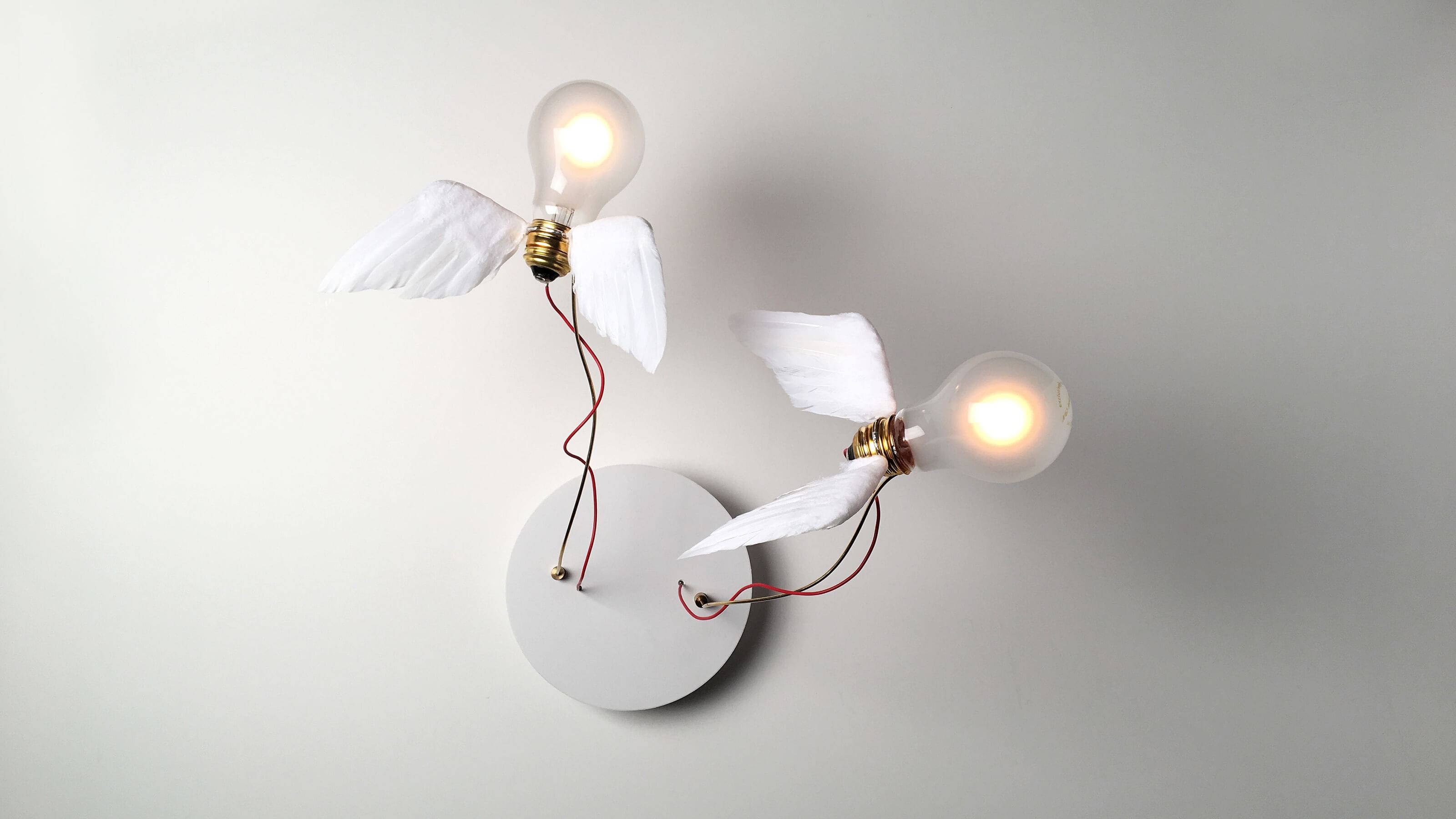 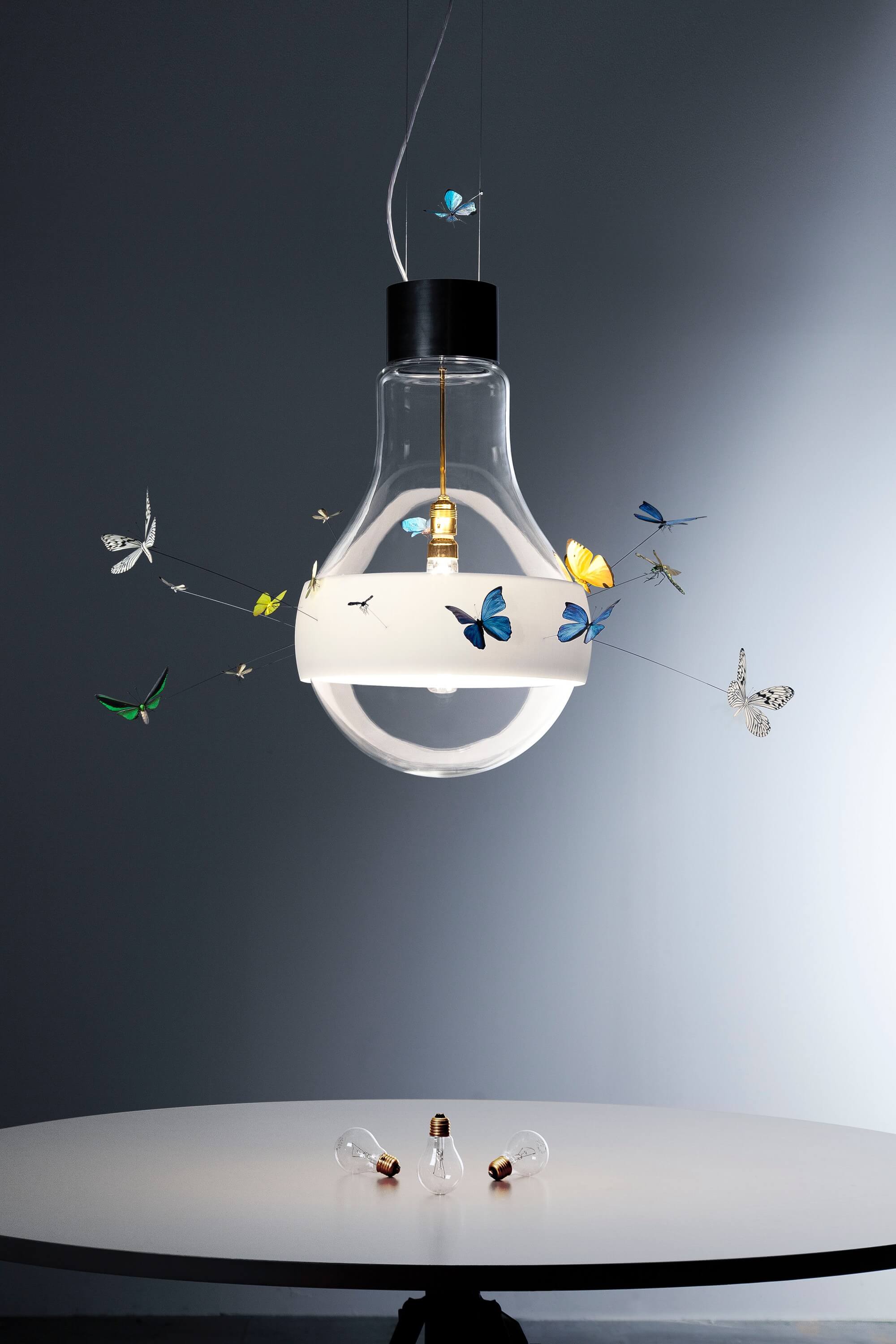 For Maurer, the birds and the butterflies belonged together. Butterflies Dreaming, from 2018, makes a big impression – at 40 cm in diameter and 70 cm in length – for such a simple design. Its mouth-blown Murano glass orb is encircled by hand-made butterflies. 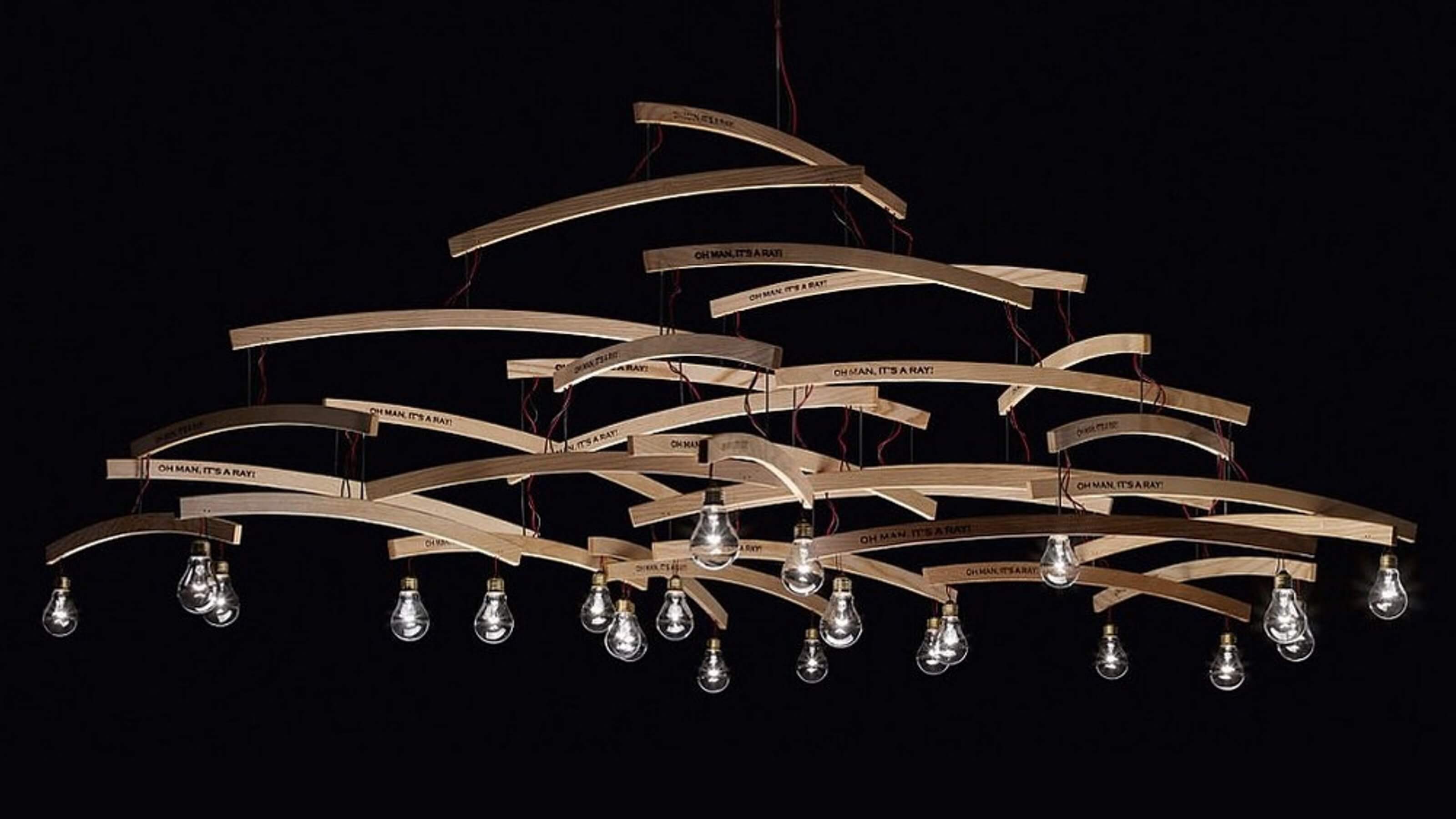 A mobile created in homage to legendary photographer Man Ray, this piece debuted in 2009. It formed part of Maurer’s explorations when he was working on the rooms for a classic Wilhelminian-style building. In this regard, it also reflects his work in transforming entire interiors with his designs and installations, as he recently did in an ancient winery in Georgia. 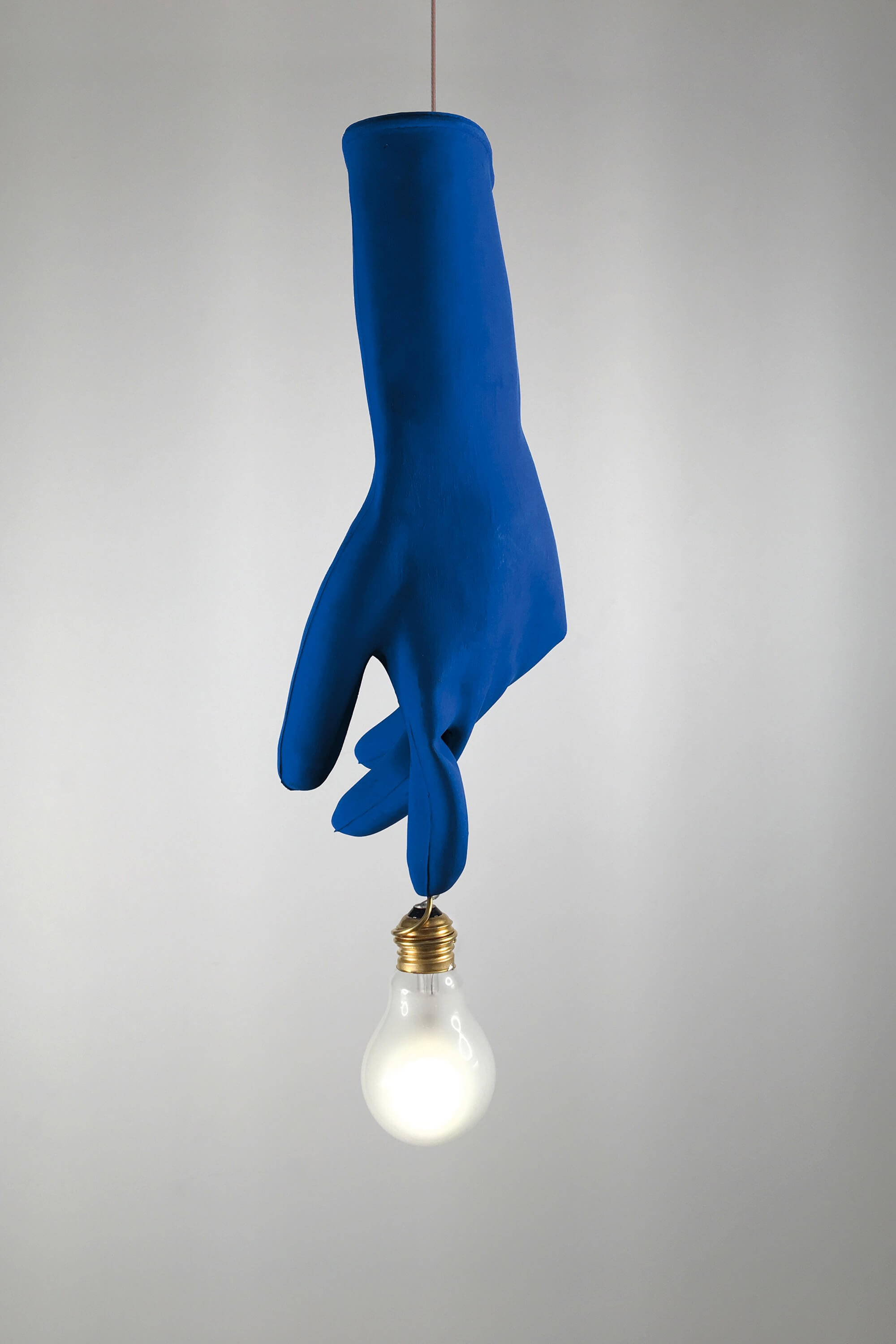 This wacky design was unveiled at Light + Building 2018 and comes in a version with multiple fingertip bulbs. Like Porca Miseria! almost a quarter century earlier, the fixture uses a mundane object – the rubber glove – to challenge the slickness of most contemporary design. Or, as Ingo Maurer put it, “Controversial, free of restrained thinking and the boredom of the ubiquitous repetitive designs.” 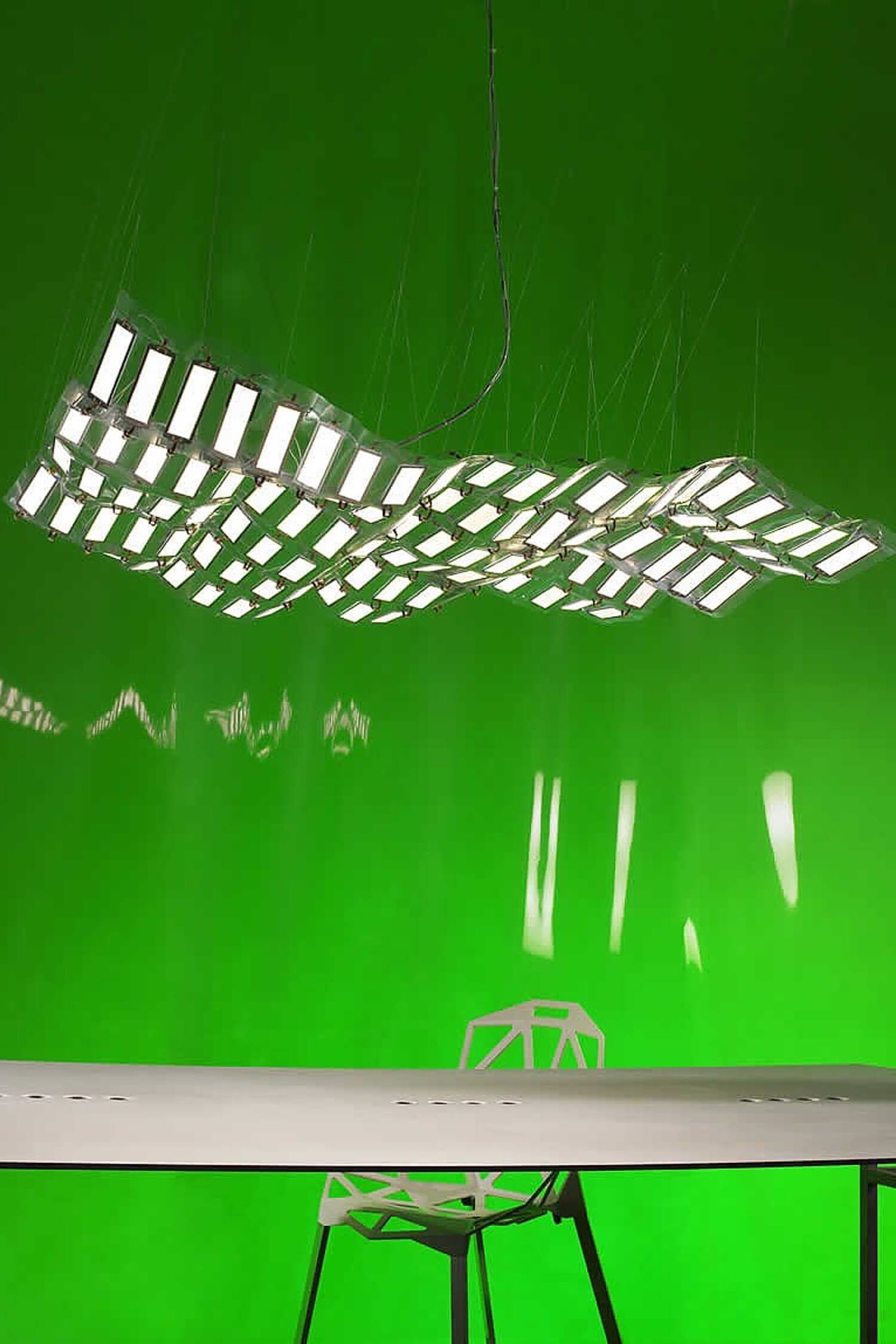 In 2006, Maurer explored the then-nascent technology of organic LEDs. Working with OLED modules by Merck, he created a series of fixtures that shape the flat, flexible material into various forms, including the Flying Future “experimental lighting object” seen here. In 2008 and 2010, he adapted Flying Future with modules by Osram Opto Semiconductors and Novaled. 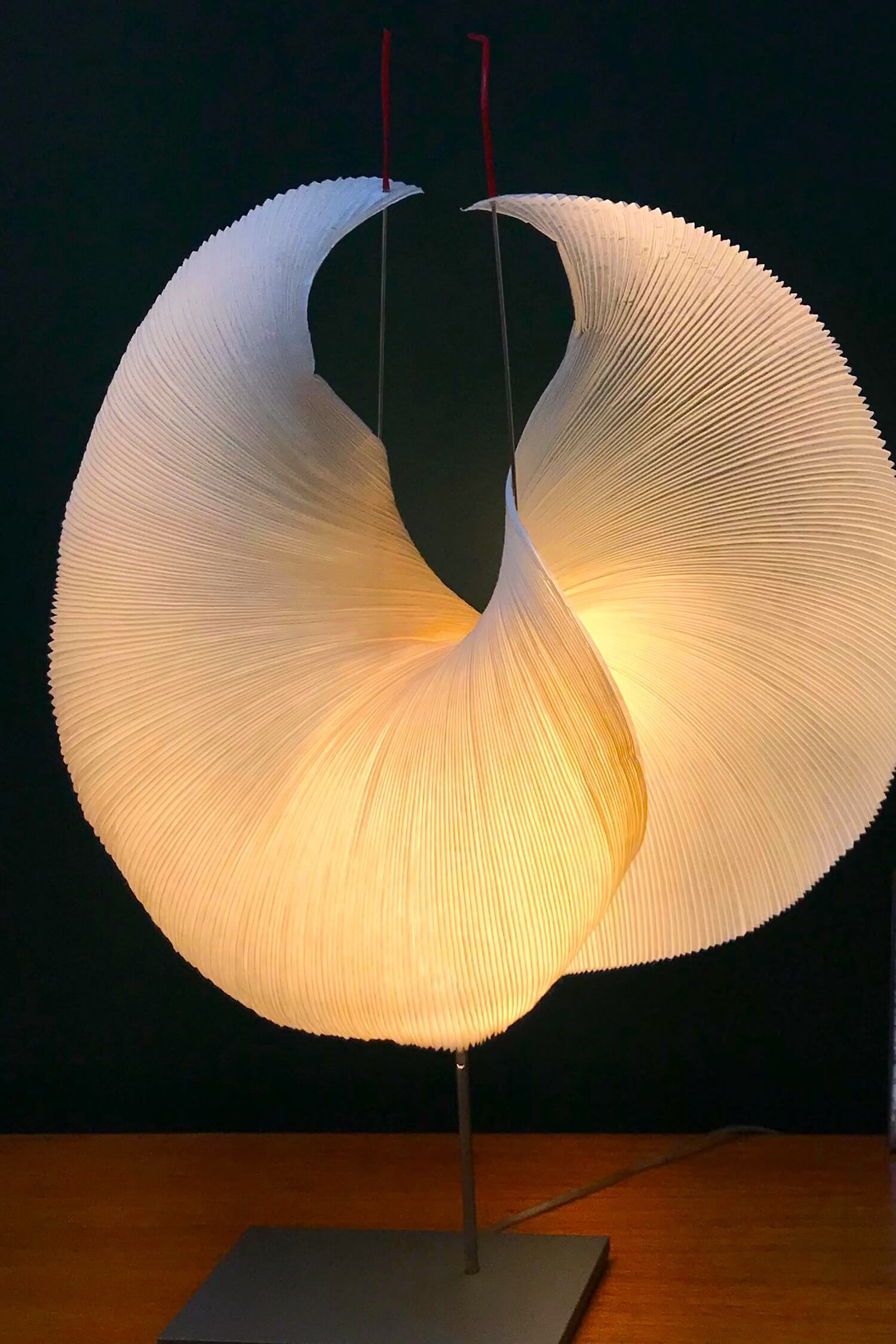 A collaboration with Dagmar Mombach, Yoruba Rose from 2017 is inspired by Japanese lanterns. It features a sheet of paper, which has undergone a special manufacturing process in Mombach’s studio, stretched into a circular form by light metal wires. Though the light source is LED, the paper’s warmth gives the illumination a deeper diffusion more akin to incandescent. 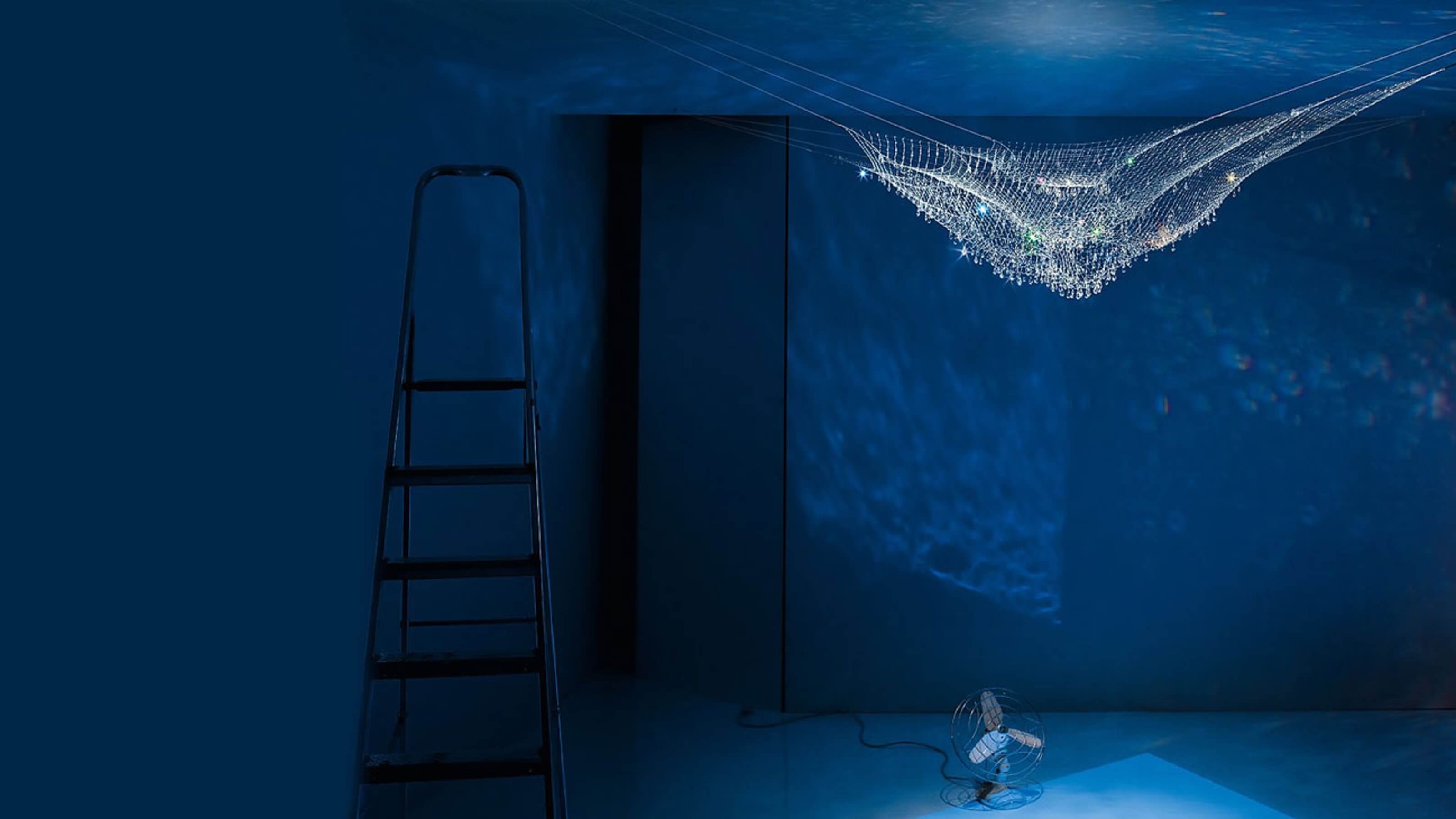 Lacrime del Pescatore (Italian for “the fisherman’s tears”) is a romantic ceiling-suspended fixture made with three layers of variously sized nylon nets dripping with 385 crystals. It debuted in 2009. Ten years later, the tearful piece is especially poignant on the occasion of Ingo Maurer’s passing. Poetry, beauty and romance – Maurer gave his work everything.

German lighting designer Ingo Maurer has died – but his light lives on. These 10 pieces shine brightest.