10 Towers in Scary Movies
Happy Hallowe'en! Azure presents a roundup of 10 skyscrapers and high rises that take a starring role in scenes of horror and suspense. 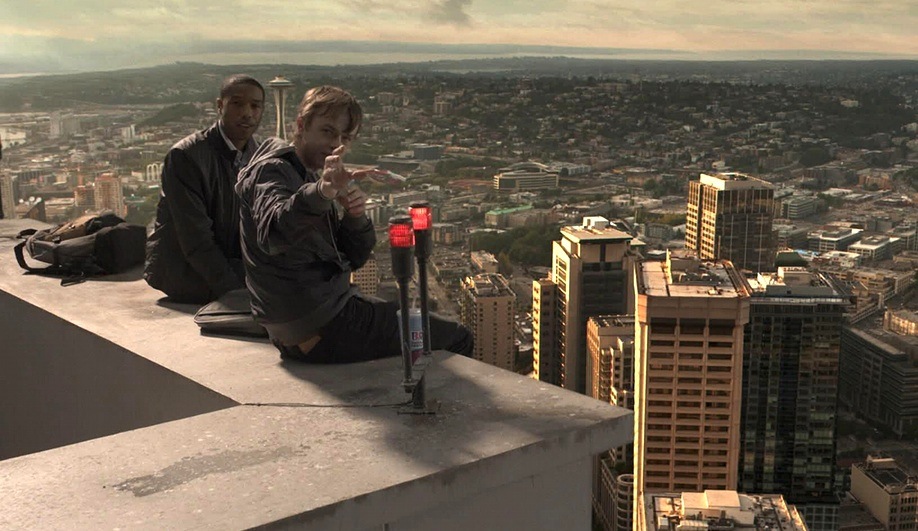 When we listed 10 Modernist Houses in Scary Movies, featuring a selection of beautiful homes from around the world, a pattern emerged: each of these houses was located in a natural setting, remote from civilization, and often cantilevered over a steep hill. This geographical detachment often figures into the story, and the homes are cast with an unfriendly sterility that can add to a chilling, agoraphobic atmosphere.

Skyscrapers, on the other hand, occupy only the densest urban zones. Rather than antisocial and aloof individuals, they often house the headquarters of the “Evil Corporation.” Or, in films where the subtext explores social issues surrounding urban development, towers are the site and symbol of existential threats from poverty and crime to the loss of identity.

Whatever they bring to the screen, these towers always cast a striking profile. 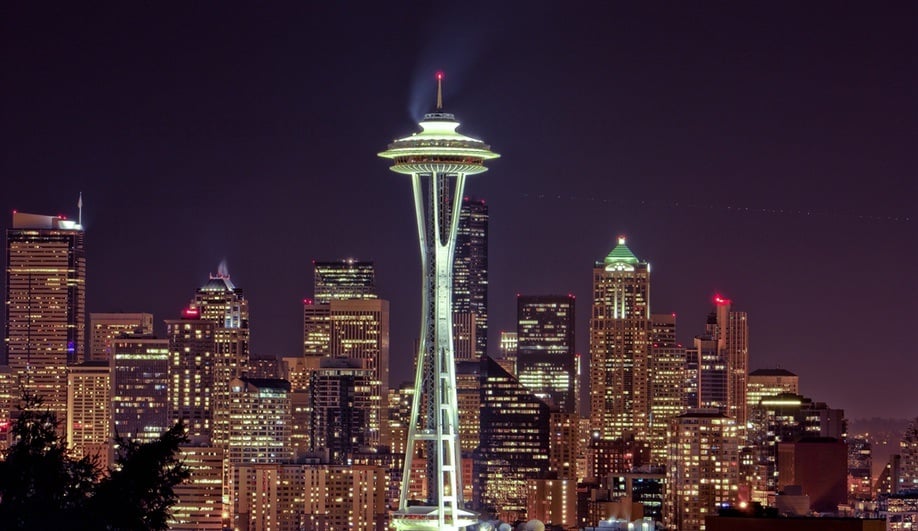 1 Space Needle, by John Graham and Company (Chronicle, 2012)
Perhaps the makers of Chronicle put Seattle’s Space Needle in a starring role because they prized the moody, overcast skies of the Emerald City – or perhaps it was the last remaining architectural icon to have escaped the honour of being destroyed on-screen. But after a trio of super-powered teens are unleashed on the city, John Graham’s futuristic masterpiece, completed in 1962 for the World’s Fair, is never quite the same. Not since King Kong has a tower received this kind of cinematic attention. 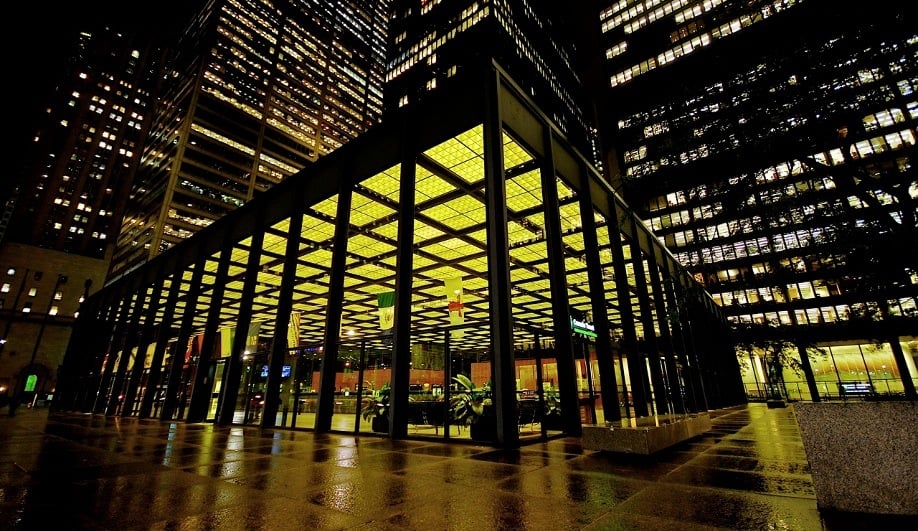 2 Toronto-Dominion Centre, by Ludwig Mies van der Rohe (American Psycho, 2000)
Patrick Bateman – investment banker by day, serial killer by night – is a threat to the American people in more ways than one. Astute viewers will recognize Bateman’s office building not from New York but from Toronto; it’s Mies van der Rohe’s TD Centre, whose steel and glass pavilion is considered among the finest examples of the International Style. 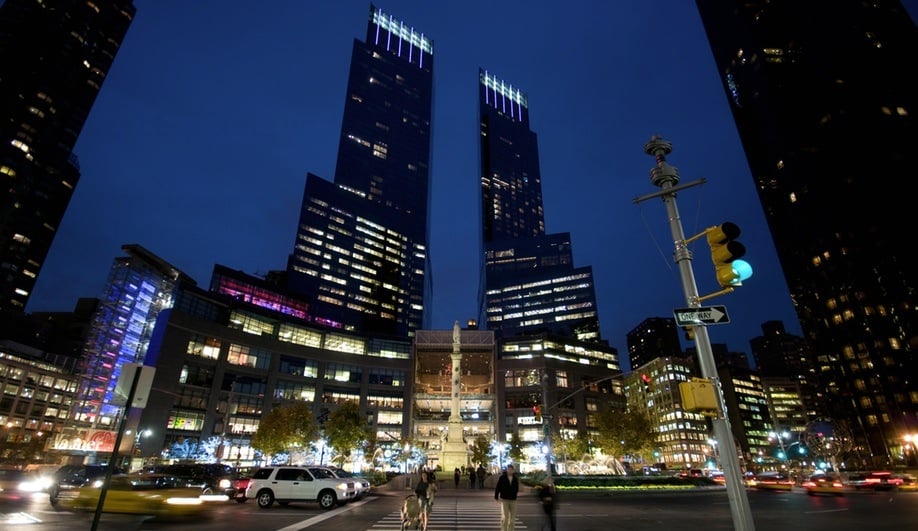 3 Time Warner Center, by Skidmore, Owings & Merrill (Cloverfield, 2008)
It’s no surprise that alien apocalypse flick Cloverfield ultimately depicts the Time Warner Center, located in New York City’s Columbus Circle, like so many other towers on this list: crumbling into a heap of rubble. But SOM’s bookend skyscrapers play a special role here, as the set-piece for one of the most nail-biting alpine rescues in recent history. 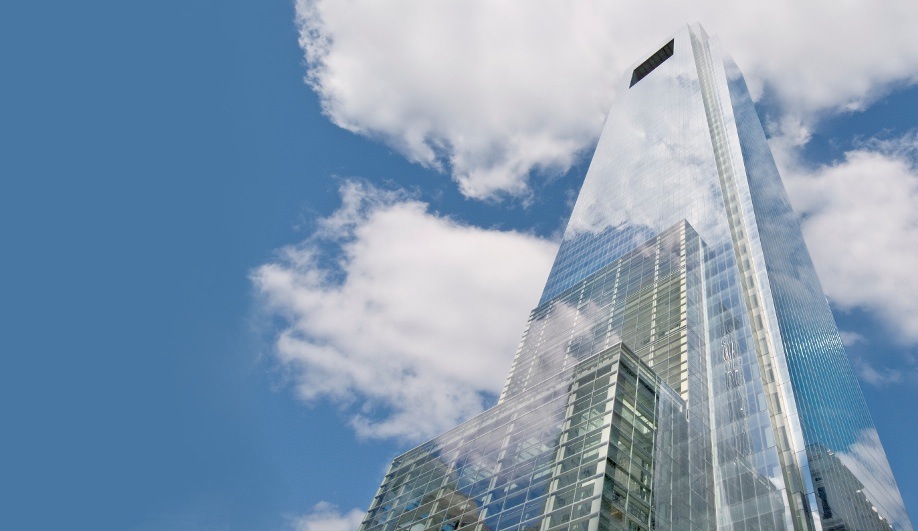 4 Comcast Building, by Robert A. M. Stern Architect (Devil, 2010)
There’s no denying that something devilish is at work inside this commercial tower when four strangers are trapped in an elevator with an unseen killer. Maybe it’s the low camera angle that makes Comcast’s Philadelphia HQ look impossibly tall, or maybe it’s the iciness of the mirrored facade, but in the hands of Devil’s cinematographers, there’s something unmistakably sinister about this pristine edifice. 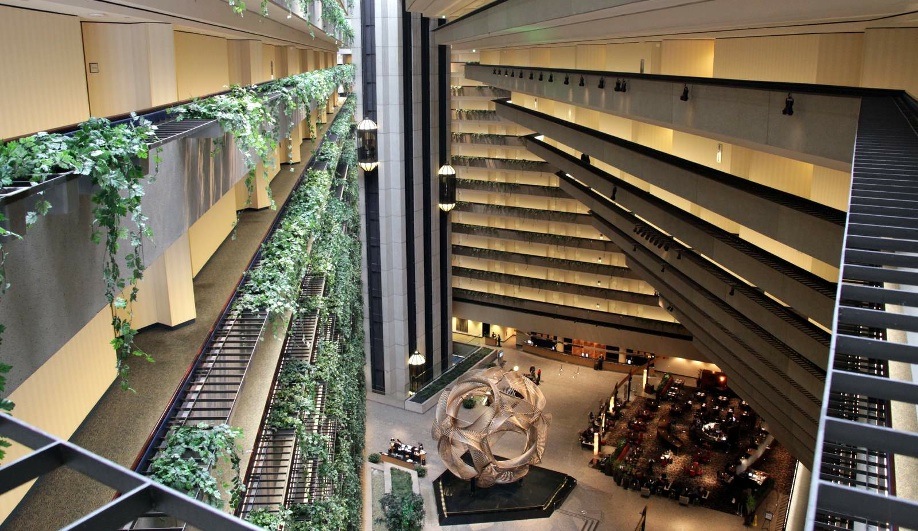 5 Hyatt Regency San Francisco, by John Portman & Associates (The Towering Inferno, 1974)
The Towering Inferno’s titular skyscraper – the granddaddy of all cinematic tower-themed disasters – was assembled from multiple locations, including 555 California Street in San Francisco, which provided the entrance exterior, and a Century City office building in LA, which stood in for the surveillance room. But most striking of all is the building’s tapered lobby, actually John Portman’s famous Hyatt Regency in San Francisco, which had opened the preceding year, and has appeared in several high-profile films since. 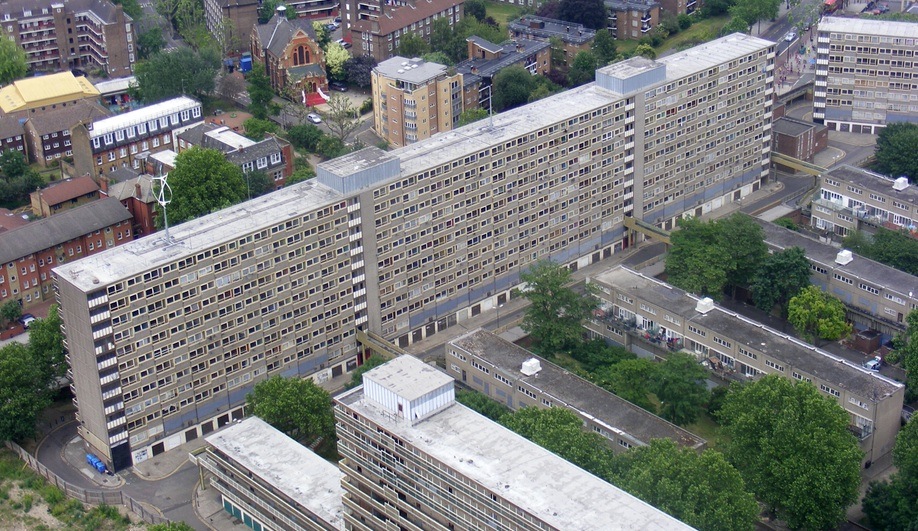 6 Heygate Estate, by Tim Tinker (Attack the Block, 2011)
2011’s Attack the Block, the saga of a group of toughs in a south London council estate fighting off an alien invasion, is destined to become a horror classic. But the social issues at the heart of the film – the street crime and poverty endemic to social housing – are no fantasy to the residents of south London’s Heygate Estate. The area was already notorious for muggings in 2011, when demolition of the residences commenced in order to make room for neighbourhood regeneration projects. 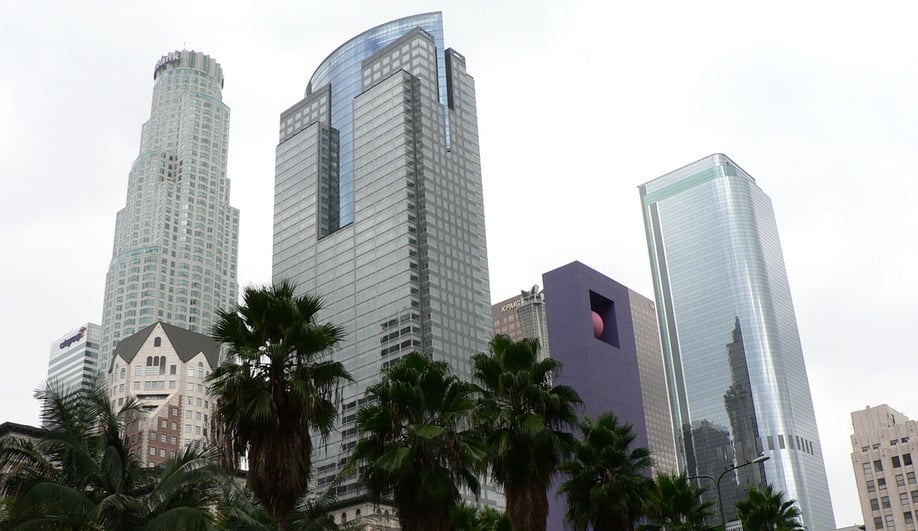 7 Gas Company Tower, by Skidmore, Owings & Merrill (Speed, 1994)
For those who can remember this 1994 Keanu Reeves vehicle, the name Speed is synonymous with an out-of-control bus. But the film’s action begins with a tense elevator-related emergency, shot in a studio, but using the exterior of SOM’s Gas Company Tower in Los Angeles to establish the location. 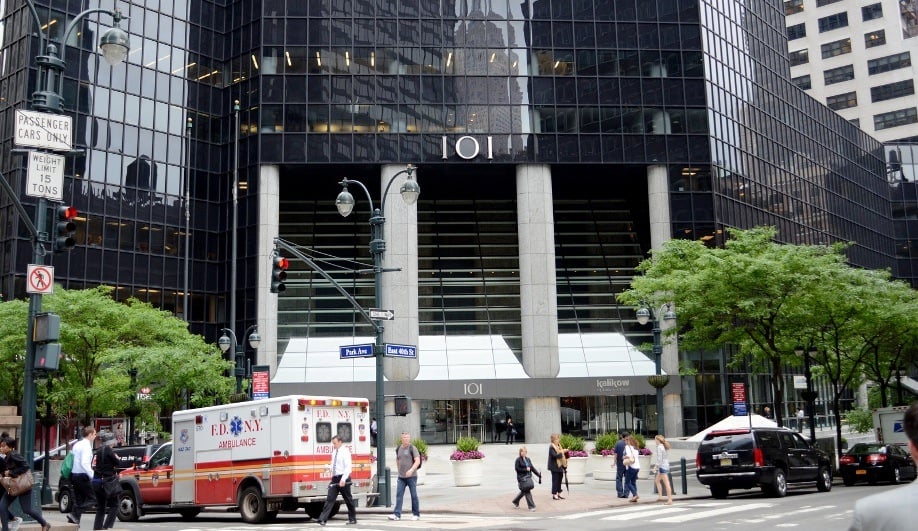 8 101 Park Avenue, by Eli Attia Architects (Gremlins 2,1990)
Before it was leveled in 2012’s The Avengers, 101 Park Avenue in Manhattan played the home of Clamp Enterprises in Gremlins 2: The New Batch. The thoroughly automated research centre seen in the film can be entirely quarantined – luckily, as the experiments’ subjects soon get out of hand. Today, Eli Attia’s imposing office tower is home to several notable tenants including Morgan Stanley and Nespresso. 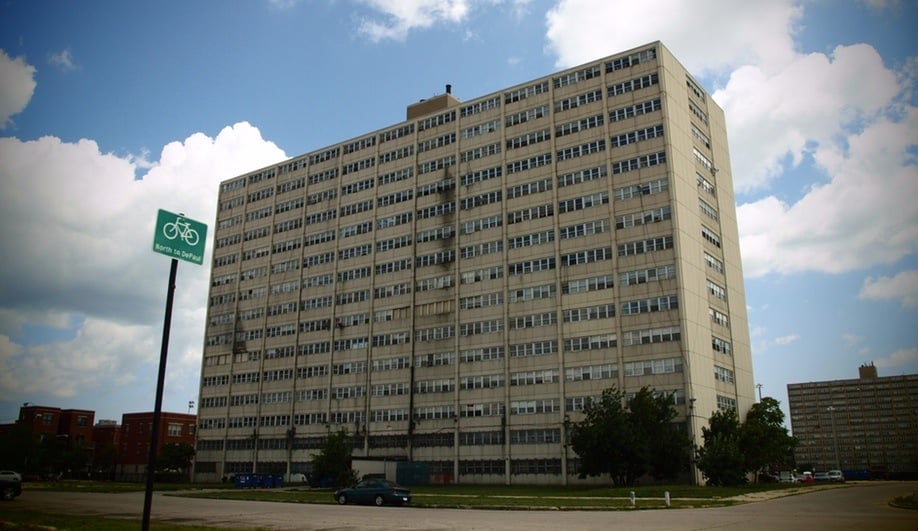 9 Cabrini-Green Housing, by the Chicago Housing Authority (Candyman, 1992)
When Chicago’s Housing Authority initiated the Frances Cabrini row houses and William Green homes beginning in the 1940s, the proposal was based on the urban renewal model en vogue at the time: a dense mix of high-rises and row houses that would integrate people of diverse incomes into an area between two of Chicago’s most affluent districts. Instead, the area swiftly descended into vandalism and decay, with clogged garbage chutes sometimes backing up 15 storeys, attracting rats and roaches. By the 1970s, the project was synonymous with gang-related crime.

Before the last of these structures was demolished in 2011, the neighbourhood provided an authentically dilapidated backdrop for Candyman, a supernatural thriller that uses urban legends as the jumping-off point for a gory and disturbing tale of an angry spirit who terrorizes an entire community. 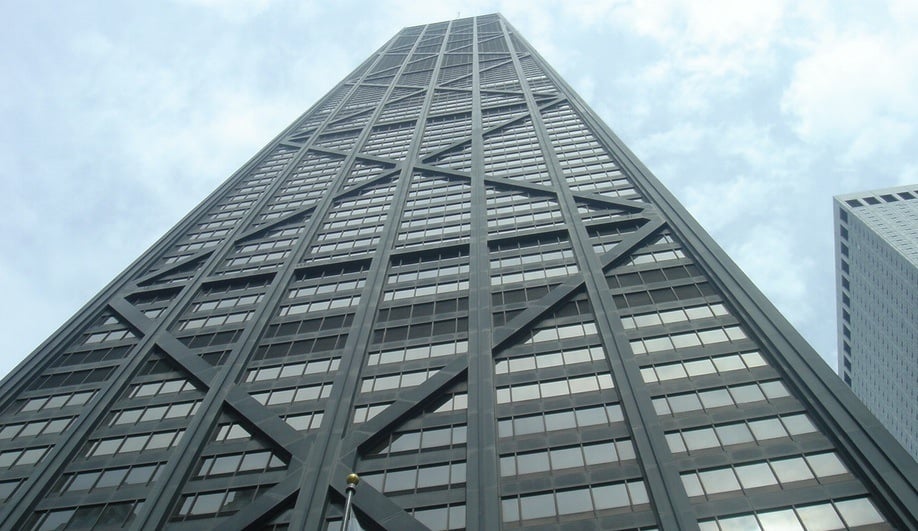 10 John Hancock Center, by Skidmore, Owings & Merrill (Poltergeist III, 1988)
Poltergeist and its first sequel fixated on the anxiety and ennui of life in the suburbs, but the third installment transported beleaguered daughter Carol Ann to her aunt and uncle’s apartment in Chicago. SOM’s John Hancock Center, which provided the apartment’s exterior, was the world’s second-tallest structure upon completion in 1969. While it has never been haunted, to our knowledge, it has seen its share of tragedy: in 2002, wind gusts caused scaffolding to shake free from the building and fall 43 storeys to the street below, crushing several cars and killing three people.