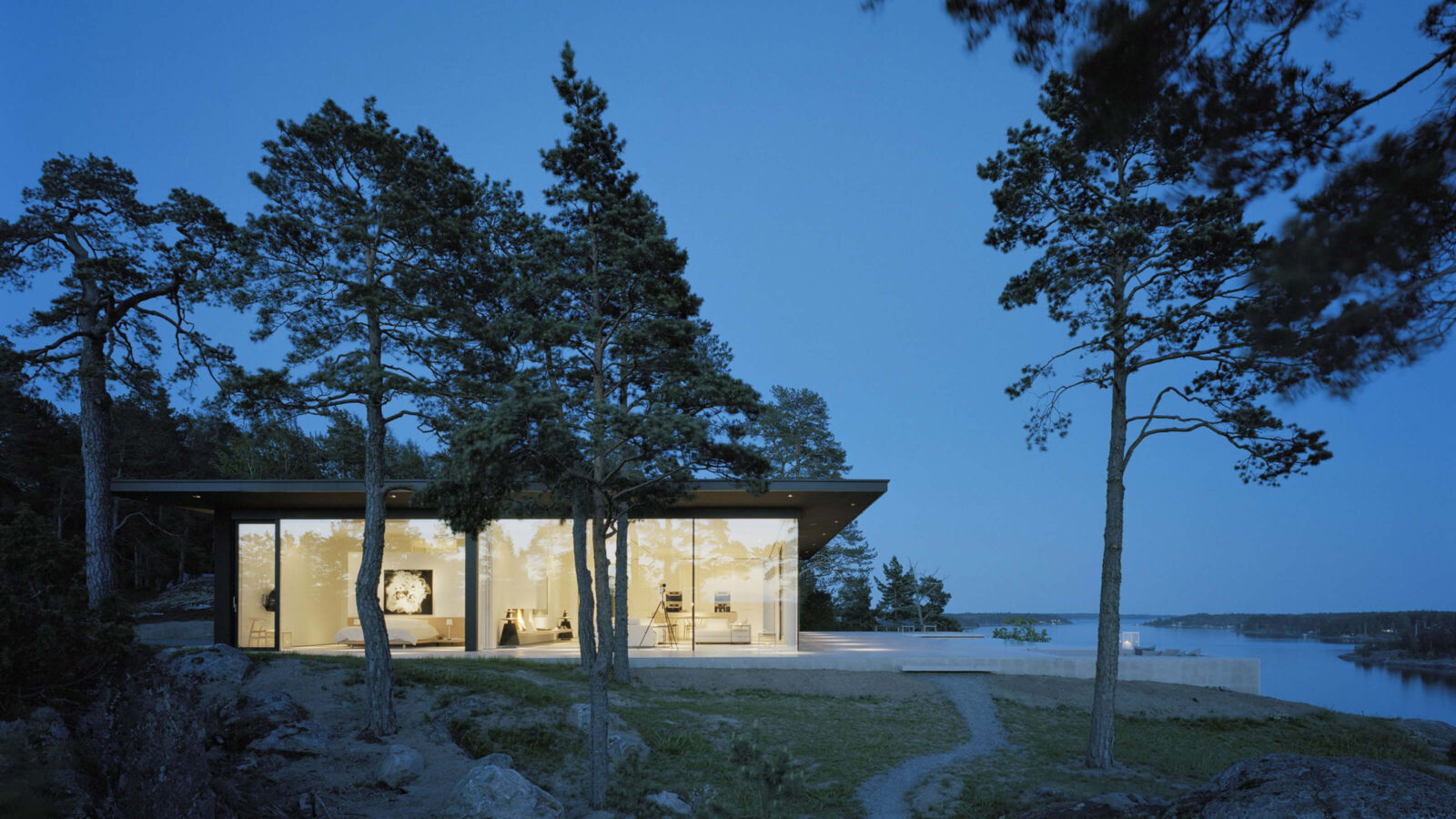 Fans of suspense know that atmosphere is everything. Just in time for Halloween, Azure has gathered the top 10 modernist houses that serve as the sinister backdrop for thrills and chills on film.

Maybe it has something to do with Modernism’s bad rep – the unfriendly, antiseptic vibe that the style just can’t shake – that whenever you see a glass and steel house in a movie you can be sure that there’s something blood-curdling going on inside.

If most people are subconsciously drawn to curves, then much of modernist architecture turns its cold, angular shoulder on us, and offers no cozy, fuzzy respite, with its concrete finishes and colour-starved minimal decor. And while the works of John Lautner and Skylab Architecture might make design-lovers swoon, in film the archetype of the ultra-modern house gives the crumbling manor on the hill a run for its money as a symbol of antisocial psychosis. We still love these 10 bold abodes – some real, some invented – even if, in the right moonlight, they scare the bejesus out of us.

1
Överby, by John Robert Nilsson (The Girl With the Dragon Tattoo, 2011) 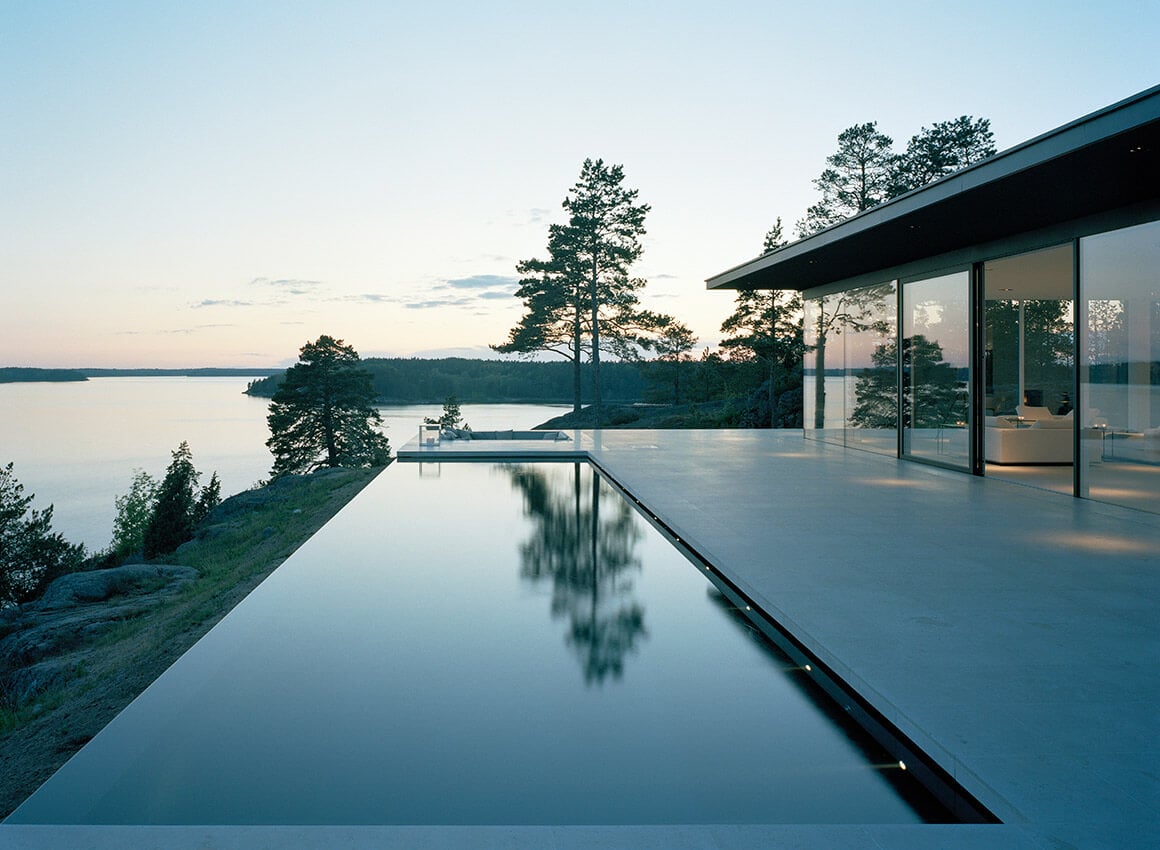 Director David Fincher’s cinematic version of Stieg Larsson’s hit suspense novel stayed true to the source and shot principally in Sweden. For the home of Martin Vanger (Stellan Skarsgård), the team chose Nilsson’s Överby summer home, a getaway in Värmdö, one of the many islands outlying Stockholm. To contrast with the rustic setting, the house is formed from a small palette of refined materials: plaster, steel, white ash wood, limestone from nearby Gotland and, of course, floor-to-ceiling glass, which suggests that the residents have nothing to hide.  jrn.se 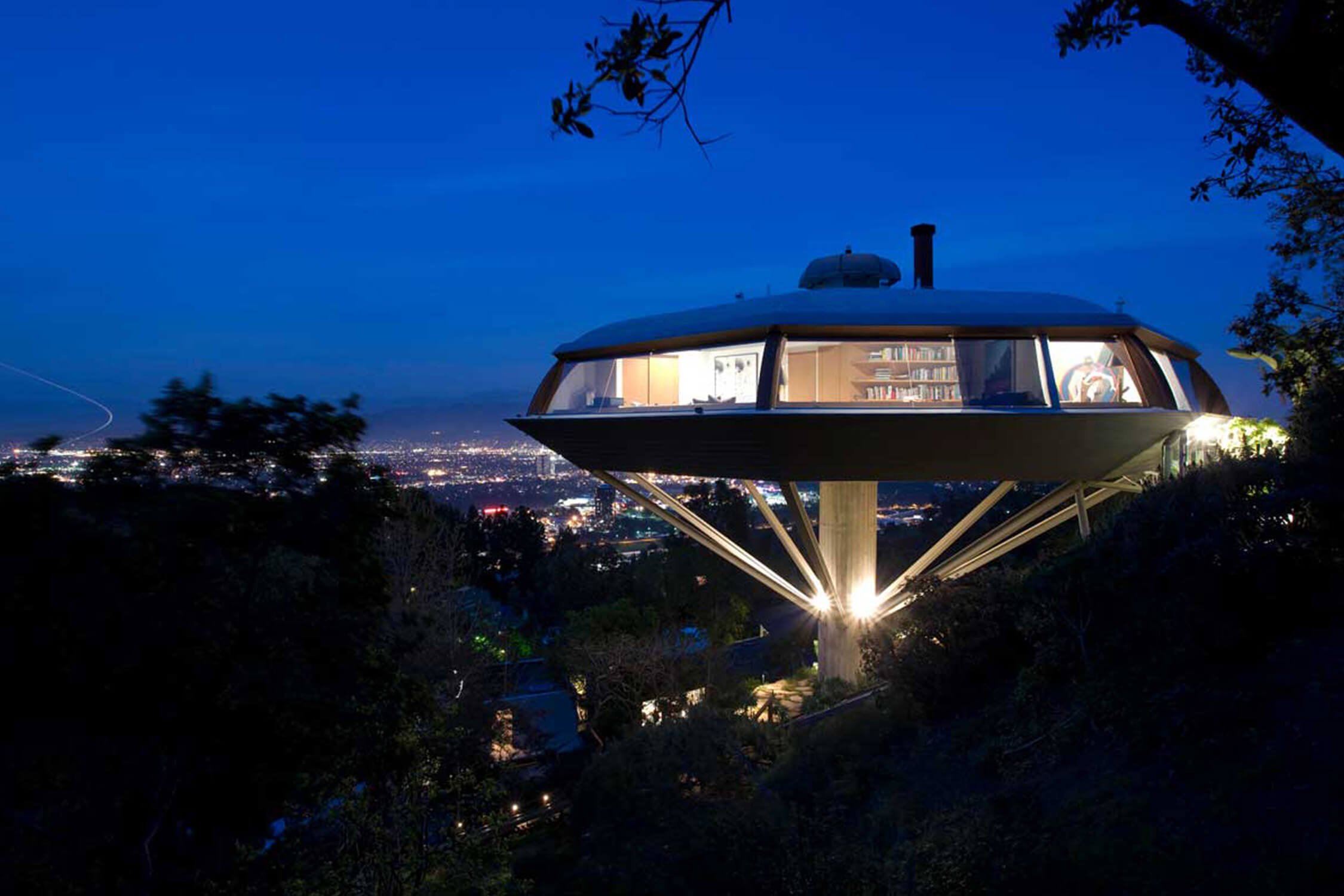 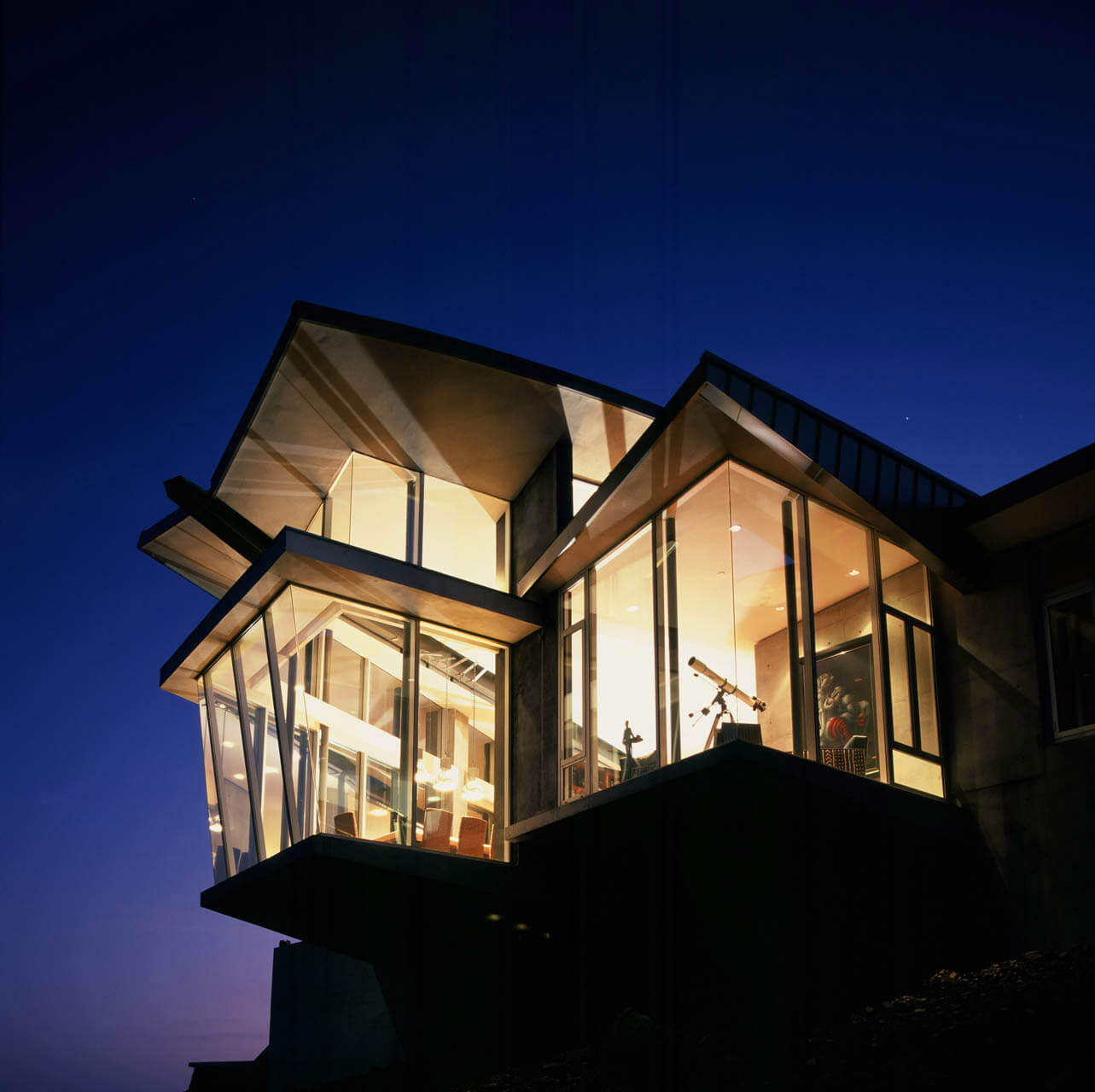 When orphaned teens Ruby and Rhett are sent to live with their former neighbour (Stellan Skarsgård again!) in his sprawling Malibu home, things quickly go downhill, so to speak. The glass and steel house was designed by Belzberg Architects, the firm behind the Los Angeles Museum of the Holocaust, and cantilevers over a remote stretch of Mulholland Canyon. To achieve a solid foundation on the rocky outcroppings, each boulder was individually surveyed, and these determined the foundational points for the house’s floor plan, allowing the house to settle into the existing landscape and hide from view.  belzbergarchitects.com 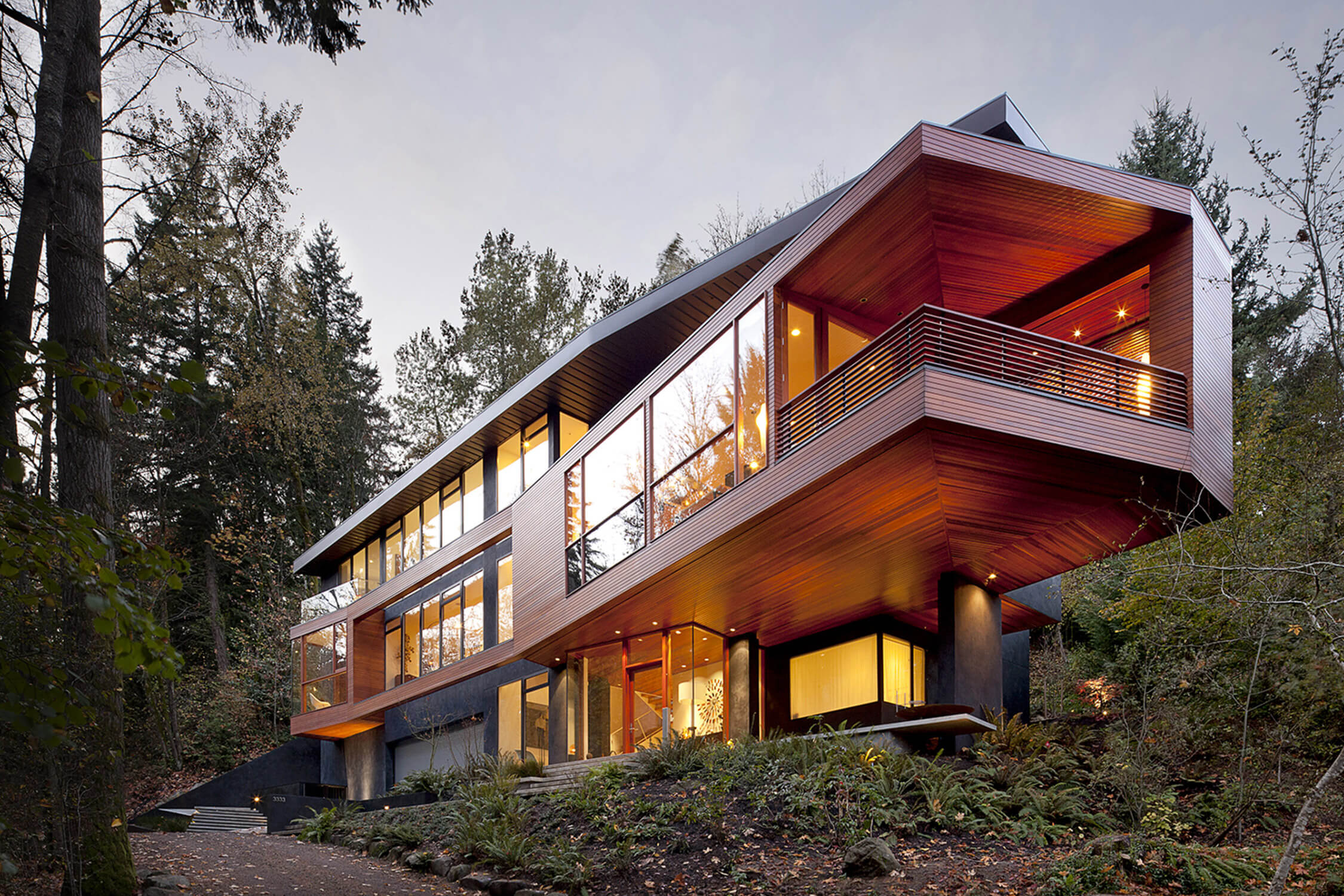 There’s a running joke about vampire flicks constantly changing the vampire rules, and in the case of Twilight, it turns out that the blood-sucking undead prefer viewfinder-like homes with well-appointed architectural details. Situated in Portland, the Hoke house is named after owner John Hoke, director of footwear design at Nike; it was originally designed on spec, but it established Skylab, which just finished the W Hotel in Seattle, as one of the West Coast’s most inventive firms. Not that Bella would know.  skylabarchitecture.com 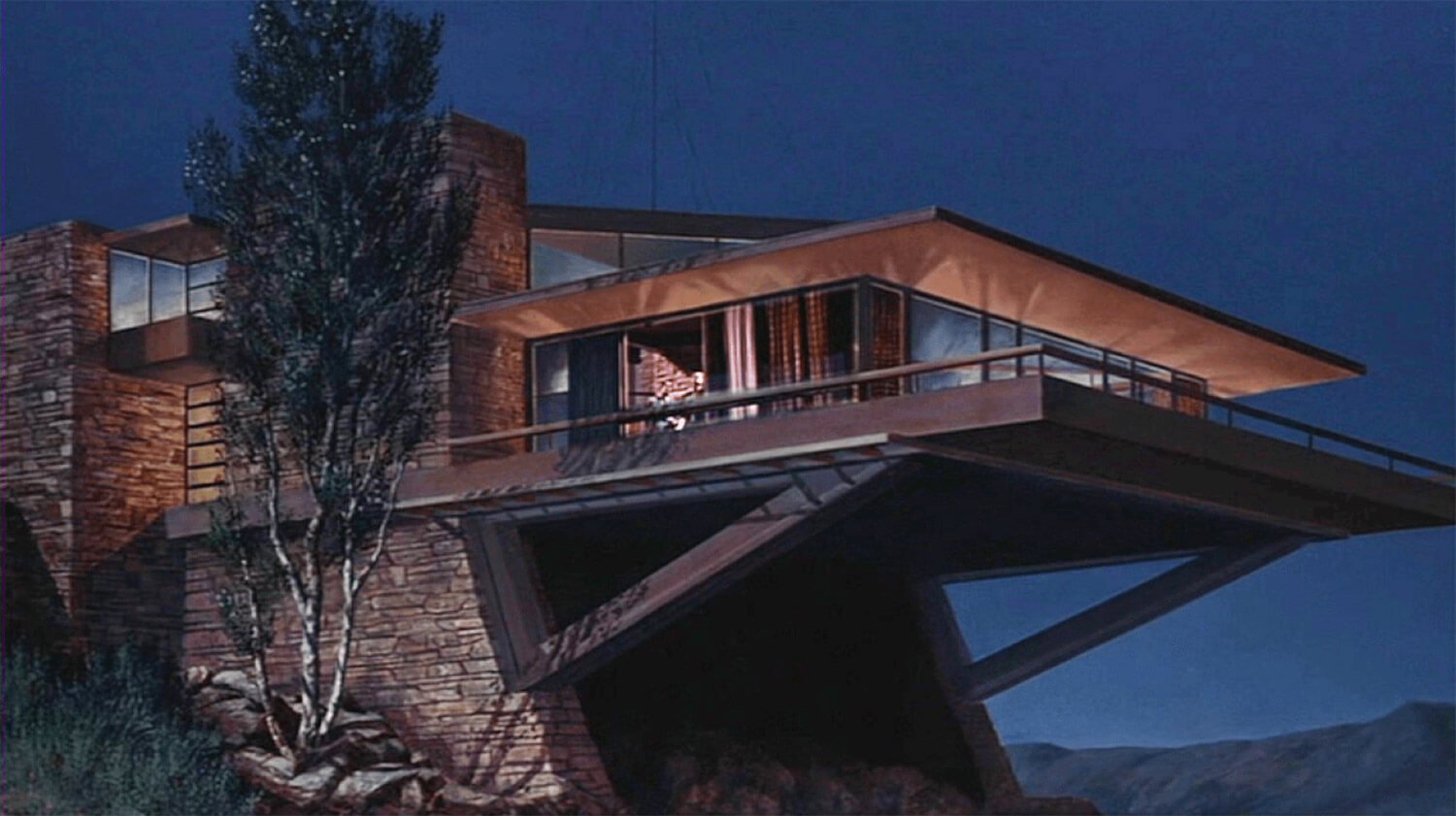 Hitchcock can squeeze a lot of drama out of a one-room set. But his most titillating films zoom out of the claustrophobic room, and onto the winding hills of Vertigo’s San Francisco, say, or the apartment buildings of Rear Window, erected on a Paramount Studio soundstage and made to resemble New York. That film’s verisimilitude should be a clue for anyone who’s tried to look up the house that Cary Grant scales in search of Eva Marie Saint in North by Northwest, its jutting volumes rivalling those of its rugged site. The cliff-hanging exterior (actually a matte painting) was modelled on Frank Lloyd Wright’s Fallingwater, and the interior set was built from scratch by MGM set designers. 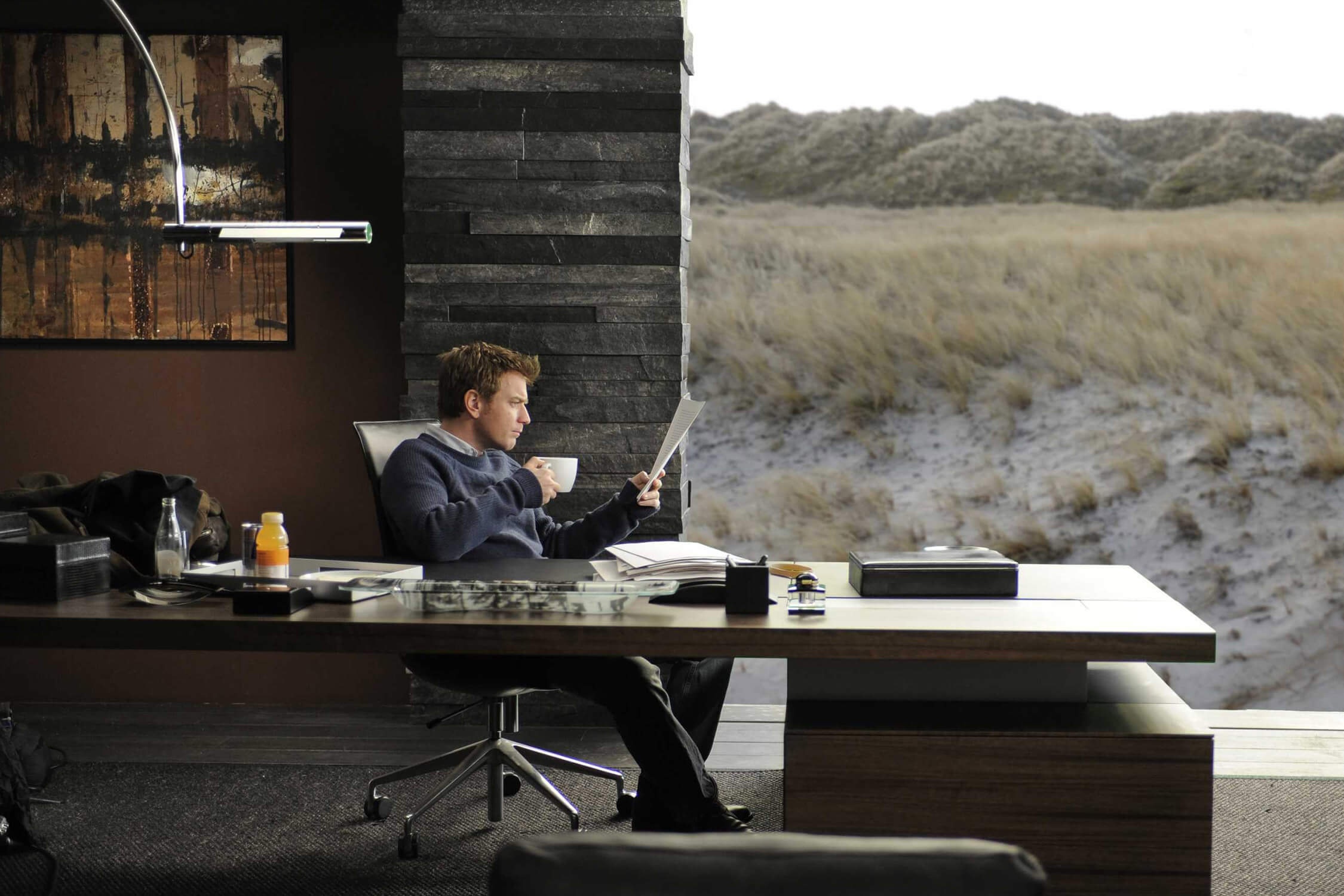 Roman Polanski has also done some custom-design work. In fact, for the home central to the plot of The Ghost Writer, the bunkerlike facade and the Walter Knoll-furnished interior were built on two separate locations in Germany. The set’s sophisticated architecture includes expanses of glazing, through which Ewan McGregor’s titular biographer can stare at the vast landscape (the island of Sylt posing as Martha’s Vineyard) while attempting to unravel what caused his predecessor, a writer penning an authorized biography of the former British prime minister, played by Pierce Brosnan, to mysteriously drop dead. 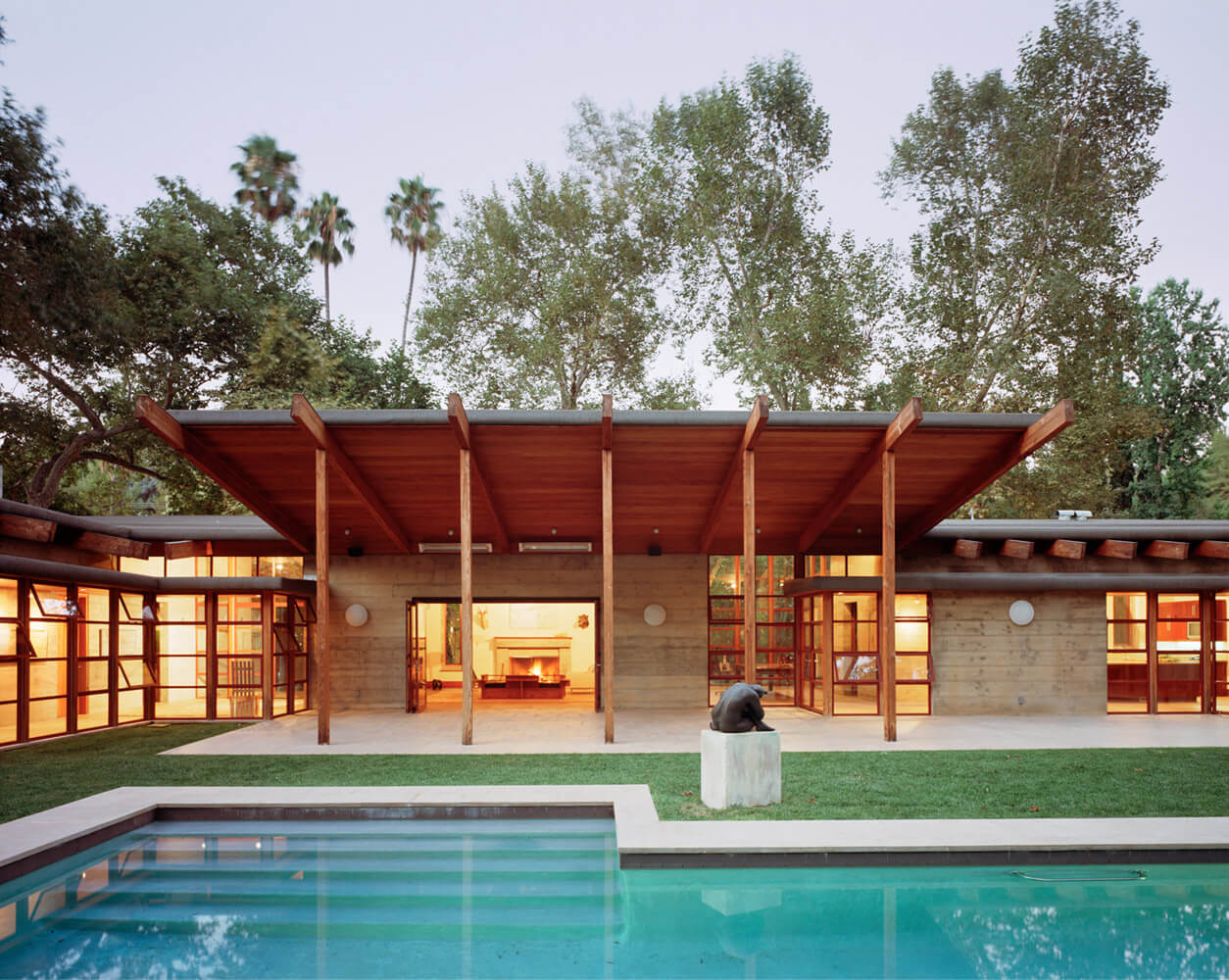 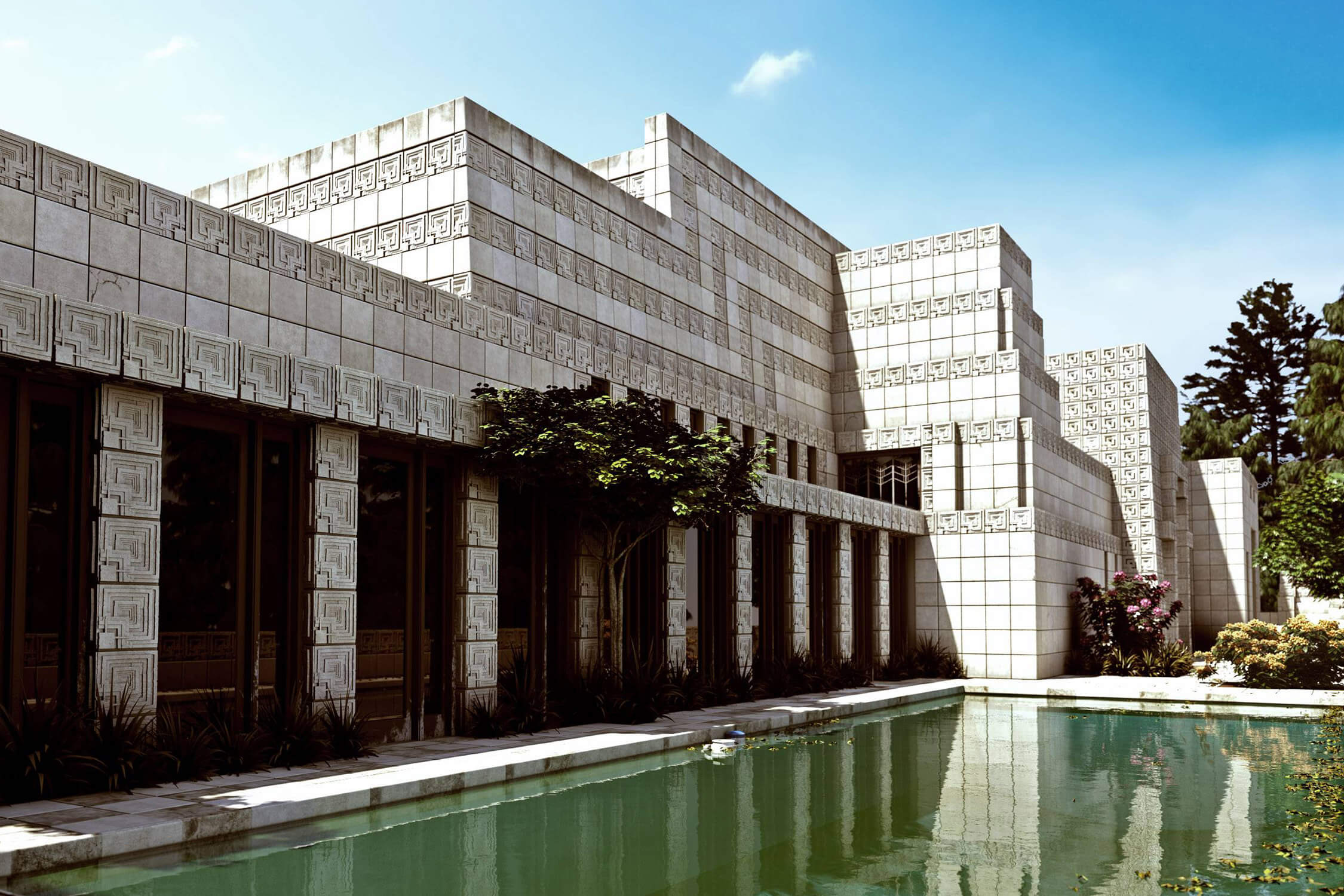 The titular house of this horror classic provides the film’s sole location, where calculating millionaire Frederick Loren (Vincent Price) summons five people to the party that disguises his homicidal scheme. Completed in 1924, Ennis House is considered one of Wright’s masterpieces, but structural problems have plagued the house from the beginning. In 2007, a restoration with a $6.4 million pricetag was completed, to little avail; the house was sold in 2011 for less than a third of the asking price.

Bonus: Among many other roles, Ennis House also provided the exterior of the mansion occupied by evil vampires Spike, Drusilla and Angelus in the Buffy the Vampire Slayer TV series, and the interior of Deckard’s apartment in Blade Runner.  franklloydwright.org 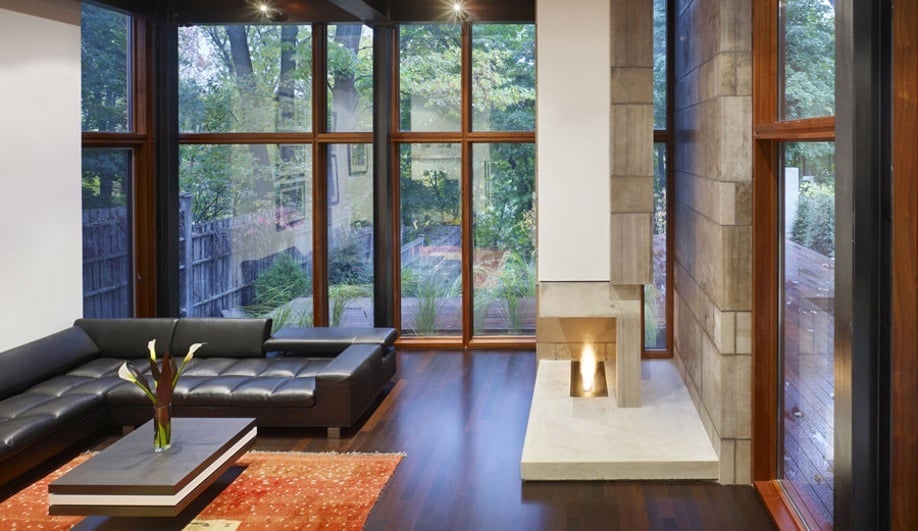 Besides giving Toronto – a city used to playing other cities – its shot at the spotlight, in the eerie Chloe Atom Egoyan also showcases one of its most impeccable residences, the Ravine House. The structure appears from its facade as a collection of framed boxes propped high, yet its ground floor steps down to nestle into its ravine topography. The movie is a meditation on marriage, infidelity and revenge, and its family in a glass house are about to be rocked by a crazy-eyed Amanda Seyfried.  drewmandelarchitects.com 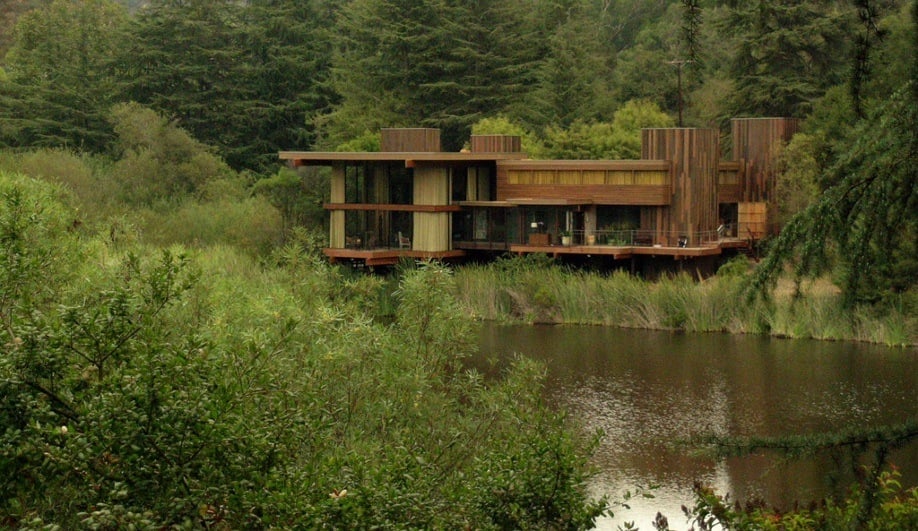 Many a gen-Xer will recall the original When A Stranger Calls, but unlike the urban house of that 1979 spine-tingler, the remake is set in a modernist mansion on a bucolic hill. As teenage babysitter Jill Johnson starts to receive spooky calls from a stranger – “Have you checked on the children?” – she runs up floating wood stairs, takes shelter in a central greenhouse and is terrorized by the intruder’s silhouette against all those translucent surfaces. The real horror: this awesome house is just a set, and doesn’t actually exist.

For more architecture on film, check out 10 Towers in Scary Movies.

This treat was compiled by David Dick-Agnew and Elizabeth Pagliacolo.

Fans of suspense know that atmosphere is everything. Just in time for Halloween, Azure has gathered the top 10 modernist houses that serve as the sinister backdrop for thrills and chills on film.