2013 in Review: Top 10 Interiors
From Foster + Partners' Atrium Champagne Bar in London to Olson Kundig's conversion of an auto garage into a tasting room, we round up this year's 10 standout interiors. 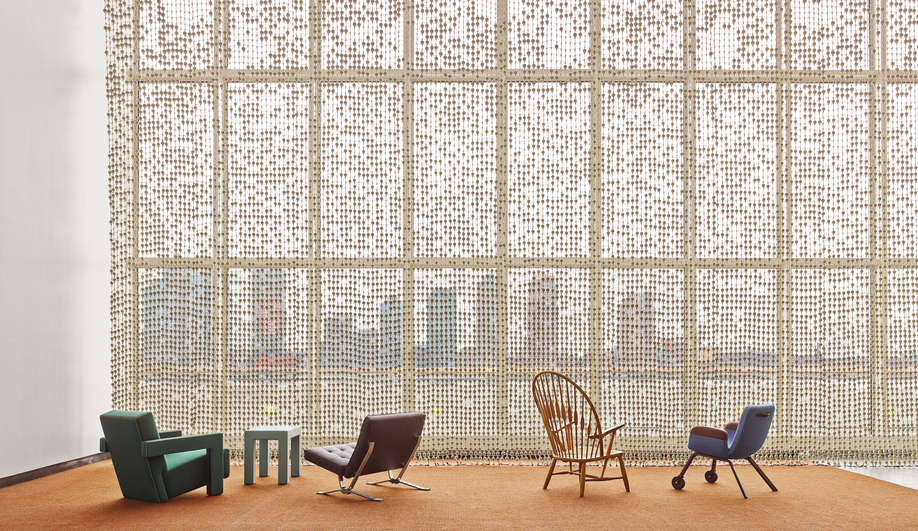 Sixty years after its opening, the North Delegates lounge at the UN building in New York was re-vamped (as a gift from The Netherlands) by Dutch designer Hella Jongerius, with the help of Rem Koolhaas, Irma Boom, Gabriel Lester and Louise Schouwenberg. The team opened up the space (originally designed by Le Corbusier, Oscar Niemeyer and Wallace K. Harrison), by removing the mezzanine, which blocked the view of the East River, and repositioning some of the existing iconic Scandinavian artwork. Jongerius devised a muted colour palette and created two new pieces for the lounge – her Sphere Table (manufactured by Vitra) and UN Lounge Chair – as well as the hand-knotted curtain made of 30,000 porcelain beads, which she produced with Royal Tichelaar Makkum. 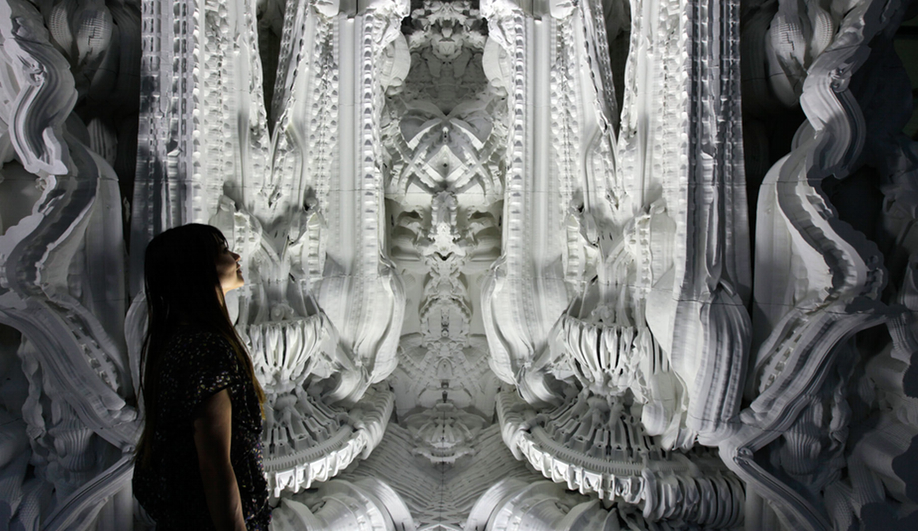 If we can 3D-print burgers and guns, why not a room? Made from 11 tonnes of printed sandstone, this 16-square-metre, Gaudi-esque structure is courtesy of Zurich’s Michael Hansmeyer and Benjamin Dillenburger. Over the course of a year, the duo developed and refined customized algorithms until they produced a complex geometry of 260 million individual facets with 78 gigs of data. Taking a month to print on a Voxeljet AG system and a day to assemble, Digital Grotesque is now part of Jakob + Macfarlane’s FRAC Centre’s permanent collection, in Orléans, France. 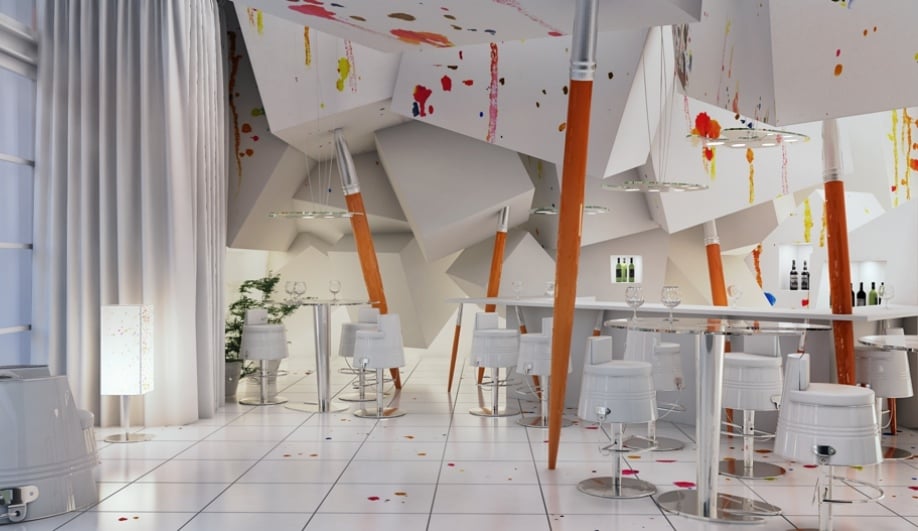 Slaughterhouses and sewing rooms inspire Poland’s Karina Wiciak, who cleverly devised themed bar and restaurant interior concepts for each month of 2013. Pracownia (shown), which means workshop in Polish, is a white canvas-like space with colourful splashy details. Oversized paintbrushes act as structural columns and palettes become pendant lights and glass table tops. Giant, over-turned paint buckets make up much of the furniture, including the toilet bowl and sink in the bathroom (with the mirror and countertop mounted on an easel). The painter’s studio-inspired space is number 10 of Collection XII. 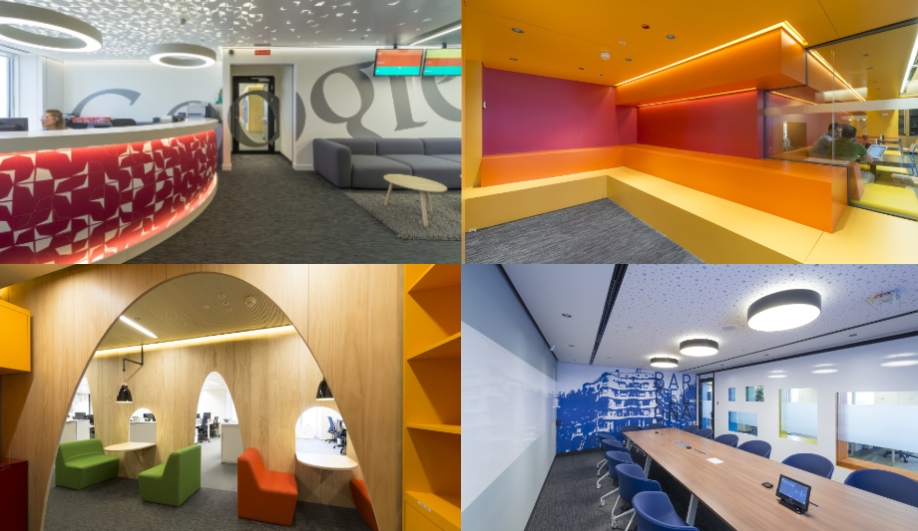 Following their design for the Google Campus in London’s Shoreditch, Jump Studios was invited back to create a home for the internet giant’s Madrid headquarters. The twelve-year-old U.K. firm, whose roster of clients include Red Bull and Nike, used birch and cork to anchor the on-brand colour injections through the furniture and wall graphics. To reflect the location, traditional Spanish-style arches abound, dramatic breakout areas are painted in fiery shades, and words such as ‘Barcelona’ and ‘Granada’ adorn meeting room walls. 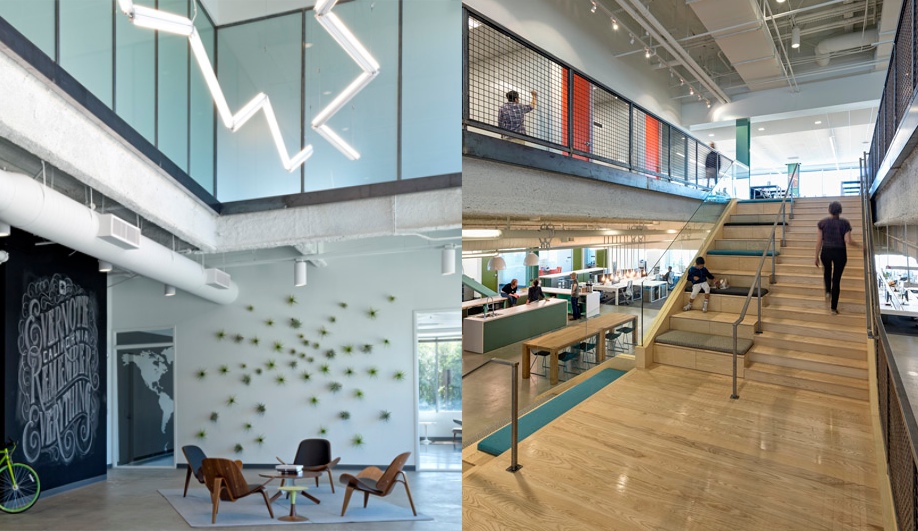 The San Fran firm that started out designing server rooms and labs recently took off as internet start-ups began hitting it big. With clients that include Facebook and PayPal, O+A was a natural fit for Evernote’s new office in Redwood City, California. The document management company desired a cross between edgy warehouse and art and craft, so Brooklyn artist Dana Tanamachi was commissioned to create an intricate chalkboard drawing which greets visitors to the 7,400-square-metre office. Douglas fir plywood clads the walls, Herman Miller furniture fills the lobby, and dramatic lighting fixtures such as the giant zigzags create a balance between artsy and uncluttered. (Read our June 2013 feature on O+A.) 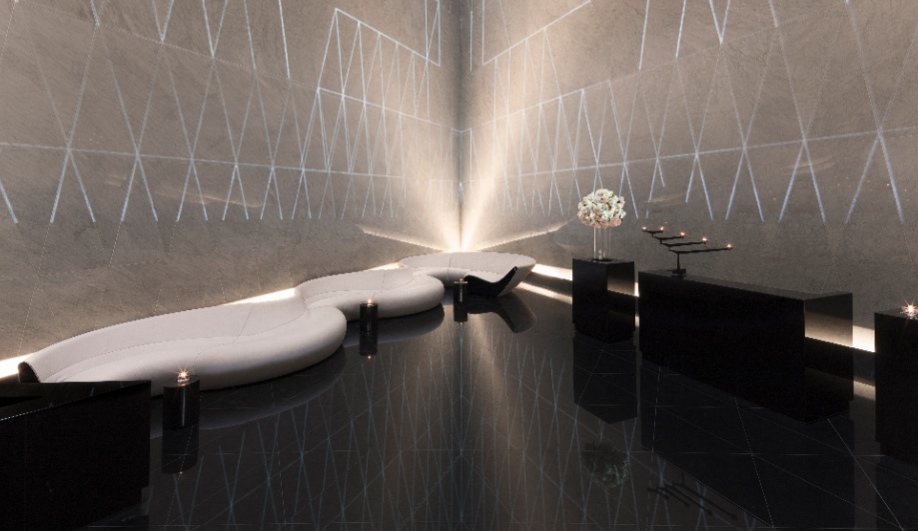 A nine-storey-high pyramid, clad entirely in white finishes – including ample marble -contrasted by the black polished granite floor, makes for one of the world’s most exquisite venues to indulge in bubbly. Norman Foster’s interior at the ME Hotel on The Strand in London features a 30-metre-long curving bench, sleek black reception desks and a freestanding triangular champagne bar, complete with illuminated images of jellyfish on the walls. A small opening at the top of the geometric structure lights the space. The interior nabbed the top prize at this year’s Restaurant & Bar Design Awards. 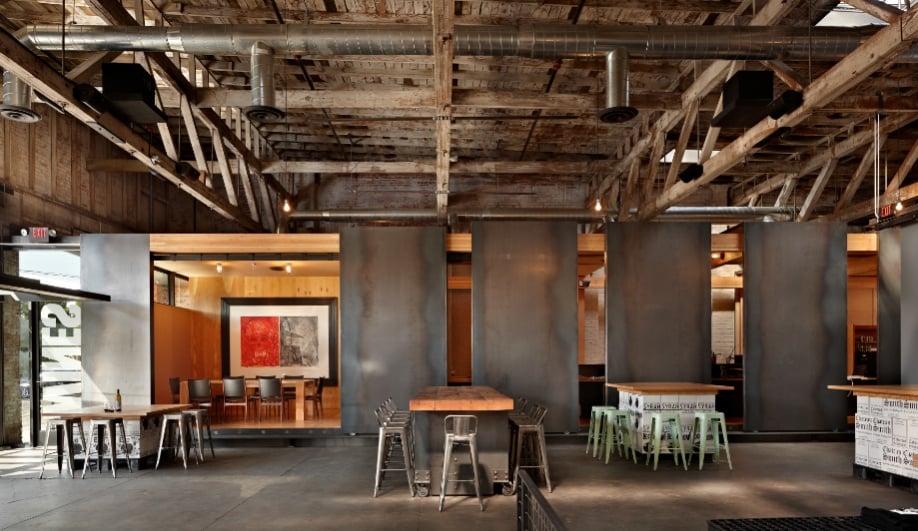 A band manager turned vintner, Charles Smith wanted a tasting room and office that matched his rock-and-roll style. Who better to call on than Seattle’s Olson Kundig, whose projects have a gritty but refined feel? Located in downtown Walla Walla, Washington, Charles Smith Wines occupies the 1917 Johnson Auto Electric building. Garage openings were replaced by two custom, hand-cranked pivot steel doors that open the space to the street and form an awning for outdoor seating. A drive-through concept was important to Smith so it could be utilized as an entertainment venue, where delivery vans or taco trucks for catering can literally drive through the space. CSW snagged an award at this year’s AIA. As a juror stated, “This project represents all of the fun things about architecture.” 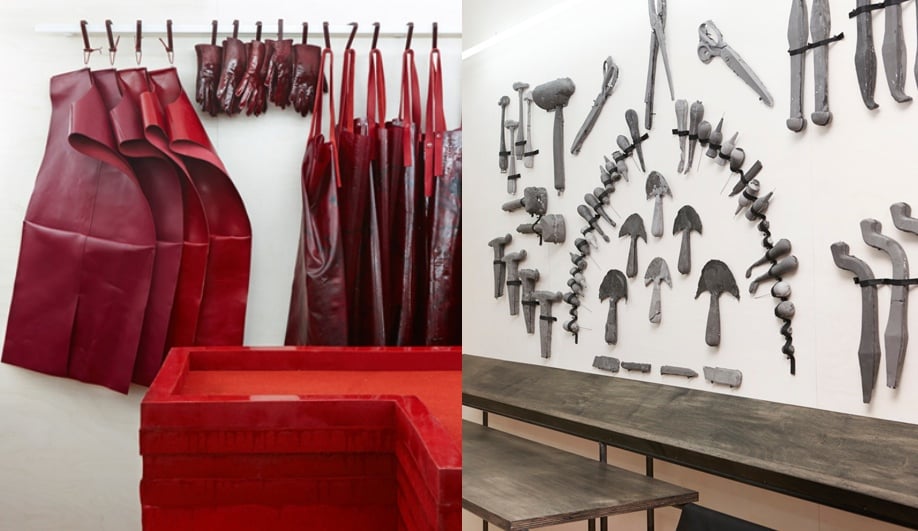 Never one to shy from provocation, the Brit designer devised a bloody good installation for Hermès’s Petit H, an arm which uses the brand’s offcuts and rejected stock to make new product. In the brand’s London shop, the exhibit (on until tomorrow) showcases garments hanging from wood replicating the tools and workbenches of the Petit H atelier. Dripping pigmented resin creates the effect of blood oozing from the display units. Visiting Hermès’s atelier proved to be inspirational in helping the designer “find beauty in the unexpected” – a talent Toogood continues to excel at. 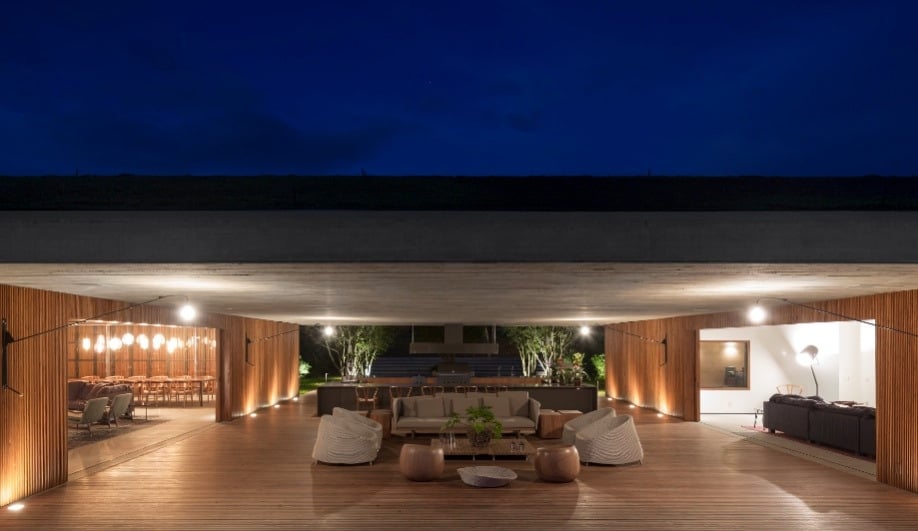 Brazil’s Marcio Kogan has a knack for designing stunning homes, in São Paulo and beyond. His most recent, a 715-square-metre residence on a hilly Brazilian landscape, creates an inviting environment that offers relief from the sweltering heat. Inside, MM House mixes old and modern beautifully: Jean Prouvé’s two-metre long pivoting Potence lamps for Vitra adorn the walls, while the living room is filled with such pieces as the Nebula Nine sofa by Diesel for Moroso and the more traditional Poltrona Cumulus chair. Kogan also taps local designers, like Jorge Zalszupin, and materials such as Freijó wood. Fitting, since his projects effortlessly meld into their surroundings. 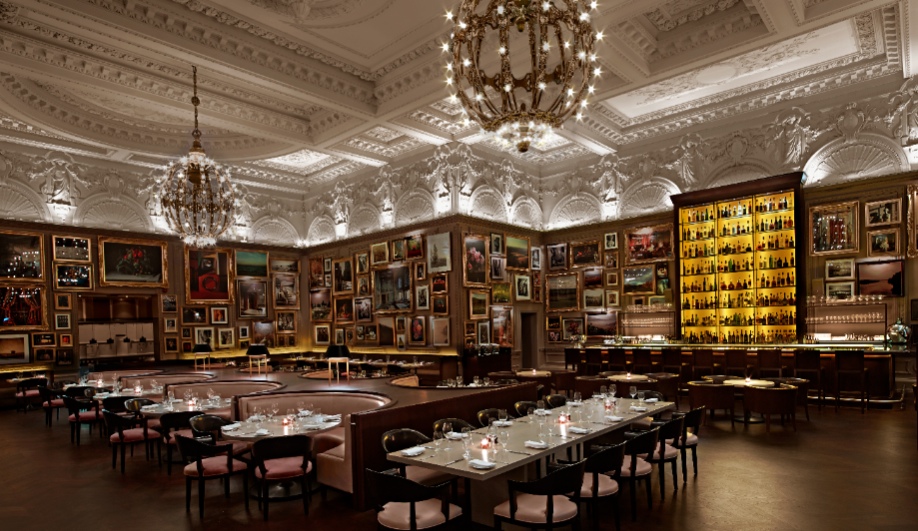 No interiors list would be complete without the kings of hospitality design. This year, Toronto’s Yabu Pushelberg, together with hotelier Ian Schrager and Marriott, restored the shuttered 1908 Berners Hotel, a building comprising five circa-1835 Georgian townhouses on Berners Street in London. Though the firm worked with the original, highly ornate architectural bones of the interior – an attempt to bring it back to what it once was – the result clearly has the YP stamp. The luxurious and sexy interior includes such surprises as slick metal furniture by Christian Liaigre and Ingo Maurer’s suspended polished-silver orb in the lobby ceiling. In the words of Pushelberg, “Great hotels can seem a bit odd, but have a feeling of elegance that you remember.”