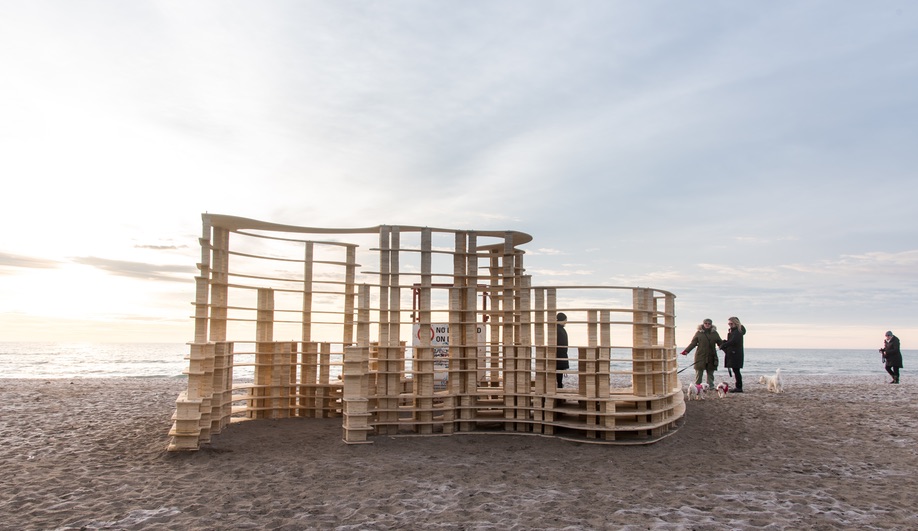 Rising Up, one of seven pavilions now installed at Woodbine Beach in Toronto

For a city that’s in deep freeze for half the year, Toronto is oddly reluctant to embrace winter. But various get-outside initiatives are changing that hibernation mentality. The Bentway, an outdoor skating rink that opened recently underneath the Gardiner Expressway, is now listed on dozens of websites as a must-do for tourists visiting the city. Nearby is Icebreakers, where five public art installations by young talents from across Canada have been temporarily built to attract visitors to the water’s edge.

The most popular outdoor celebration is Winter Stations, a competition-based event where art installations are built around vacant lifeguard stands along a mile-long stretch of beachfront in the city’s east end. Now in its fourth year, the annual event is spearheaded by Ferris + Associates, Curio and by RAW Design, a local architecture firm that regularly gives back to the city through creative enterprises, often in the form of summer parties and BBQs hosted in soon-to-be-demolished buildings.

This year’s four Winter Stations winners are all from other places: New York, Hamburg, Rotterdam and Surbitin in the U.K., while three additional pavilions have been designed and built by students from local architecture universities.

To make connections between the installations, the organizers chose Riot as a theme, to reflect the turbulent political times we’re living in. There isn’t much evidence the theme was a driving force, with the notable exception of Martin Miller and Mo Zheng’s Pussy Hut. The New York architects (who also have an office in Beijing called AntiStatics Architecture) knit a pink hat out of stockinettes that are stuffed with recycled foam off-cuts. The fat tubes of “yarn” were knit by volunteers into the shape of the famed Women’s March toque, which was then stretched over a plywood structure built in the shape of a giant head. 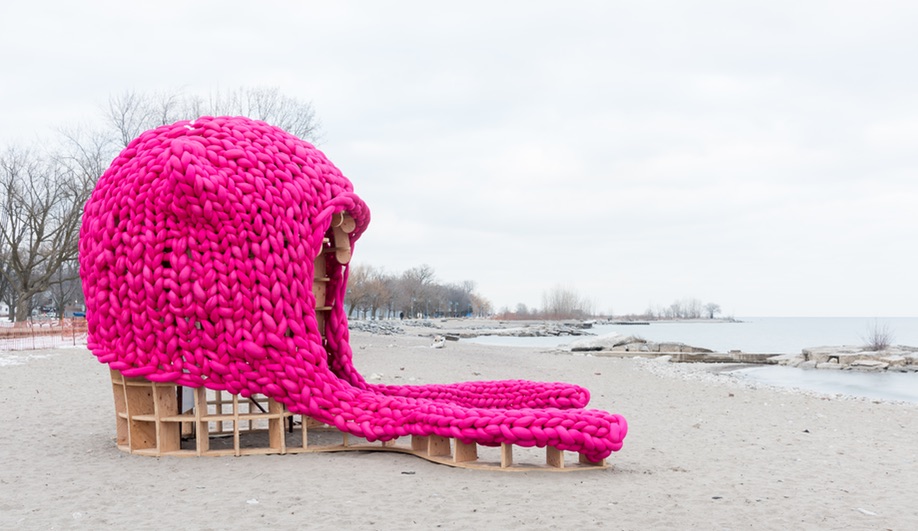 The hut makes for a cozy wind-breaking place to sit, but the designers are also encouraging visitors to inscribe the names of their heroines and mentors into the exposed wood to activate the pavilion into a space of empowerment. It works beautifully from afar as a colourful beacon in the midst of sand and ice, while up close, kids can’t help but clamour all over it. 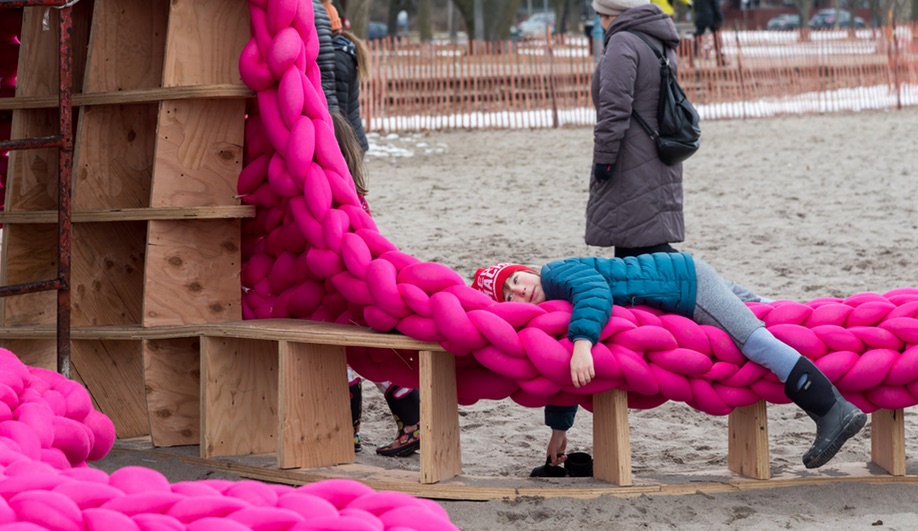 Paul van den Berg and Joyce de Grauw of Rotterdam have also provided a pavilion embedded with a fun, though serious, message. Wind Station is built in the shape of a nuclear power cooling tower, with its framework covered in hundreds of pin wheels that make a swishing sound as they blow around – a playful reminder that wind, by comparison to nuclear energy, is natural, clean and free. 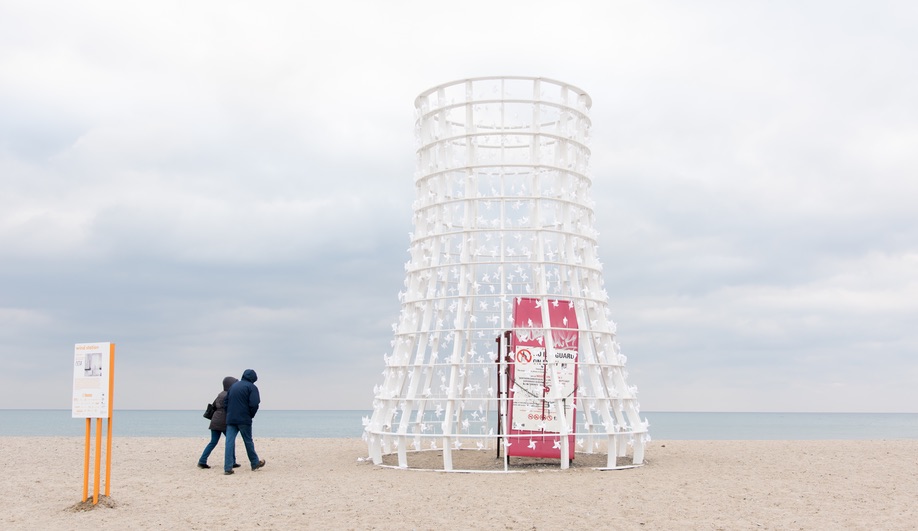 Visitors can enter the pavilion and climb up the safety guard chair to experience the full moving shape from the interior. 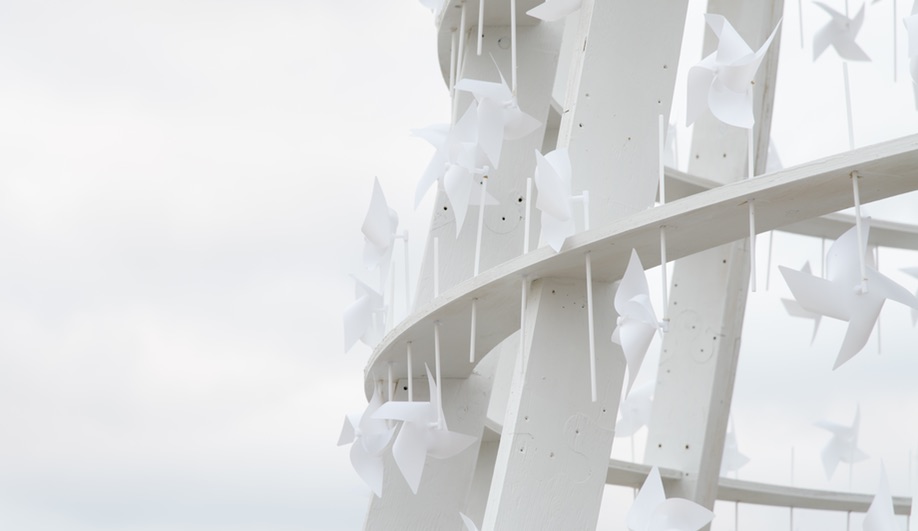 Van den Berg and Grauw are principals of Atelier ARI, a boutique studio that is making a name for itself with politically-charged projects like this one. Last year, they participated in Warming Huts in Winnipeg with a poignant installation: a permeable curtain that was strung across Assiniboine River, and which ice skaters could easily traverse. Called Open Borders, the curtain was a timely response to the U.S. President’s announced plans to construct a wall along the Mexican border.

Kien Pham of the U.K., meanwhile, has constructed Obstacle, where close to 50 red-painted columns made of wooden planks are suspended loosely from a massive grid. The columns rotate and swing lightly in the wind, but they have to be pushed aside in order to walk through the structure. 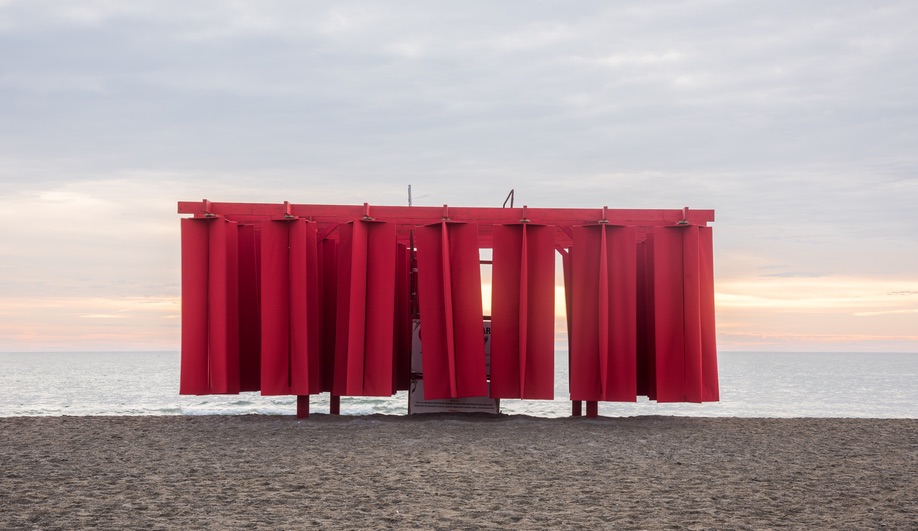 Its maze-like design works best when more people navigate it, requiring a kind of group cooperation, where working together rather than blocking one another’s path is the more effective option. It’s a reminder, says Pham, that even small gestures, like opening a door to let someone pass through first, are fundamental to maintaining harmony in groups. 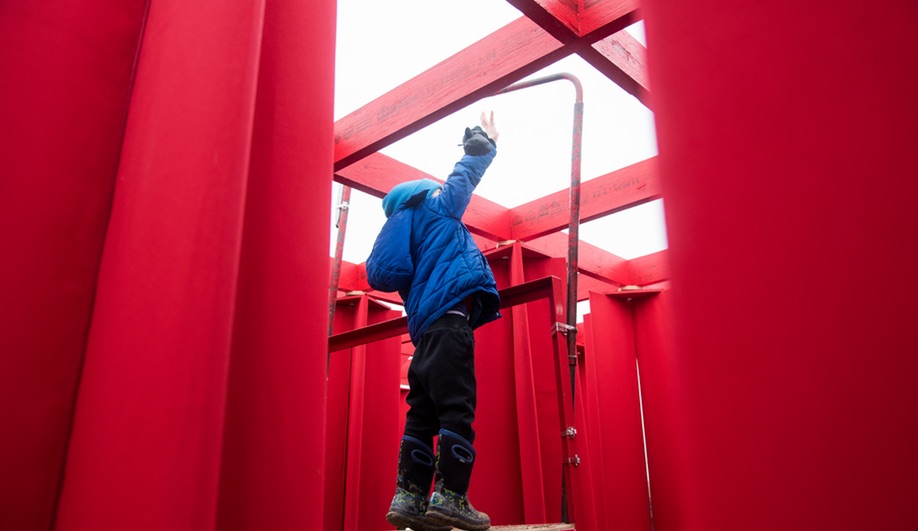 Another interactive crowd pleaser is Make Some Noise!!!, by Alexandra Grieß & Jorel Heid of Hamburg, where giant horns can be activated by winding up red hand cranks. The horns bellow out a satisfying siren sound that can get impressively loud when all four horns are engaged. 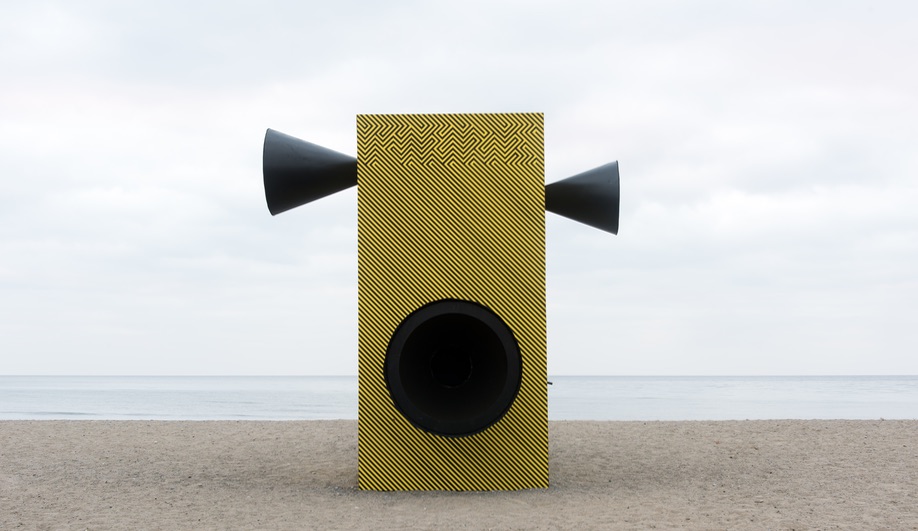 Make Some Noise!!!, by Alexandra Grieß & Jorel Heid of Hamburg

Covered in a buzzy pattern of black and yellow stripes (which, if you squint, spells out the words Make Some Noise!!!), the designers say the inspiration for their giant toy came from past noise makers. In particular, the Italian futurist artist Luigi Russollo, author of the influential 1916 book The Art of Noises, and from the Russian avant-garde composer Arseni Awraamow, who is best known for using navy ship sirens, whistles, car horns and cannons as musical instruments. 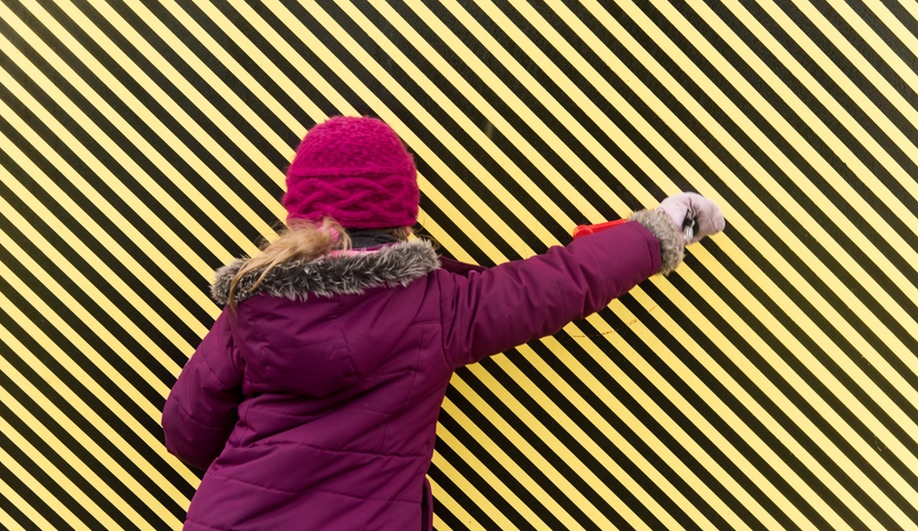 Similarly, Grieß and Heid are inviting visitors to get loud – and liberated – by cranking the horns to their fullest volumes. “A single voice can be loud,” they say, “but several voices are even louder.”

Three more pavilions are also installed along the beach, each created and built by students from local design schools OCADU, Ryerson University and the University of Guelph. See them below. 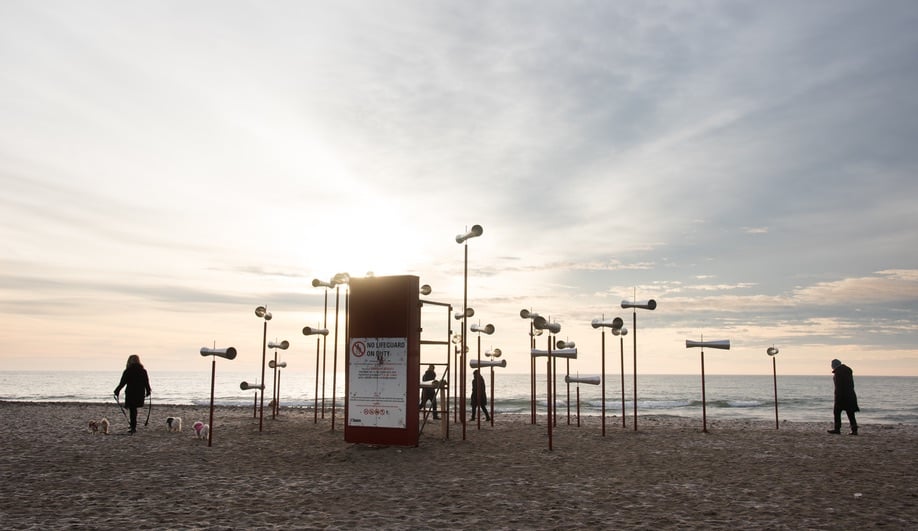 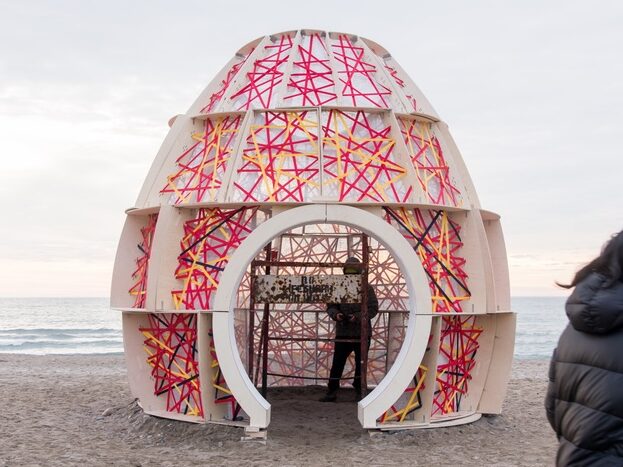 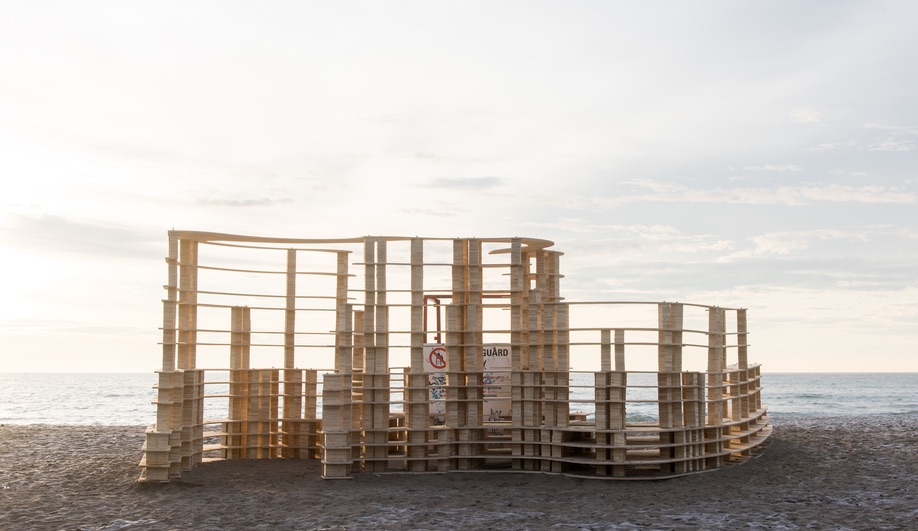