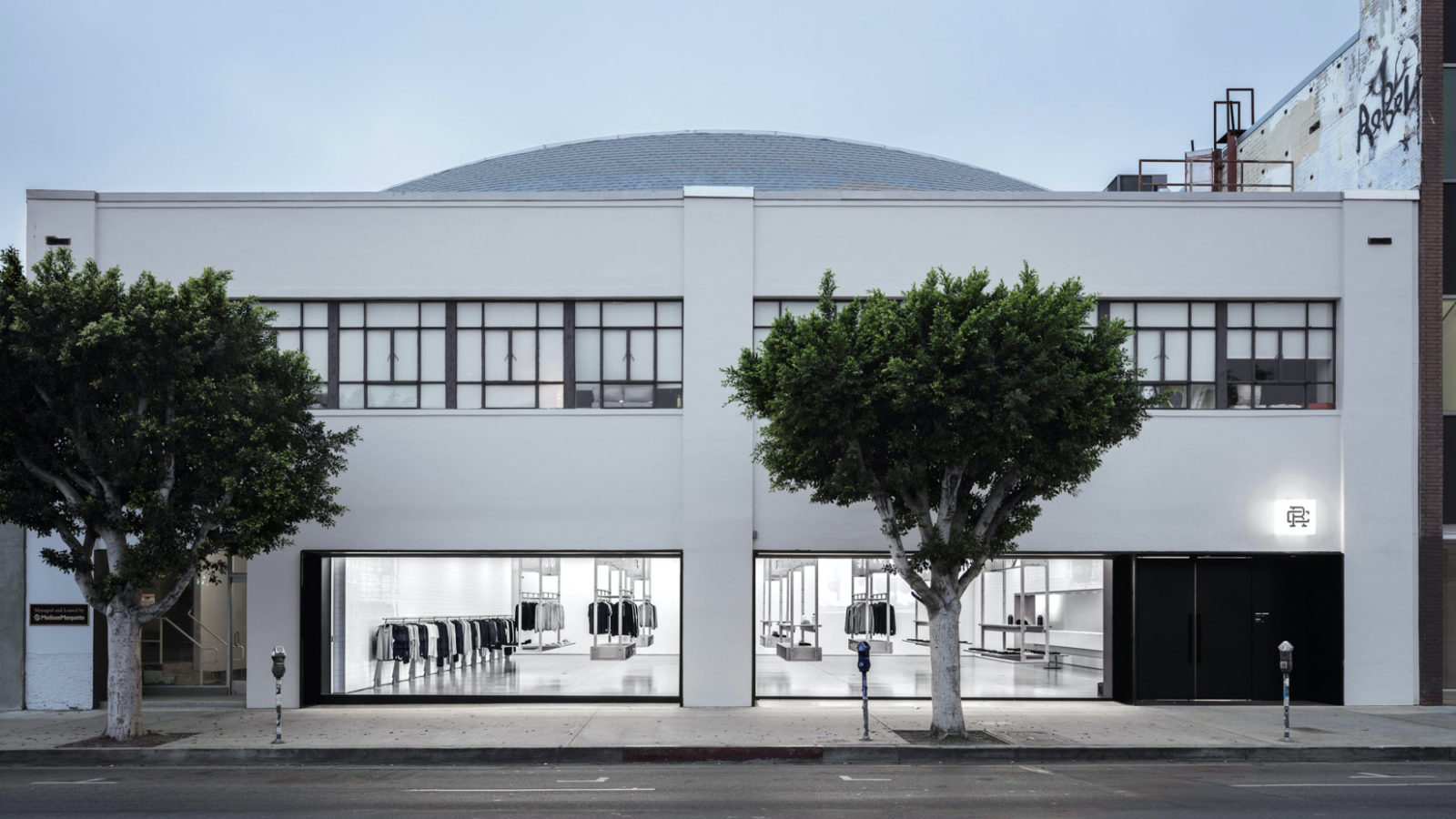 5 Projects that Capture the Brilliance of Vancouver Architect Peter Cardew

From art galleries and private homes to interior designs, the British-born architect, who died last week at the age of 81, achieved excellence in every realm.

Peter Cardew was a rare breed of architect. Innovating until the end of his life, he never sought self-promotion. He established his practice in Vancouver in 1980, after moving to the island from his native Guildford, England. As highly regarded as he would become in his adopted country, where he created most of his work, he was less interested in pursuing fame than he was in creating beautiful work and being a genuine person.

He was known for his preternatural kindness – and was especially beloved for it in Canada, where he received the Gold Medal from the Royal Architectural Institute of Canada, the nation’s highest architectural honour, among many awards. Throughout his career, he was a major influence on the burgeoning architecture studios on the west coast, where his loss is being most keenly felt. 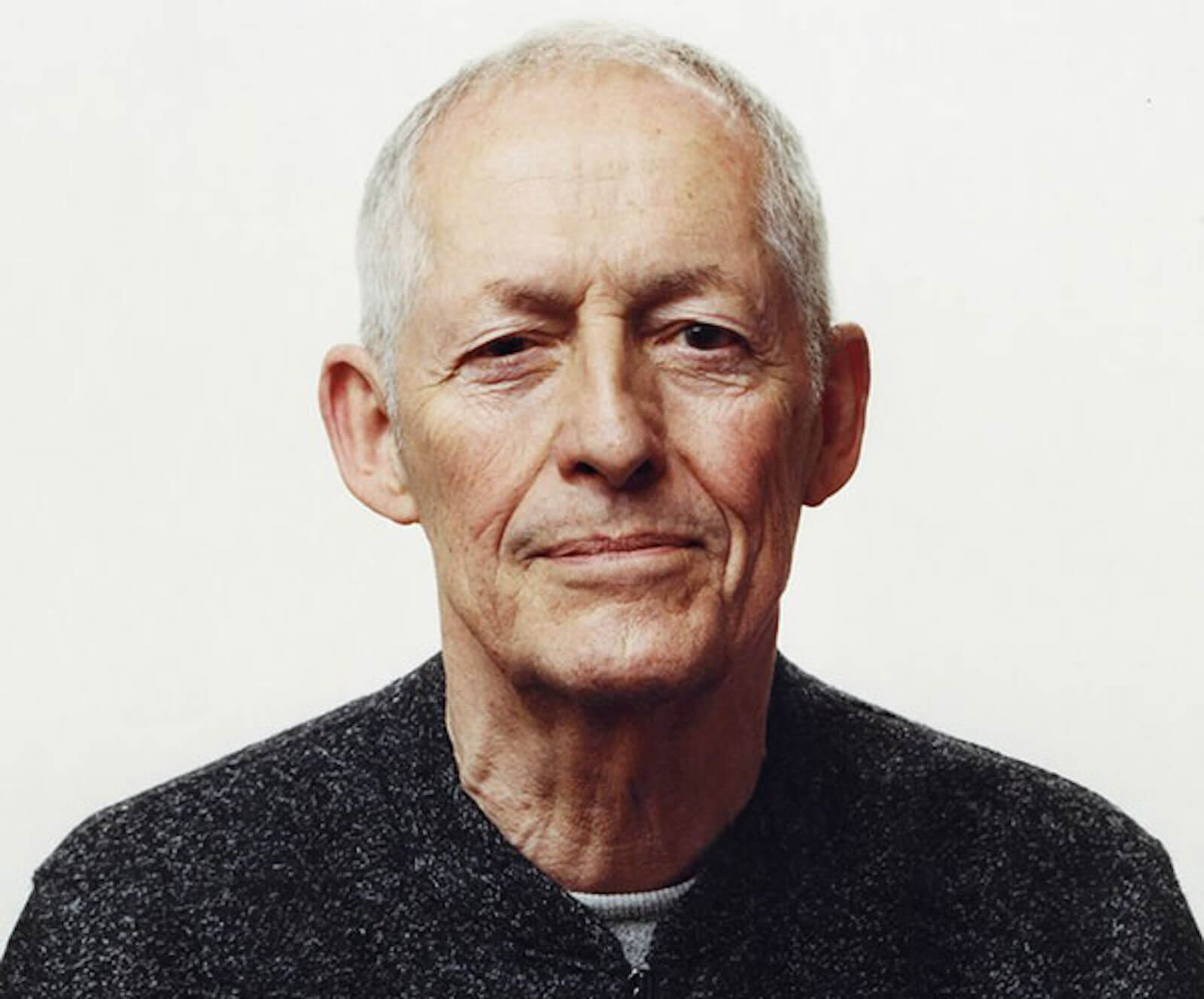 Cardew was an uncompromising designer of some of Vancouver’s most acclaimed modern buildings and interiors, including the C.N. Pavilion at Expo 86, the Morris and Helen Belkin Art Gallery, and the Reigning Champ stores in Vancouver, Los Angeles and Toronto. His obituary in the Globe and Mail captures his passion: “Peter imagined, re-imagined, lobbied, mentored and taught. He saw every project, whether it was a home, a museum or a clothing store, as an opportunity to innovate and to deliver something unexpected.”

Here are five of the unexpected gifts he left behind: 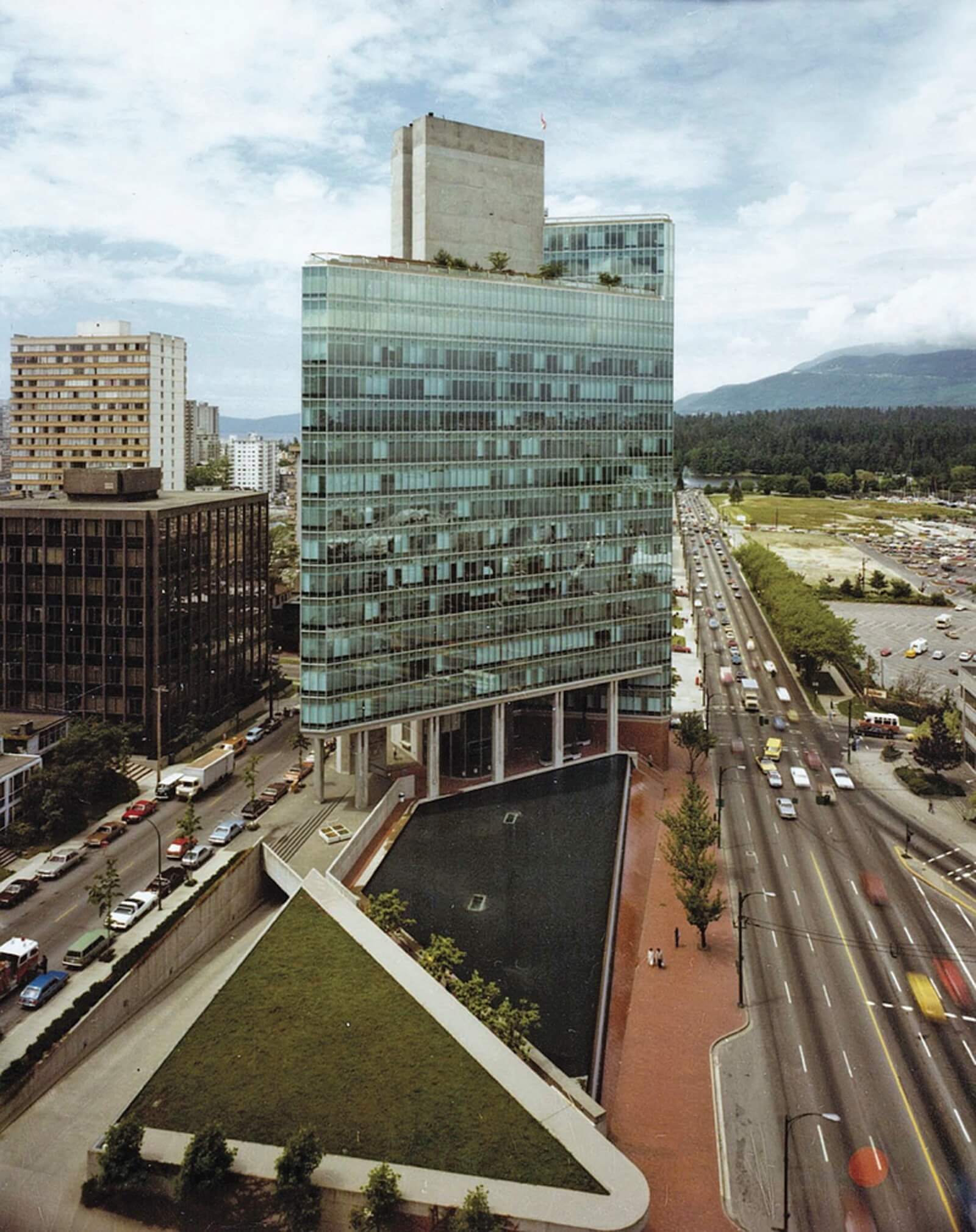 By sheer square footage, the scale of Vancouver’s Crown Life Plaza nearly equals Peter Cardew’s total output in the years since it was completed in 1978. While that may be an inelegant measure of an architect’s career, it underlines the career-making scope of the project now known as 1500 West Georgia. A post-modern complex with hints of sculptural brutalism, the angular 20-storey glass office tower sits atop a simple brick base; an adjoining pool and waterfall animate the public realm. When viewed from a distance, it appears almost weightless.

Set alongside an interchange that defies Vancouver’s otherwise rectilinear street grid, the building unfolds in an almost triangular form wrapped in a graceful glass curtainwall – an energy-efficient building envelope that was well ahead of its time. In a sensitive response to the urban context, Crown Life Plaza / 1500 West Georgia opens to the city around it. It is not an iconic – or particularly assertive – presence, but its understated elegance exemplifies Cardew’s philosophy of “ordinary buildings.” And not for nothing, it also remains a highly prized address for architects and designers. 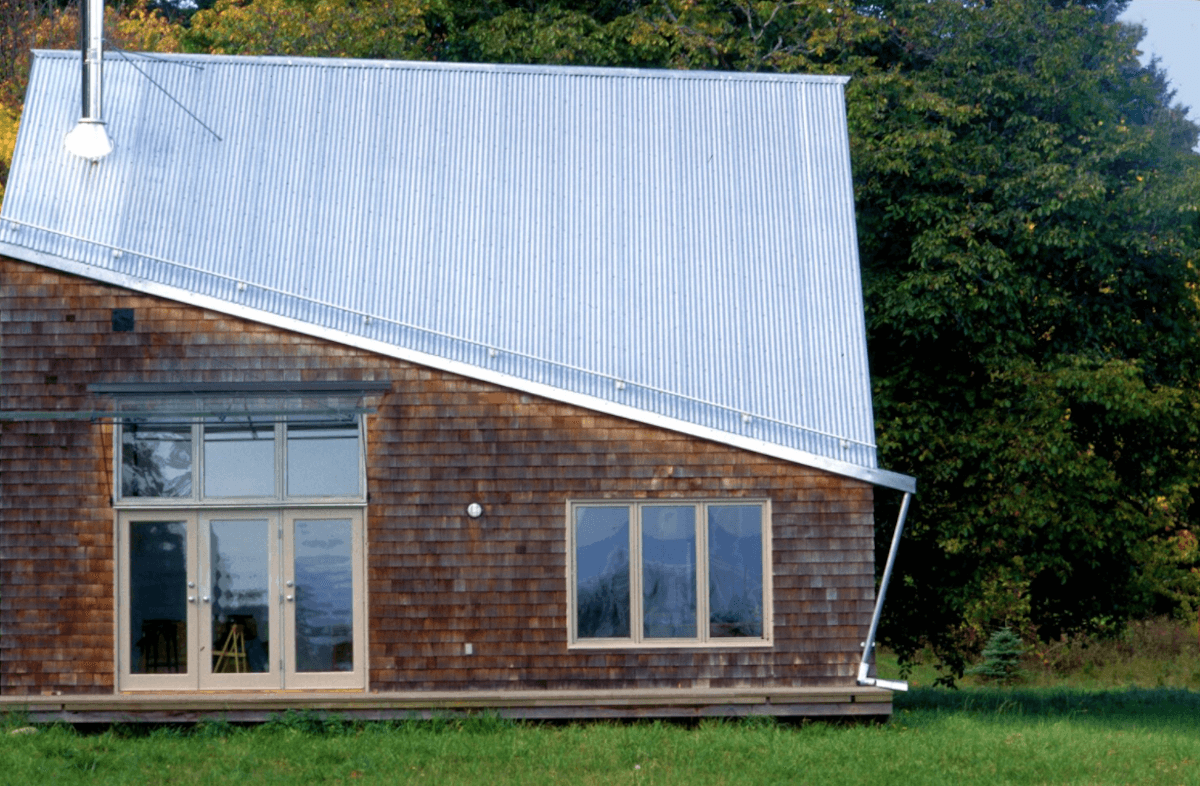 Nestled at the edge of a remote, sloping waterfront site on Salt Spring Island, the Fulford residence, conceived as a retreat for a close-knit family of four, deliberately shields its grandeur behind a humble cedar facade. Its angular metal roof, exposed wood on its underside, forms an exacting canopy that not only accommodates the challenging terrain, but allows the house to seamlessly transition from a soaring living space (which includes a mezzanine that doubles as the main entrance) to a low, intimate dining area.

The muted 83-square-metre interior includes architectural features constructed by the client (whose original intention was to build the entire house himself); using a fallen maple tree, the homeowner created the carefully placed doors and windows as well as a selection of millwork pieces. Altogether, the home is a testament to Peter Cardew’s deft handling of space and to the current of restraint running through much of his work. Here, even the most direct of briefs results in a singular structure — a choreographed descent with and within the landscape. 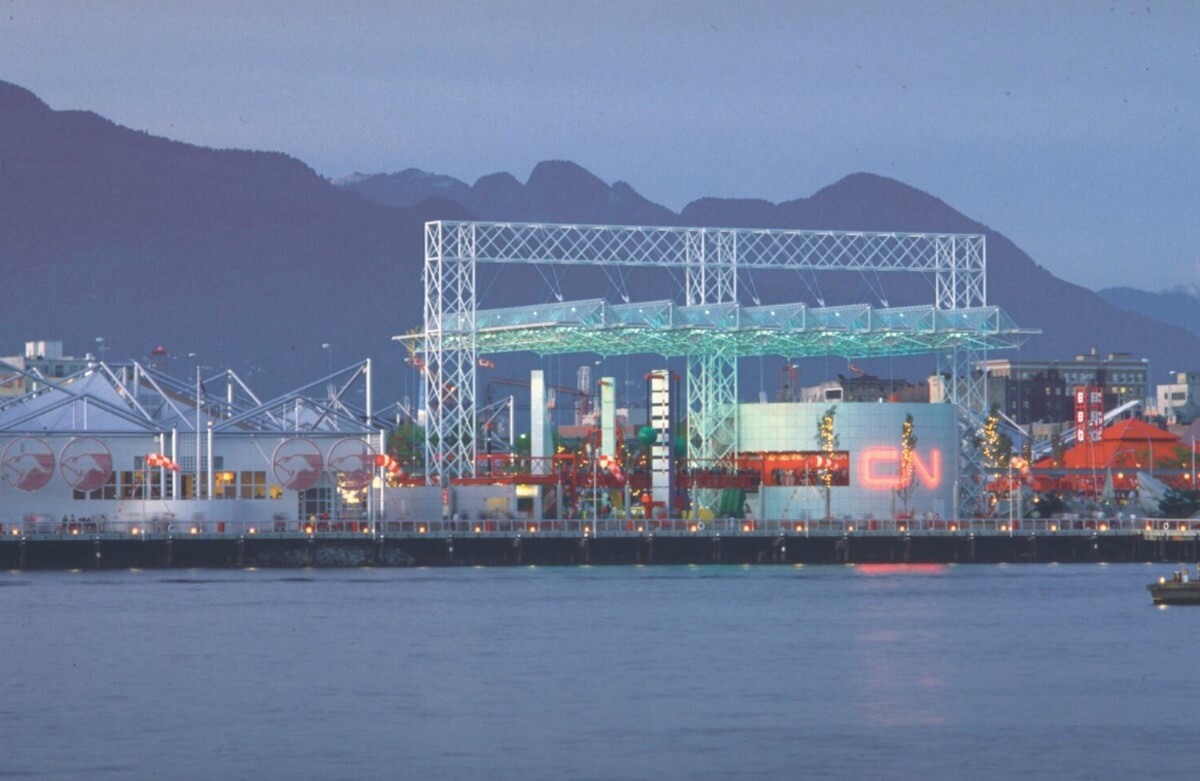 Canada Place, the much-replicated sail-topped structure that still sits in downtown Vancouver, may be Expo 86’s most famous architectural icon. But it was the CN Pavilion — Peter Cardew’s contribution to the city-transforming world’s fair — that embodied a more lasting, people-focused agenda.

Consisting of a grand steel framework wrapped around a cylinder theatre, his design broke the mould of conventional pavilions, encouraging social interaction even before entry. It was in large part a reaction to the poorly accessible site on Vancouver’s then-undeveloped waterfront. To alleviate the tedium of standing in queues, the theatre was approached by a raised bridge that not only channeled visitors efficiently, but provided great views of the surrounding harbour. Large mobile exhibits demonstrating the laws of motion hung from the exposed canopy, which recalled the lofty railway stations of 19th-century Britain. 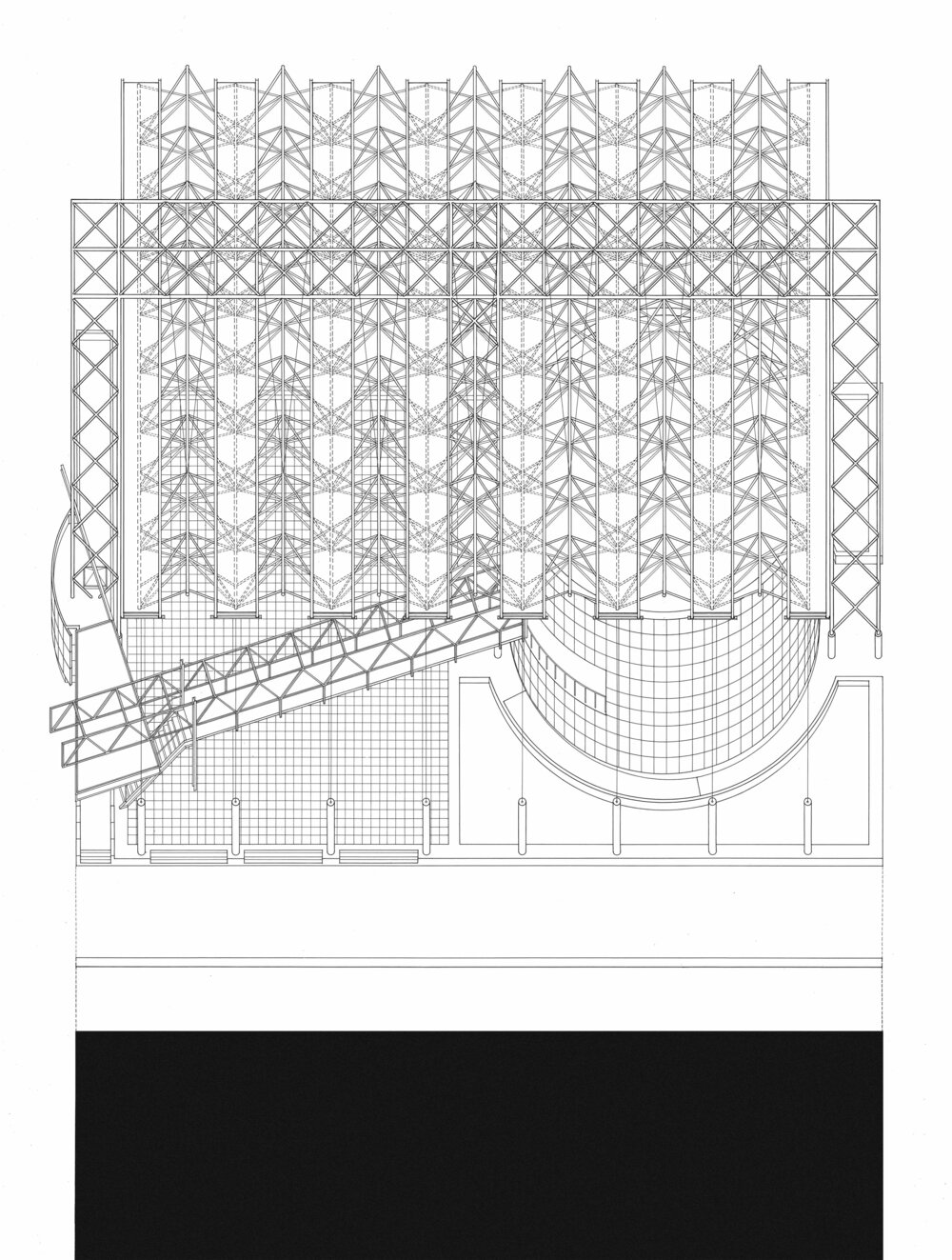 In the generosity of its public space and its openness both actual and symbolic, the CN Pavilion seems especially fresh today. Over the ensuing years, Canada Place may have launched a thousand ship-shaped structures, but it’s Cardew’s vision that has real buoyancy. 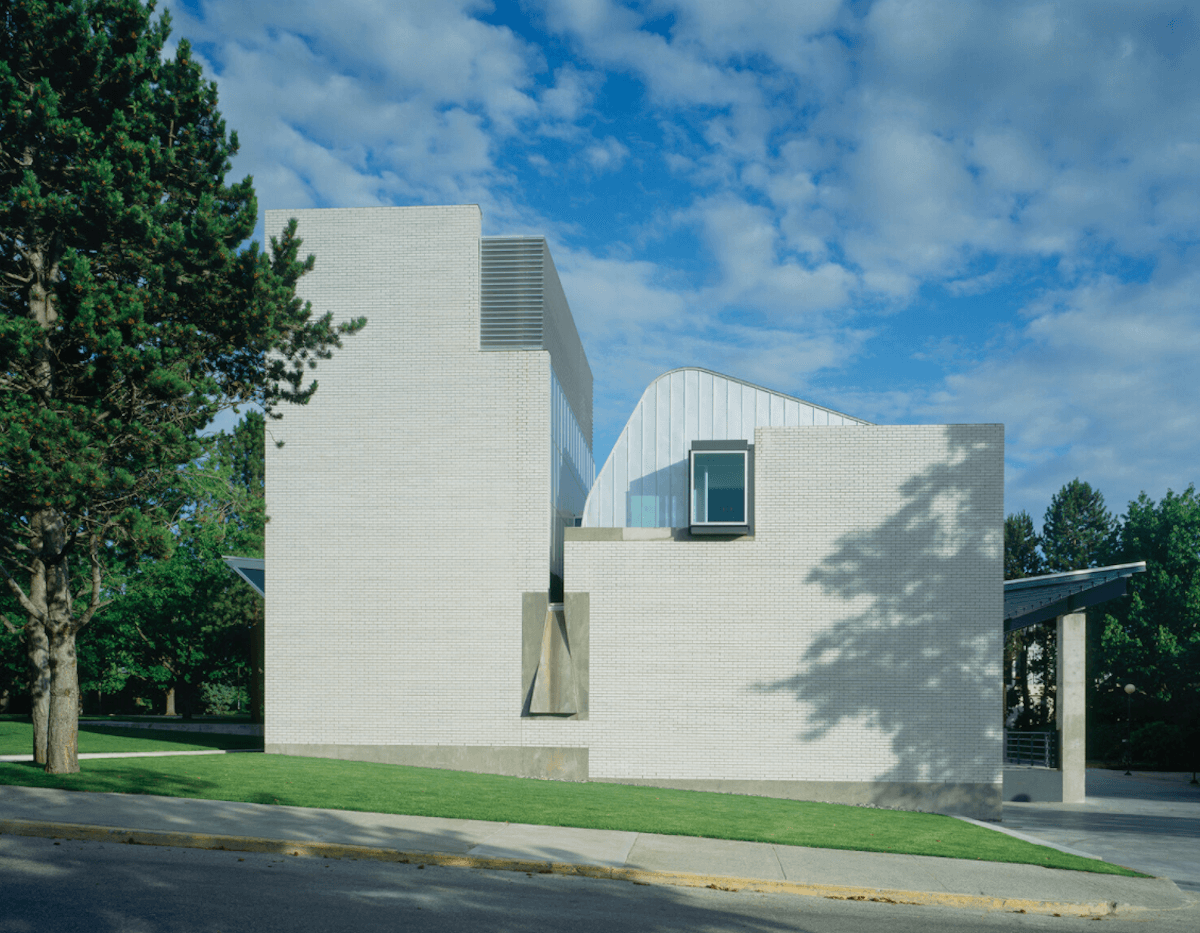 The commission to design the second-largest non-commercial art gallery in Vancouver (after the VAG) presented Peter Cardew with a host of programming challenges. Proposed for a plum site on the University of British Columbia’s Main Mall, the building had to be both a gateway to the campus and a cornerstone of the school’s Fine Arts Precinct. In addition to housing ambitious exhibitions, learning and research functions required accommodation. And it had to be a showpiece, with a strong identity, for its academic host.

Cardew addressed all of these imperatives with his typical acuity. Featuring a primary entrance on the mall and another on the plaza shared by the arts faculties, the resulting gallery — a distinctly modernist yet utterly original white-brick structure with a shape-shifting profile — is both introverted and welcoming, discreet yet statement-making. A similar flexibility prevails inside, where a system of large pivoting walls can be manipulated to accommodate a range of exhibitions and both public and non-public functions are interlinked yet delineated by the building’s forms.

In 1999, the Belkin was awarded a Governor General’s Medal for Architecture by the Royal Architectural Institute of Canada. The greatest testament to its success, however, is how well-used — and beloved — the facility remains. 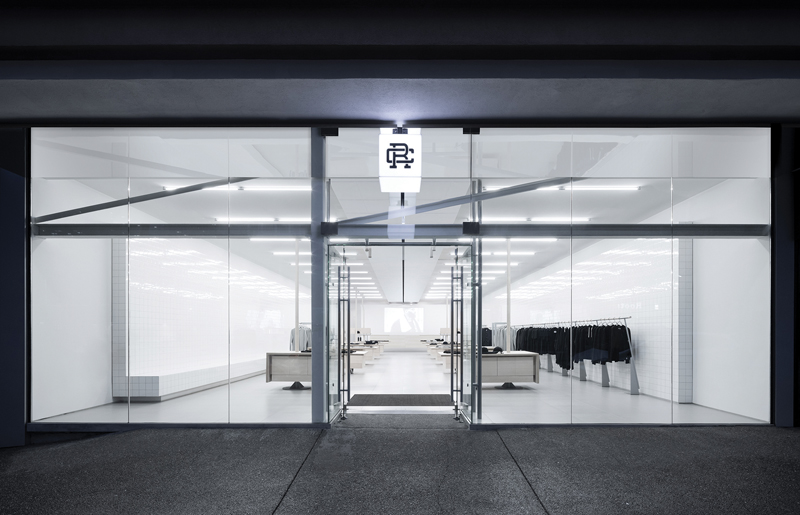 When Peter Cardew designed the first store, in Vancouver, for Reigning Champ, a homegrown brand manufacturing quality leisurewear, he laid the foundation for a malleable aesthetic: polished concrete floors, gleaming-white tile walls, modular display units crafted from Western Hemlock and linear arrangements of ceiling-mounted fluorescent tube lighting. Having achieved the desired effect of evoking a bright, active gym, the stores – five in total, now – are all minimalist clean lines. And while this perfectionism might have felt cold in anyone else’s hands, Cardew instead managed to convey a friendly, warm atmosphere through his wonderful attention to detail. 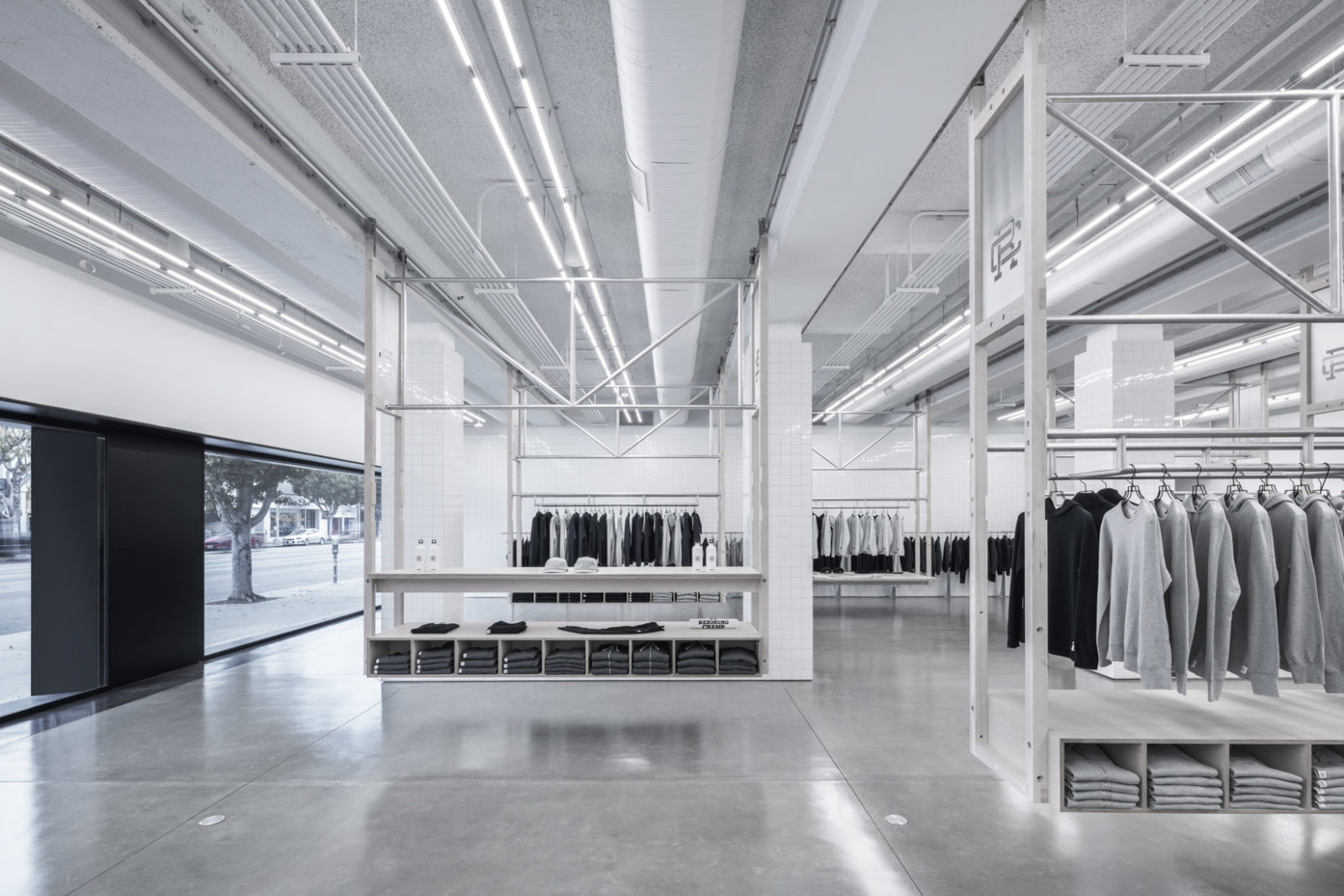 Despite their uniformity in material palette, every Reigning Champ has its own interpretation of an interchangeable system: One of the Vancouver locations features display tables on casters that seem to hover above the floor, while wooden dowels anchor them to the ceiling and create a sense of verticality; the Los Angeles shop features clothing tables suspended from frames that move along a ceiling track. The ethos here is ultimate flexibility – and timelessness. “In a time when sacrificing material resources simply for a change in appearance may be considered as irresponsibly wasteful, these innovative design solutions create equally effective change,” Cardew said.

From art galleries and private homes to interior designs, the British-born architect, who died last week at the age of 81, achieved excellence in every realm.