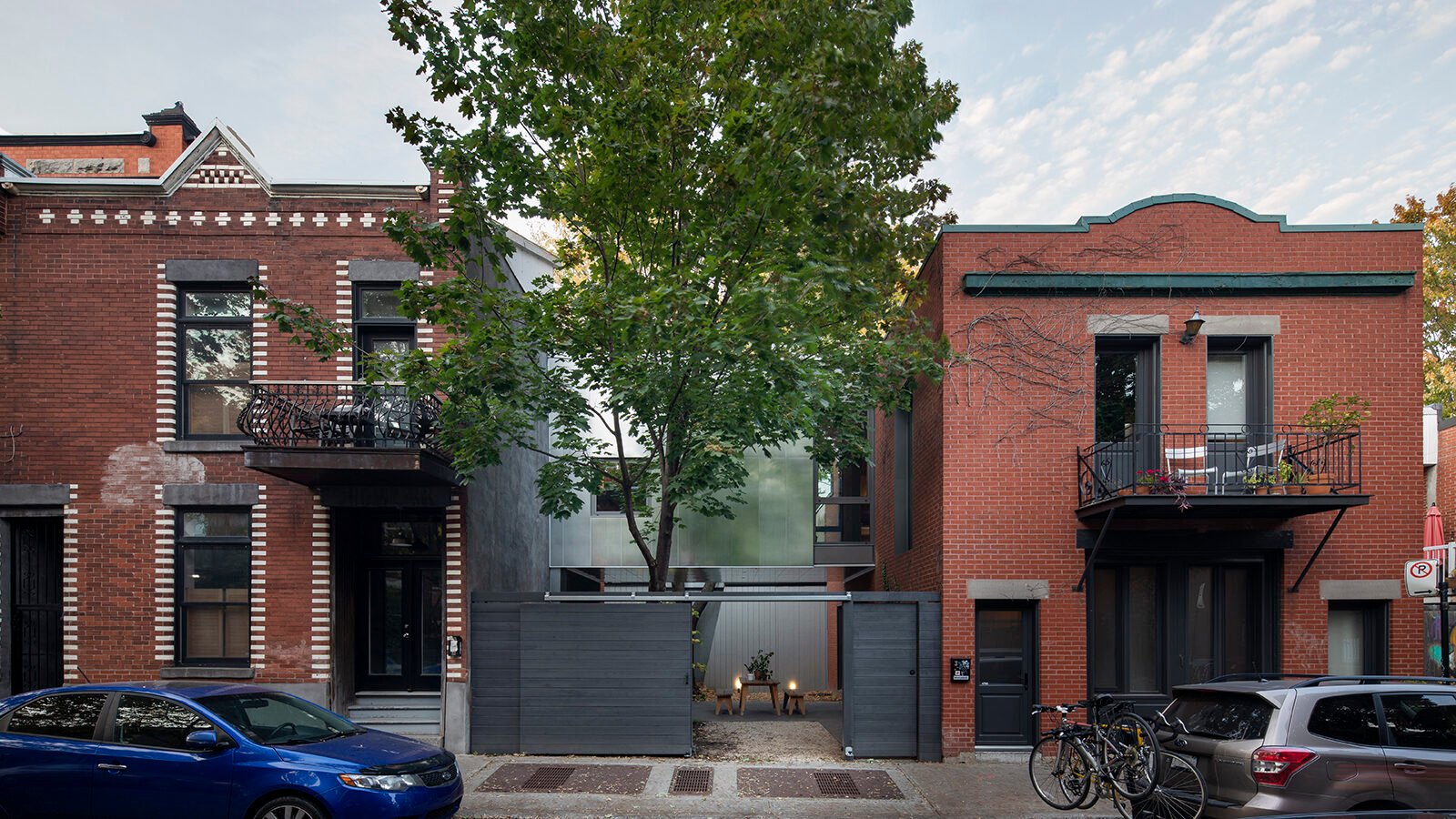 A Montreal Expansion that Skilfully Plays with Void

In Montreal’s Plateau-Mont-Royal, a floating volume clad in hazy metal panels gently reflects the sky. Suspended above a courtyard, bridging the gap between a carriage house and its neighbour, it creates a pleasing juxtaposition of form and void. The effect is the result of architectural sleight of hand: Tasked with renovating and extending the century-old carriage house on a tight footprint, local firm T B A embraced the shallow lot’s constraints head-on. 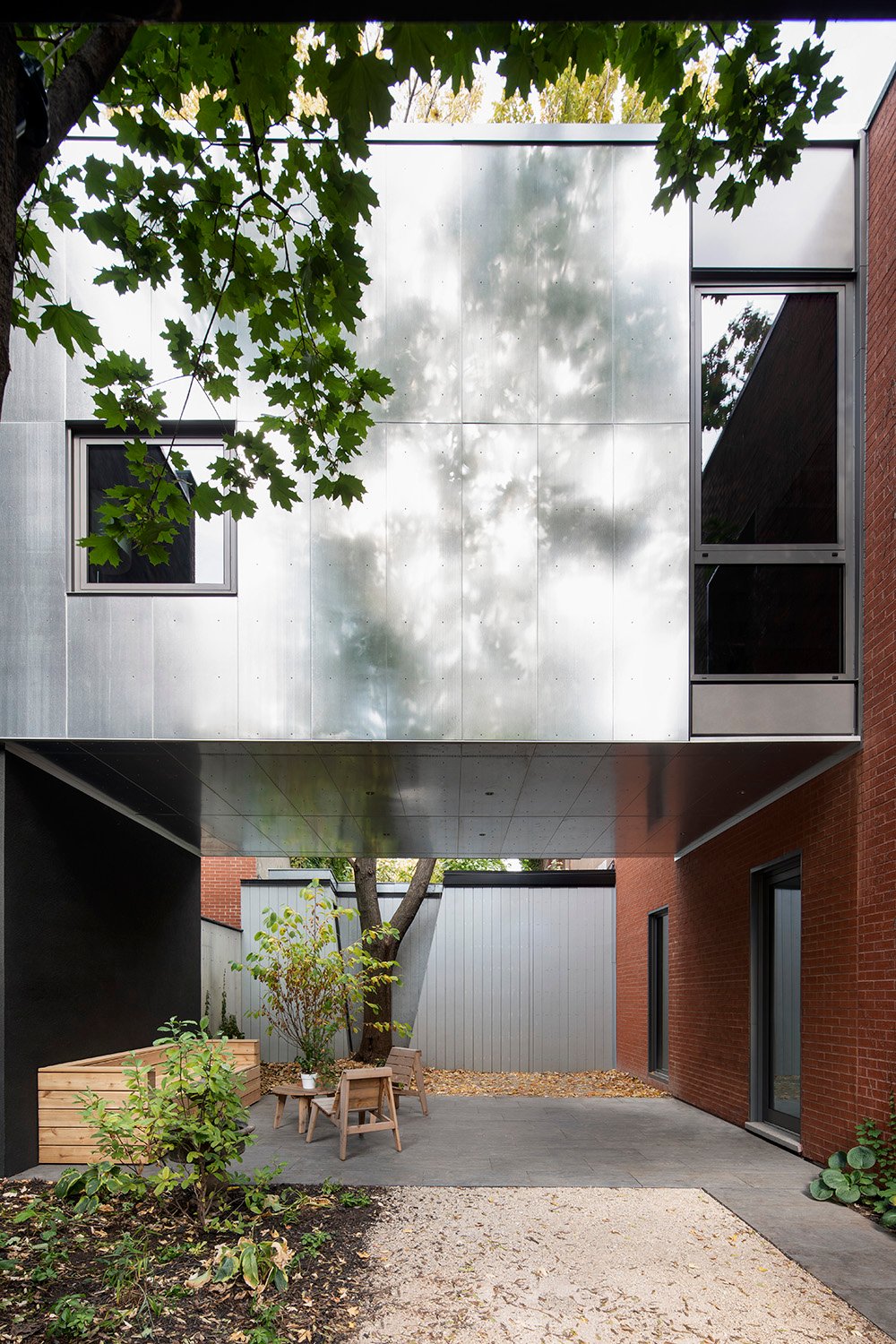 The addition hovers over an exterior courtyard, providing it with shade, intimacy and a sense of shelter.

With no area inside for a living room and limited outdoor space for an extension, they put it overhead. Thomas Balaban, the multidisciplinary firm’s founder, has designed several extensions in Montreal, but this renovation and expansion — the whole of which he calls Berri — was a departure. “Our usual approach involves a front yard, courtyard and backyard,” he says. “This lot felt very ‘elsewhere,’ presenting different opportunities to organize the house.” The resulting strategy is exciting yet surprisingly functional: The overhead extension shelters a new patio, and its living room is surrounded by light on two sides. 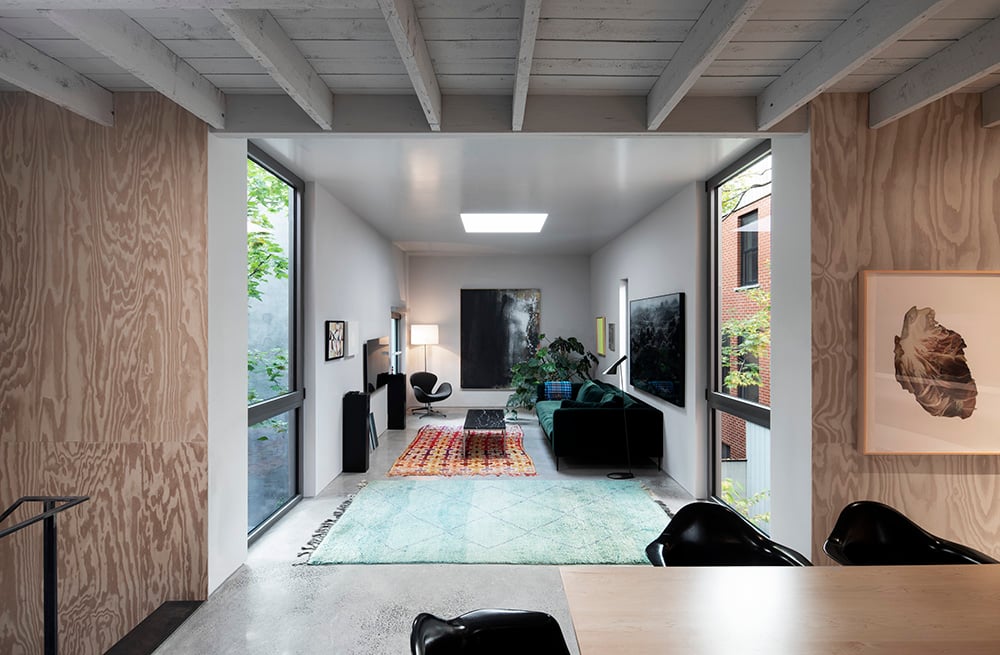 A view into the living room, situated inside the extension, illustrates how the original home (where the dining room features an Eames conference table and chairs) seamlessly extends into the new space.

The project skillfully modernizes the structure for a young family. Inside the 120-square-metre carriage house, a tightly compartmentalized interior (the product of prior renovations) was stripped away in favour of a more open layout. “Berri has a rawness to its aesthetic, a celebration of the workhorse materials used in construction,” Balaban notes. Minimalist detailing lets the everyday joinery of the roof take centre stage, while exposed plywood walls provide a textured backdrop for the family’s art collection. “It’s William Morris meets Home Depot,” the firm quips. 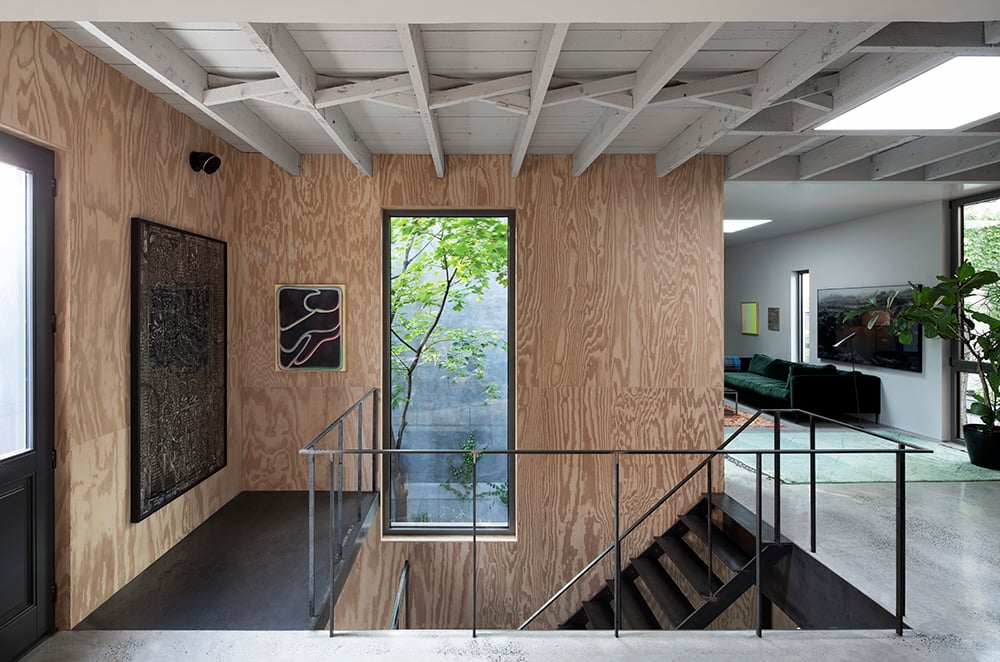 The ground floor fits two bedrooms comfortably, while a generous shared washroom features a hidden terrace inside the mid-block light well. A black wireframe steel staircase, designed to feel as open as possible, also contains the entry vestibule closet without crowding the floor plan. Upstairs, necessities like a home office and powder room surround a central structural column, leaving the rest of the floor, which contains the kitchen and dining zone, as open as possible. Two full-height windows mark the moment where these open spaces flow from the original structure into the extension’s living room, helping ground the home’s modest interior in its surroundings. 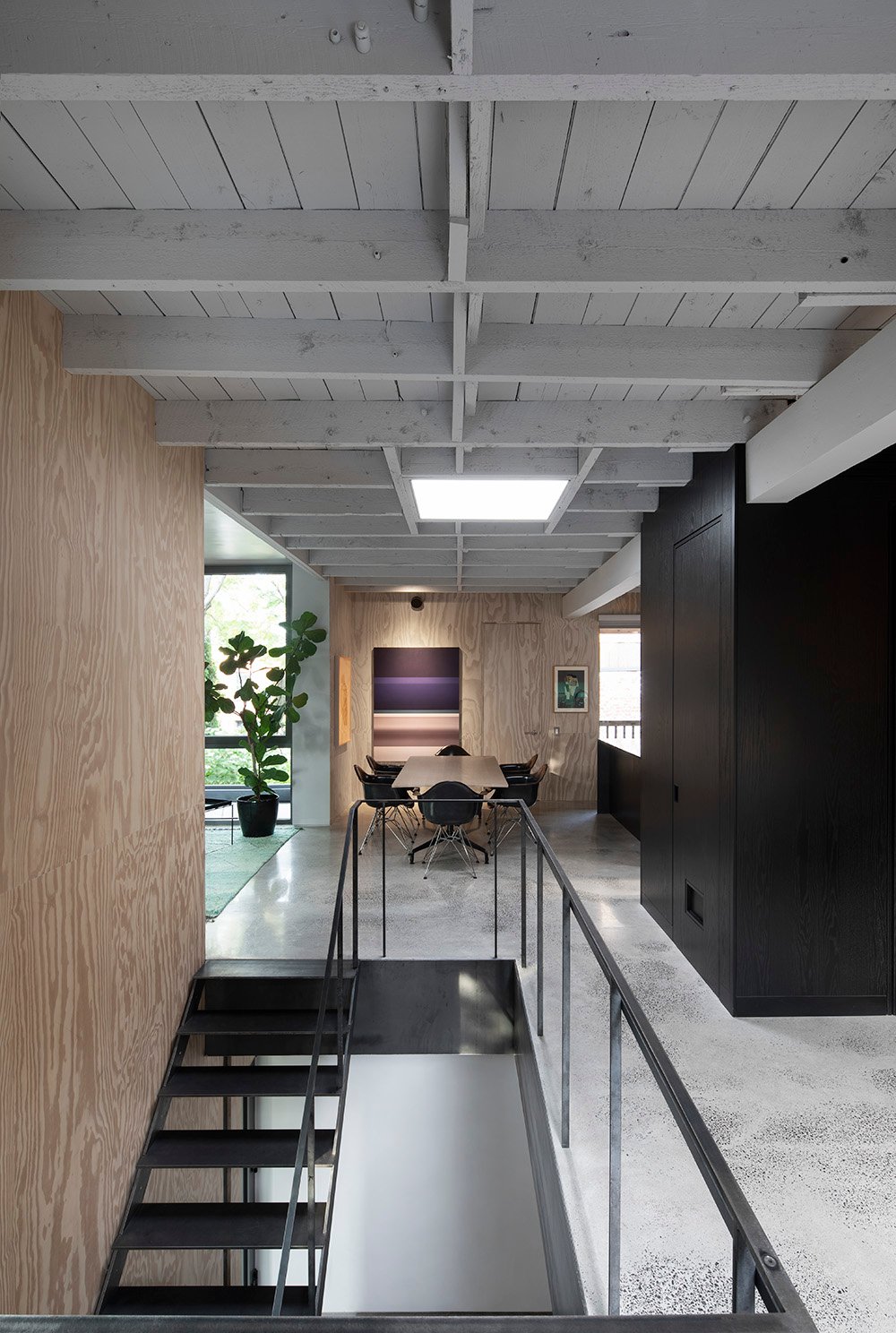 Clad in galvanized metal, the floating extension modifies the century-old carriage house to its right.

That the 28-square-metre extension refuses to conceal itself in this heritage neighbourhood is thoroughly intentional. As a part of its pitch to Plateau-Mont-Royal’s design review committee, T B A argued against policies that push a return to the building’s original architectural features, which Balaban suggests can erase an area’s cumulative history. “There’s a richness that results from different elements layering together,” he says. “It represents the actual heritage of the neighbourhood.” 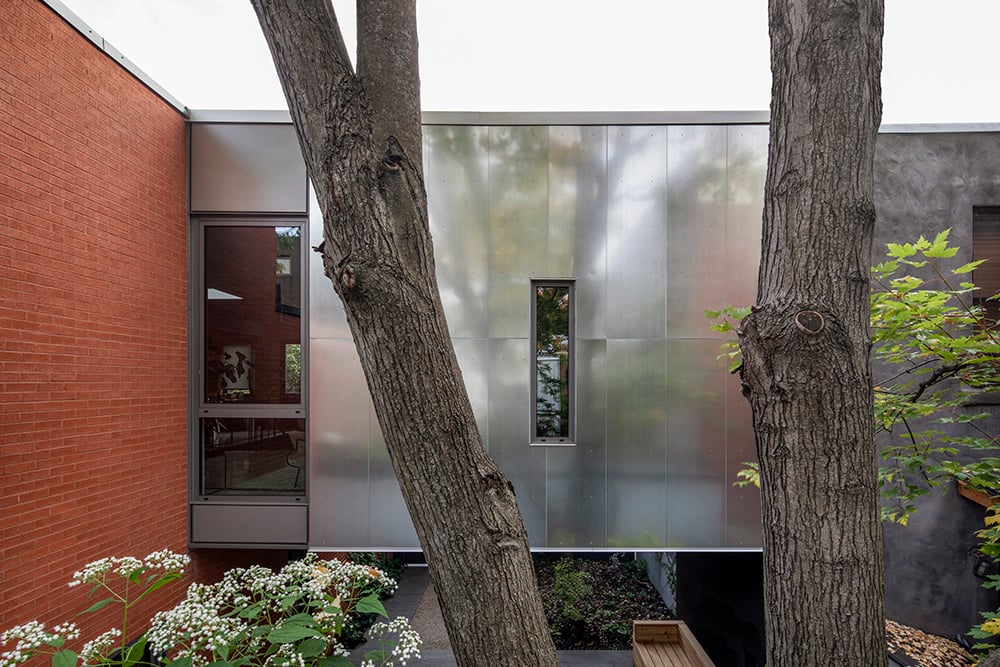 Pulled back from the street and sheltered on both sides by mature maples, the shimmery box adds something new without hiding or dominating. Inside, strategically placed windows frame views of the maples, a nearby green roof and the eclectic streets beyond the odd little lot where this intervention has made a home. 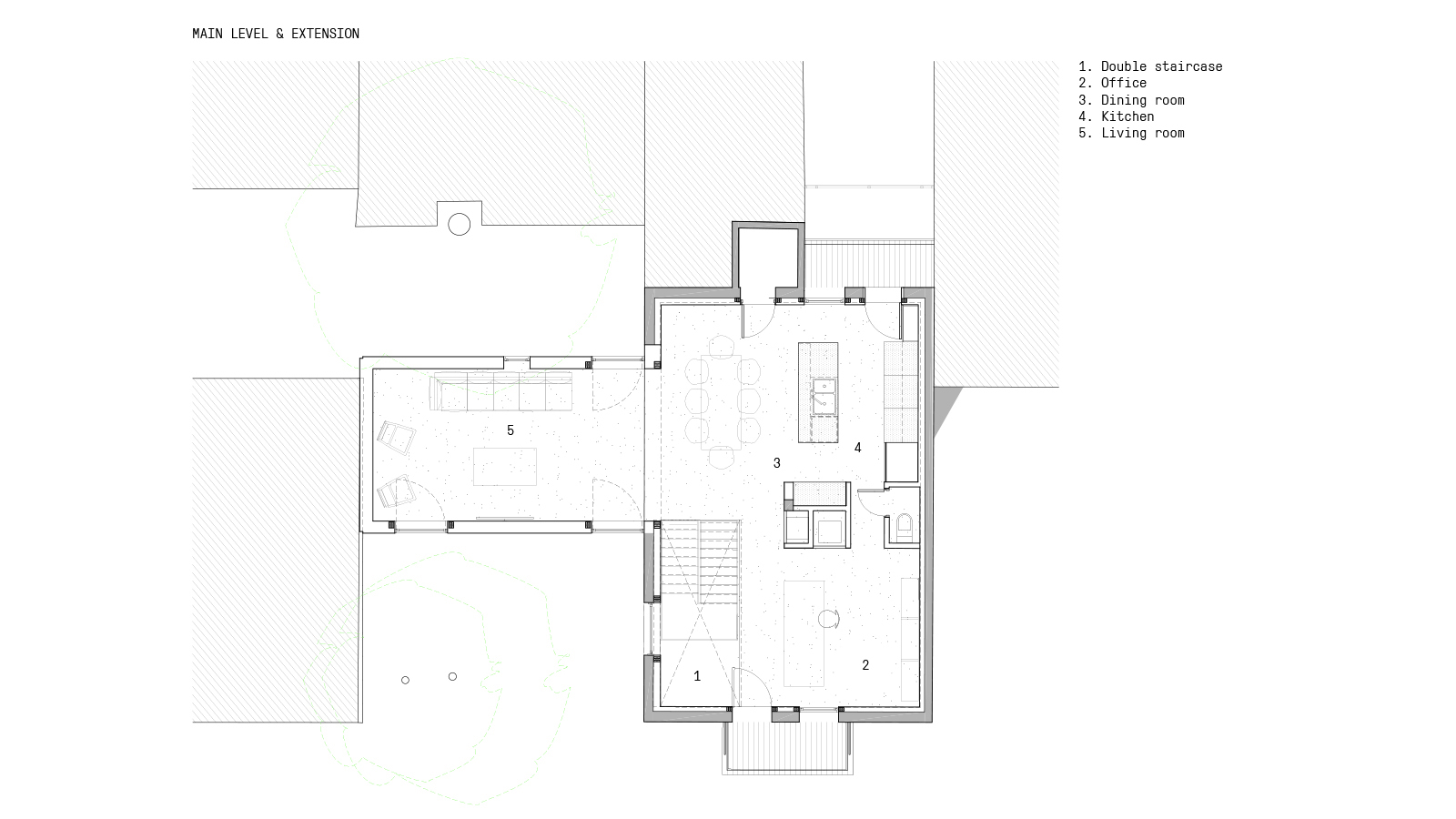