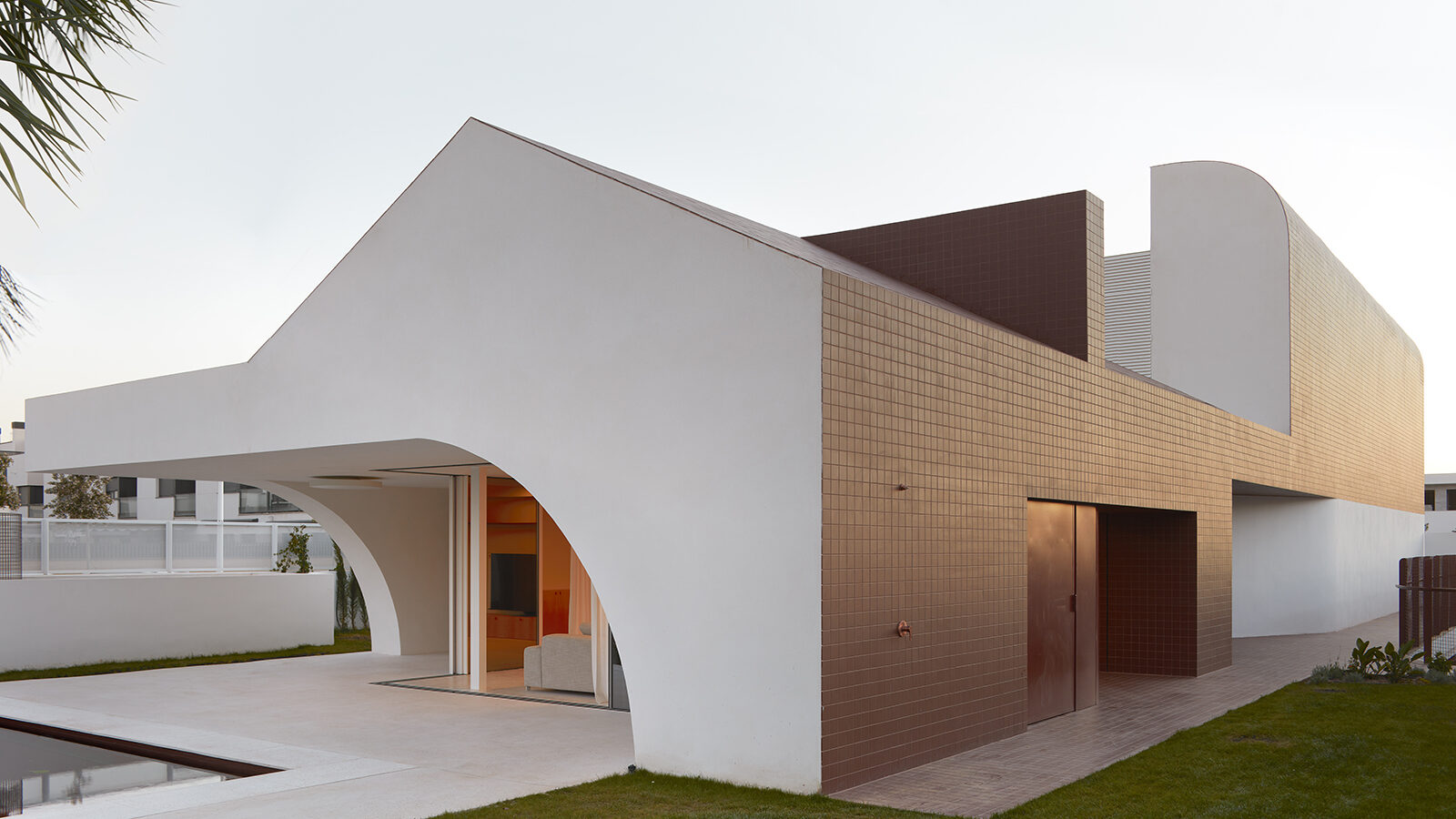 Spain’s Horma Estudio crafts an expressive home that contrasts shapes, textures and tones at every angle.

From the landscape to the doorknob. For Horma, the Spanish studio behind Casa DM, each residential project is a holistic exercise that encompasses both the grand scheme and the smallest detail. That explains why Casa DM feels like a thoughtful assemblage, with curved volumes meeting straight edges and off-white lime facades contrasting with tile grids in terracotta hues. 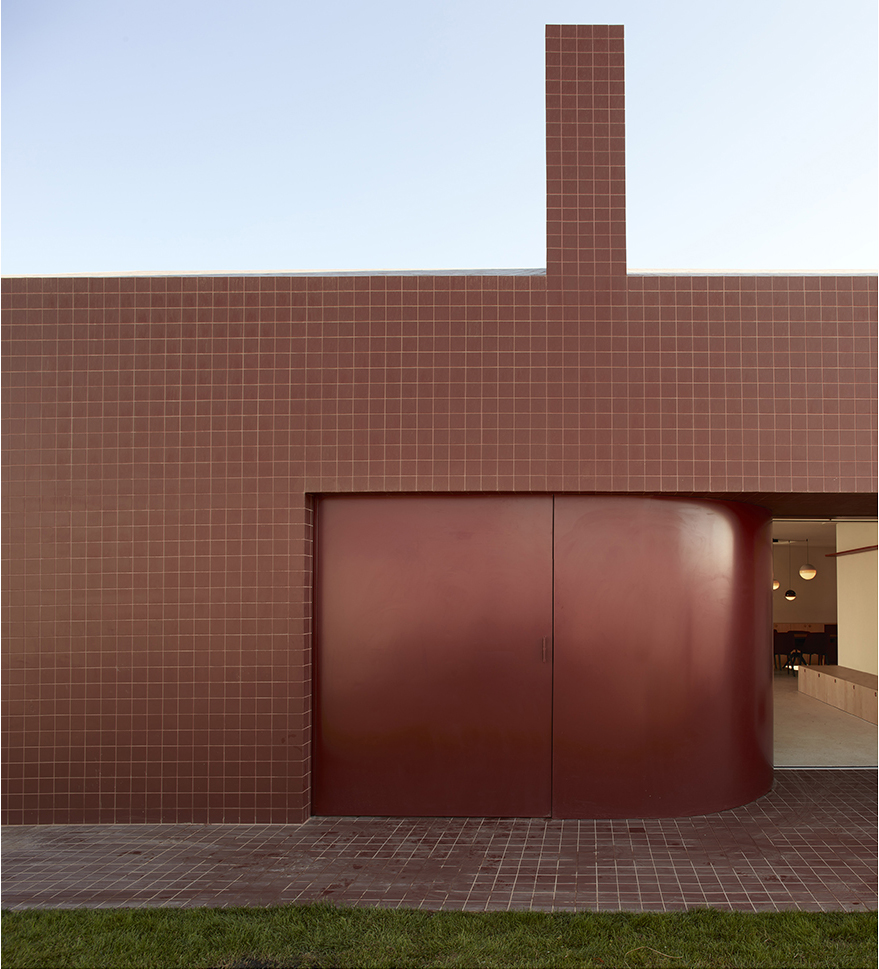 This particular finish is exemplary of the studio’s overall approach: “The exterior tile interests us for the colour, texture and relationship with the landscape. Since it’s the opposite of green, it highlights the greenery around,” says Nacho Juan, one of Horma’s three founders. “But it also has a constructive side that demands precision: It gives us a small metric to measure something very large.”

On a broader scale, the long and linear 500-square-metre home, built for a couple with two children in a single-family-home enclave of Puerto de Sagunto, near Valencia, appears different from its various angles. It takes on the peaked roof of a traditional abode at its east-side entrance — where expanses of sliding glass open it up to the outdoor pool — while its opposite end exudes po-mo-by-way-of-Spain. Since the clients wanted to live on one floor, the architects planned all the spaces, both private and communal, on the main level, with programs like the living room and kitchen gathered toward the east and the three bedrooms spread out toward the west. 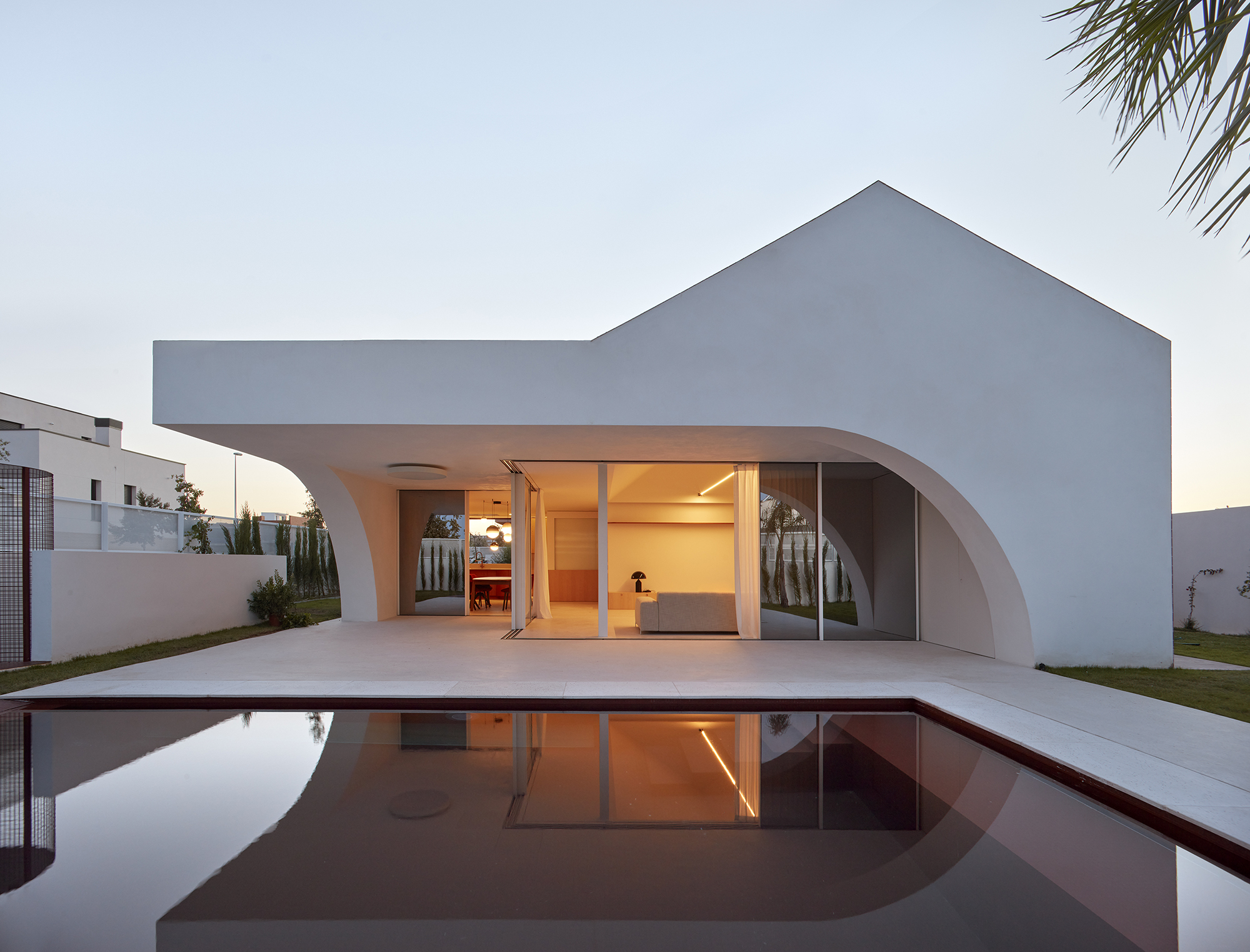 The living area spills out to the patio and swimming pool. Fullheight sliding doors of reflective glass provide sweeping views out and limit views in.

Later on, they decided to add an upstairs guest floor with two bedrooms and a study, and then a basement for activities: a cinema, a small heated swimming pool and an area for games or parties. The interior details balance an eclectic style with a refined sensibility. The terrazzo flooring is embedded with small stones that match the rusty red of the exterior. The home’s furniture, both specified and bespoke, also picks up this accent, from the dining room’s Marset lights to the kitchen’s 1970s-esque curvy island, which is crafted from a deep-toned cherrywood that brings out the light maple cabinets. Rather than levers (the firm eschewed hardware wherever possible, except for the statement doorknob at the main entrance), a repeating circular handle is cut into much of the millwork, one that echoes the home’s motif of shape and void. 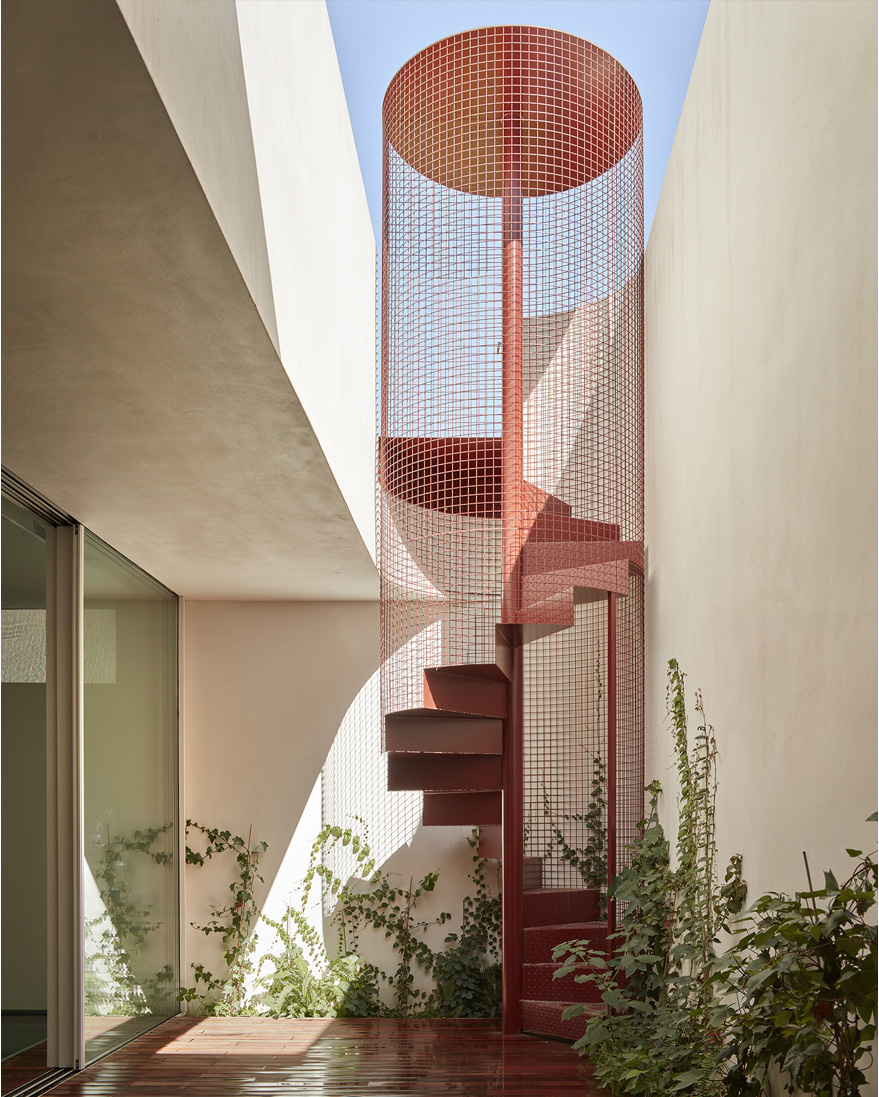 A spiral stair wrapped in metal mesh leads down to an internal courtyard adjacent the basement.

Expressive gestures inside and out connect enclosed volumes and wide-open spaces. One of the major features is a courtyard staircase, which leads from the main level to the basement pool and is wrapped in a metal-mesh cylinder. The decision was born of pragmatism — the clients were afraid the stair would otherwise be unsafe for their kids — but the result is sculptural. 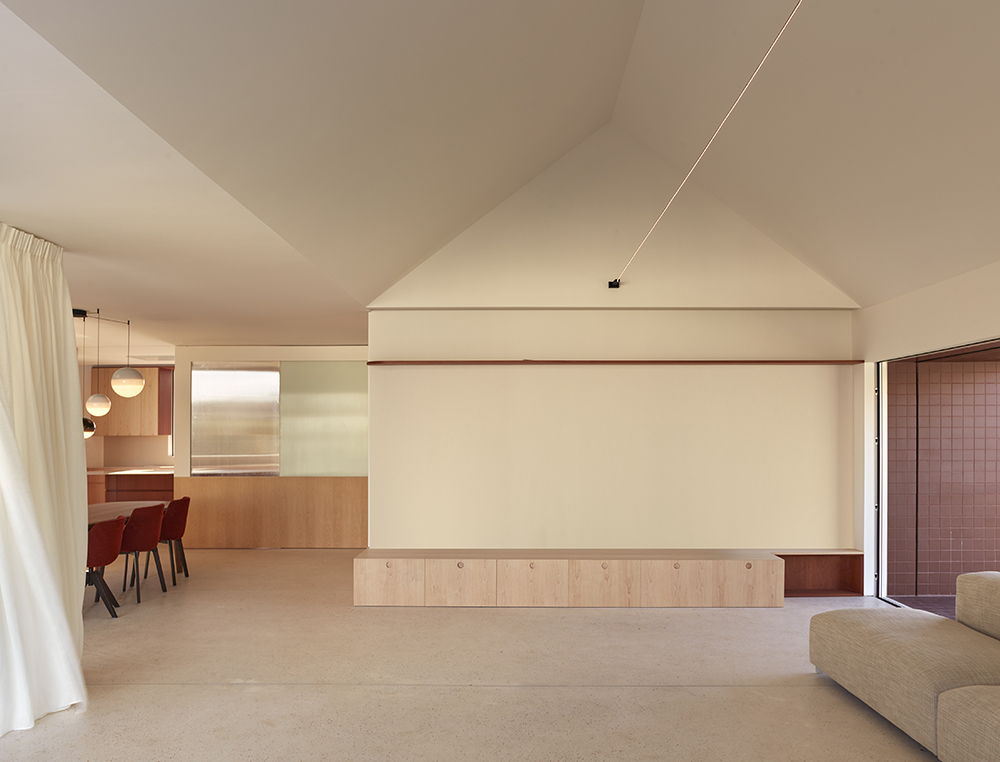 Inside, Horma crafted bespoke millwork in cherrywood and maple, with circular cut-outs in lieu of hardware. Dining table by Porro; chairs by MDF Italia; lighting by Marset (over dining table) and Davide Groppi.

The lines between interior and exterior are further blurred by the numerous entry points, many of them automatic sliding doors with tinted glass that’s reflective on the outside for privacy. “We have a special way of understanding the program by the transitions in the entrances,” explains Juan. This desire to bring the outdoors in also applies to the opaque back facade: It all but blocks out views of the surrounding buildings, which constituted an eyesore, but still lets in light via a narrow skylight.

“The exterior tile interests us for the colour, texture and relationship with the landscape. Since it’s the opposite of green, it highlights the greenery around.”
Nacho Juan, Founder, Horma Estudio 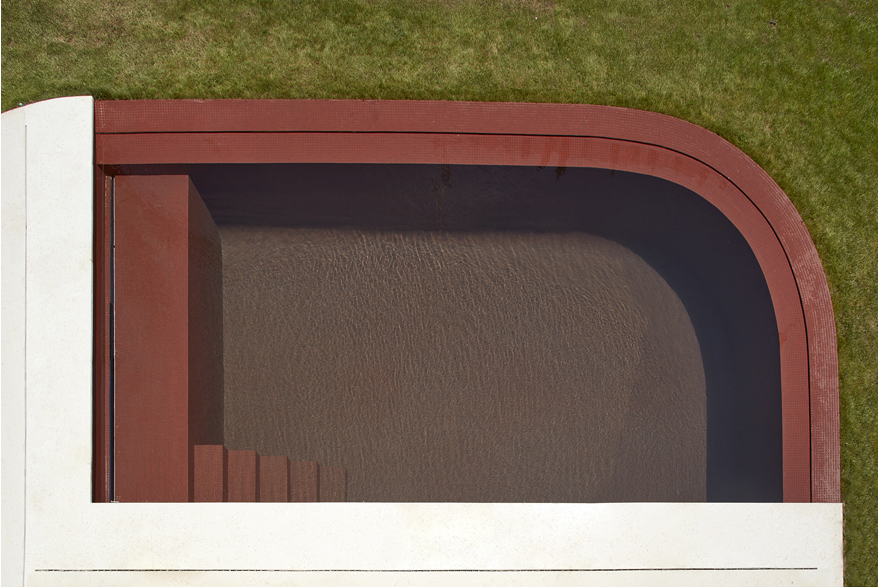 The basement oasis has a poetic sight line to the main level’s outdoor pool.

A small studio led by three partners — Juan founded it with Clara Cantó and José Iborra — Horma is named after the Spanish word for shoe last. “It’s the thing that gives shape but then disappears,” Juan explains. Across their portfolio, common characteristics emerge, including clean lines, a playful use of geometry, warm materials like bricks and tiles, and a touch of the modern Mediterranean movement — they love the work of Spanish architects of the 1960s, like José Antonio Coderch de Sentmenat, Josep Lluís Sert and Antoni Bonet i Castellana. 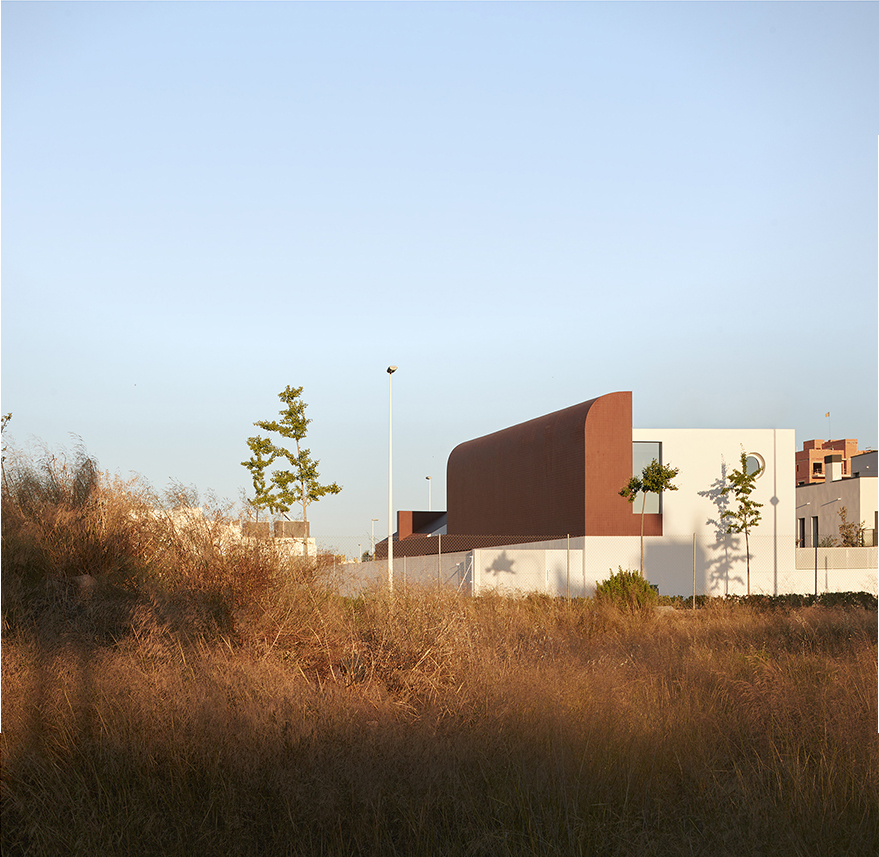 The shapes that intersect to create Casa DM exhibit the modern Mediterranean movement’s playful use of geometry.

While they align themselves with these stars, their beginnings were humble: Opened in 2012, the studio could at first only nail small-budget home renovations. But it was through these projects that they dreamed big. “It allowed us to dedicate a lot of time to very small things, which we studied in great detail,” says Juan. “This generated a way of proceeding that we never abandoned — and that has become what distinguishes us. We dedicate to each project the same attention and affection that we had at the beginning, even if we have changed the scale.” 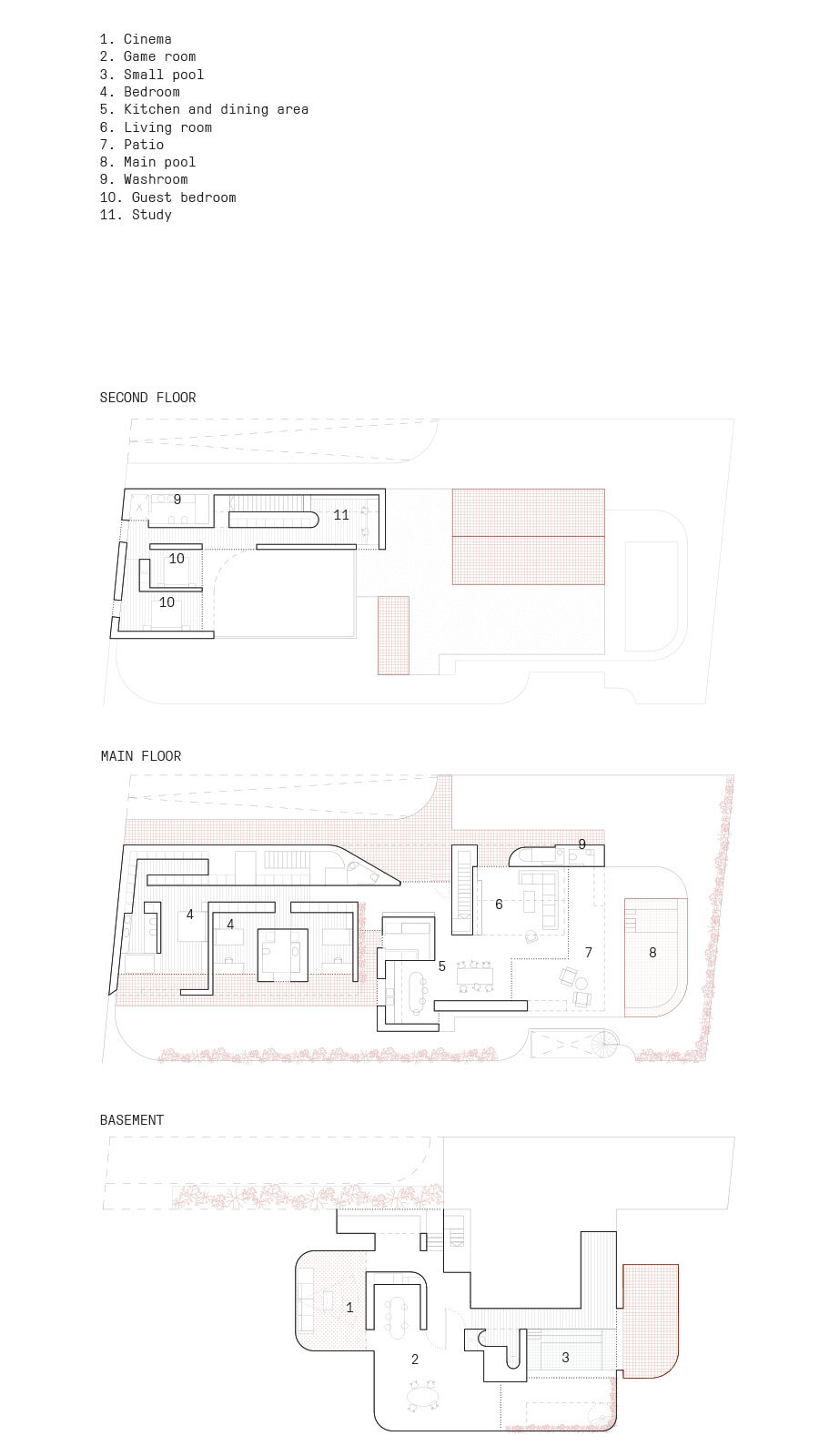 Spain’s Horma Estudio crafts an expressive home that contrasts shapes, textures and tones at every angle.