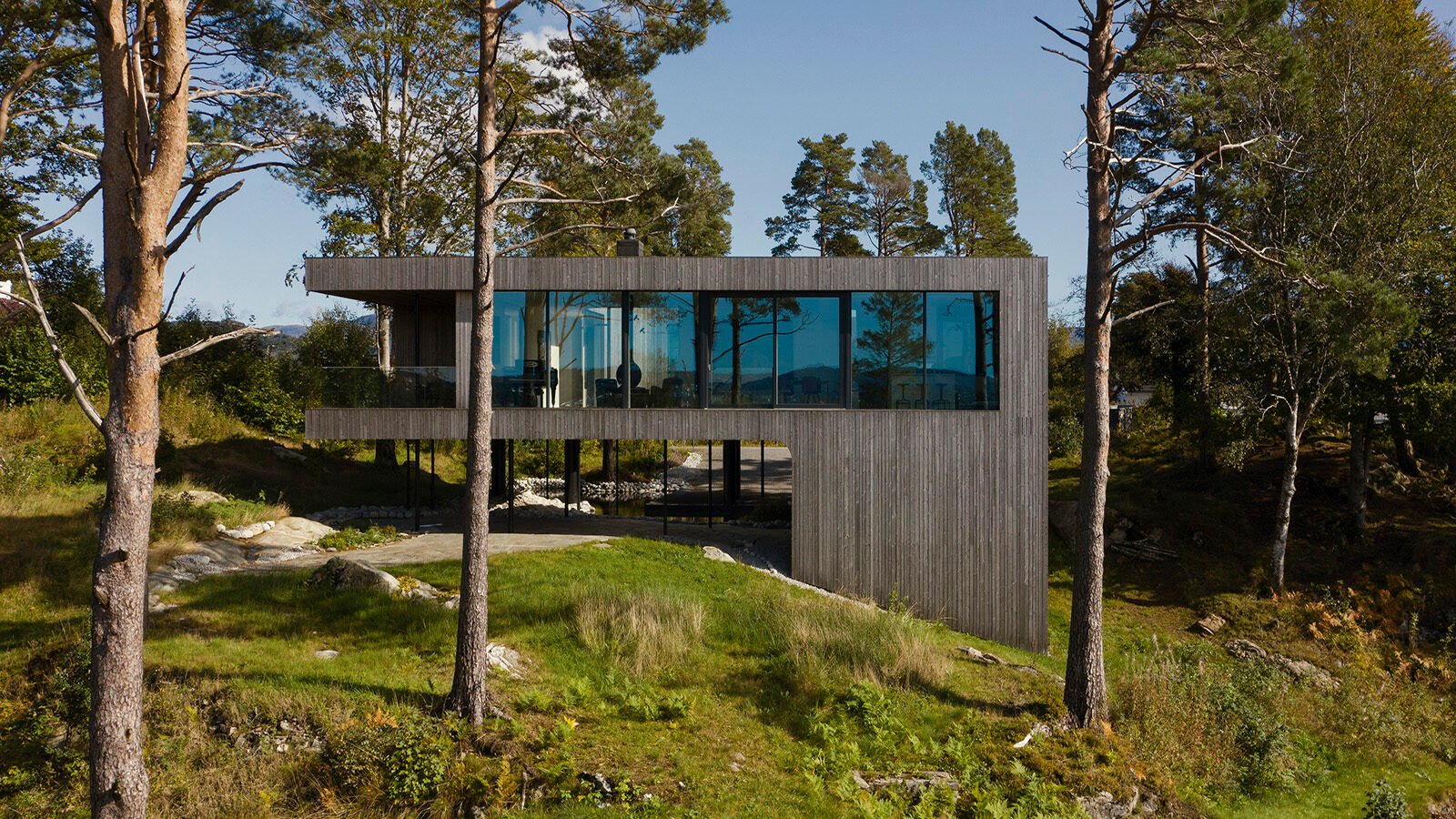 Todd Saunders Draws a Line in the Air in Bergen, Norway

Designed for a composer and his family, Villa Grieg is a looped structure that touches ground with a wedge-shaped music studio.

In designing Villa Grieg in Bergen, Norway, for a musician and his family, Saunders Architecture has composed music for the eyes. From a distance, the house on a hill overlooking Lake Nordås appears as a mirage, a seemingly impossible cantilevered loop barely resting on a forest of slender pilotis. Closer up, though, the building reveals a practical duality: as a sound box that shuts out noise from a nearby road and as a viewfinder that lets the residents frame layers of their surroundings. 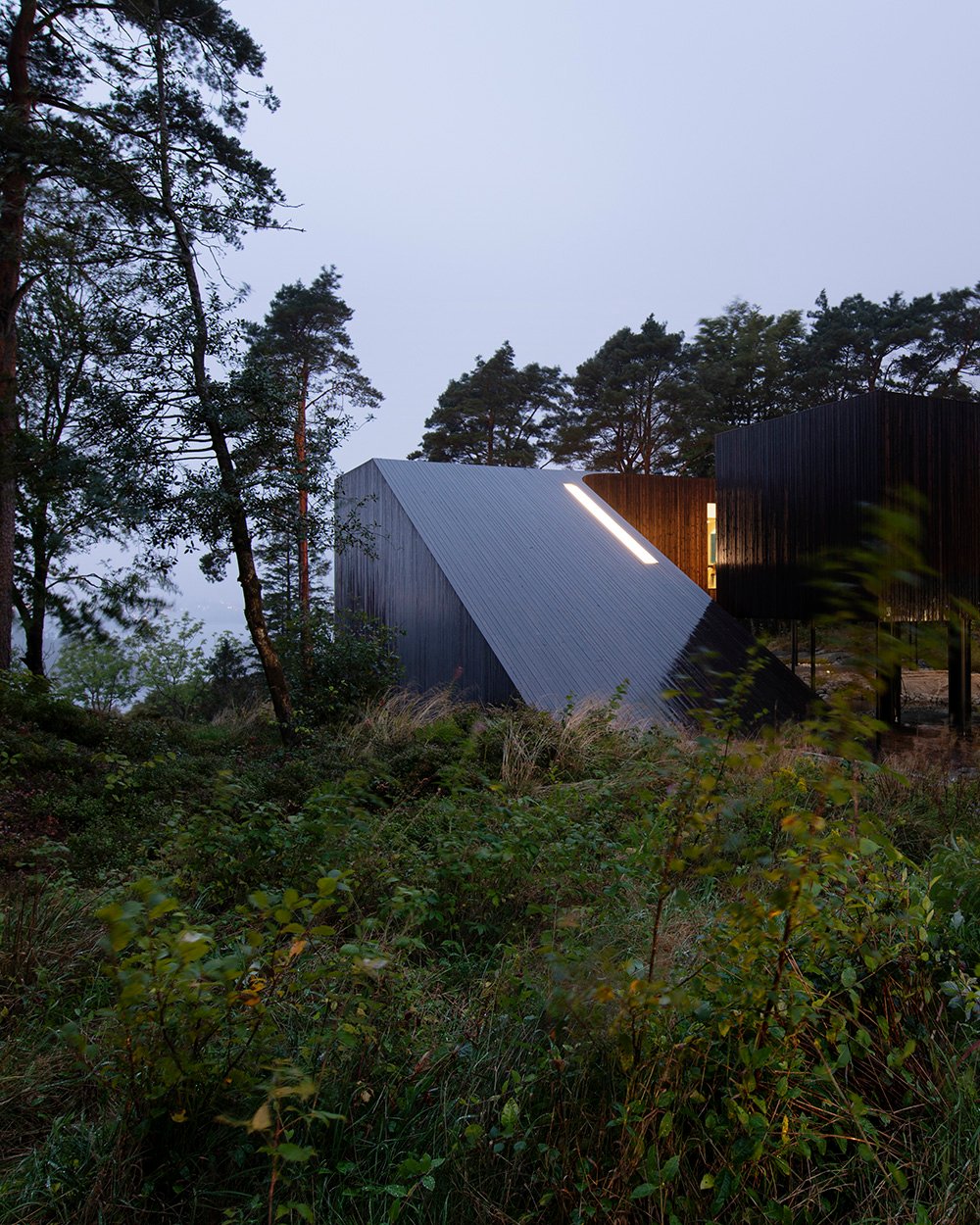 Designed for a musician and his family, Villa Grieg is a loop of a building clad in Kebony to blend in with its forest surroundings. It touches down with a wedge-shaped music studio.

Todd Saunders, lead architect on the project, describes the house as one built for the senses — for playing, recording and listening to music, for contemplating art and for absorbing the natural landscape outside. “It’s silent, contemplative,” he says. “Even the forms are slow and quiet.” He’s referring to the material simplicity (concrete for the foundation and main structural wall, drywall-covered steel and wood studs elsewhere, and Kebony cladding), and, more importantly, the single uninterrupted line that makes up the footprint.

He’s not speaking metaphorically — at least, not entirely; physical silence was a necessity for the owner, a double bass player and recording artist who is a direct descendant of the great composer Edvard Grieg. (The legend’s former house, now part of Edvard Grieg Museum Troldhaugen, is situated within earshot of Villa Grieg, just down the hill.) 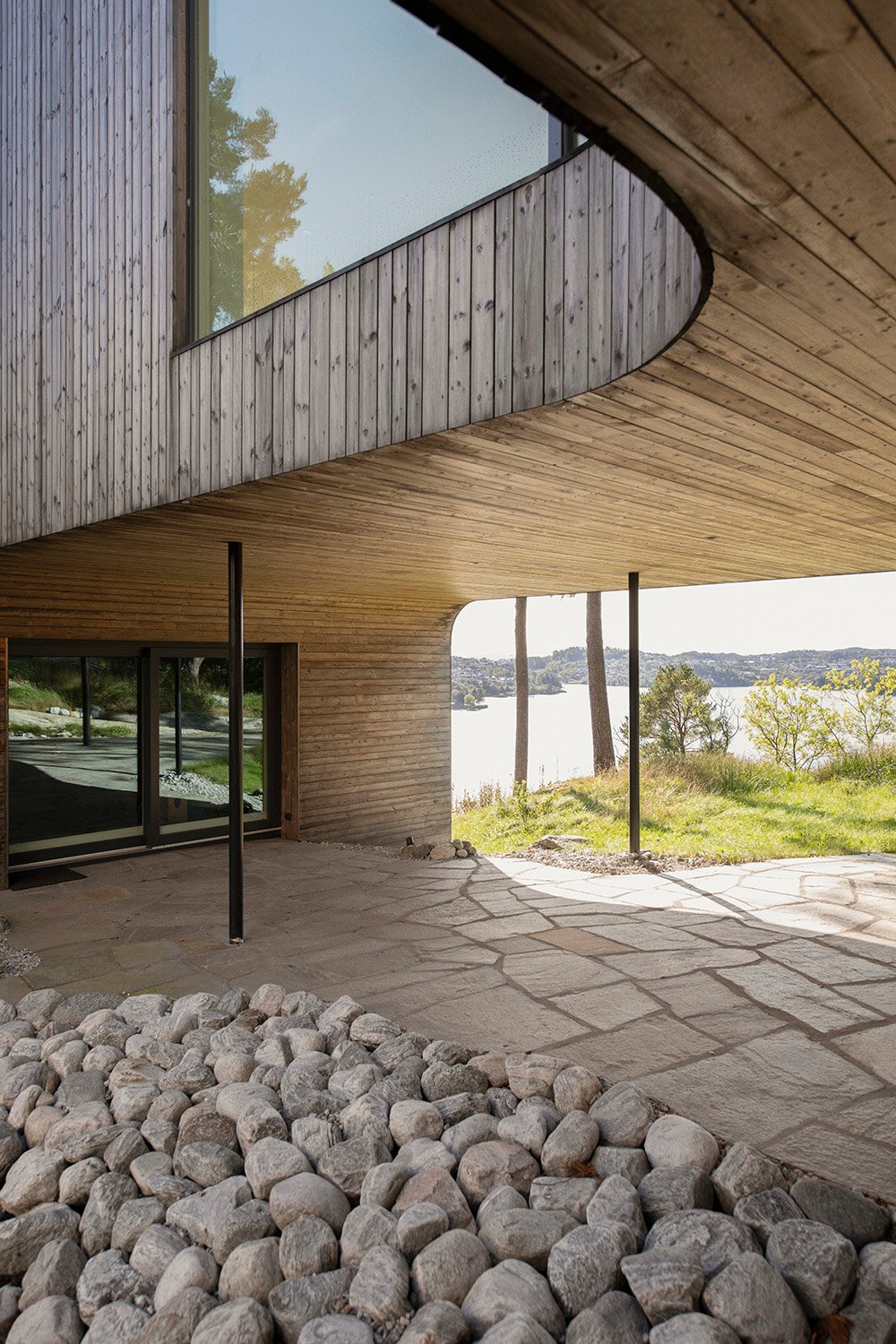 The house’s concrete foundation and main column perform much of the magic, supporting a living area bookended by a covered balcony.

At a modest 286 square metres, the home is laid out on two storeys. Wrapping around a courtyard, it takes you on a journey that starts at the ground-floor entrance and comes nearly full circle in the main floor’s primary bedroom. The entrance leads into a wedge-shaped volume that houses a soundproof music and recording studio (where the musician owner has worked with Norwegian folk-pop duo Kings of Convenience, among others). From there, you travel up a long, narrow staircase to the main floor, guided along the way by a slit of a skylight on one side of the sloped ceiling, as if someone had cut a gash for the blue yonder to bleed through. 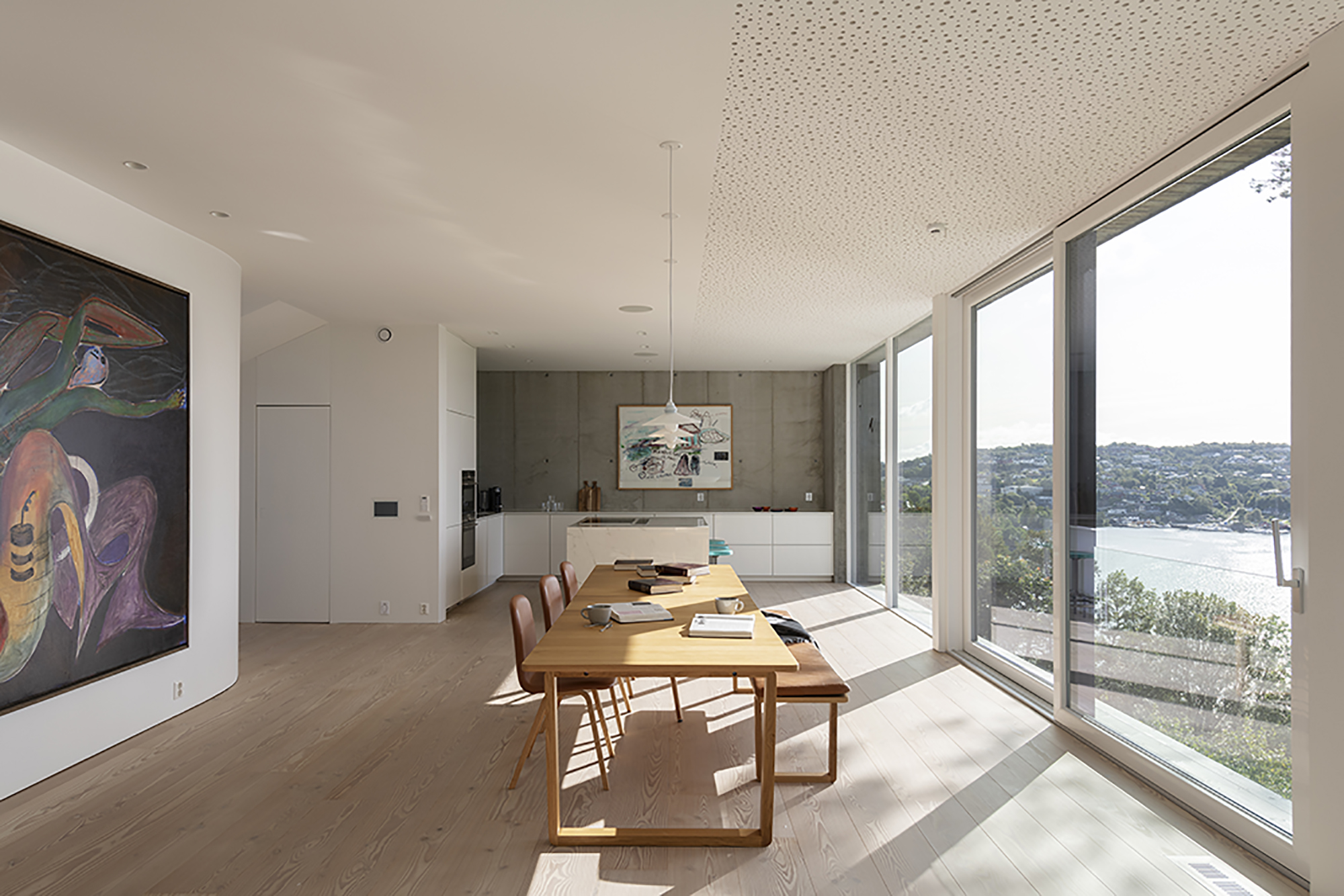 This sky view connects with the light-flooded open section that contains the kitchen, dining room and living room, all of which offer a wall-to-wall panorama over the lake, including a covered balcony off the living room that’s pulled away from the sound of traffic. Beyond this area, a hallway that hugs the inner wall of the courtyard loop leads to one of only two bedrooms and past a library before culminating in the main bedroom. The end of this trajectory underscores the project’s layered intricacy with sight lines out to the courtyard and a restored pond below. 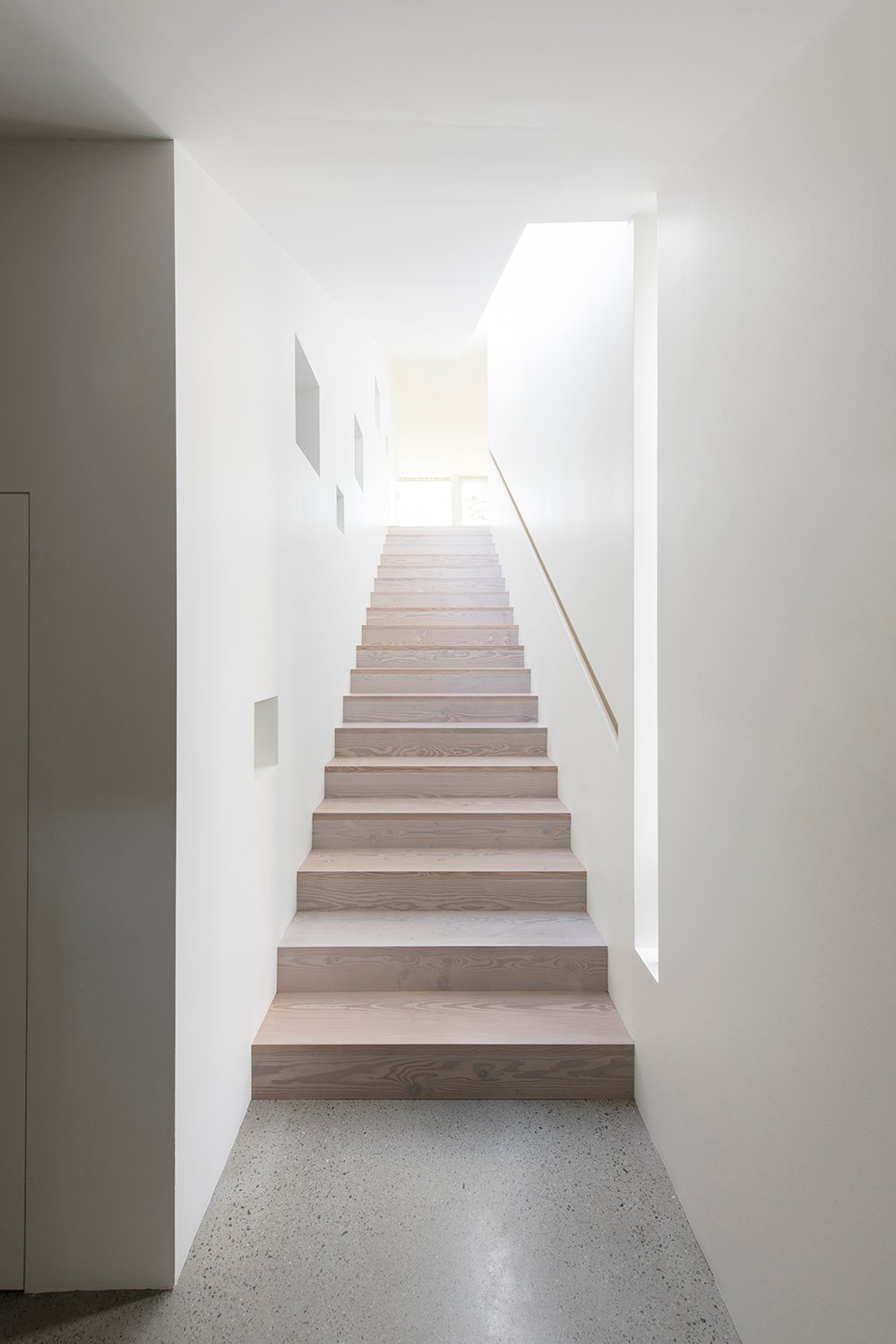 A dramatic skylight slices the wall of the staircase, flooding the ascent from the groundfloor entrance and music studio with light. 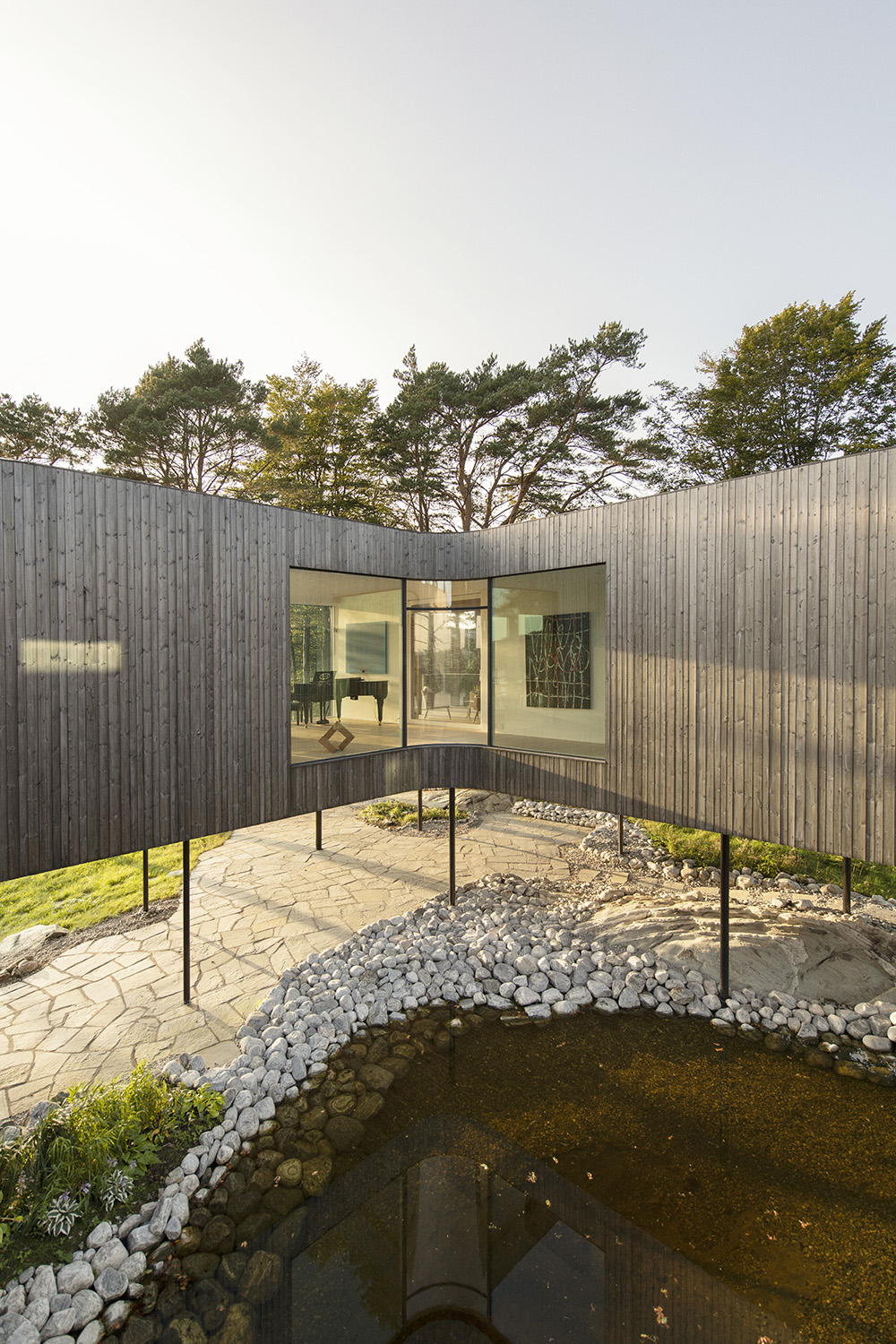 The living area — complete with piano — features a view through one of the building’s curvatures.

Saunders describes the project as “a single line drawn in the air.” To achieve the kind of structural complexity that appears effortless required time and patience — time on the part of the clients to make decisions about their “forever” house and build trust in the overall form, and patience on the part of the architects, who also revelled in this deeply personal creative process. The firm was designing Villa Grieg at the same time that Saunders was building his own house. The client would pass by Saunders’s construction a few times per week, stopping to appreciate the experimentation with long cantilevers. “It was like an education for him; he got more confidence in me as he saw my house taking shape,” the architect says. “Without it, Villa Grieg probably wouldn’t have been built.” 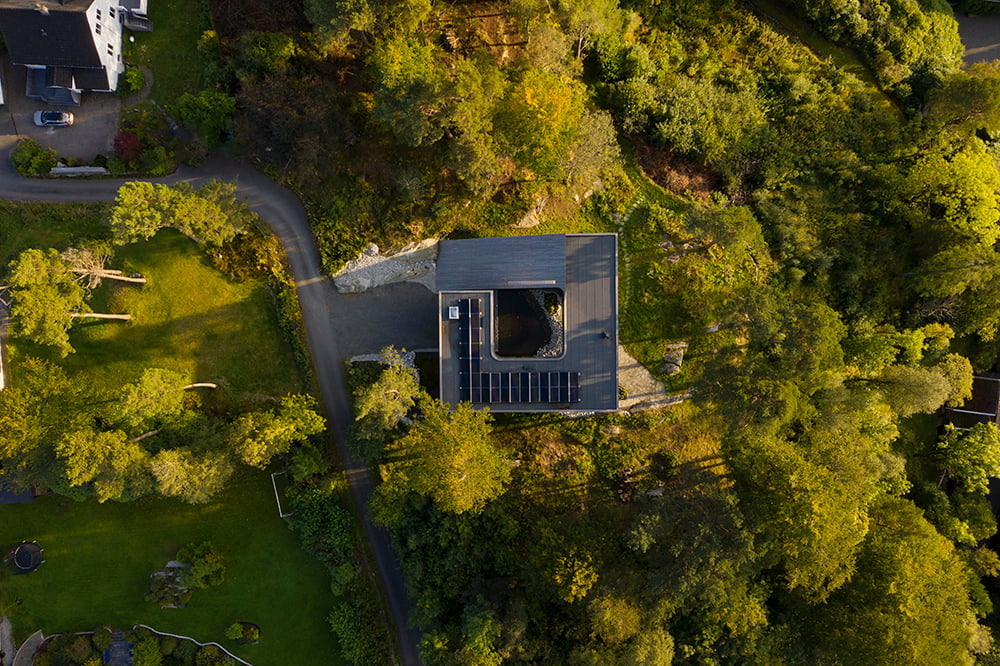 From above, the loop of Villa Grieg fully reveals itself. The rooftop is outfitted with solar panels, which power the family’s electric vehicles.

In the end, Villa Grieg took five years to complete, nearly twice as long as other houses the firm has designed. The final floor plan emerged after some 50 tweaks to the main idea, and while the incorporation of cantilevers and other details had been fine-tuned in previous projects, the home’s swooping gestures proved a challenge. “The curves were hitting each other oddly,” Saunders says. “But we weren’t able to draw them; we had to figure them out on site.”

Ultimately, however, he feels the result is one of the best residences his firm has recently completed. (It helps that it’s also energy efficient, heated by geothermal, while photovoltaic power is used to charge the family’s two electric cars.) “I’m constantly bringing clients here to show them. It’s a beautiful object to look at,” he says. “It wants to be a house. But I think, Is this really a house?” In defying its own walls, Villa Grieg flies in the face of convention, hovering outside the box. 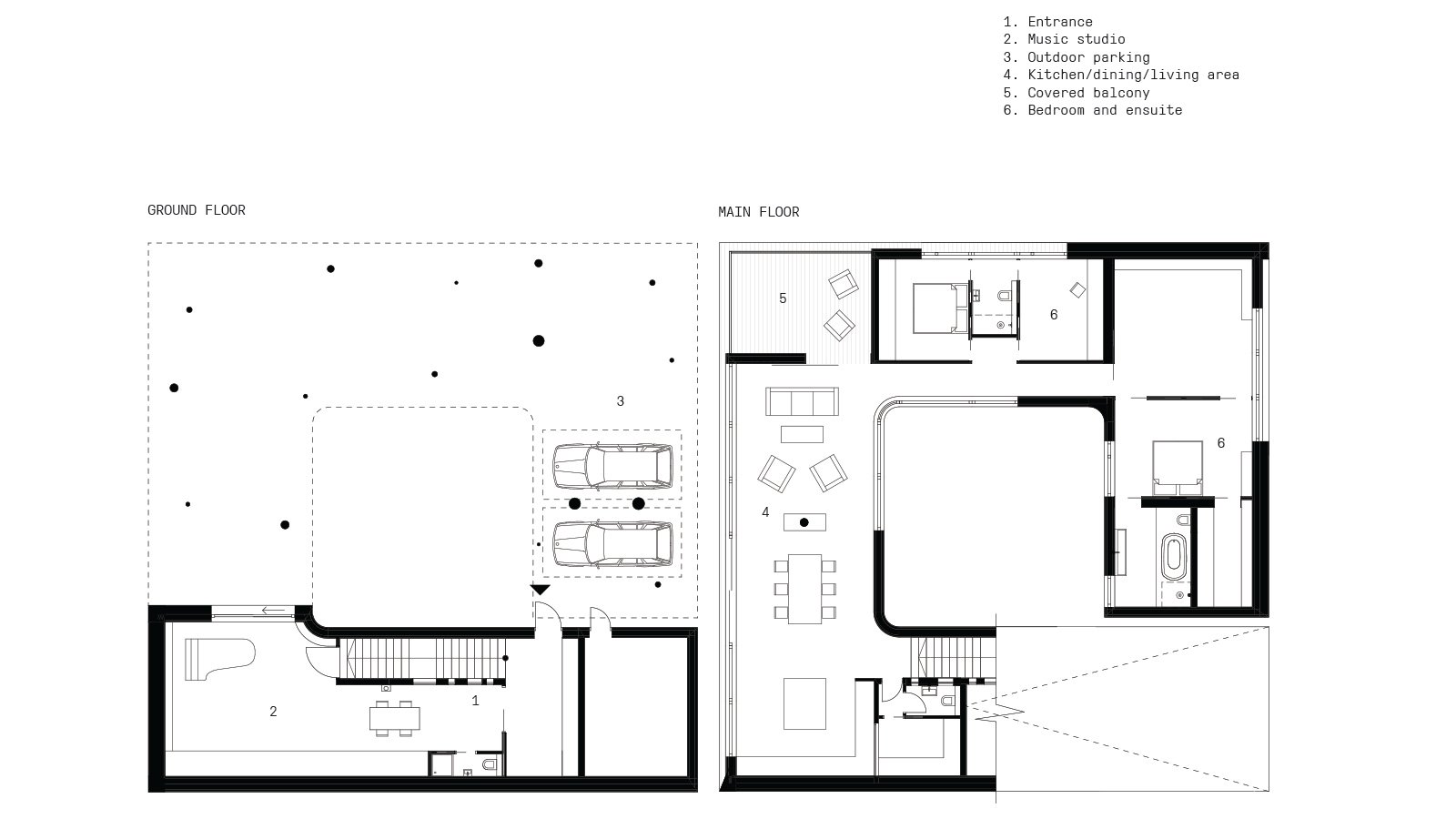 Designed for a composer and his family, Villa Grieg is a looped structure that touches ground with a wedge-shaped music studio.