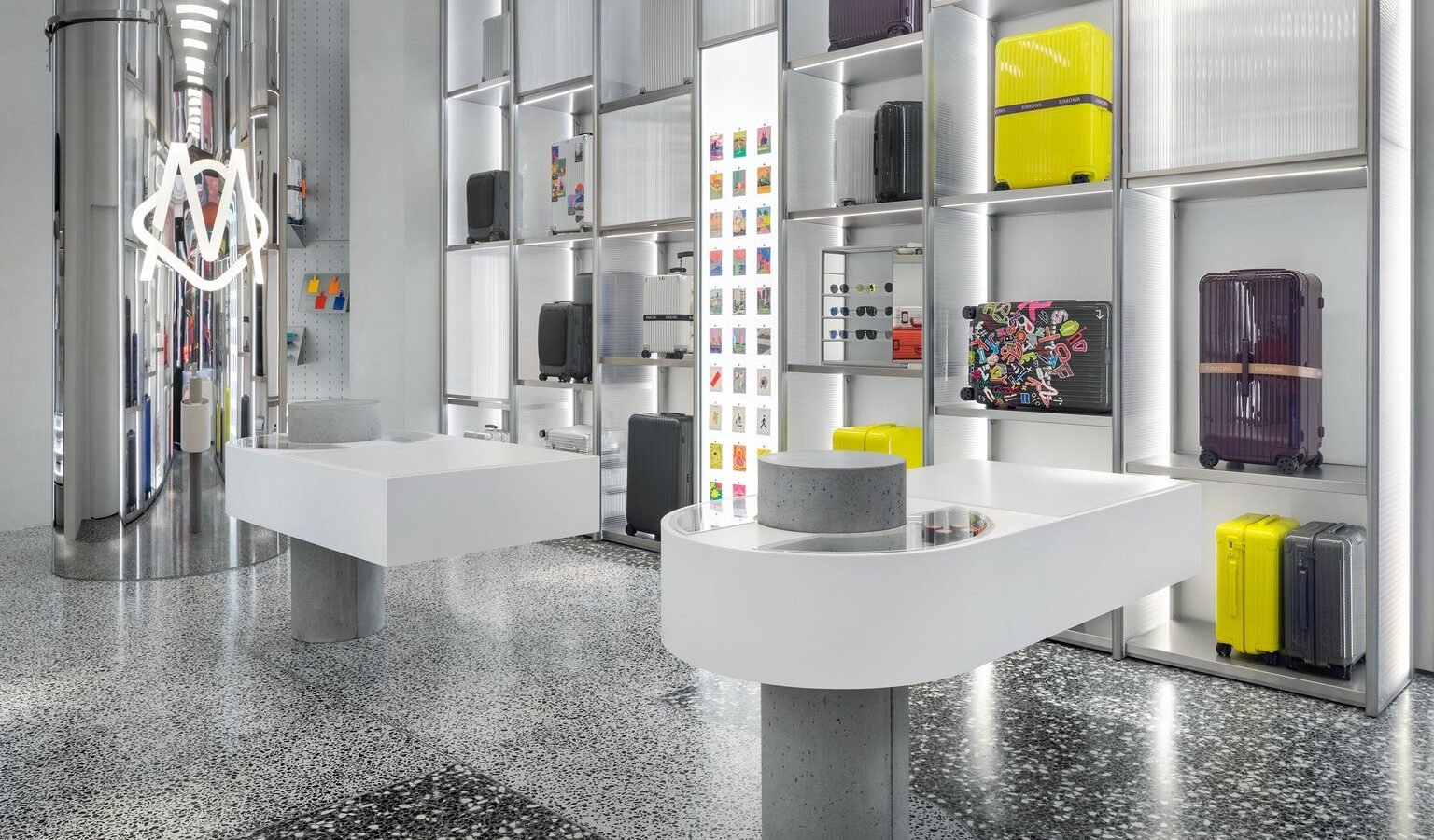 How Shops of Every Scale are Reimagining Retail

The retail industry is open for business — and designers and brands are rethinking the shopping experience from the ground up.

Over the past two years, the old retail mantra “shop ’til you drop” has effectively been replaced by a new catchphrase: “buy less, buy better.” As consumers begin to spend their money more selectively, spaces designed with purpose offer the ultimate reflection of a brand’s commitment to enduring quality.

That said, the next generation of retailers doesn’t just look different — it also serves customers differently, too. By becoming more community-focused, more experiential and more savvy with their floor plans, businesses of every size are leveraging inventive design to maintain an edge in an evolving commercial landscape.

From SMALL neighbourhood destinations to MEDIUM boutiques and LARGE department stores, here’s how shops of every scale are changing the face of retail therapy. 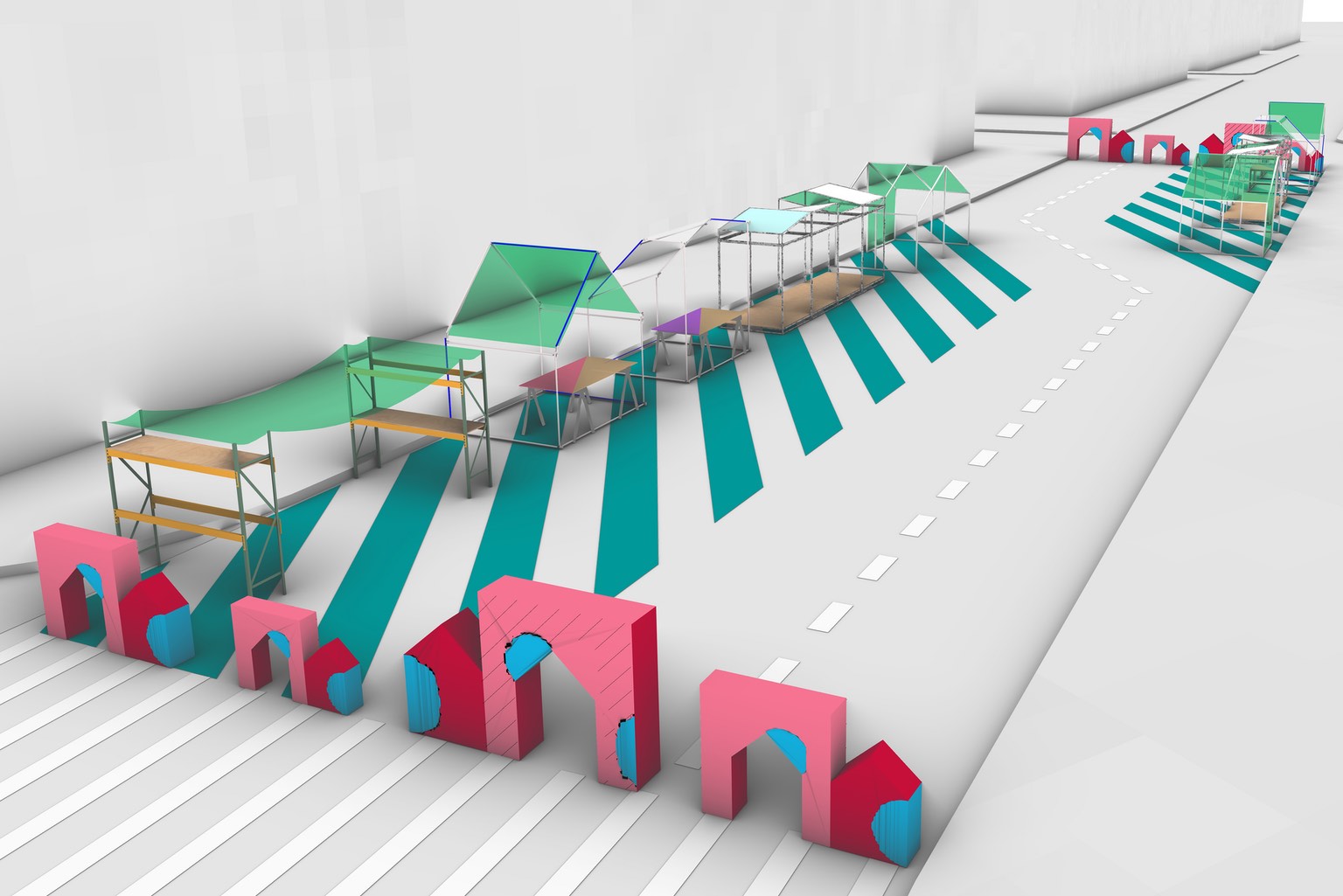 Mom-and-pop shops might not always be able to compete with e-commerce giants on price or speed of delivery, but they can offer something that a multi-national website can’t: a friendly community presence. To play to that strength, indie retailers are working to foster deep personal connections even before a customer steps inside. By developing a bolder street presence, stores are asserting themselves as a vital part of the urban fabric — and encouraging shoppers to keep their spending within local business districts.

Early in the pandemic, many cities were quick to help restaurants recreate their indoor dining rooms in open-air settings by reimagining street parking as pop-up patios. In the spring of 2020, pro bono collective Design Advocates began working with New York’s Neighborhoods Now initiative (itself led by the city’s Urban Design Forum and Van Alen Institute) to develop concepts that would allow local retailers to engage with their customers in a similar way. 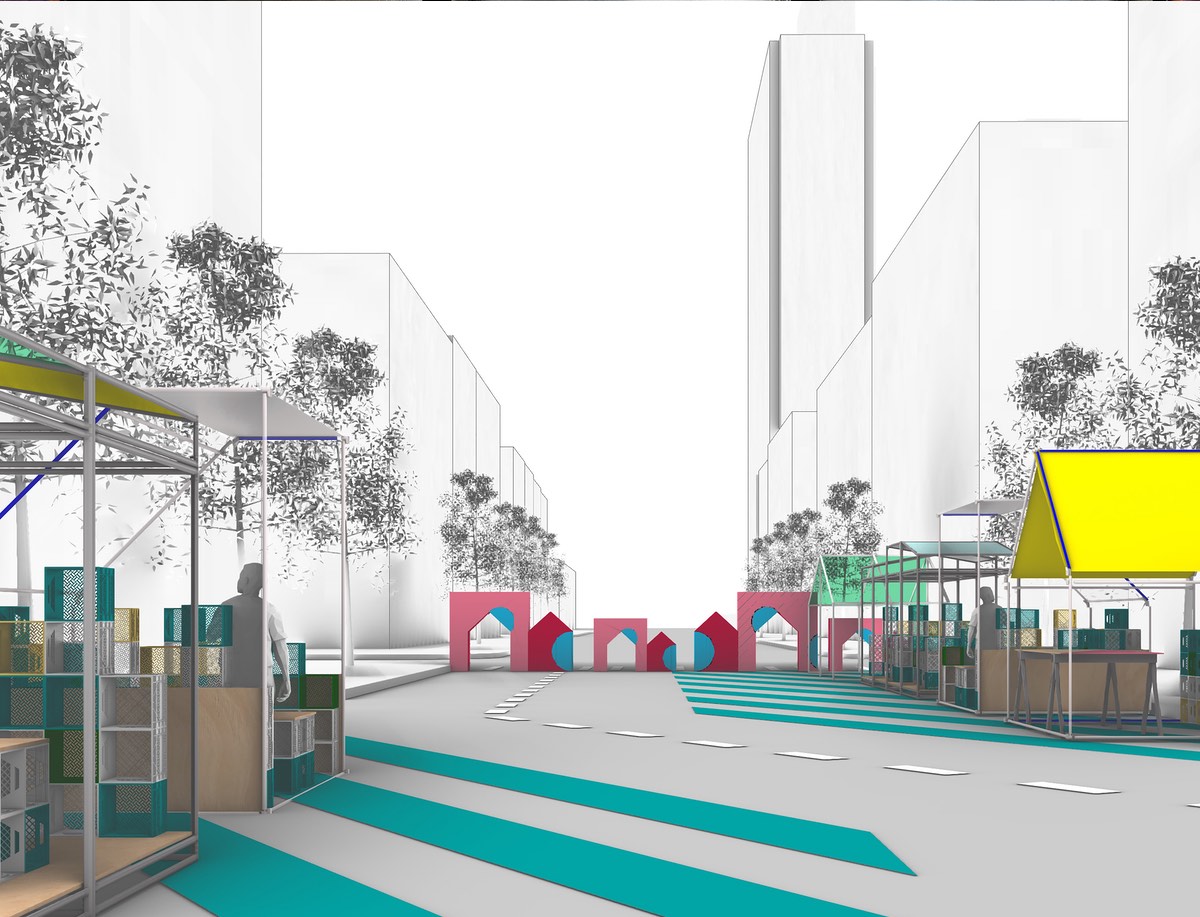 “We now recognize all of this public space that’s just used by cars. By bringing in a layer of formal planning, you can designate clear areas for outdoor merchandise that might otherwise exist in an ad hoc way, and for gatherings that allow for more cross-pollination.”
Alexandra Barker, Principal, BAAO Architects

A team led by architect Alexandra Barker of BAAO Studio focused on the city’s Washington Heights neighbourhood, working with Community League of the Heights to envision low-cost, high personality market stalls and playful geometric barriers that anticipated the type of full-blown street closures later made possible by New York’s Open Streets initiative. Their most impactful idea was also their simplest: temporary road paint to extend the bright colours of the area’s storefronts onto the pavement. “It’s so powerful just painting some fun patterns,” says Barker. “The way that you treat the ground can change everything.” 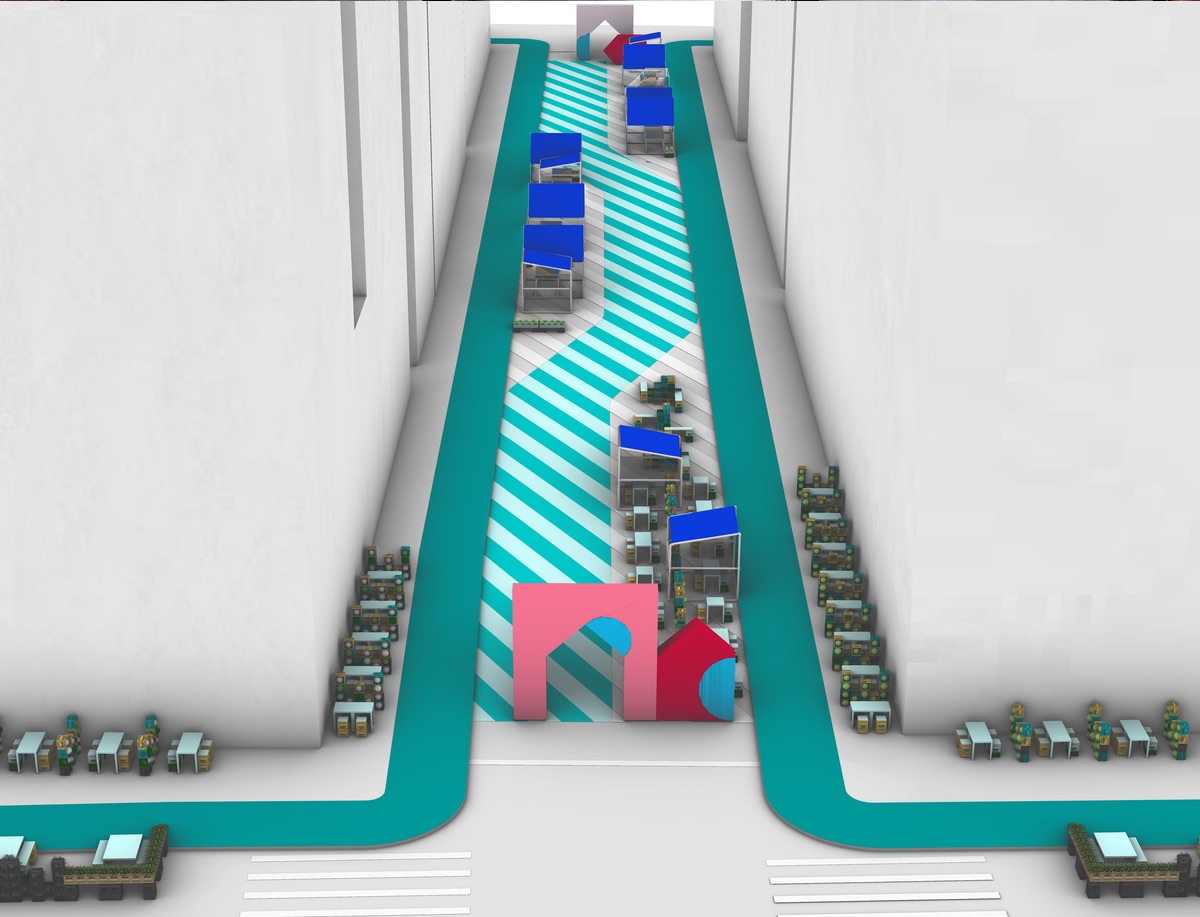 As neighbourhoods look to maintain some of the vibrant, block-party feel that characterized the Open Streets era — whether in the form of temporary street festivals or on a longer-term seasonal basis — Design Advocates is eager to help. It has made its schematics and assembly instructions available upon request through Neighborhoods Now. 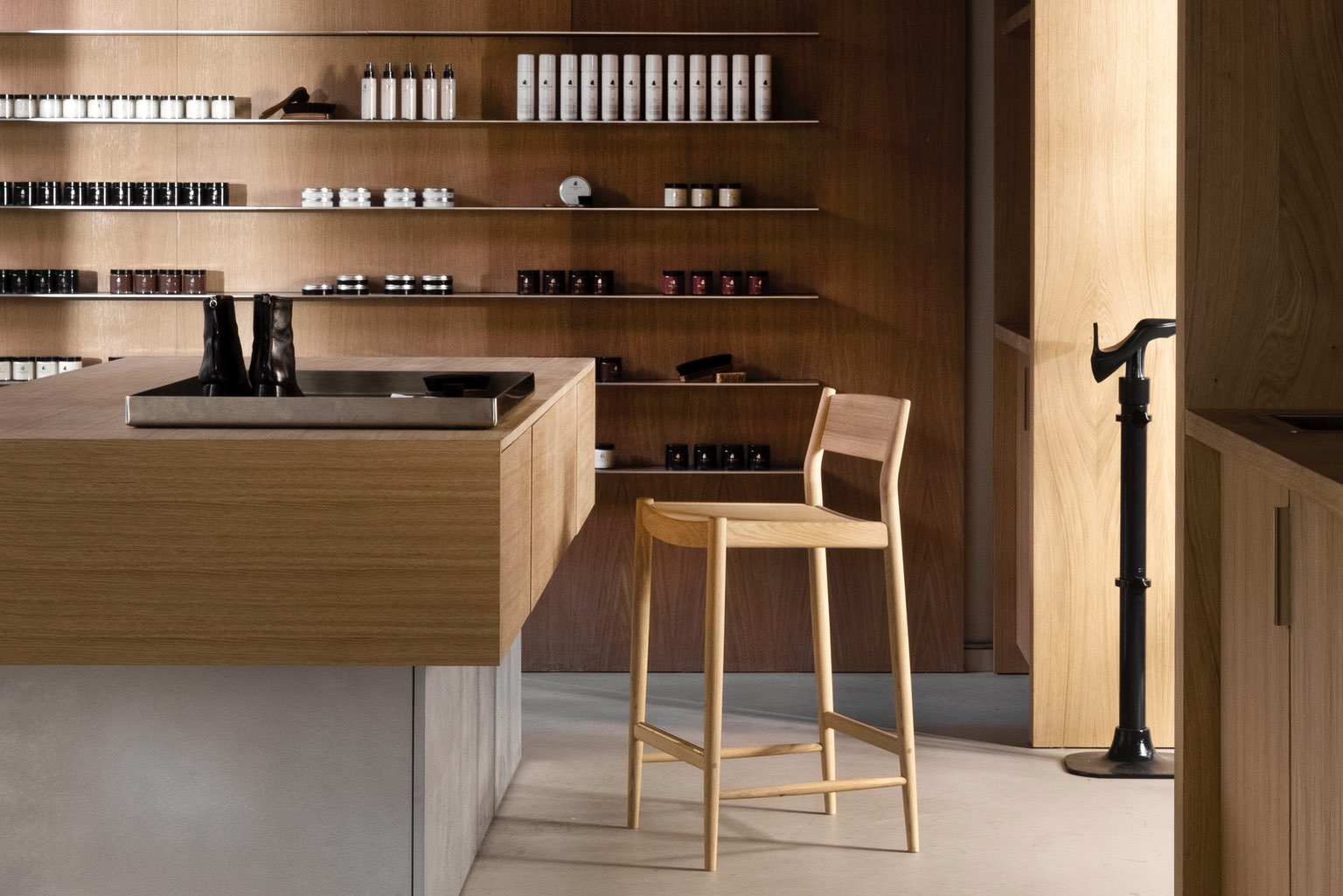 In 2022, an omnichannel retail strategy that treats a brand’s physical and digital storefronts as interconnected entities is a key part of any sound business plan. Today’s shoppers might browse in-store but make their final purchases online — or, in other cases, pre-shop online and pick up in person for expediency. To build lasting loyalty across all channels, brands are paying as much attention to services as they are to goods. Suddenly, a showroom’s checkout counter feels more like a full-blown hotel concierge. 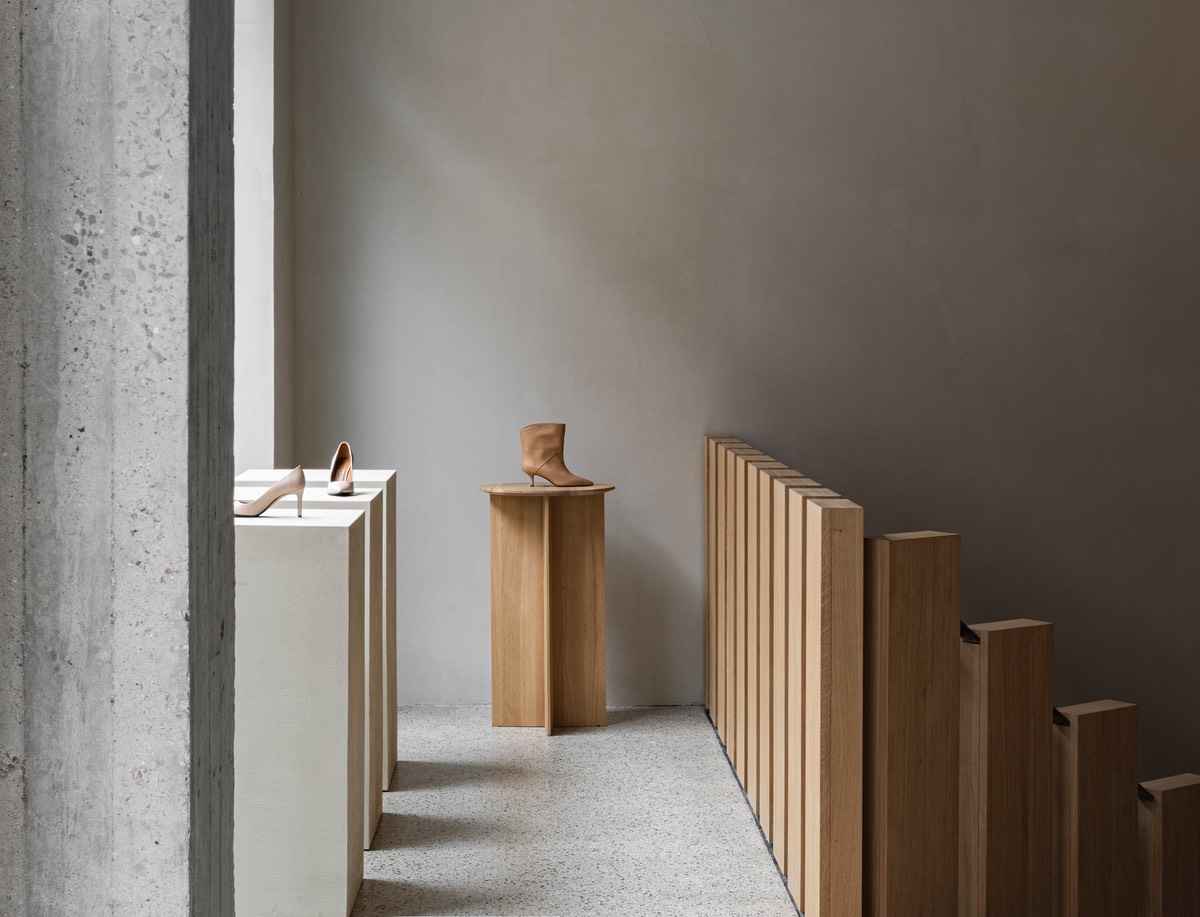 “When you’re in a store where you can see everything all at once, you don’t really see anything at all. The hospitality sector understands how to introduce elements of atmosphere and surprise and create a memorable journey.”
Katrine Goldstein, Norm Architects 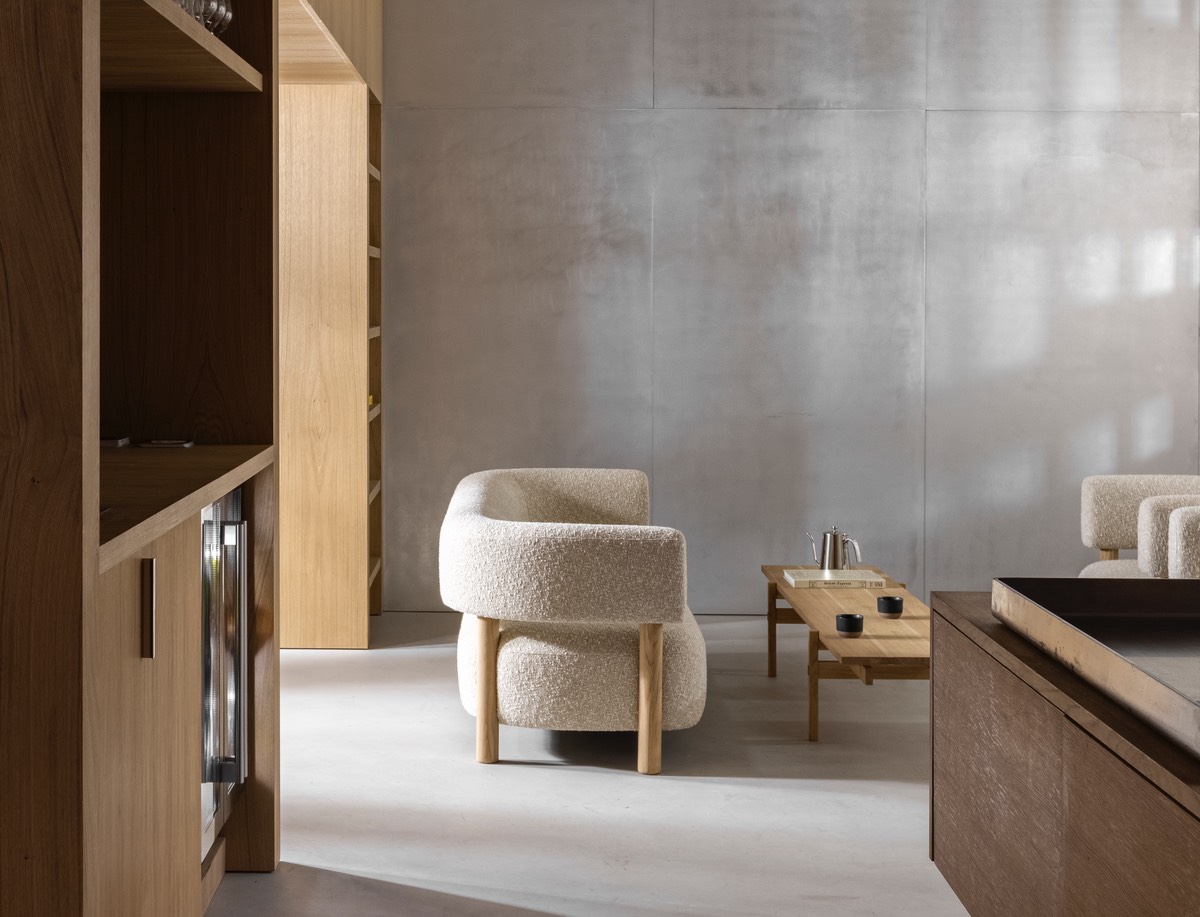 As customers wait, they can slide on a pair of slippers and enjoy a coffee in the basement lounge, which features custom furniture by Karimoku Case Study. Meanwhile, an upstairs atelier offers a look at products still in design. Delivering a full-service experience, the store is definitely a step in the right direction. 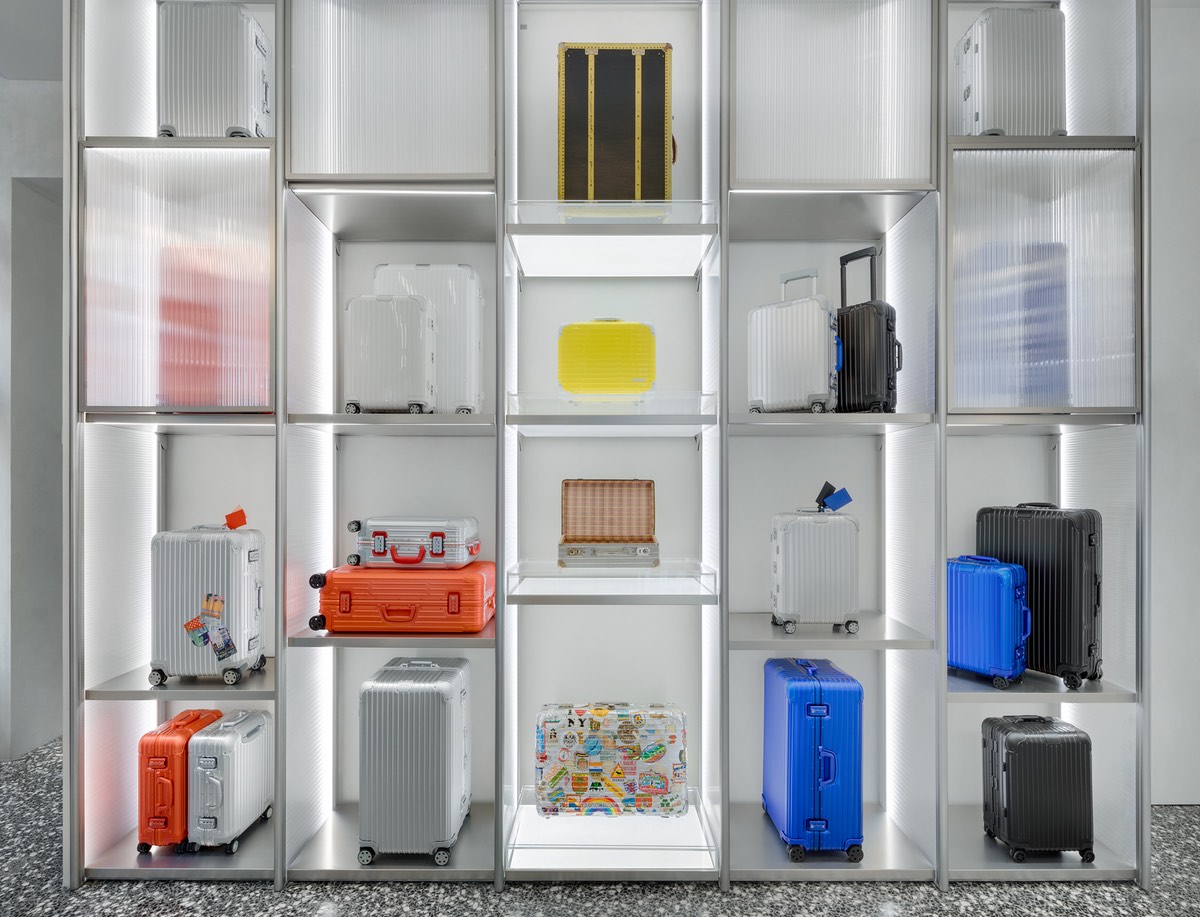 At Rimowa’s futuristic New York outpost, shelving built from aluminum and polycarbonate panels makes for a fun nod to the signature materials that constitute the German brand’s beloved trunks. 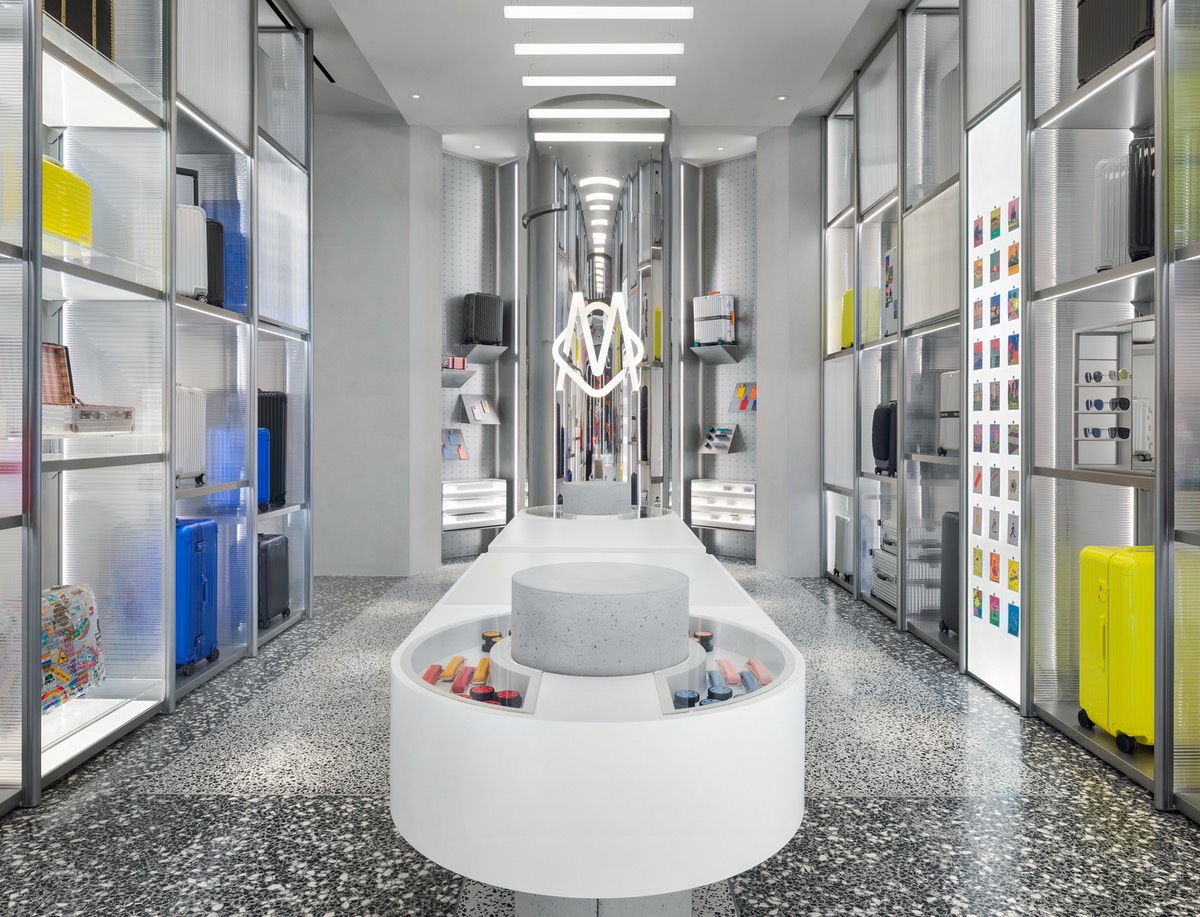 But if someone is shopping for a suitcase, it stands to reason that they might also need to update their passport. Hence the store’s main attraction: a passport photo booth tucked inside a mirrored column stationed at the heart of the store. 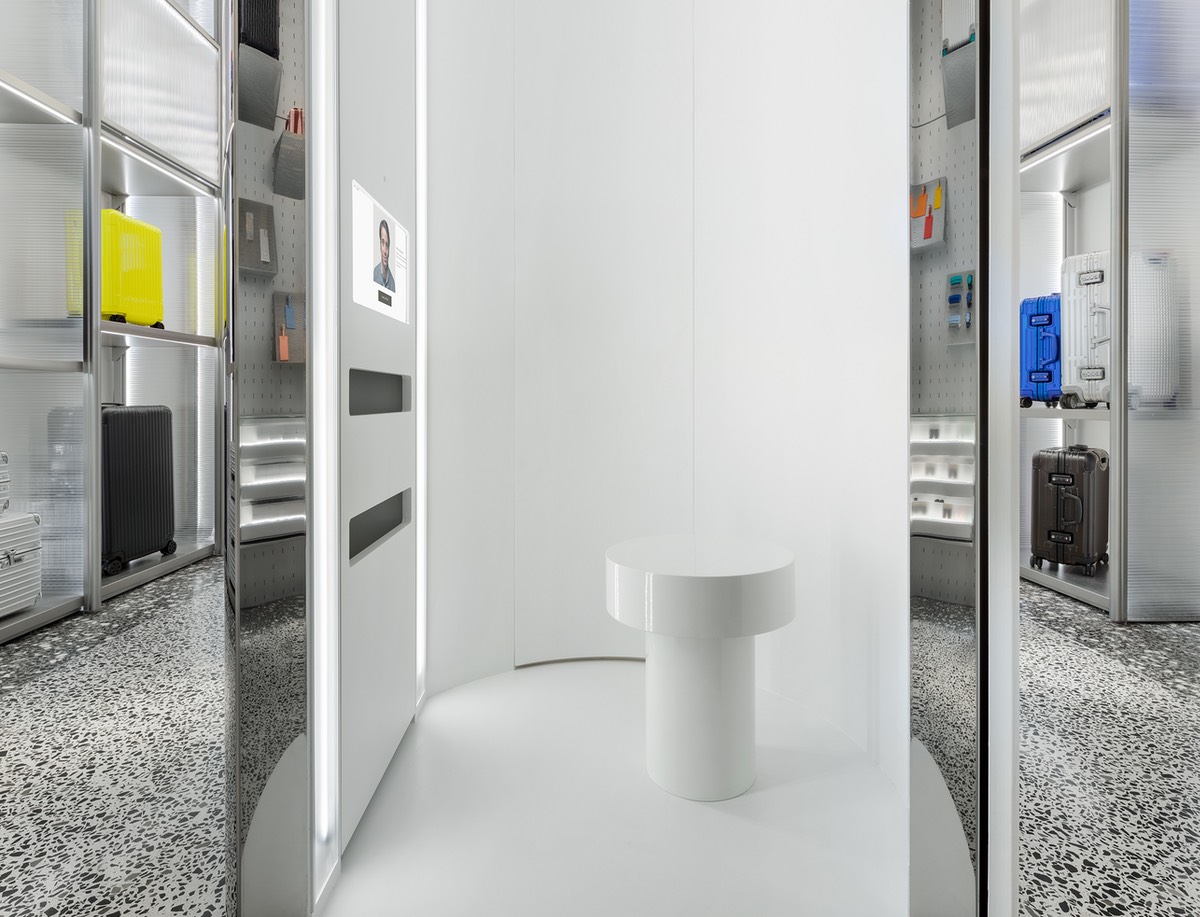 Designed with flattering lighting and easy-to-follow instructions, the complimentary self-service studio allows as many retakes as you need. Don’t have a trip booked? The booth also emails digital versions of your photos ready to post to social media. 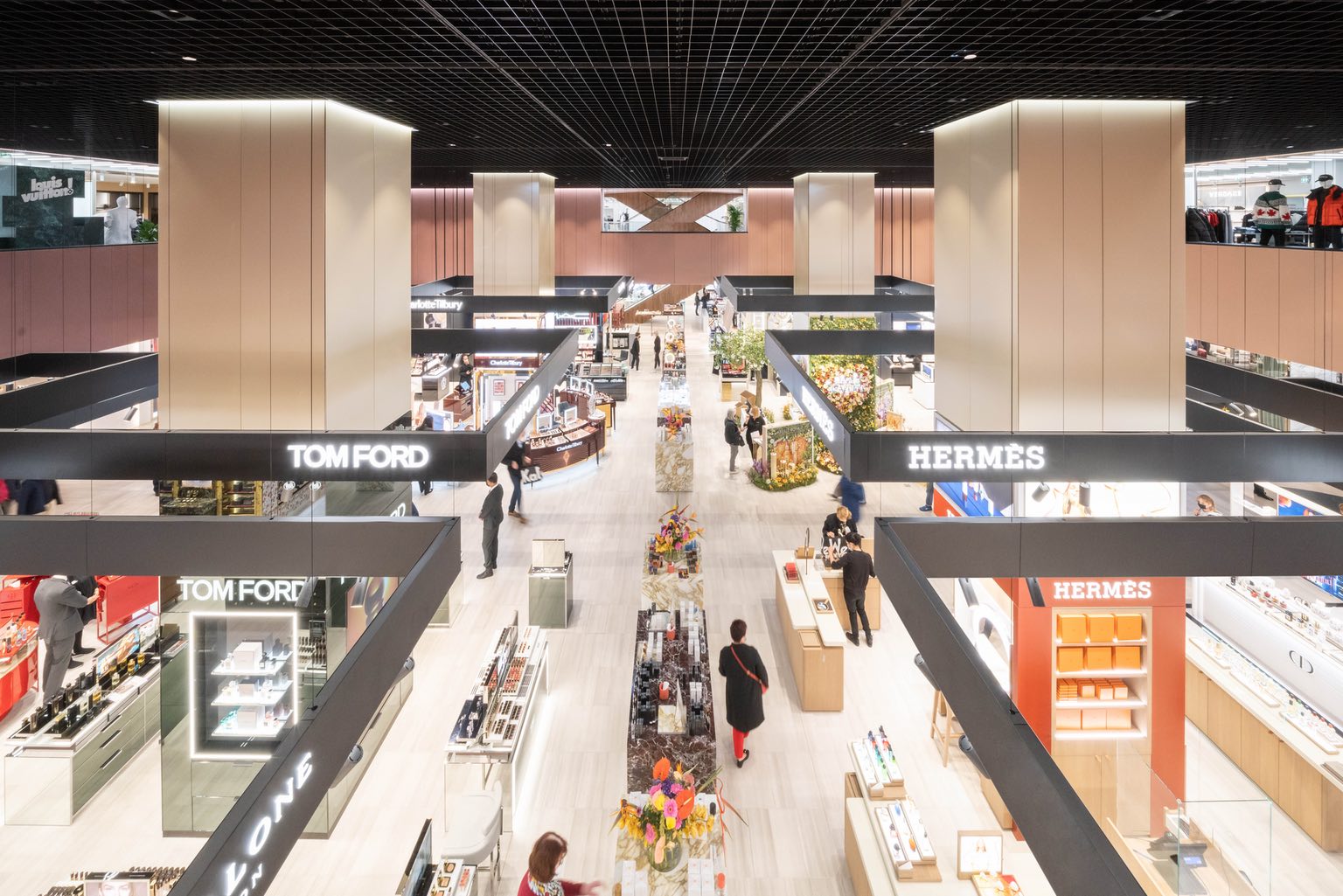 Formerly one-stop destinations for everything from clothing to appliances, department stores are in existential flux. When it comes to fashion, labels are now drawing customers to their own boutiques, which allow for richer reflections of their brands. And when it comes to everything else, online retailers like Amazon boast bigger and easier-to-browse selections. But the department store has a billion-dollar ace up its sleeve: real estate. By making strategic use of their large floor plates and landmark locations, urban department stores are playing up their roles as downtown destinations — and appealing to new audiences in the process. 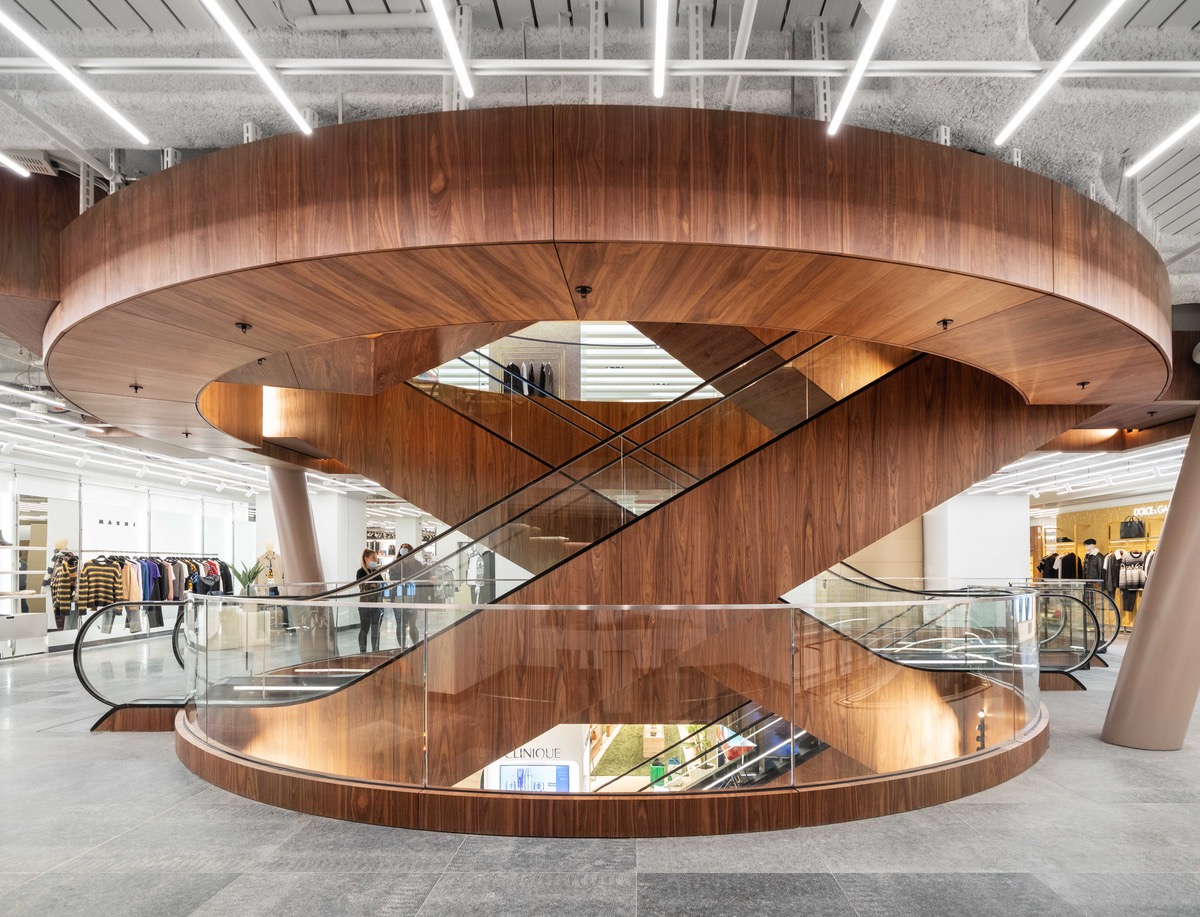 When OMA was tapped to revive Berlin’s historic Kaufhaus des Westens (KaDeWe), the designers focused their approach around a surprising centrepiece: the escalators. In the recently completed first phase of the 90,000-square-metre store’s redevelopment, moving staircases clad in warm timber introduce a sense of kinetic energy, making the shared experience of shopping a central part of its appeal. 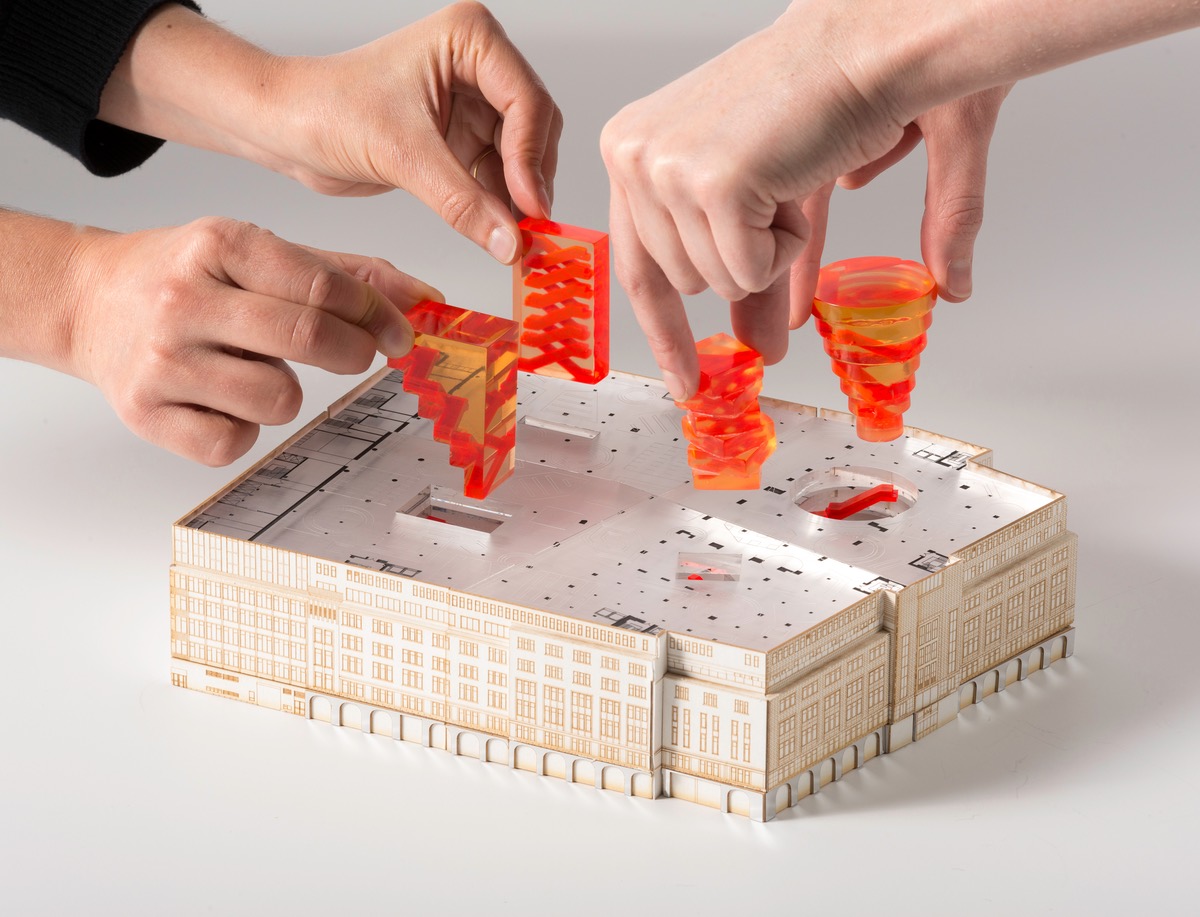 By the time the full project is complete, sculptural volumes will be carved into the building to introduce additional circulation elements. In the meantime, the hulking store has already been divided into four smaller quadrants, each with its own aesthetic motif. These four zones are further subdivided into a series of restaurants and mini-boutiques for individual retailers, evoking the fine-grained rhythm of an upscale high street. By encouraging a stronger sense of exploration and discovery, KaDeWe will become its own attraction — even for visitors with no specific purchase in mind. 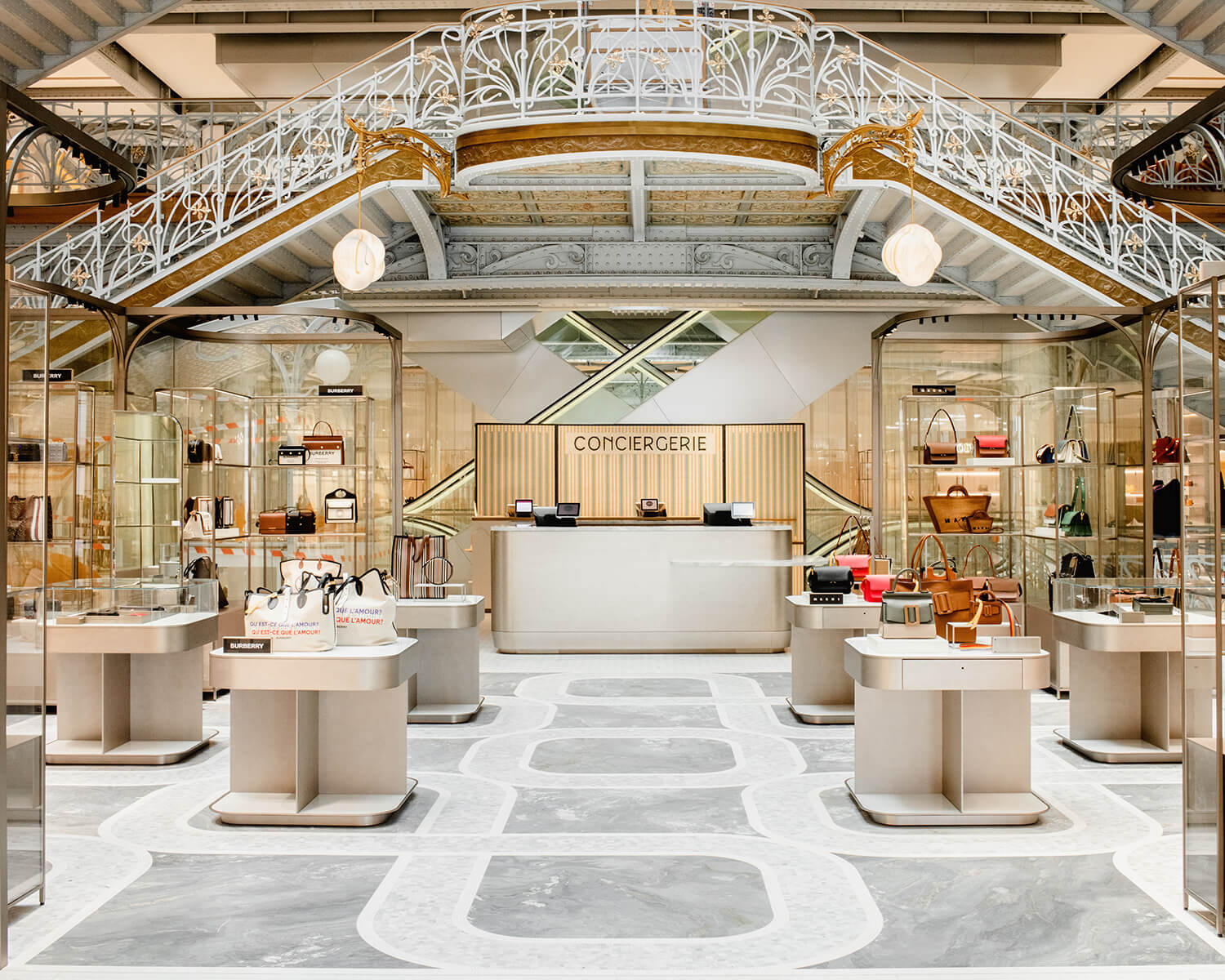 The Berlin experiment epitomizes a shopping typology in flux. In Paris, La Samaritaine is another example of a landmark department store reimagined as an experiential hub: Restored art nouveau architecture now takes pride of place behind a sleek new curtain wall by SANAA. Like KaDeWe, the project deftly updates old retail paradigms.

But the economic viability of many large urban department stores continues to erode, with America’s oldest department store brand, Lord & Taylor, one of the casualties. While the New York–based chain is now solely an e-commerce retailer, its remnant real estate is finding new value. 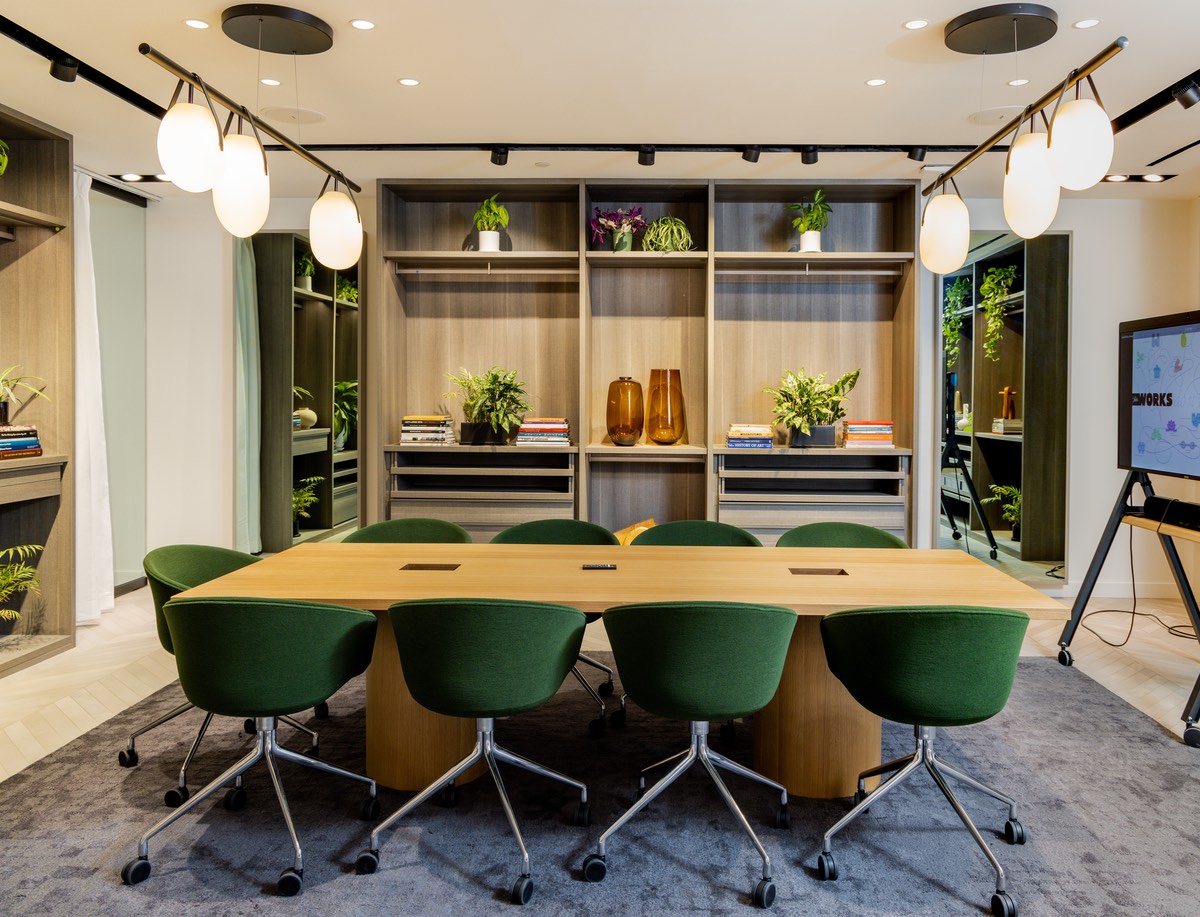 In New York and Connecticut, former urban and suburban stores have been converted into SaksWorks co-working spaces. (Hudson’s Bay owns both Saks and many of Lord & Taylor’s former buildings.) And at Manhattan’s Saks Fifth Avenue flagship, a part of the Saks store has also been adapted for co-working, introducing a mixed model of retail. Is it a model for the future? Time will tell. But whether or not this type of hybridization will take, one thing is already clear: In the 21st century, the department store is not just about selling products but about monetizing quality of space.

The retail industry is open for business — and designers and brands are rethinking the shopping experience from the ground up.