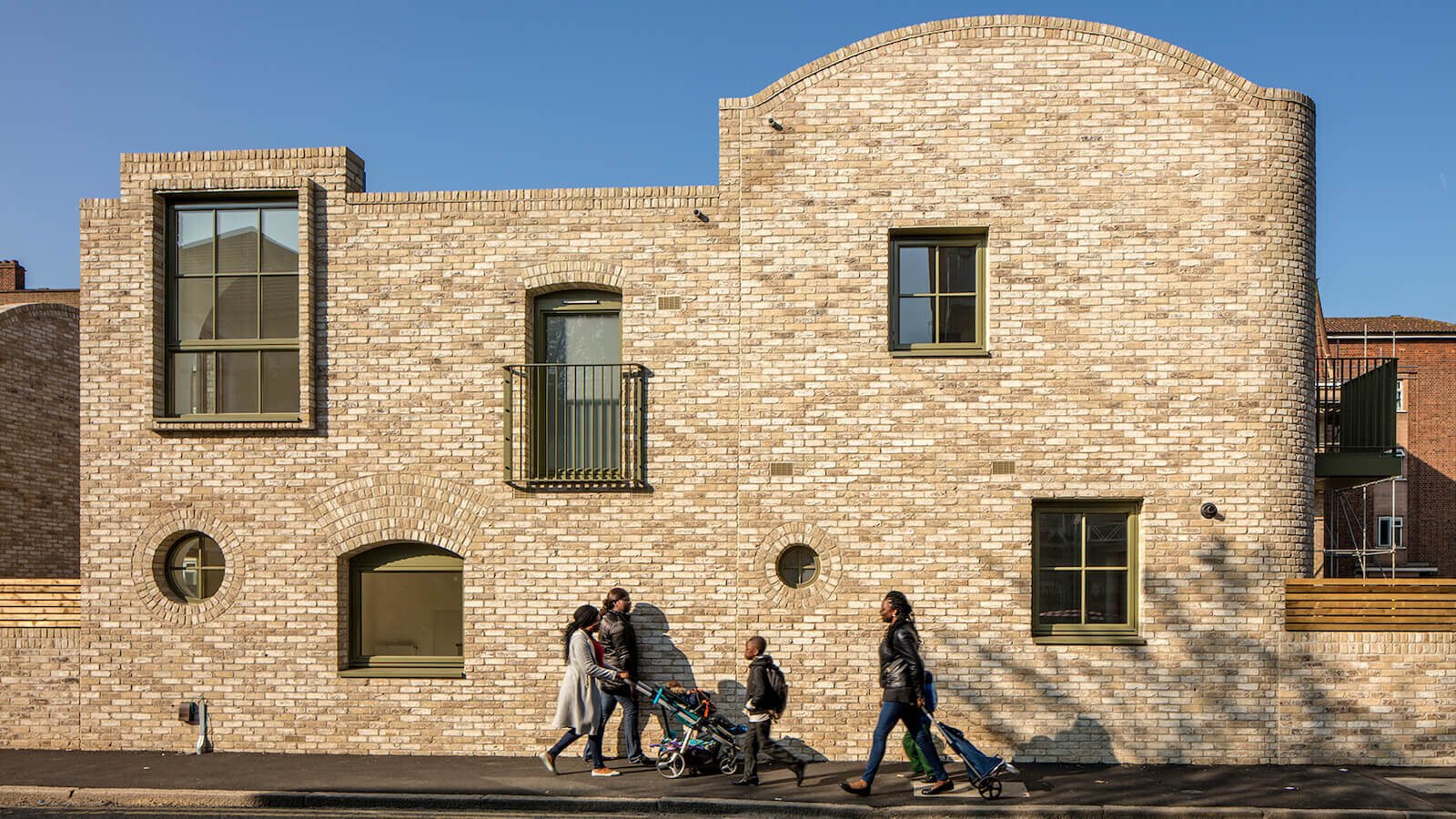 The London-based architect talks to AZURE about the challenges and opportunities of social housing design in an era of public austerity.

Around the bend from the eponymous railway hub, the metropolitan bustle of King’s Cross Road in London quickly gives way to a more intimate urban scene. Among the local cafés, hair salons, burger joints and tattoo parlours, a modest olive-green storefront displays a wealth of architectural models. Accented by arches and extrusions, the eclectic jumble of forms and volumes conjures a tableau of a city in miniature. Above the door, the sign reads “Peter Barber Architects.”

This six-person design studio is responsible for some of the U.K.’s most inventive new housing. Specializing in affordable and mixed-income homes that embrace dynamic street life, it boasts a portfolio of work distinguished by the ingenious use of constrained sites to create generous living spaces and — hopefully — foster sociable communities. 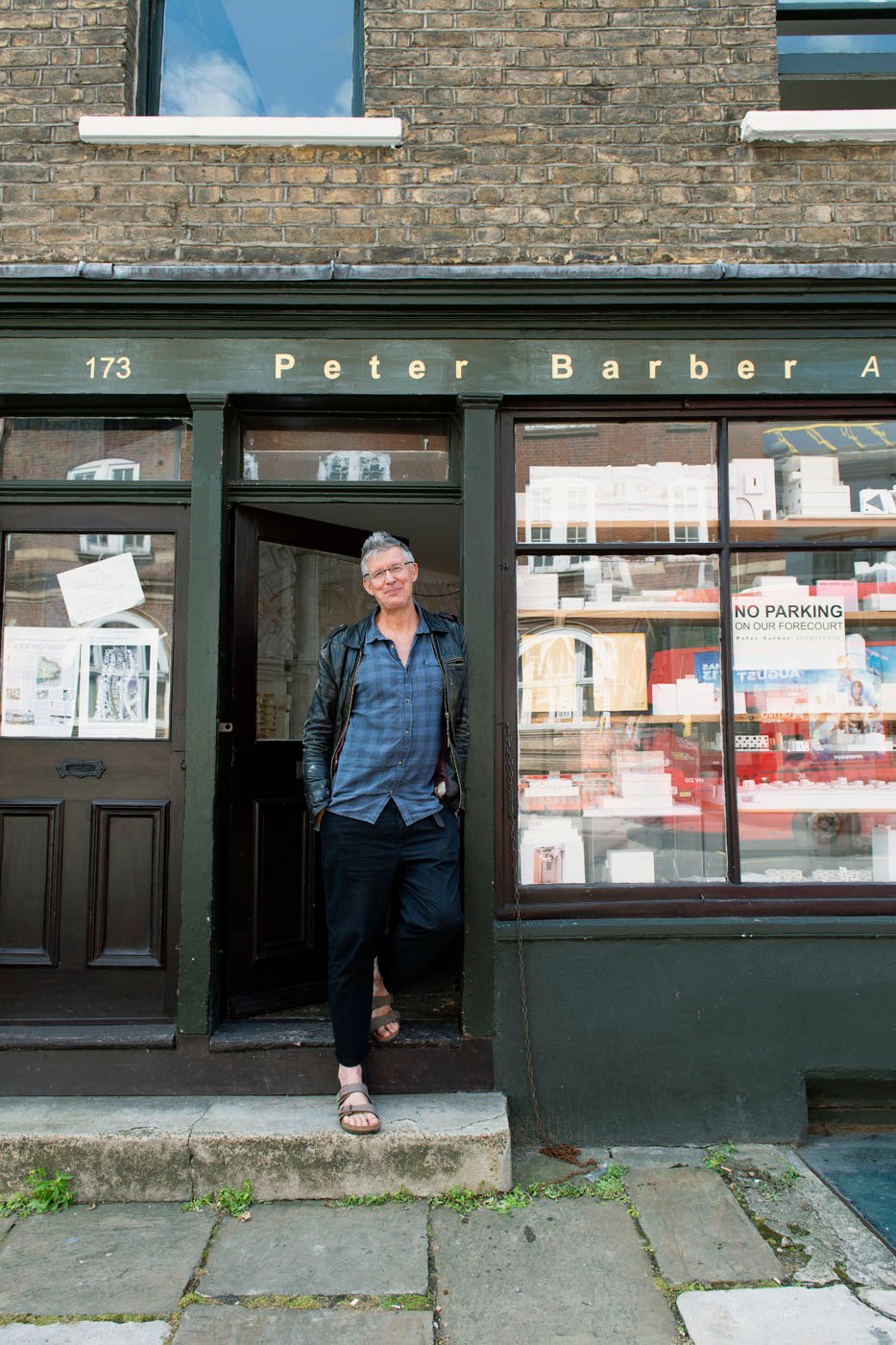 Peter Barber in front of his studio on King’s Cross Road, with architectural models displayed in the window. PHOTO: Kristina Sälgvik

And the world is taking notice. In 2021, London’s publicly funded and operated McGrath Road complex was recognized with RIBA’s prestigious Neave Brown Award for Housing, which celebrates the best new affordable residential projects in the U.K. (Another Barber-designed London complex, 95 Peckham Road, made the shortlist.) In our conversation, founder and principal Peter Barber reflects on the political and spatial realities of designing affordable urban housing in an era of commodification and public austerity.

Many of your projects transform compact, seemingly awkward sites. At London’s North Street, for example, you’ve designed a row of new council homes on a median between two roads — land thought to be undevelopable. What drives affordable housing into such unconventional sites?

It’s very difficult for us here in the U.K., and it has been since about 1977, when public policy shifted toward encouraging private home ownership — and council housing began being sold off to get people on the property ladder. It’s a contrast to the postwar era and the 1960s and ’70s, when central governments in the U.K. and around the world had their hearts in building social housing. And not just their hearts — they were putting a lot of money and effort into it. But for almost the whole of my career, there was basically no social housing being built. 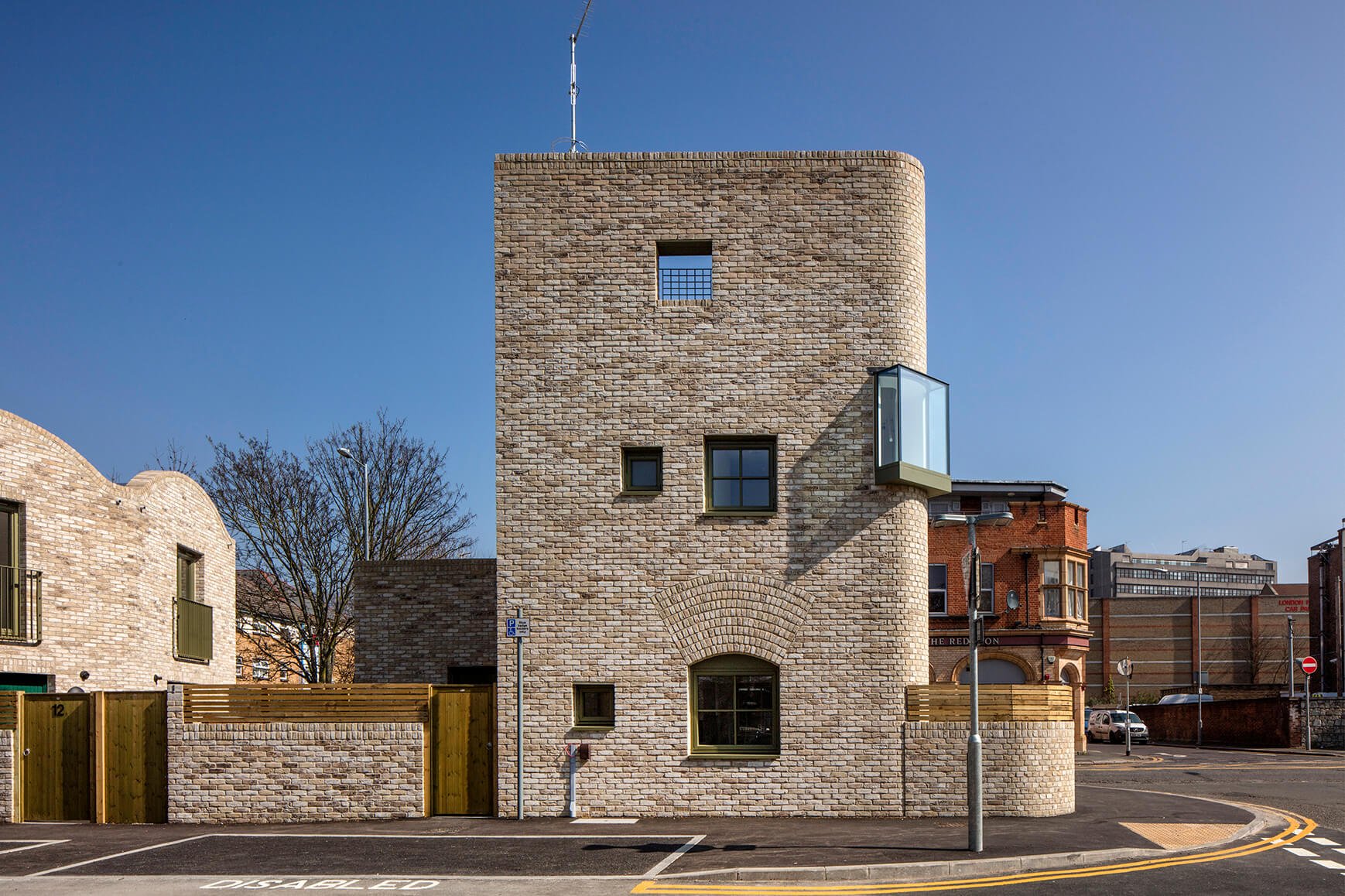 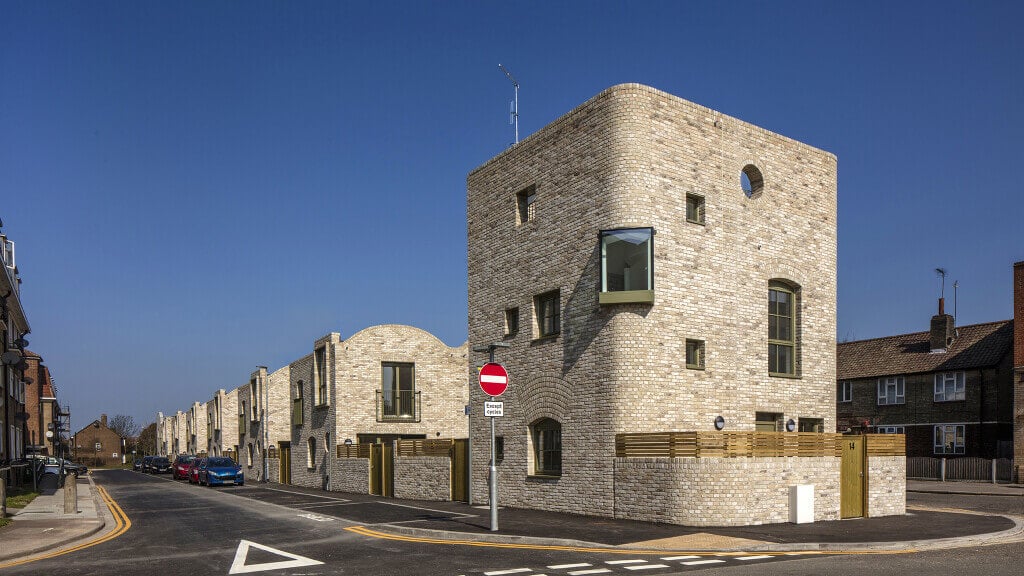 Careful articulation ensures a sense of privacy in an exposed urban setting, with a private garden for each home. 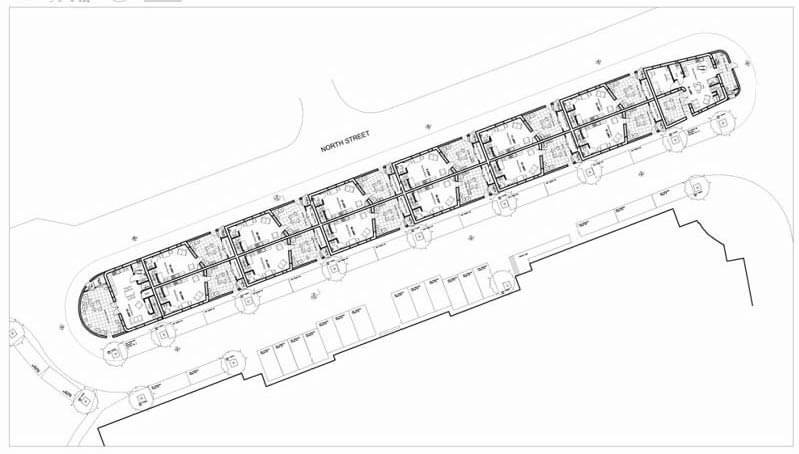 Today, prominent, centrally located urban land is quickly sold off to private developers. We did a concept design for a large publicly owned site near our office — and then it was bought. It could’ve been a wonderful project, but it never had any real possibility of being built. So the social housing we manage to do often ends up being a bit under-the-radar. It requires almost guerrilla tactics to pull off: We’re working with snippets of land next to railway lines, or bits and scraps that have been used for storage or garage space.

How can you create livable homes and good public spaces in these types of conditions?

It starts with the idea of embracing the street. Very often, big residential buildings have an awful lot of empty space around them, and the standard apartment building also uses about a quarter of its internal floor area for circulation. If you can turn that same structure on its side and lay it flat — creating public streets in lieu of private corridors — there’s a social benefit to the neighbourhood.

It also allows for high densities: Very often, our four- or five-storey buildings are an efficient alternative to a project which may have been seven or eight storeys instead. That’s achieved by pushing the buildings down and getting high site coverage. So you end up with these tight little mews and inner streets, which are actually the sorts of spaces that people really like. 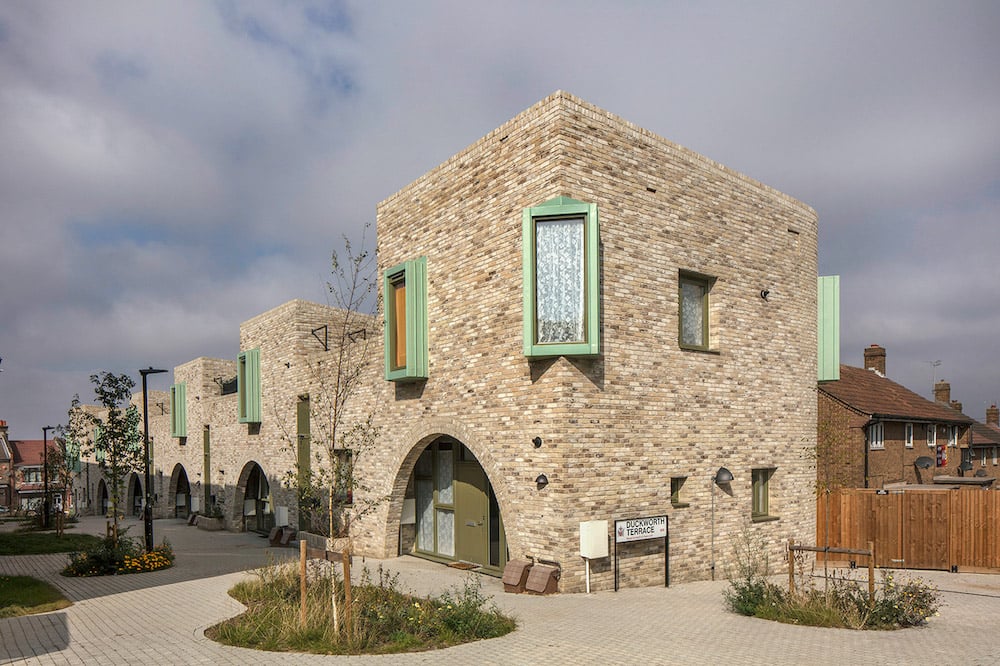 At Bevan Road, a shared outdoor space with seating and greenery doubles as circulation through the site, creating a public venue for residents.

Mustard-yellow bricks (real ones) and ground-floor arches are also motifs in many of your projects. What kind of ambience do these gestures create?

Brick ages well, and I suppose it’s also a classic “London” material, and we still have great bricklayers in the U.K., so it’s part of that tradition. That said, bricks aren’t particularly ecological, and I’m increasingly questioning whether it’s the right material to be using.

The arches are a way of creating space at the front of the house — it’s somewhere to sit, put pots and plants, push a few chairs together and that type of thing. At McGrath Road, for example, the arches are quite deep to allow residents to shape the front of their homes. It’s nice to make a fuss about a building’s entrance.

“It requires almost guerrilla tactics to pull off: We’re working with snippets of land next to railway lines, or bits and scraps that have been used for storage or garage space.”
Peter Barber, Architect 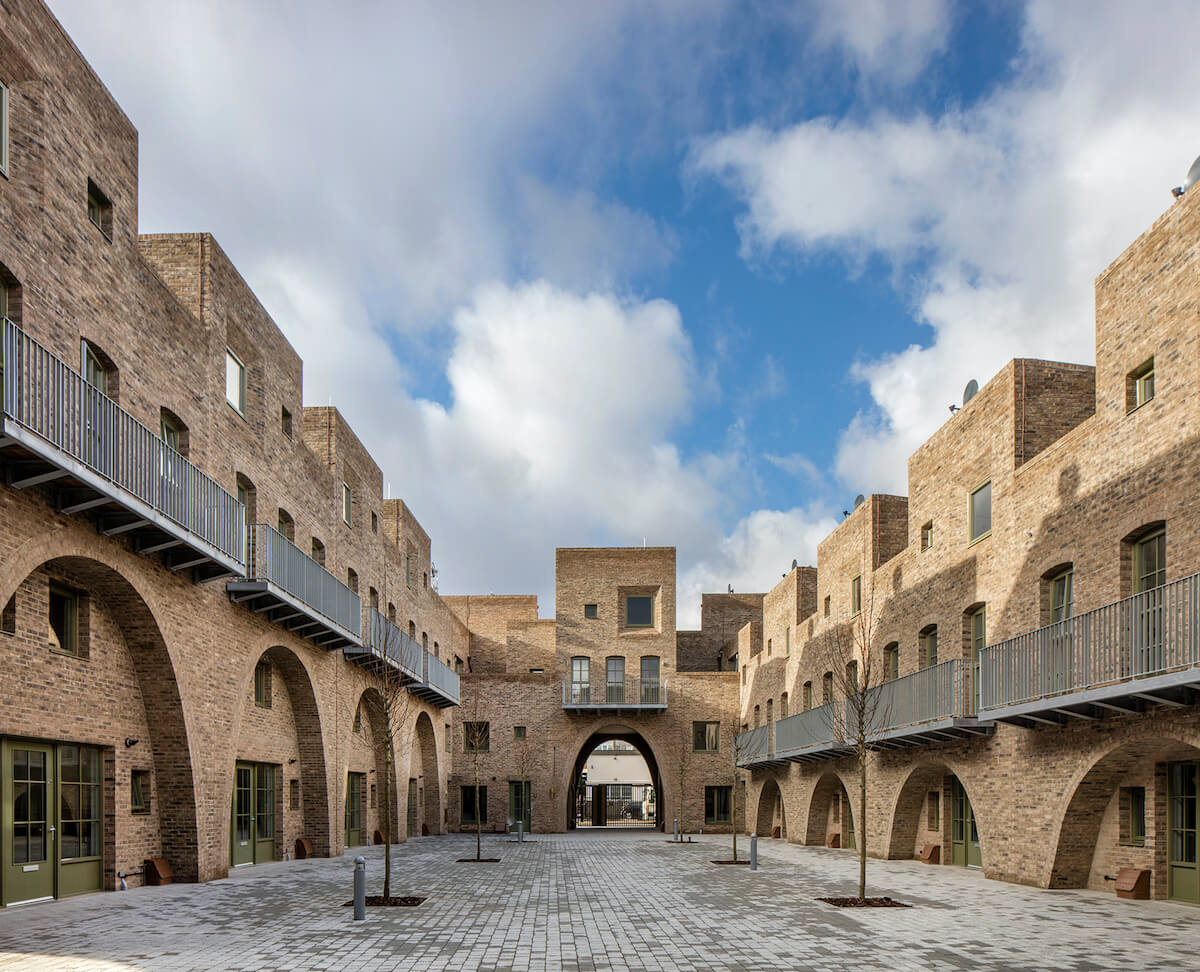 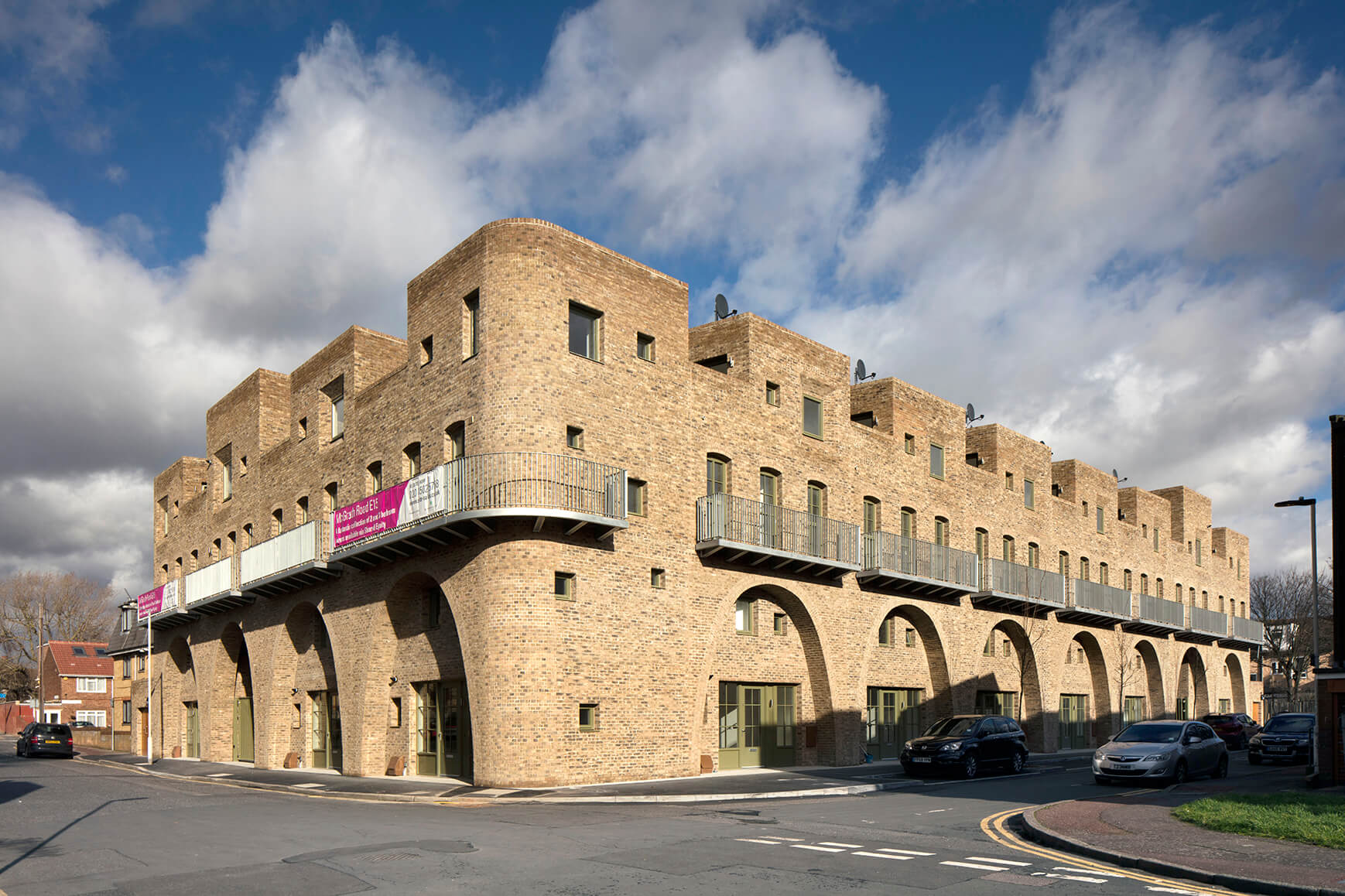 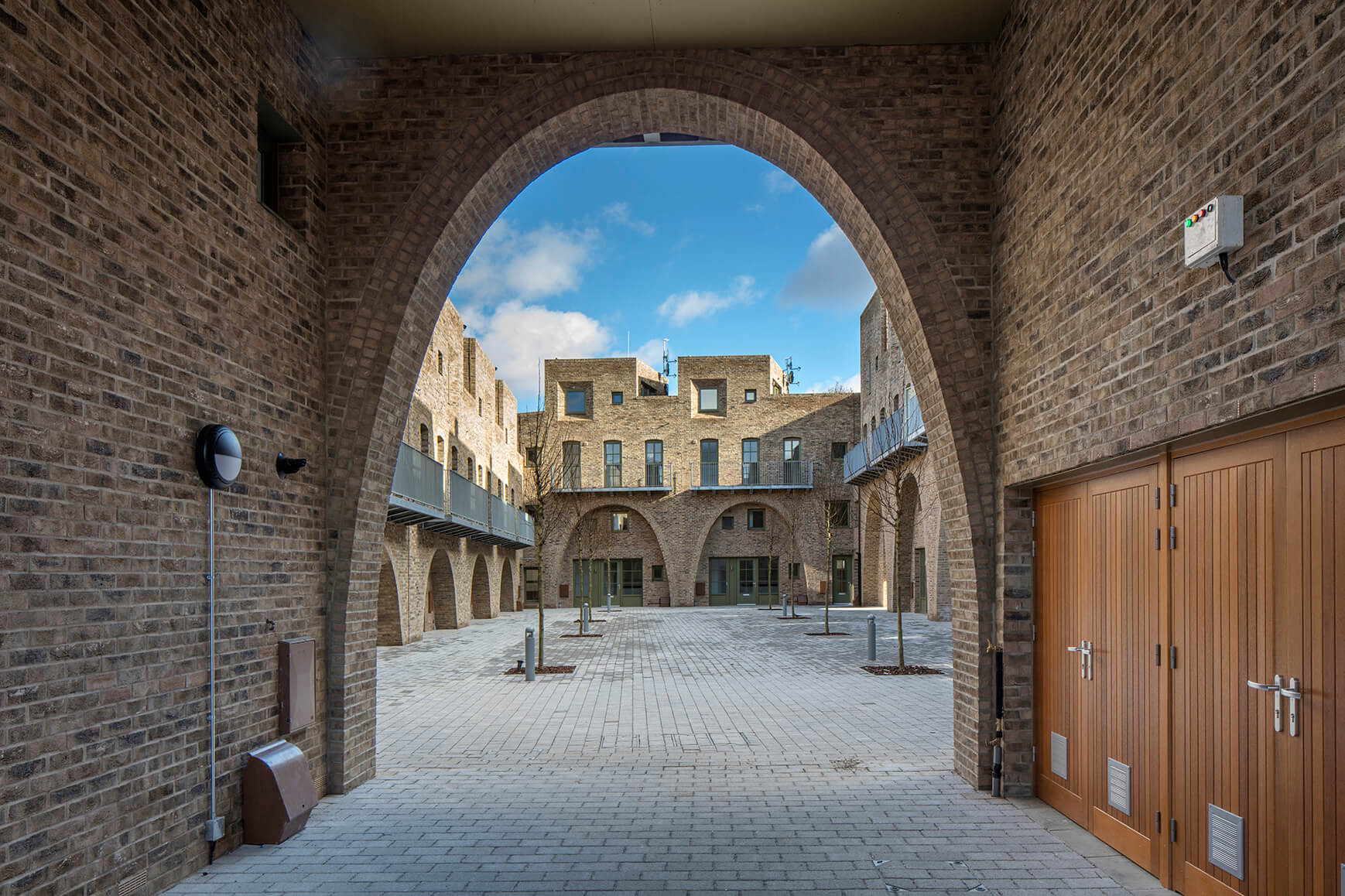 There’s also a lot of variety above the street level — even for taller buildings like 95 Peckham Road, where each residence feels individually sculpted. Why break up the facades?

Although they aren’t really houses, a lot of our projects look a bit like houses, with a sense of individuality expressed in the articulation. Our stuff can also look a bit strange, and the typologies are rather unusual. We don’t do that for its own sake — we do that because we try to deal with the difficult constraints in these sites, create a variety of living spaces, and achieve a balance between enclosure and openness. You don’t want to be looking into people’s gardens from the street, so the windows are often twisted round, trying to make the massing work to preserve a sense of privacy.

But the hope is that, as people start to use these spaces and the buildings come to life, the architecture becomes the background and people’s lives become the foreground. 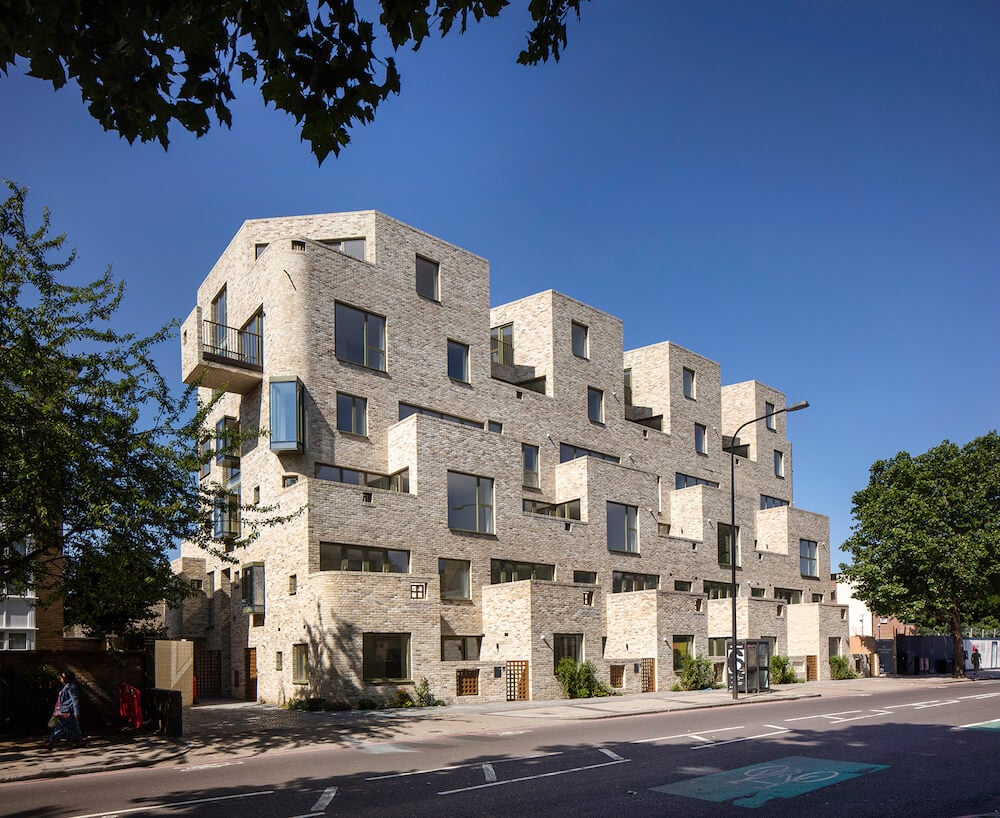 One of Barber’s taller projects, the 33-unit 95 Peckham Road recreates the visual rhythm of row houses through its articulation. 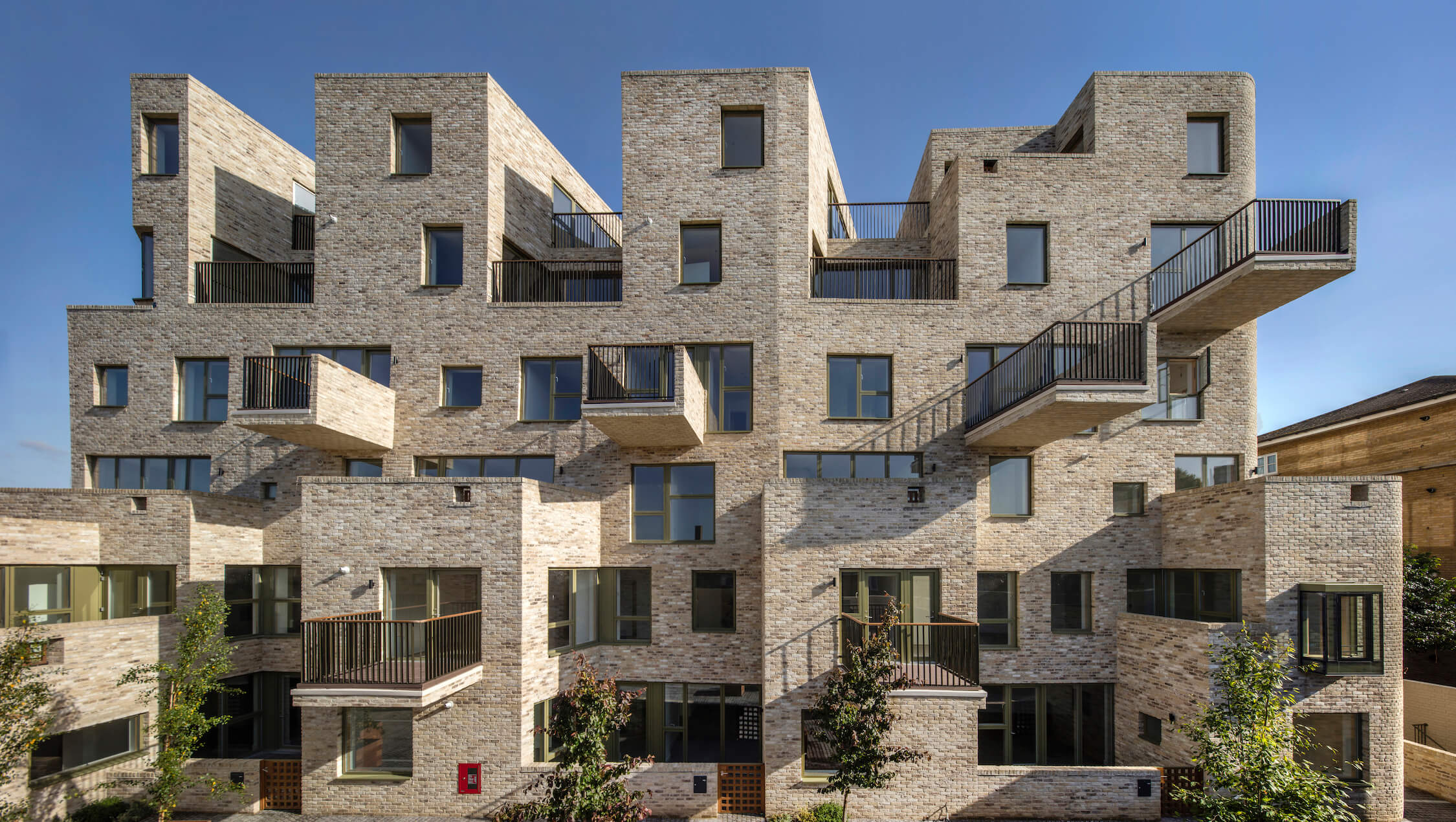 Each home appears individually carved out from the central volume, with deep balconies adding outdoor space and a sense of visual drama. 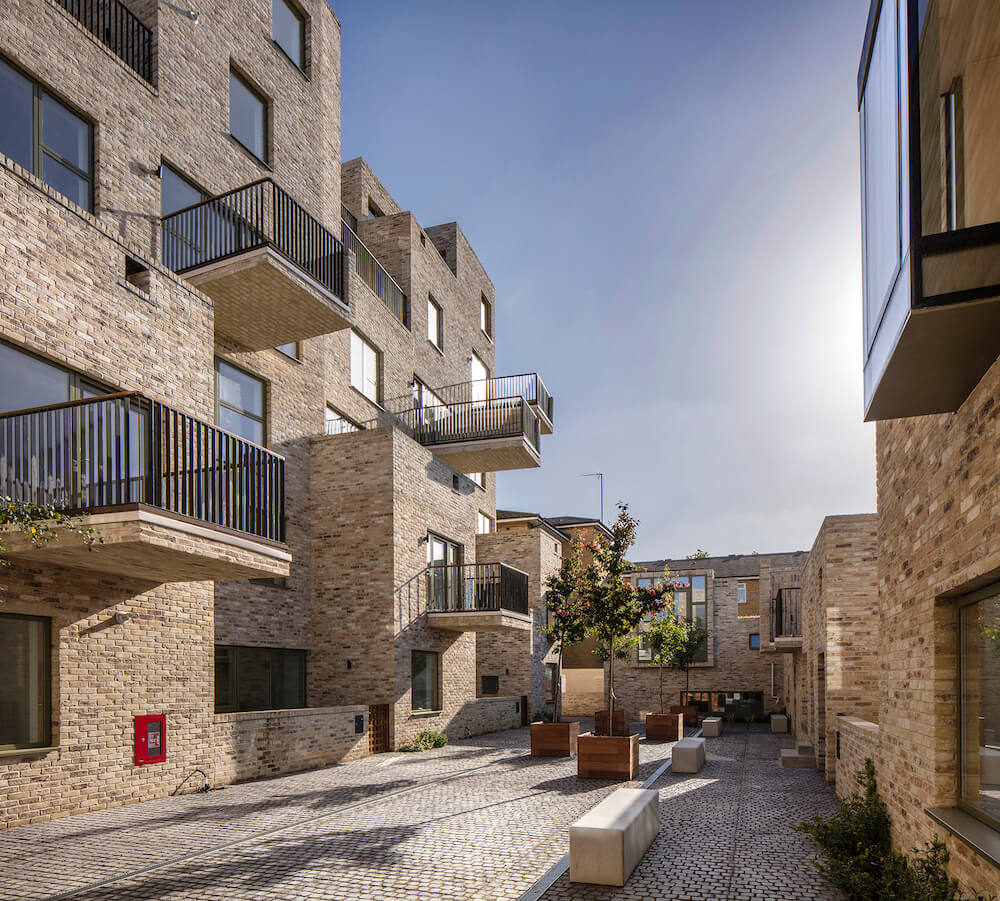 95 Peckham’s narrow inner courtyard is a gathering space for residents. 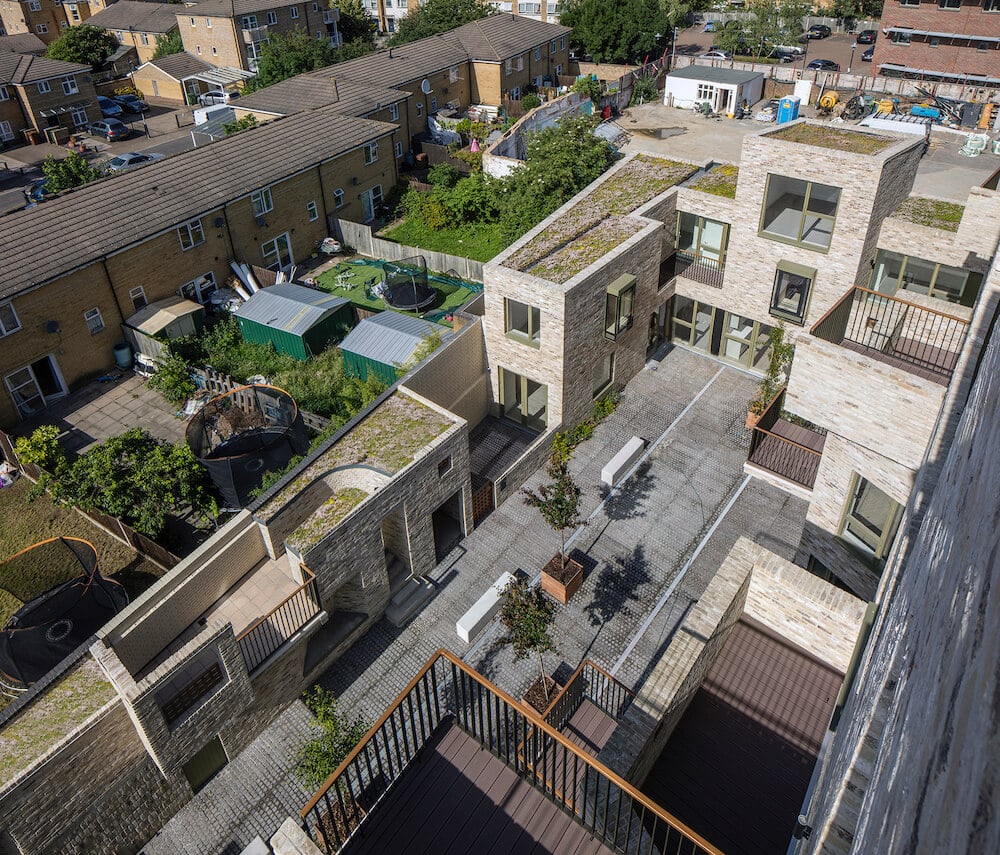 The complex transitions to a lower scale to frame the courtyard, creating a variety of dwelling types and meeting the scale of its surroundings.

What do you learn from returning to a building once people have moved in?

It’s important to realize that one’s power is limited. Although there really are magical things that architects can do, we can’t make anybody do anything. And there isn’t a causal relationship between space and people’s behaviour. Space can influence us, but in the end, it’s people that make things happen. 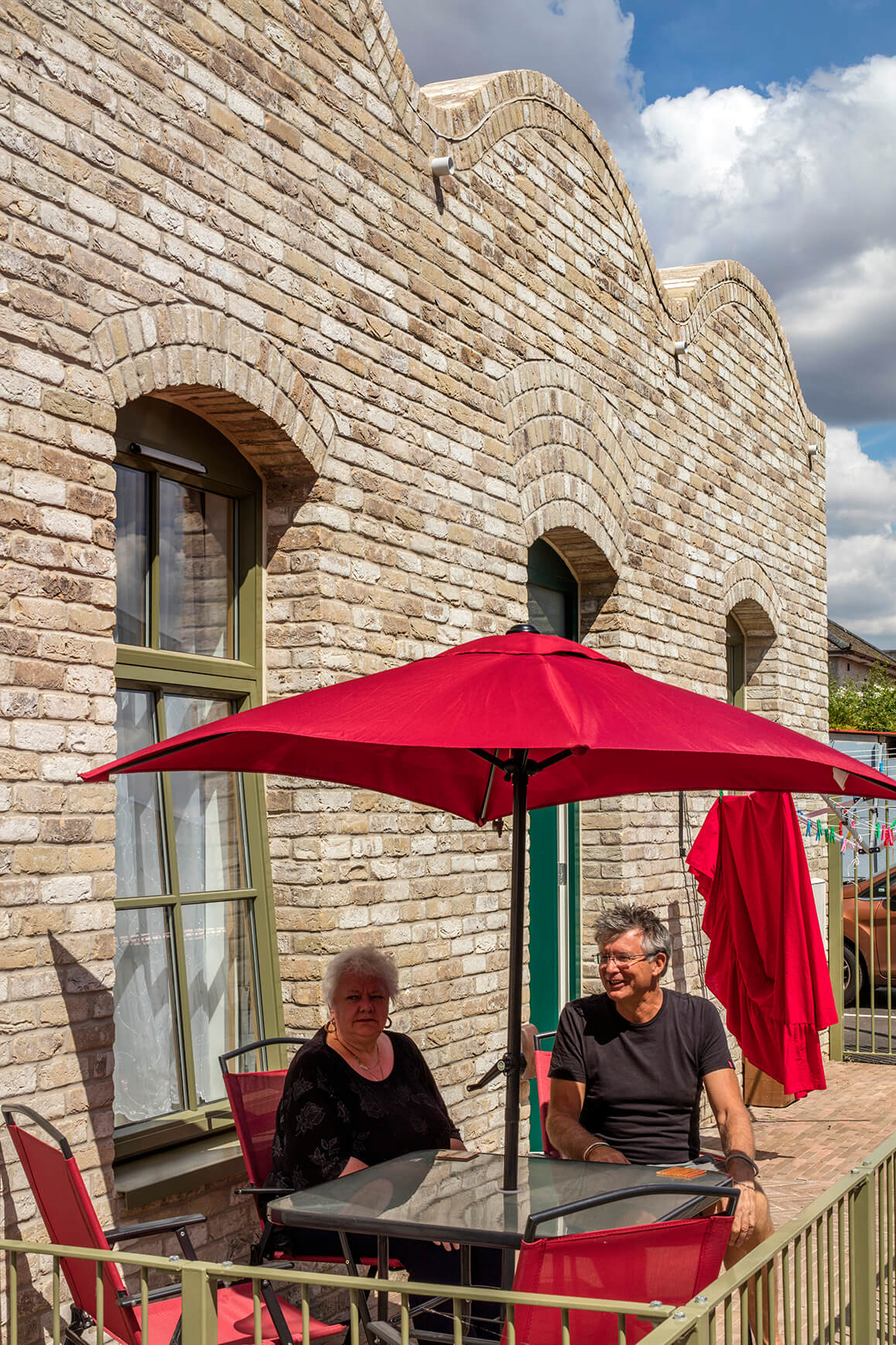 Peter enjoys a chat with a resident of London’s Ilchester Road, a complex design for older residents looking to downsize their homes. 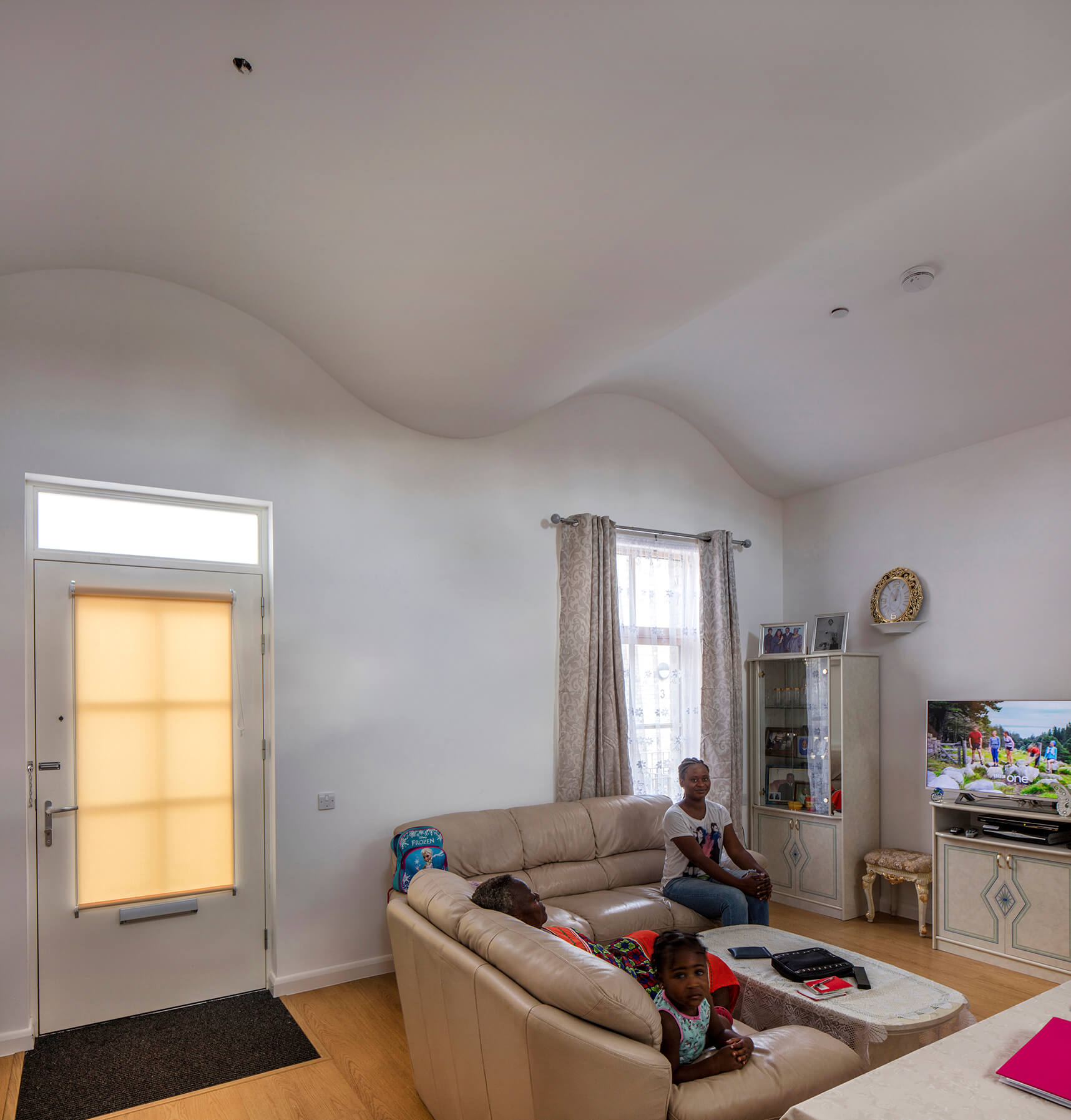 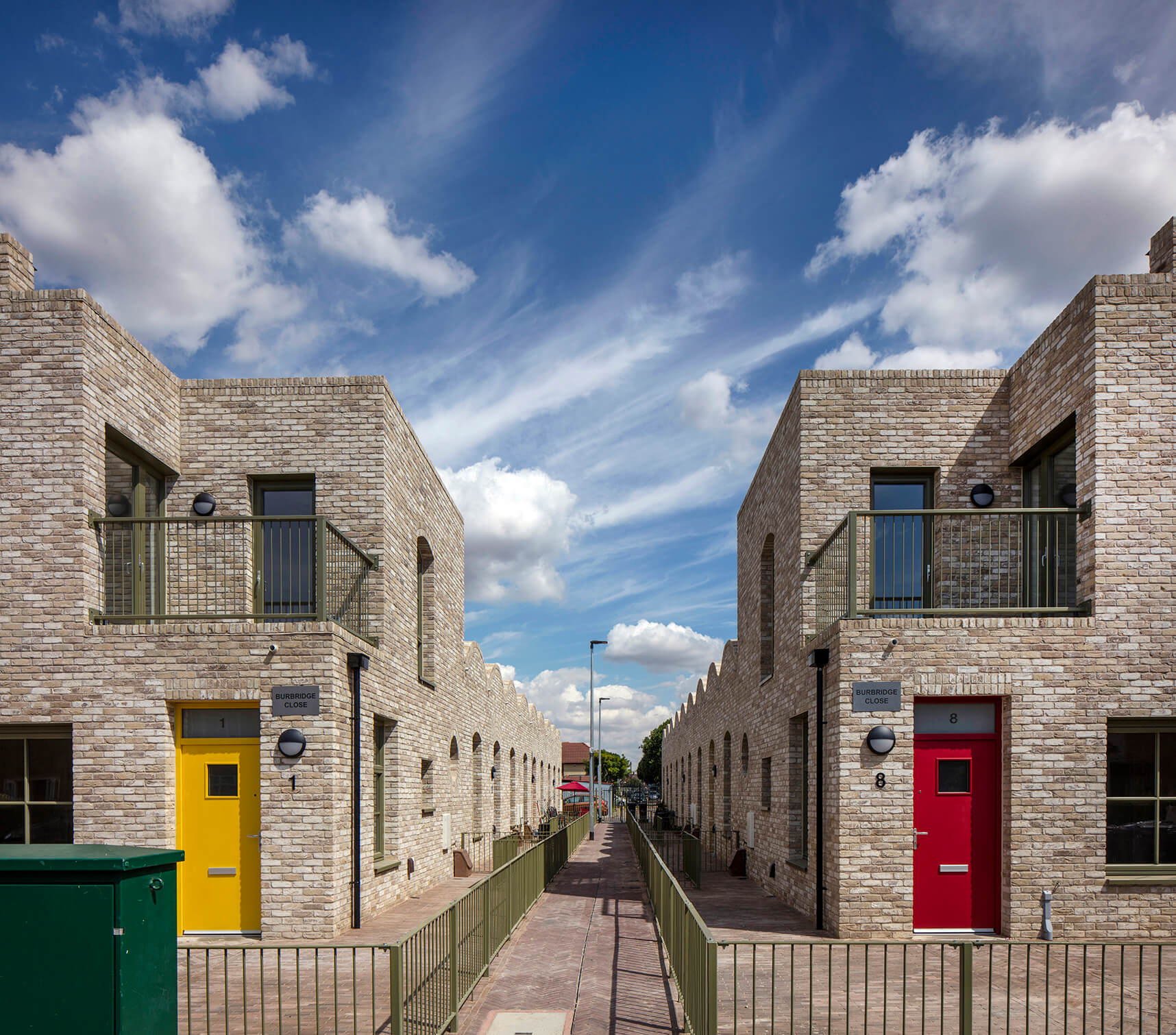 I’m very suspicious when developers talk about building a community or building a neighbourhood: I don’t believe that’s possible. You can create the conditions where these things can happen, and you can also create the conditions where they can’t happen or they’re unlikely to happen. That’s it. But the real magic is when you go back and people are starting to take control of the situation.

It’s vital for architects to accept the limits of what design can do. At the same time, however, the chronic lack of public funding for housing across the United Kingdom and North America limits the profession’s public presence and influence. In turn, this political and economic reality ushered in a new architectural canon dominated by the spectacle of “Bilbao effect” projects. How can we bring housing back from the margins? 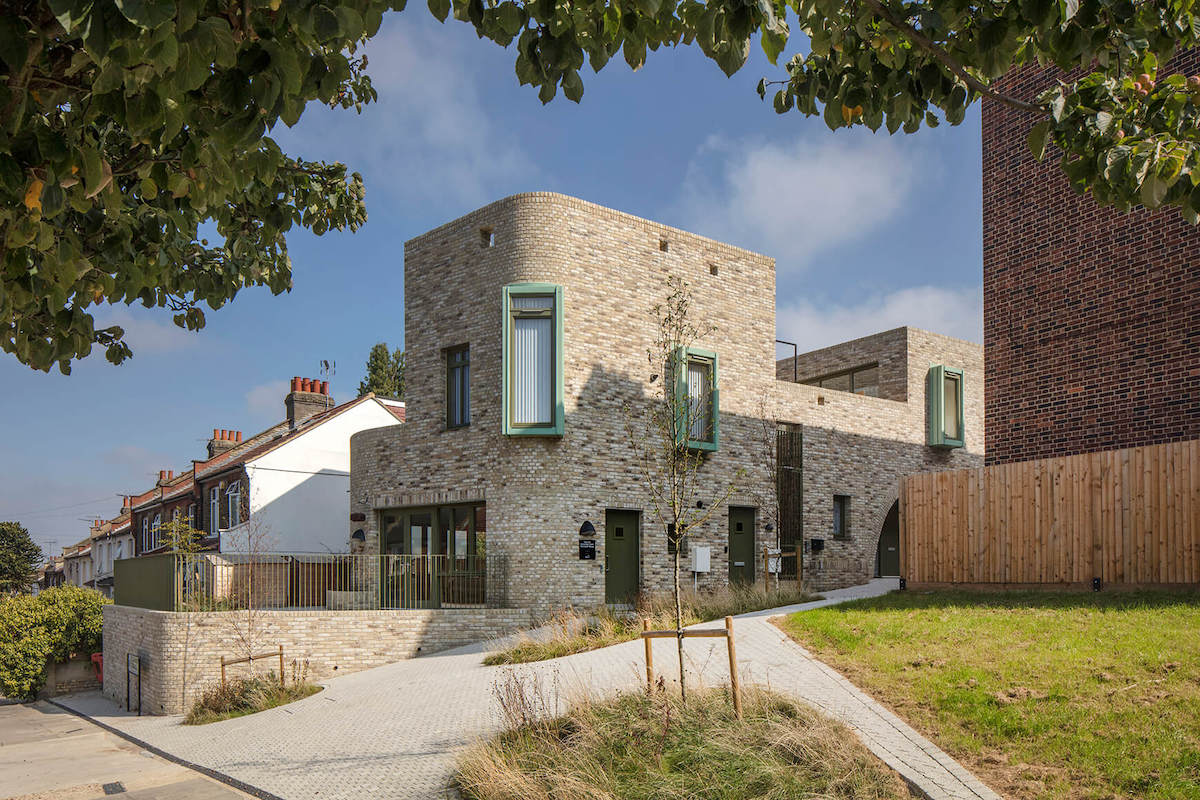 Like many of Barber’s projects, Bevan Road is tucked into a narrow, enclosed site that lacked obvious appeal for market-rate development.

For most of my career, it wasn’t really part of architectural culture. Here in the U.K., the focus (and the funding) was very much on the so-called “millennium projects” — high-profile museums and cultural spaces. Aside from a few luxurious private residences, housing wasn’t leading the conversation. Again, that’s a stark departure from the ’60s and ’70s, when the best London graduates would go to work for the local public council authorities — because that’s where really exciting things were happening.

In Vienna, it’s still the case. While so many other places abandoned their social housing programs and sold the buildings in the 1970s, Vienna carried on. Perhaps there’s a stigma attached to it in our culture, but in that city, it’s what everybody wants. You get road sweepers and lawyers and people living alongside one another in social housing because it’s the best and cheapest housing. They’re very, very proud of it and they’ve carried on building it to this day. 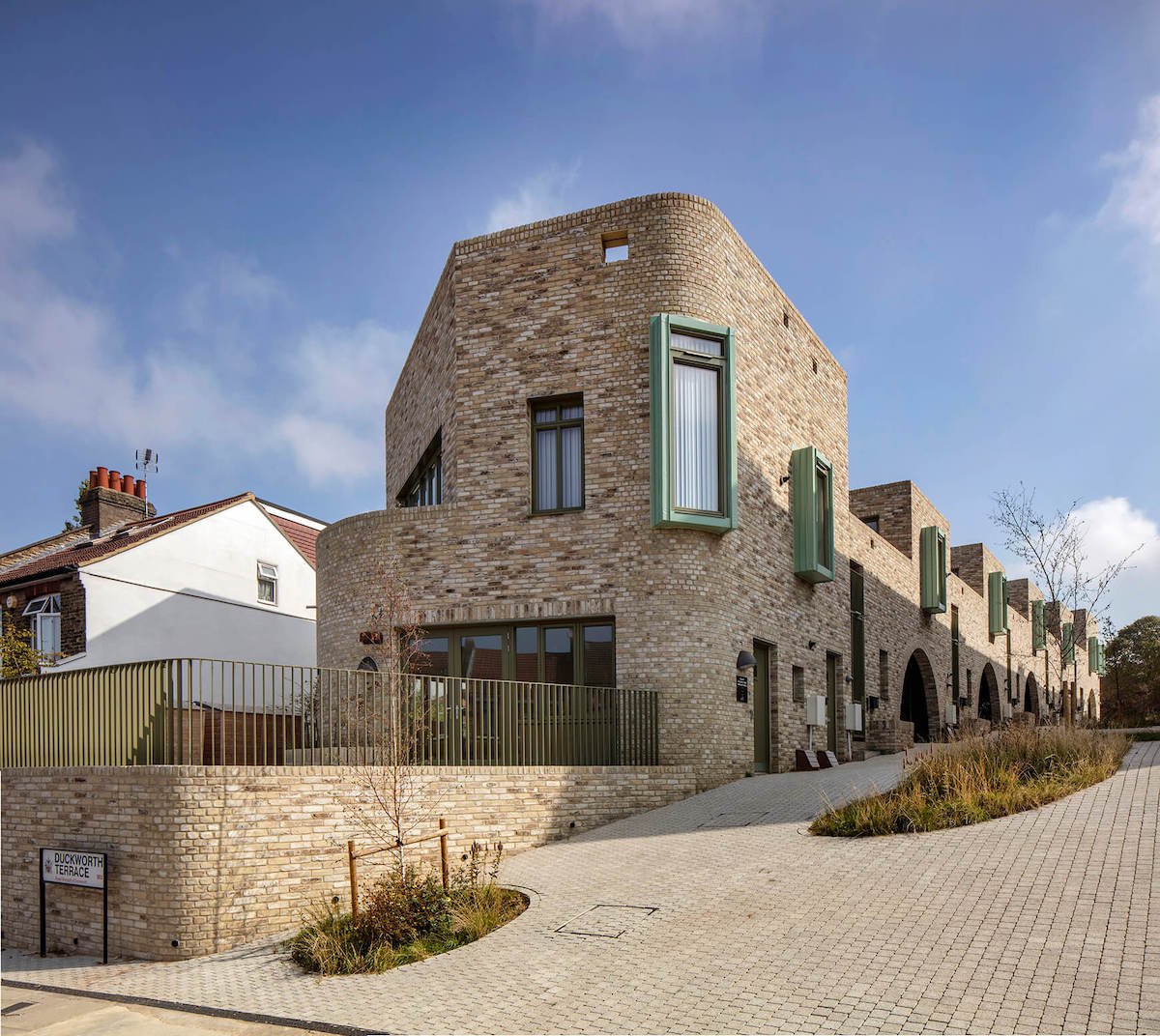 On a more immediate level, you foster a public presence with an office in a storefront. How does your own office fit into the community? Do people come up and engage with it from the street?

Absolutely. There’s a lot of social housing here, a lot of homelessness, lots of tourists passing through, and there are residential buildings — it’s a diverse combination. It’s a very interesting neighbourhood from that point of view, and a wonderful mix of races and economic groups and ages. We get people looking in through the window or even walking inside. I think the possibility of seeing what’s going on is exciting.

Sometimes it’s parents with children peering in through the window, sometimes it’s a homeless person saying, “I wish I had the opportunity to be an architect. I liked drawing at school.” We go down and talk to people. And although we don’t pick up a great deal of work that way, we have gotten one or two jobs from people knocking on the door.

The London-based architect talks to AZURE about the challenges and opportunities of social housing design in an era of public austerity.