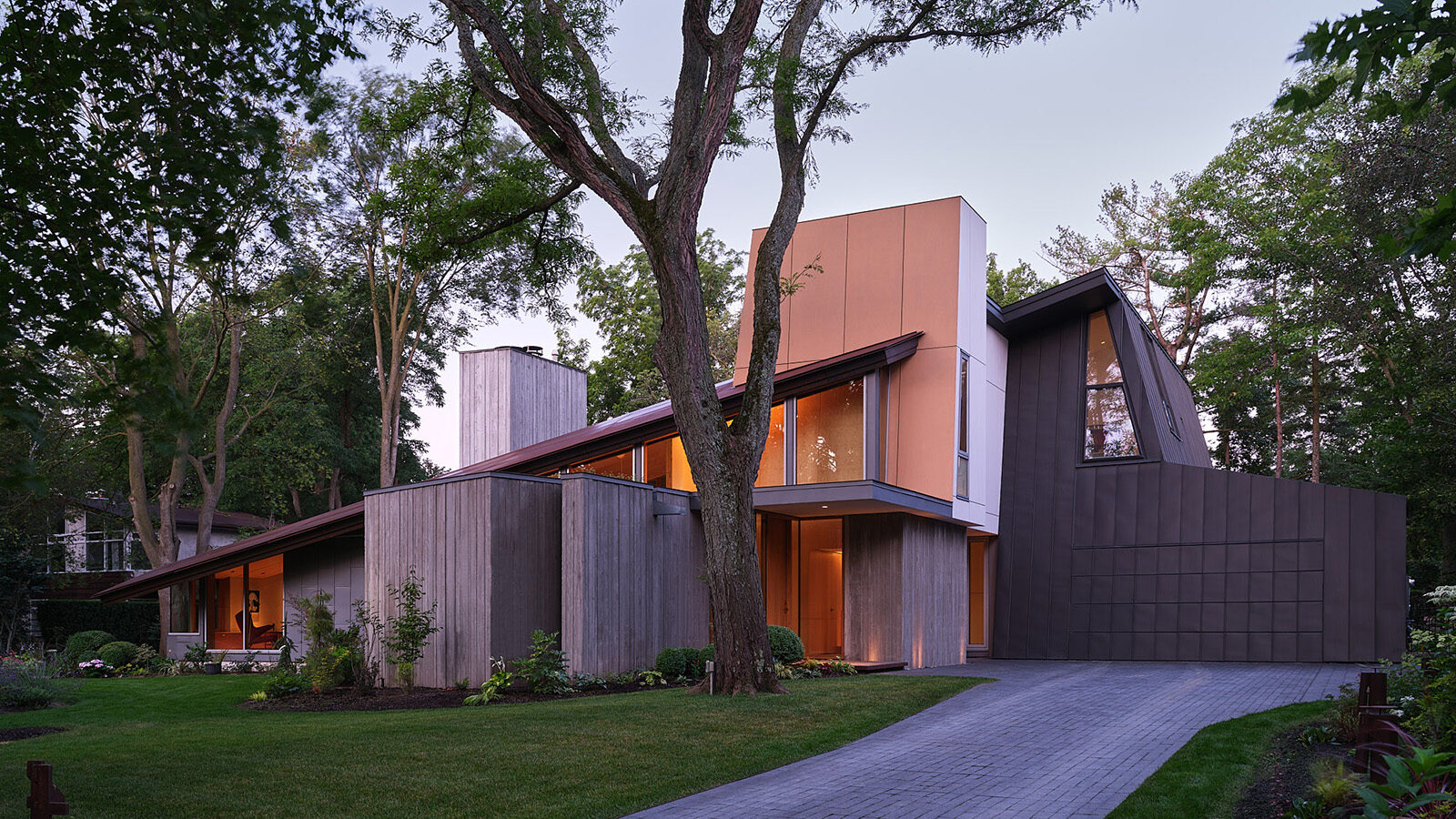 In 2014, Toronto architects Adam Thom and Katja Aga Sachse Thom — life partners and co-founders of the firm Agathom — received a commission for a bespoke home in Thornhill, an upscale neighbourhood north of the city. The clients, a retired couple, were clear about what they did and didn’t want. “They said, ‘We don’t have a cottage. We will never have a cottage. But we would like to build a kind of cottage in the city,’ ” Adam recalls. They envisioned a sophisticated abode, though, not a rustic one. “They weren’t picturing a stony, goofy fireplace,” says Adam, “or a wall with a deer head on it.” 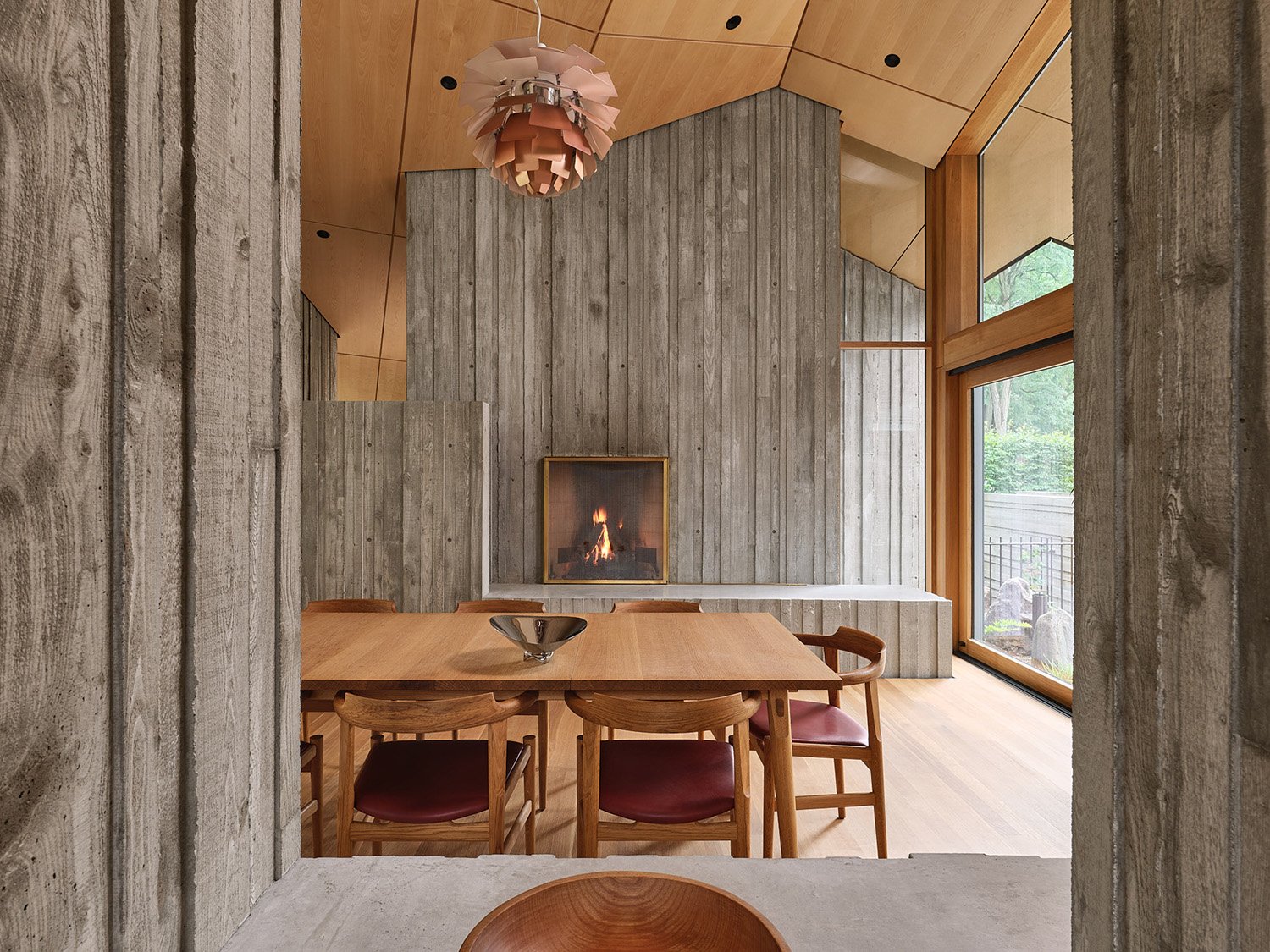 Plenty of wood went into the home, named Dove House, from the white oak floors to the white birch cladding on the walls and cabinetry to the structural concrete formed with rough-sawn planks — the kind that leave knots and gnarls and grain lines in the material. But the woodsy themes are also metaphorical. “You move through the space and experience a journey through a landscape,” says Adam. “It’s like a walk in the woods. You go over rocks and logs. The canopies are ever-changing. Light comes through from unexpected places.” 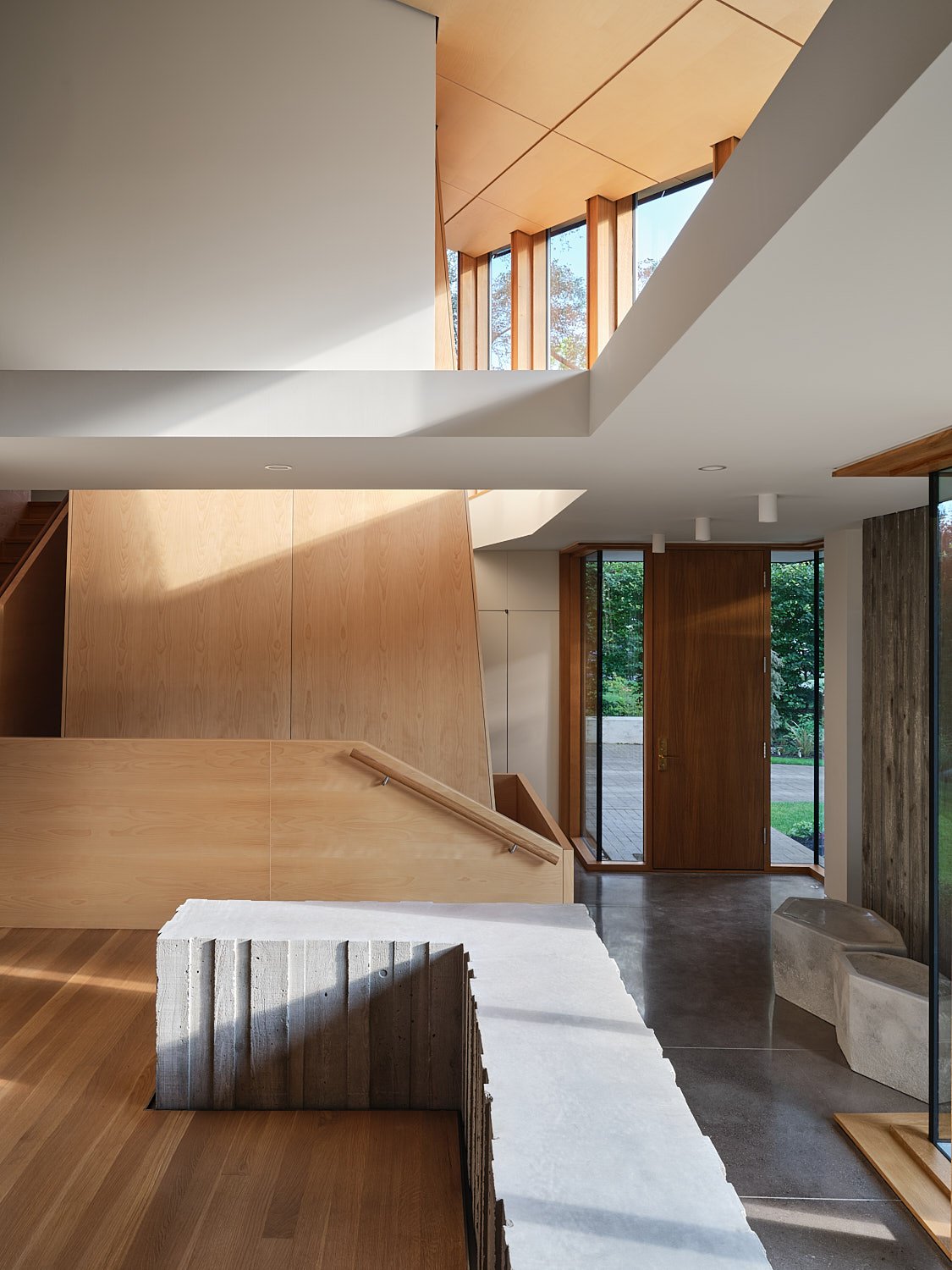 At the entrance and “waterwalk,” voids in the ceiling create the sense of a soaring double-height volume and carve out moments of intimacy.

One might (reductively) describe the house, which measures 356 square metres, not counting the basement, like this: It has an L-shaped footprint. It’s clad in zinc, concrete and Corten steel. It sits on a flat lot, surrounded by lush gardens. There’s a greenhouse and pool in the back. But these descriptions understate just how surprising the design program is. The roof, for instance, zigs and zags like the bellows of an accordion, sloping upward from the southeast corner of the building, where the overhang is low enough to poke you in the eye, to the northwest corner, where it sits 5.7 metres above grade. Between these two extremes, at the crook of the L, is a tower that contains bathrooms, a stairwell and a wine cellar, and that appears from the outside like a tent pole holding up the entire edifice. 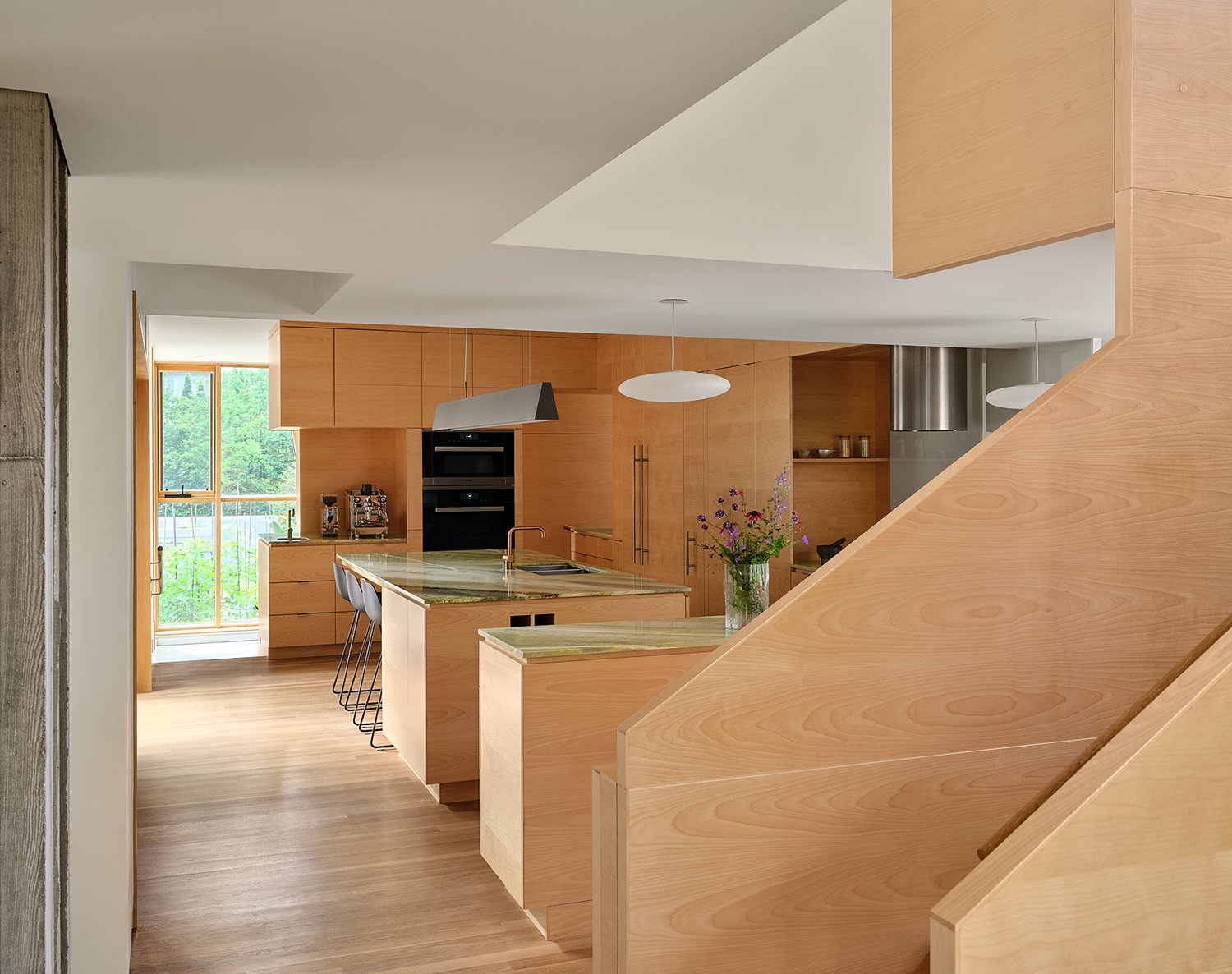 The serene kitchen is crafted from white birch, with counters in a pea-green Irish Verde marble.

The layout is more experiential than coldly rational. You feel the effects in your nerve endings as you move from compressed rooms to those that feel capacious, like forest clearings. You might start in the southeastern corner, where the ceiling is lowest — a fireside living area with wraparound windows. You would then pass through a strikingly narrow, upward-sloping passage carved, like a crevasse between two boulders, from the concrete fireplace wall. It’s a relief to arrive in the dining room, where the ceiling reaches a double height.

From there, you get to the bend of the L, where the space seems to open vertiginously. Lookouts by the stairway offer views upward to the top of the tower and downward to the basement. Then, you pass through a small antechamber with a 2.13-metre-high drop ceiling before arriving at the kitchen, where the ceiling height is a more generous 2.74 metres. The sleeping quarters and guest suites are above the kitchen in tall, cathedralesque rooms with slanted walls that taper like conifers. The various steps and jogs make the terrain uneven, as if the ground were layered over boulders and berms. Cuts in the ceiling — or angel windows that link rooms to one another — create a sense of interconnection, like gaps in foliage that channel sunlight. “We wanted to accentuate that sense of flow,” says Katja. 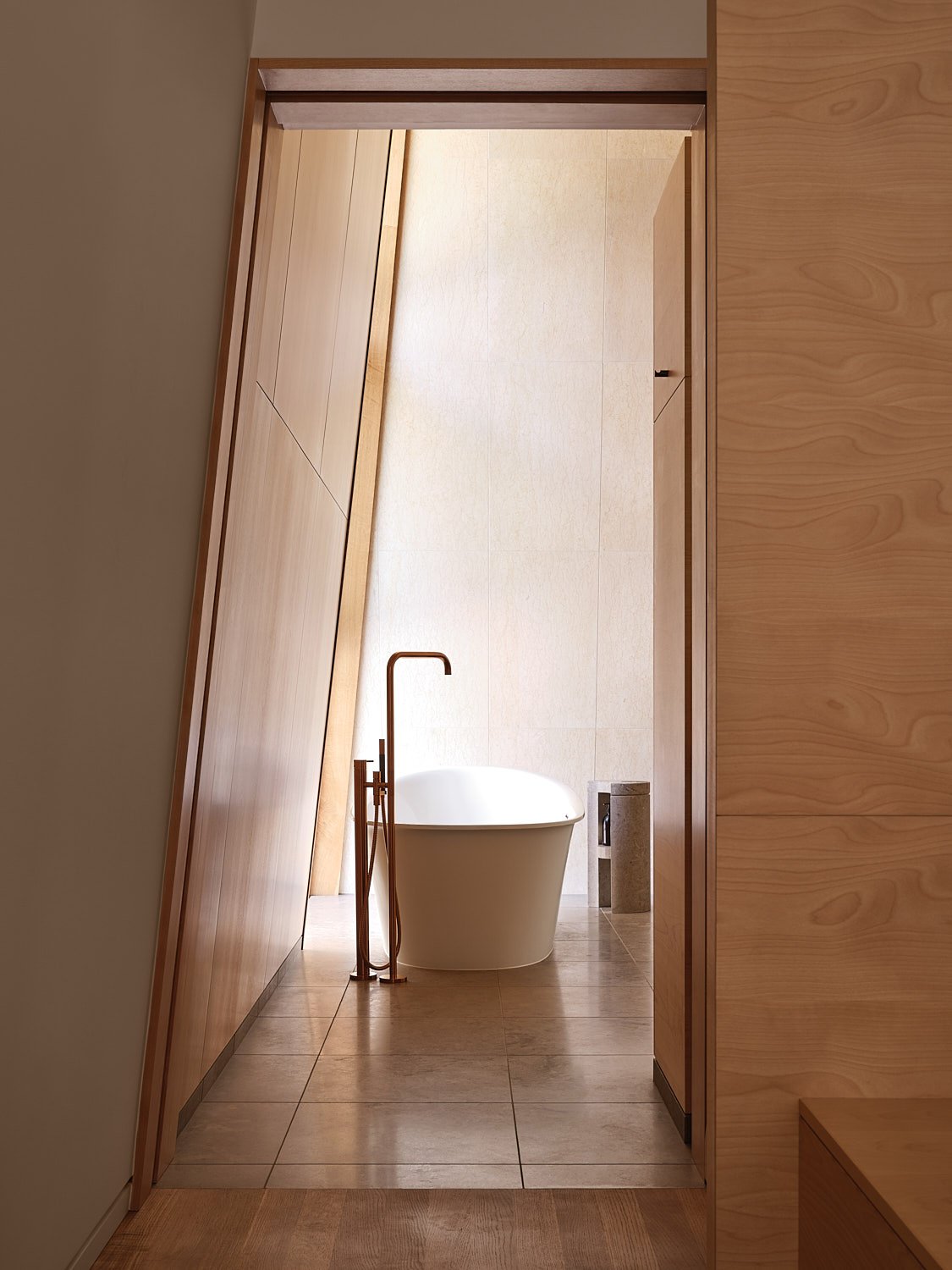 Upstairs, a canted opening leads to a bathroom that can be sealed off with pocket doors. 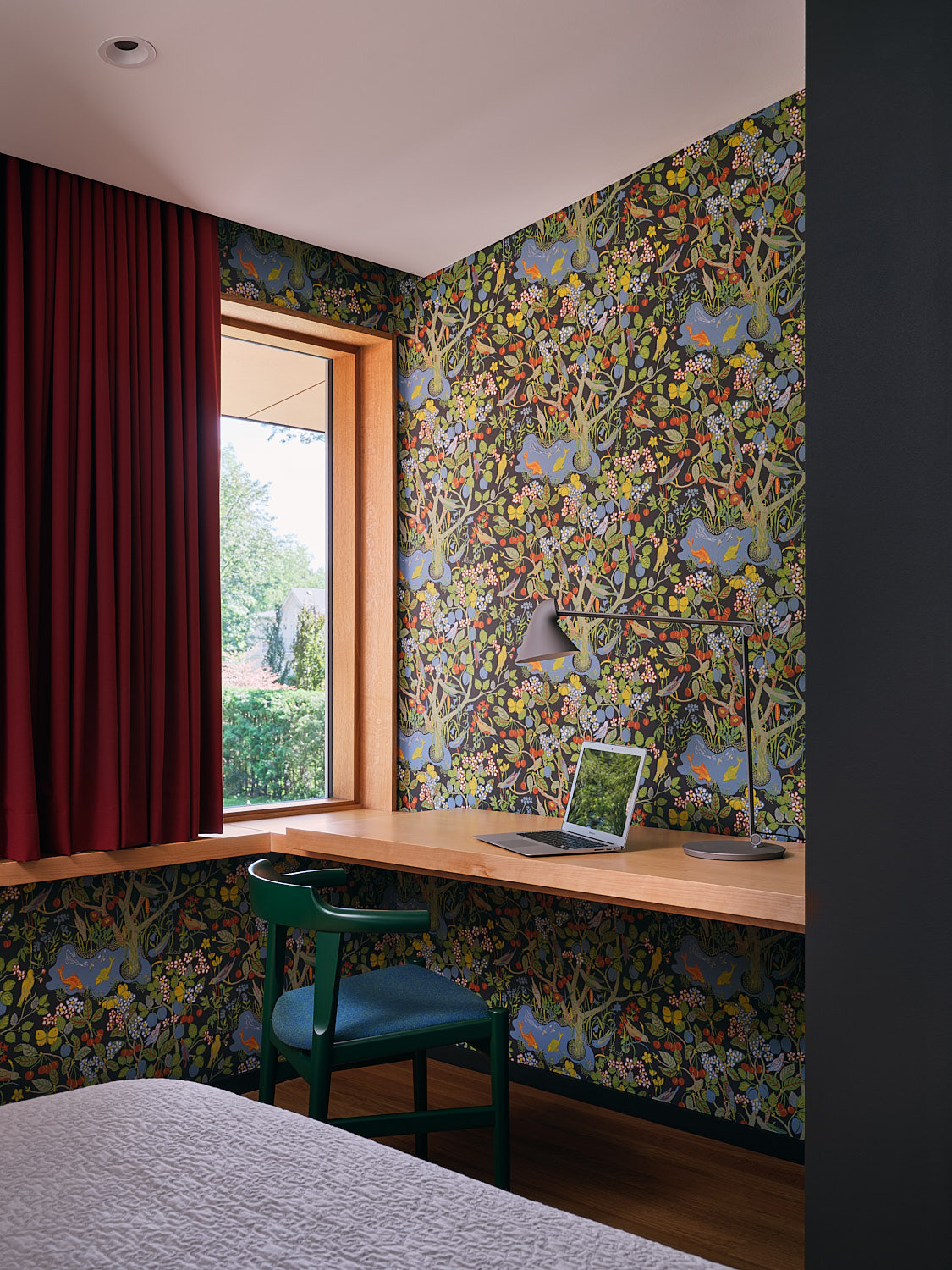 While most of the home is adorned with subdued Danish furnishings and fixtures, the guest bedroom features a hit of exuberance in the form of a classic floral wallpaper by Josef Frank.

The architects chose furnishings to evoke both variation and continuity. The overall palette is mid-century Scandinavian — Katja is from Denmark, after all — with unique pieces that accentuate each room, from Hans Wegner’s enveloping Papa Bear chair tucked into the southeastern nook to Poul Henningsen’s biomorphic Artichoke lamp in the dining area and the Josef Frank wallpaper in the guest bedroom, which depicts, in storybook colours, a woodland teaming with birds and butterflies. Katja is creating bespoke rugs for the home, with touches of burnished red and deep green redolent of a forest floor. “It’s not just about bringing in pleasant light and warm materials; it’s also that more tactile textiles are important to us,” she says of the interior design program. 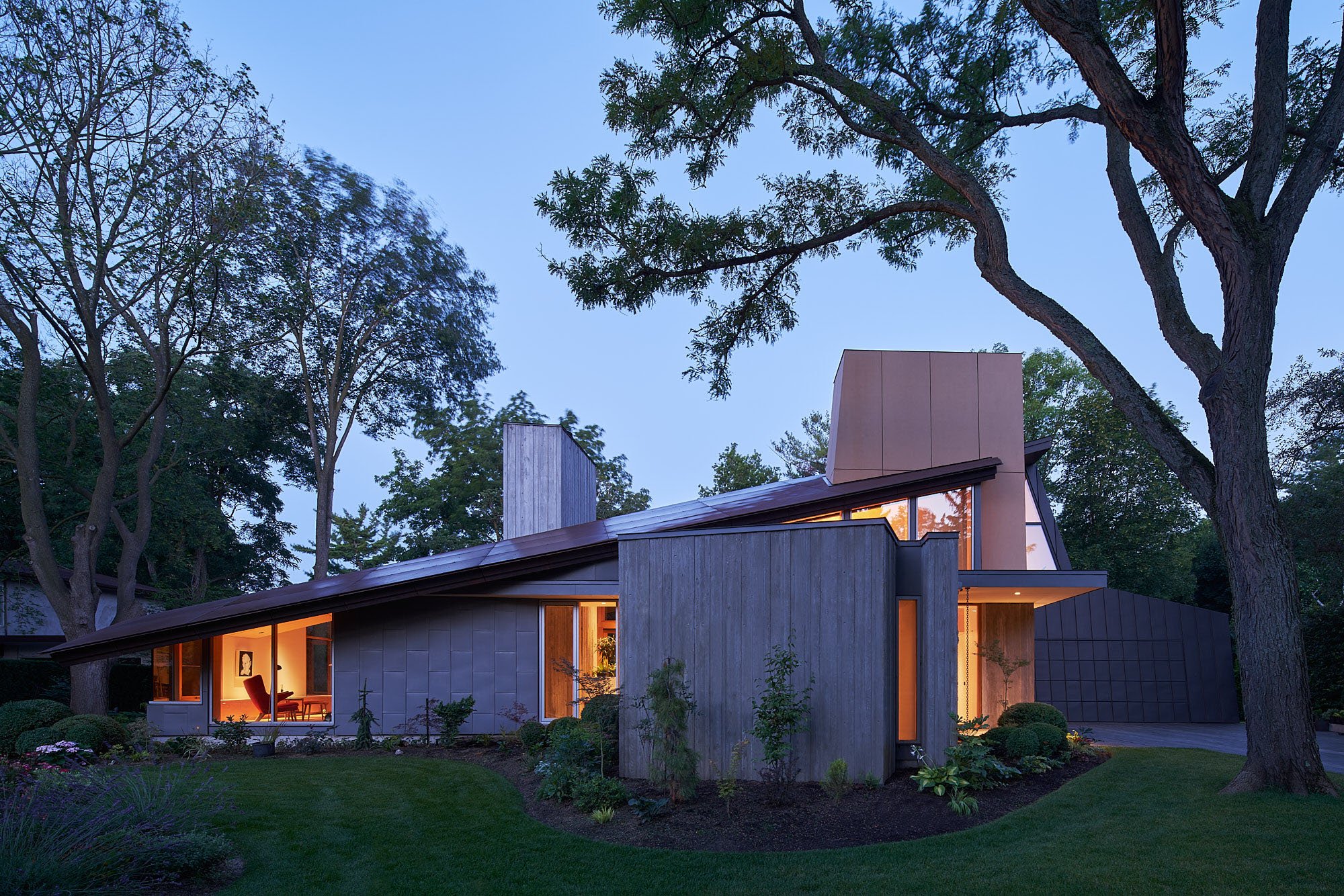 A dramatically sloped roof unites the various volumes of the house, which occupies a generous lot just north of Toronto.

I asked Adam and Katja if they were influenced by any designers in particular, and they were hesitant — as folks in their line of work so often are — to just give me a list of names. After leaving, however, I found myself thinking not of an architect but of a scientist: Suzanne Simard, the celebrated ecologist from the University of British Columbia, who has come to understand forests not as random agglomerations of living organisms but rather as co-operative ecosystems where trees share canopy space and pass both information and nutrients between them via subterranean fungal networks. Ecology — like good design — can be so complex it is difficult to describe in words. But to say that it is intricate is not to say that it is random or haphazard. 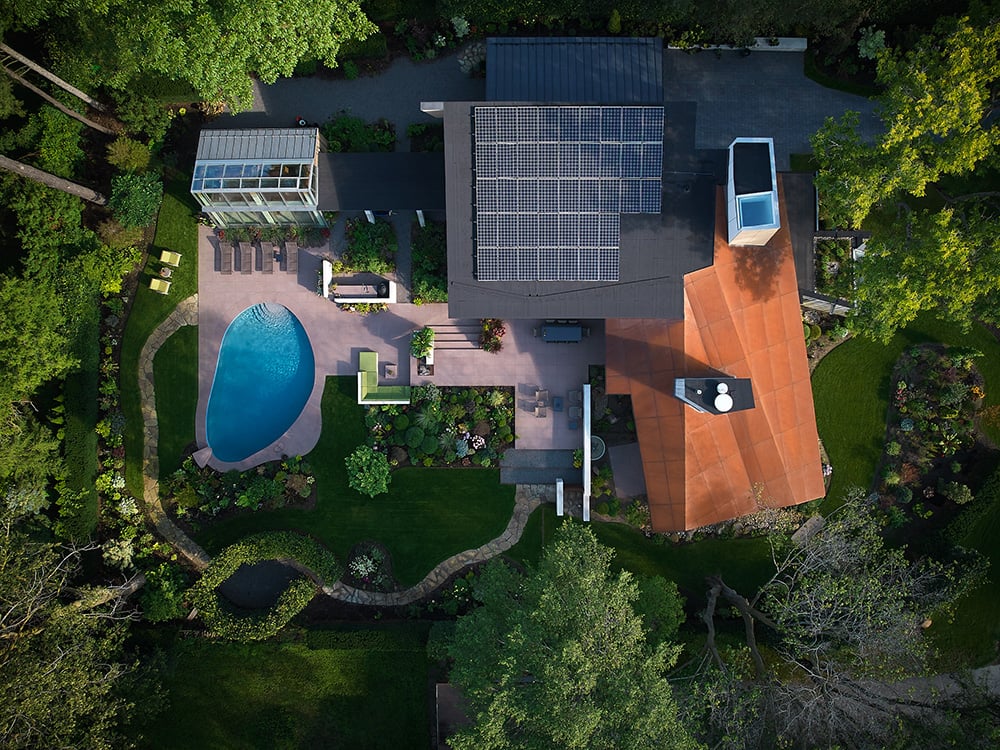 An aerial view of Dove House, including its multi-level terrace and greenhouse, shows how landscape is integral to the project, inside and out.

At the end of my visit to the house, Adam took me to the basement to show me the mechanical units: rooms with water heaters, gas ventilation systems, storage tanks and reams of pipes and ductwork. “As an architect, this stuff takes up much of your time,” he says, “but nobody ever sees it.” We then headed outside to see the solar panels on the roof, which, on sunny days, generate more than enough electricity to power the home. If the house were a forest, these would be the root and canopy systems that sustain it. 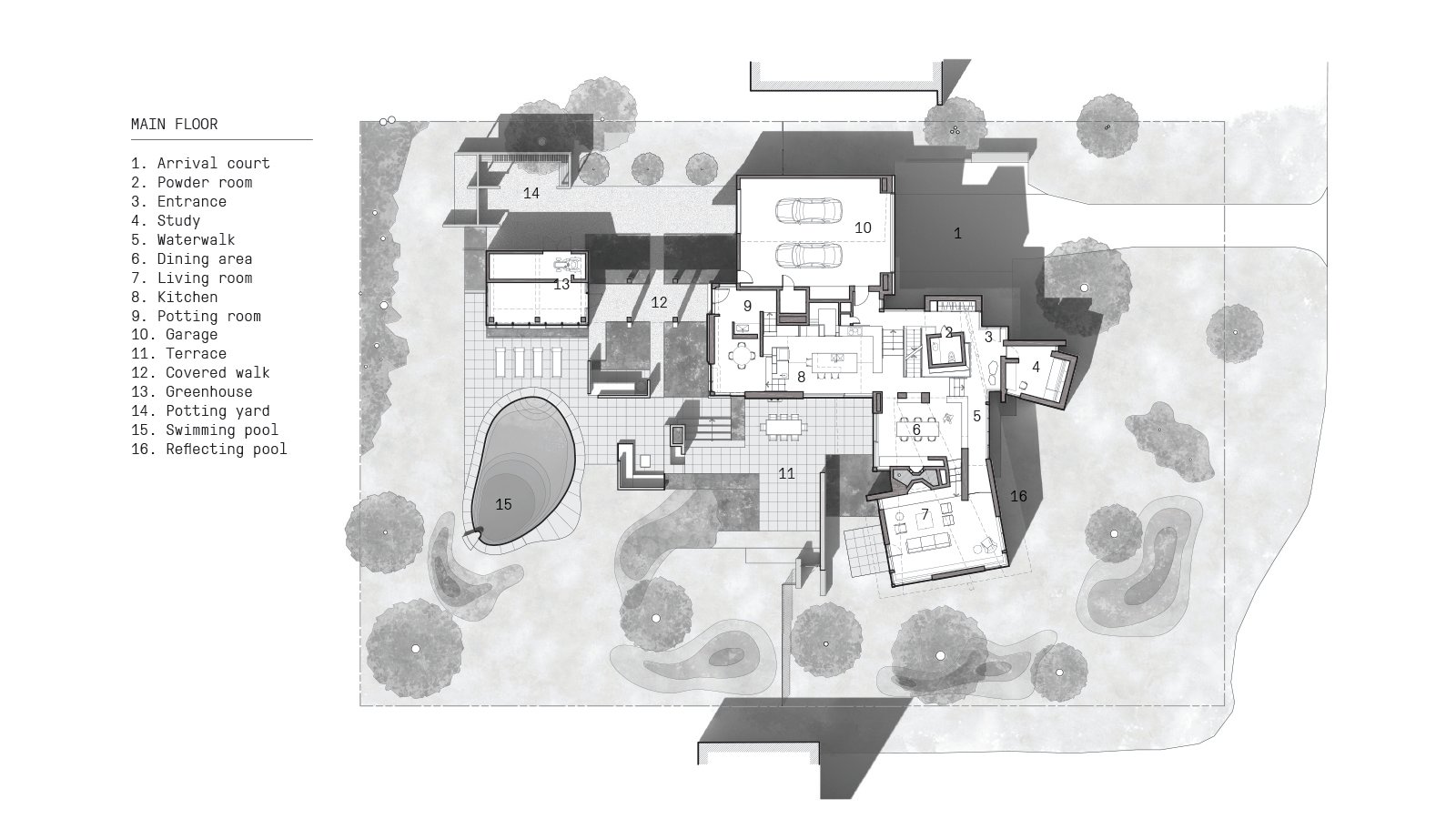