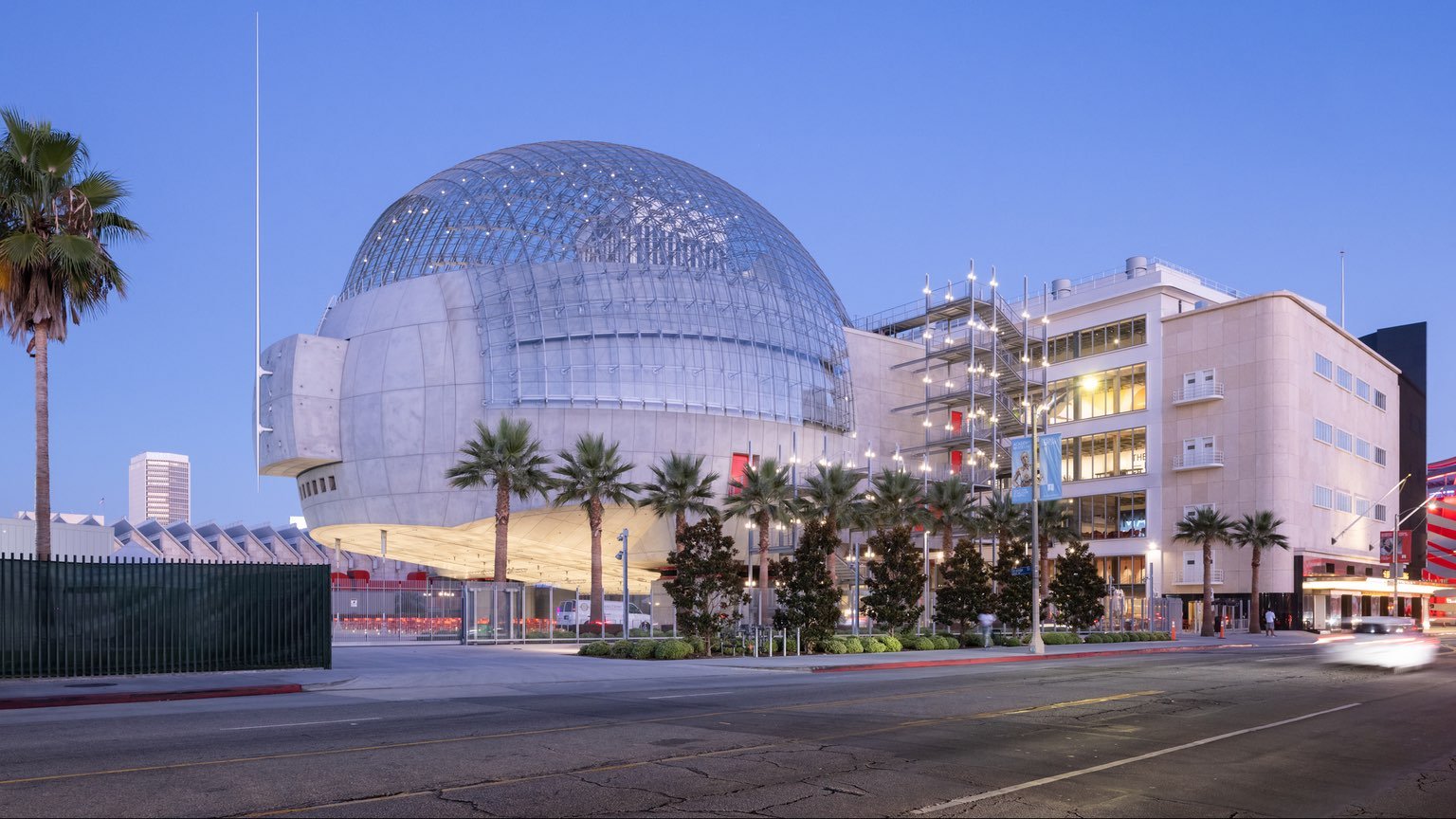 Hollywood’s latest blockbuster isn’t playing on any streaming services. In fact, you can only experience it in one location: midtown Los Angeles. The Academy Museum of Motion Pictures explores the 125-year history of global cinema, part of a stated mission to “turn the dream factory inside out.” 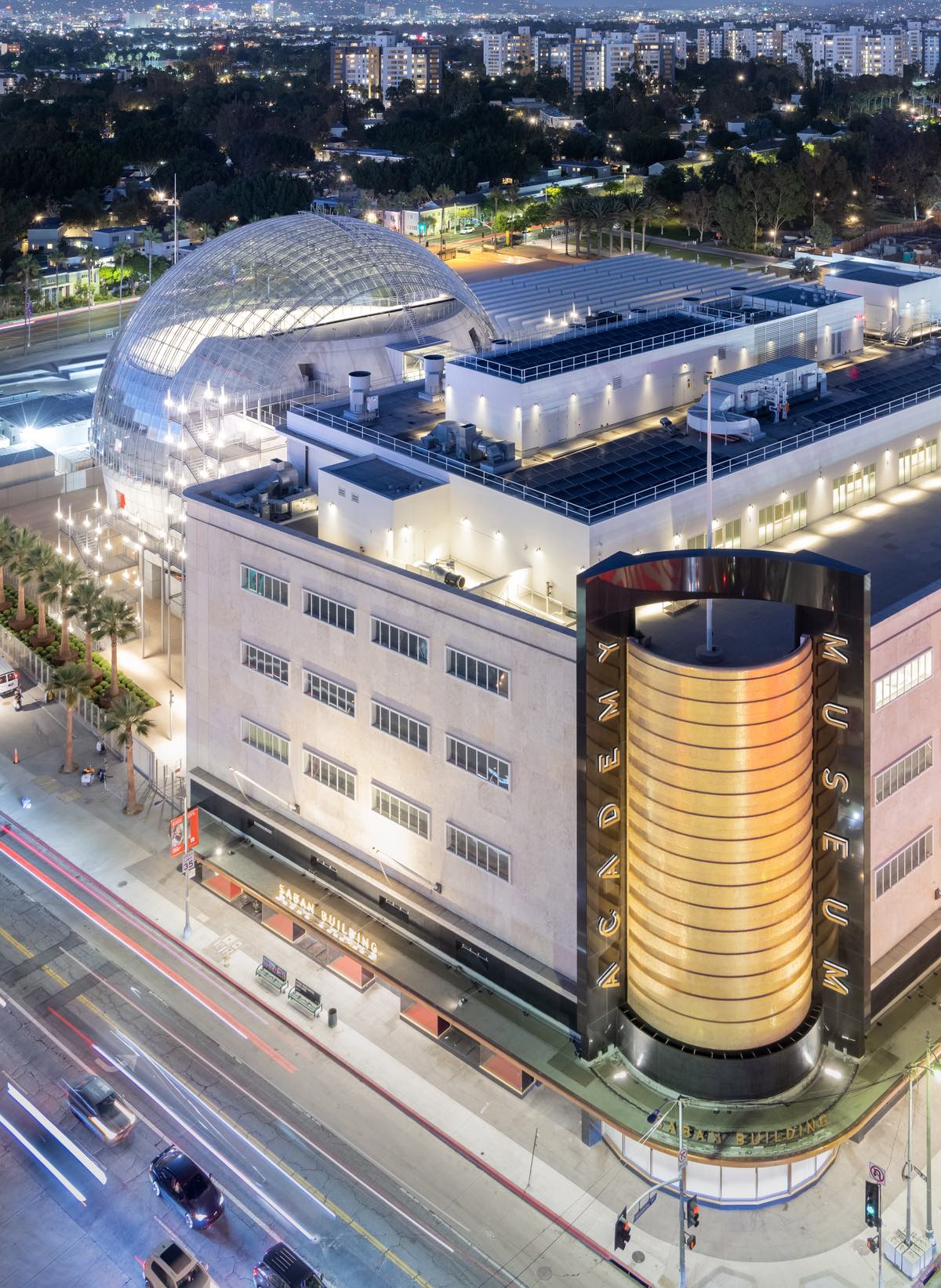 Nine years ago, the Academy of Motion Picture Arts and Sciences — the same organization that hands out the Oscars — commissioned Renzo Piano Building Workshop and Gensler to remodel the former May Company department store. (The art deco landmark has since been renamed the Saban Building.) Besides repairing its limestone cladding and cylinder of gold Venetian mosaic, the architects also replaced a later addition with a north wall of glass, stripped the interior to its concrete frame and cut into floor plates to create double-height volumes. 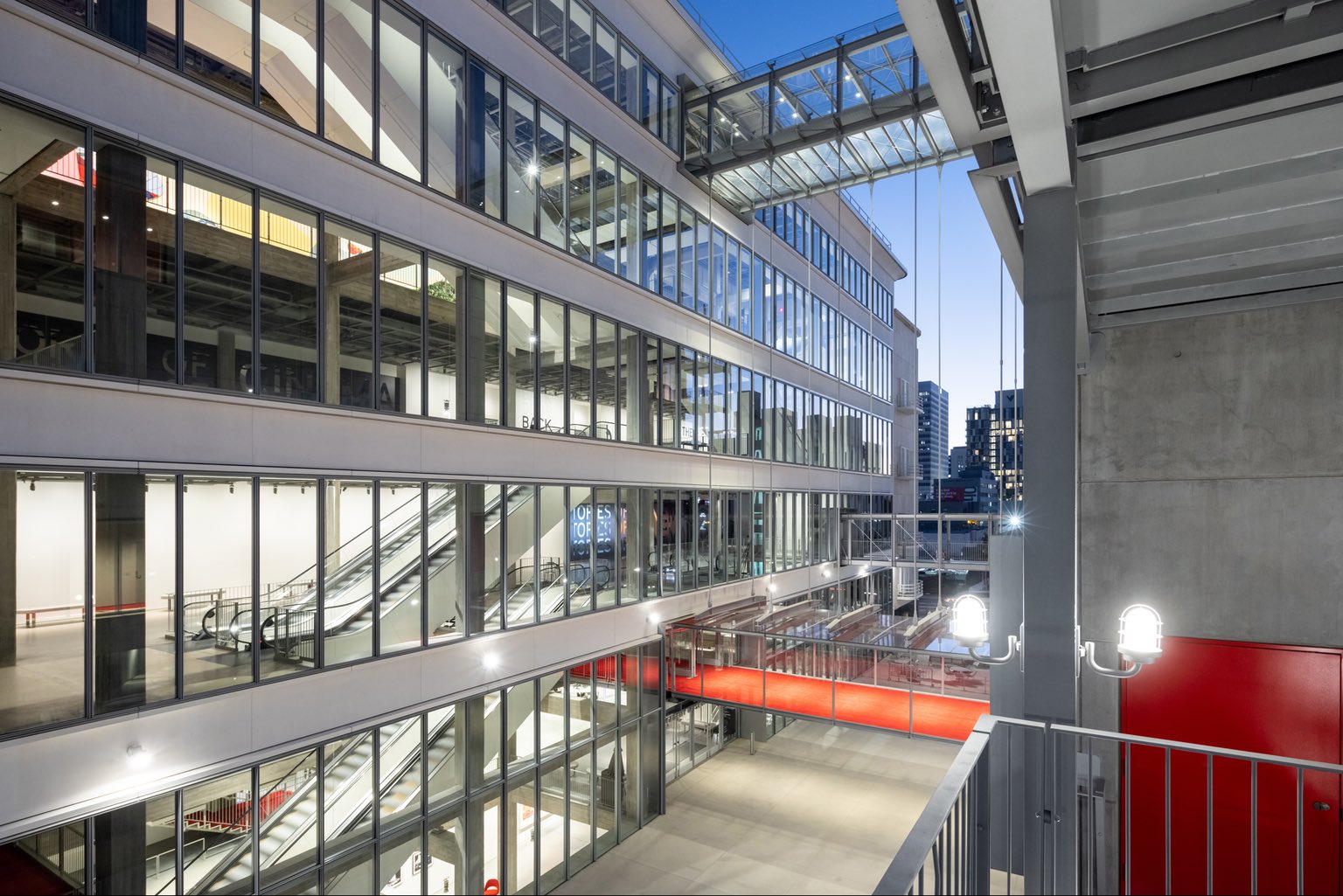 Exhibition areas are concentrated on the four upper levels, leaving the ground floor as open circulation space and the basement as a 288-seat theatre for regular screenings. Kulapat Yantrasast of WHYArchitects led the design of “Stories of Cinema,”the current three-level exhibit that represents every branch of moviemaking — from screenwriting to scoring — with artifacts like the sled from Citizen Kane and the shark from Jaws. 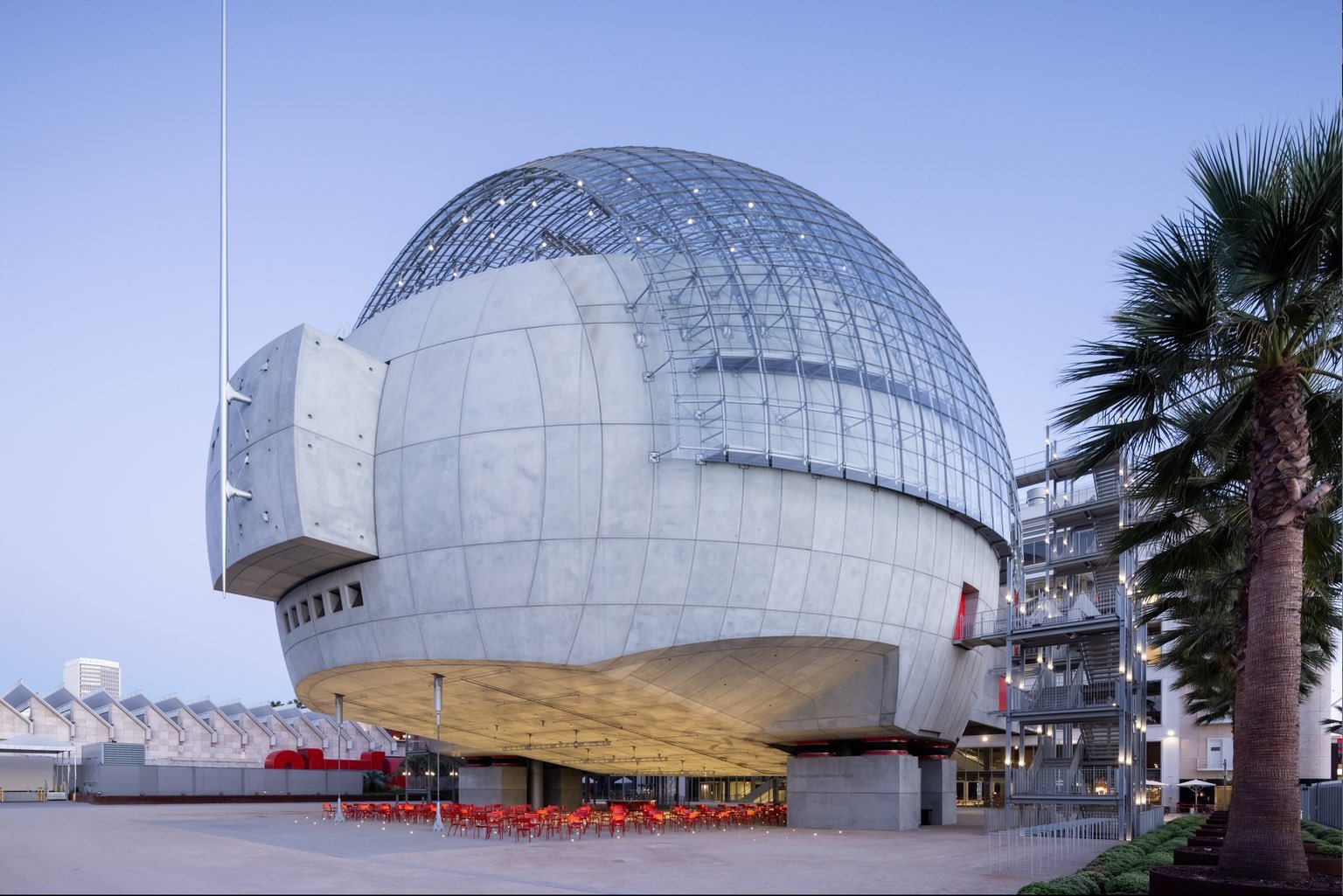 Bridges at two levels link the museum to the David Geffen Theater, a new concrete sphere that is partially shrouded in glass and cantilevered from four massive plinths so that it appears to float. (Seismic tie-downs and base isolators will help to secure the new addition in the event of an earthquake.) “The sphere was conceived as a flying vessel — a spaceship,” says Piano, who was an avid moviegoer while growing up in Genoa. “It levitates above the ground as though it’s about to take off. I like to see how the old building and this building of the future flirt with each other.” 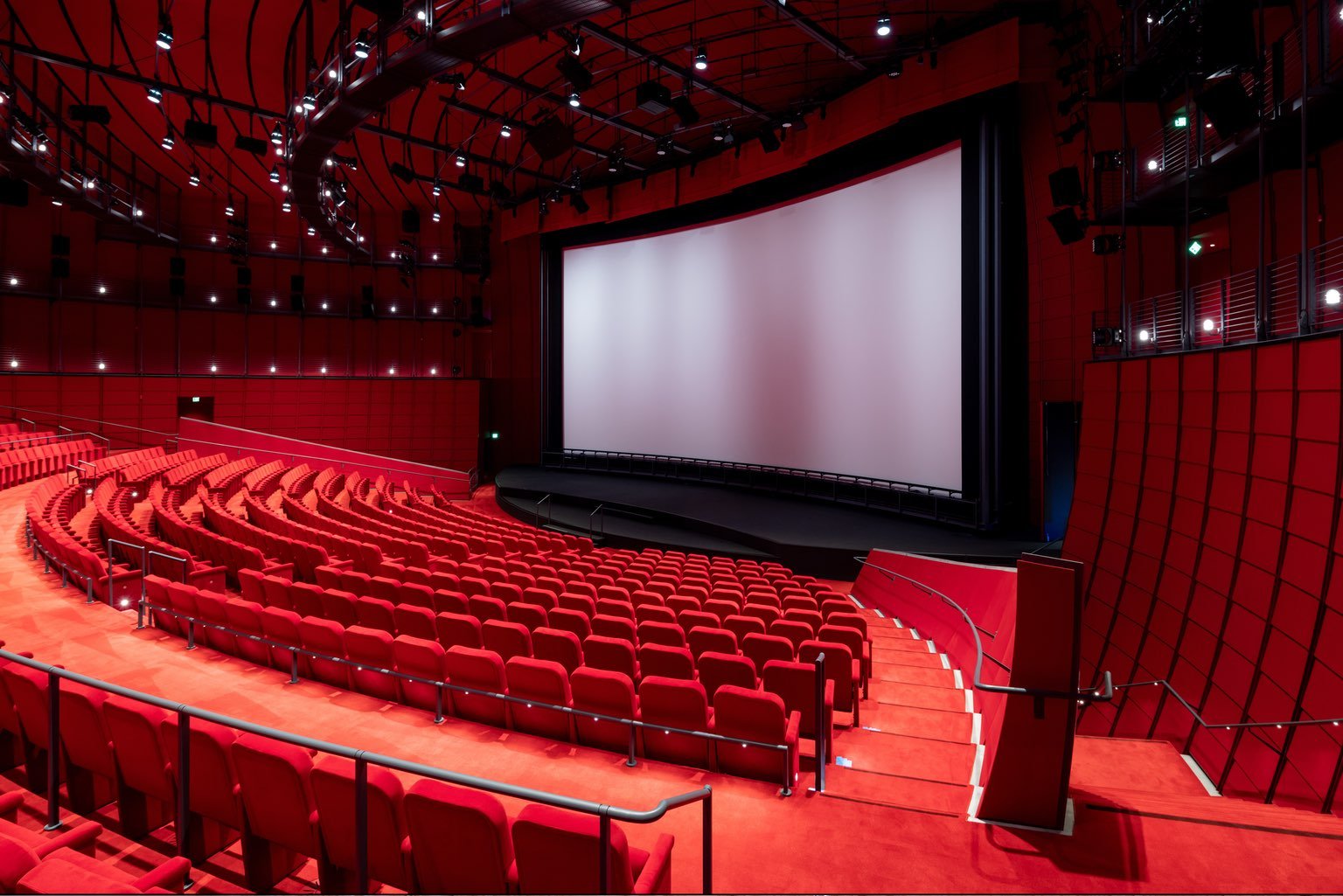 Inside, a thousand red velvet Poltrona Frau seats create a contemporary version of a classic movie palace. Meanwhile, an arched glass membrane sweeps over the rooftop terrace above to form a grand event space that commands appropriately cinematic views of the Hollywood Hills and its eponymous sign.