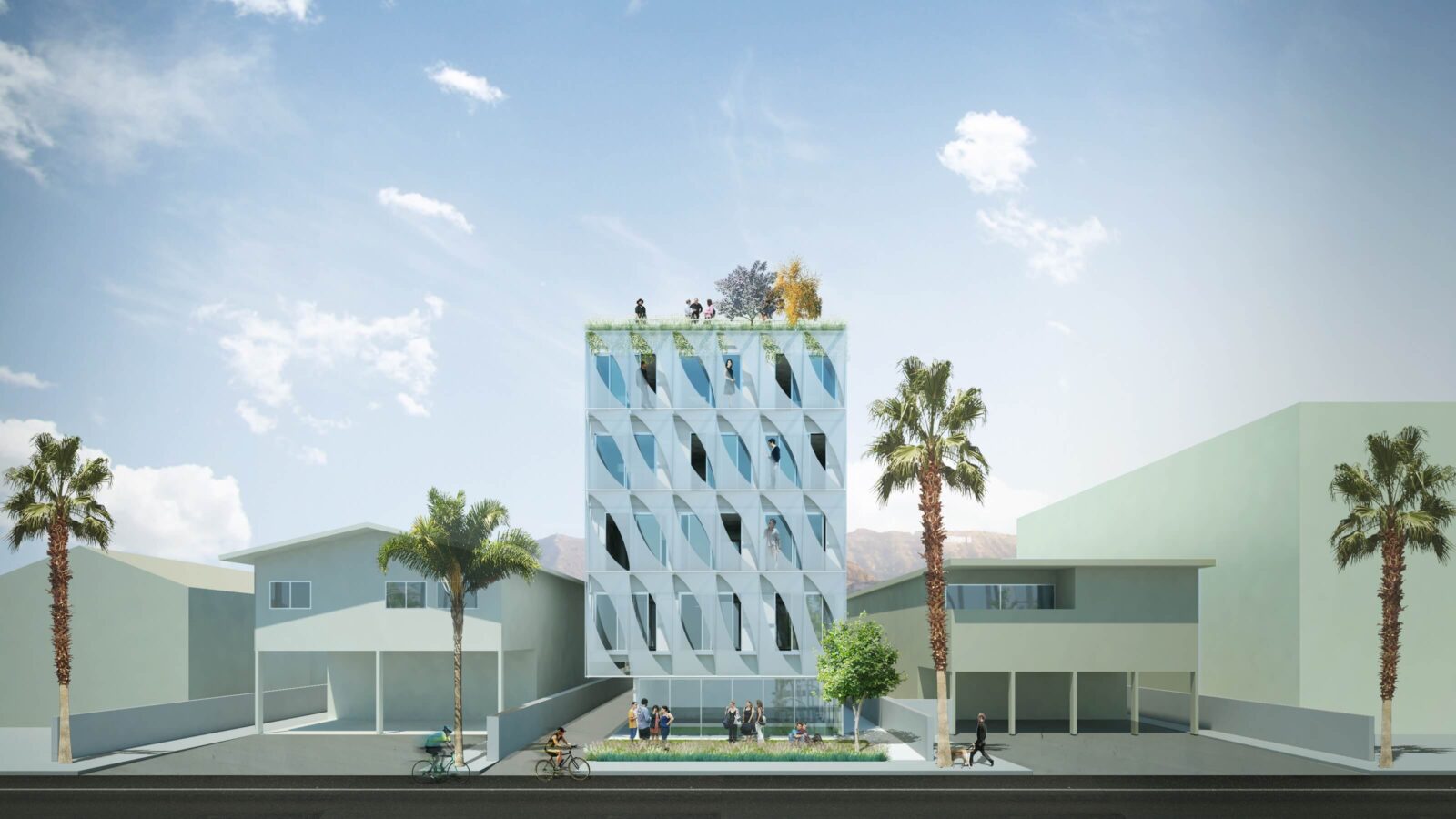 A Prefab Toolkit for Curbing Homelessness

Can Nest Toolkit, by Plant Prefab and Brooks + Scarpa, provide a viable affordable housing solution for Los Angeles County, which saw a 12 per cent increase in homelessness this year?

The Santa Monica firm Brooks + Scarpa has been a trailblazer in what until recently was a niche area: affordable housing that is ecologically sustainable. Not only that, its projects, from Colorado Court to the veterans housing it created for the Skid Row Housing Trust, are vibrant, modern and beautiful.

This past month the firm, led by Lawrence Scarpa and Angela Brooks, released an architectural product called Nest Toolkit, in partnership with Plant Prefab. The kit of parts for customizable building solutions offers modules for erecting anything from a dormitory-style co-living situation with shared amenities to a multi-family development. What’s more, it features off-the-grid energy, water and sewage systems. It was awarded $1-million from the Los Angeles County Housing Innovation Challenge (as one of five proposals receiving a total of $4.5-million in grants) for addressing L.A. County’s growing homelessness problem with scalable, cost-effective and high-quality solutions. 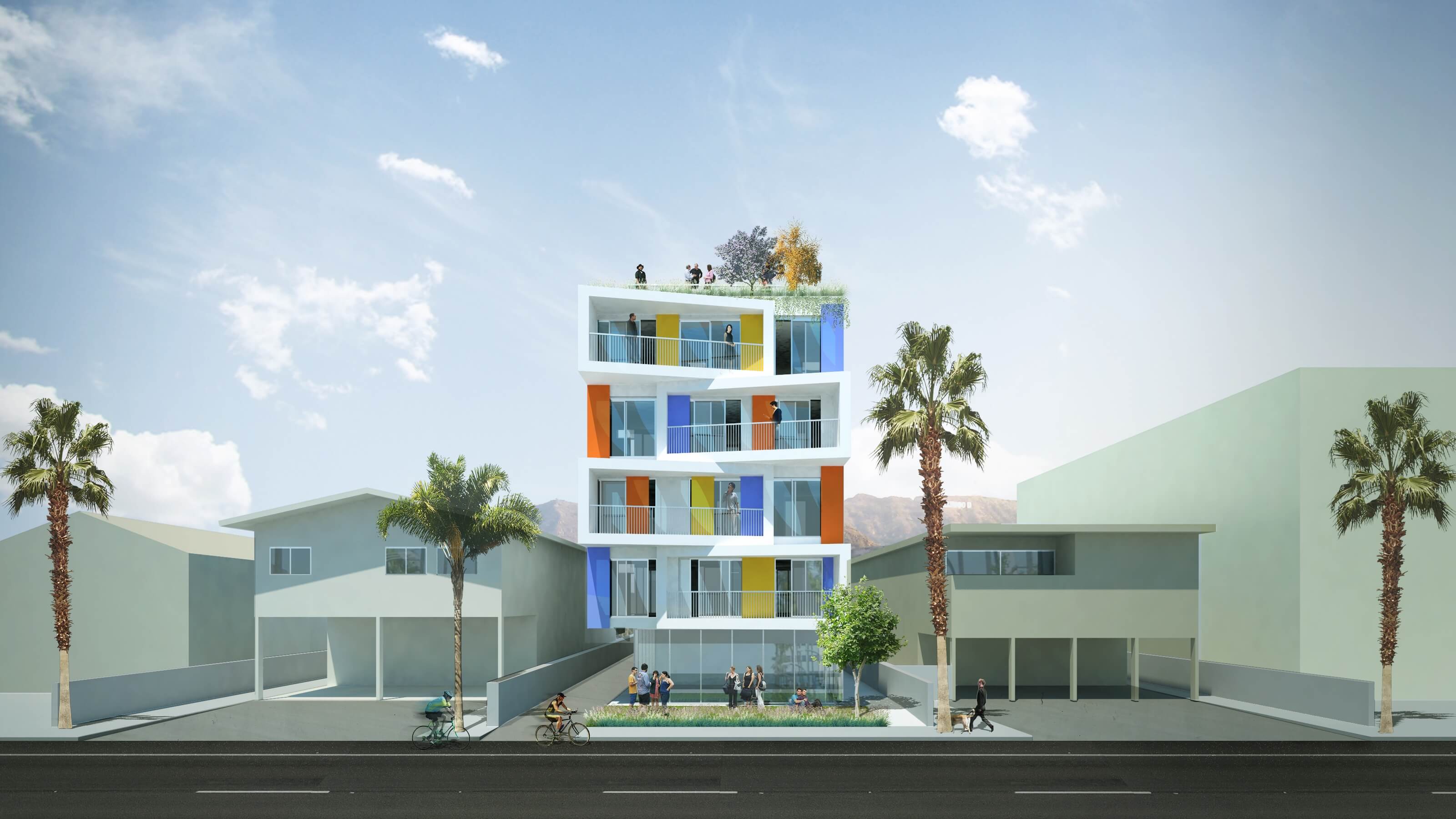 Los Angeles County has seen a 12 per cent increase in homelessness this year – double that of previous years – resulting in over 58,000 people without a fixed address. And those are only the documented folks. For Scarpa, this is the result of political inaction; he cites California’s plan, announced in 2016, to issue $2-billion in bonds to finance up to 14,000 housing units for the state’s 116,000-strong homeless population. “Nothing has happened since then,” Scarpa explains. His firm has also become more proactive in response to the long wait times to get its affordable housing projects out of red-tape limbo: “We have a 325-unit project that has been stuck in entitlements for more than three years. That’s just to get the project approved. It will be a seven-year project before it even hits the ground.” 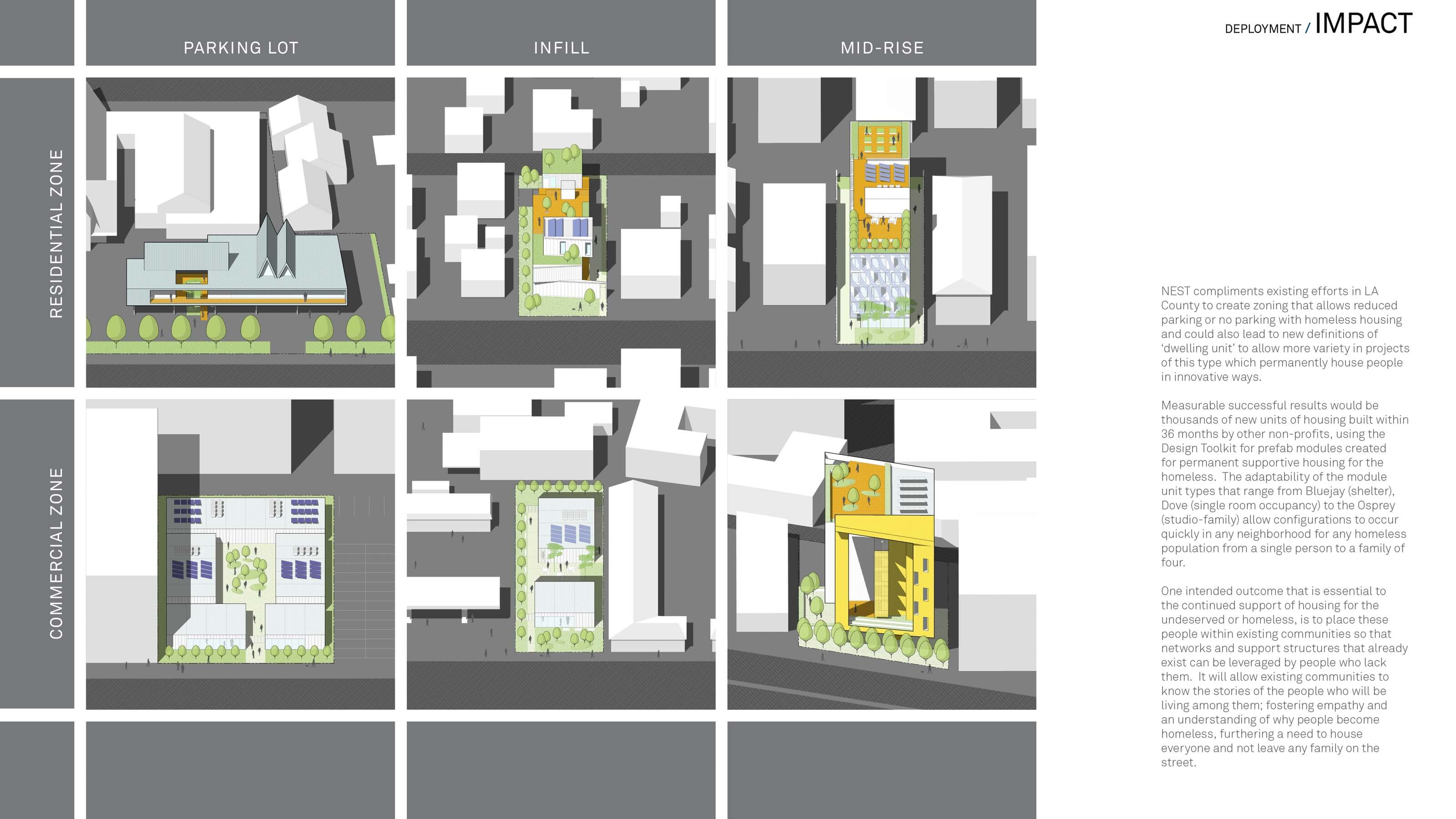 Hence the partnership with Plant Prefab, which owns a prefabrication factory in Rialto, California. Scarpa explains that the firm approached Plant Prefab CEO Steve Glenn with the idea for an affordable housing toolkit; just as the firm was pitching it to Glenn, the L.A. County competition was announced. Their joint proposal responded directly to the situation in L.A. County, which encompasses 107 cities. As Scarpa explains, 80 per cent of the lots in the county are 50 by 150 feet. “We basically tailored our product to that lot size, and went through each city’s building code so that the toolkit could work in any lot of that size in the entire county.” 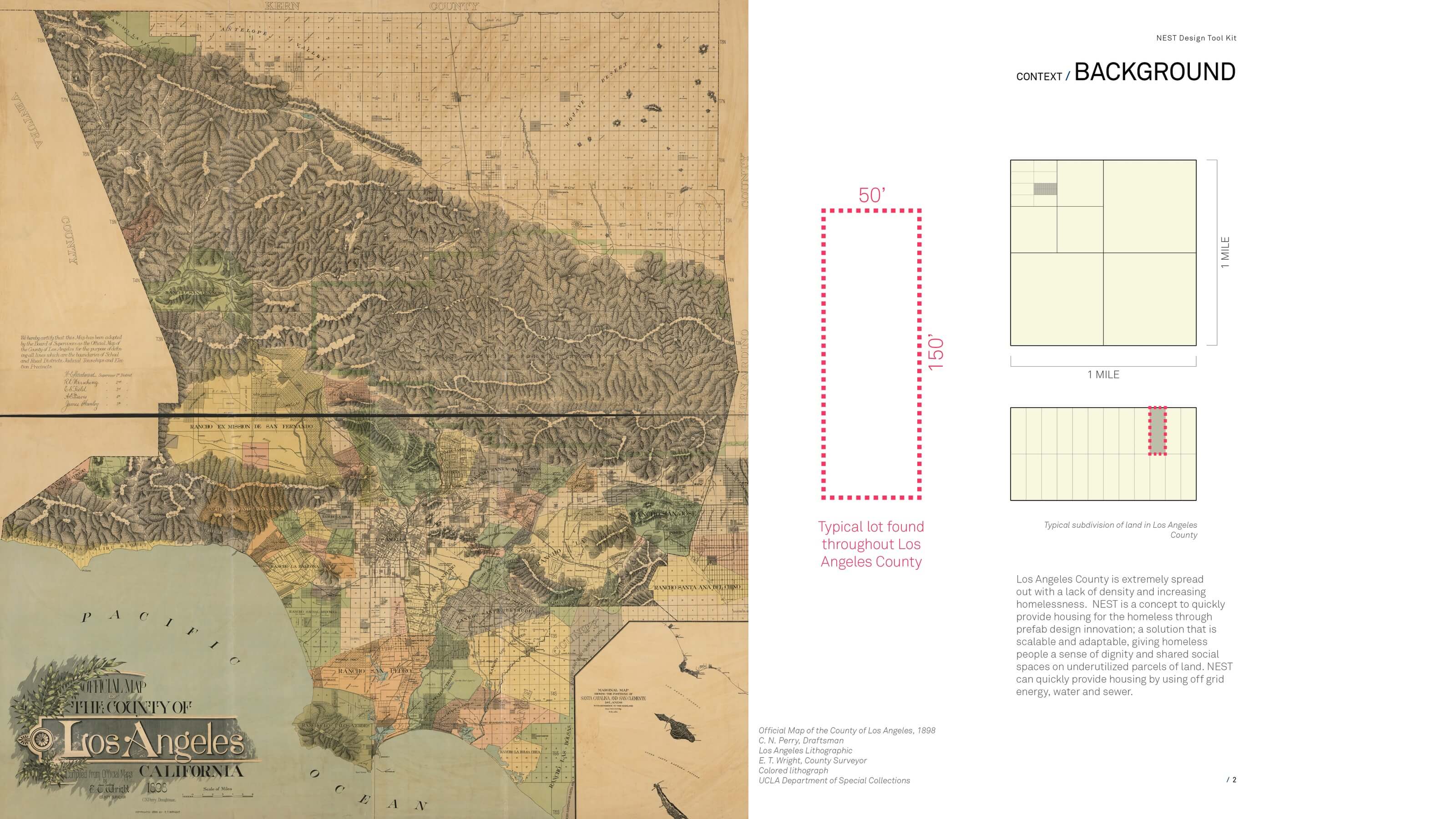 More economical than ground-up builds, prefab construction is particularly well-suited to the development of affordable housing, Scarpa explains. “Affordable housing projects generally cost 20 to 30 per cent more to build than market-rate housing. By doing a lot of the work in a prefab plant, it gets the costs down.” This makes these types of project more palatable to developers. 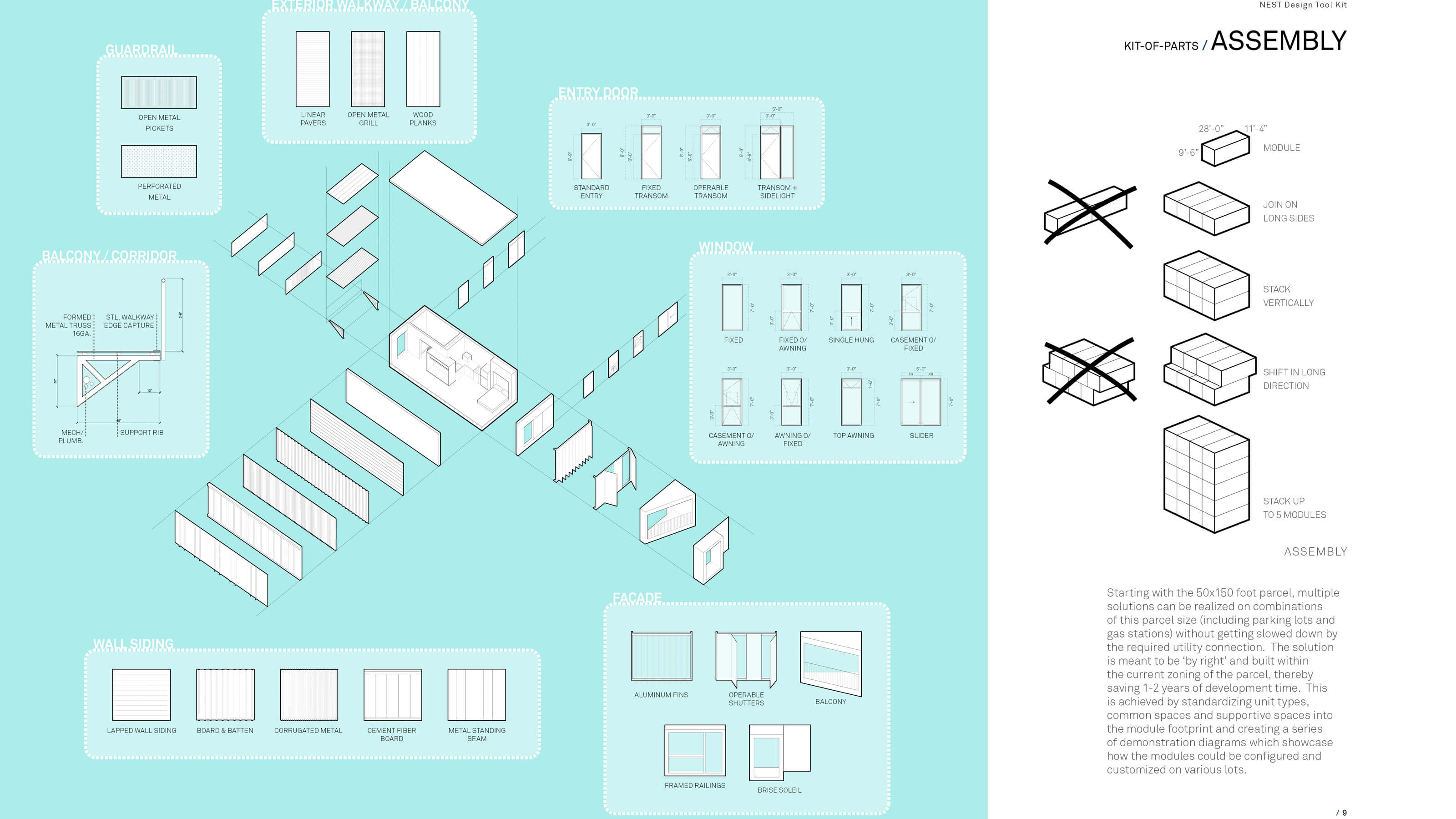 Since Nest Toolkit won the competition grant, the firm has worked out the kinks and the Nest Toolkit is now available for order online. “Any designer can go online and the kit gives them enough latitude to conform the design to their own aesthetic.” Here, the firm has integrated its own high-quality ethos, too, with a variety of creatively conceived facades to choose from, for instance. The one thing still in the works is the configurator tool. But that is only a matter of time. 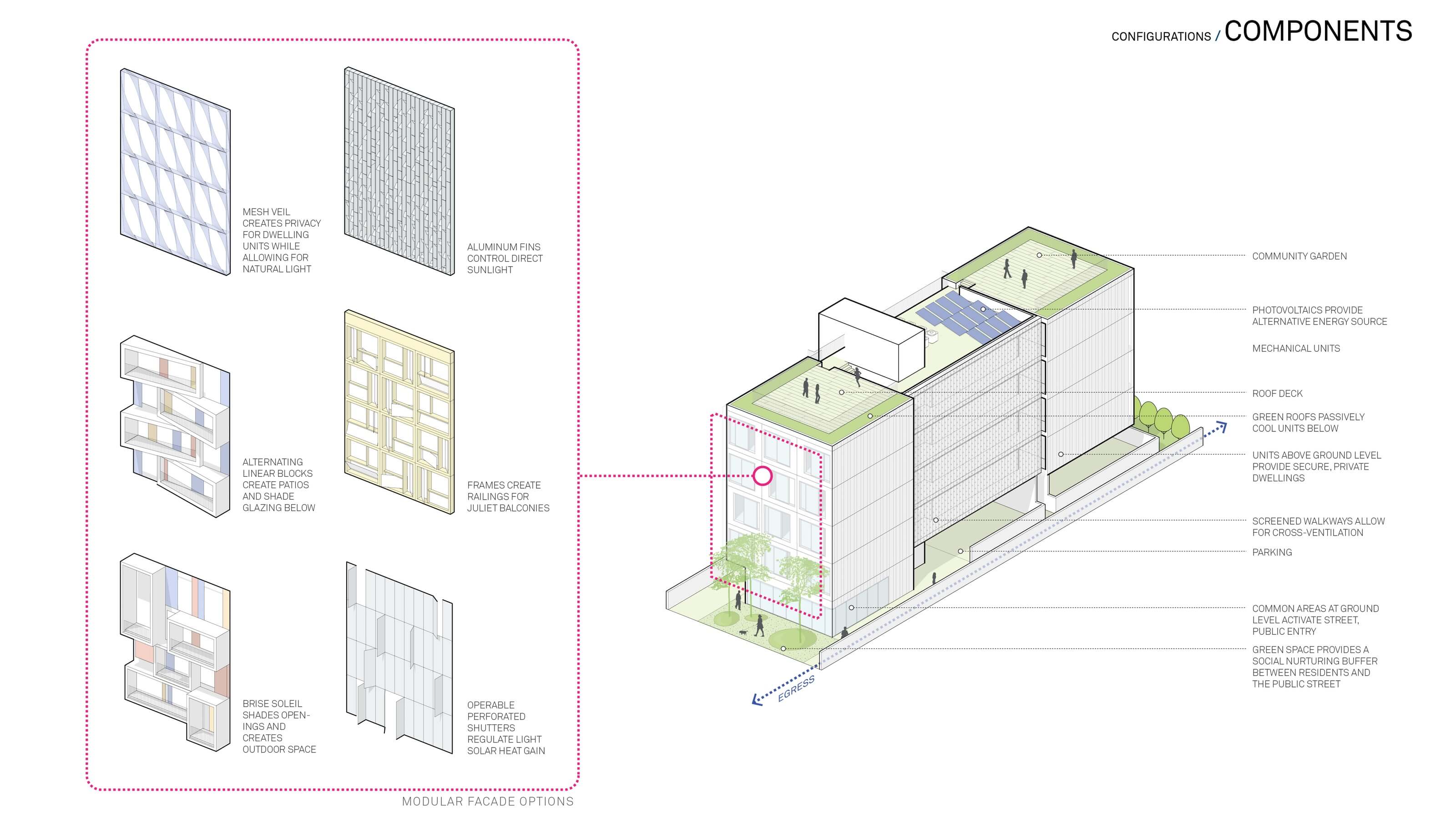 As of now, Plant Prefab and Brooks + Scarpa, working with the Community Corporation of Santa Monica, have secured land to build its first affordable housing project with Nest – and the timeline is much more rapid than those of their previous projects. “We’re hoping to see it built in 18 months,” Scarpa says.

Can Nest Toolkit, by Plant Prefab and Brooks + Scarpa, provide a viable affordable housing solution for Los Angeles County, which saw a 12 per cent increase in homelessness this year?