With The Six, L.A.’s Brooks + Scarpa Develops a Compassionate Playbook for Social Housing
A multi-unit residence in L.A. gives homeless and disabled veterans a place to lay their heads. 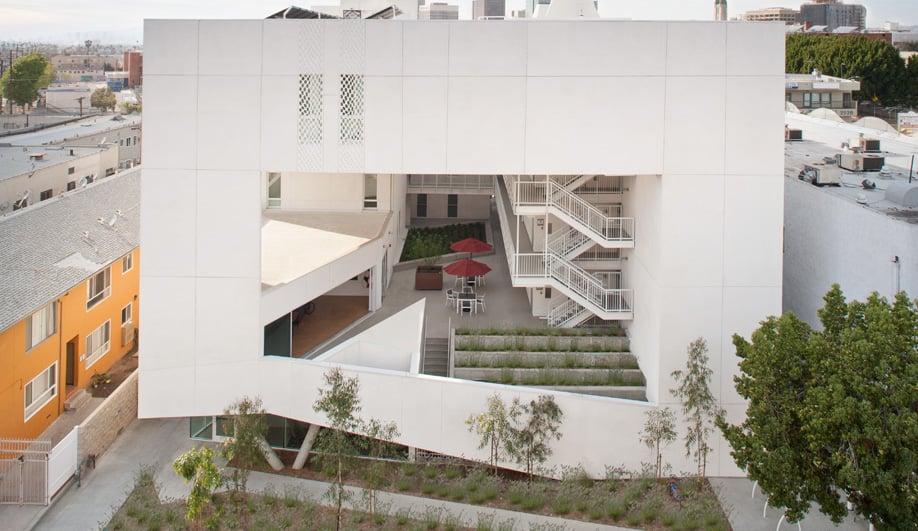 Clad in white stucco, the Six centres on a large and airy courtyard screened by stepped planters.

A multi-unit residence in L.A. gives homeless and disabled veterans a place to lay their heads.

When soldiers say “I’ve got your six” they mean they’re covering your back, and a block of affordable housing partially reserved for homeless and disabled veterans takes its name from that phrase. The Six is located in MacArthur Park – a densely populated, low-income neighbourhood of Los Angeles – and is the first project to be developed by the non-profit Skid Row Housing Trust beyond downtown (though a second, designed by Michael Maltzan in Van Nuys, has just been completed). The commission for the Six went to Brooks + Scarpa, an award-winning L.A. practice with a strong commitment to social housing and sustainability. The architects created a LEED Platinum block of 45 single-occupancy rooms and seven one-bedroom apartments that also includes generous shared spaces. 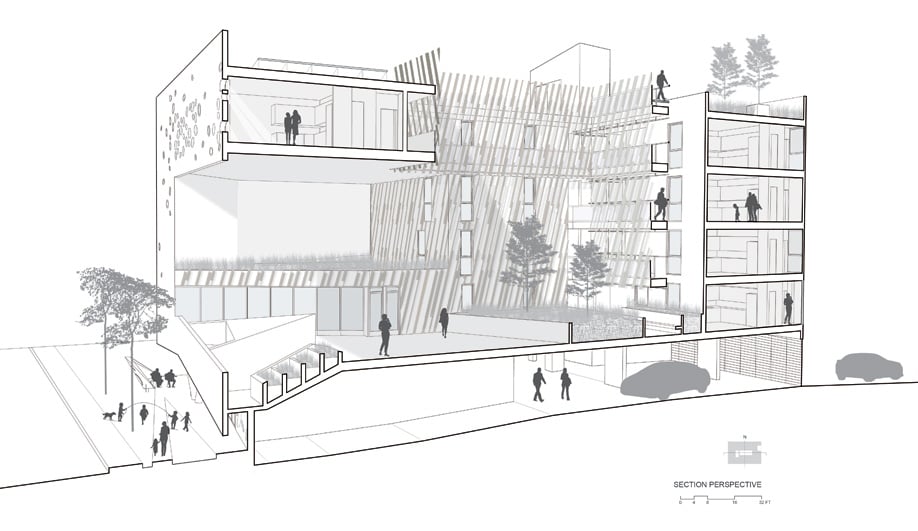 “The challenge was to create an environment that offers privacy and community, protected from the street but not walled off,” says partner and design principal Lawrence Scarpa. “Military personnel are a tight-knit brotherhood, but some of the residents have been traumatized, mentally and physically, so we added extra insulation to protect rooms from distracting sounds.” The 12,100-square-metre block was constructed on a tight budget of $2,705 per square metre. Designer and project manager Diane Thepkhounphithack and her team drew on their experience to create a frugal but spatially rich building. It’s a model of thoughtful design that relies on natural ventilation, geothermal and solar-assisted heating, and has a low carbon footprint. 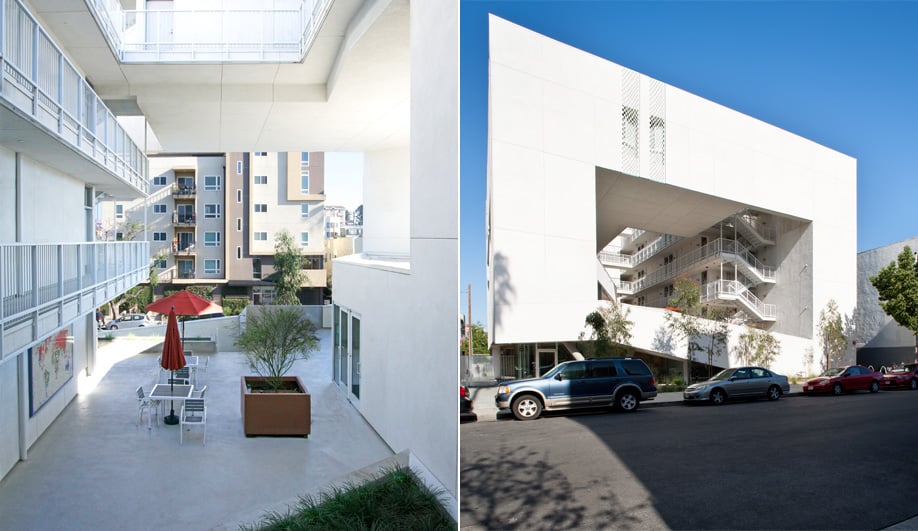 The five-storey building is clad in white stucco, tilted up at one corner to reveal the office entrance and cut away on the street facade and one side. A small garage (few residents use cars in this pedestrian-friendly neighbourhood), bike storage, and counselling and computer rooms occupy most of the ground floor. Stepped planters screen the central courtyard from the street, and the openings frame views of rooftops and palms that seem to have jumped right out of La La Land. The open areas are bathed in sunlight for much of the day and refreshed by cool air that is drawn through from the east and south. To one side is a community lounge and a self-service laundry, and the stairs and galleries that link the upper floors encourage social interaction. 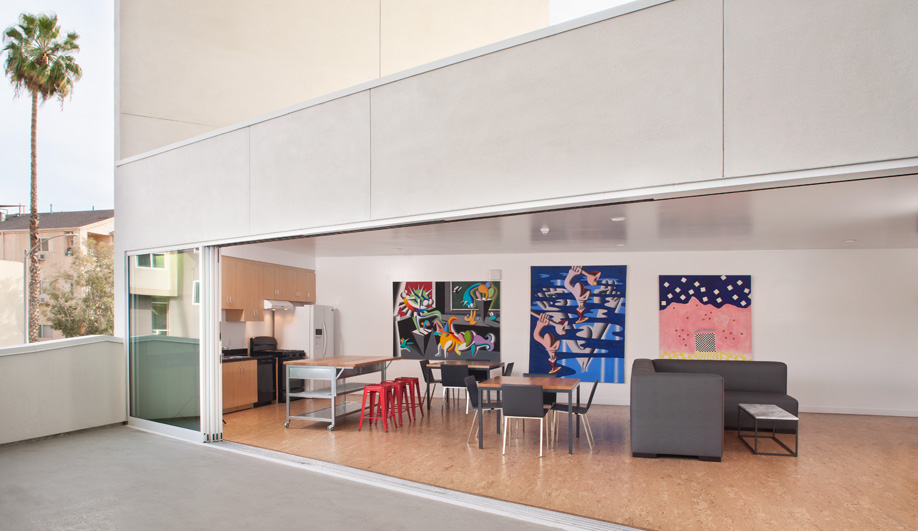 Artworks on loan from the Marciano Art Foundation spruce up the atrium’s adjoining lounge.

Still to come is a screen of cast aluminum battens with the texture and colour of ipê wood. These will be placed diagonally around the galleries, from the courtyard up to the roof terrace, to add another layer of privacy and enclosure. Installation has been delayed in part by the city’s insistence that $200,000 be expended on a window-cleaning system that may never be used. The inflexibility of the L.A. Department of City Planning, and in particular its Building and Safety officials, seriously impedes innovation, even though the city desperately needs more affordable housing.

Happily, architects and clients are skilled in negotiating the labyrinth of restrictions and in this case were able to achieve their goals. The site was formerly a parking lot and poor soil conditions required piles to be driven 12 metres deep. Funding depended largely on tax credits, so the Six had to be completed on a tight schedule. But there is no sign of parsimony. Though the finishes are spare, there are more amenities and open space than in most market-driven developments. The 52 units are small (33 to 46 square metres) but well equipped, with a full kitchen, a bed that doubles as a sofa, a dining table and accessible showers or tubs. The Marciano Art Foundation has loaned some paintings from its collection and these add a vibrant splash of colour. Over a third of the rooms are set aside for veterans who are ineligible for VA benefits, and the Six provides them, and other homeless people, with a safe haven in which to rebuild their lives.