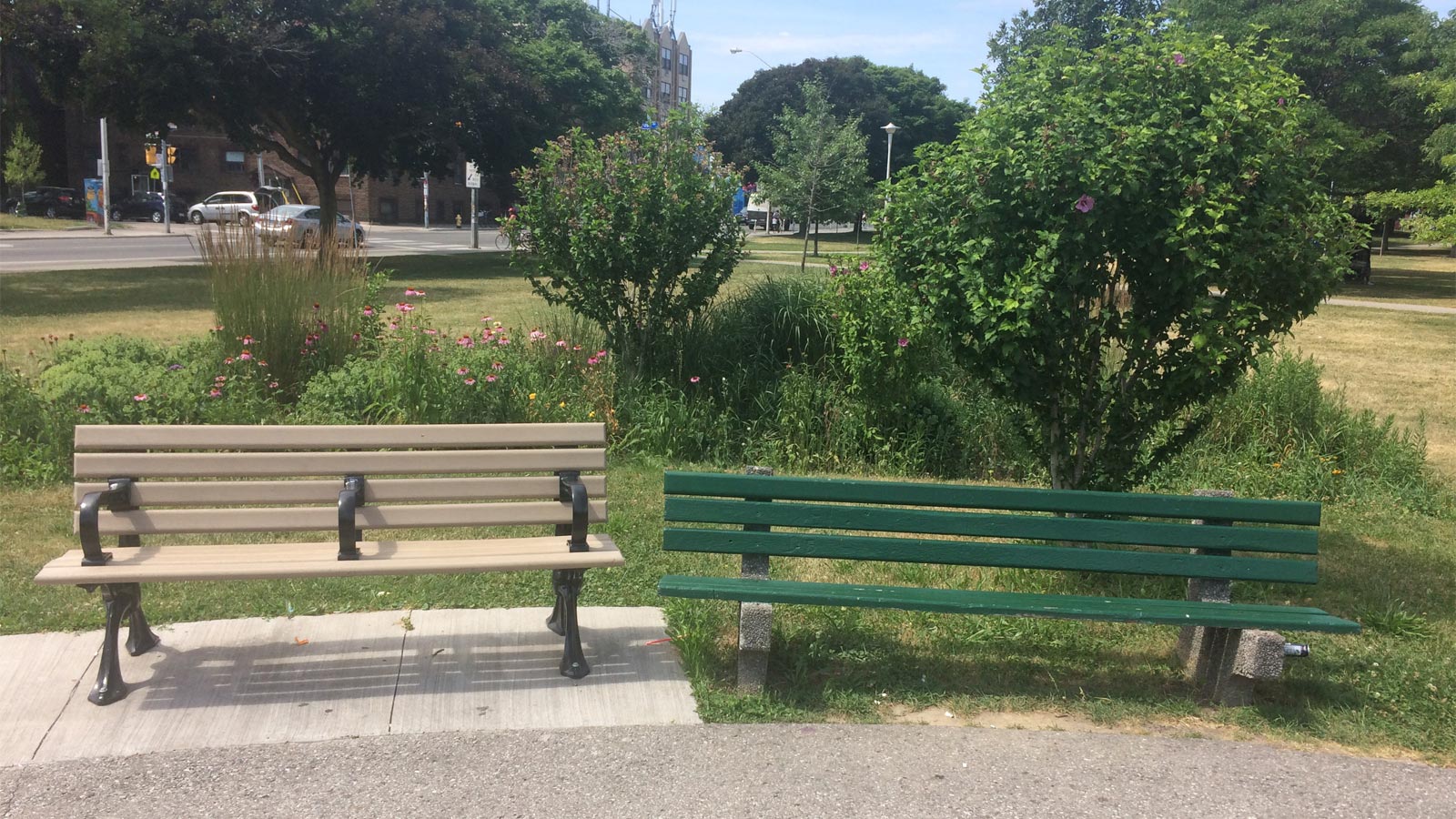 It’s not often that a piece of street furniture sparks so much controversy. In Montreal, a number of bright blue benches, divided by two centre armrests and stenciled with a COVID-inspired time limit were installed and removed in less than 24 hours in Cabot Square. An image of the bench made its rounds on social media, prompting Mayor Valérie Plante to respond, “This bench has no place in the vicinity of Cabot Square because it contributes to the stigmatization of people experiencing homelessness.”

No resting allowed at Cabot 🔲. These new benches were put up yesterday.😡 pic.twitter.com/aQG5SkdEWH

The bench expresses what is implicit in the design of defensive amenities – how to create seating that looks inviting, but that discourages you from lingering longer than 15 minutes. While the explicitly exclusive benches were removed, a city spokesperson revealed that there are no plans to do away with similarly designed benches around Cabot Square and elsewhere. “This type of bench is also in place for universal accessibility purposes,” they argued, “in order to accommodate people with reduced mobility, such as elderly people who require an armrest to sit down or to get up.”

Also known as hostile, unpleasant or exclusive architecture, defensive design practice uses the built environment to guide or restrict behaviour in urban space as a tool for preventing crime or maintaining order. It affects people who use and rely on public space the most, including those experiencing homelessness and youth, by employing design strategies to restrict “undesired” behaviours, such as sleeping in public or gathering in groups. Defensive urbanism has been around as long as we’ve had cities, but its contemporary form is often hidden or disguised as something useful. Rather than the blatant appearance of spikes on window ledges, most hostile public furniture comes off as innocuous – even useful – especially when its most salient feature is the tactically placed armrest. In Toronto, for instance, benches equipped with a central dividing bar or armrest are ubiquitous. They can be found in most parks and public spaces in the city, as documented in Mapping DefensiveTO. 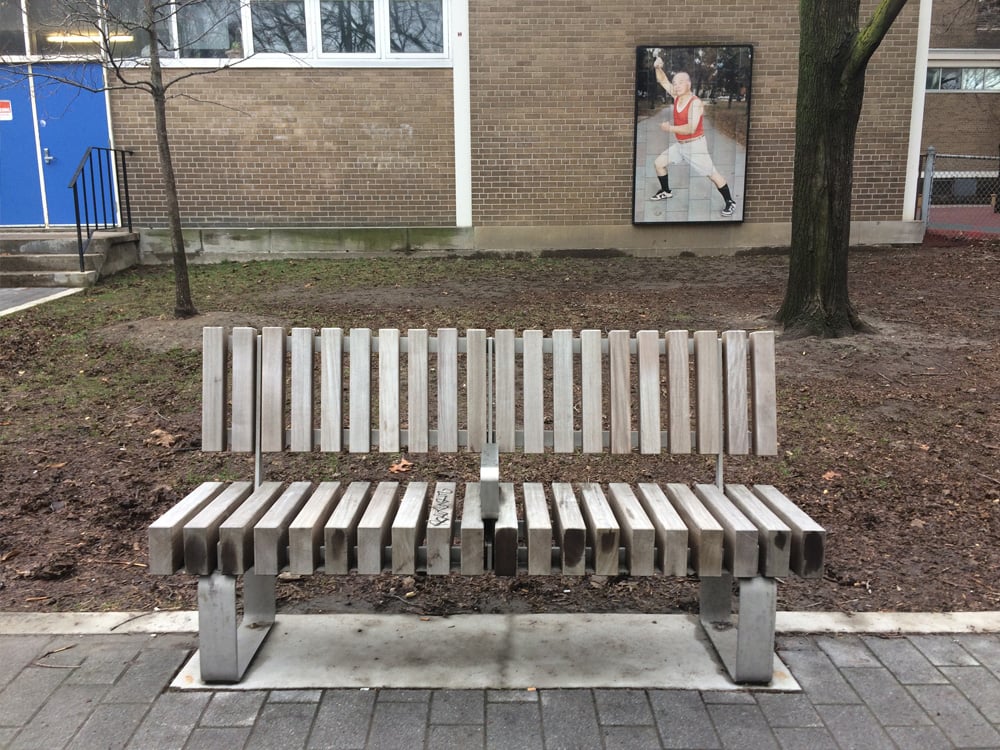 Their utility can be seen as boosting accessibility. According to Jennifer Hiseler, accessibility specialist and organizer with #a11yTO (Accessibility Toronto), additional armrests – while they stop people from lying down – might also help people with mobility impairments to sit down, balance and maneuver on and off a bench. “Having an armrest mid-way, not at the extreme end of the bench, means that somebody can [use] it from either side, so there’s some flexibility there.” This sentiment is echoed by a statement from the City of Toronto: “For some people with disabilities and seniors, two arm rests (i.e. one in middle of bench and one at side) will significantly enhance accessibility and support the person transferring into and out of the seat using both arms for support.” 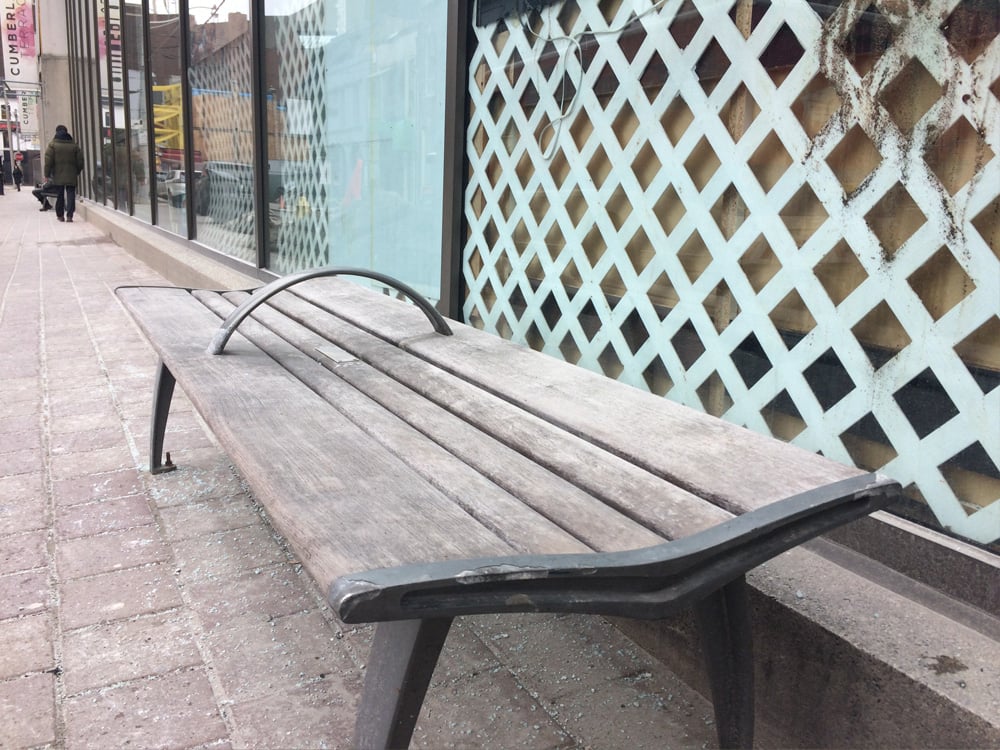 But here’s where design comes into play: There is no rule that says additional armrests must be in the geometric centre of the bench. Hiseler herself points out, “Choosing to place [the bar] exactly at the centre of the bench is an intentional act to make it so that you can’t lie down on it.” Shane Holten, accessibility consultant and president of SPH Planning & Consulting, notes that centre armrests can also reduce the seating capacity of a bench and may not address the needs of users of all ages and abilities. “Being too prescriptive could impact design as well. Whenever seating is provided, consultation with diverse user groups is very important.” 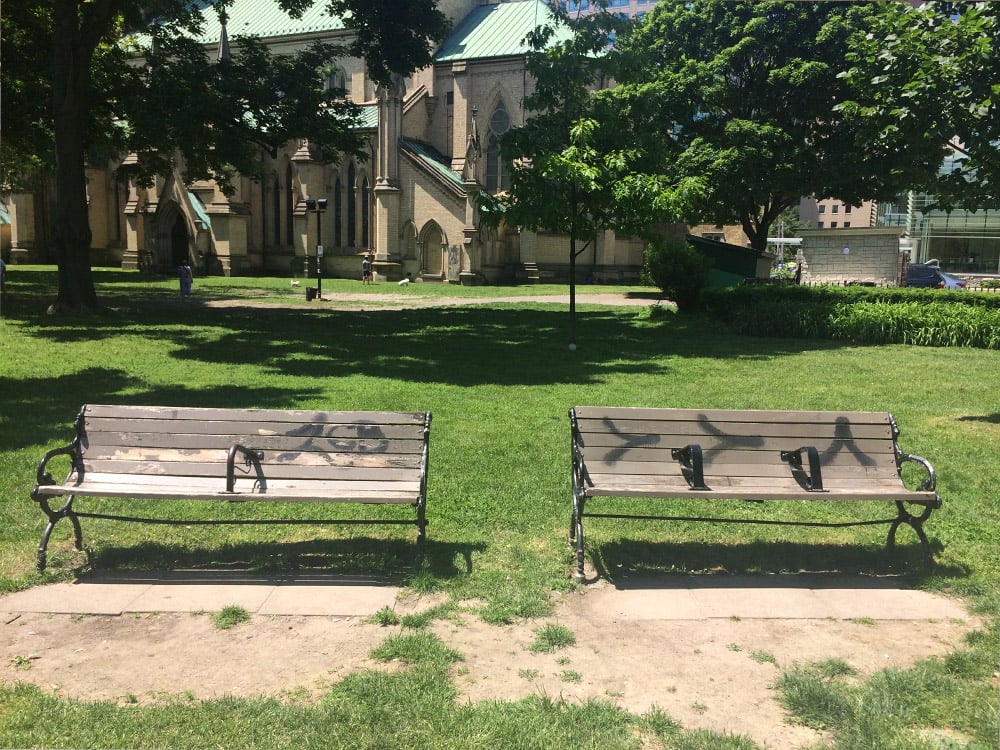 This is where intention becomes a driving force in design. According to Hiseler, “An indicator if somebody genuinely cares about accessibility or is genuinely committed to it would be [to make sure] the bench and space meets the other requirements for accessibility.” These other requirements include: ensuring the bench is installed on a firm, stable base; access to the bench is provided through a barrier-free path; colour contrast is provided between the bench and the armrest; and extra space is included around the bench to accommodate mobility devices and service animals. 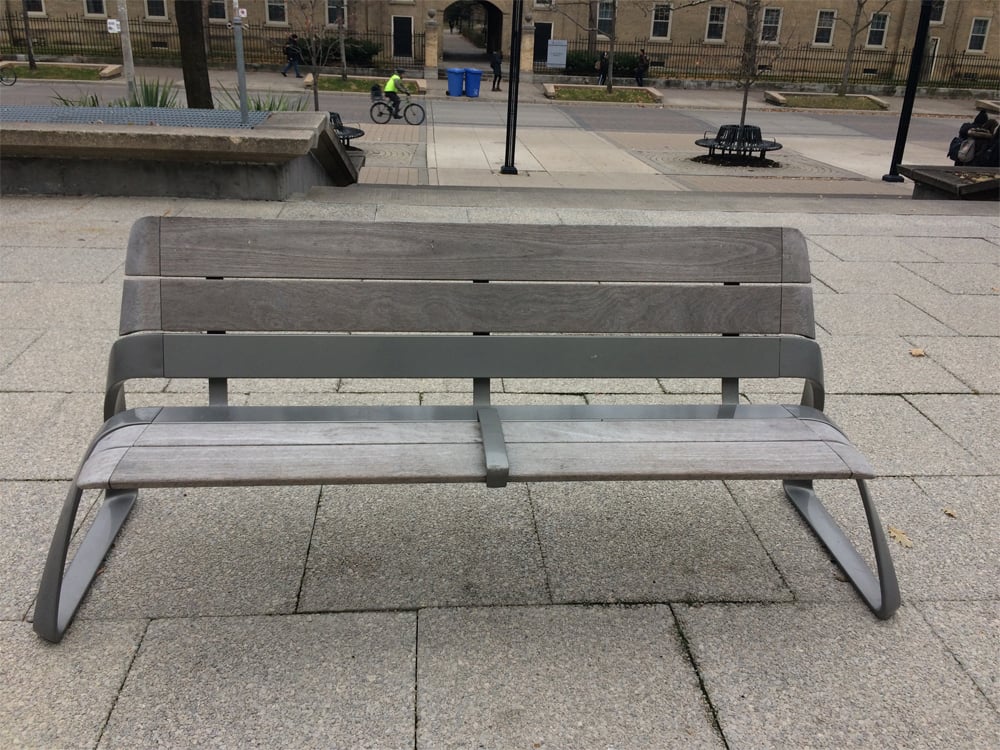 Another consideration is defining exactly what counts as an armrest. “Armrests that are not 150-300 mm above the height of the seat may not provide the support they are meant to provide,” says Thea Kurdi, ­­­ accessibility specialist and vice president at DesignABLE Environments. “If armrests are too low, they can be a barrier to accessibility, especially if they are not colour contrasted and people accidentally sit on them.”

It’s possible to use accessibility in bad faith. “Urban design is not neutral,” writes Jay Pitter, an award-nominated author and placemaker who recently released A Call to Courage: An Open Letter to Canadian Urbanists. “It either perpetuates or reduces social inequities.” In the case of the armrest, it has been weaponized against other groups. Liv Mendelsohn, director of accessibility and inclusion at the Miles Nadal Jewish Community Centre, explains, “Using the language of accessibility to forward exclusionary design is a kind of ‘access-washing.’ It’s especially egregious when you consider people who are homeless (who presumably are the focus of the exclusion) are more likely to have disabilities.” 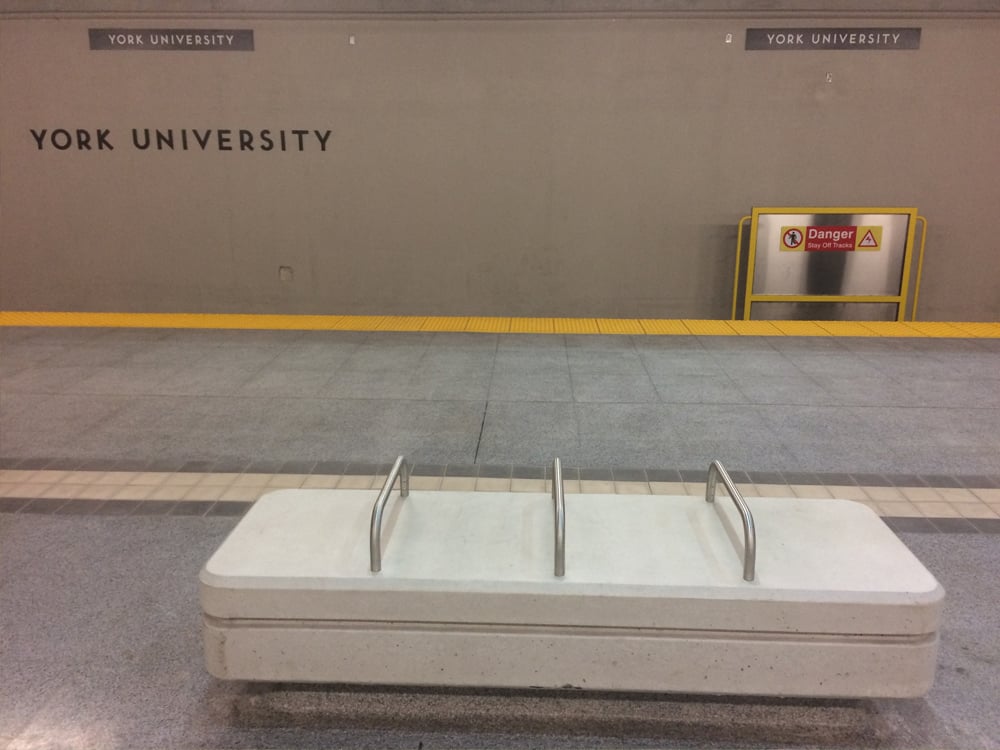 While there are currently no guidelines that regulate defensive architecture in Toronto, some cities have developed best practices that outline for how far apart armrests should be. For example, the Town of Oakville’s design standards include acceptable ranges for seat heights, depths and widths. Other municipalities, like the City of Port Moody in Greater Vancouver, are considering policies and implementing bylaws that prohibit the use of hostile architecture in public and private spaces.

“These defensive architectural practices are shameful, and it perpetuates a class system for comfort. They also mask the real issue here – people need homes to sleep in,” explains Reza Nik, an architect, artist, and educator whose practice, SHEEEP, works through an equitable lens. “No one wants to sleep on a bench – but by introducing barriers for those who don’t have a choice, we’re not really helping the situation; we’re further stigmatizing them instead of focusing our energy on addressing the deeper questions here.”

Given that accessibility has been used to justify the exclusion of groups of people through defensive architecture, what can we do to ensure that our public spaces are inclusive and welcoming to all? 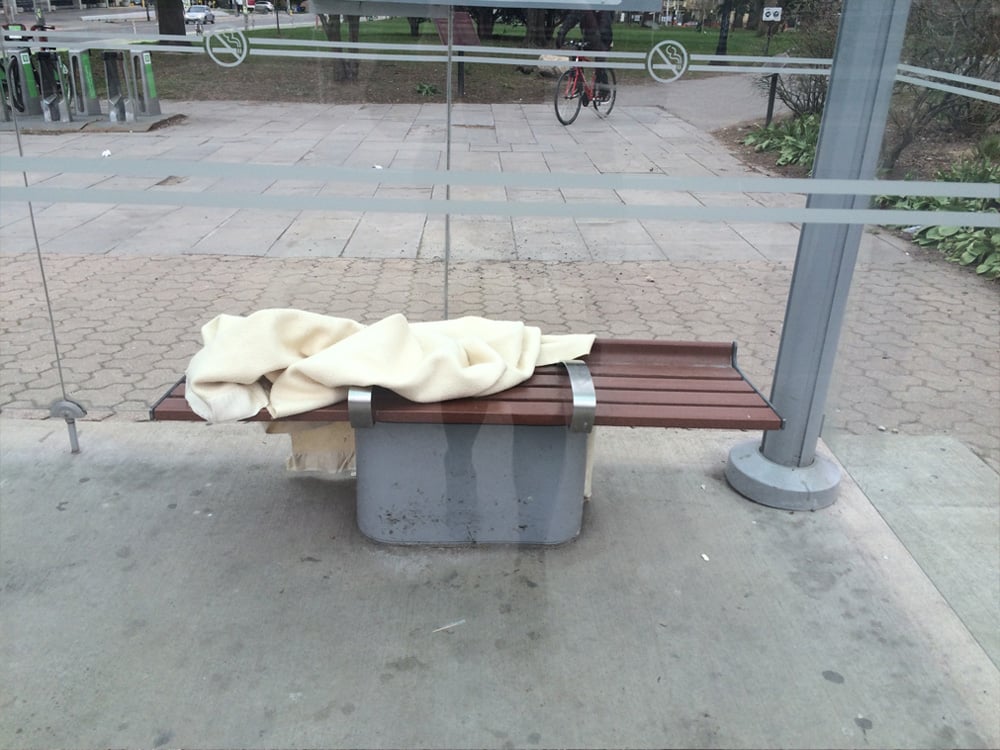 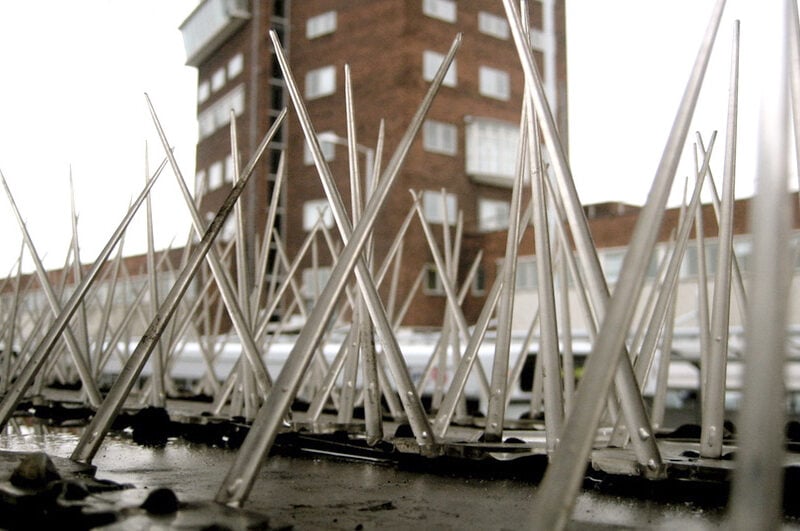 In addition to introducing policies and bylaws that prohibit the use of hostile architecture, we need to champion clear design guidelines that define what counts as an armrest. This could be a range, as it appears in other accessibility design standards. Not only is clarity in design requirements helpful for manufacturers and designers, predictable and consistent design is better for people with disabilities.

It’s time to challenge pre-existing assumptions when it comes to this design detail that has a huge impact. Additional armrests don’t have to be positioned in the geometric centre of the bench. They can be installed mid-way, providing support to those who need it, while still allowing people to lie down. Benches can be longer, and we can include more of them rather than choosing between accessibility and creating a place where people can genuinely rest. Finally, as Nik points out, “If we don’t design, or draw the things which are harmful, it will be harder for them to exist – but as long as we’re complicit, they will continue.”

Cara Chellew is a public space researcher, writer, and founder of #defensiveTO an online project that documents defensive urbanism in Toronto and beyond.