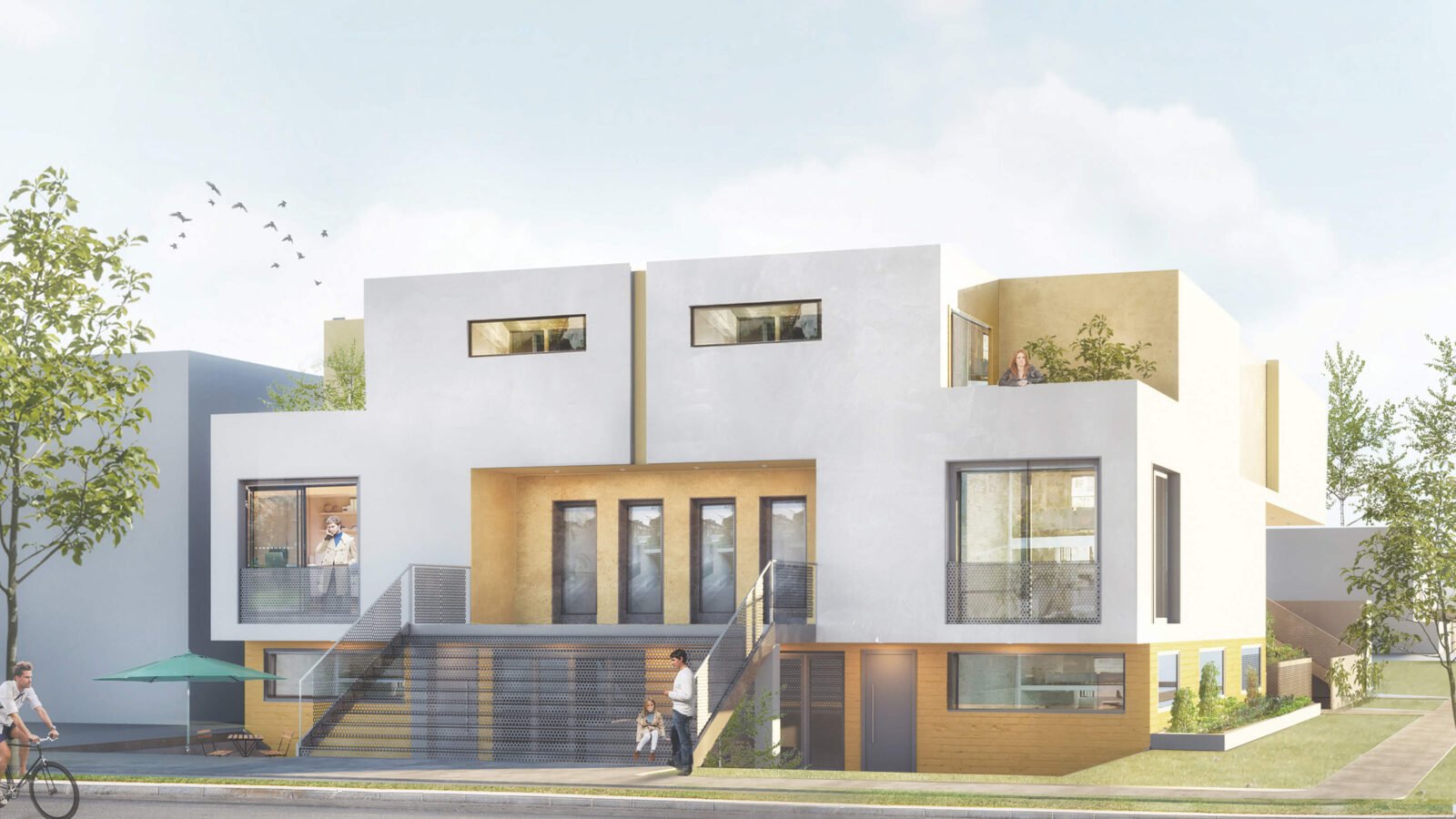 In an excerpt from the new book House Divided, Workshop Architecture’s Helena Grdadolnik shares the lessons of the “Extra Special” missing middle typology.

In 2018, our studio, Workshop Architecture, entered the Missing Middle Competition, run by Urbanarium, a Vancouver-based nonprofit. The organization’s goal was to generate discussion about how middle-density dwellings could contribute to affordable housing in the Greater Vancouver region.

Our proposal built on the success of the “Vancouver Special” housing type – a low-cost house design prevalent in the region since the 1970s, whose form was developed as a direct expression of the maximization of existing zoning bylaws. These houses are reasonably big – about 2,400 square feet over two levels – with the main living areas on the second floor and often a secondary unit on the main floor.

Our design proposal is a mash-up of the Vancouver Special with Brooklyn brownstones and Chinese courtyard houses, resulting in a typology we call “Extra Special.” This form provides options for living in a residential neighbourhood – a missing middle between the single-family house and a condo or apartment home.

In the mid-twentieth century, Toronto didn’t develop a housing type equivalent to the Vancouver Special, a design that maximized its zoning envelope and was intended for multiple families. The Victorian and Edwardian semi-detached house was joined, in the inner suburbs, by low-density, single-family houses.

Although our design proposal doesn’t fit perfectly on Toronto sites, the general approach, if allowed, through zoning regulations, would increase housing options and introduce flexibility in living arrangements in the city by combining two or three single-family residential lots, with a resulting increase in dwelling units and building area.

In our Vancouver submission, we proposed the creation of a new zoning category for corner sites called “Residential Extra.” It would apply when two lots adjacent to a street corner are combined to create a lot at least fifty feet wide. In many areas in Toronto, three lots would be required to achieve the same minimum width. On such a site, we proposed an increase in the number of dwelling units allowed from two to nine, and permission for larger buildings that covered more of the lot. In this way, we added more flexibility in dwelling types, sizes, and ownership options: condos, co-operatives, co-housing, or rentals. With streets on two sides and a laneway, the corner sites allow for easier access to multiple dwellings. And as there is only one immediate neighbour, Extra Specials would have very little privacy impact on the existing or new dwellings.

The Extra Special dwelling encourages sociability in the form of a stoop and shared courtyard, but careful positioning of windows also lends privacy, while each unit has its own dedicated outdoor space. 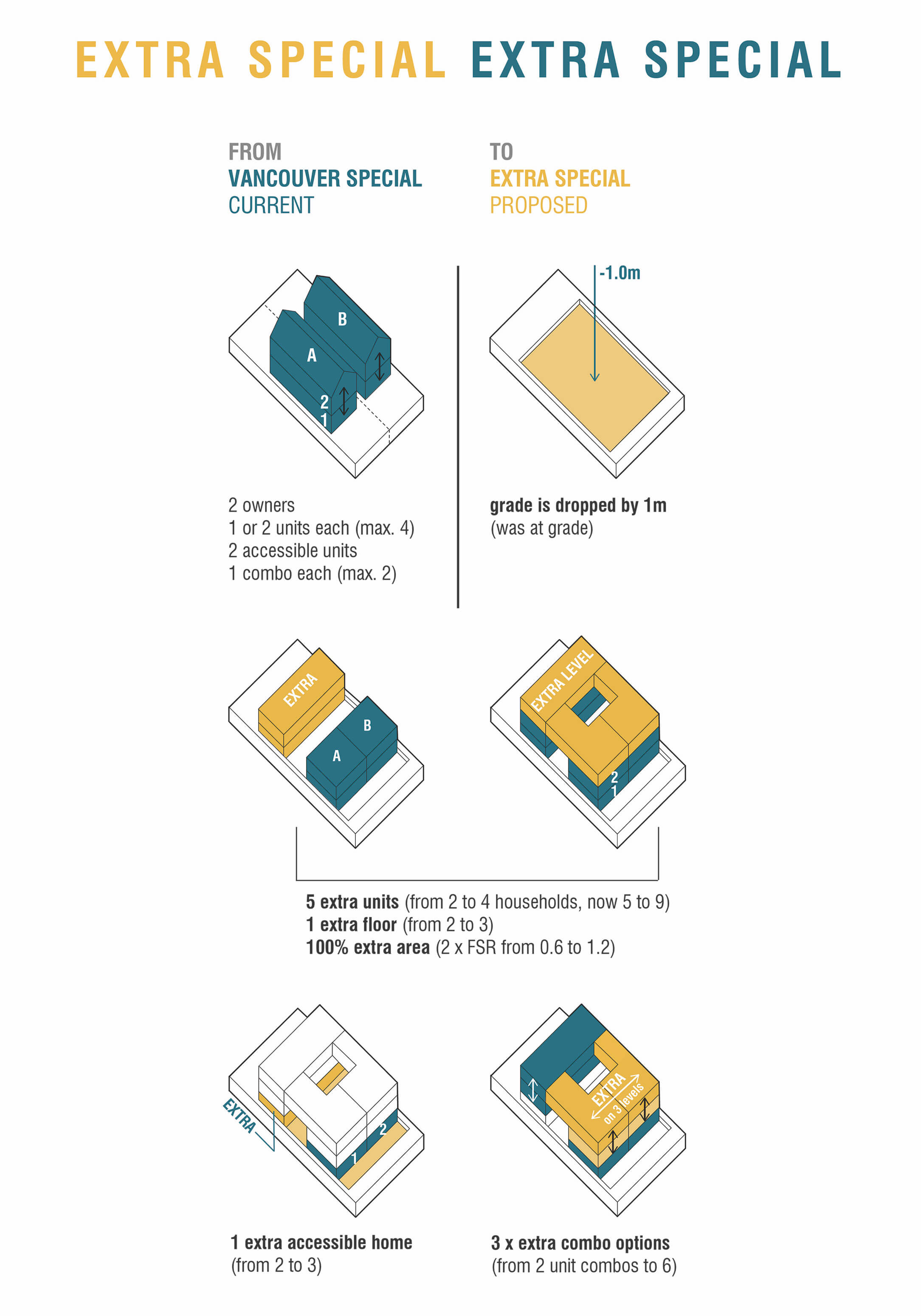 The Extra Special design was developed from the inside out to ensure livable spaces with outdoor connections. A garden-level pass through and courtyard brings more sunlight from the south into the homes and makes the garden-level units accessible. The composition of the exterior facade hints at the potential for linking units, both vertically and horizontally.

The living spaces in the Extra Special design are more generous than typical condominiums or even town homes, providing family-sized spaces that also can support different cultural traditions and living arrangements.

The Extra Special building form also unlocks multiple ownership combinations that range from one multi-generational household living on-site to six owners and three secondary suites. Unit combinations range from nine separate households, in one- to three-bedroom homes, to three households with three to eight bedrooms each.

The range of unit sizes and the ability to combine them in multiple ways in the Extra Special design provides market choice, tenure options, and the flexibility to meet the changing needs of a multigenerational or “found” family, and for co-living between seniors or single people. This flexibility provides social benefits, but also economic benefits: elder care and child care are significant costs in urban areas and sharing meal prep can help with busy schedules. None of this is new; these ideas reflect how the Vancouver Special, the brownstone, and siheyuan, a Chinese residential compound form, have been used over many generations.

First-floor overhangs and second-floor patio spaces were successful elements that we borrowed from the Vancouver Special. We also kept the front door and stair configuration, which allows the two top floors to be connected into one larger home, or for individual access to two separate homes. The Brooklyn brownstone has also been successful in adapting over time to changing needs, from larger dwelling units to apartments and back. For the Extra Special design, we borrowed the brownstone’s stoop – the tall front stairs that serve as a gathering place – and how it tucked the front entrance to the garden level under the stairs. 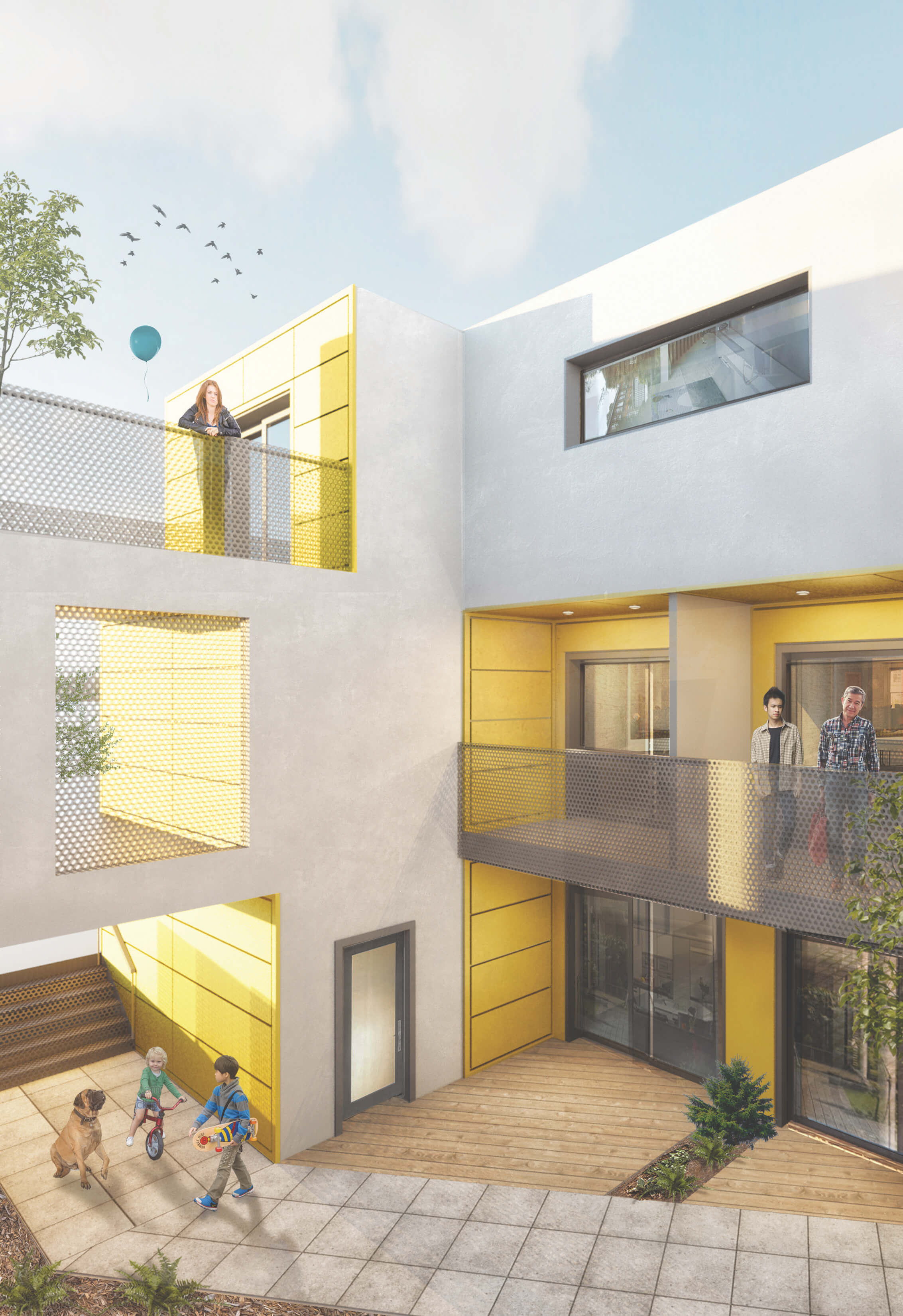 The back entrance of the Extra Special is a walkout at the same level as the back courtyard, just like in the brownstone. A drop-off in ground level at the front of the building defines a private patio space near the street and keeps neighbours away from the front windows. This patio does not block sunlight from entering the lower-level windows because grating is used instead of a solid deck surface. 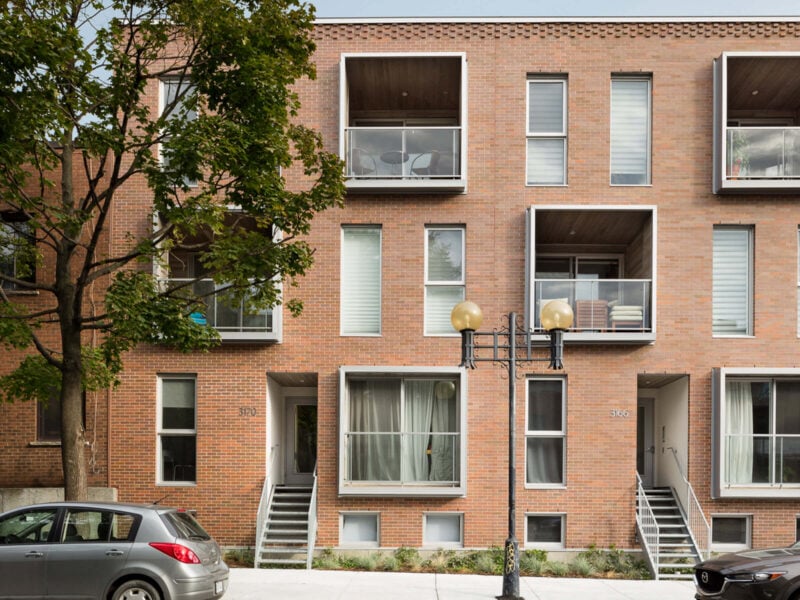 Building Form is not Enough

In Urbanarium’s Missing Middle Competition, an important goal was housing affordability. We developed a building form and new zoning rules to answer the competition challenge, but affordability is relative. In Vancouver’s inflated market, Extra Special units would not be low-cost, but they could be within reach for families who are able to co-develop a site together. In Toronto and Vancouver, the goal should be to maintain a home’s affordability in the longer term; new “missing middle” zoning categories could increase speculation and land costs, so they should be available only for co-operative or non-profit developments,to incentivize affordable housing and shared ownership models.

It’s time to encourage innovation in design forms that are the middle ground between a house and a tower. But, to achieve lasting affordability, we also need to implement policies that break the cycle of land speculation in home ownership.

In an excerpt from the new book House Divided, Workshop Architecture’s Helena Grdadolnik shares the lessons of the “Extra Special” missing middle typology.